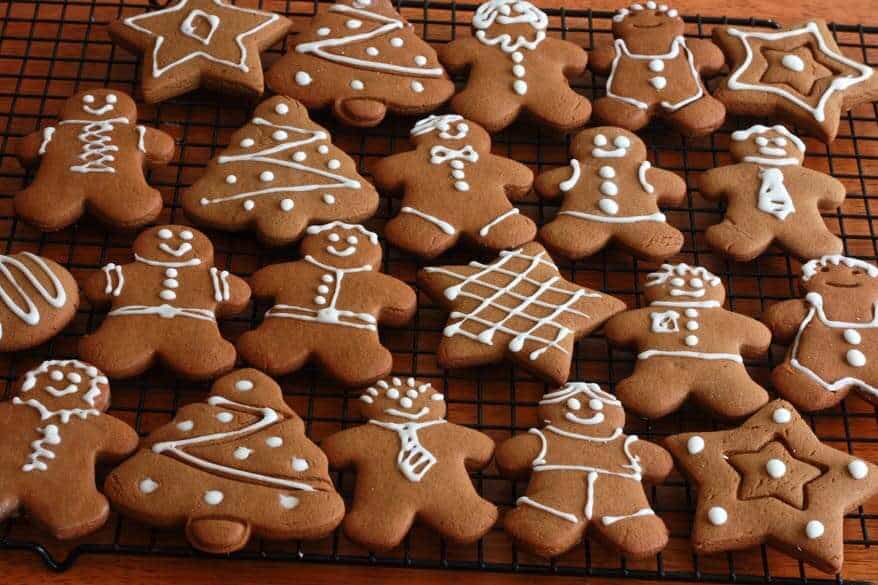 Classic Gingerbread Cookies.  There’s a reason why these have been a Christmas tradition for eons.  They’re so much fun to make!

Gingerbread has been around forever.  Historical documents indicate that it was originally brought to France by an Armenian monk, Gregory of Nicopolis, in 992 AD.  While in France he taught the French priests how to make gingerbread.  The tradition continued and spread to Germany.  German immigrants then brought the recipe with them to Sweden in the 13th century.  There are early references to Swedish nuns in the 15th century baking and eating gingerbread on a regularly basis to ease digestion.  Personally, I think that was just a ready excuse to justify the sin of sugary indulgence!  Can’t you just picture it:  “Honestly, Reverend Mother, I’m not eating it for worldly pleasure, it’s merely to ease my indigestion.”

Whereas gingerbread in cake form has been around since at least 10th century, the first documented gingerbread cookies are placed in the 17th century.  They were believed to have medicinal properties (the myth perpetuated by those sweet-toothed Swedish nuns spread far and wide!) and were sold in monasteries and pharmacies throughout Medieval England.  By the 18th century gingerbread cookies were common throughout every household and it became popular to paint them and use them as window decorations.  Gingerbread cookies remain a popular and beloved tradition today.

So don’t be afraid to reach for a second, third, even fourth cookie…it’s purely to relieve your indigestion, right?

Print
: The Daring Gourmet, www.daringgourmet.com
Ingredients
Instructions
Notes
The key to successful gingerbread cookies lies in chilling the dough in the refrigerator overnight. The correct consistency of the dough should be very stiff and even slightly crumbly. When you roll it out (1/4 inch thick), the edges may be split and a little crumbly, so cut from the center, pick up the scraps, put them back in a ball, flatten into a disk and put them back in the fridge to chill before re-rolling and cutting.
3.2.2199
50 shares
« Mu Shu Pork Wraps
Herb Roasted Potato Wedges »