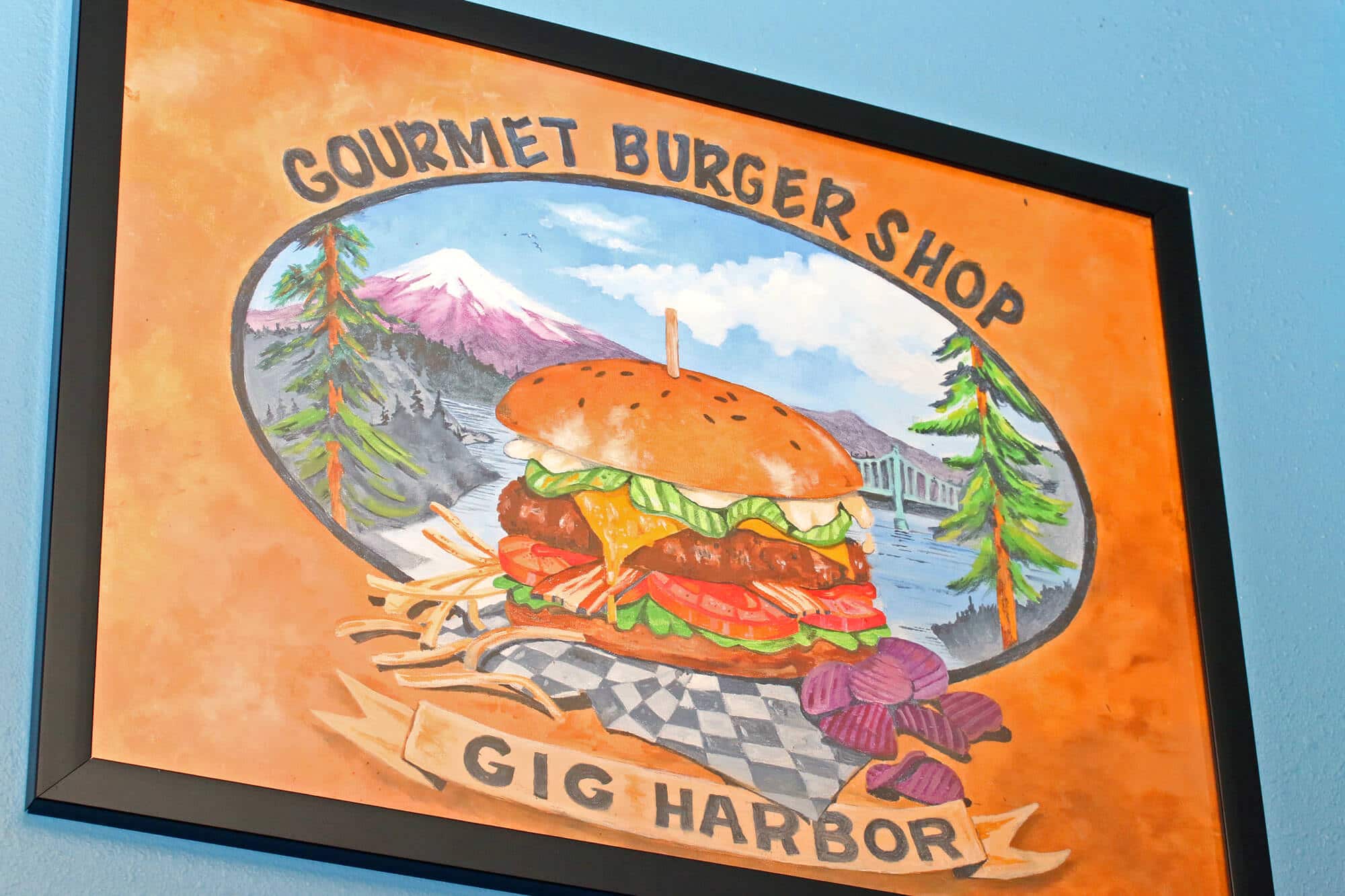 This isn’t your typical burger shop.  In a culture where advertising isn’t always what it seems and the pictures don’t always reflect what you get, in this case they really did get it right:  These burgers are gourmet.

The moment we took our first bite it was evident that these burgers are made with quality ingredients.  The meat has a better texture and flavor and is accompanied by fresh ingredients like thick-cut crisp tomatoes and a variety of leafy greens.  Other touches that stand out are the locally made hamburger buns baked fresh daily, aged Tillamook cheddar, quality gorgonzola and the thickest-cut bacon you’ve ever seen on a burger.

The Gourmet Burger Shop was recently rated by the Tacoma News Tribune as having the best cheeseburger in Pierce County and they were one of the top two for best milkshake, fries and onion rings.

The owner, Travis Hightower, worked as a chef at some private golf courses before opening his first burger shop in 2010, serving upscale burgers in a tiny hole-in-the-wall off a roadside on the Key Peninsula.  He opened his doors with the expectation of flipping maybe 50 burgers a day but soon found himself flipping four times that amount.  And if you’ve tried his burgers you’ll understand why. 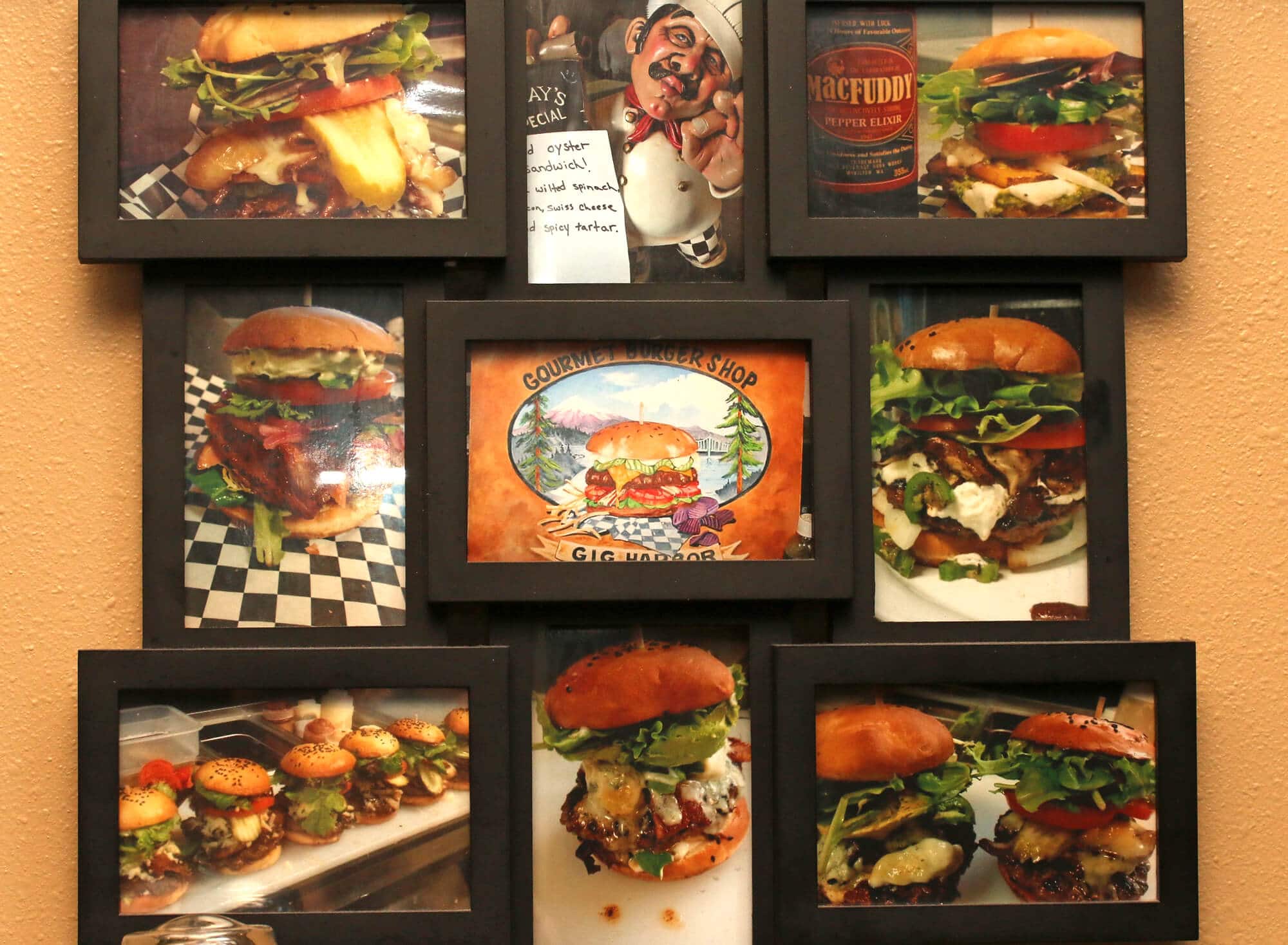 Though commercial real estate is extremely limited, especially along the waterfront, two years ago Travis relocated to historic downtown Gig Harbor to a bigger, though still small, place on Harborview Drive across from the water.

It was the location of the former Le Bistro that burned down in 2010 and just so happens to be the place of our very first restaurant meal ever when Todd and I were dating.  (I hope our presence didn’t have anything to do with the fire!)

When the doors of Travis’ new place opened in 2013 the crowds poured in and business has continued as word of his gourmet burgers spread throughout the South Sound and beyond. 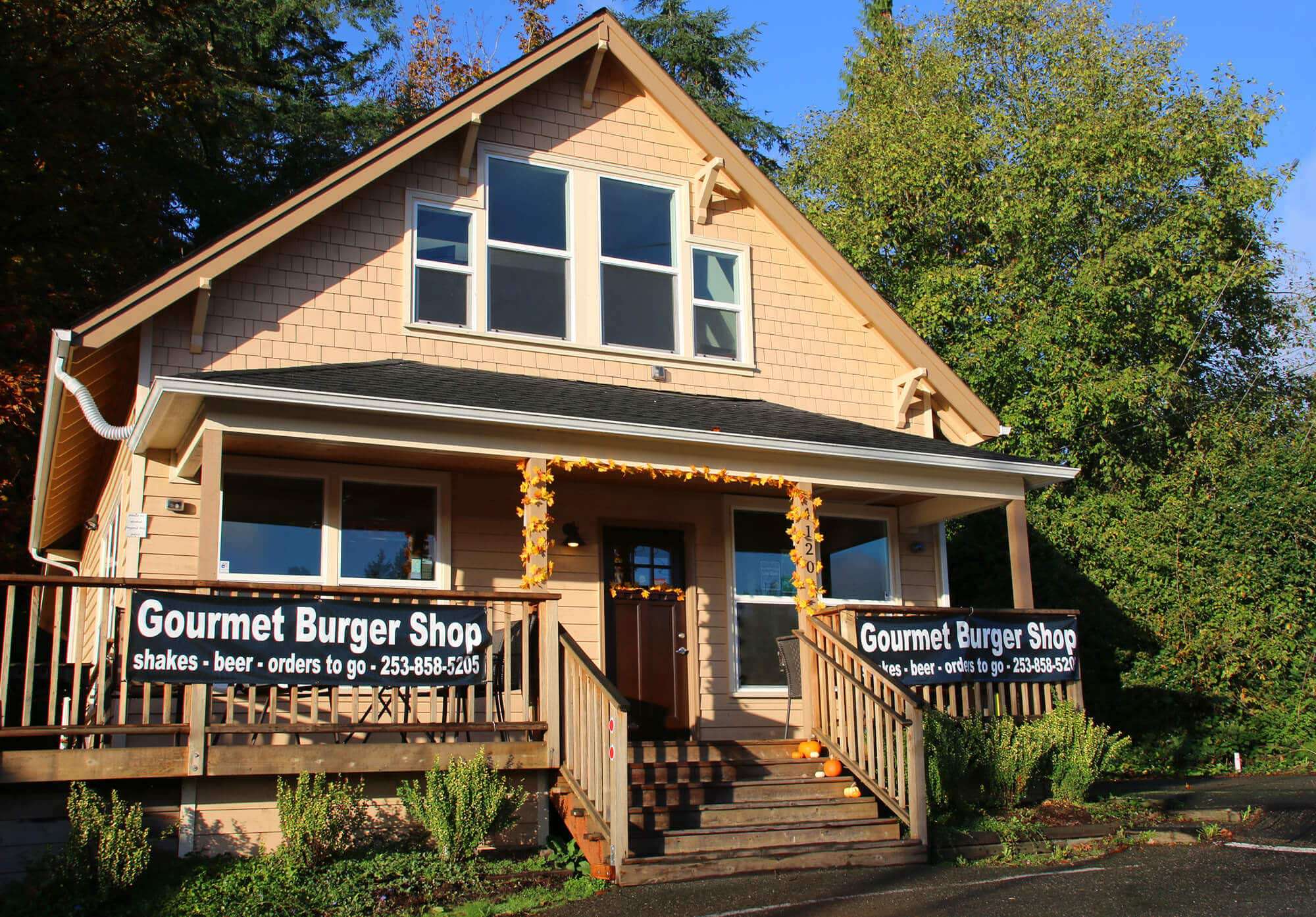 What’s particularly remarkable to me is the amount of food they produce within such a small kitchen.  Some days they cook up over 200 burger baskets on just a 24×24 inch grill and one deep fryer!

I don’t know how they do it, but their service is fast and the food is fresh.

The menu offers a nice selection of burgers along with soup, salad and some seafood options like fried oysters and crab cakes.  And I hear they make an excellent veggie burger.

The burgers are more expensive than what you’ll find at a fast food joint, but less expensive than burgers of comparable quality at a sit-down restaurant.  The flavors are bold and the sides are fun:  Shoestring garlic-herb fries, the crunchiest onions rings you’ve had and crispy beet chips. 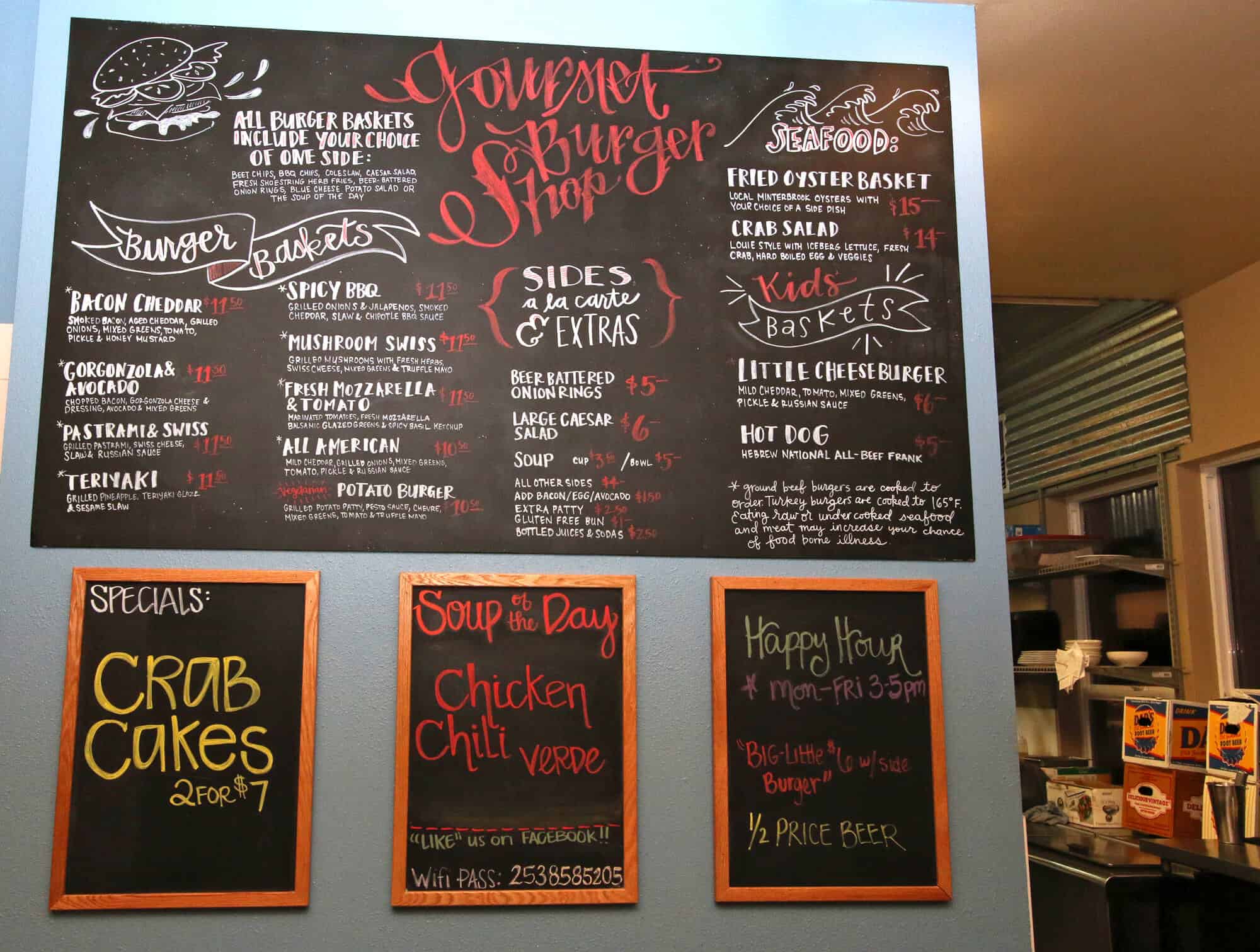 For your sweet tooth they offer a delicious variety of shakes made with real ice cream.

And I’ll tell you what, it’s worth making a trip here just for the shakes! 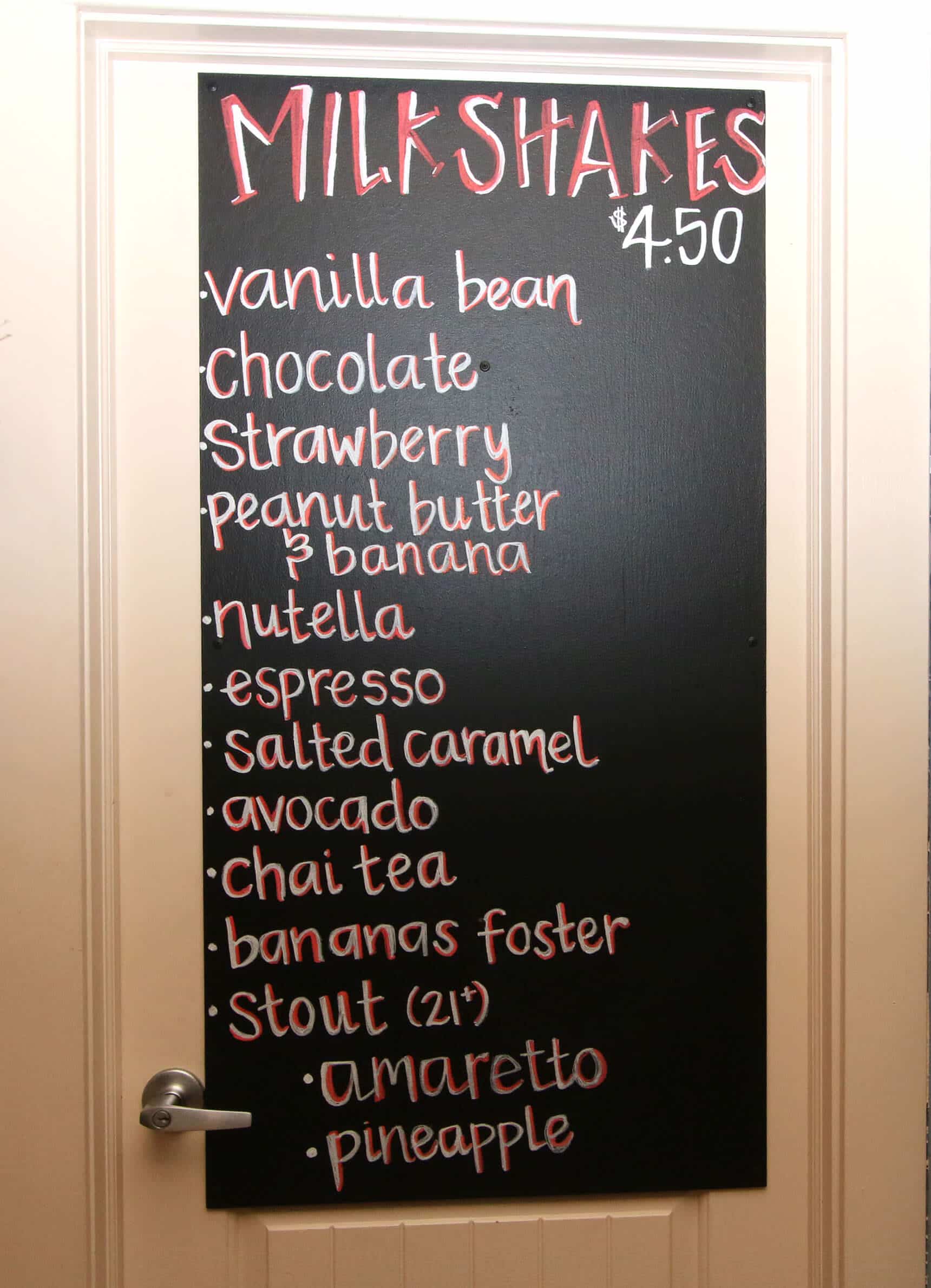 The atmosphere is laid back and cozy with only a few tables and a capacity of around 25.  We came on a weekday evening and had no problem finding a table around 6:30pm but before long things filled up.  I can only imagine how packed the weekends get, but they also do To-Go orders.

The place is clean and tastefully decorated and service is prompt and friendly. 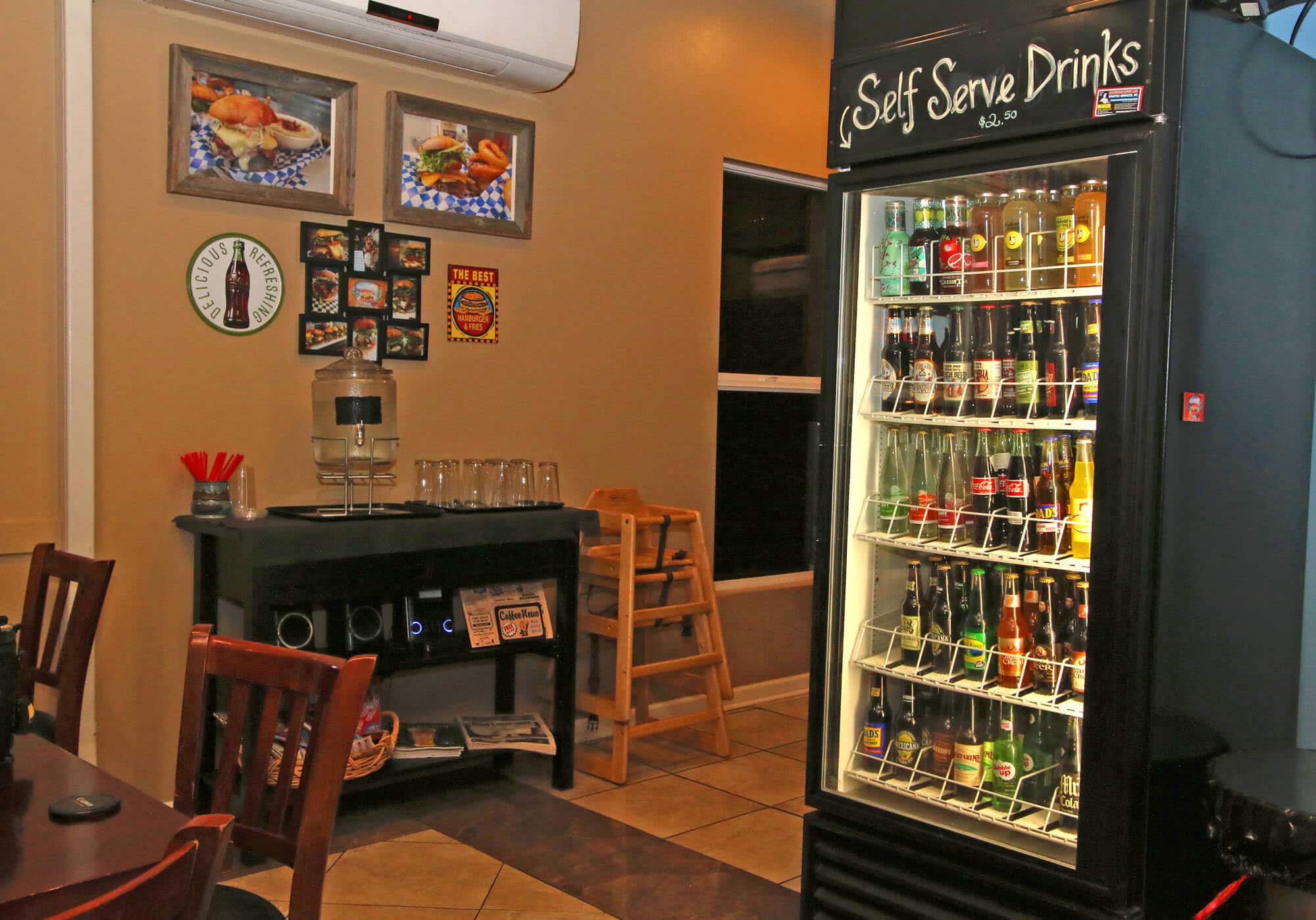 Our burgers came quickly and were hot and fresh.  The patties were generous in size and I’d say our burgers were both close to 1/3 of a pound.  I ordered the Gorgonzola & Avocado Burger and Todd had the Teriyaki Burger with grilled pineapple and sesame slaw.  The flavors were rich and delicious.  As I mentioned before, the beef had a nice texture and flavor and the accompanying veggies were very fresh.

My only recommendation would be that they convince the local bakery to make the hamburger buns a bit bigger.  The buns are a little on the small side which made eating the burgers a bit tricky, but it didn’t take away from their enjoyment. 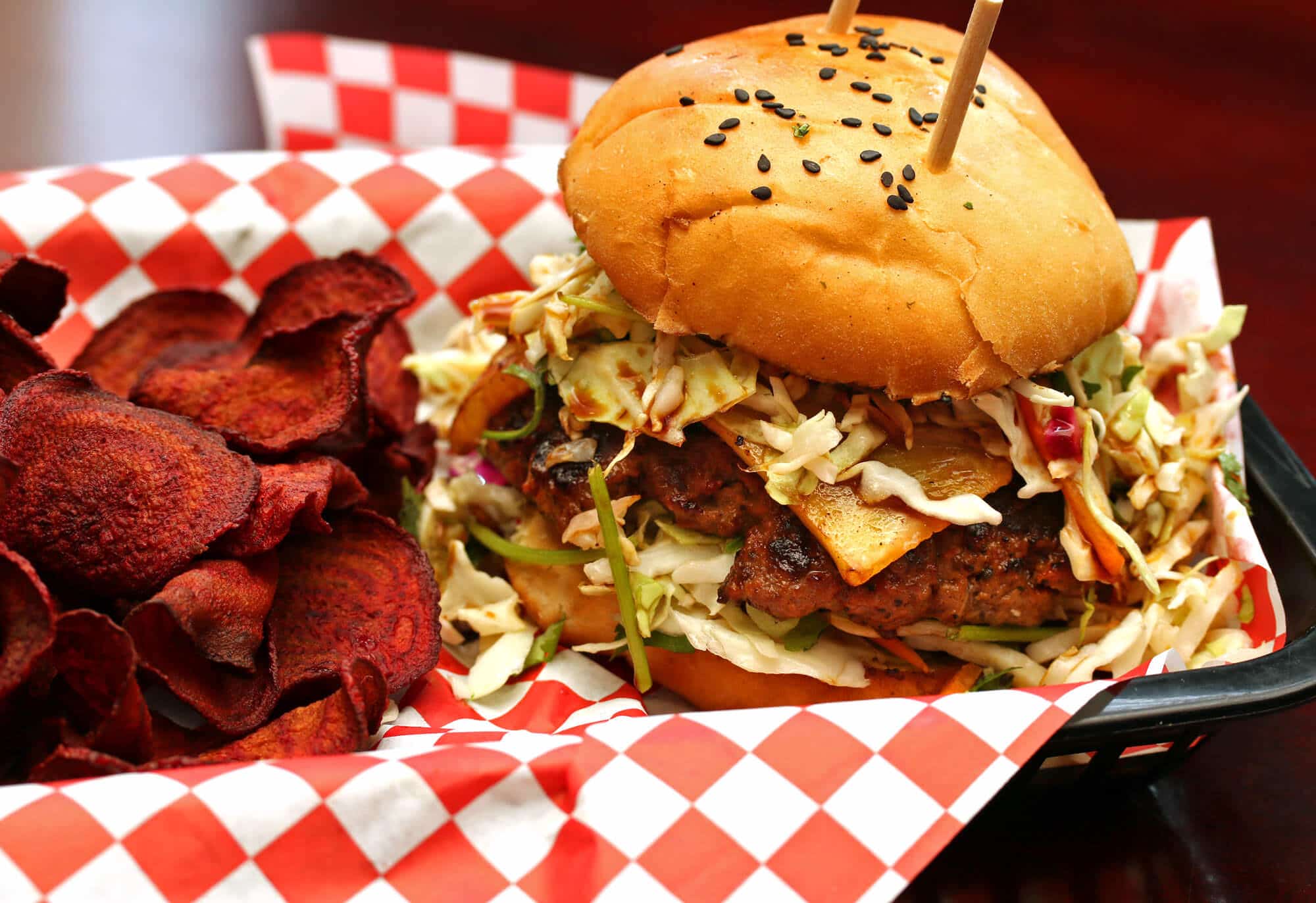 And unlike every other burger I’ve had that supposedly comes with avocado but ends up being a paper-thin slice (make that half a slice), this burger came with a super generous amount of both avocado and gorgonzola.  Check it out! 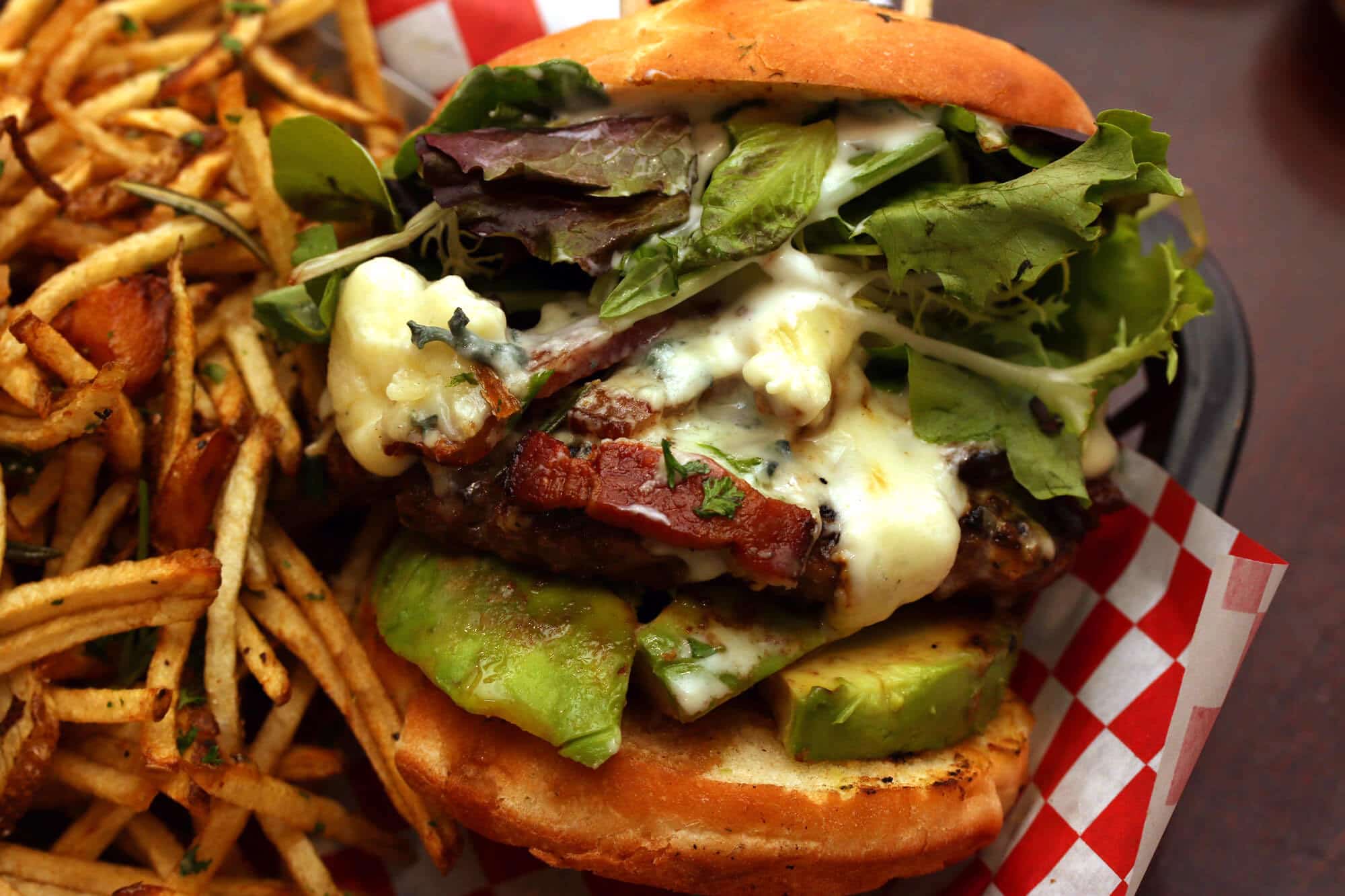 I ordered my burger with their Garlic-herb Shoestring Fries and we wanted to try their beet chips, so Todd ordered those with his.  Seriously, if your kids won’t eat beets the regular way, they’re sure to love these!  Perfectly crunchy, the beet chips were a nice change from your typical fries.

But typical fries aren’t what you’ll find here either.  For one thing they’re shoestring, which is just plain FUN.  And mixed in with the fries were also whole cloves of roasted garlic and lots of fresh thyme and rosemary leaves.

And of course we had to try their onion rings.  Oh, the onion rings!  If I were to ever write a love poem about onion rings (and I wouldn’t entirely count that out) these would surely be the inspiration.

For perfect crispiness these onion rings are hands down THE best we’ve had.  Period.  The coating…amazing.  It’s so crispy it gently shatters between your teeth but still has a nice chewiness underneath.  I complimented them on their onion rings and they said their secret is using a really malty beer. For texture it is the best batter we’ve had outside the UK.  Todd and I both, independent of each other, lived in England for several years and we both agree that nothing beats English fish and chips.  They’ve mastered getting the batter just right.

And so has The Gourmet Burger Shop.  We were so elated with the batter we pulled the staff aside and told them with a batter like this they could be making the best fish and chips in the Pacific Northwest.  Well, it turns out they do make them occasionally, but they’re not a consistent feature on their menu.  My suggestion:  They need to be!  And the next time they serve it, we’ll be the first ones in to enjoy it!

Back to the onion rings:  Served with a variety of sauces, including their house White Truffle Mayonnaise, you don’t want to miss out on these! 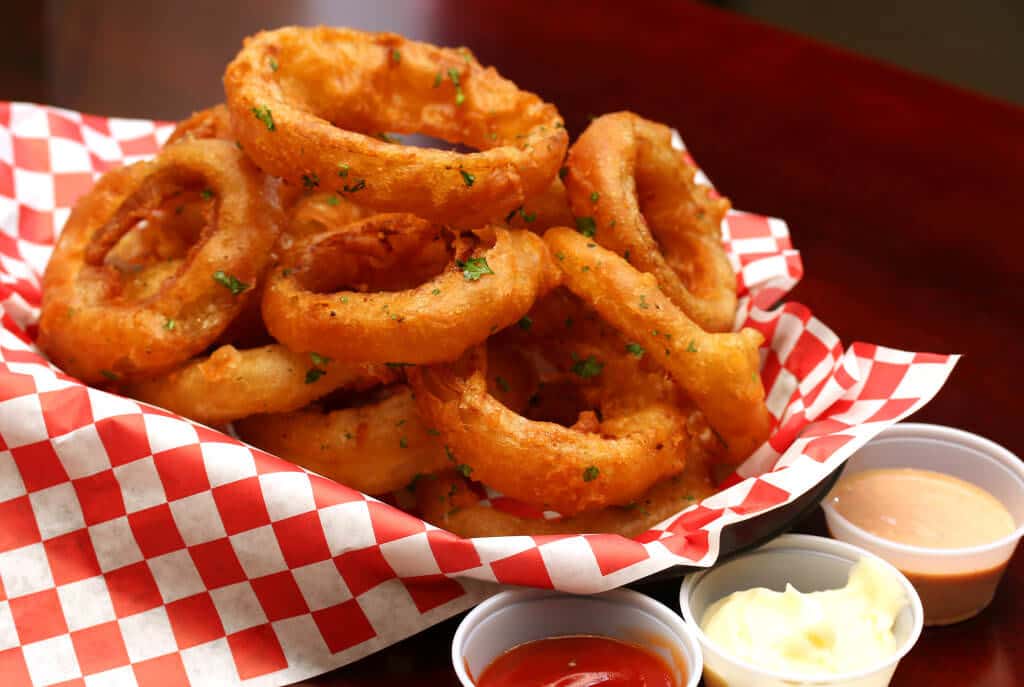 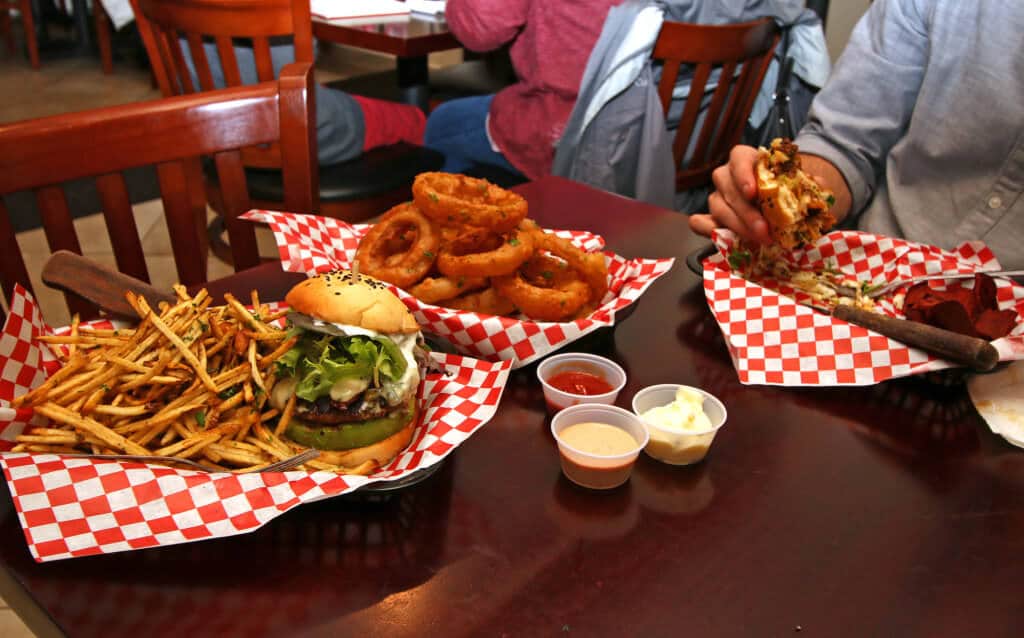 By the time were done we were full, but we couldn’t pass up a milkshake and we had just enough room for one.

The two flavors that really grabbed our attention were Nutella (of course) and Bananas Foster.  The Nutella had a far richer hazelnut flavor than I’ve ever tasted in plain Nutella, but they said they didn’t add anything extra.  But somehow these shakes sure brought out the flavor.  And the bananas foster milkshake was equally delicious.  The vanilla flavor was exceptional – they use a vanilla bean paste – and the touch of cinnamon added depth and warmth.  Both milkshakes really were fabulous! 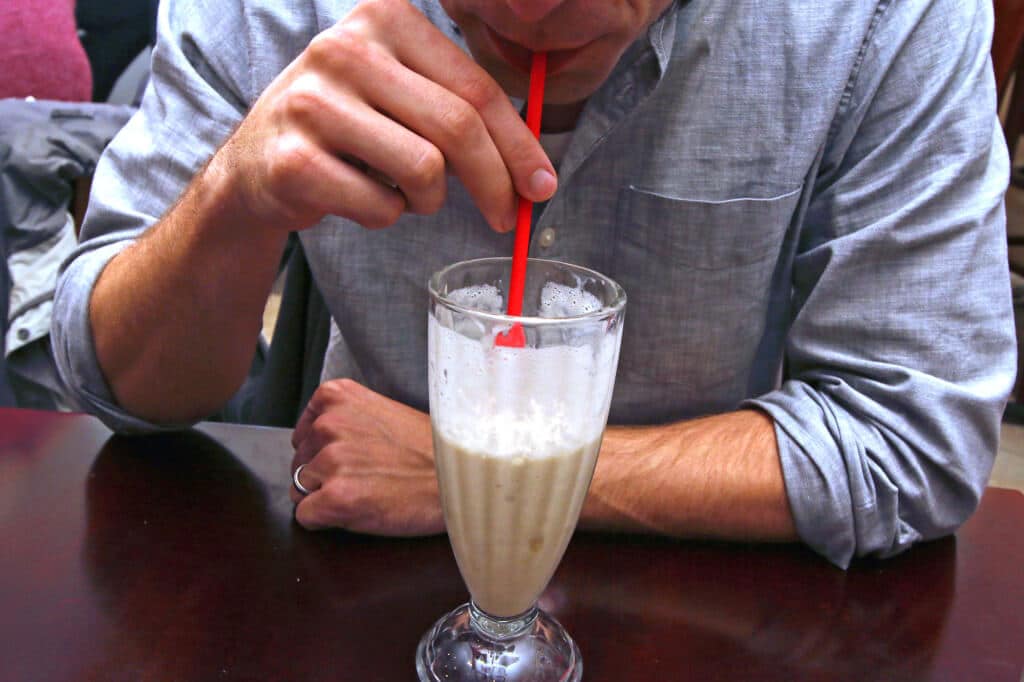 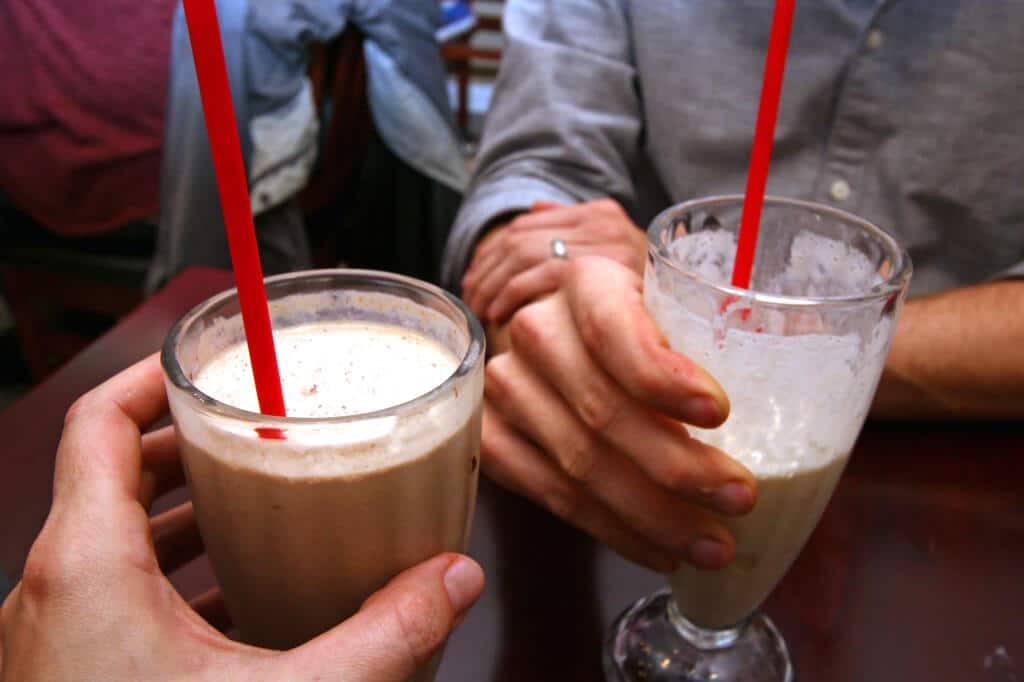 If you’re looking for a quality, gourmet burger with terrific sides, the crunchiest onions rings you’ve ever had, and milkshakes that will satisfy the most discerning sweet tooth, this is the place. 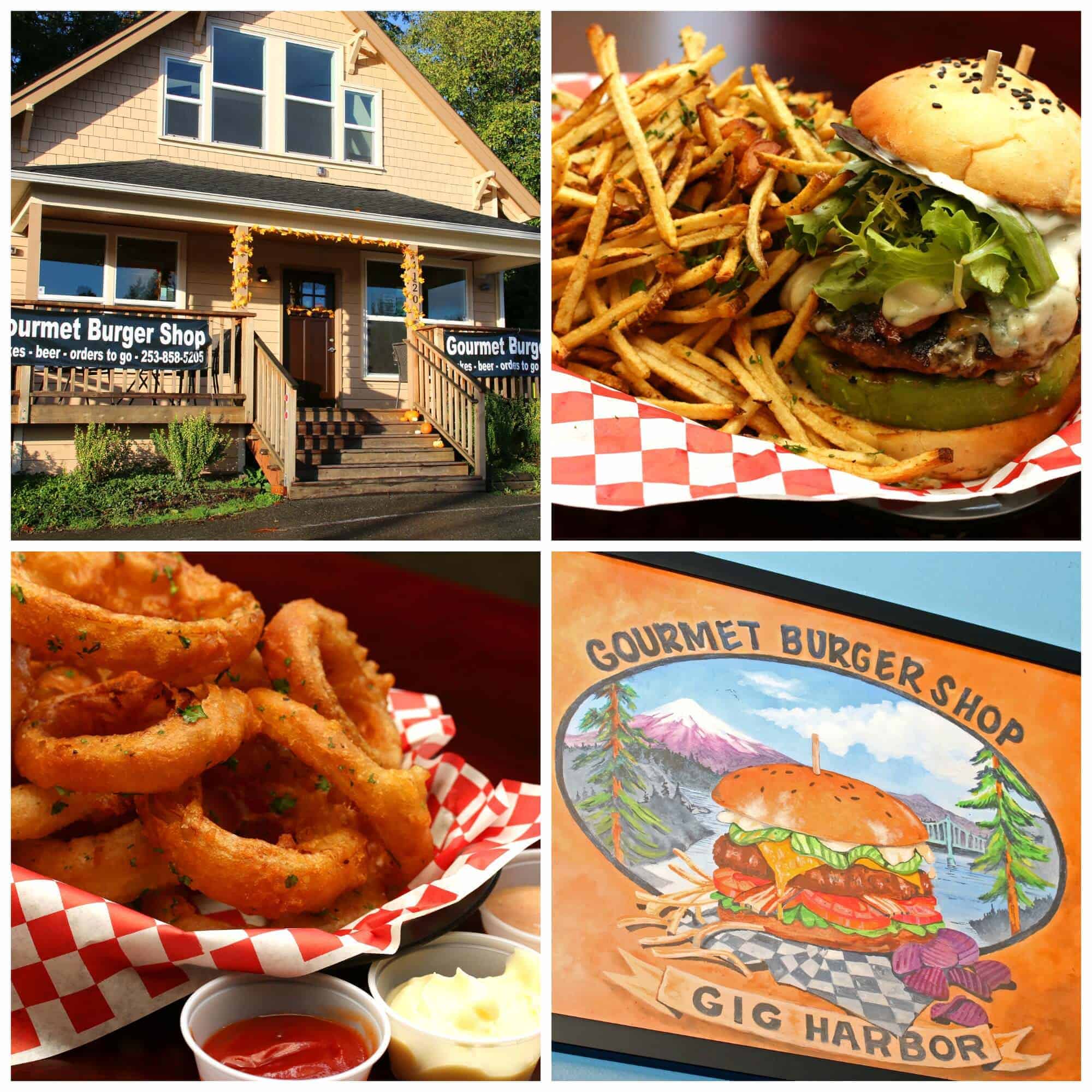