The next installment to my Mega Healthy food series!  Ever since experimenting with my Mega Healthy Honey Olive Quinoa Cake, quinoa has become a baking favorite. Quinoa is ideal because it cooks up especially soft and blends in well with whatever it’s baked in.  These pancakes are not only made with quinoa, they’re deceptively packed full of olive and coconut oil, flax seeds, wheat germ and oat bran.  And my little ones gobbled them up and never had a clue!  And I have pics to prove it.  Come take a look!

*Note:  Include quinoa for “Die Hard” Healthy Pancakes, or omit the quinoa (see instructions) and still have Mega Healthy ones!

I was fortunate to grow up with a mom who not only was a phenomenal cook, she was also very health-conscious.  She was always creating healthy treats and food for us to eat. One of them was pancakes.  At one point my mom experimented with putting sprouted wheat in our whole wheat pancakes and I can still remember sitting down at the breakfast table, about 7 years old, anxiously awaiting some delicious pancakes drenched with maple syrup…and then biting into those.  Wow, were those ever not good!  My brother and I hated them and after several times of complaining my mom finally stopped putting the sprouted wheat in them (see, sometimes kids’ incessant complaining does work).  To this day my brother and I jokingly give my mom a hard time about those particular pancakes.  But now I appreciate those kinds of things that she did, because it instilled in me a desire to eat healthy.  And to make healthy eating a priority for my kids. 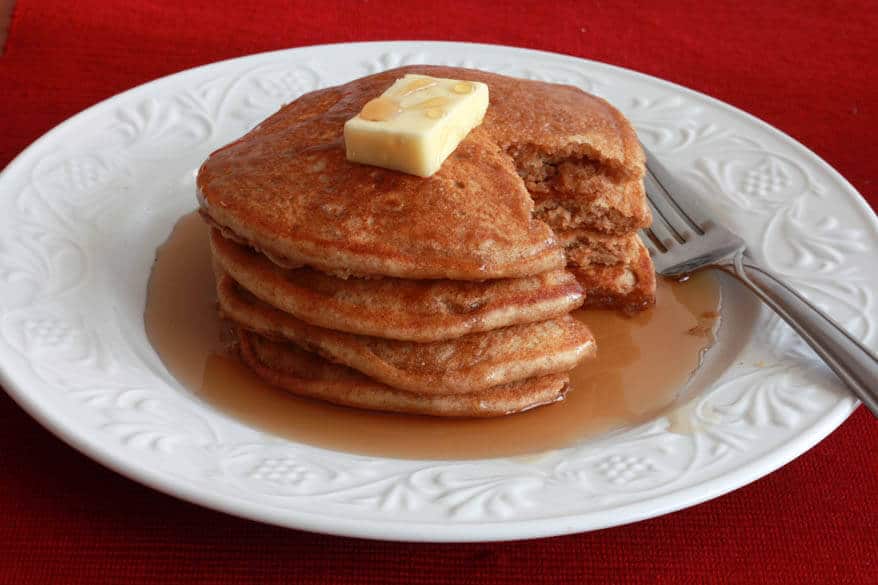 I developed these pancakes a couple of months ago in an attempt to help my kids get optimal nutrition through a food they already enjoyed.  I thought if I could make them in such a way that they wouldn’t notice they’re eating quinoa, olive oil, coconut oil, flax seeds, wheat germ and wheat bran, it would be a victory indeed!

And so I after making my first batch, I had my 3 year old sit down at the table to eat his pancakes. And, being 3 years old, he wanted to be unconventional and requested to have his pancake spread with jam and to eat it outside.  So I spread some strawberry jam on one side of the pancake and he took it outside with him.  I followed him, camera in hand, eager to see if he would eat it.

This is what I observed:

After a few bites he got up and continued happily eating his pancake while playing and pulling his wagon. 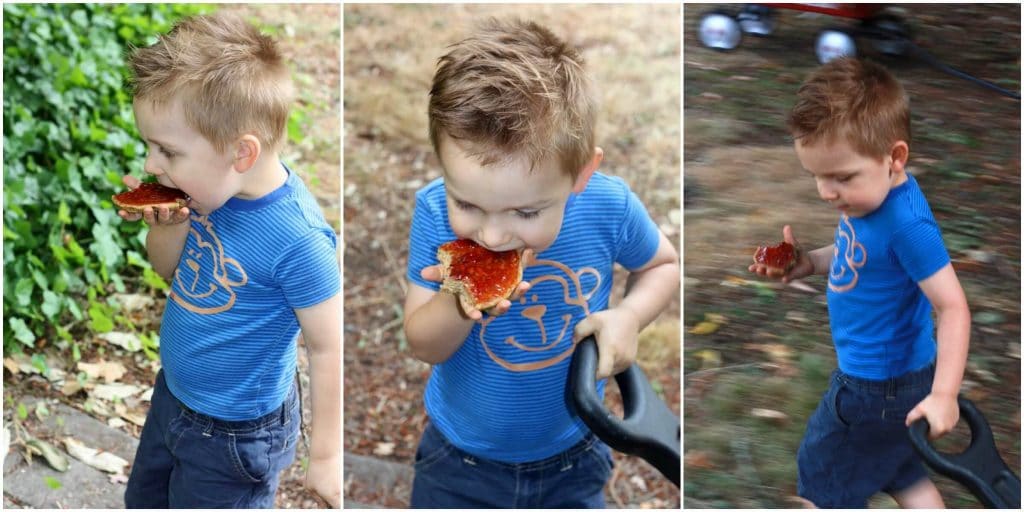 Success!  I now make these in advance and freeze them to always have on hand to quickly thaw and serve.  And my 17 month old daughter enjoys eating them as well.

I served these pancakes to my husband – and even my partner-in-crime brother – and they both enjoyed them.  Both the Little ones and the Big ones enjoyed them – score!

* Note:  For the standard “mega healthy” version (as opposed to the “die hard” healthy version) you can omit the quinoa if you prefer.  You’ll still have some mega healthy pancakes.  If you don’t use the quinoa, decrease the buttermilk by 1/2 cup and add an extra tablespoon or two each of wheat germ and oat bran.

Let’s see if you can tell!

* Tip:  When baking with honey and oil, measure the oil first – that way when you measure the honey it will slide right out without sticking to the measuring cup. 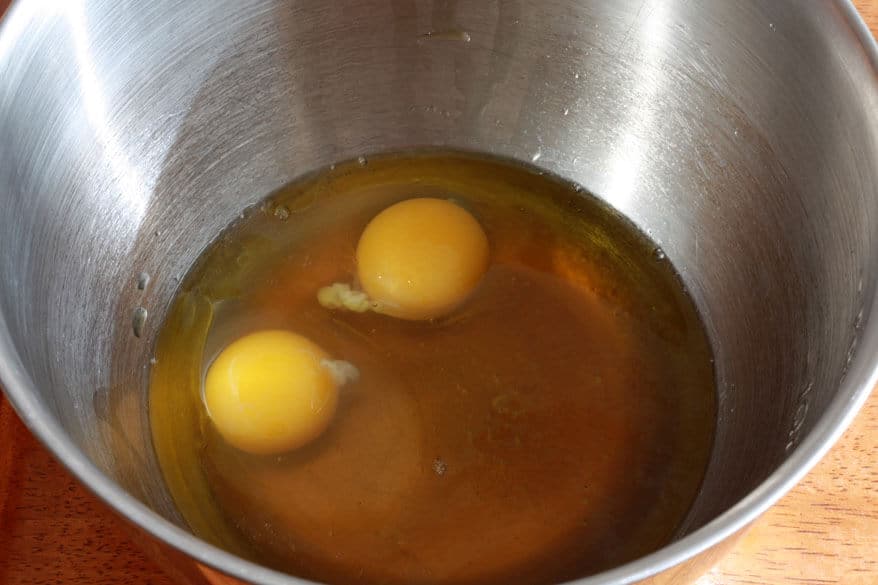 Add the buttermilk and whisk until combined. 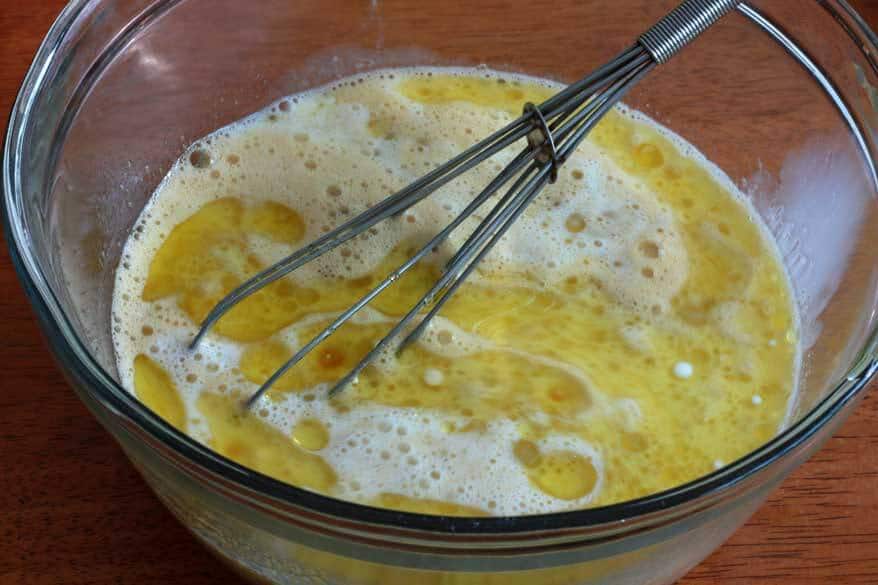 Grind up some flax seeds. 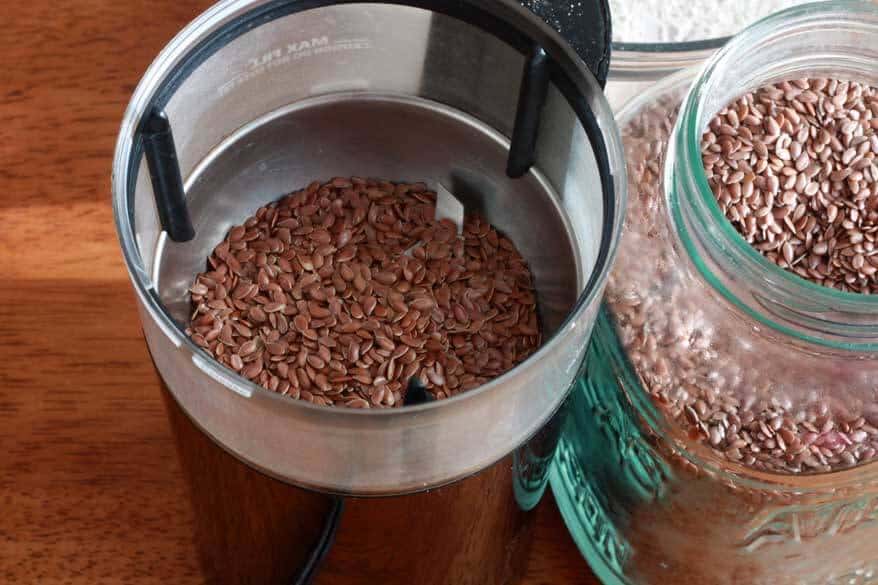 Add the flour mixture to the wet mixture and beat until combined and no lumps remain. 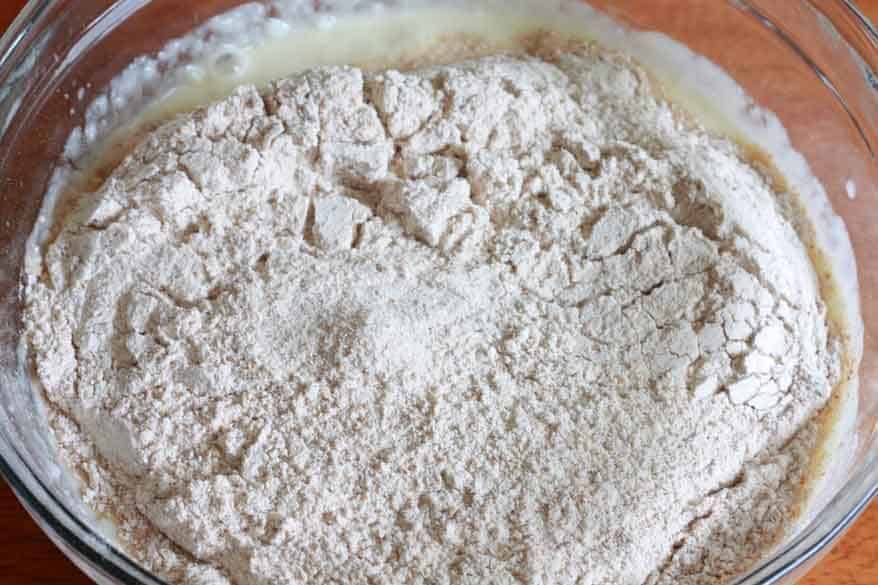 Add the cooked quinoa and stir until combined. 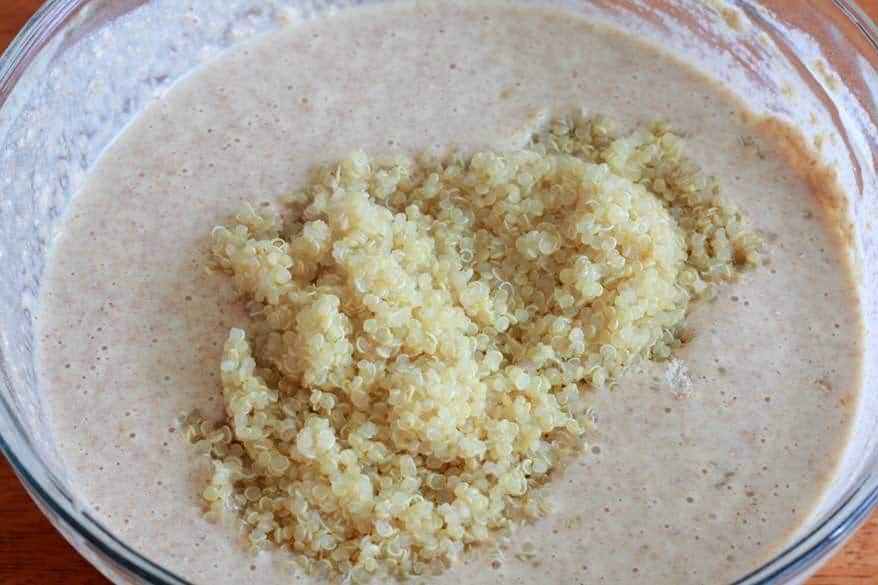 Measure the batter out – 1/4 cup per pancake – and pour onto a hot griddle or non-stick skillet.

Cook the pancakes until small bubbles/holes begin to appear in the batter.  Then flip the pancakes over and cook until golden brown, about 2 minutes on each side. 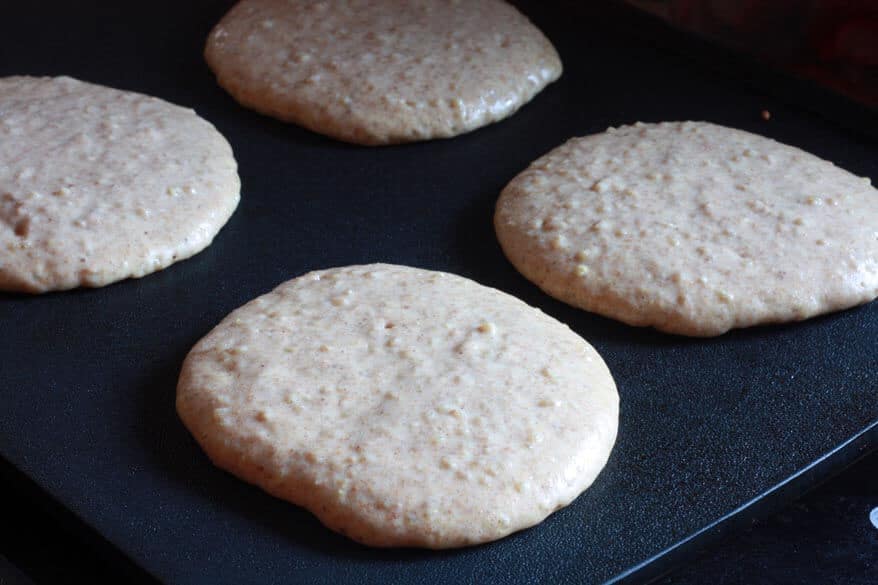 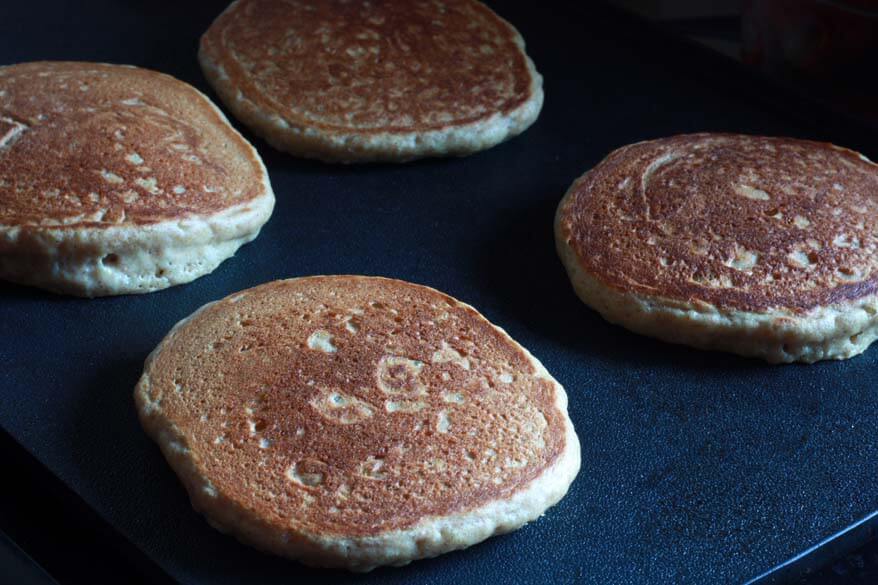 Serve hot with your choice of syrup. 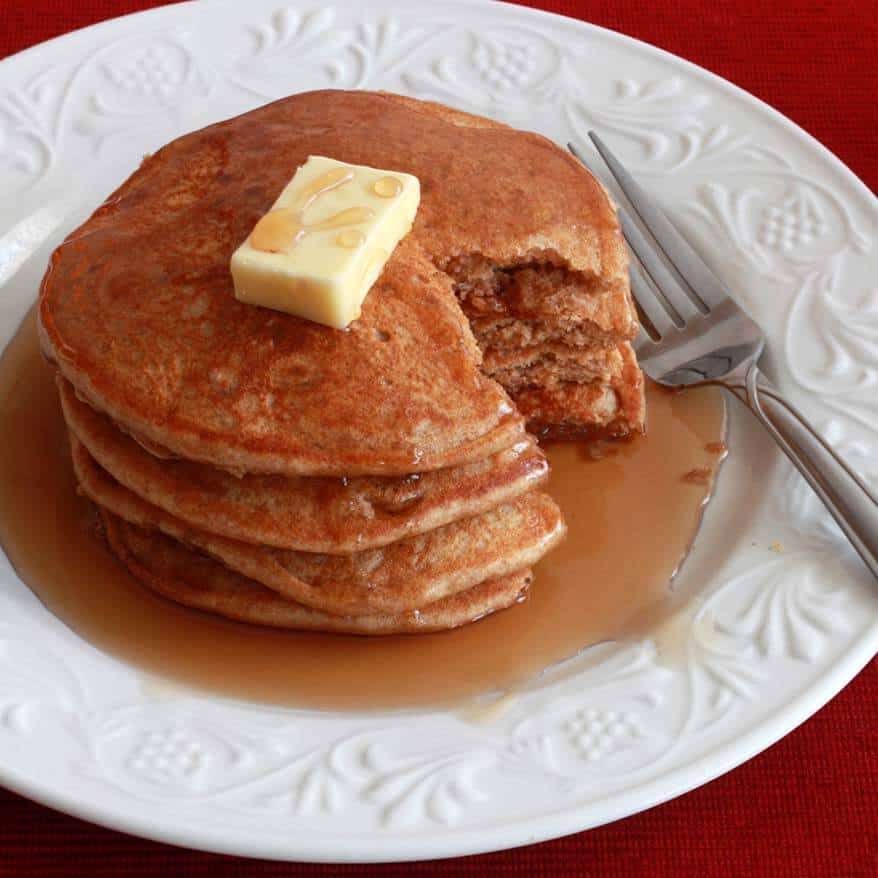 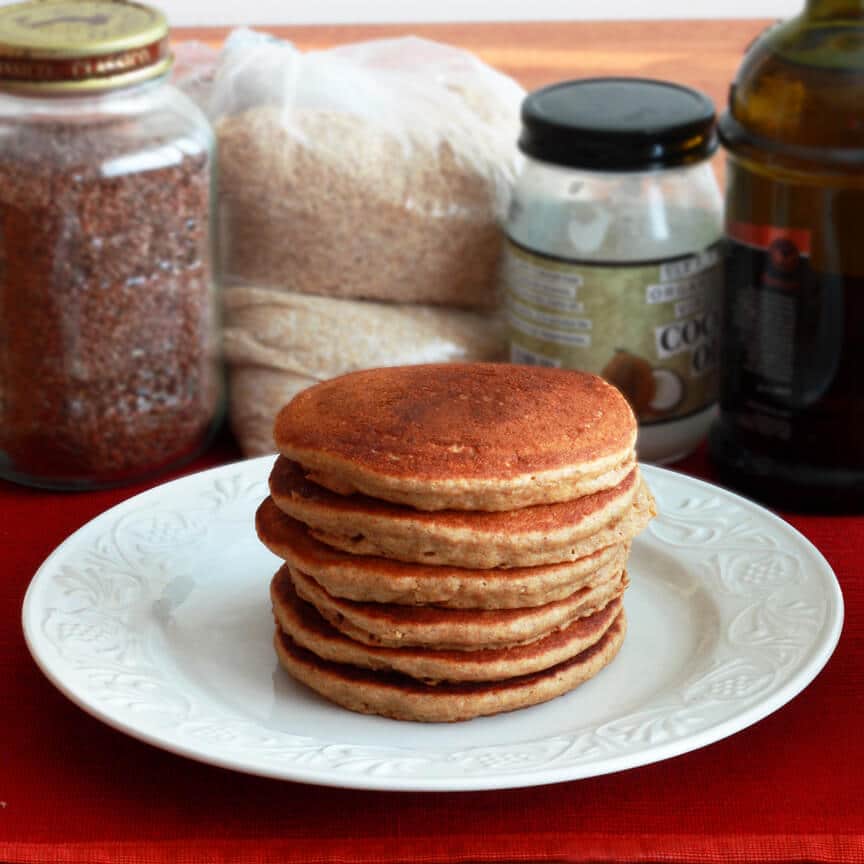 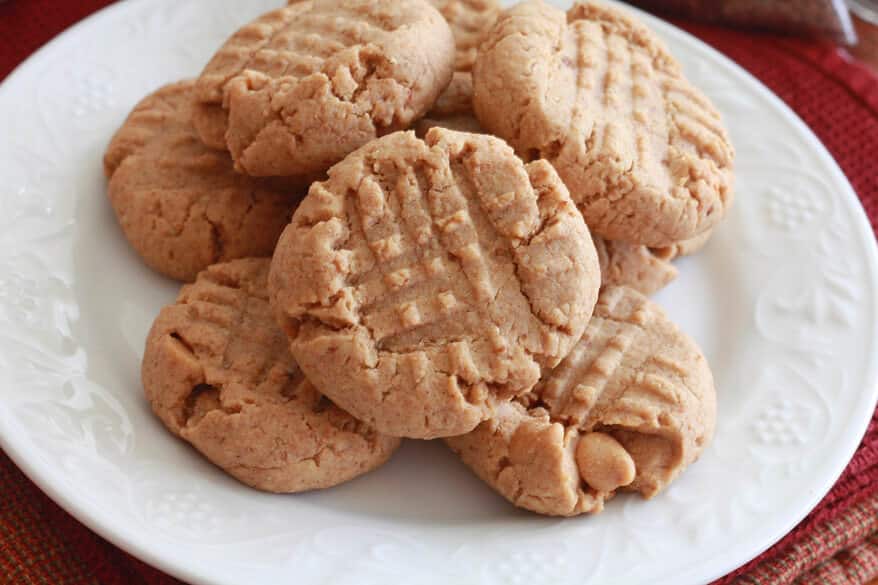 Print
: The Daring Gourmet, www.daringgourmet.com
Serves: 22 Pancakes
Ingredients
Instructions
Notes
If you prefer not to include quinoa, simply decrease the buttermilk by ½ cup and add an extra tablespoon or two each of wheat germ and oat bran.
3.2.2124
28 shares
« Easy Weeknight Jambalaya
Ultimate Pumpkin Bread (+ a Tour Through Goblin Valley!) »