As an Amazon Associate I earn from qualifying purchases.
268shares
Jump to Recipe Jump to Video Print Recipe

Thank you to Culinary Collective for sponsoring this post

It’s no wonder paella is the national dish of Spain because this delicious and drop-dead gorgeous dish is simply phenomenal!  This Valencian paella recipe is a one-pot rice dish that’s easy to make and perfect for casual weeknights, a romantic dinner or for entertaining! 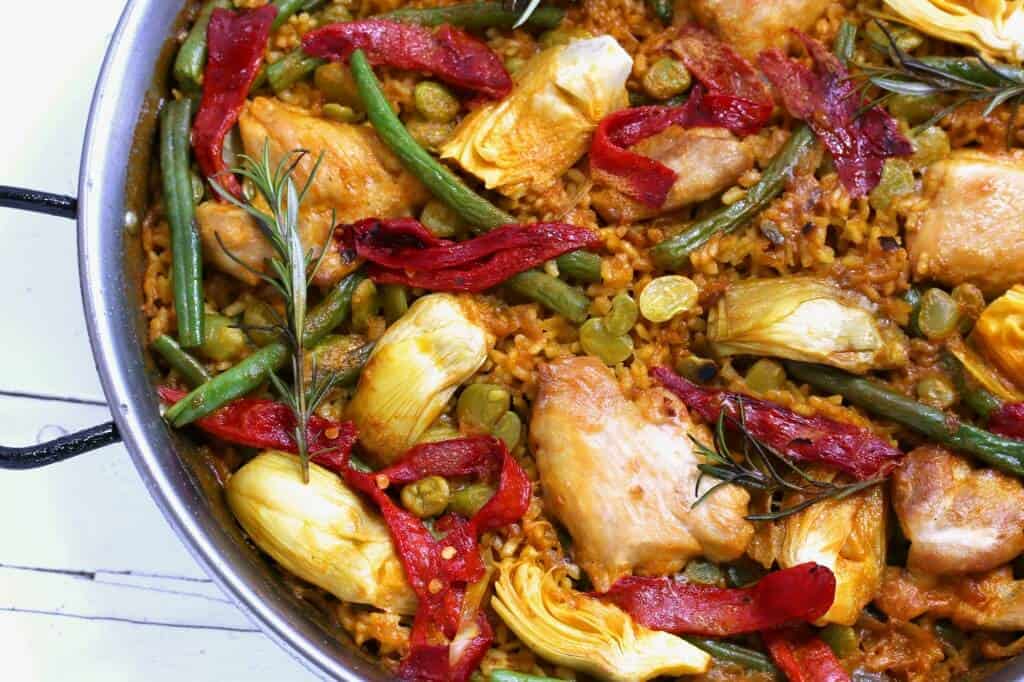 Paella, paella, paella…it sounds like a romantic melody.  And paella really does conjure up an image of romance, don’t you think?   You’ve seen those movie scenes where the guy stops by the girl’s apartment with a bag of groceries in one hand and a paella pan in the other, ready for a romantic night in.  This paella recipe is all you need for that perfect date night in!

One of the most famous of the world’s national dishes, paella – the word deriving from the Old French word paelle for “pan” – is also one of the most delicious with a colorful palette of ingredient options.

For the same reason I love Chinese stir fries, paella is such a great medium for adding lots of healthy veggies and you can create any combination under the sun.  Paella makes for a wonderfully wholesome one-pot dish that lends itself to endless creativity.

And paella is just so doggone fun to make!

If you haven’t already gotten into the paella groove, you must! 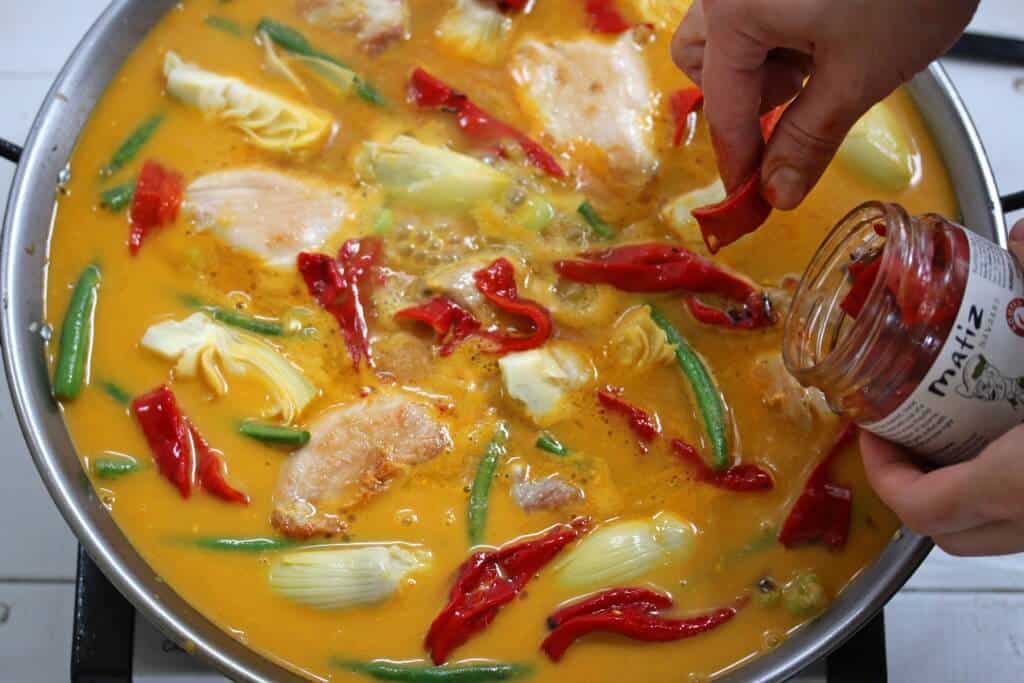 The paella recipe we’re making today comes from Valencia, Spain.  We toured Spain last Summer and Valencia was one of our stops.

A city with a rich culture and heritage, Valencia is known for its combining of history with ultra modernity.  Its beautiful historic buildings are juxtaposed with futuristic structures reminiscent of something in a sci-fi movie.  Indeed, Valencia is known as The City of Arts and Sciences. 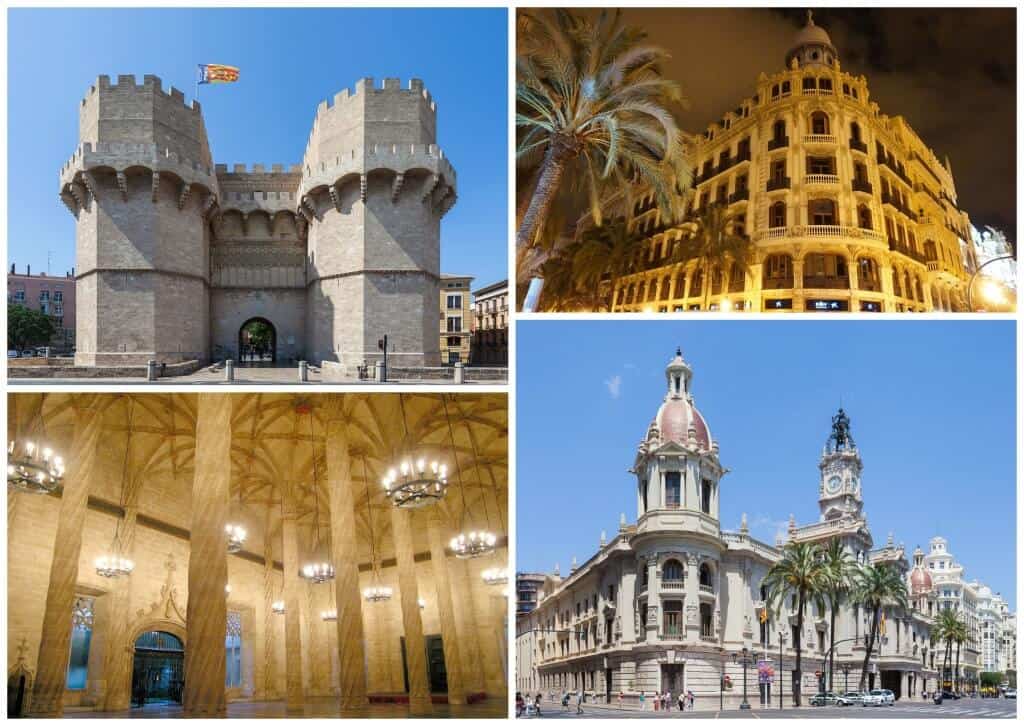 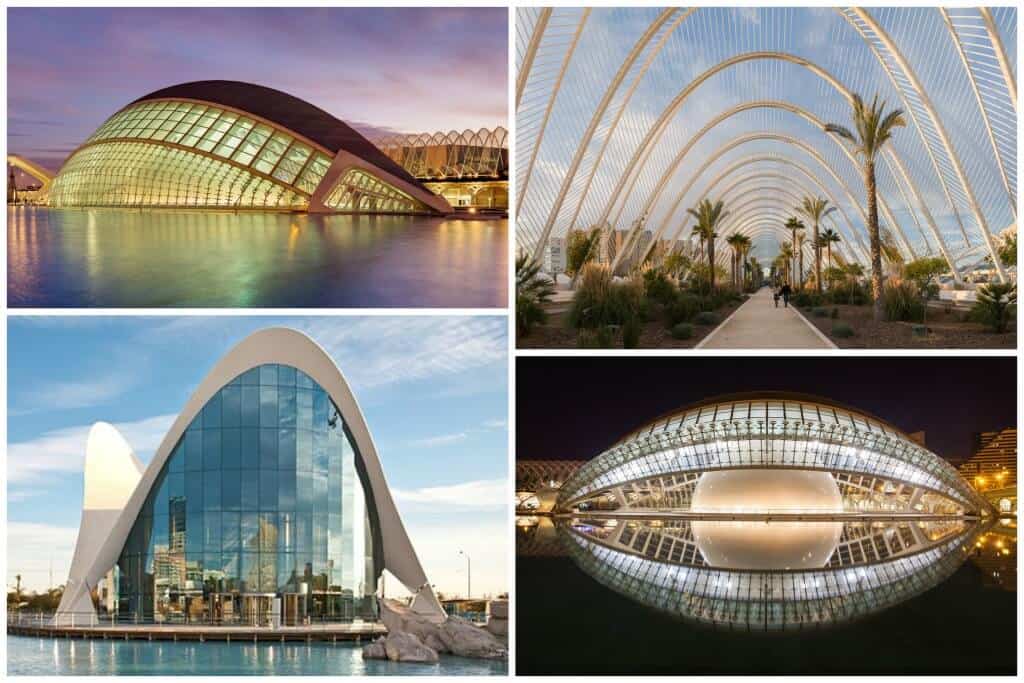 A truly traditional Valencian paella recipe would include rabbit and snails in addition to the chicken but I couldn’t find rabbit – and I didn’t want to find snails – so those two ingredients have been omitted.

Traditional Paella Valenciana also includes a third kind of bean, a white bean, that’s hard to find outside of Spain.

But our paella captures the spirit of Valencia with its other traditional ingredients like chicken, beans, artichokes, peppers, rosemary and its rich saffron-colored rice. 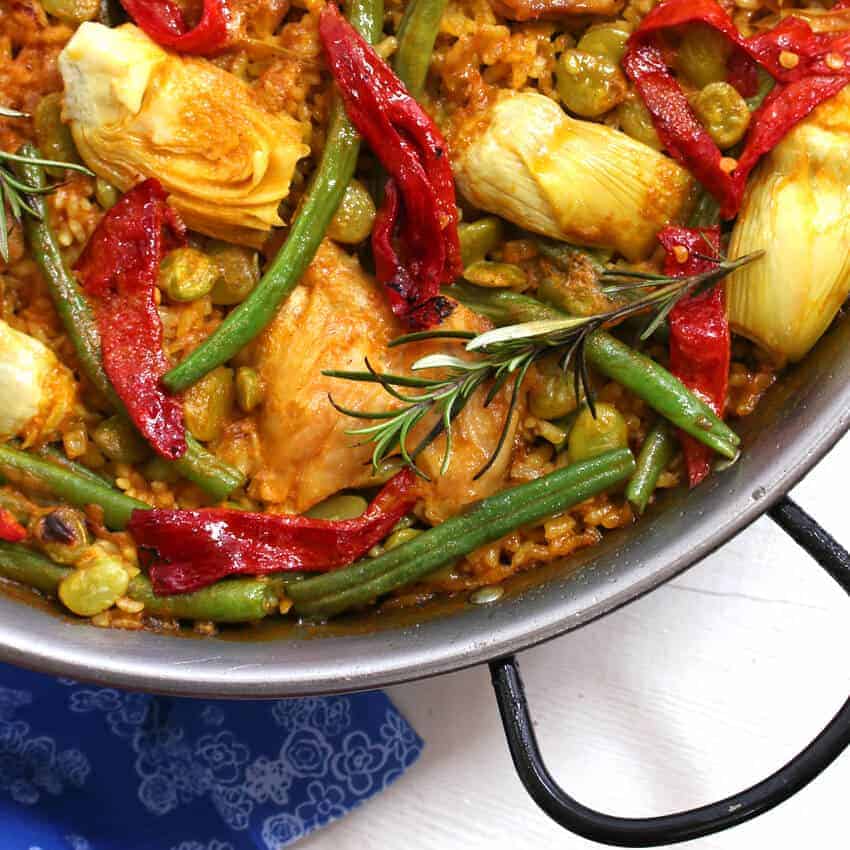 Modern technology has almost completely replaced the traditional open-fire method of making paella, but Valencian cooks have found ways to replicate the flame-kissed characteristics of paella by adding smoked paprika and rosemary (for a woodsy flavor) and adding artichokes to darken the color.  Another popular method is to cook the paella on a grill. 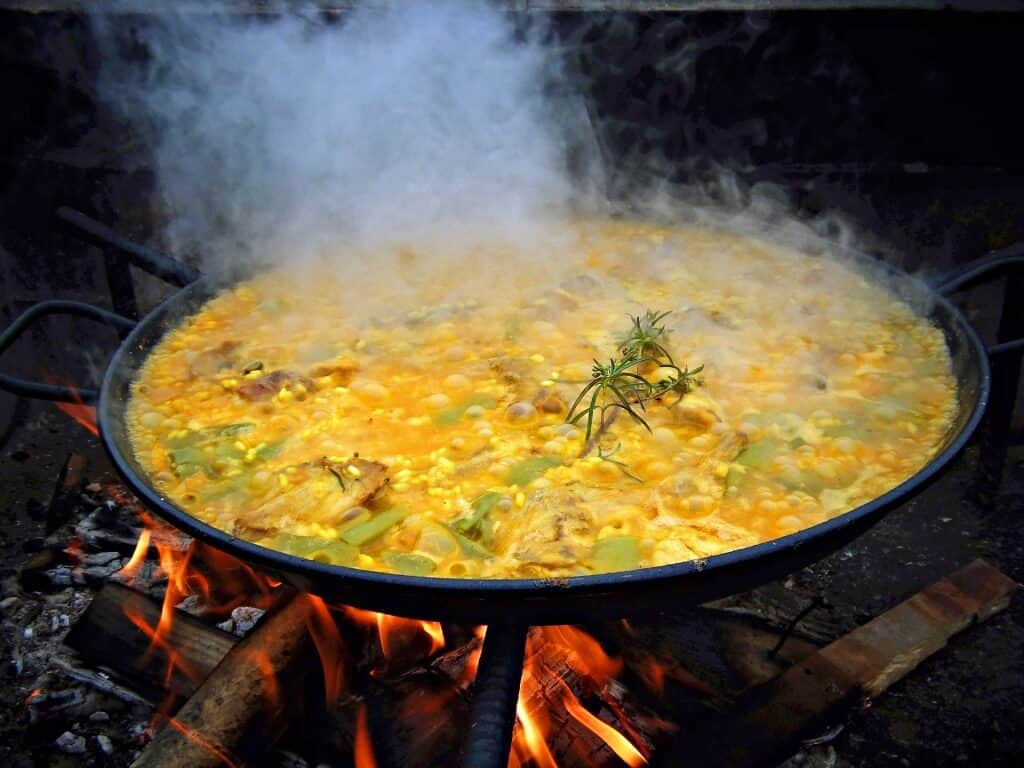 This past weekend I had an opportunity to attend a Paella Party in Seattle sponsored by Culinary Collective, an importer of gourmet cultural foods from Spain and Peru.  I was able to meet several wonderful brands in person and sample their products.  And I was also able to finally meet the producers of a brand I absolutely love and have been using for nearly 2 years: Aneto.  They’re the Barcelona-based makers of my favorite broths.

I was also able to soak up some paella inspiration from the Aneto team and dream about our upcoming trip to Spain. 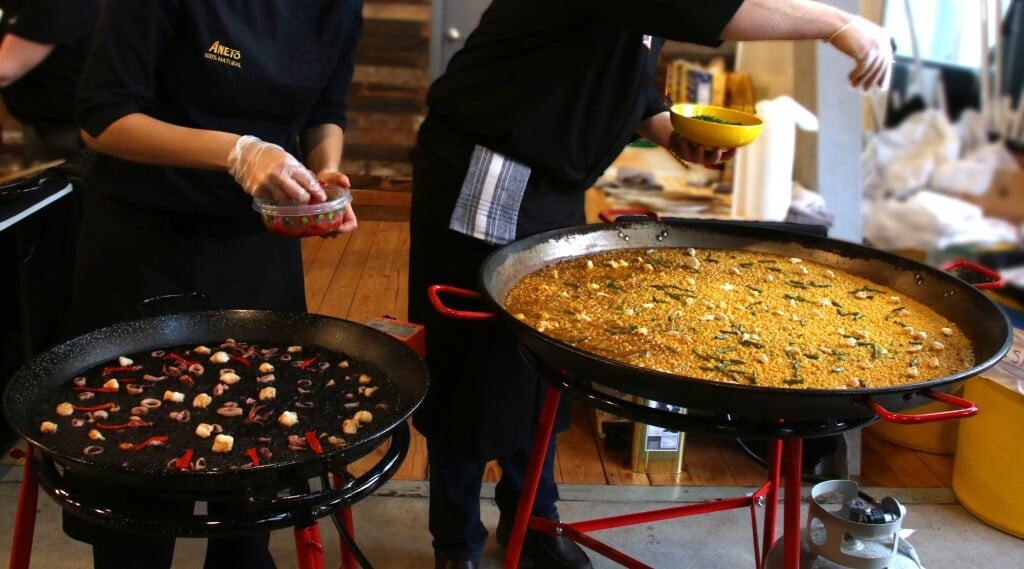 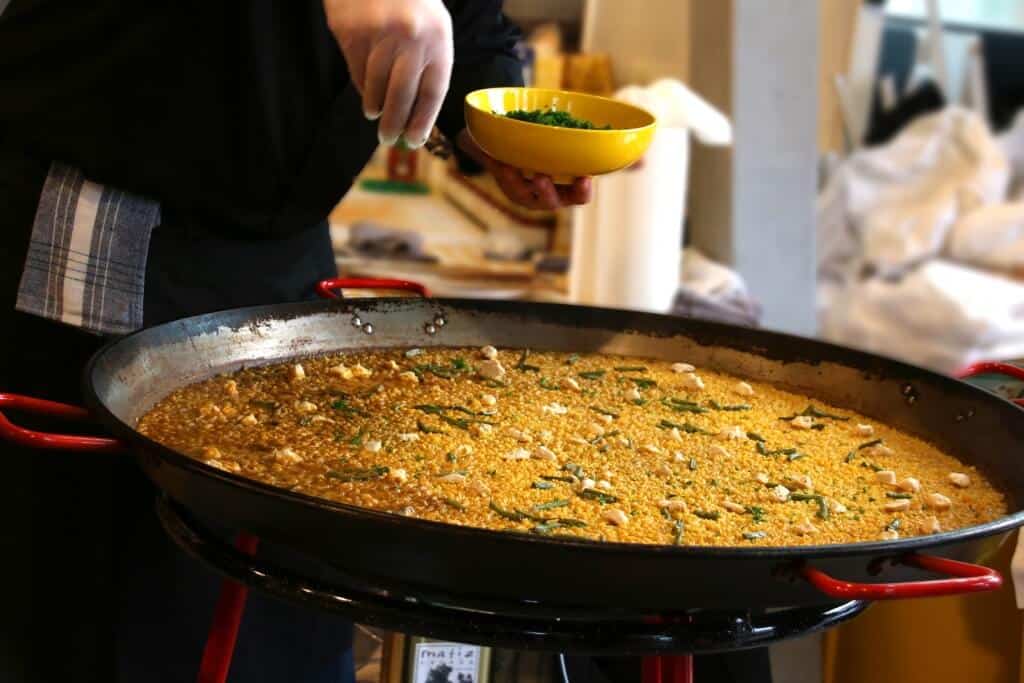 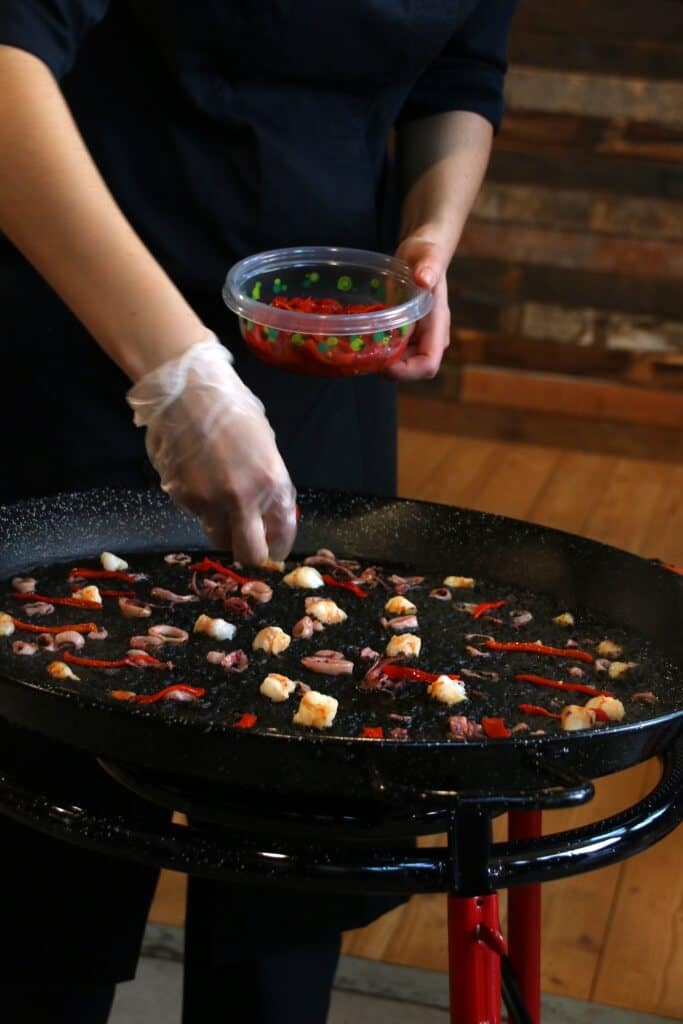 For a dish as famous and beloved as paella, it packs a lot of controversy, even though there’s no clear consensus on the rules of paella-making.  At least when it comes to ingredient combinations.  Indeed, many of the traditional “rules” are broken even in Valencia.

Still, there is at least one rule that every paella purist will insist upon.  Above and beyond all:

DO NOT STIR THE RICE.

To do so constitutes the ultimate offense and comes with a heavy penalty.  Okay, not really.  But do not stir the rice.  And the reason behind that isn’t just nonsensical tradition.  It is the key to paella’s flavor.  Not stirring allows you to achieve the ever sacred socarrat – that cripsy golden brown crust that forms at the bottom and is the most coveted part of paella.

Now that we’ve covered that important base, are you ready to create a paella party of your own?

Then let’s get started! 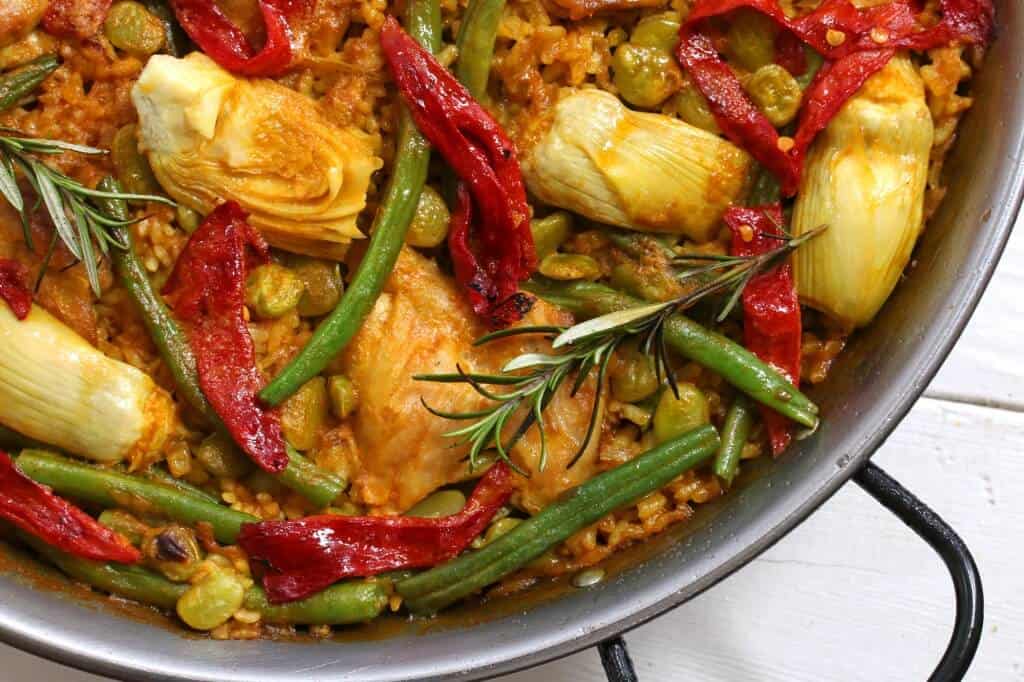 For our Paella Valencia we’re using hands-down THE best paella base you’ll find anywhere.  It’s made by Aneto, my favorite broth manufacturer, and it’s an all-natural broth made in Barcelona from the freshest vegetables, meats, herbs and spices and slow-cooked to achieve a flavor that is simply unmatched.  No need to add saffron, it’s already in the broth.

For more information about Aneto and what sets them apart, join us as we take a tour of their factory in Spain.

Aneto’s Valencian Paella Cooking Base is amazing and will absolutely transform your paella! 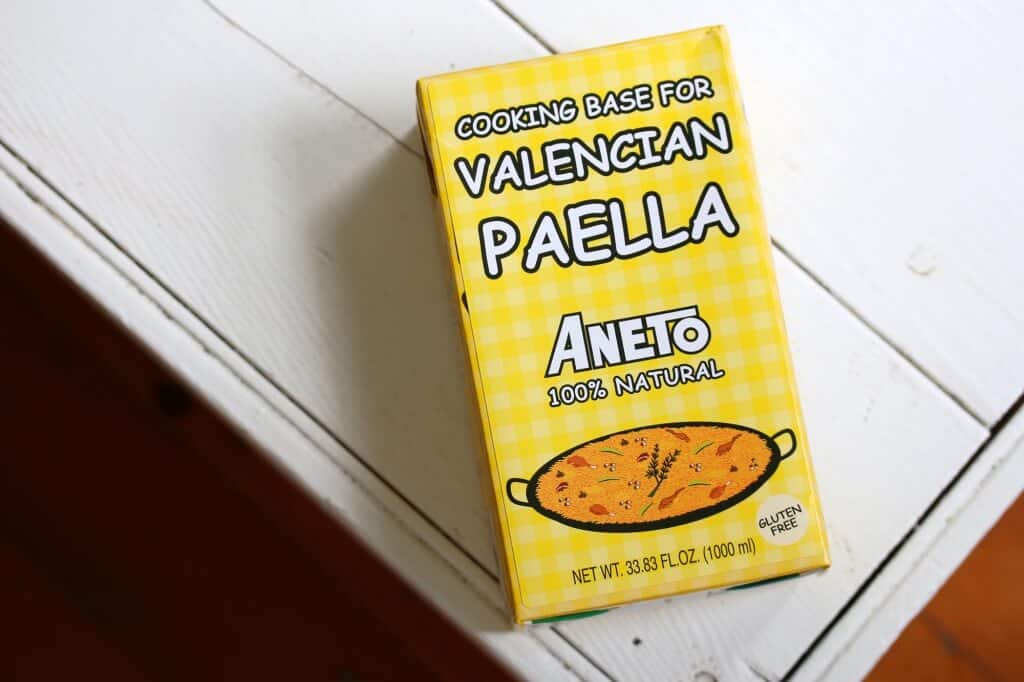 Matiz’ paella rice is grown is Spain and the small grains perform particularly well for paella, yielding a perfect texture and consistency. 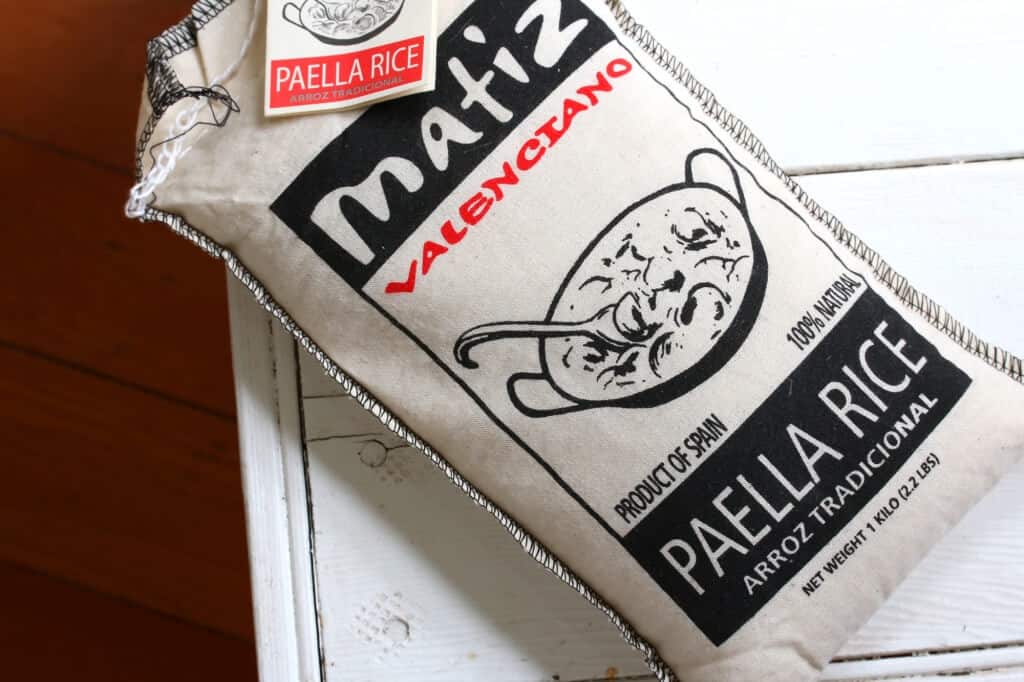 Matiz’ roasted Piquillo peppers are hand-picked in northern Spain and produced without any chemicals.  They’re slow-roasted over an open wood fire and have in incredibly rich and complex flavor.  I found myself popping several in my mouth while laying them out on the paella.  They are so good! 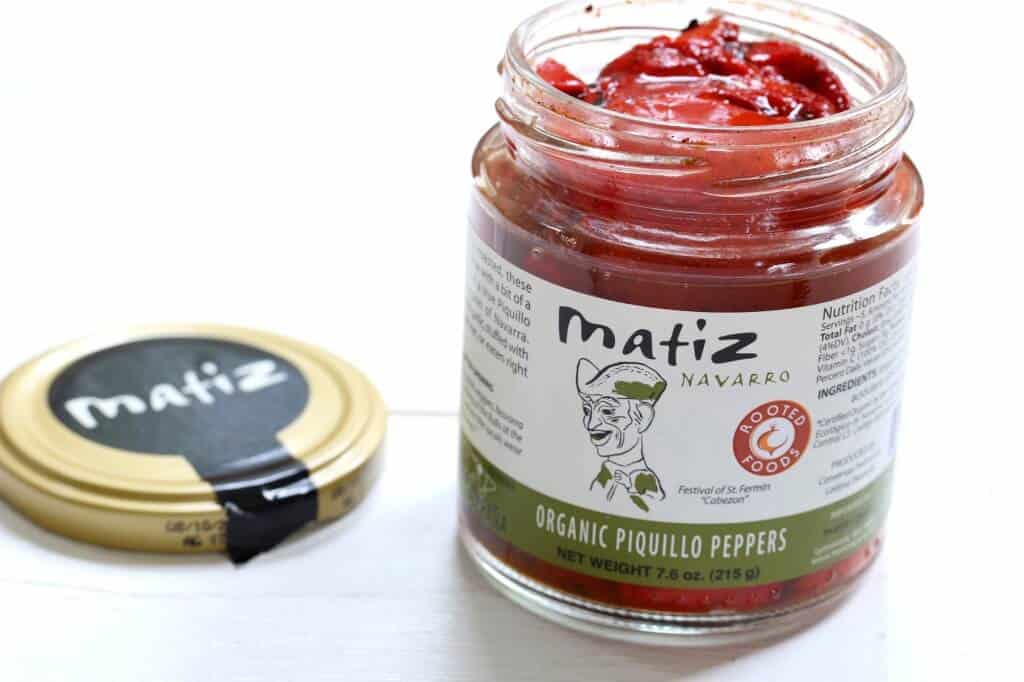 You’ll also need a paella pan.  You can use a regular skillet but a paella pan is constructed for optimal results.  Some come with dimples on the base  for even heat distribution.  And whatever size you choose will depend on your cooking surface and how many people you plan to feed.  I used a 34 cm paella pan for this dish. 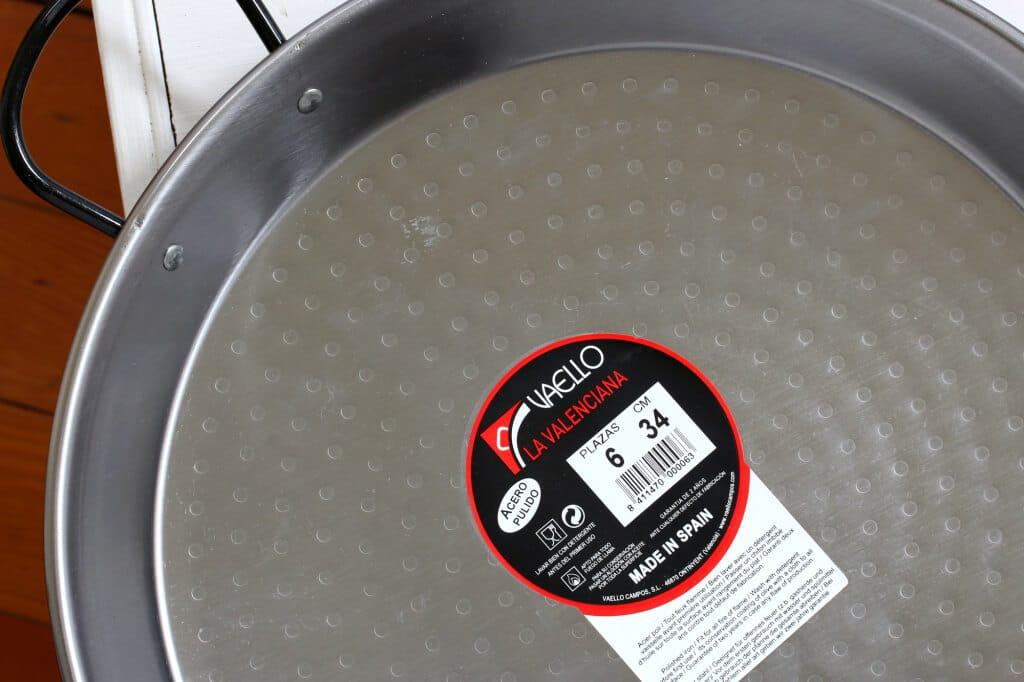 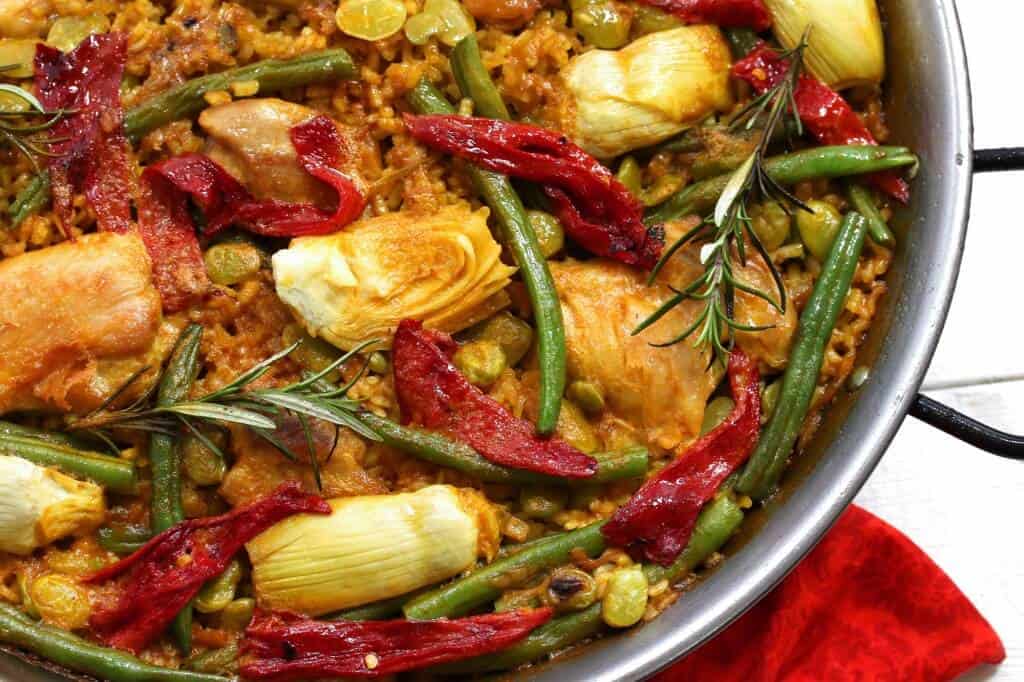 Now let’s roll up our sleeves and make some paella!

Heat some oil in the paella pan over medium heat, then add and brown the chicken pieces on both sides. 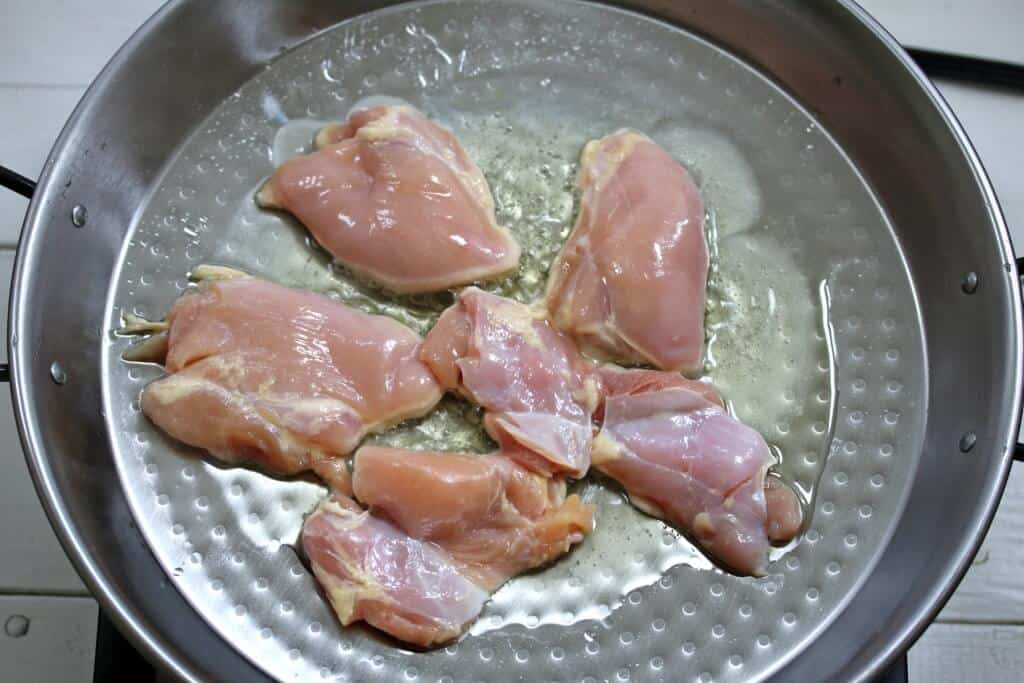 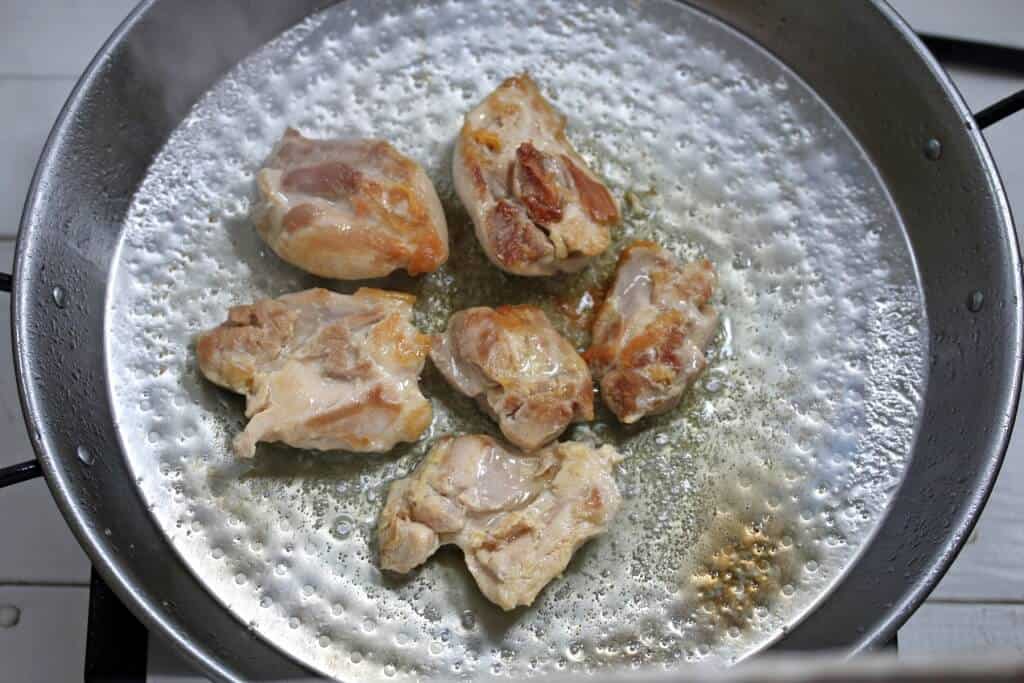 Transfer the chicken to a plate.  Add the onions and garlic and cook until soft and translucent, 4-5 minutes. 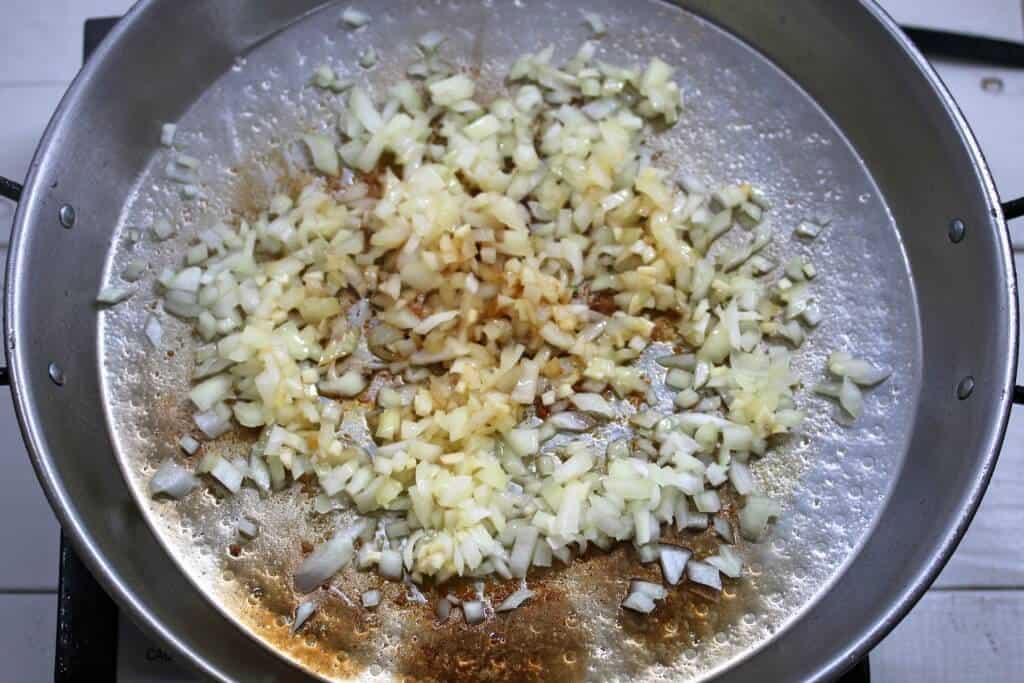 Add the green beans and lima beans and cook for a couple of minutes. 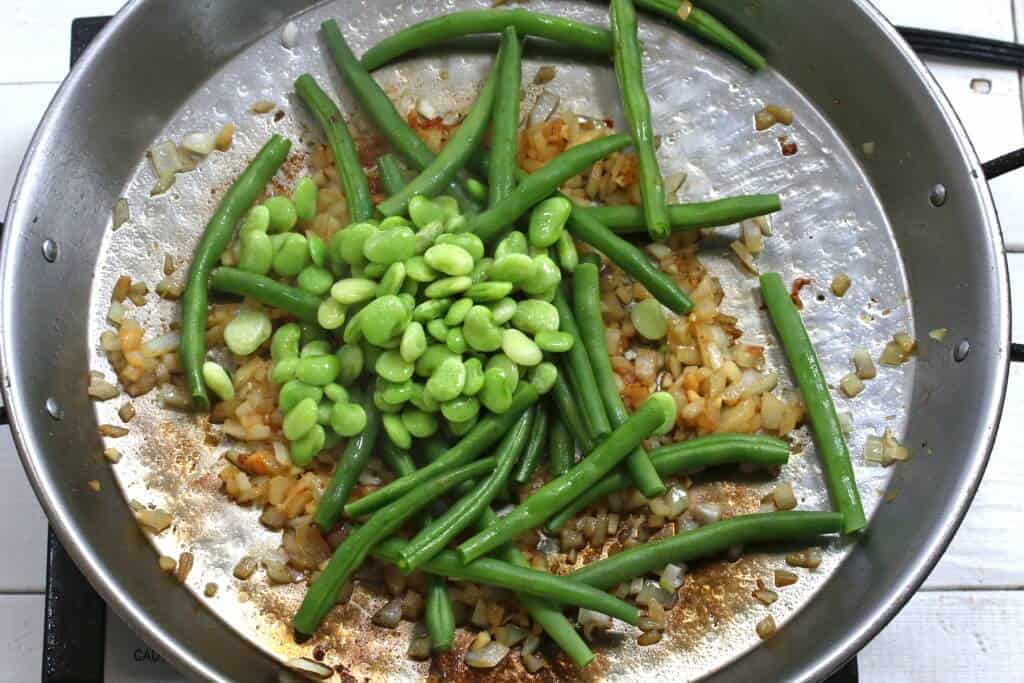 Add the paella rice, stir and cook for another 3-4 minutes, adding a little more oil if needed.  Add a little salt and pepper. 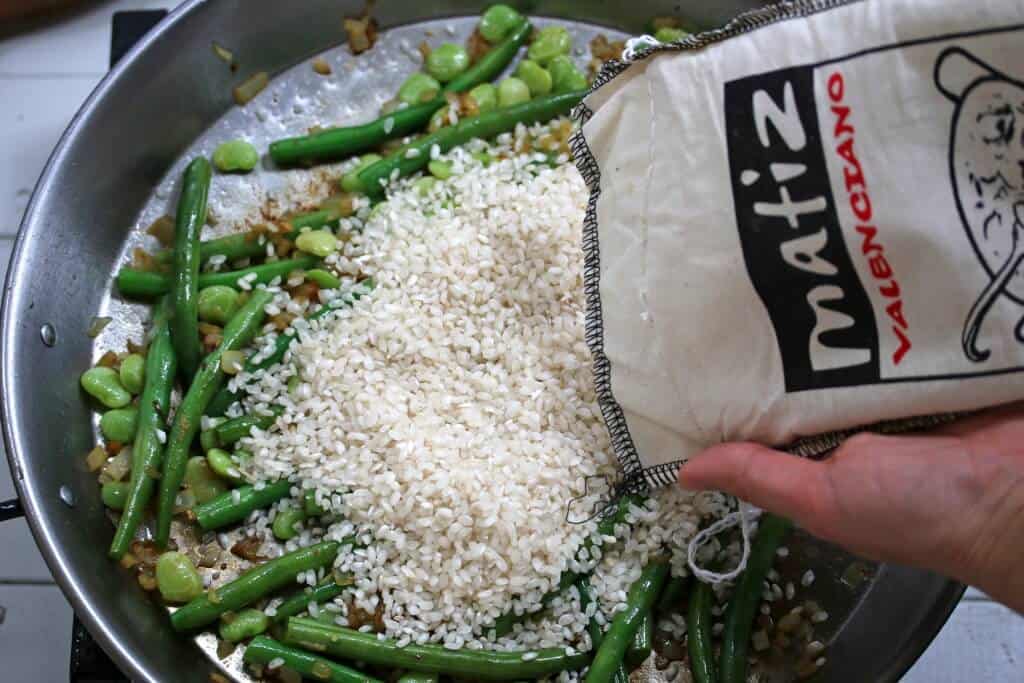 Position the beans the way you’d like them to appear in the final dish. 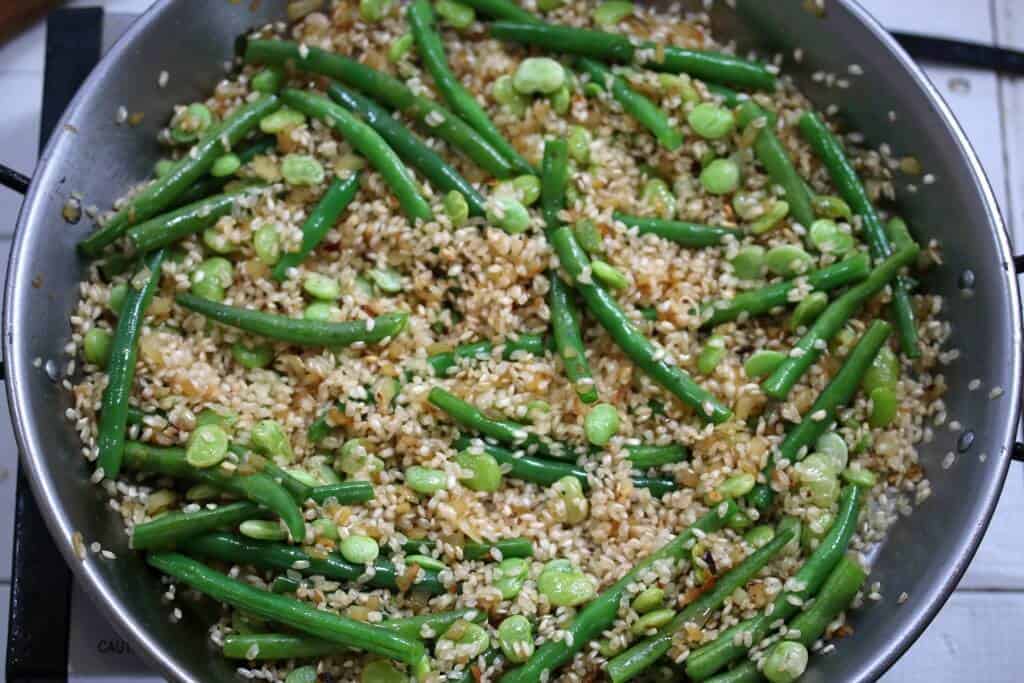 Pour the paello broth base into the pan.

Remember the cardinal rule:  DO NOT STIR. 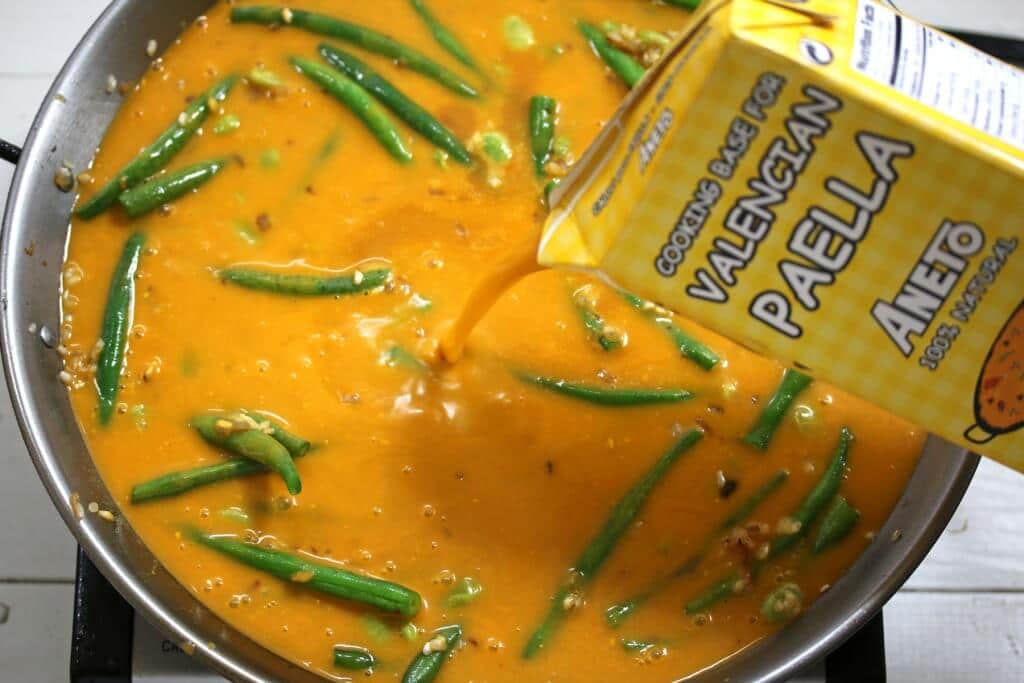 Once the mixture begins to bubble, position the chicken pieces in the pan. 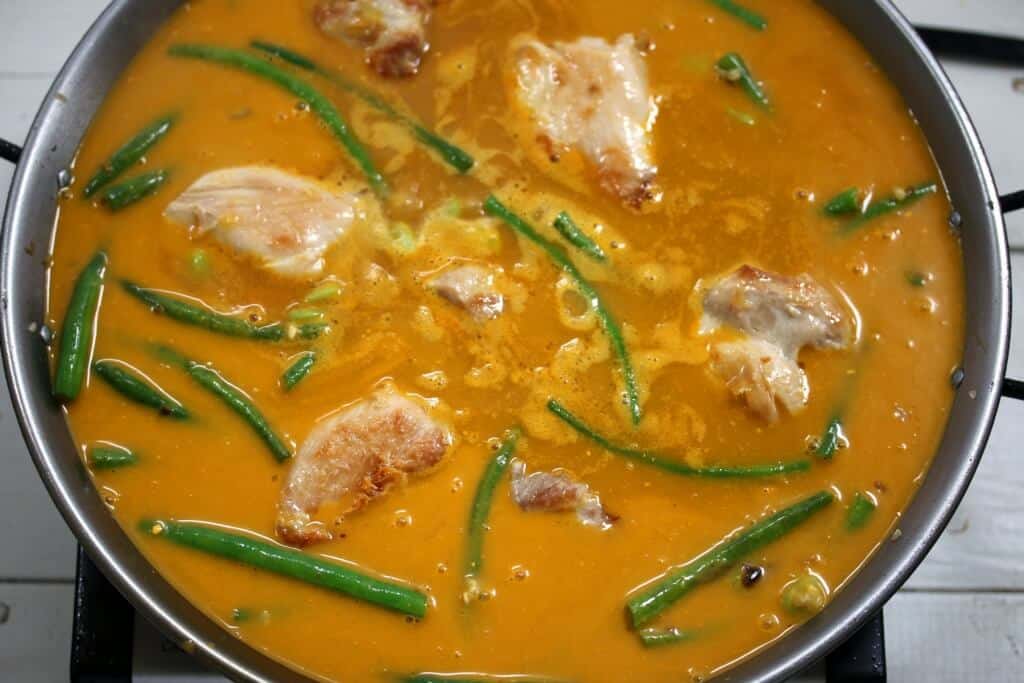 Place the artichokes around the pan. 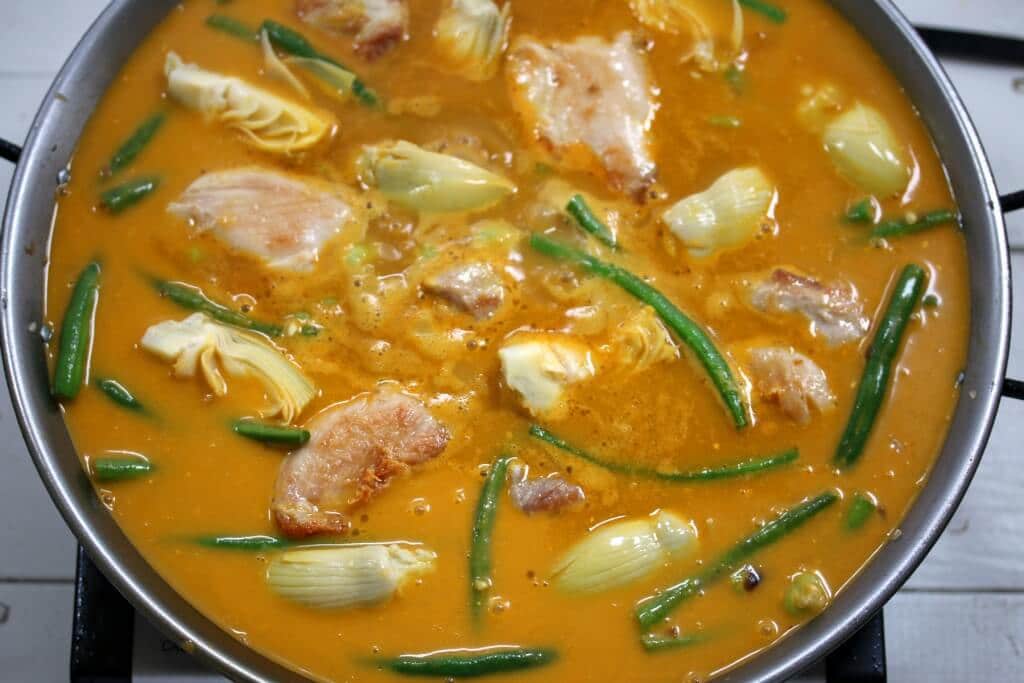 Place some strips of piquillo peppers on top.

Place some sprigs of rosemary on top.

Remember the idea is to position everything the way you want it to appear in the finished dish.

Simmer over medium-low heat for about 20 minutes or until the rice is done, rotating the pan as needed to cook the rice towards the outside of the rim. At the end of the cooking you can increase the heat for a few minutes to further caramelize the socarrat, the crispy golden-browned bottom. 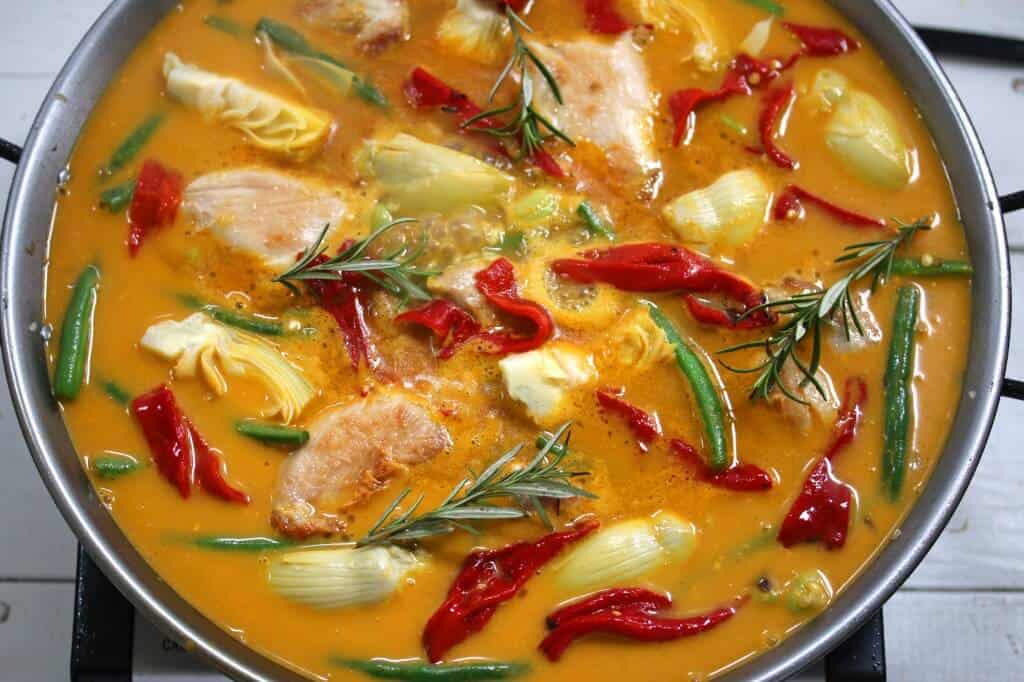 Place the paella pan on the table and let the party begin! 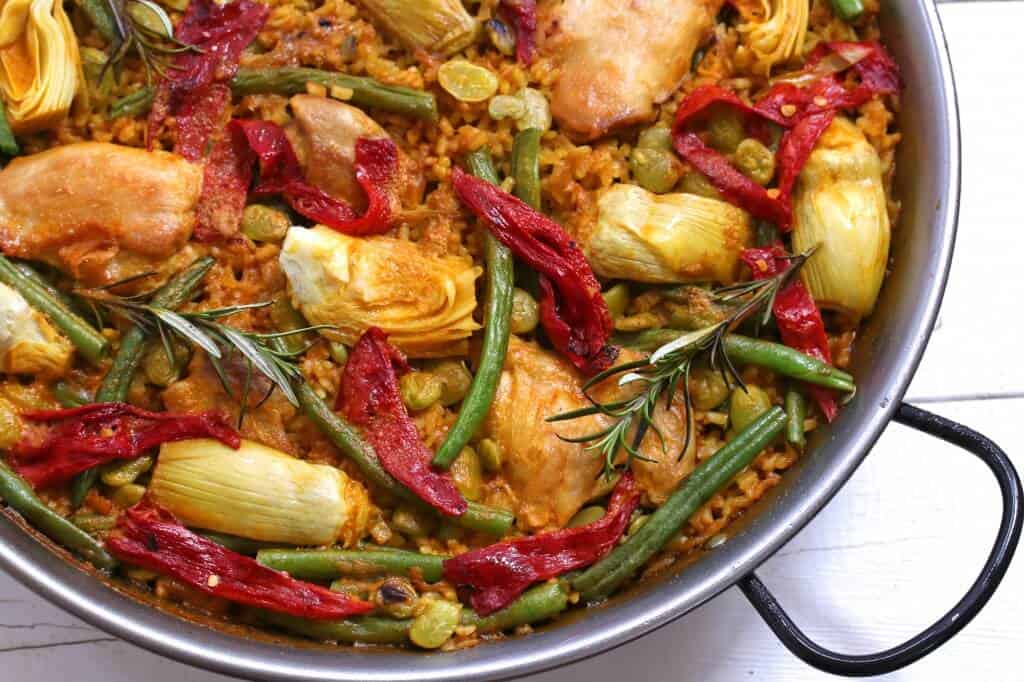 *THIS GIVEAWAY HAS ENDED*   Congratulations to our winner, Sharla! 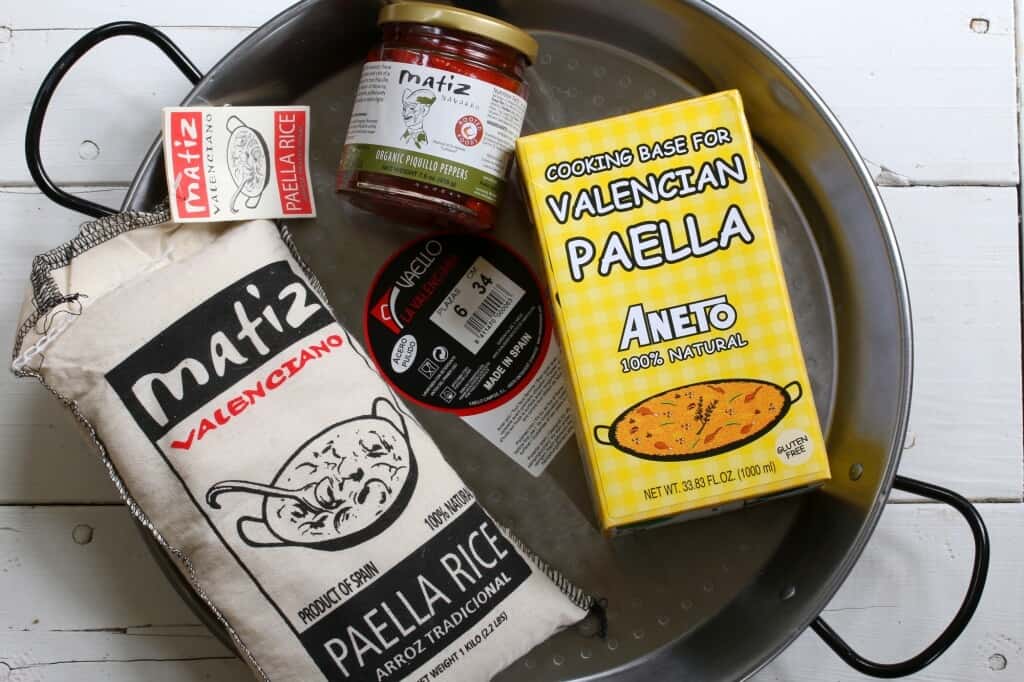 Be sure to also try this delicious Seafood Paella (Paella de Marisco)! 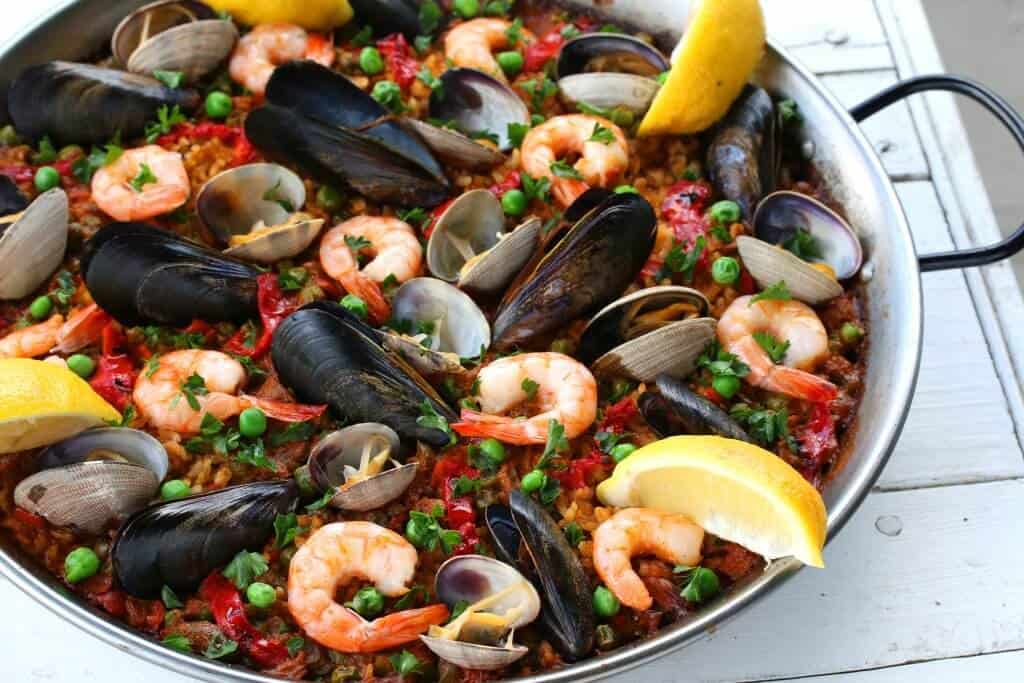 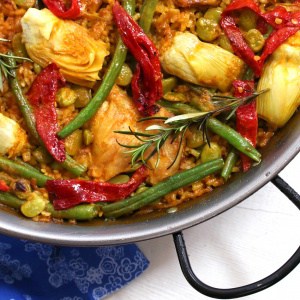 If you're using Aneto's paella cooking base it already has saffron in it so need to add extra.

Disclosure: Thank you to Culinary Collective for sponsoring this post.

268shares
« French Lentil Soup
Rhubarb Flowers: What To Do When Rhubarb Bolts and Goes To Seed »