Thank you to All You Magazine and Pollinate Media Group for sponsoring this post. 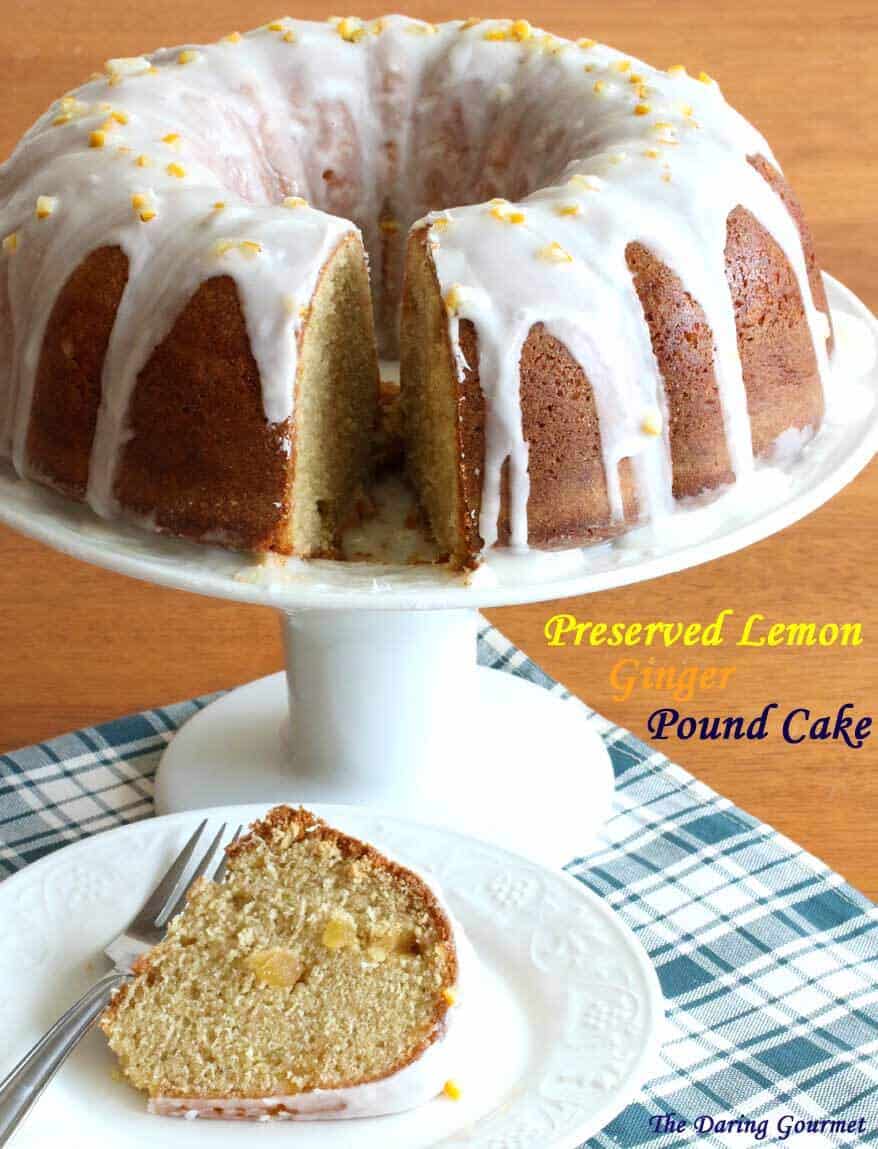 A delicious lemony cake punctuated with those preserved lemons we’ve been raving so much about lately.  This cake adds bits of chewy candied ginger and gets a double dose of lemon in the form of a sweet-tart lemon glaze.  A perfect cake for Springtime or any time of the year!

If you’ve been following my blog you’re already aware of my love affair with lemons.  And you’re even more aware of my latest love affair:  Preserved lemons.  Yes, yes, I know, I’m beginning to sound like a broken record and I keep bugging you to make them.  But I promise, you’re going to thank me once you do.  They’re so wonderfully versatile and you’re going to find yourself using them in your cooking and baking on a regular basis.  And you’re going to keep finding news ways to use them.  That’s what happened with today’s cake. While picking up some groceries at Safeway I snagged the April edition of ALL YOU magazine.  I love cookbooks and cooking magazines (yet another love affair of mine) and enjoying thumbing through them for inspiration.  As I flipped through the pages of All You I immediately honed in on one recipe in particular:  Lemon Ginger Pound Cake.  And what do you think popped into my mind?  You got it – Preserved Lemon Ginger Pound Cake!  (How’d you guess?)

So I began tweaking the recipe a little here and there.  Preserved lemons have a much stronger lemon flavor but are less sour and tart, so I wanted to mellow out the cake overall.  The original recipe calls for white sugar and I substituted a cup of brown sugar.  I also added a pinch of allspice for a touch of “exotic”.  Instead of a cup of butter, I used half a cup plus a half cup of coconut oil.  I love the flavor of coconut oil, but I also added it to make the cake more tender and moist.  And, of course, I minced up almost an entire preserved lemon.  For the glaze I also added some finely minced preserved lemon.  I love the appearance of that beautiful citrus rind and it adds extra “oomph” to the already lemony glaze. 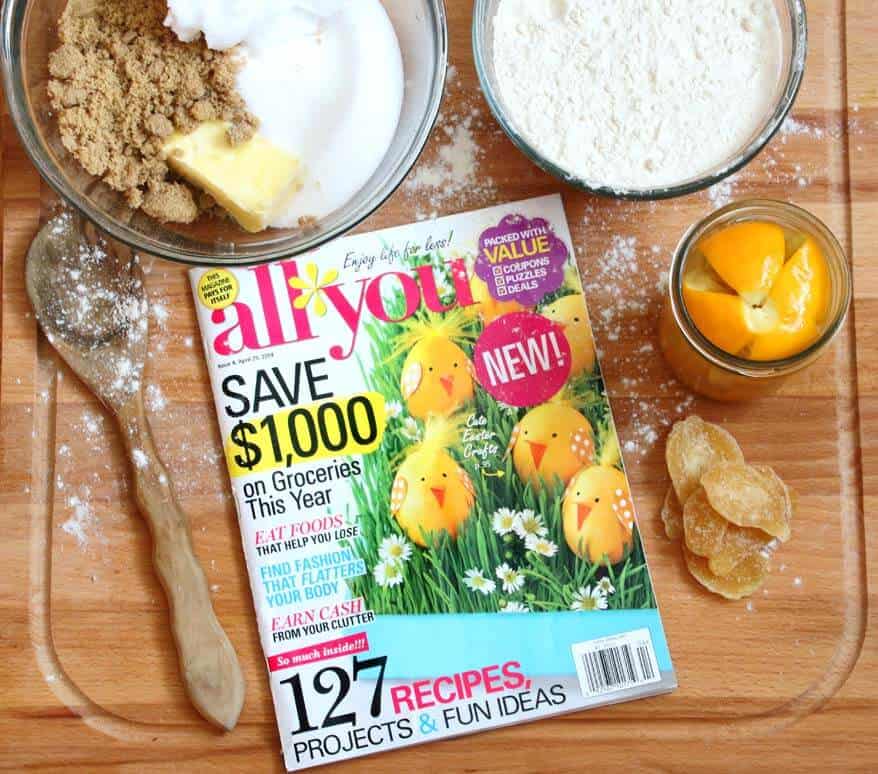 This cake is buttery, tender and moist, and is studded with those heavenly bits of preserved lemon and candied ginger.  My mom popped by shortly after I made it and, after tasting it, was more than happy to leave with a plateful to take home to enjoy later.  My husband came home from work and immediately dove into a slice, as did my kids.  Let’s just say that a cake of this size that should have lasted at least a day ended up lasting a few hours.

Combine the flour, baking soda, ginger, allspice and salt in a bowl.  Set aside. 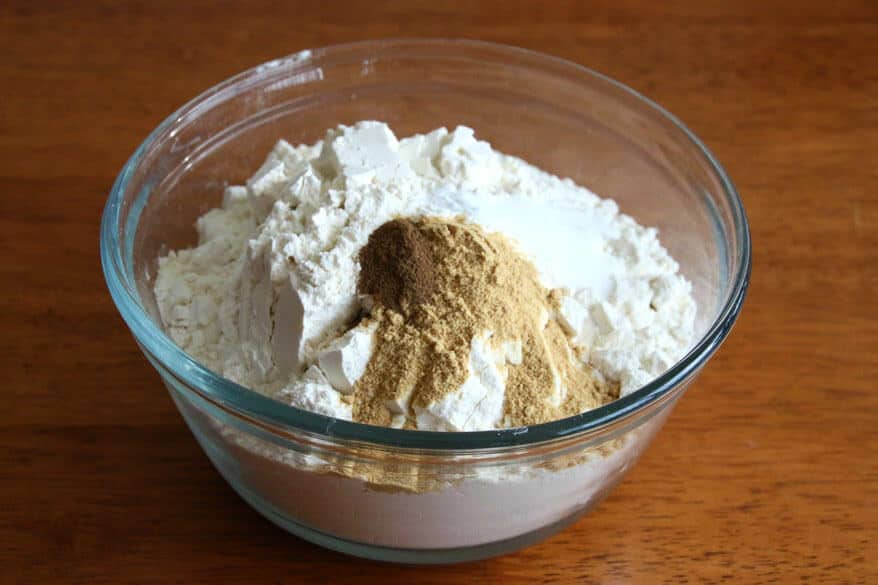 In a large mixing bowl, combine the white and brown sugar, butter, and coconut oil.  Beat with an electric mixer until fluffy. 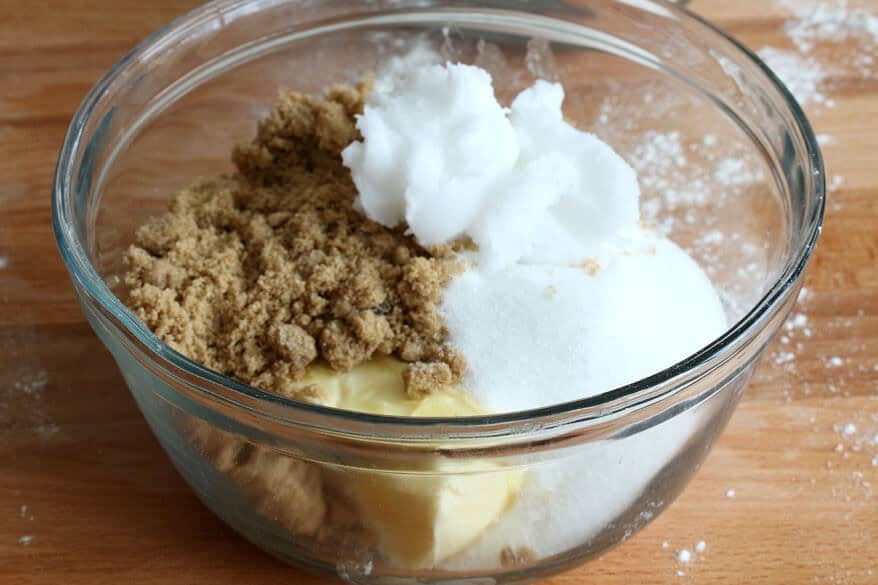 Add the eggs, one at a time, beating to combine. 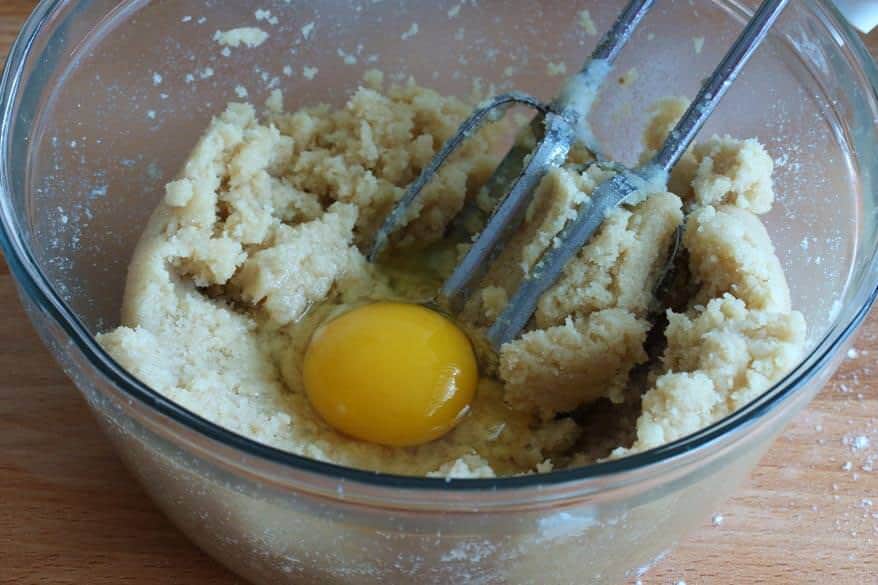 Cut up that glorious preserved lemon peel.  Be sure to discard the pulp and to rinse the peel thoroughly to remove any excess salt. 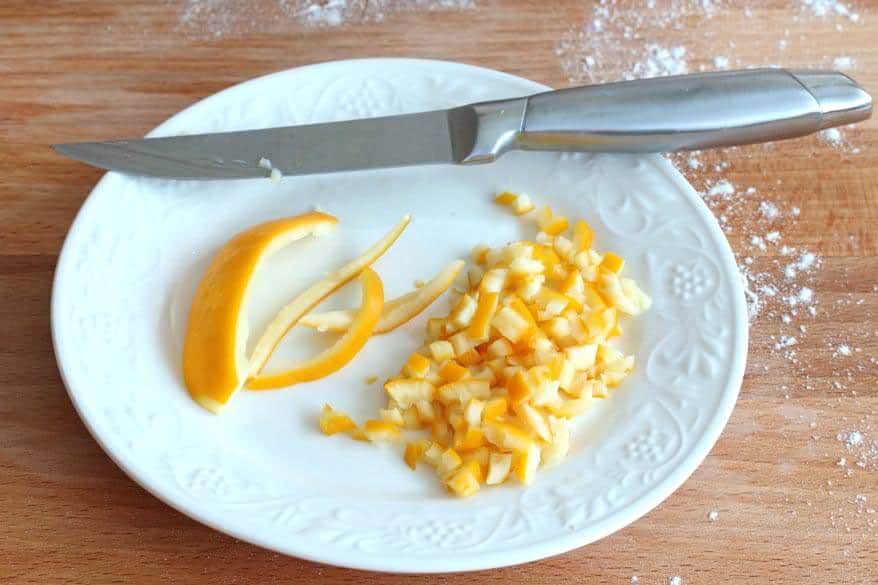 Chop up the crystallized ginger. 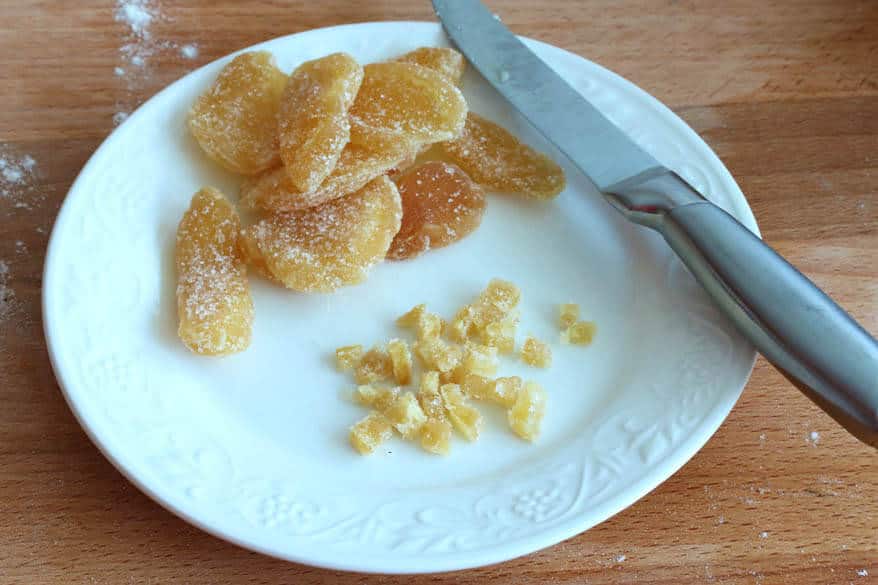 Toss the chopped crystallized ginger in a little flour.  This will prevent it from sinking to the bottom of the cake pan. 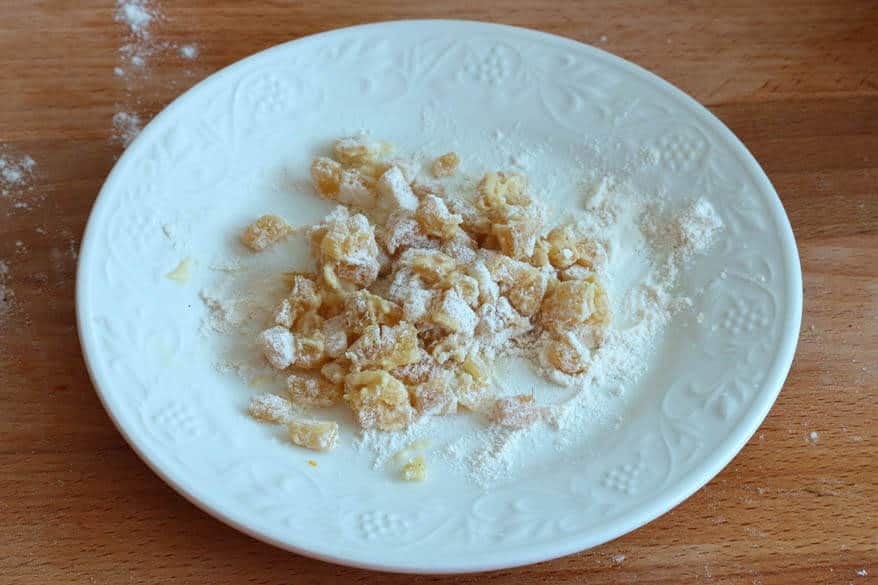 Add the preserved lemon, ginger, and vanilla extract to the batter.  Beat on low just until combined. 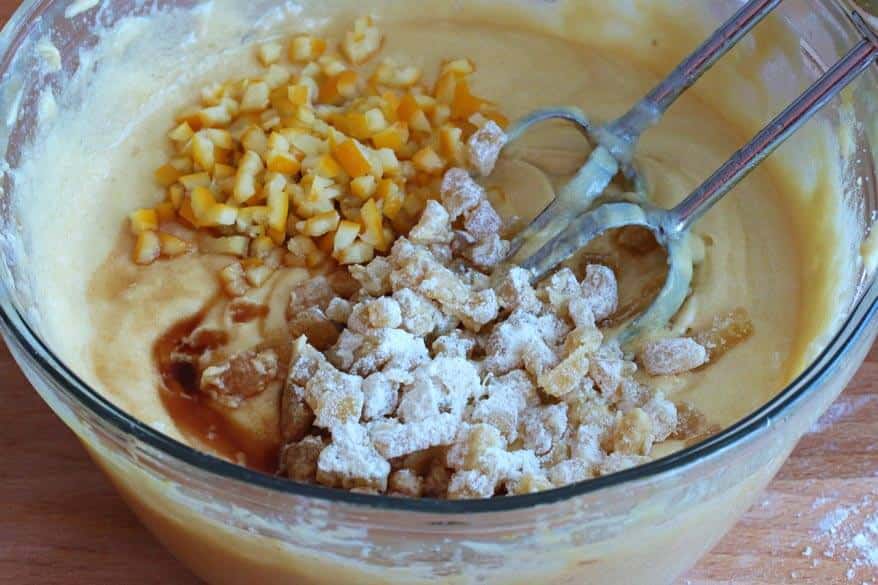 Add 1/3 of the flour mixture, beat on low just until combined. 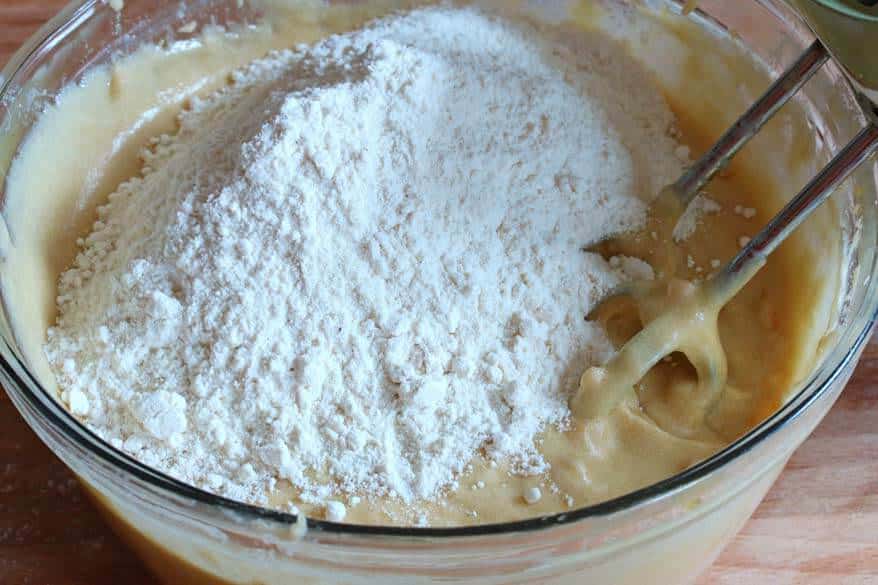 Add half of the buttermilk and beat on low just until combined.  Repeat (flour, buttermilk, and remaining flour). 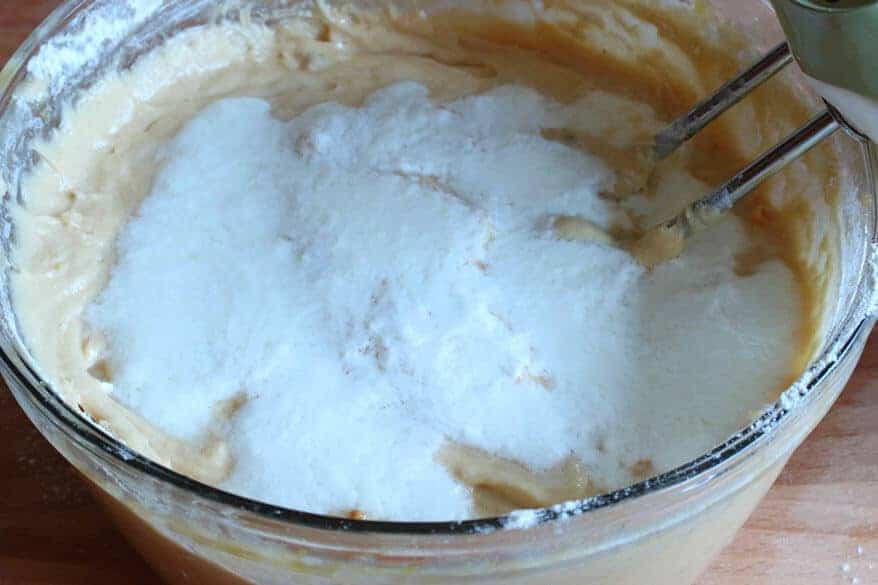 Butter and flour a Bundt pan. 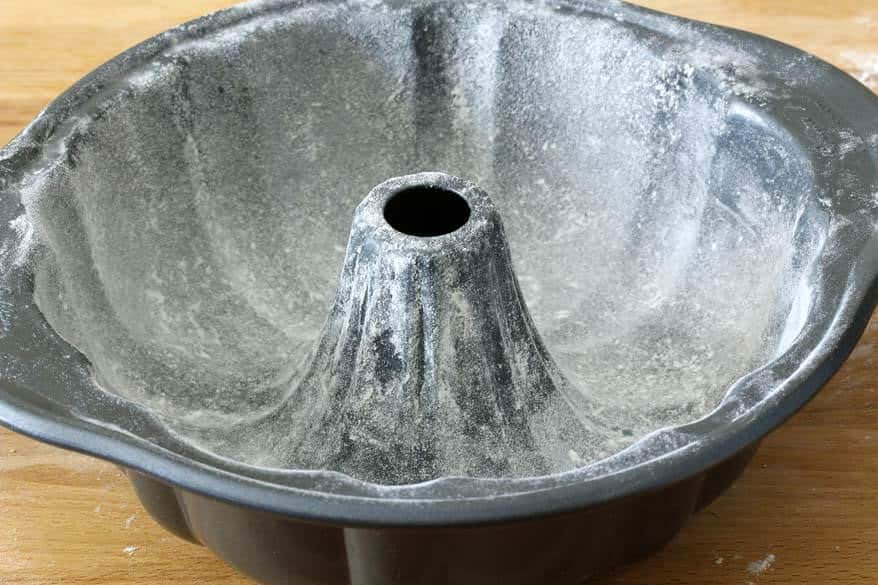 Spoon the batter into the Bundt pan. 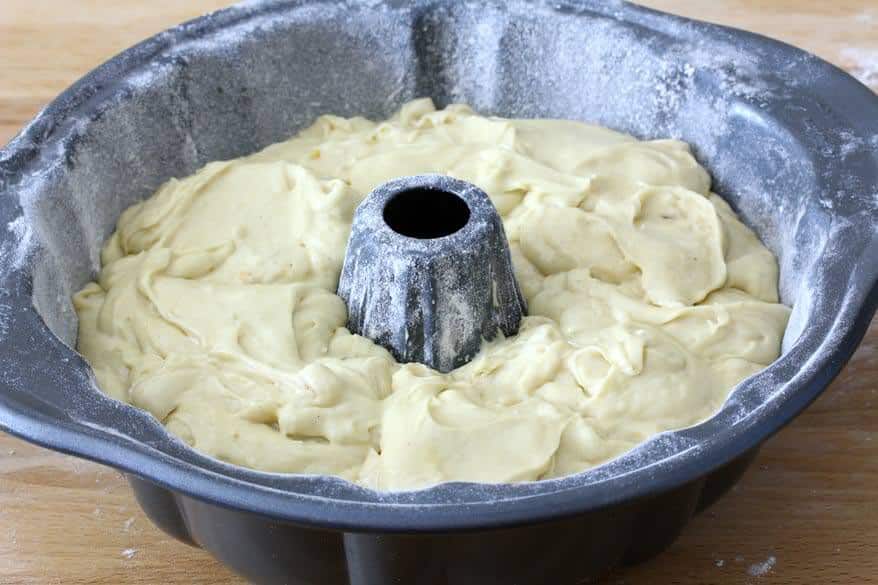 Bake in an oven preheated to 325 degrees F for about 1 hour and 10 minutes or until a toothpick inserted into it comes out clean. 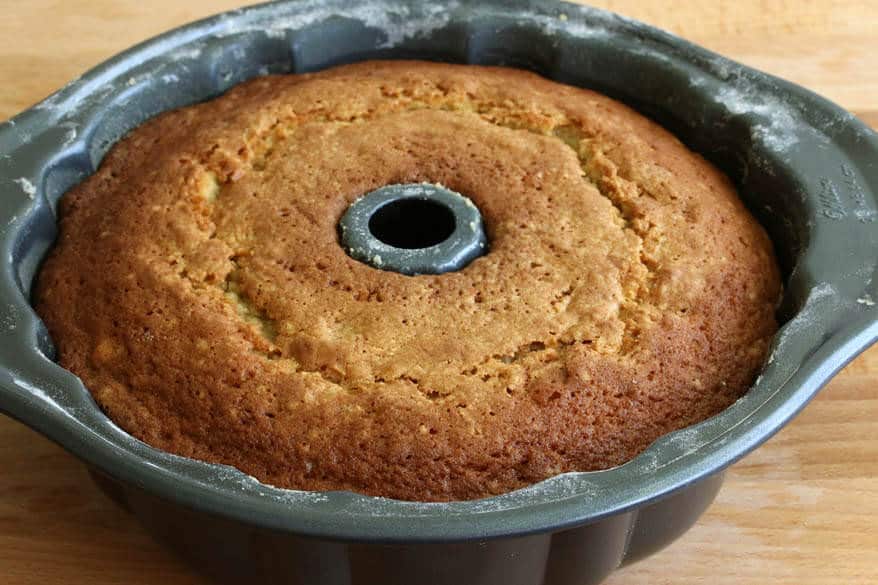 Let the cake cool in the pan for 10 minutes and then invert it onto a wire rack to cool completely. 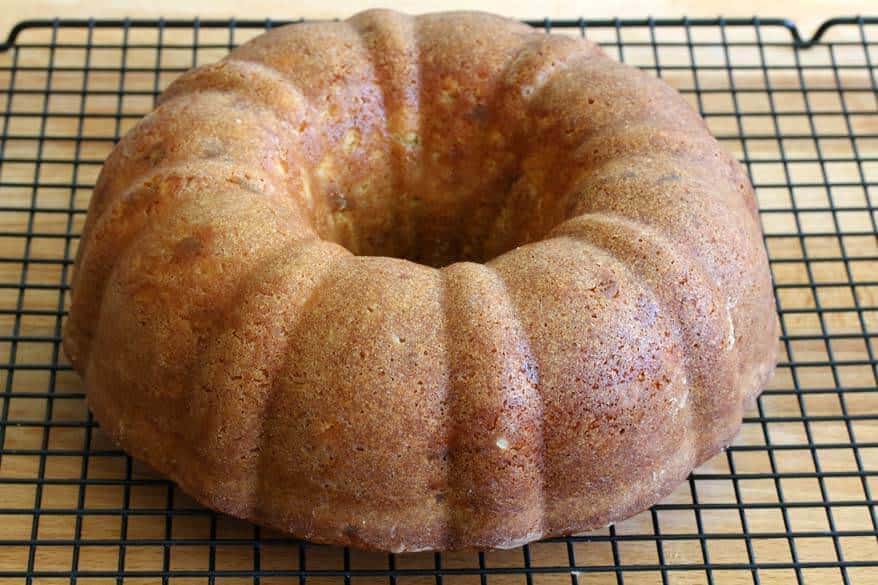 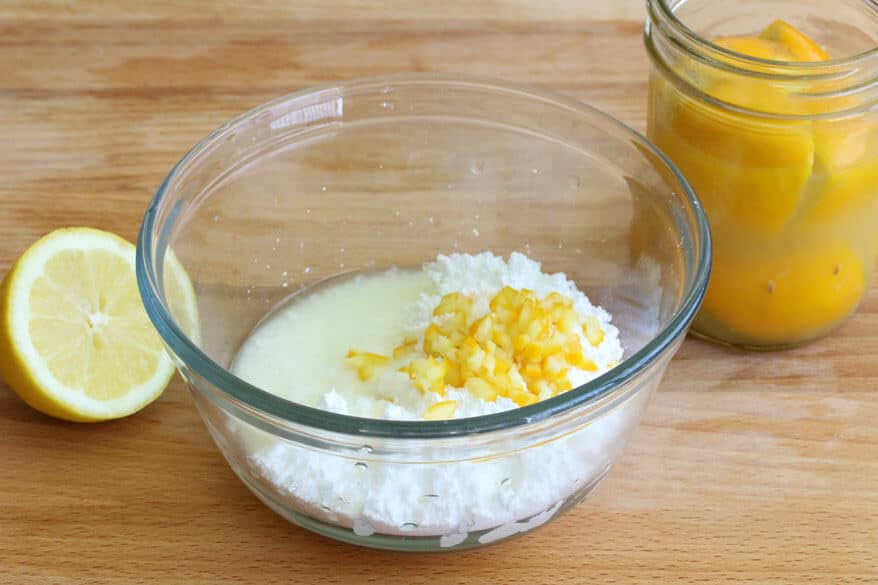 Drizzle the glaze over the cooled cake and let it sit for 20 minutes before slicing. 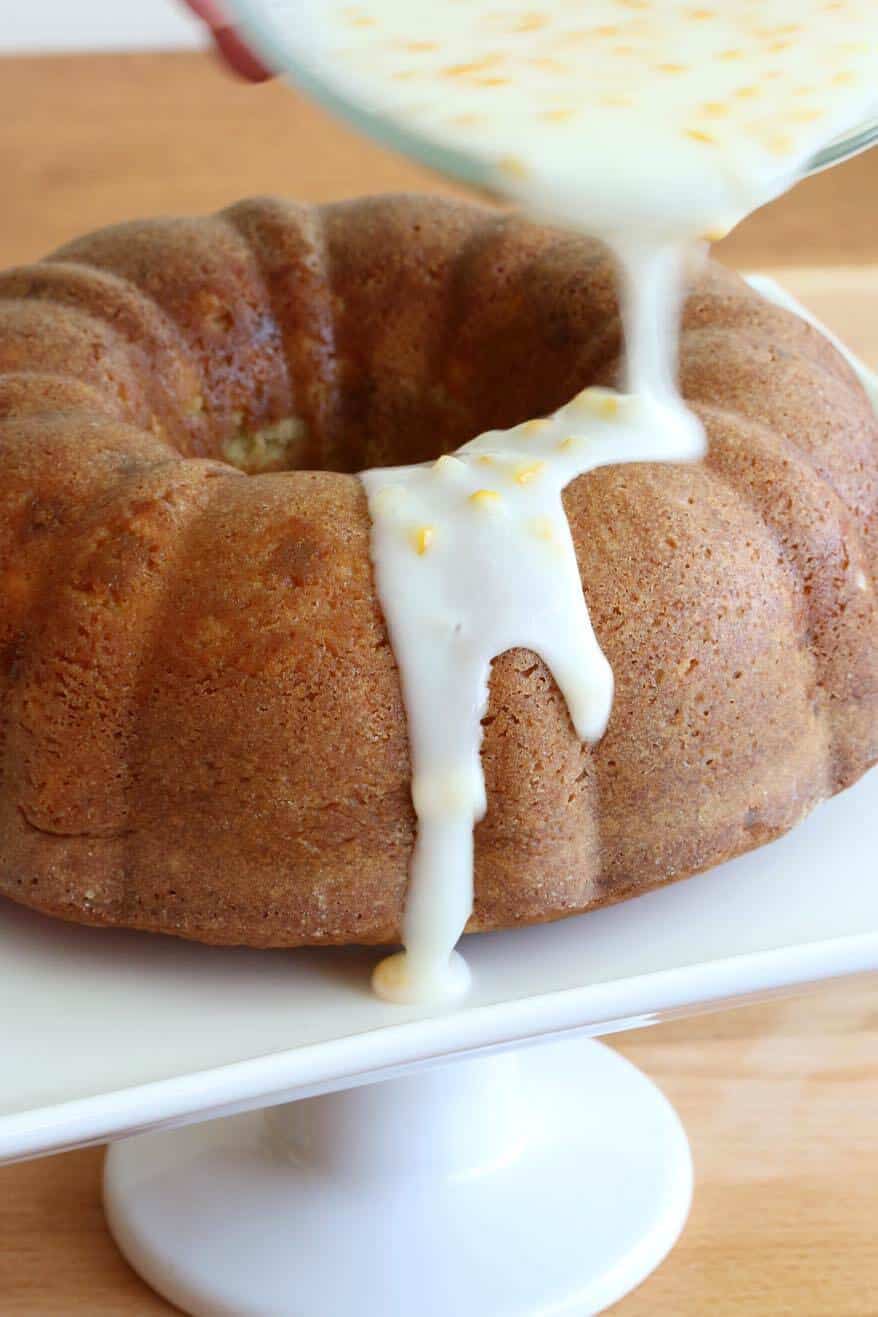 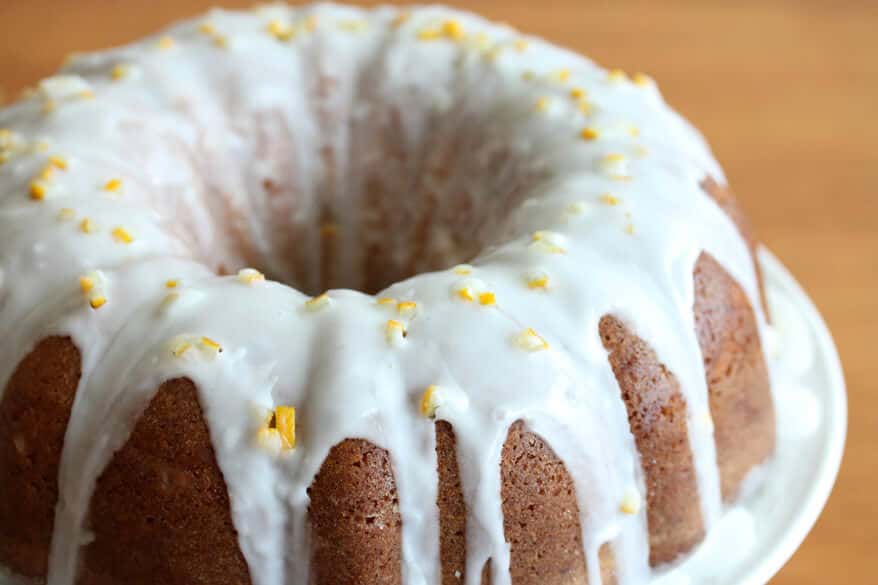 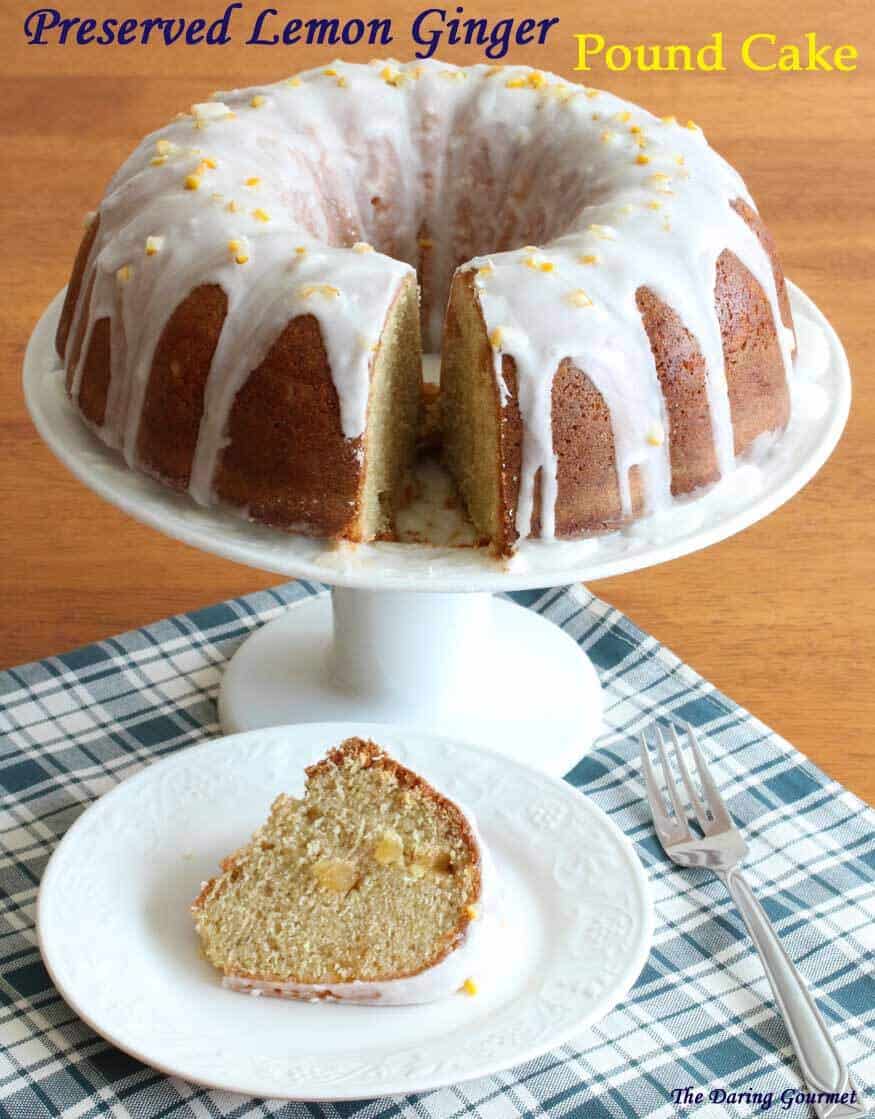 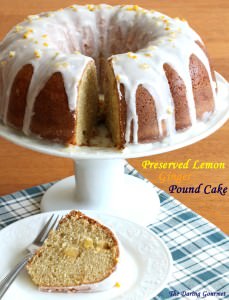 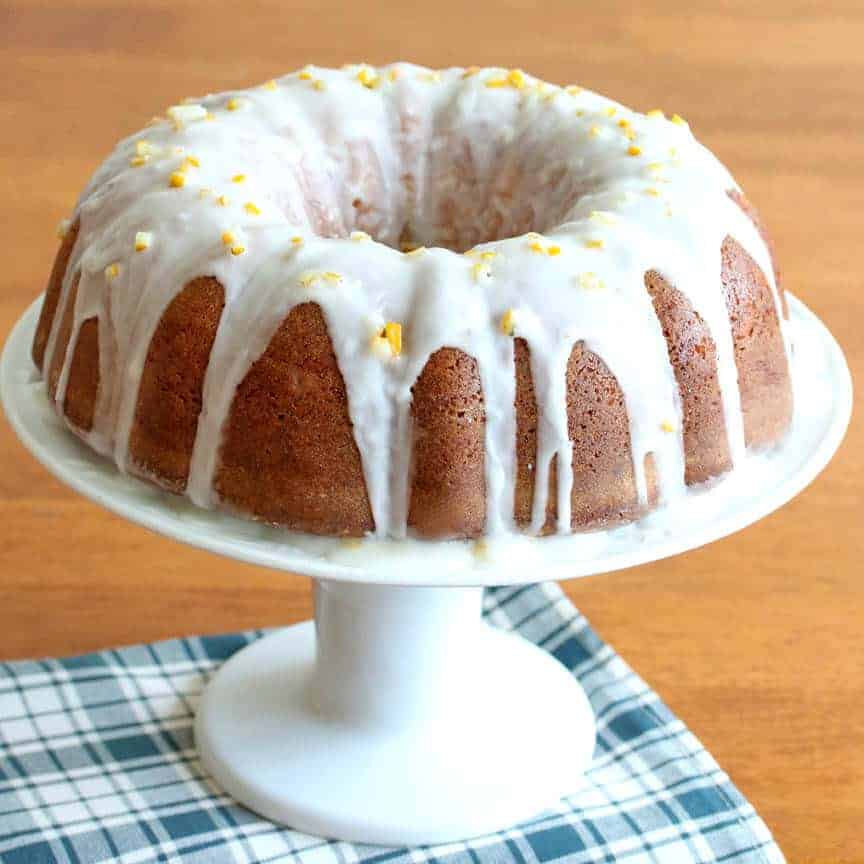