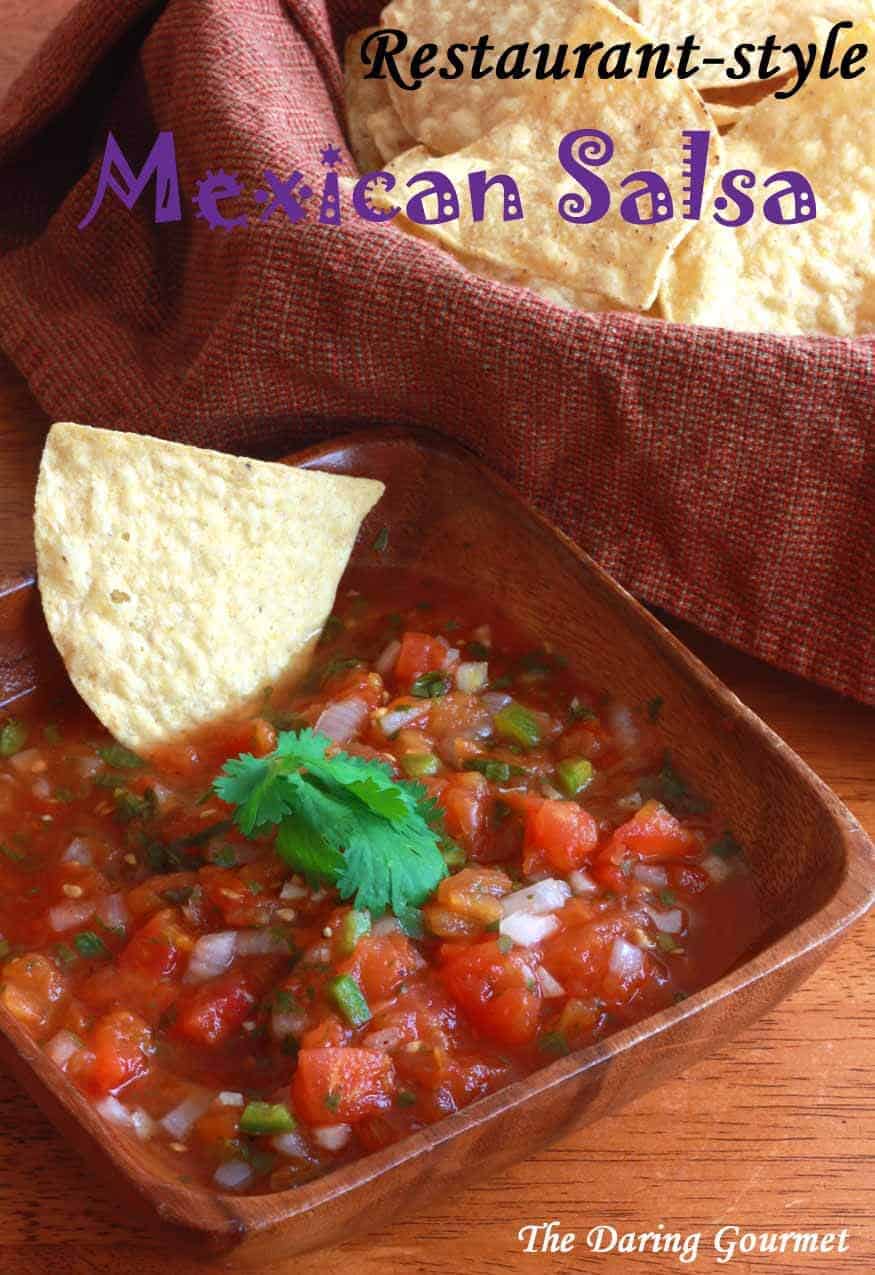 It’s National Tortilla Chip Day!  Who knew there was such a thing?  Well there is, and what better way to enjoy the crunchy tortilla chip than with a bowl of homemade salsa?

Crunchy tortilla “chips” originated in Mexico in the form of tostados.  But the famous triangle-shaped tortilla chip is credited to, or at least was popularized by, Rebecca Webb Carranza several decades ago in Los Angeles.  She and her husband owned a tortilla factory and their automated machines would discard any misshapen tortilla shells.  Rather than throw them away, Rebecca discovered that cutting these corn tortilla shells into triangles an then frying them made a fantastic snack.  Tortilla chips began to be mass produced in the 1940’s and their popularity spread outside of California and across the U.S. in the 1970’s.  Years later she received the Golden Tortilla Award for her contribution to the Mexican food industry.

Here is a tasty homemade salsa to accompany your crispy tortilla chips.  Many salsa recipes call for canned tomatoes and chilies (i.e., already cooked).  I find that using fresh ingredients, and then cooking the salsa briefly, yields the best flavor.  It sweetens the tomatoes and brings out their flavor.  (Note, canned tomatoes have also been semi-cooked)  The other purpose cooking it serves is to bring the mixture up to the required temperature for canning.

This recipe is ideal for canning so you can always have some salsa on hand for dipping and for any Mexican recipes calling for salsa. 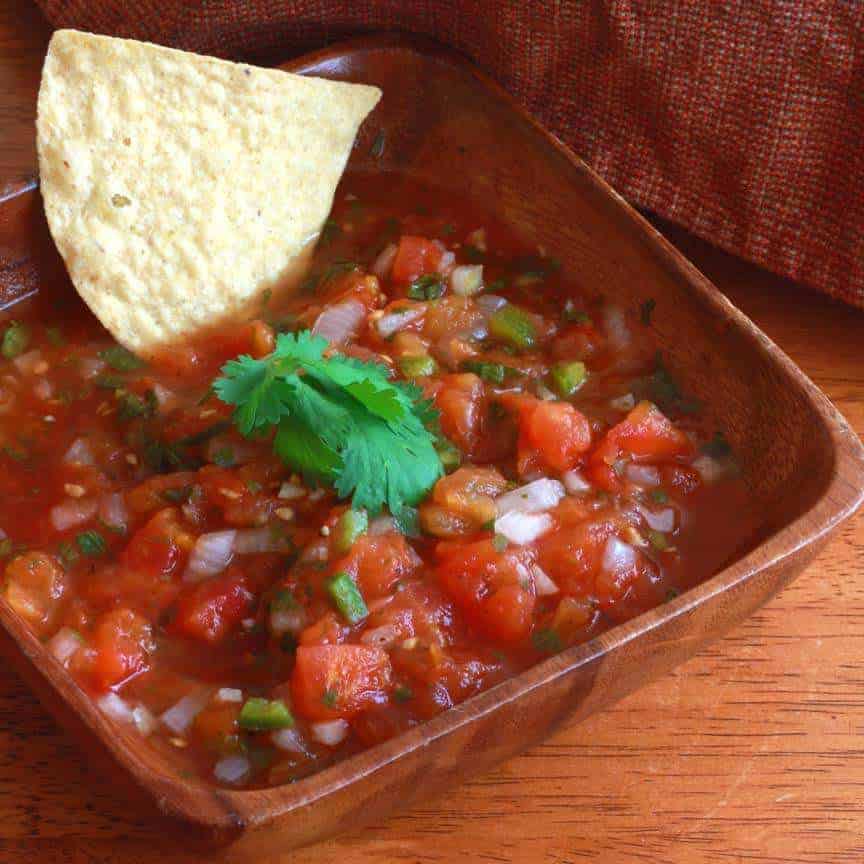 There always a debate as to which kinds of tomatoes are the best for making salsa.  The answer is simply this:  The best tomatoes are ripe tomatoes.  Whichever ones you can find that have the most flavor.  If they happen to have a higher water content, that’s fine.  We’ll drain them. 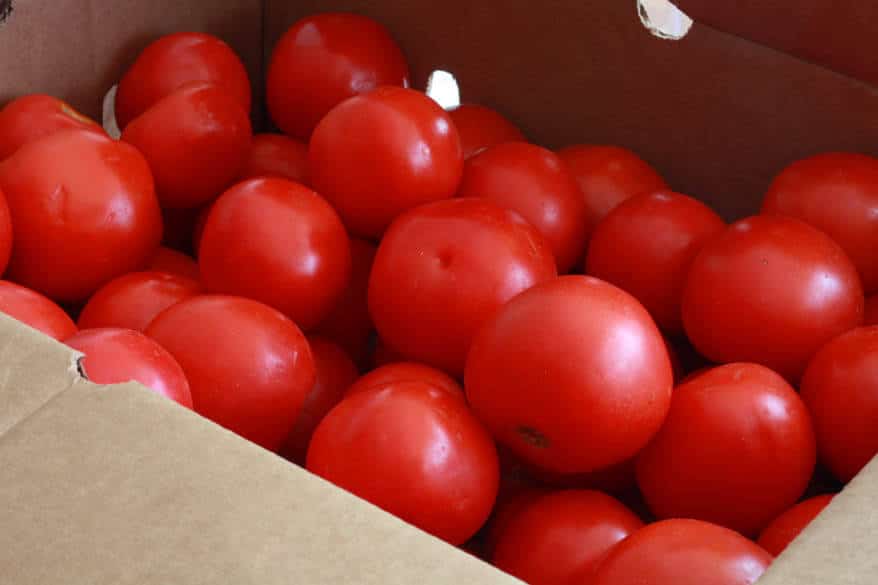 The best way to peel tomatoes is to get a large pot of water boiling and then place the tomatoes in the boiling water for 30 seconds.  (Some suggest placing them in ice water next, but that isn’t necessary for this recipe)  When you remove the tomatoes from the boiling water their skins will start to split (you may need to assist them by piercing them with the tip of a knife) and they can then be easily peeled. 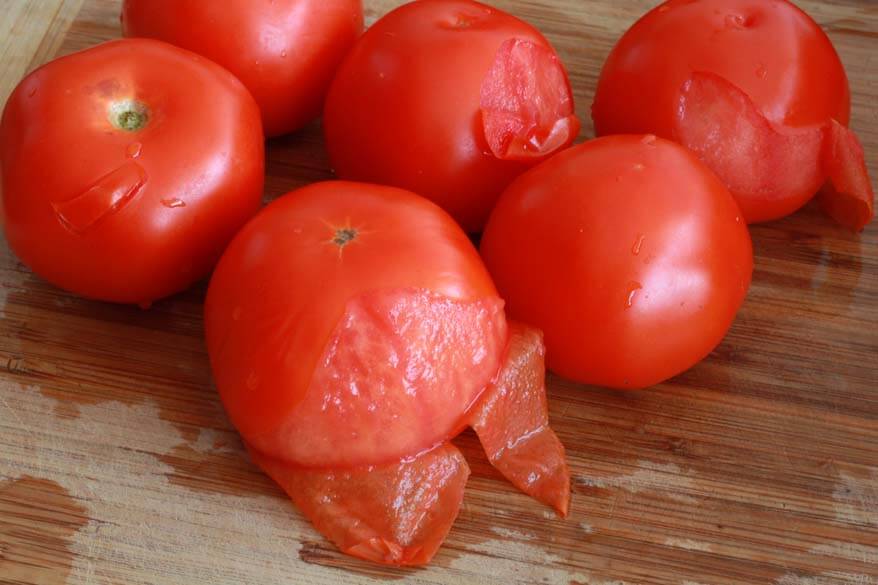 Squeeze the seeds out of each tomato along with any excess liquid and place the tomatoes in a colander to drain. 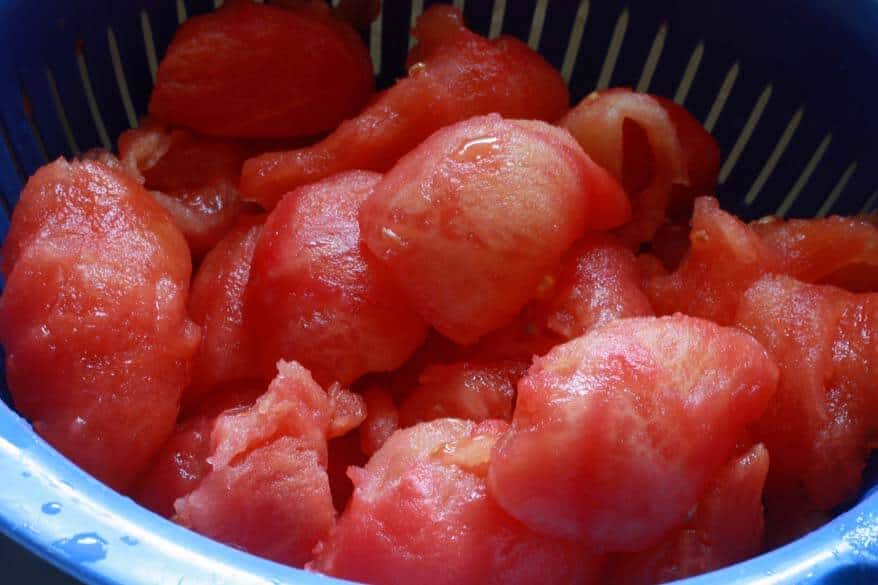 Finely chop the tomatoes.  I prefer to do it by hand, but you can also use a food processor. 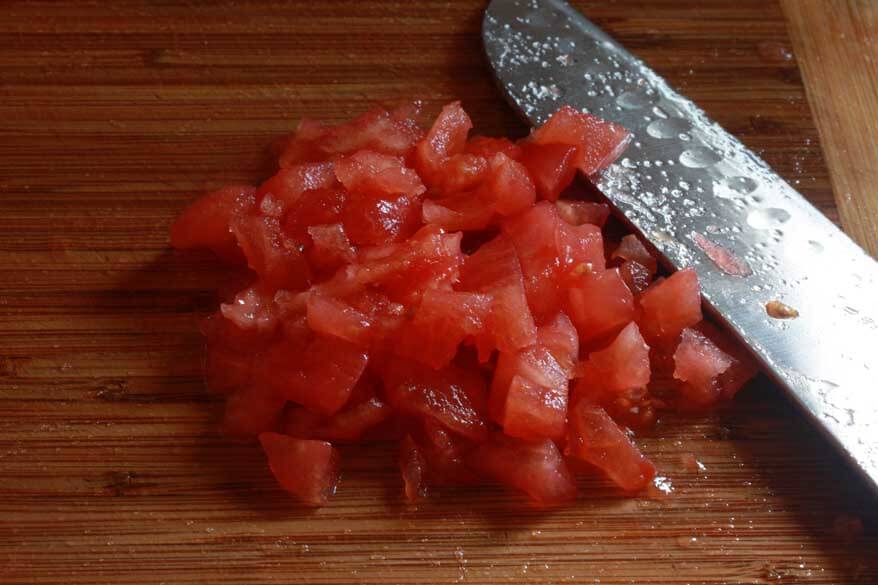 Place the chopped tomatoes in a large stock pot. 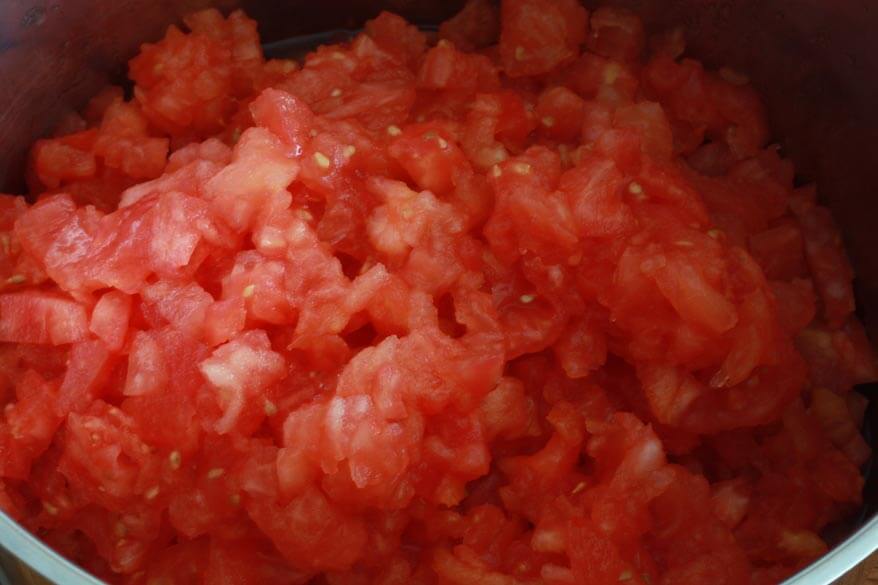 Chop the onions and mince the garlic. 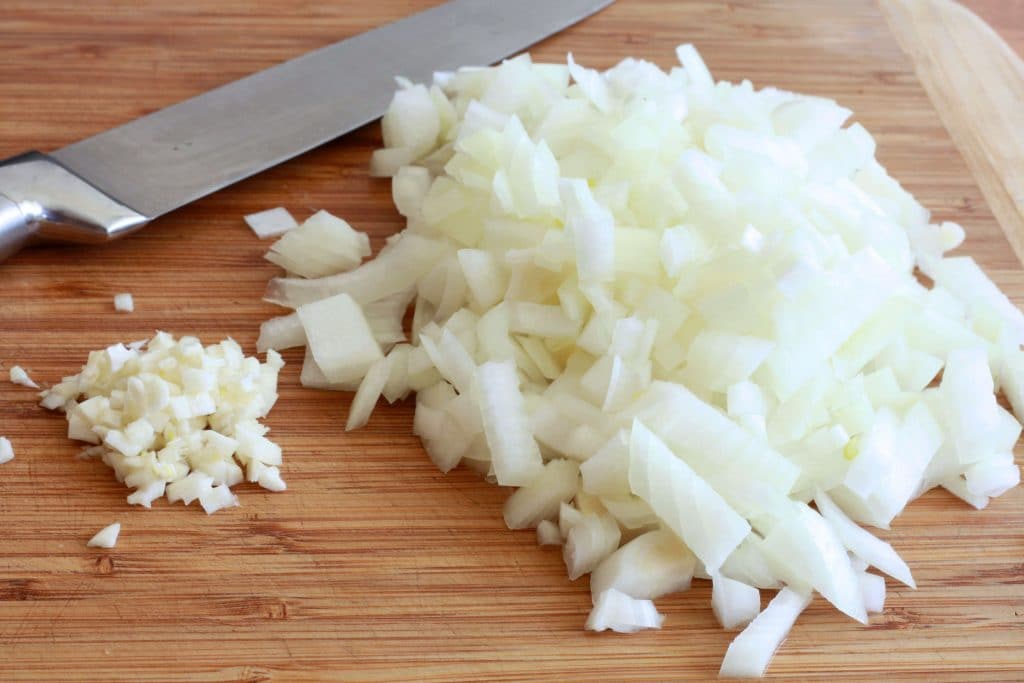 Chop the jalapeno peppers.  If you like your salsa hot, leave the white pith/membranes.  Contrary to popular belief, it’s not the seeds that are hot, it’s the white pith that surrounds them.  It’s always recommended that you use gloves while handling chili peppers. 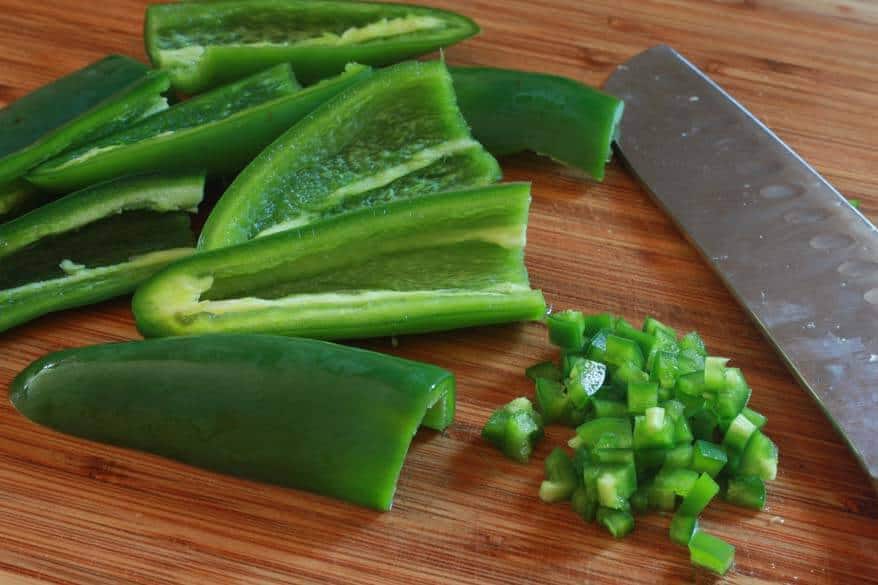 Wash and chop the cilantro. 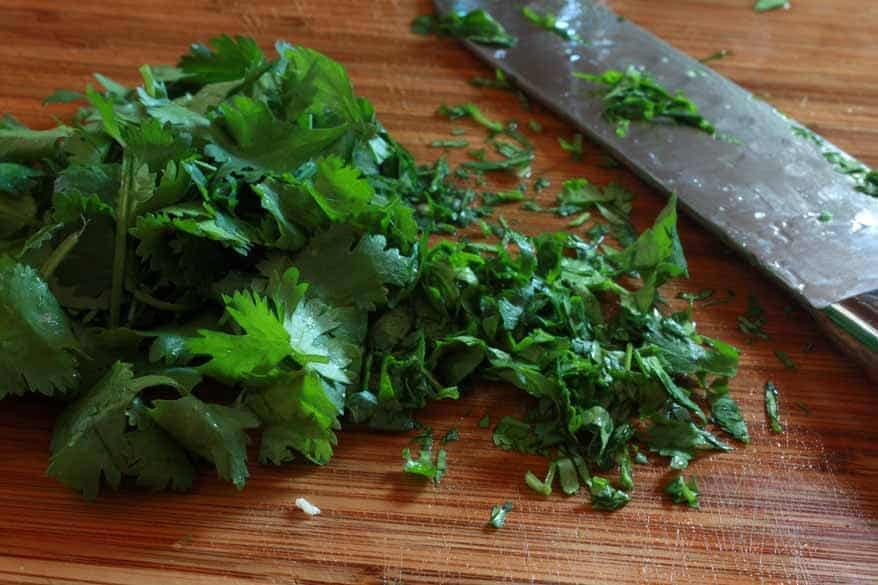 You’ll want about a cup of chopped jalapenos. 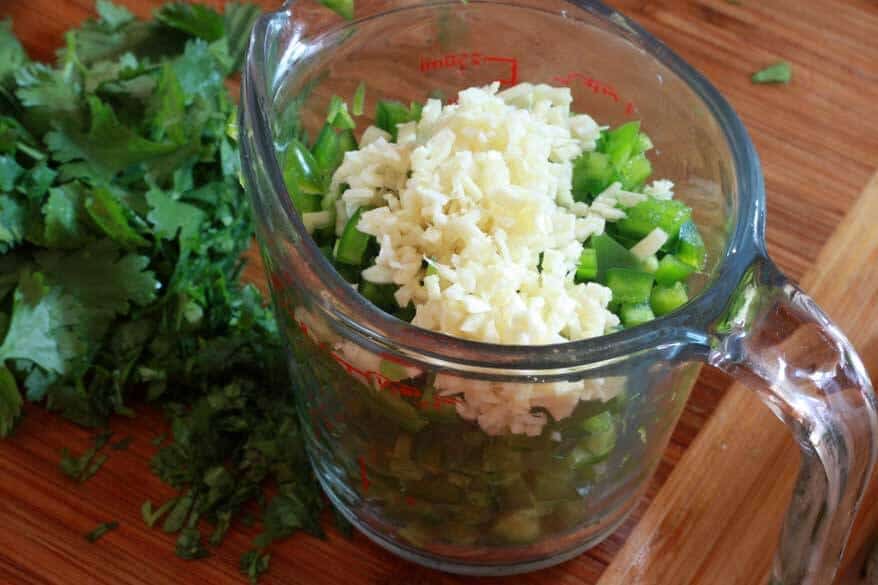 Add the vinegar to the tomatoes. 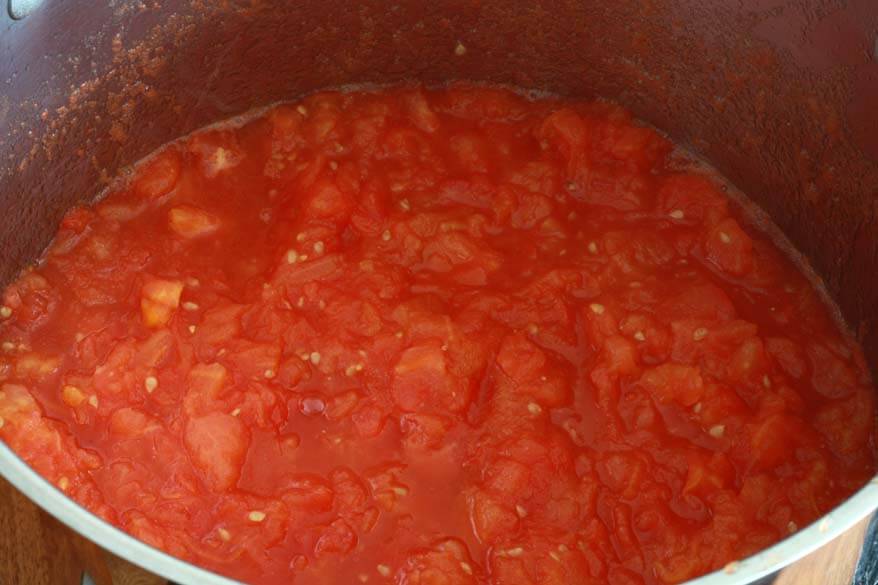 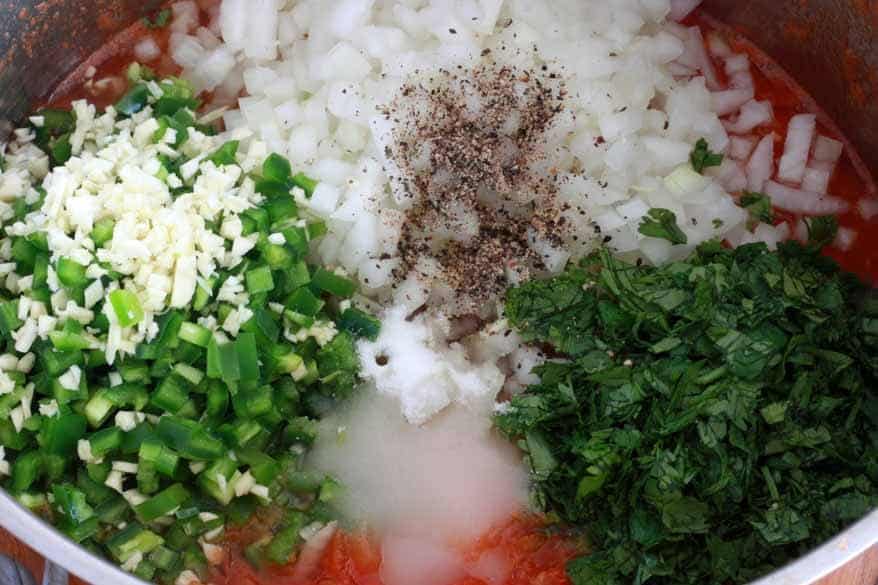 Stir to combine the ingredients, bring it to a boil, reduce the heat to medium and simmer for 10 minutes. 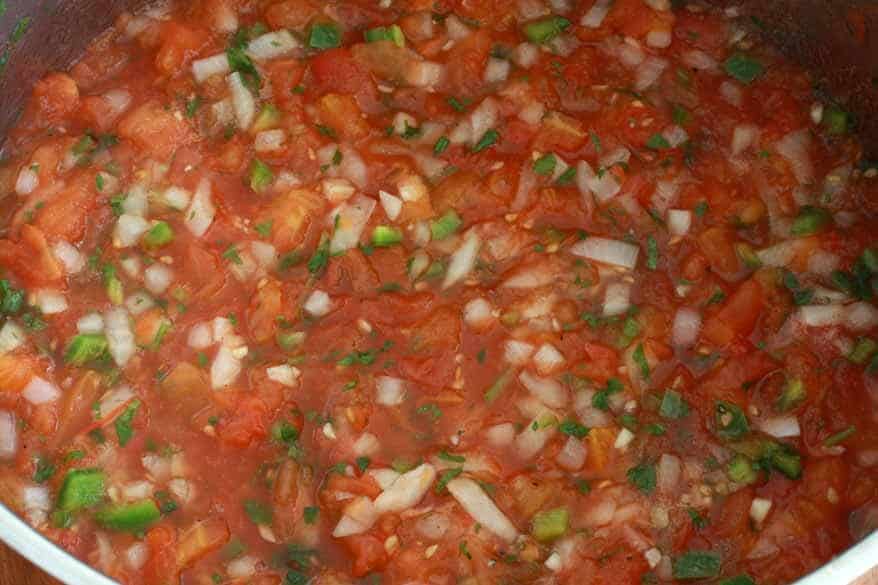 Follow standard canning instructions to sterilize the jars and lids.  Ladle the hot salsa into the hot jars, leaving about 1/4 inch head space.  Close the lids and place the jars in a boiling water bath for 15 minutes.  Remove the jars and let them rest, undisturbed, for 24 hours before moving them. 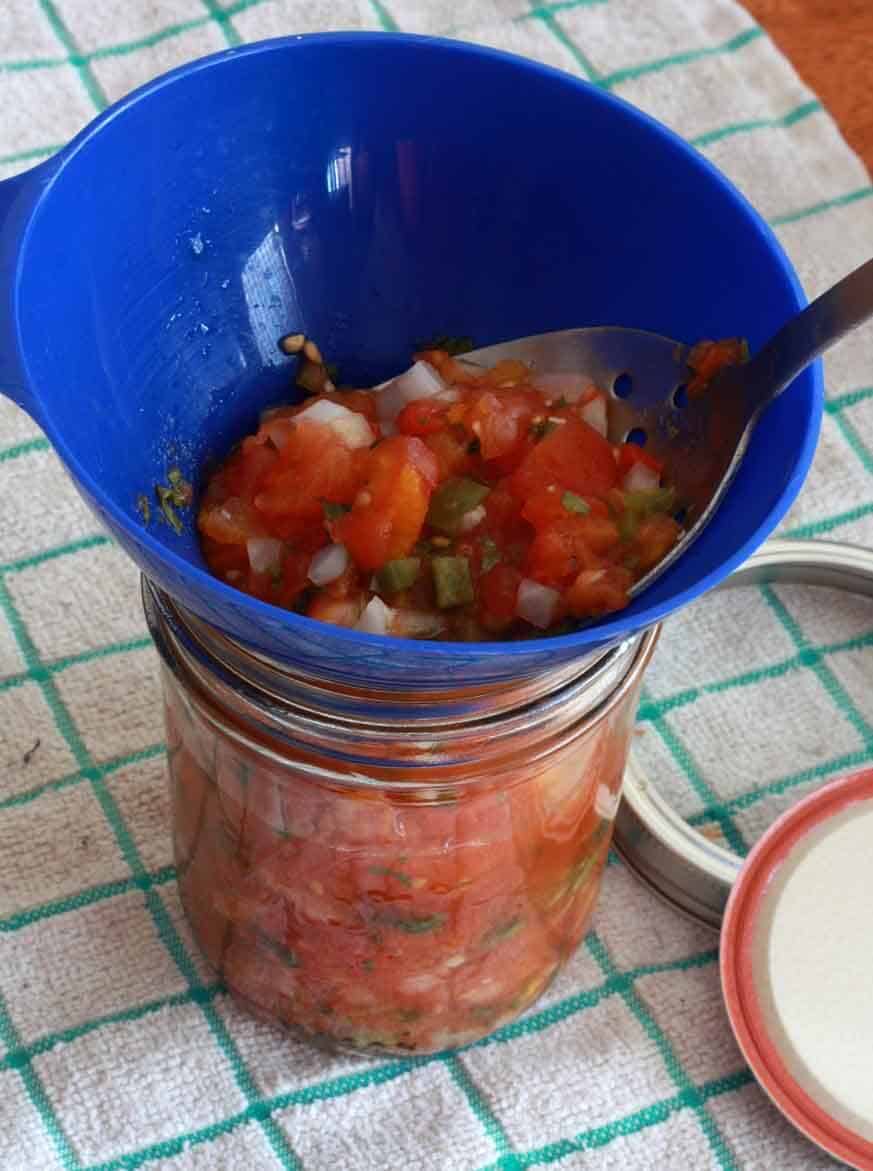 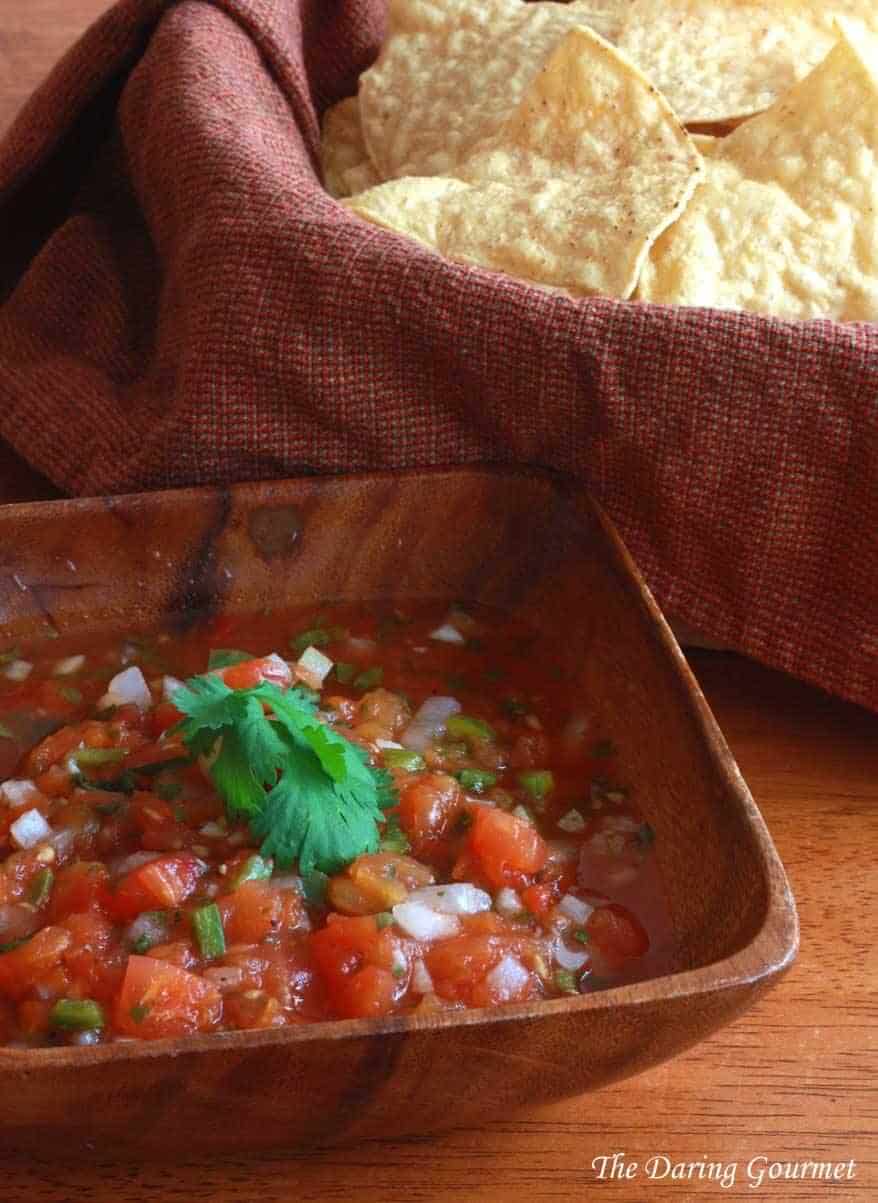