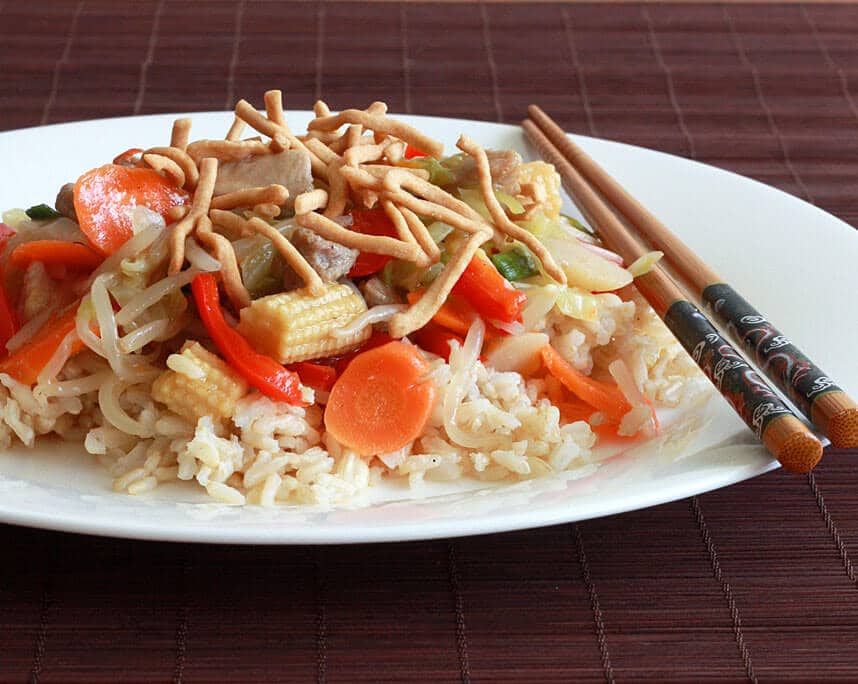 Good food is therapeutic.  It adds spice to life, offers comfort for the “blah’s”, provides warmth on a cold evening, coolth on a hot day…and helps unravel and unfrazzle you after having spent two hours in bumper-to-bumper traffic on the cursed I-5 headed south of Seattle during rush hour!!  Just hypothetically speaking.

Food is good.  Food is helpful.  Food is our friend.  Whether it’s a cup of hot chocolate, a glass of cold lemonade, some freshly baked chocolate chip cookies, or…drum roll…a hot plate of chow mein!

Believe it or not, Chow Mein was one of the Father’s Day requests in my family.  We celebrated Father’s Day with my parents and I asked my husband and dad what their meal requests were.  My dad requested Chow Mein and Todd requested British Bangers and Mash with mushy peas!  (Do I have very unique men in my family or what?)  Well, there was hardly a fitting compromise for such  vastly different dishes, so I made both.  Yep, for Father’s Day we had Chinese Chow Mein and British Bangers and Mash with mushy peas!  It must have been the oddest combination of food Father’s Day has ever seen.  But the end result was two very satisfied daddy’s and that’s really what mattered, right?

Chow Mein, which means “noodles,” is an Americanized Chinese dish of Canton influence.  It was at its peak in popularity in the 50’s and 60’s and though it’s a little more challenging to find it nowadays in Chinese restaurants, some will make it on request.  There are many variations of chow mein.  It first appeared as a dish or vegetables and chicken tossed with fresh egg noodles.  Other versions soon evolved (many of them regional differences between the East and West coast) including ones with a thicker sauce of vegetables and chicken served with deep-fried crunchy egg noodles and served with or over rice.  This recipe is easily adapted to your preferences.  If you prefer fresh egg noodles, toss them with the sauce at the end.  Or you can the sauce with/over rice and/or deep-fried crunchy egg noodles.  And as for the meat, prefer pork?  Use pork!  Prefer shrimp?  Use shrimp!  Whatever combinations you choose, you’re going to enjoy this chow mein.  I call it “ultimate” because not only does it taste fantastic, it’s packed full of a ton of healthy veggies!

If you’re worried about calories you don’t have worry with this one.  Just limit the rice/noodles and load up on the vegetable-chicken stir-fry to your heart’s content!

Super-duper simple to make.  And the actual cooking takes less than 10 minutes.  It’s the prep work of slicing and chopping all the vegetables that takes some time, but that can all be done in advance.

NOTE:  There are East and West Coast variations of this Chinese-American dish and many locations on the East Coast serve chow mein with rice instead of noodles.  We’re going with the East Coast’s variation this time but feel free to substitute noodles. 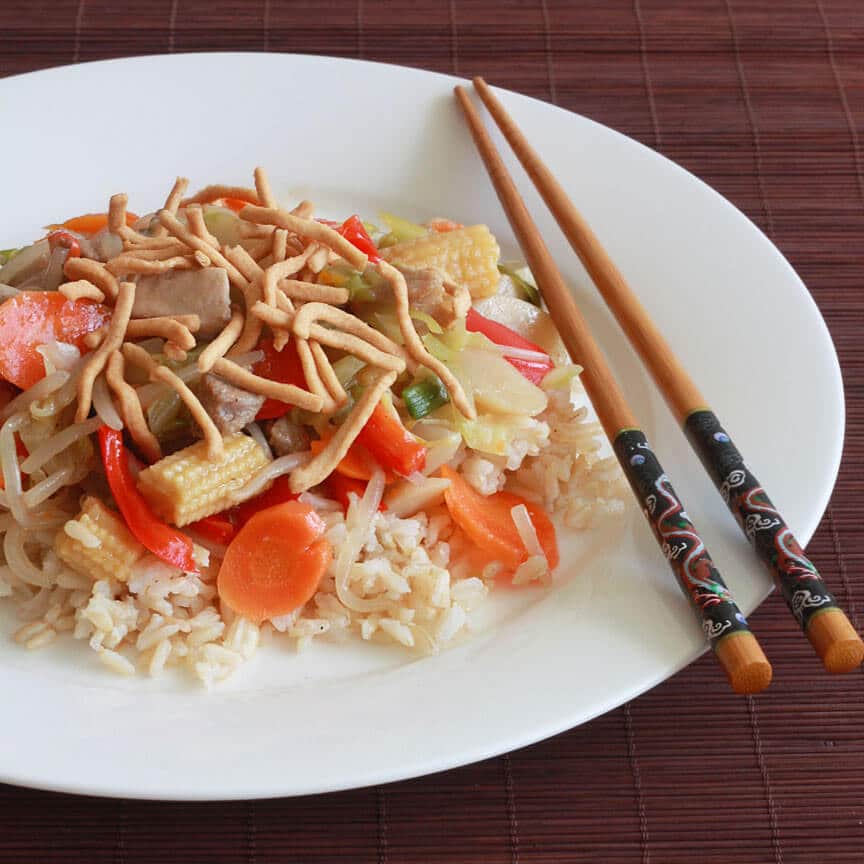 Dice up the chicken or pork. 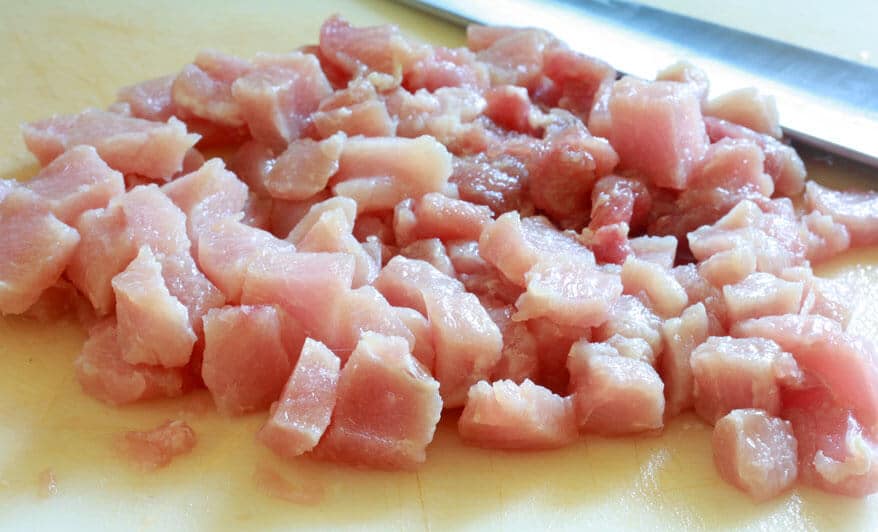 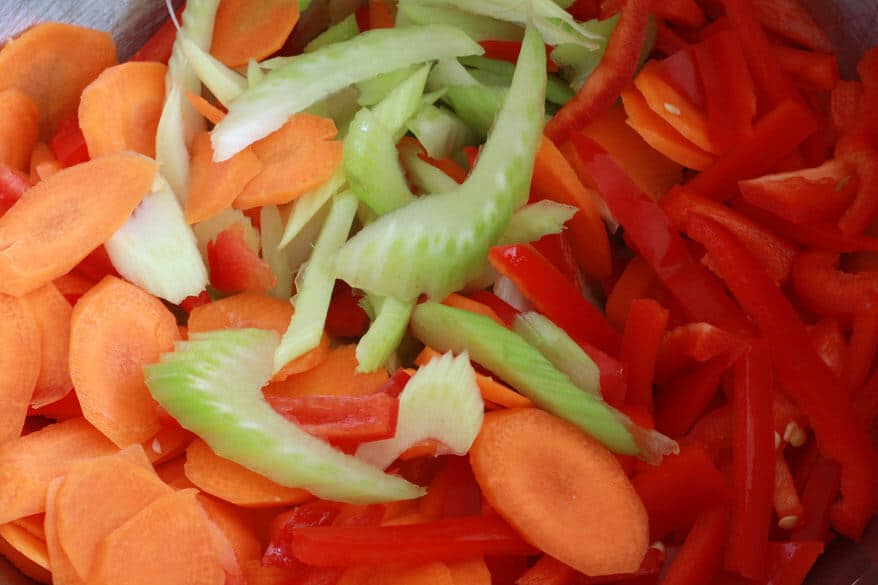 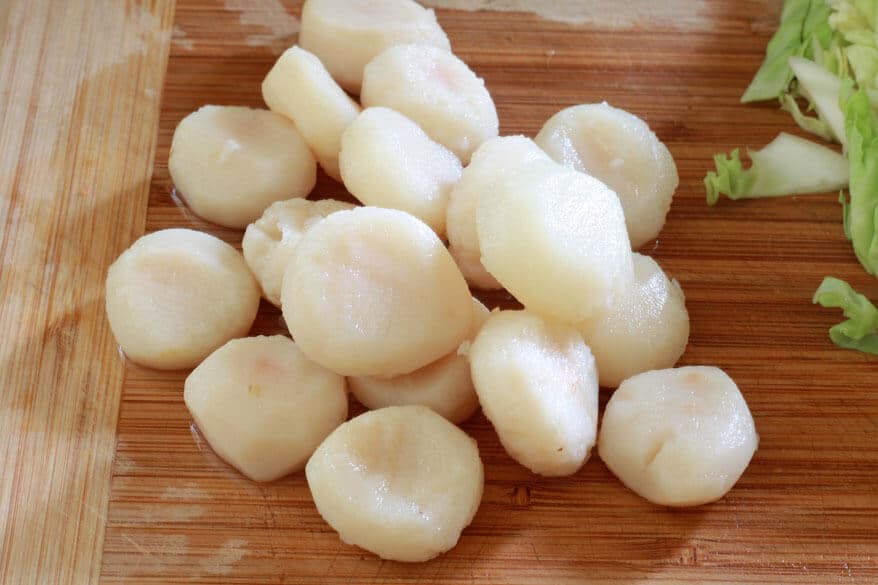 Wash and drain the bean sprouts. 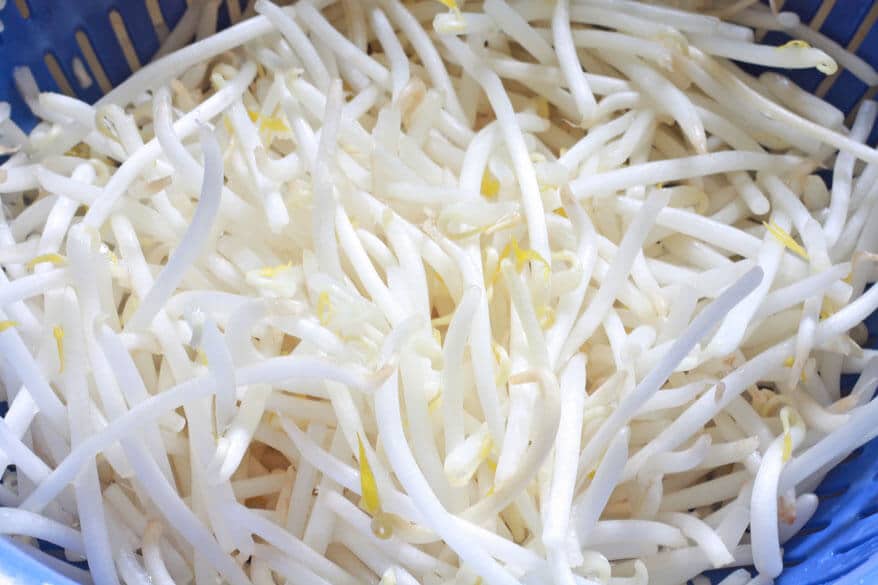 Drain the baby corn and chop the green cabbage. 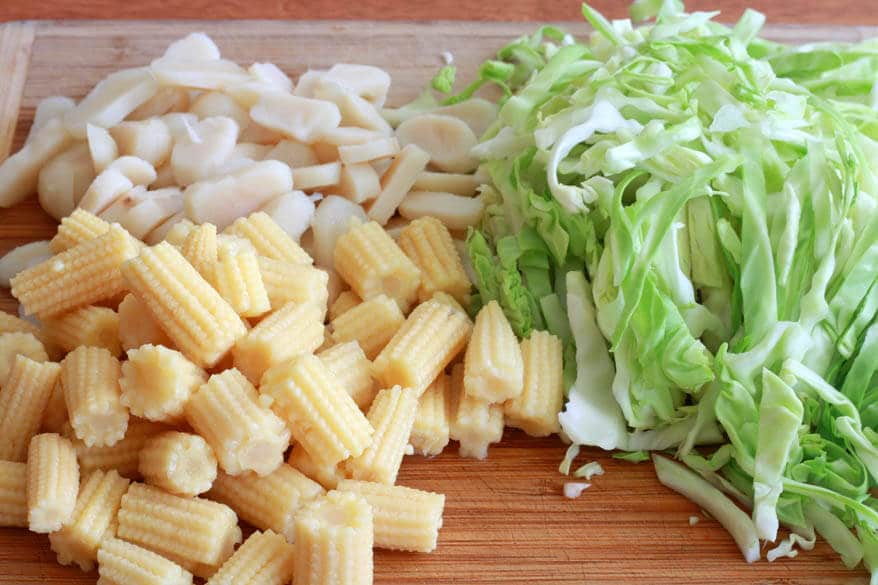 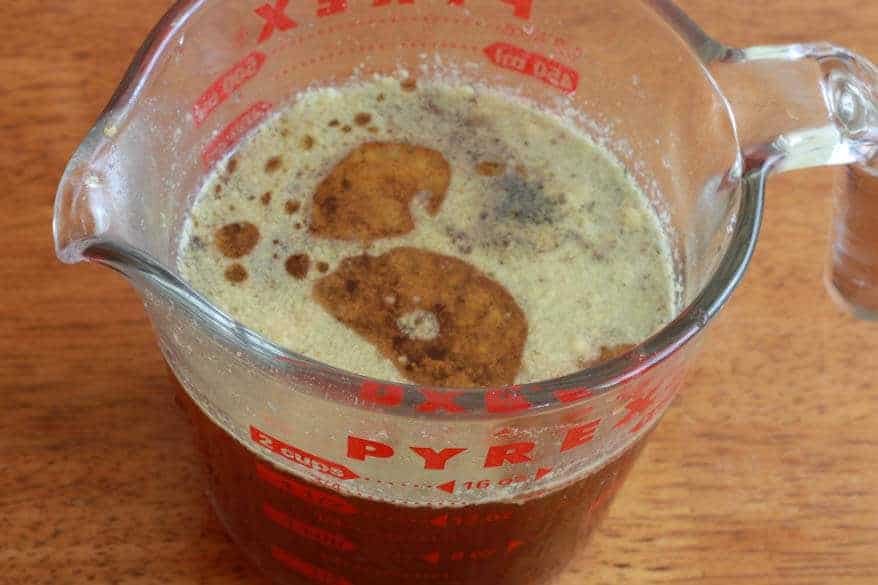 Heat the oil over high in a wok or large skillet and cook the meat until done. 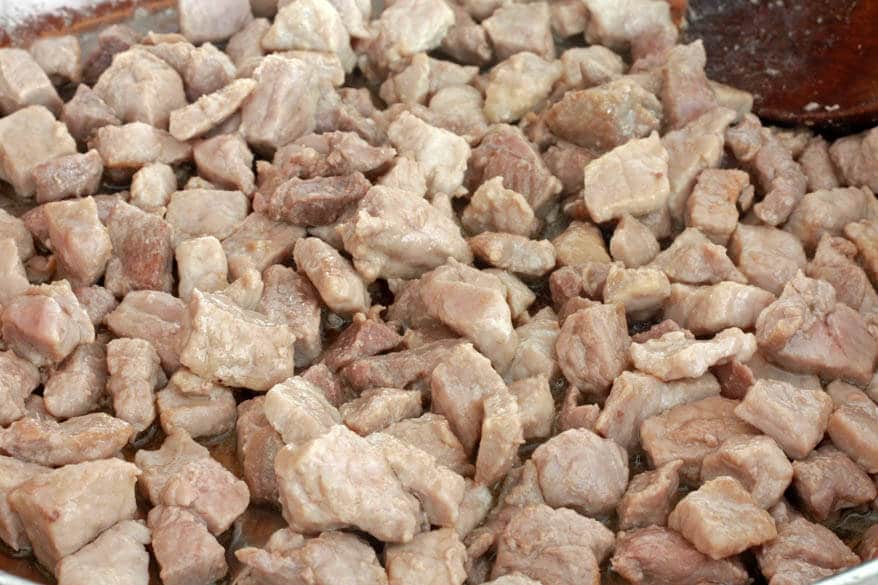 Add the celery, carrots and bell pepper and cook for another 3 minutes. 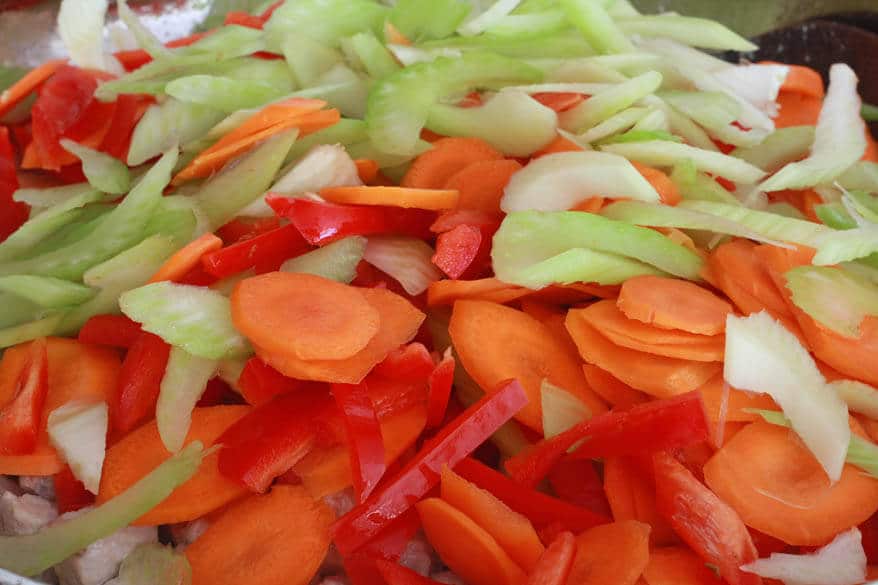 Add the cabbage, water chestnuts and baby corn and fry for another minute or two.  Add the sauce and stir to combine.  Bring to a simmer until thickened. 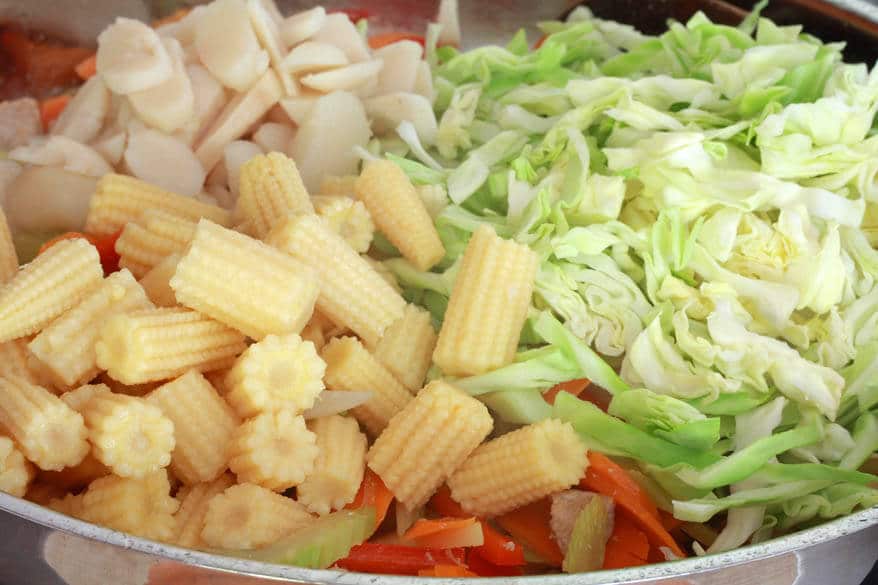 Add the bean sprouts and stir to coat. 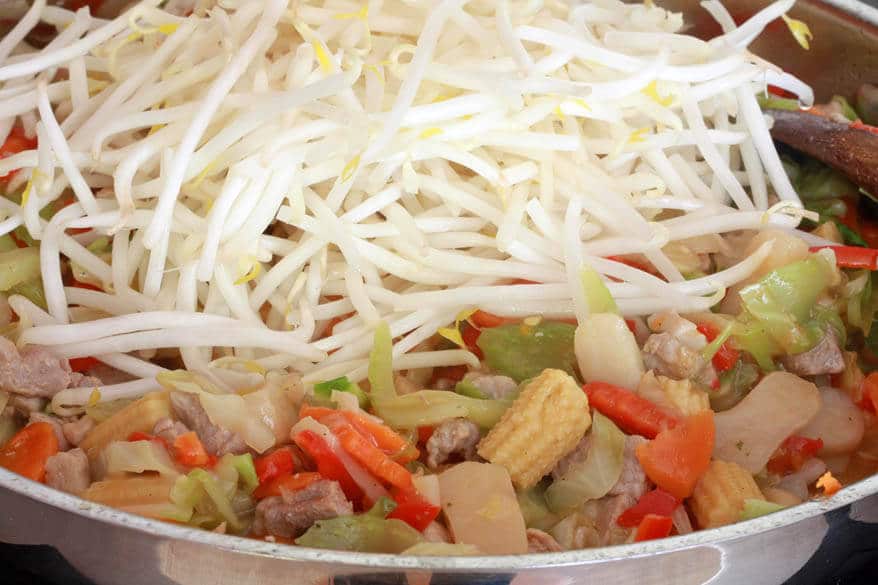 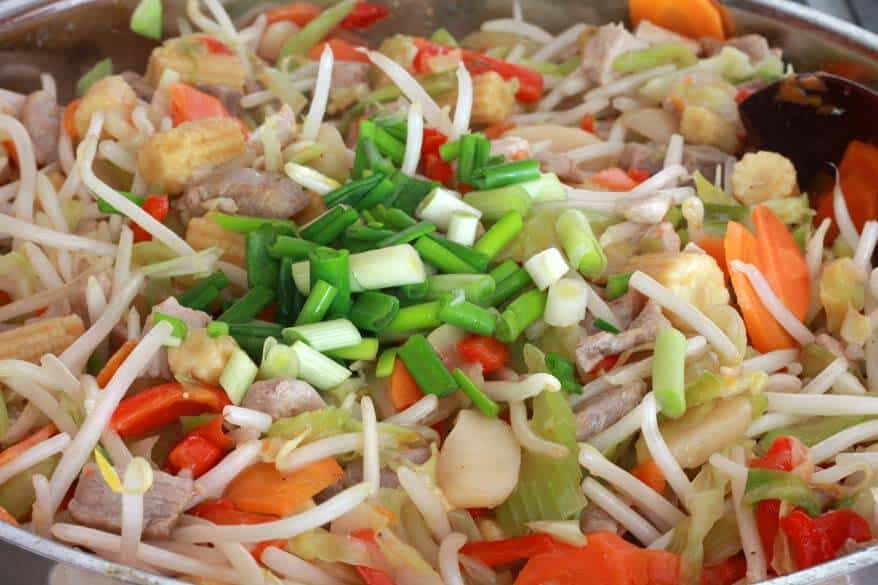 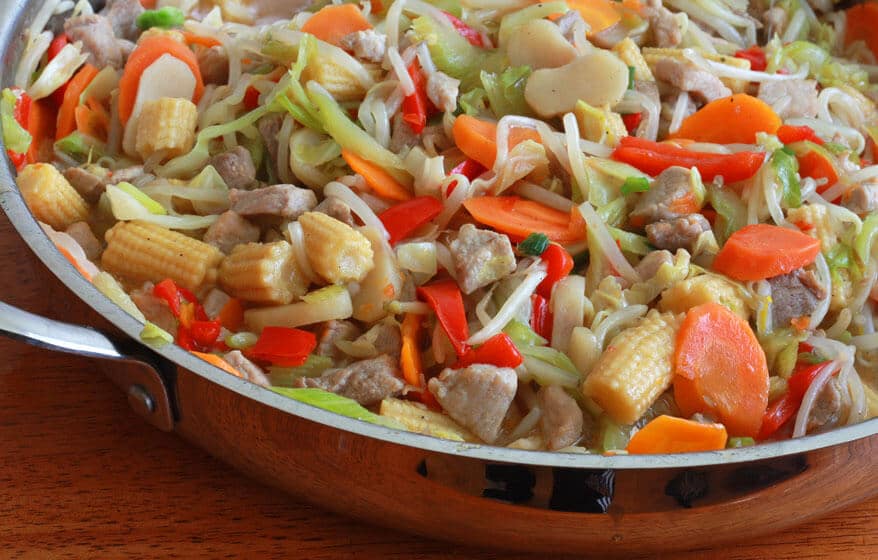 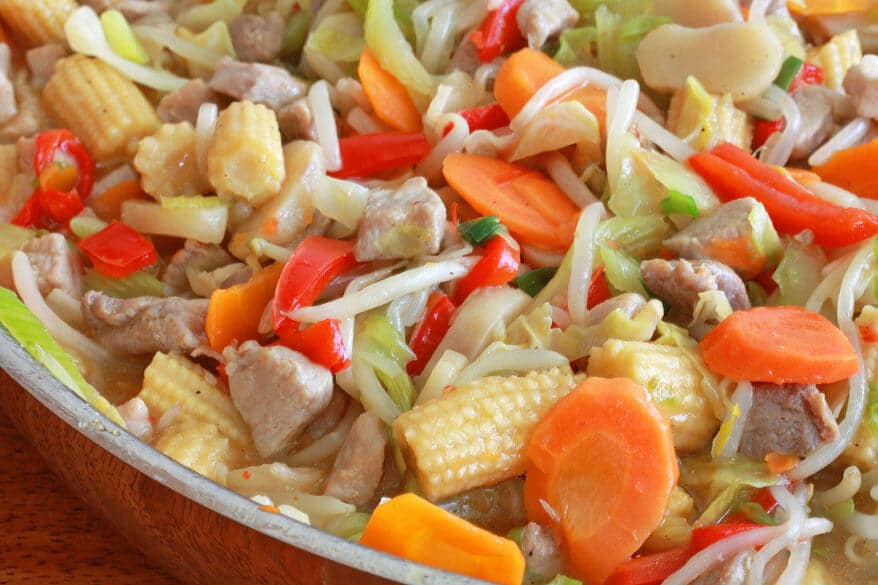 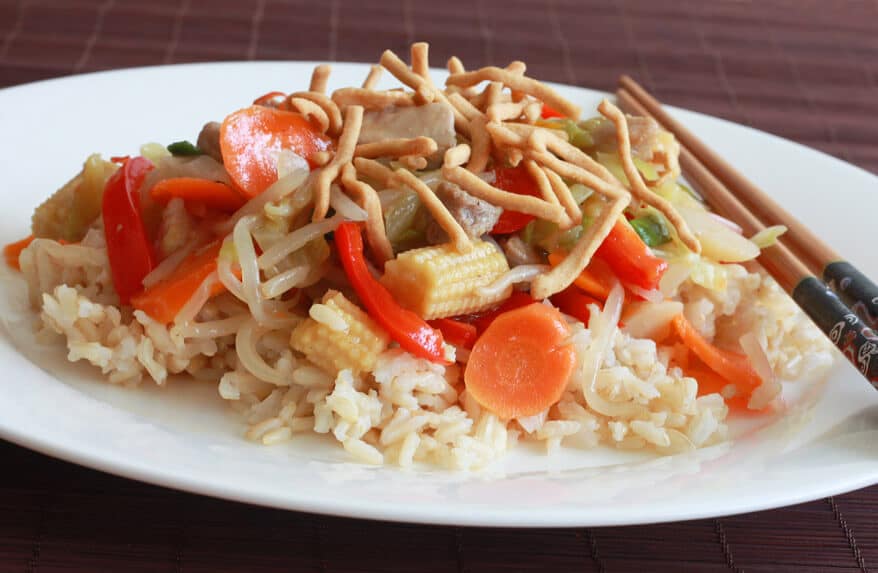 Asian food lovers, don’t forget to check out this recipe for the Best Homemade Teriyaki Sauce!