Boxty are Irish potato pancakes made from a combination of grated and mashed potatoes that are fried until delightfully crispy on the outside and soft on the inside. They’re irresistibly delicious!  This traditional boxty recipe uses simple ingredients, is easy to make, and you’ll absolutely love the results! 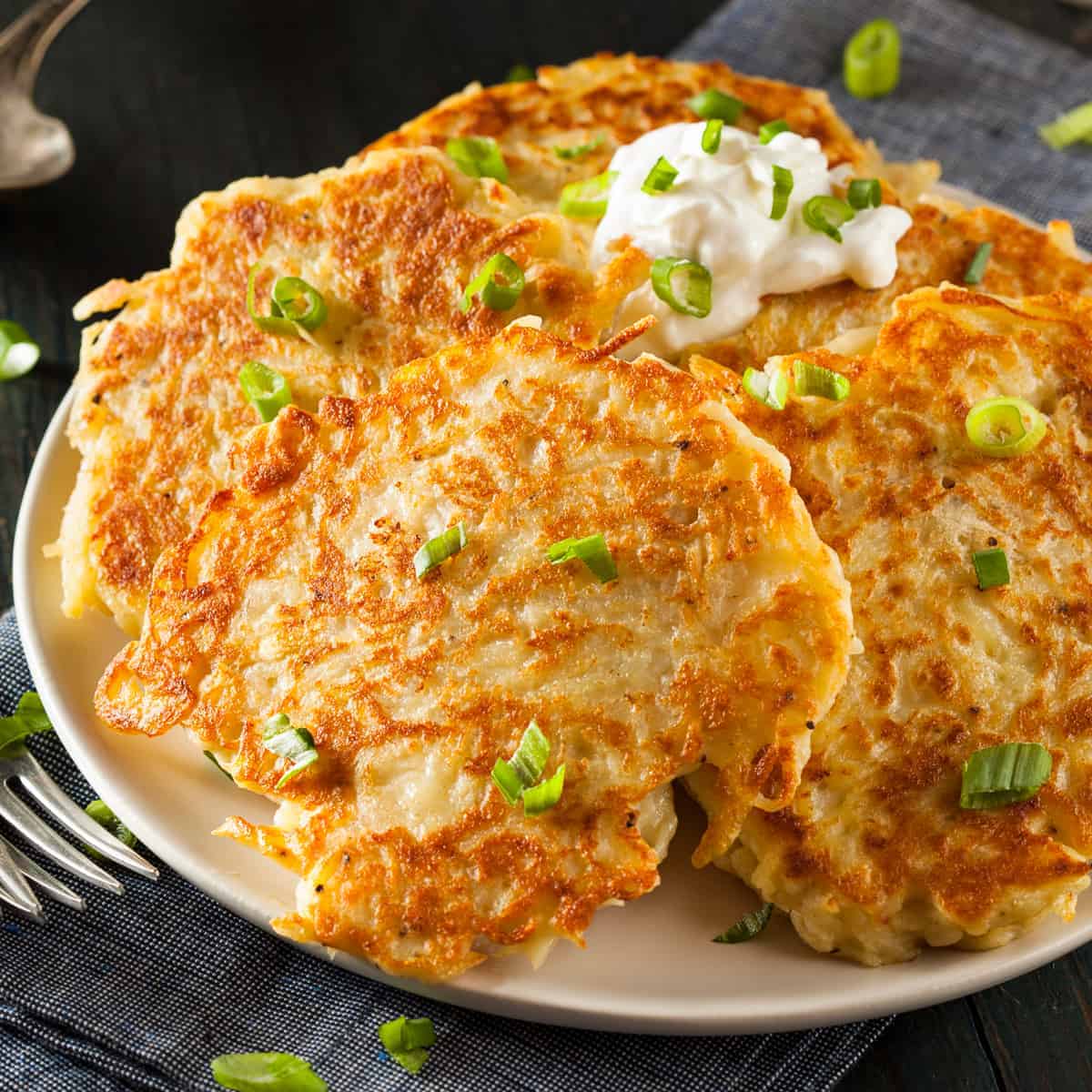 Boxty is a traditional Irish potato pancake and comes from the Irish arán bocht tí which translates as “poorhouse bread,” though it may also come from the word bácús, meaning “bakehouse.”   It’s made with a combination of raw grated potato and cooked mashed potatoes with the end result being something akin to a hash brown pancake.  While it’s most commonly fried in pancake form, boxty has also traditionally been made by baking it in a loaf pan and slicing it and also by making the dough thicker, rolling it into a ball, and gently simmering it like a giant dumpling.

Boxty has been a staple food in Ireland since the 1700’s.  There’s an old Irish rhyme that reflects its cultural significance:

Boxty on the griddle; boxty on the pan. If you can’t make boxty, you’ll never get a man!

The ingredients are simple:  Potato (grated and mashed), flour, baking soda and buttermilk.  The buttermilk contributes both flavor and acts as the acid necessary to activate the baking soda, giving the potato pancakes a little lift.

Researching old recipes for boxty and chatting with friends from Ireland, I’ve found that everyone uses different binding agents for their boxty batter – buttermilk, milk, cream, eggs, butter – each one producing a different texture.  It’s largely a matter of personal preference and you can experiment to determine which one you like best. 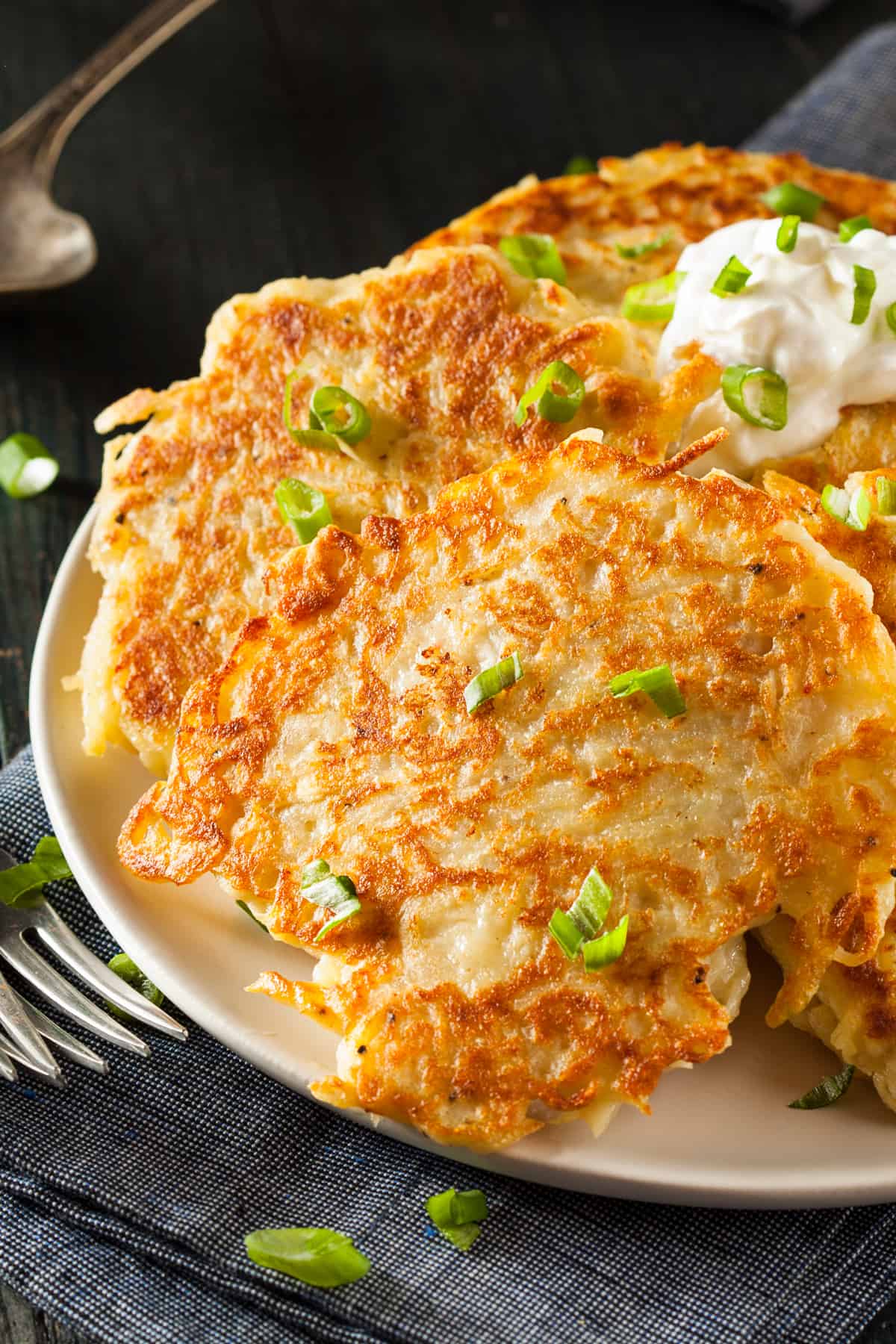 The most important tip for frying boxty is “slower is better than fast.”  Because boxty includes raw grated potato it needs enough time to cook to ensure the interior is done.  If you fry them too fast you’ll end up with a brown and crispy exterior but an undercooked interior.  Fry them over moderate heat to give the interior time to catch up to the exterior.

While you can use oil for frying we highly recommend butter, quality lard, or bacon grease for the best flavor.

How to Serve Boxty

The first key is to serve them straight from the frying pan (or as soon thereafter as possible) so they retain their crispy exterior.  Traditionally they were served with freshly churned butter (a nod to St. Brigid, patron saint of dairy).  They can also be served with crème fraîche and a sprinkling of scallions/green onions, with bacon and eggs, smoked salmon, or with honey for a sweet variation.  Some modern adaptations also include shredded white cheddar and parsley or scallions mixed into the batter.

Can Boxty Be Made in Advance?

Yes they can!  Wrap and store them in the refrigerator and reheat them by frying them in a skillet with more butter.

Boil, drain, and mash the potatoes.  Chill until cold or overnight.

In a small bowl, combine the flour, baking soda and salt.  Set aside. 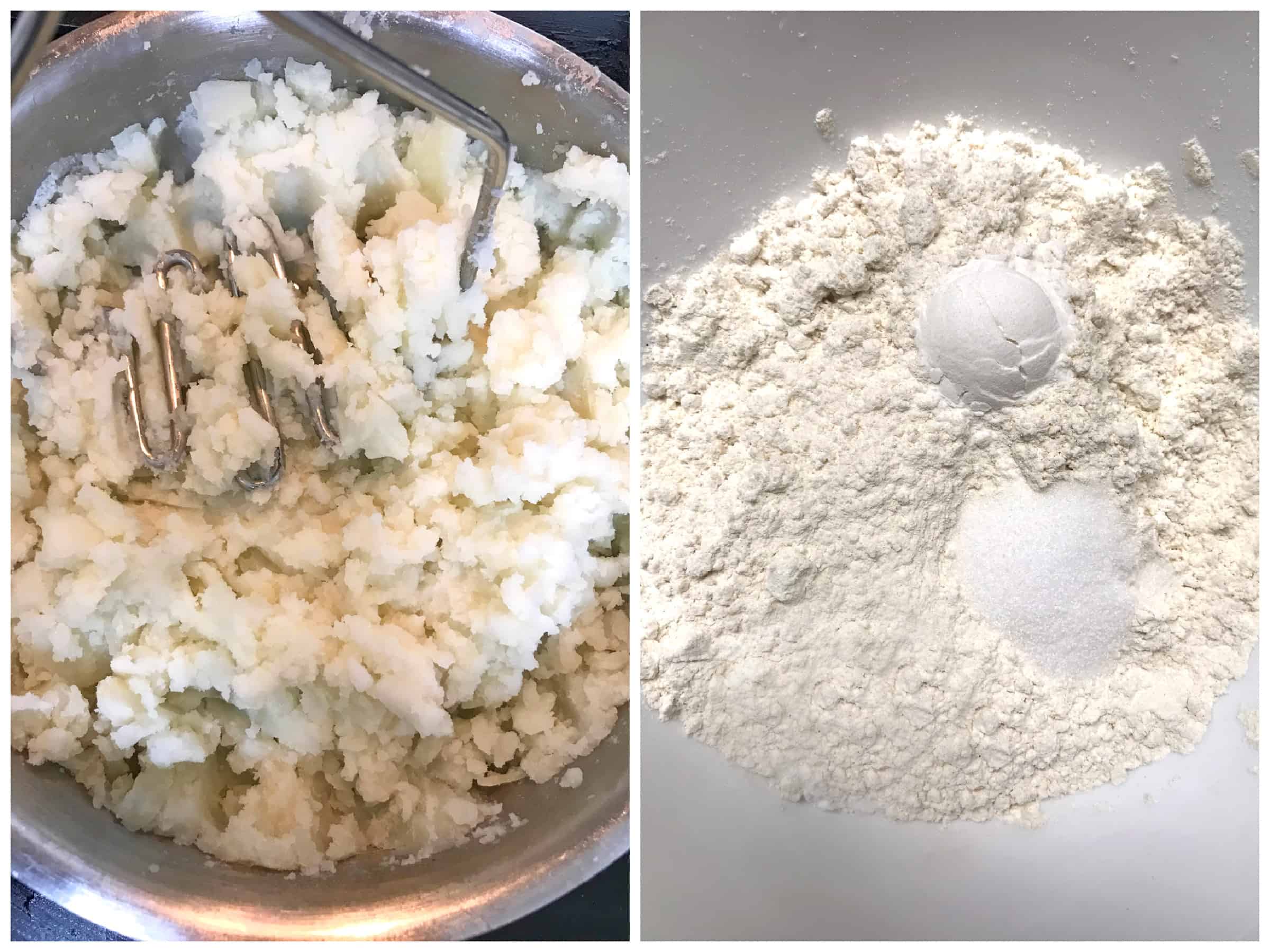 Grate the potatoes, place them on a cotton clean kitchen towel and wring out as much liquid as you can.

Note:  The traditional method involves wringing the potato water into a bowl, waiting about 30 minutes to allow the starch to collect at the bottom of the liquid, pouring off the liquid and saving the starch to mix back into the boxty batter (the starch acts as a binder and helps make the boxty crispier).  Many Irish chefs still do this and others don’t.   You can decide which end result you prefer.  If you skip this step you may need to cut back a little on the buttermilk. 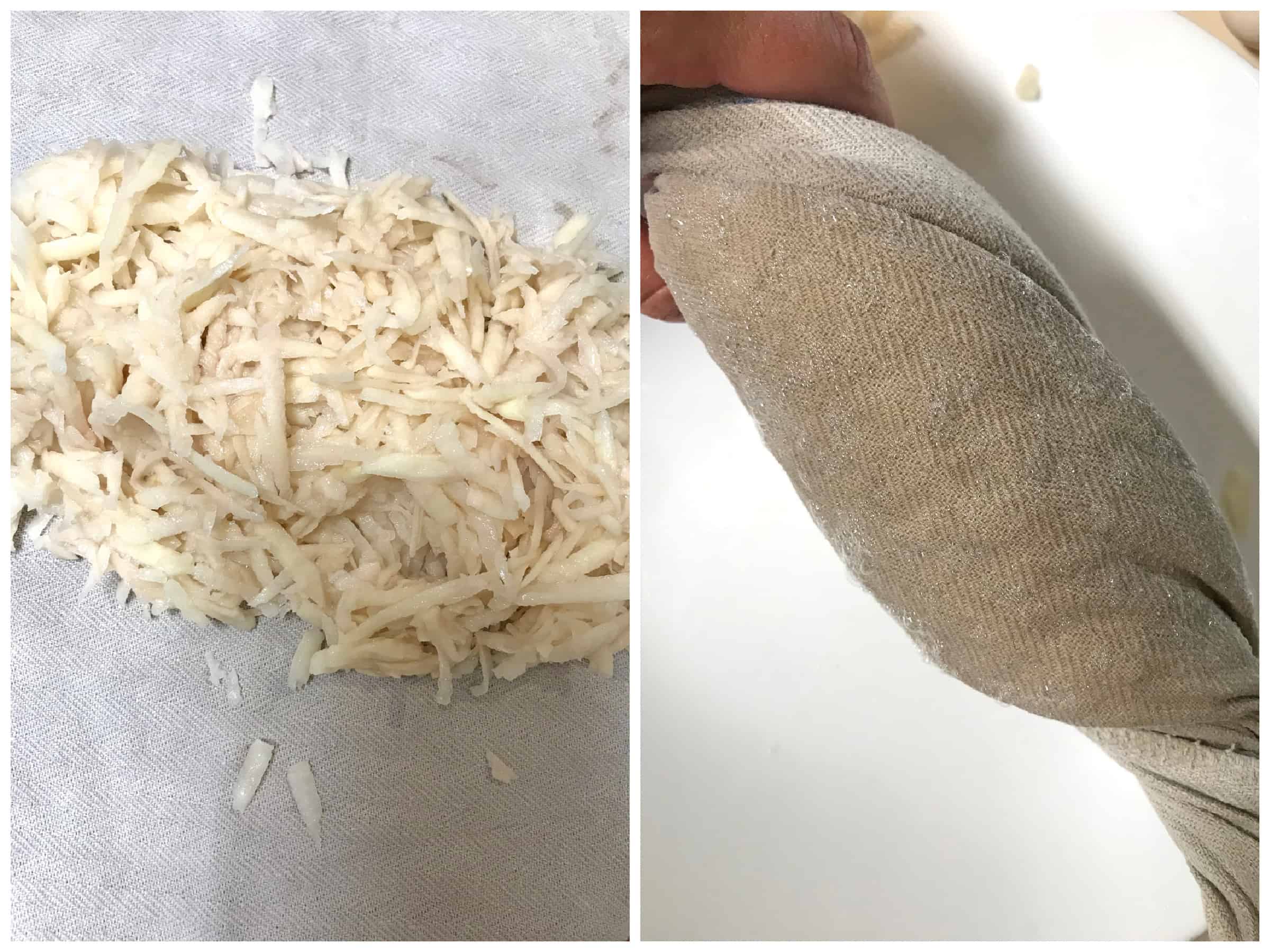 Add 1 1/2 cups buttermilk and combine the mixture.  If the mixture is too thick/dry, add a little extra. 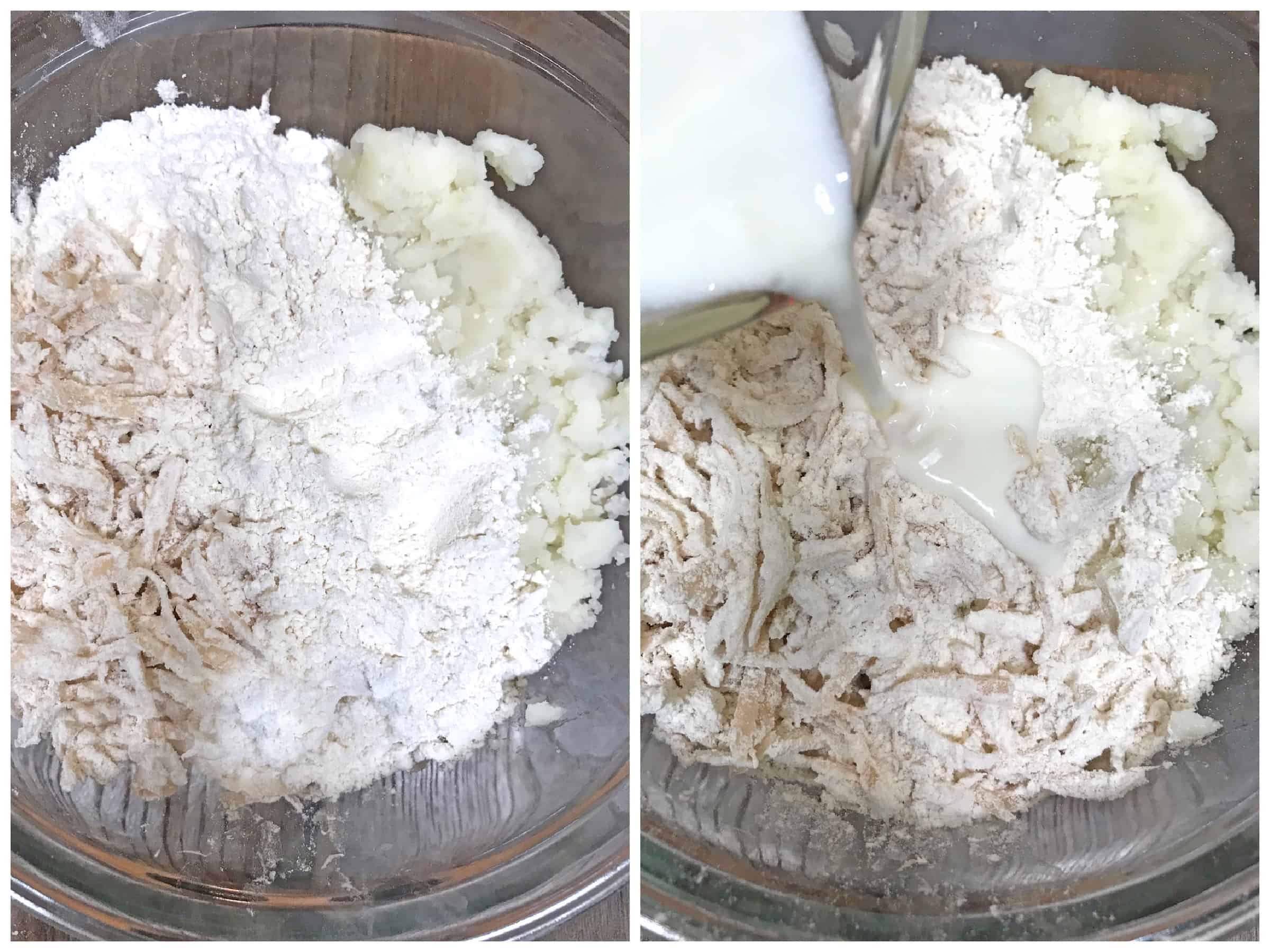 Heat some butter, bacon grease, lard or oil in a heavy pan over medium-high.  Scoop the potato mixture into the pan to form individual patties, pressing down on them to flatten them.

Fry until the bottom is nicely browned and then flip them over and fry the other sides are likewise nicely browned.  Be careful not to cook them too fast or they will become browned before the raw potato is cooked.  Adjust the heat as needed.

Transfer the boxty to a warm oven while you fry the remaining boxty. 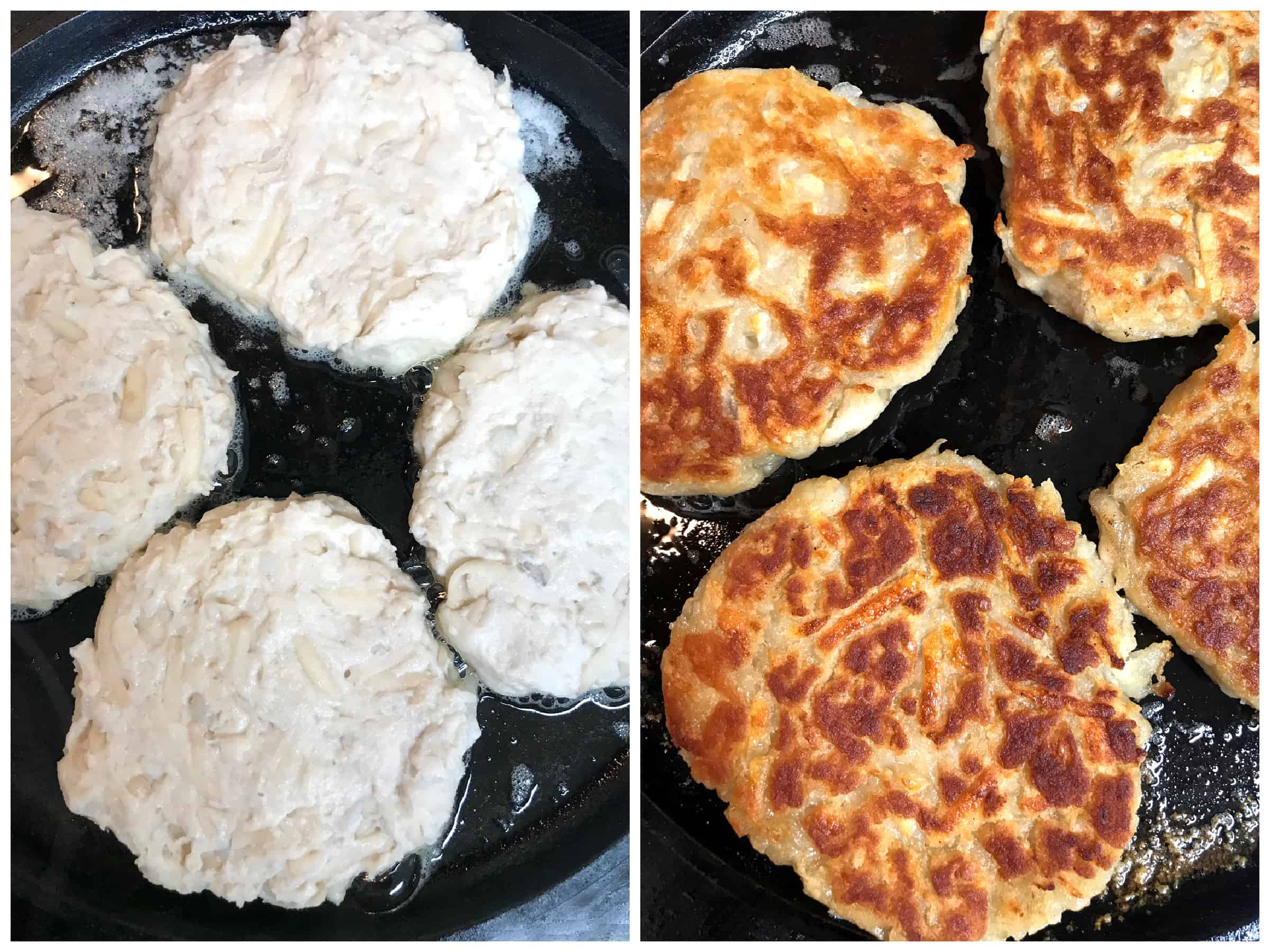 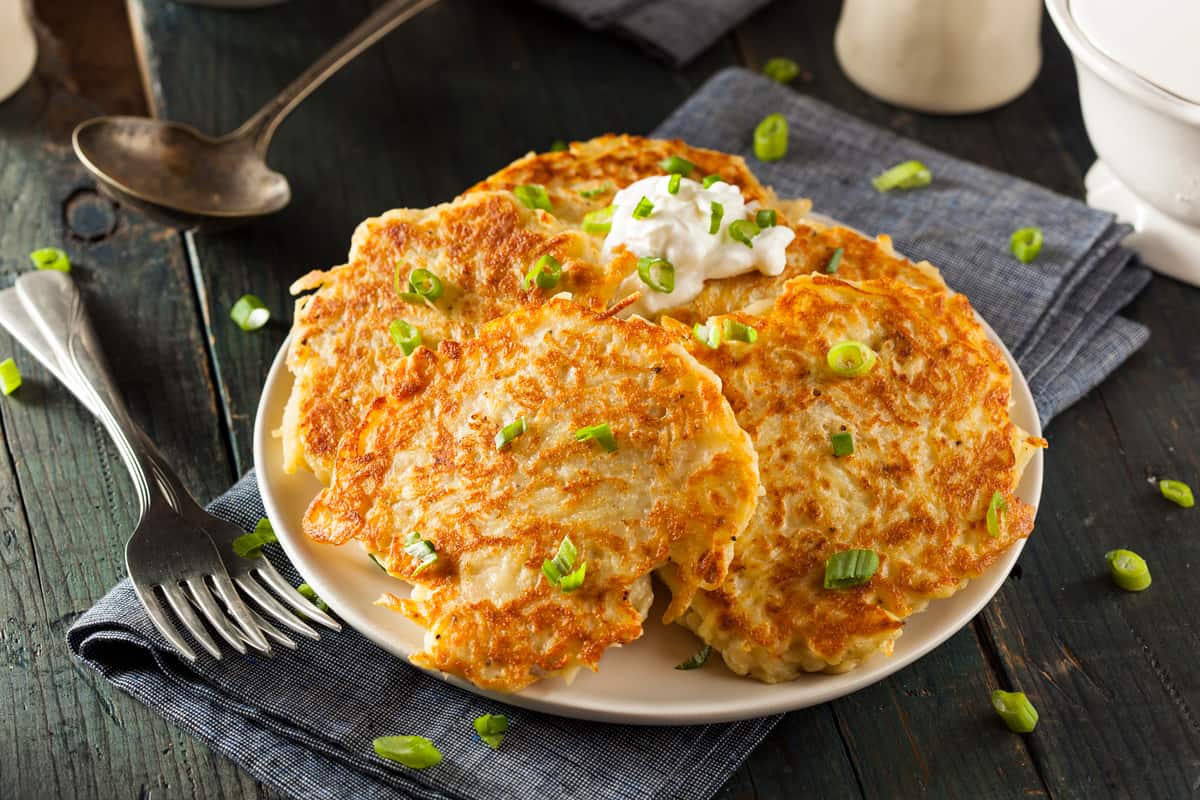 For more delicious Irish recipe be sure to try our: 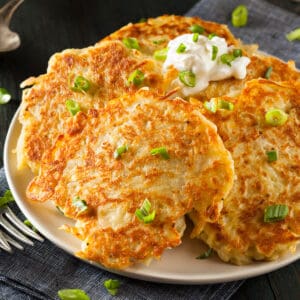 Kimberly Killebrew
A staple Irish dish dating to the 1700's, boxty are potato pancakes made from a combination of grated and mashed potatoes that are fried until delightfully crispy on the outside and soft on the inside.
Print Recipe
5 from 2 votes
Prep Time 15 mins
Cook Time 15 mins
Mashed Potato Chill Time 3 hrs
Total Time 3 hrs 30 mins
Course Breakfast, Dinner, Lunch
Cuisine Irish
Servings 8
Calories 197 kcal

The traditional method involves wringing the potato water from the grated potatoes into a bowl, waiting about 30 minutes to allow the starch to settle at the bottom of the liquid, pouring off the liquid and saving the starch to mix back into the boxty batter (the starch acts as a binder and helps make the boxty crispier).  Many Irish chefs still do this and others don't.   You can decide which end result you prefer.  If you skip this step you may need to cut back a little on the buttermilk.