Nothing speaks comfort like a bowl of hot, homemade chicken noodle soup.  And if you’re looking for the BEST chicken noodle soup recipe, look no further.  Low and slow-simmered chicken, fresh and wholesome vegetables, savory herbs, healing broth…this “ultimate” version bumps up the flavor several notches and is sure to become your go-to for this beloved classic soup! 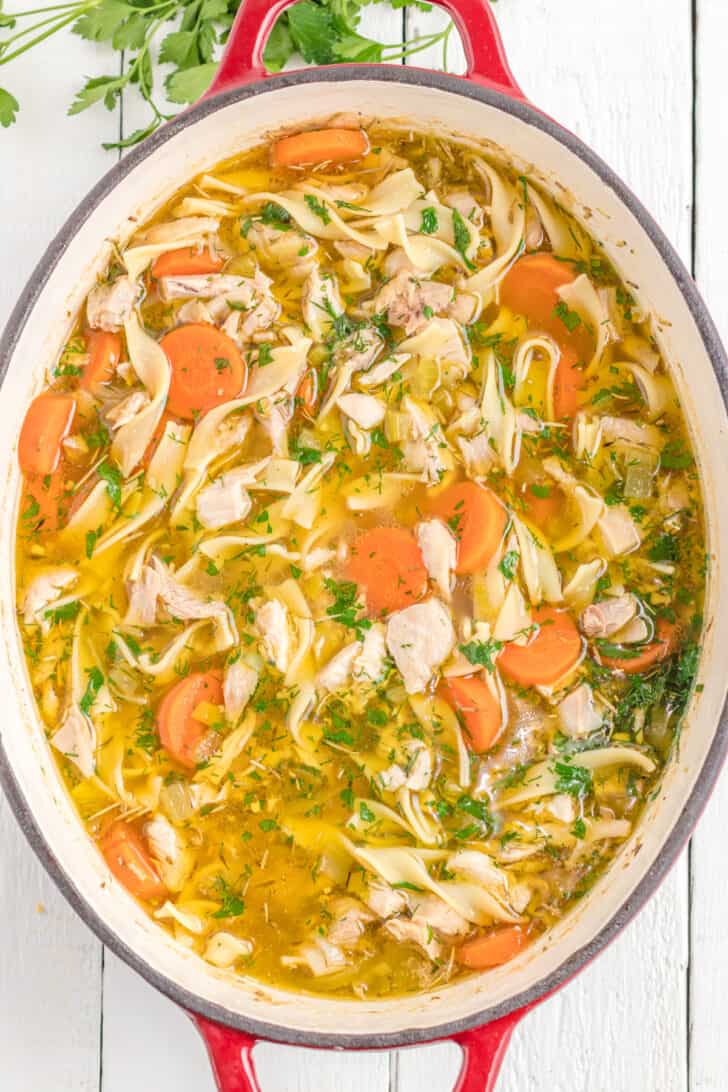 No other soup conjures the same nostalgic charm as chicken noodle soup.  Everything about it speaks peace and calm to the soul. I can be having a rough or stressful day but the moment I sit down to a bowl of hot, homemade chicken noodle soup, a transformation takes place and my mind and soul are restored to a sense of balance and well-being.

This chicken noodle soup recipe incorporates everything that makes this classic so beloved –  fresh chicken, wholesome vegetables, herbs, all slow simmered – in addition to a couple of “extras” that take the flavor and deliciousness to maximum heights.

For the best flavor you’ve got to use bone-in chicken as it imparts the richest flavor as well as mouthfeel.  And for optimal flavor  I also use high quality chicken broth instead of water as the base.  This takes an already delicious soup and raises it to the highest level of flavor excellence.  The addition of dill along with rosemary and thyme contributes incredible flavor as does the squirt of lemon juice at the end.  And whatever you do don’t omit the leek.  It’s magic.  Just follow the recipe and you’ll be in chicken noodle soup heaven! 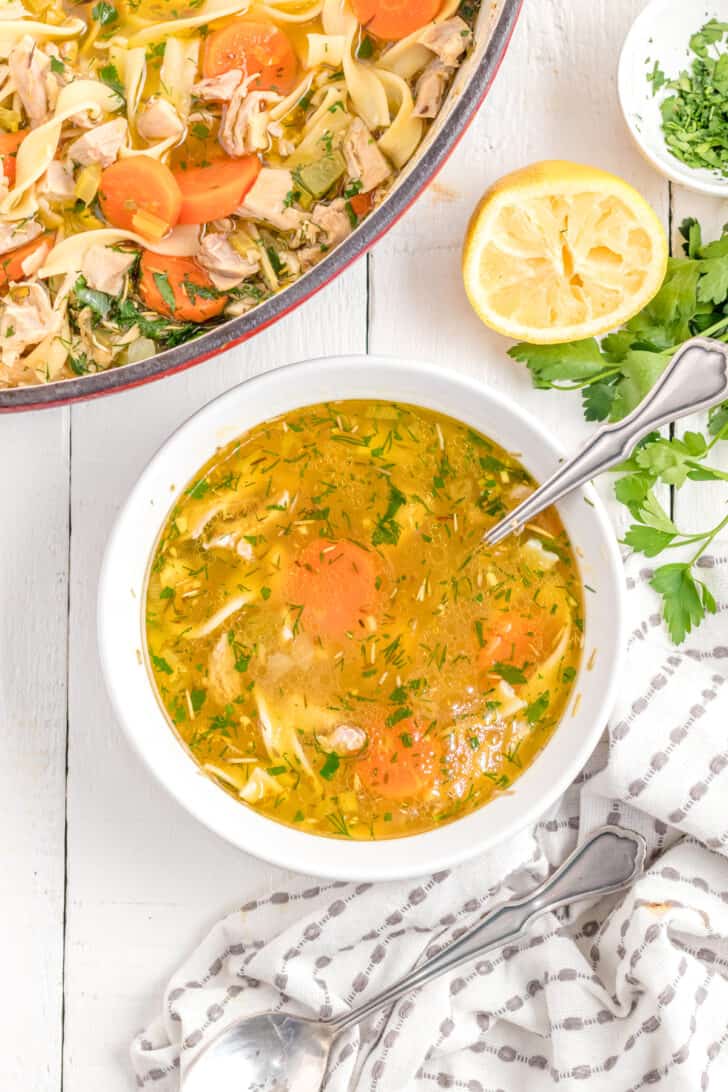 Historians have dated the combination of chicken in broth back to the ancient Greeks whose physicians regularly prescribed chicken soup as a cure-all for a vast number of ailments.   In the 1200’s countries in Asia were pairing noodles with broth, and by the 1700’s noodle soup became popular in Italy and was regularly given to the sick because it was easy to digest and was thought to promote healing.  So when was the pairing of chicken + broth + noodles become complete?  While I’m sure the combination existed prior to the 20th century, it was the 1930’s that put chicken noodle soup on the map.

Specifically, it was the year 1934 that the Campbell’s soup company debuted the very first canned chicken, broth, and noodle combo, setting the stage for what would become a national staple.  At first it was titled “Noodle with Chicken Soup.”  While it enjoyed success, the awkwardness of its name hindered it as evidenced by the fact that just five years later, when a radio host slipped and accidentally referred to it as “chicken noodle soup,” the people eagerly rushed to the grocery stores to try this “new” soup.  Campbell’s quickly changed its name and its popularity soared from that point on.  For better or for worse (and you know which one gets my vote), Campbell’s Chicken Noodle Soup has remained a grocery store staple since it’s origin, being designated among the “top 10 shelf-stable grocery items” of all time. 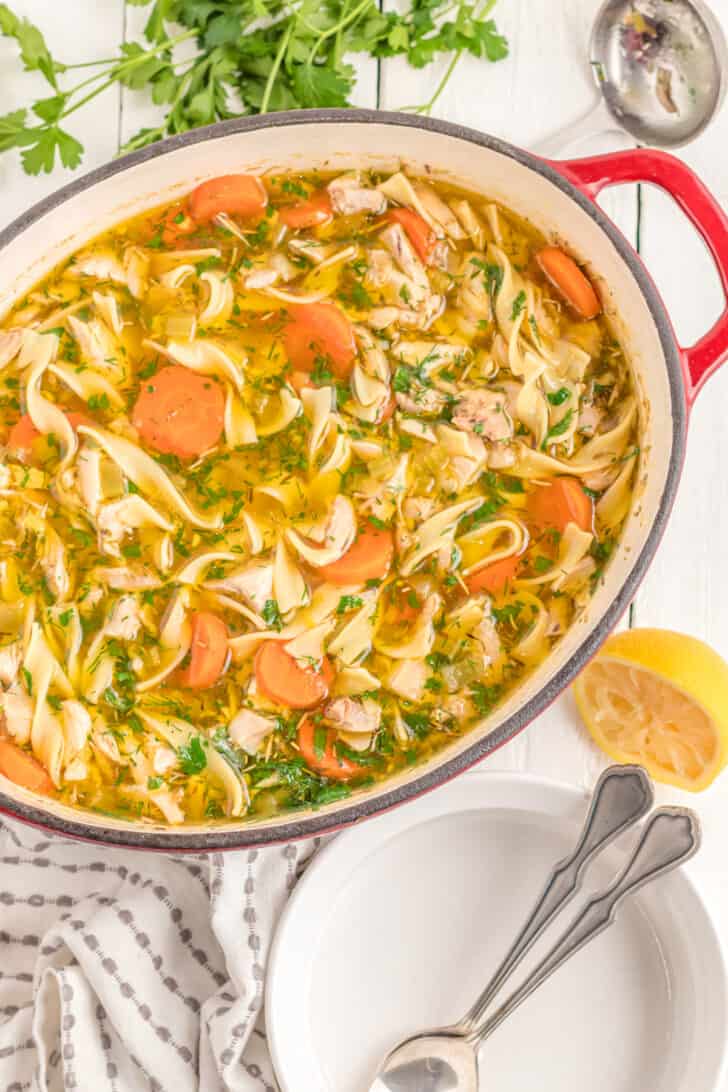 Does Chicken Noodle Soup Really Help With Colds and Flu?

Chicken soup, including chicken noodle soup, has always been believed to possess restorative health qualities.  The earliest reference we know of that describes chicken soup’s healing qualities is from Sephardic Jewish philosopher Maimonides who described it as a treatment for leprosy, asthma, and malnutrition.  While these claims may seem a bit far-fetched today, there has been a lot of anecdotal evidence to suggest that chicken soup helps with colds and flu.

In the 1990’s, a researcher from the University of Nebraska Medical Center, Dr. Stephen Rennard, took it upon himself to research these claims, using his grandmother’s chicken soup recipe as his guide, and his findings confirmed that chicken soup does indeed have healing properties.  Specifically he found that the ingredients in chicken soup have an anti-inflammatory effect on the body:  He found they inhibited the movement of white blood cells which decreased mucous production, reduced inflammation, and boosted the immune system, thereby aiding the body in fighting off infection.  Chicken soup also contains a number of vitamins, minerals, and electrolytes.

In addition the gelatin created by the bones in the chicken has a lot of nutrients that boost liver function and detoxification, help build bone and cartilage, and improve digestion.

So besides being some of the best comfort food out there, chicken noodle soup really is very good for you too! 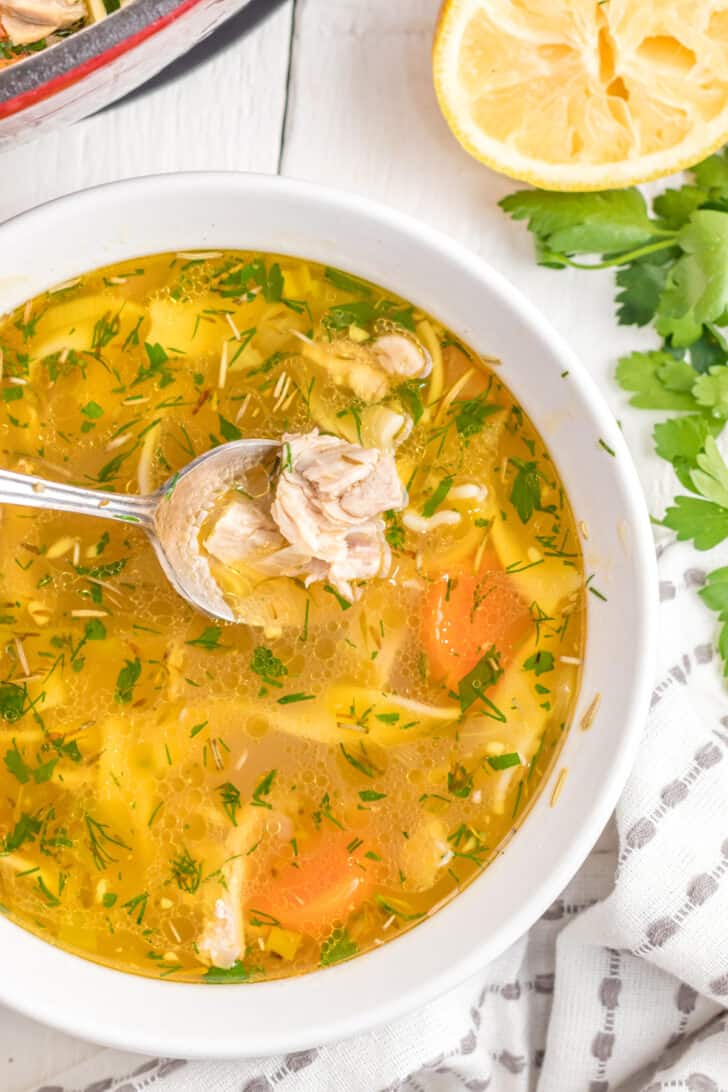 If you don’t have time to make the “ultimate” version that involves a low and slow cooking time, you can make a quick version by using a good quality chicken broth and either using pre-cooked shredded chicken breast or, for more flavor, rotisserie chicken.  It’s not quite as healthy as the “low and slow simmered” version, but nevertheless delicious!

While our chicken noodle soup can be made with just water, for the absolute best flavor we’re doubling up on that chicken flavor by swapping the water out with high quality chicken broth.  Is using chicken broth necessary?  No.  Does it maximize the flavor of the soup?  100% yes.

Gather up the ingredients and let’s get started! 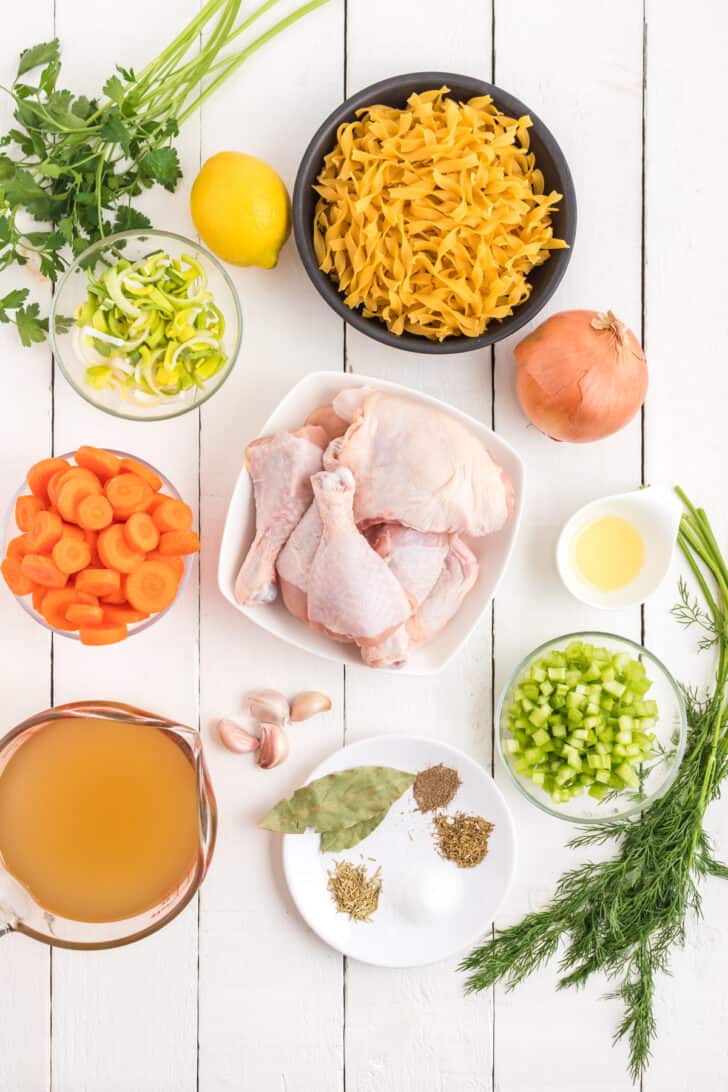 In a Dutch oven or stock pot heat the oil over medium high heat and brown the chicken pieces in batches on all sides until dark golden brown.  Transfer the chicken to a plate and set aside. 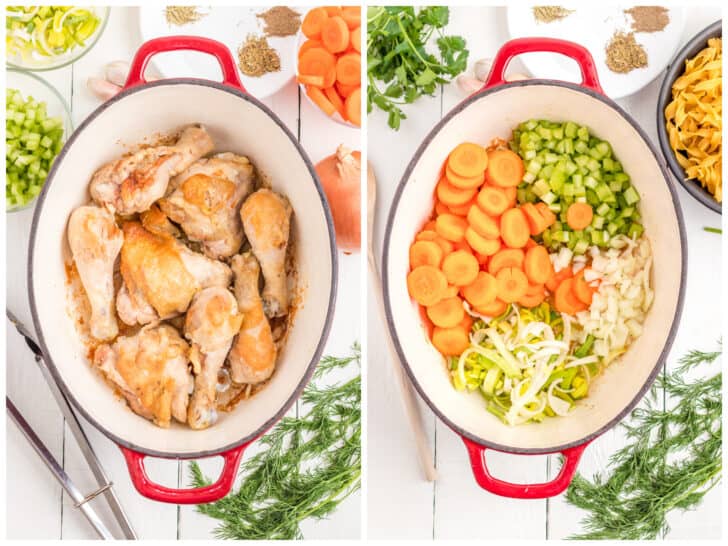 Cook the vegetables until softened, 4-5 minutes.

Add garlic and cook for another minute. 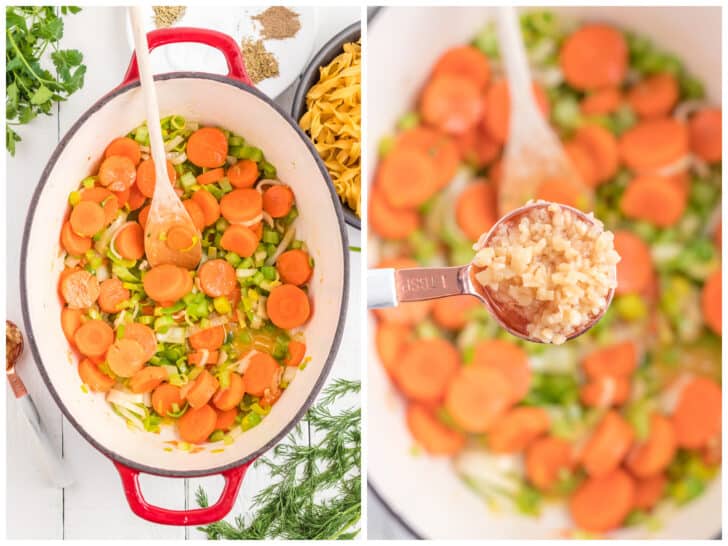 Return the chicken pieces to the pot. 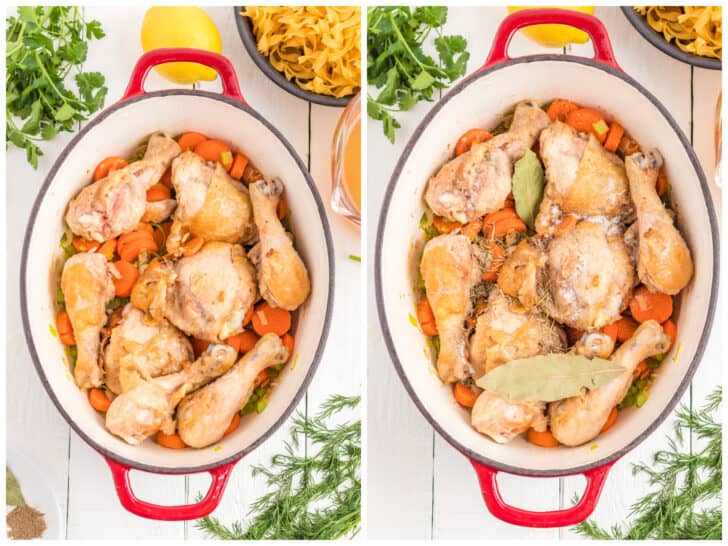 Add the broth.  Again, this is optional but we highly recommend it for the BEST flavor.

If you don’t have extra homemade chicken broth on hand, use a high quality store-bought one.  We love and recommend Aneto, the next best thing to homemade because they make it the same way you do in your own kitchen: Using REAL fresh vegetables, REAL whole chicken – no additives, powders, yeast extracts, flavor enhancers, etc – and simmering it low and slow for the best flavor.  The main difference….their pots are GINORMOUS!   My husband and I toured their factory outside Barcelona, Spain a few years ago and saw the entire process from start to finish.  Fresh vegetables trucked in daily, washed and sorted, and placed in huge cooking pots along with fresh whole chickens,  sea salt, and olive oil.  The room smelled amazing!  At the end of the process we sipped the freshly made broth and then moved on the packaging room where the cooled broth was filled into cartons, slid down a conveyer belt for quality control, and packed up in boxes for shipping.  The whole process was truly an inspiration.

Aneto products are available in stores across the United States and on Amazon.  Click here for a store locator. 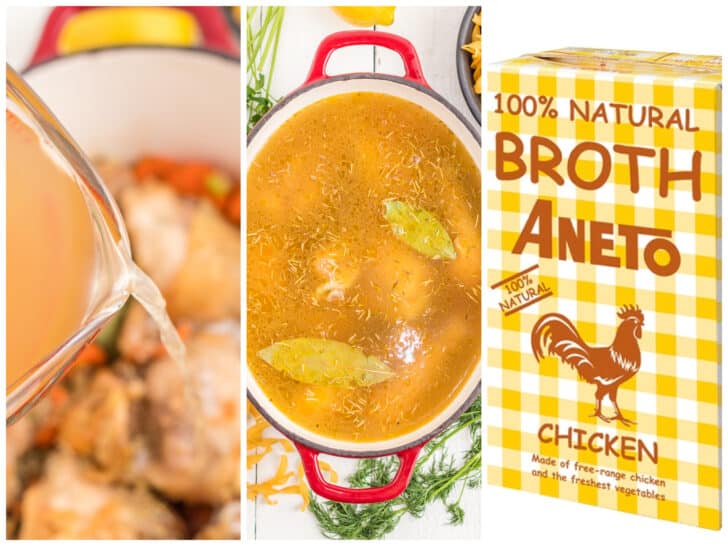 After you add the broth bring the soup to a boil and scrape off any browned bits on the bottom of the pot.   Reduce the heat to low, cover, and simmer for 50-60 minutes. 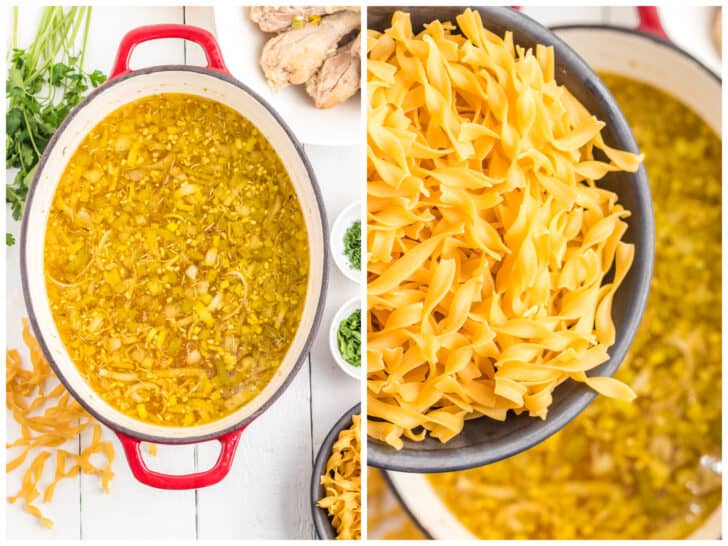 Cook for 8-10 minutes or until done.  Discard the bay leaves.

Return the diced chicken to the pot. 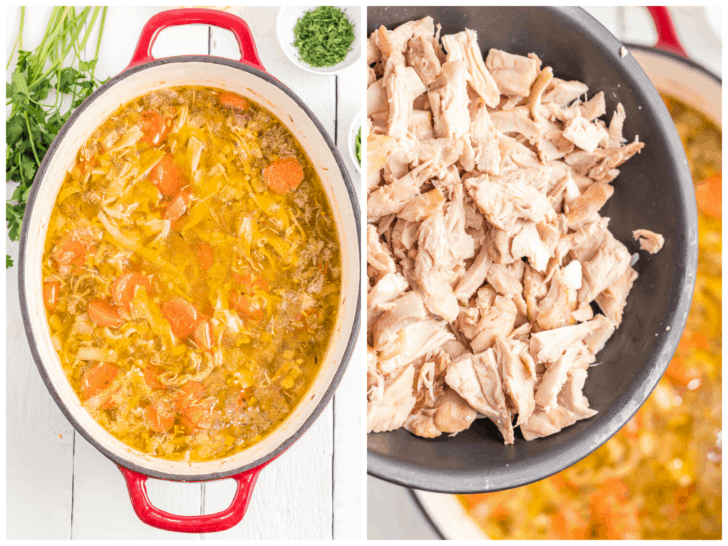 Stir in the lemon juice and parsley and heat through.

Add salt and pepper to taste. 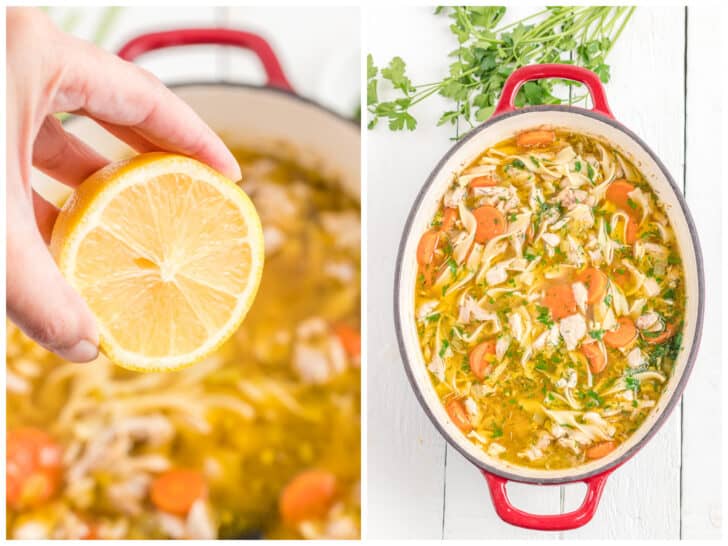 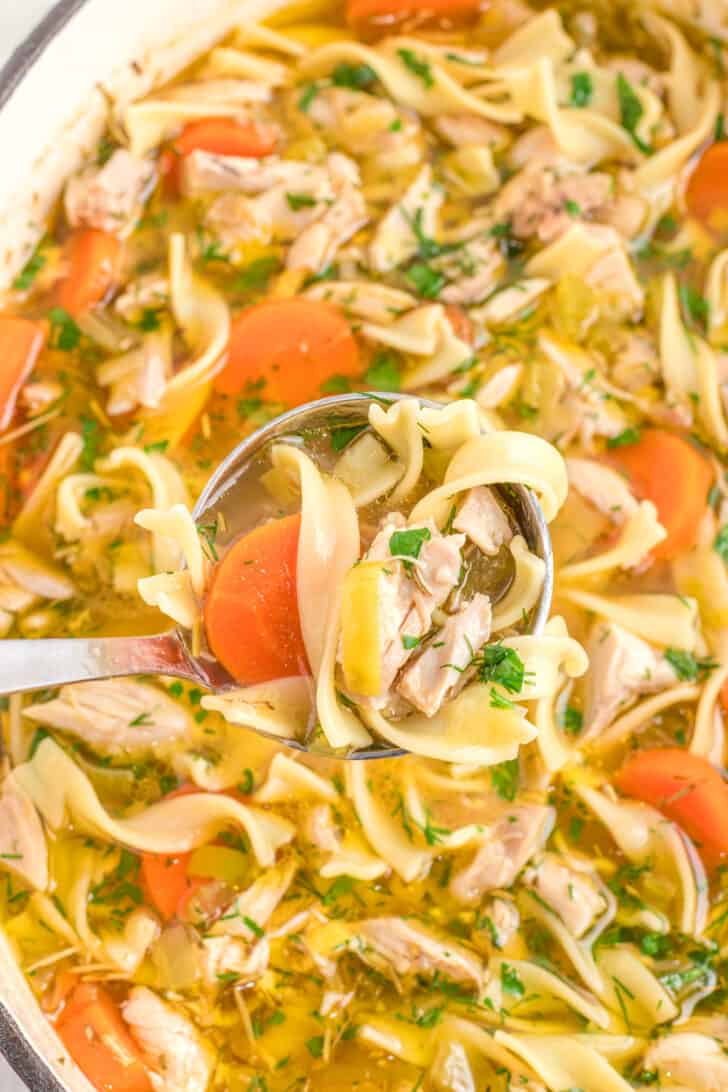 For more delicious soups be sure to try our: 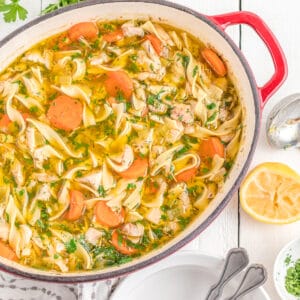