As an Amazon Associate I earn from qualifying purchases.
84shares
Jump to Recipe Print Recipe

The famous torn pancakes originating in Austria and enjoyed throughout Bavaria, this traditional Kaiserschmarrn recipe features pillowy soft torn pieces of pancakes studded with rum-soaked raisins (optional) and served with powdered sugar and your choice of fruit preserves, berry jam or applesauce! 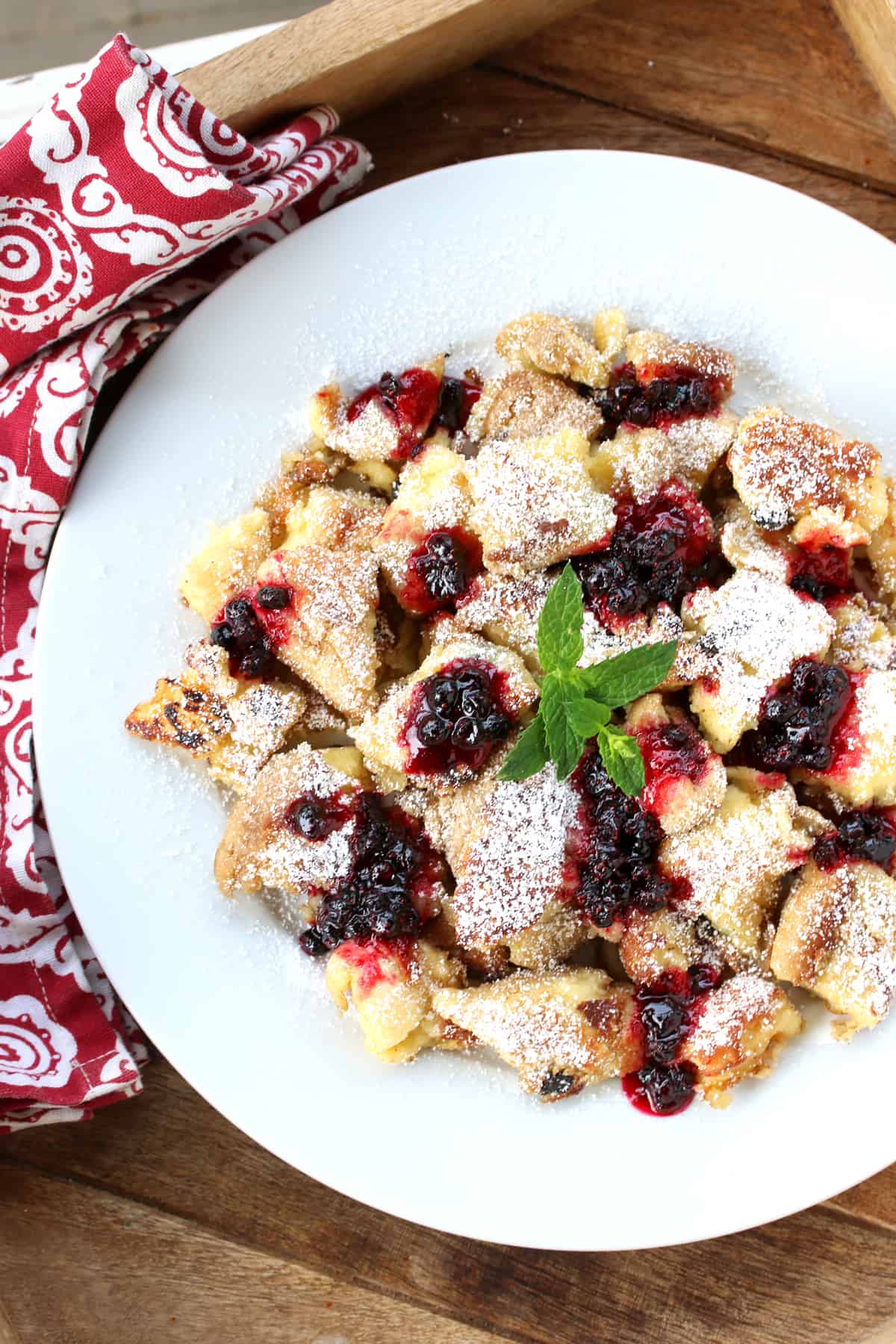 Here is a special treat my mom used to make for us growing up in Germany.  It’s also served at the annual Oktoberfest in Munich where the huge fairytale castle-like tent called Café Kaiserschmarrn is set up and seats 400 people eagerly awaiting the famous confection.  Enjoyed throughout Austria and Bavaria as both a dessert or lunch, Kaiserschmarrn is quick to make and a thorough delight to eat!

Kaiserschmarrn is a sweet dish of torn pancakes studded with rum-soaked raisins and served with fruit preserves or compote (traditionally plum compote, or Zwetschgenröster), berry jam, or applesauce.  The name comes from the German words Kaiser, meaning Emperor, and Schmarrn, which is a colloquial term that means messy, nonsense, or scrambled.  Hence these scrambled pancakes are also known as Emperor’s Mess. 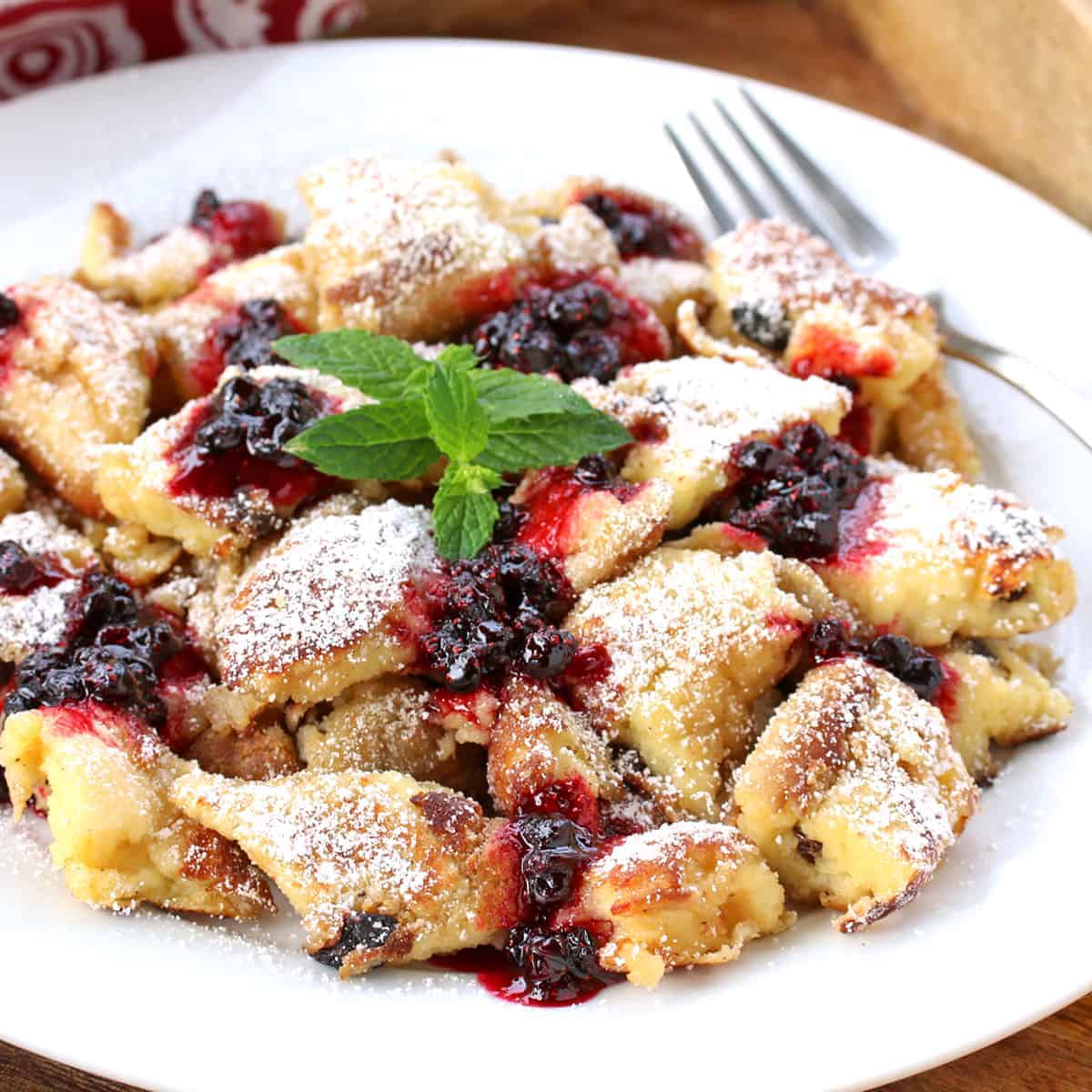 While no one knows for sure exactly how the dish came about, most food historians believe it originated with Emperor Francis Joseph I of Austria and his wife Elisabeth of Bavaria.  Thus Austrians and Bavarians both rightfully claim Kaiserschmarrn as their own.

For any old German movie fans out there, the classic 1950’s movie Sissi, starring Romy Schneider, portrays their marriage.  I grew up in Germany watching that movie with my mom.  I hadn’t seen it in over 20 years and my husband bought it for me a couple of years ago.  You can find Sissi on Amazon.  Grab a plate of Kaiserschmarrn and sit down to the 10 hour-long epic film! 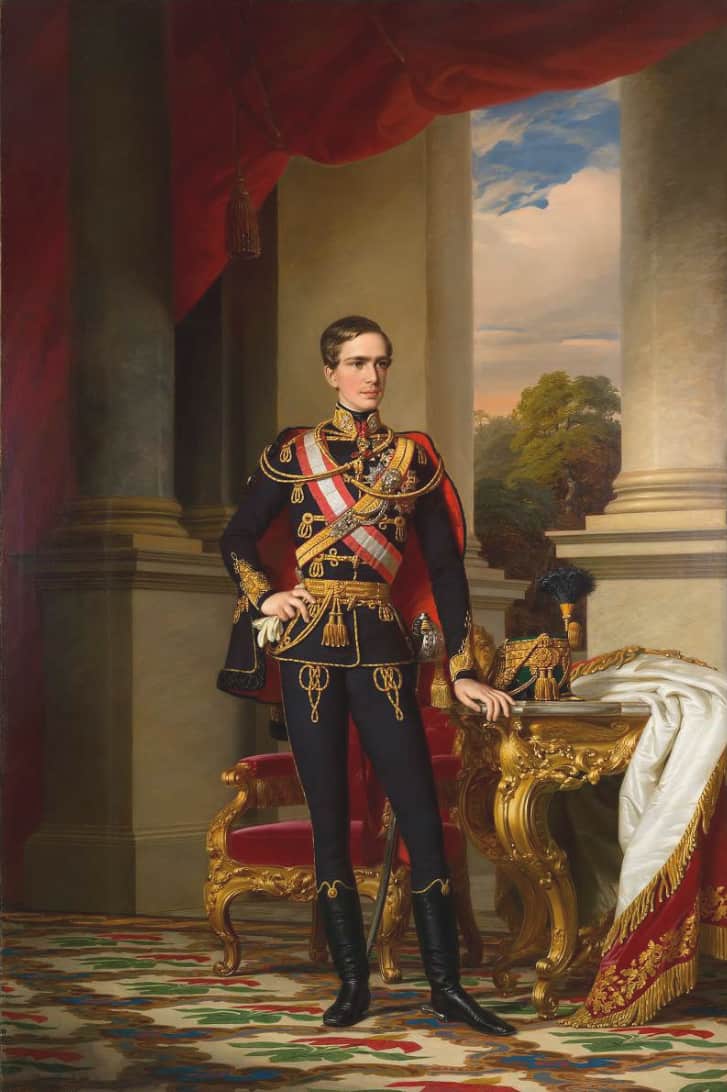 There are three legends attributing the origin of Kaiserschmarrn to Kaiser Franz Josef and Elizabeth (from Wikipedia).

Story one:  “Obsessed with maintaining a minimal waistline, the Empress Elisabeth directed the royal chef to prepare only light desserts for her, much to the consternation and annoyance of her notoriously austere husband. Upon being presented with the chef’s confection, she found it too rich and refused to eat it. The exasperated Francis Joseph quipped, “Now let me see what ‘Schmarren’ our chef has cooked up.” It apparently met his approval as he finished his and even his wife’s serving.”

Story two:  “Francis Joseph and his wife were traveling the Alps and stopped by a farmer’s home for lunch. The farmer was so nervous that he threw all the fanciest ingredients he had into a pan to make a delicious pancake; worse yet, due to his nervousness and shaky hands he scrambled the pancake. Hoping to cover up the mess he then covered it with plum jam. Luckily, the Kaiser thought it was scrumptious.”

Story three:  “His wife was a poor cook and couldn’t flip a pancake efficiently. She decided to play to her strengths and shred the pancakes altogether and would serve them up to the Kaiser on a regular basis with jam. He liked them with jam. It was his favourite dessert.”

Which story is the correct one?  We’ll probably never know.  Just pick your favorite and sit down to a plate of this delicious Kaiserschmarrn!

How to Serve Kaiserschmarrn

Kaiserschmarrn is a traditional dessert but it is also commonly eaten for brunch or lunch as a main course.

Serve with a dusting of powdered sugar accompanied by fruit preserves or compote (plum compote, called  Zwetschgenröster, is traditional), berry jam, or applesauce.  You can also add a dollop of whipped cream if you like. 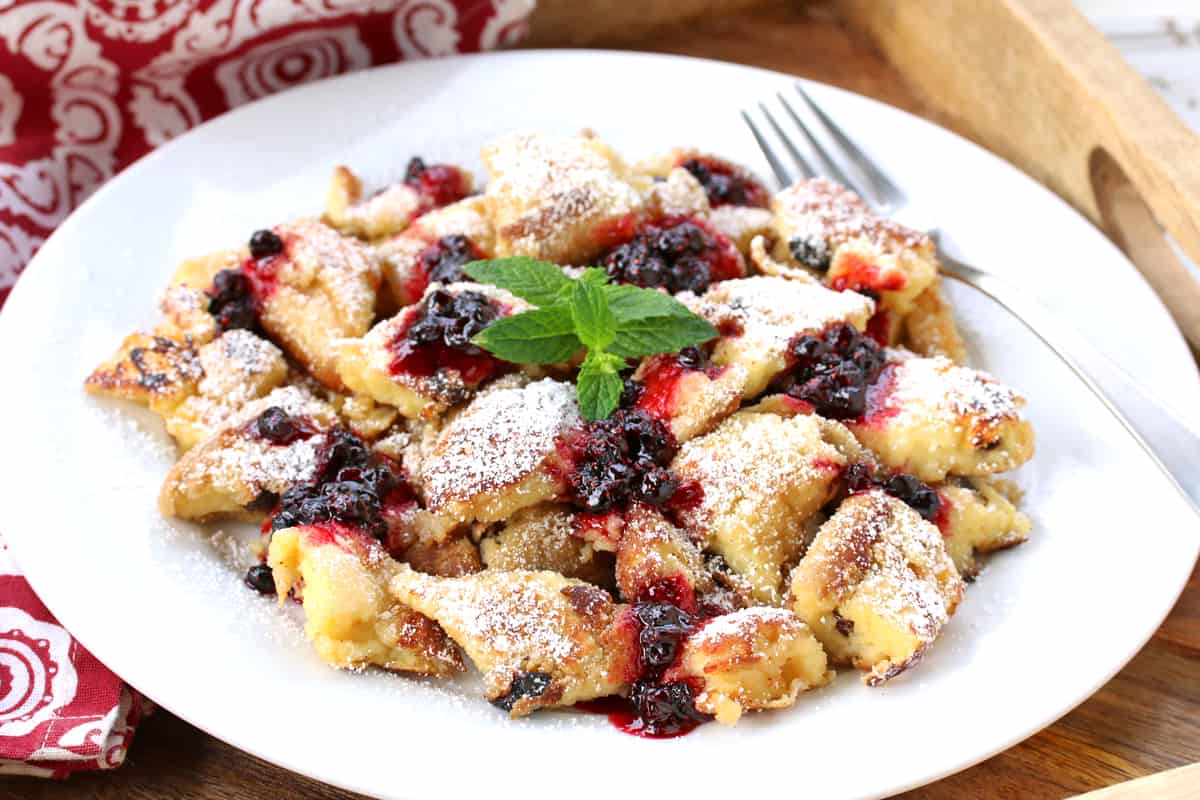 These German / Austrian pancakes are quick and easy to make.  For the best, fluffiest texture just be sure to follow the directions to beat the egg whites stiff before carefully folding them into the batter.

Place the raisins and rum in a small bowl and let soak for at least 2 hours.  If you prefer not to use rum simply soak the raisins in water to soften them up.

In a small bowl stir together the flour and salt. Set aside.

In a large bowl beat together the sugar, egg yolks, and vanilla extract until pale and smooth. 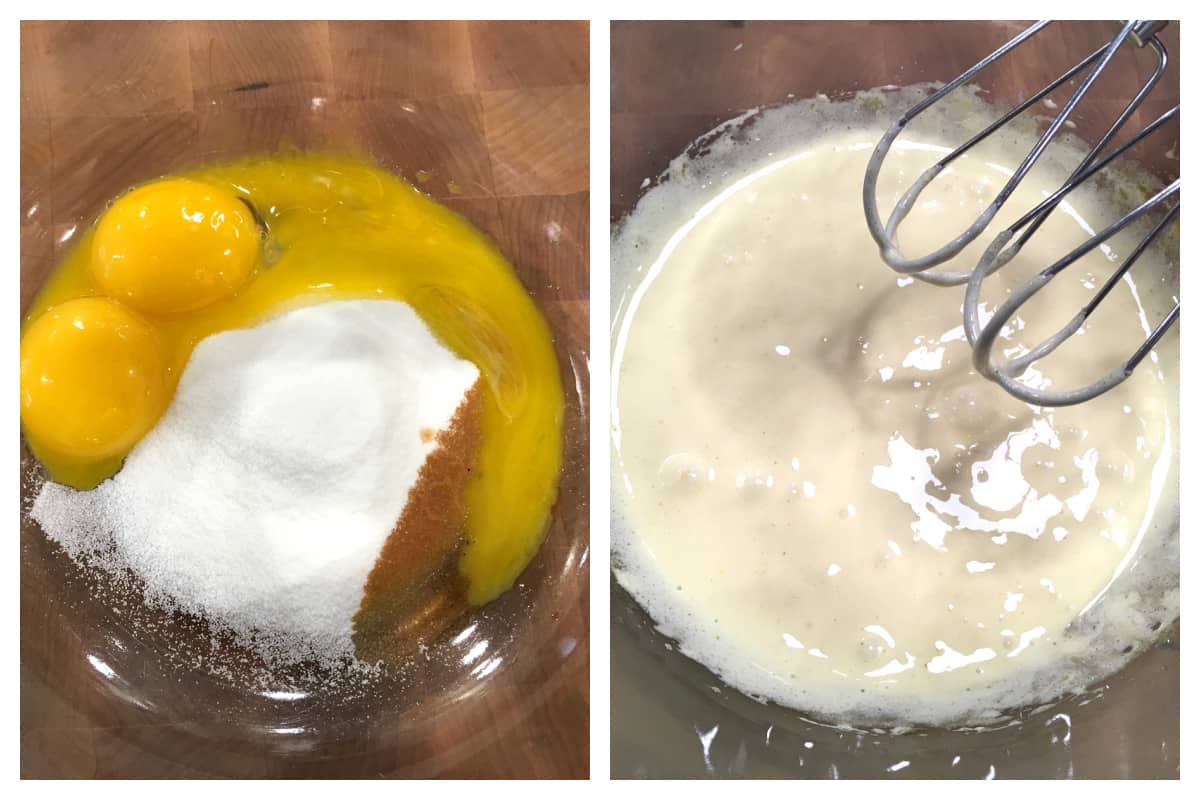 Add the milk and beat until combined.

Add the flour and beat until smooth. 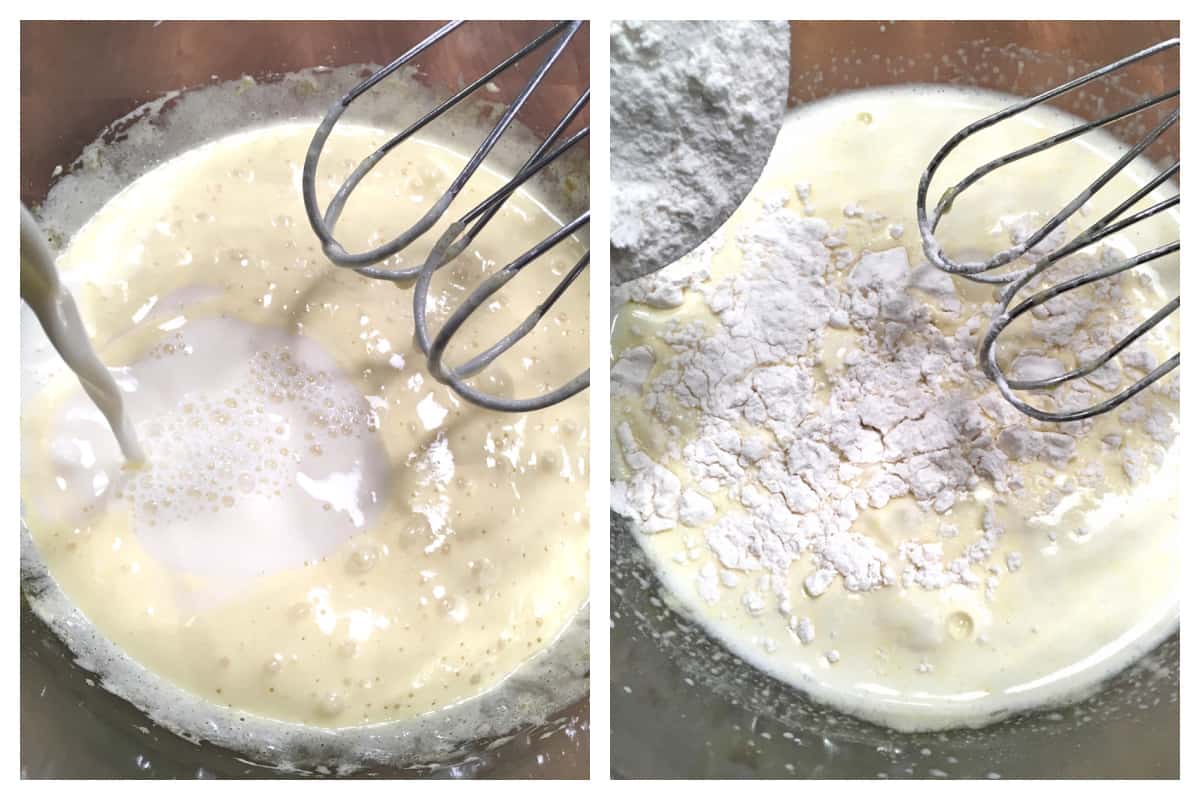 In a separate bowl, beat the egg whites until stiff peaks form.

Carefully fold the egg whites into the batter just until incorporated and white streaks remain. 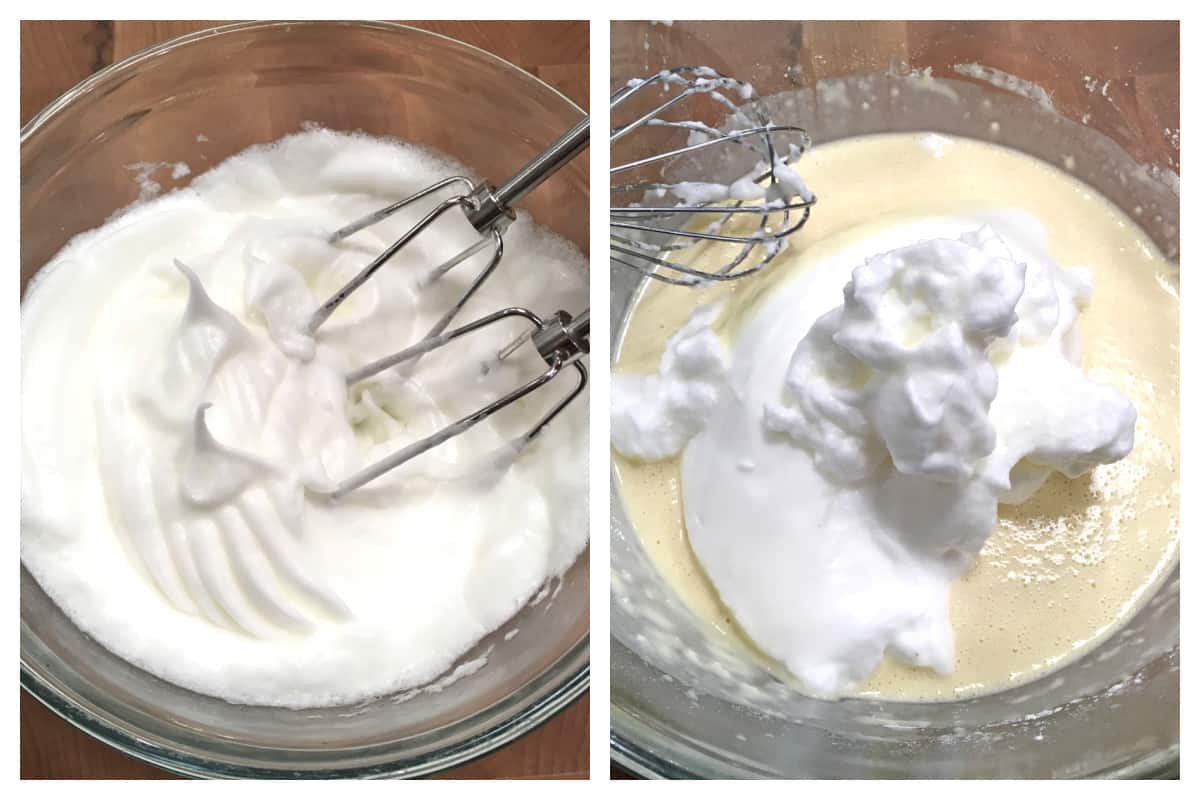 Heat 2 tablespoons of the butter over medium heat in a 12-inch non-stick pan.

Pour the batter into the warm pan. 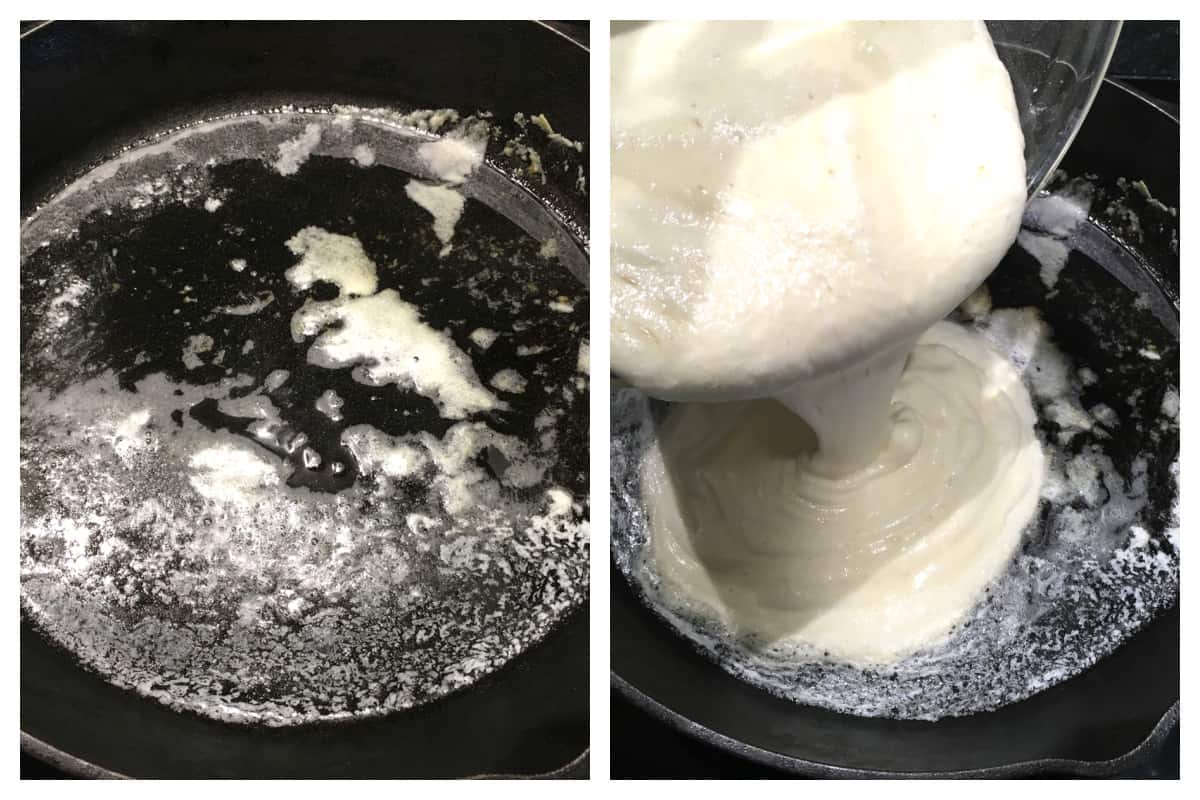 Let the batter cook for a minute or two and then add the raisins, placing them evenly over the pancake. 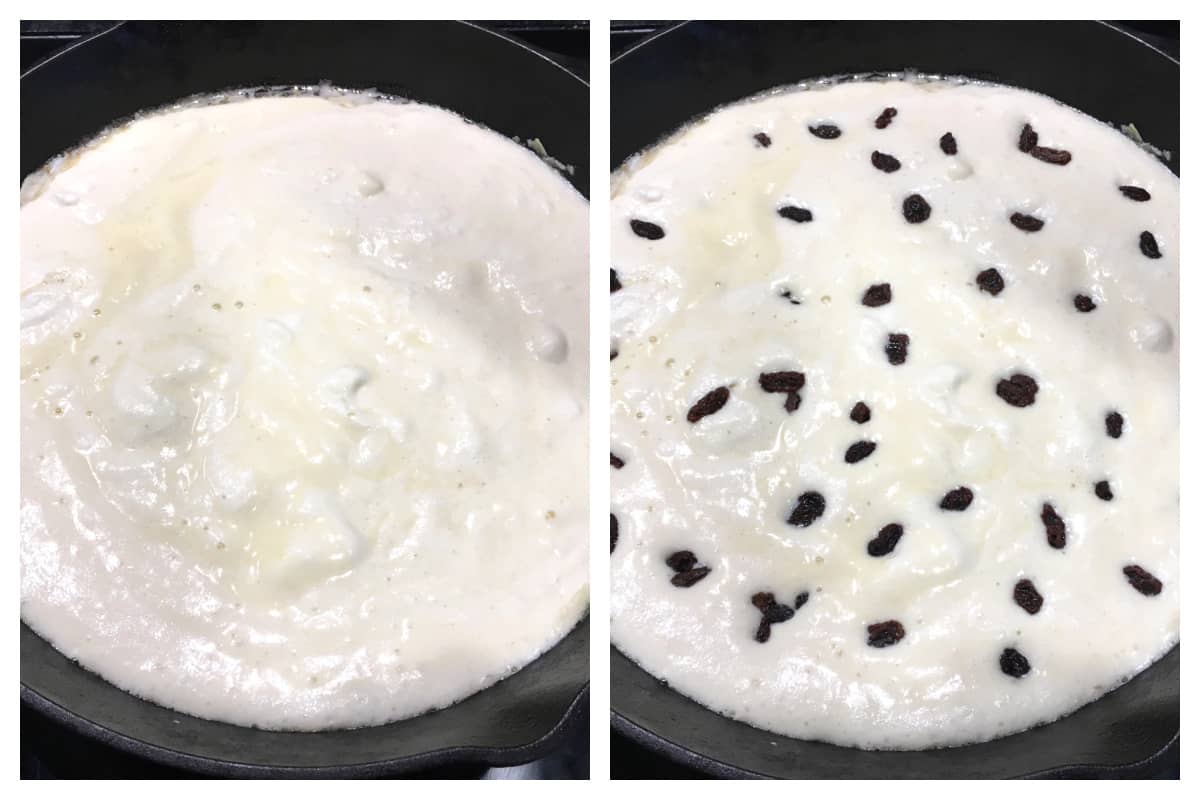 Cover the skillet with the lid and let it cook for for 7-8 minutes or until the bottom of the pancake is light brown (gently lift it up with a spatula to check).  The mixture may form a large bubble or two and that’s totally okay because you’re going to flip it. 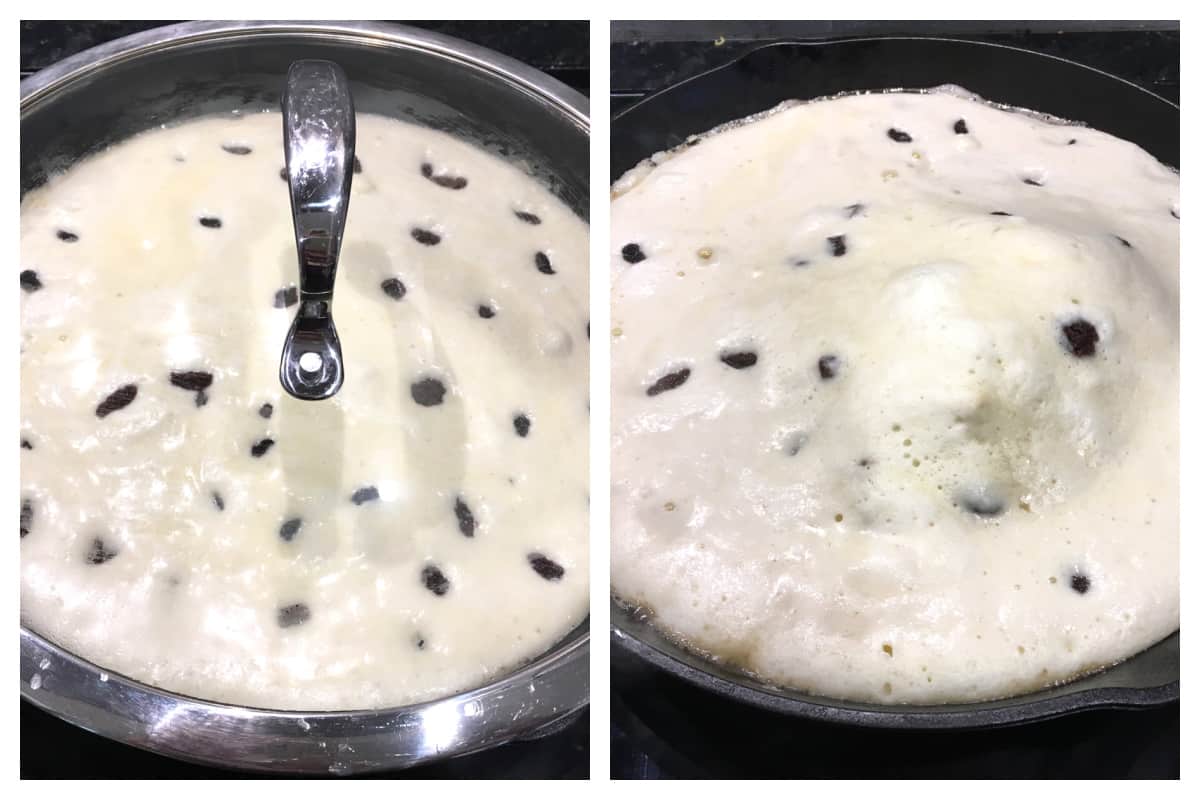 Carefully flip the pancake over.  If it falls apart that’s okay because we’re going to shred it anyway.  Some like to cut the pancake into quarters first and then flip each piece.  Do whatever works for you.  Continue to cook until the other side is likewise light brown. Then use a knife, spatula, or two forks to cut/tear the pancake into bite-sized pieces.

Use a knife, spatula, or two forks to cut/tear the pancake into bite-sized pieces. 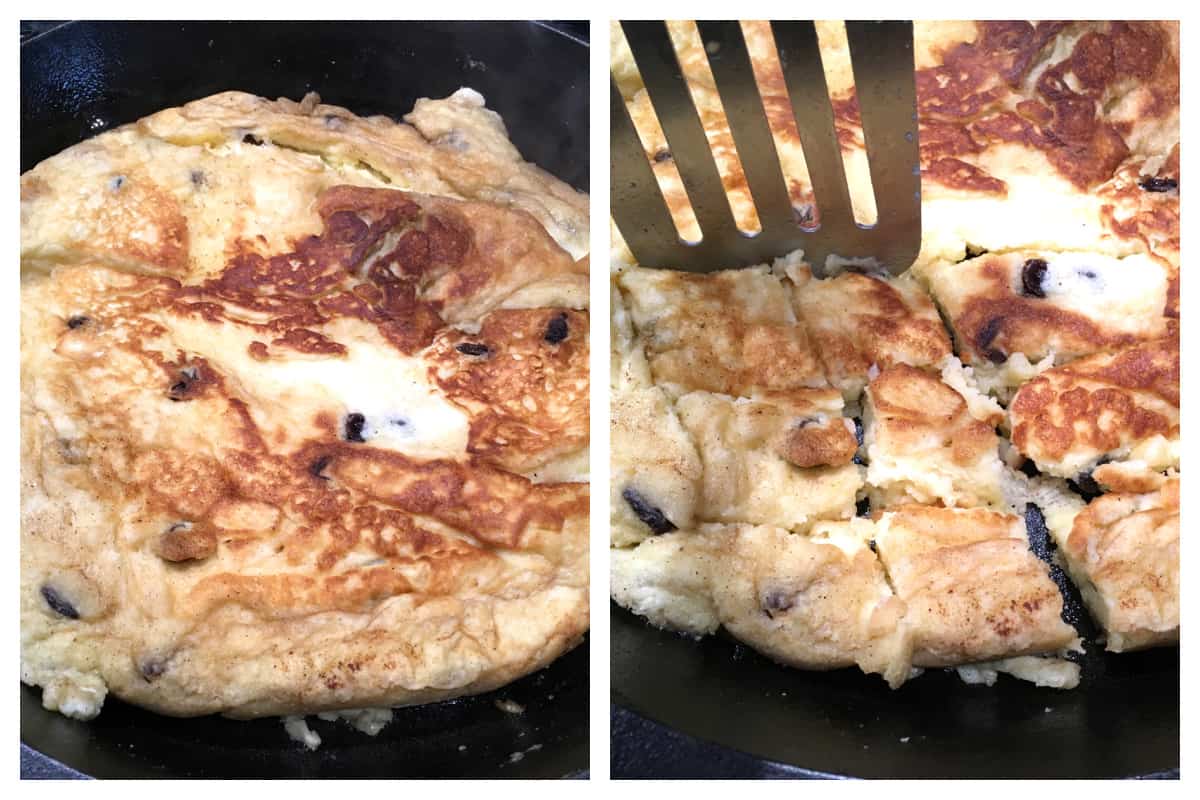 Add and melt the remaining tablespoon of butter and sprinkle the torn pieces with the granulated sugar, carefully tossing them in the pan to coat them and allow the sugar to melt.

You can serve the Kaiserchmarrn directly from the skillet dusted with powdered sugar or transfer to a plate and serve. 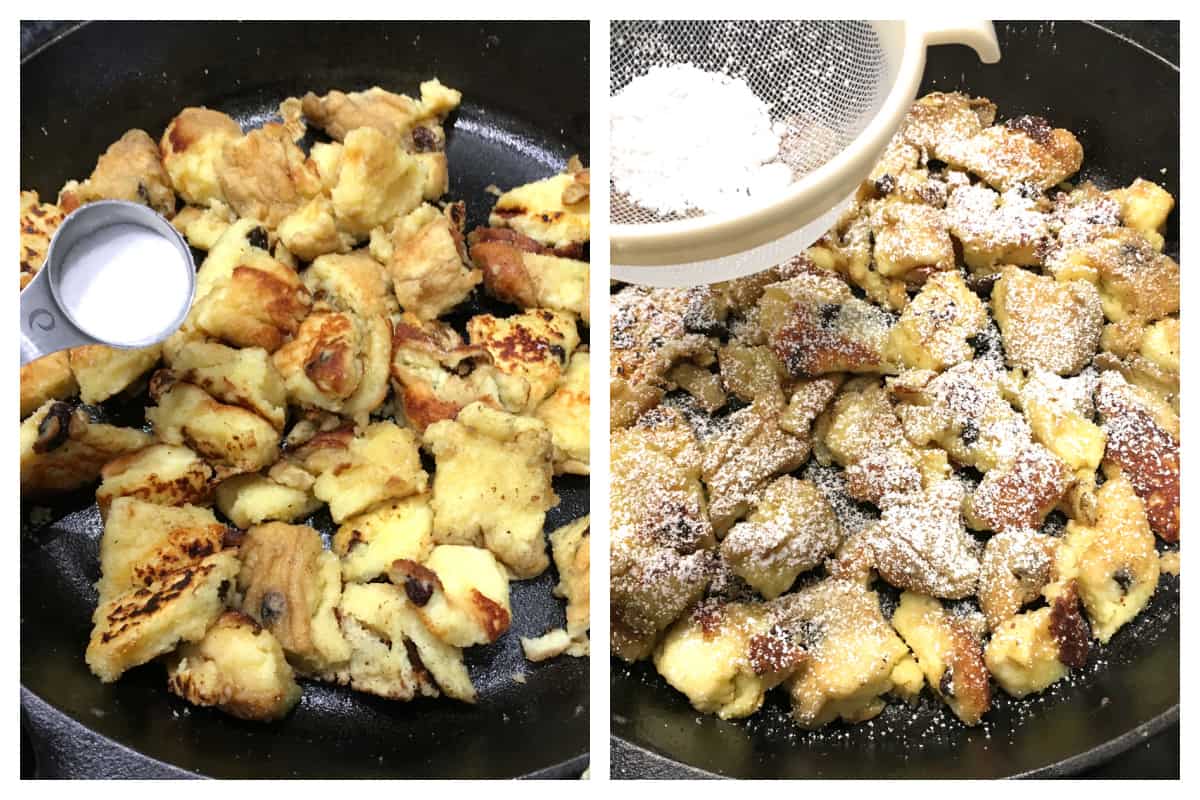 Sprinkle with powdered sugar and serve with berry jam, applesauce, or fruit compote.  If desired add a dollop of whipped cream. 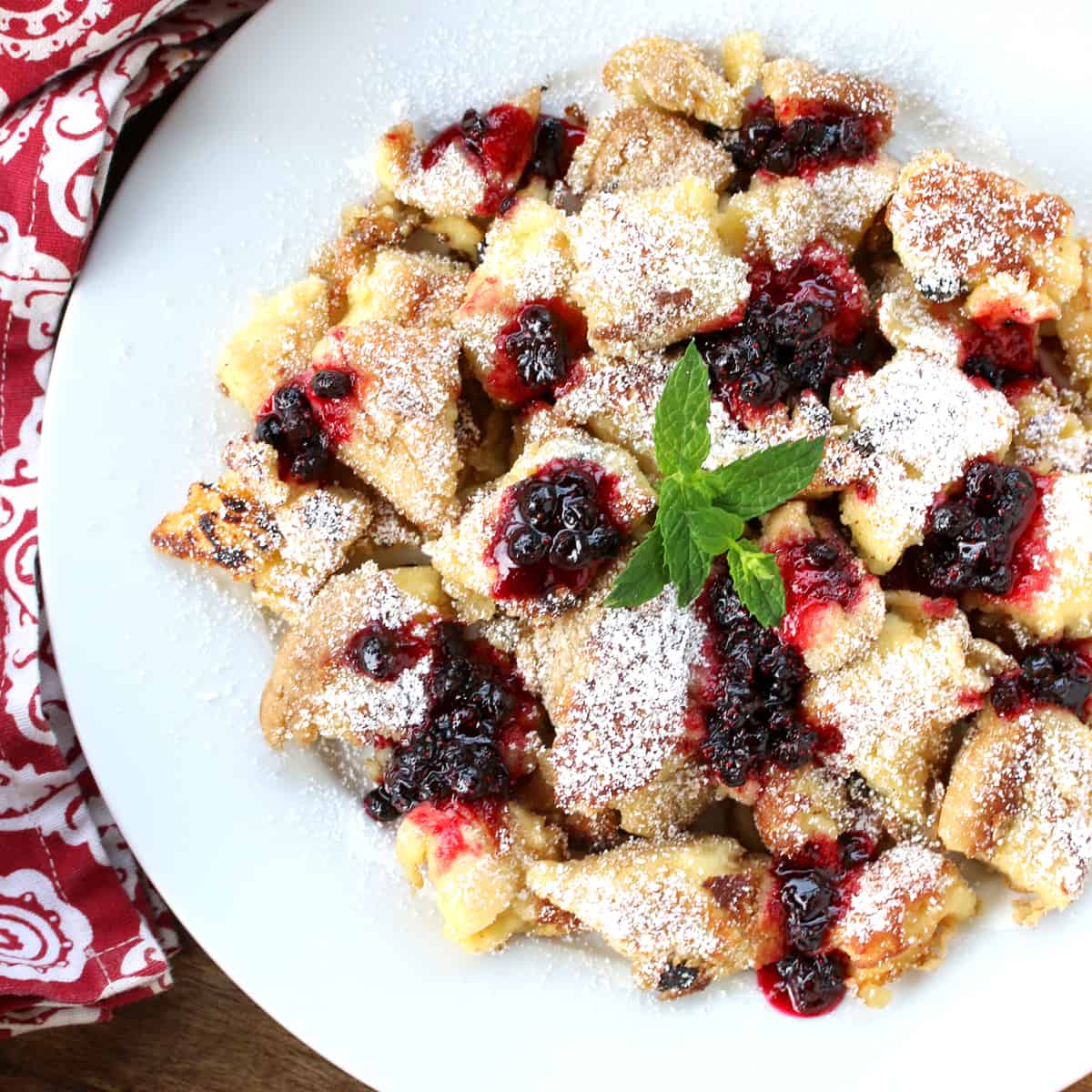 For more favorite German and Austrian desserts be sure to try our: 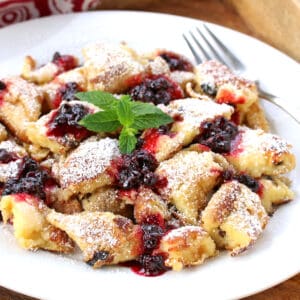