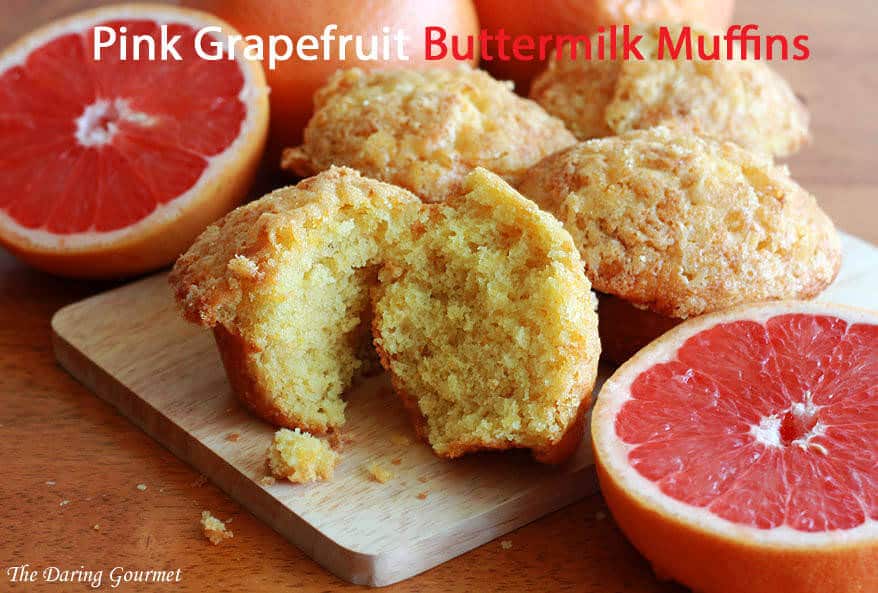 It’s grapefruit season!  Have you noticed the heaping mountains of them in the produce sections of the grocery stores?  Now is the time to buy those luscious pink grapefruits because this time of year they’re at their cheapest.  At 3 pink grapefruits for $1 we’ve been stockpiling them and enjoying them as a light, refreshing snack in the evenings while watching Frasier re-runs or whatever else we feel like zoning out on.  Sprinkle a little white stevia powder on them and voila!,  you have a delicious, juicy, sweet little snack.

It occurred to me last night as I was in the store bagging up another dozen grapefruits, what a shame there isn’t some other way these can be utilized.  Sure, there’s broiling them, but that’s not terribly interesting them.  Then there’s segmenting them and adding them to salads and such.  Also not the  most interesting.  So today as my little ones took their nap (they’ve actually been napping in sync the past few weeks.  I know.  It’s nothing short of a miracle), I had idea that was spurred by reaching into the fridge to grab a grapefruit for a noon-day snack (they’re oh so good when they’re cold) and seeing a jug of buttermilk while I was at it.  Buttermilk and grapefruit…sounded like a delightfully refreshing combination.  How to combine them…that was the question.  So I thought, how about Pink Grapefruit Buttermilk Muffins??  And so the experiment began.

I grabbed the flour, sugar, eggs, butter, and went to work zesting and juicing the grapefruit.  I wanted to use every bit of that wonderful fruit and get the full effect of both its sweetness and its tang.  To ensure an extra fluffy, soft muffin texture, I separated the eggs and beat the egg whites to fold into the batter.  As I poured the batter into the muffin tins, I thought they needed something on top.  Some final finishing touch.  I looked at the grapefruits I had stacked on the counter…they looked back at me…so I grabbed another one and zested it.  I poured some more sugar into a bowl and added the zest, combining it with my fingers to make a kind of crumbly grapefruit sugar.  It smelled heavenly!  I sprinkled it on top of the muffins, popped them in the oven, and became very, very pleased as my kitchen began to be filled with the most delightful aroma of sweet grapefruit.

They turned out.  Beautifully.  Deliciously.  My husband came home and I welcomed him at the door with a muffin and, after a brief kiss (yes, we love each other), pushed it into his mouth.  As soon as his eyes lit up and I knew I had a winner. 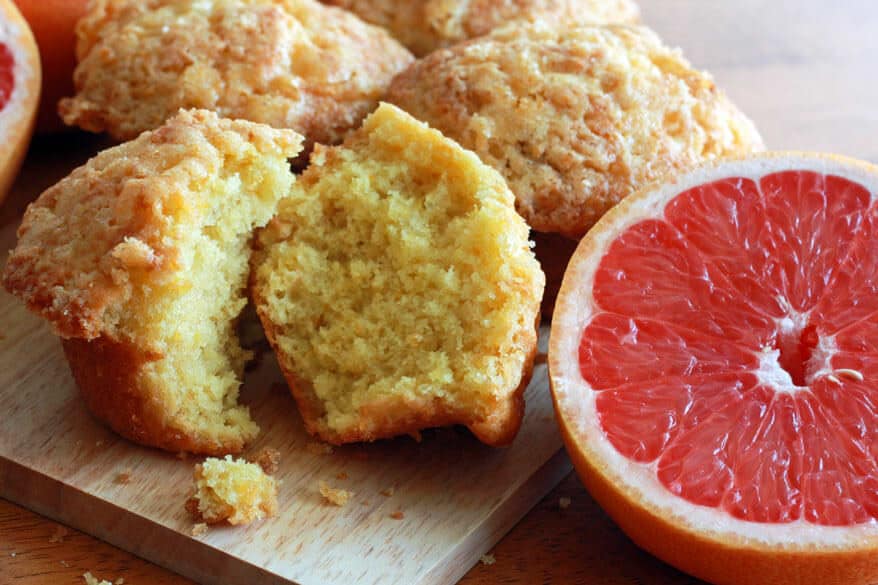 Pink grapefruits are wonderful.  They really don’t require any sugar at all to eat them plain.  So good, so juicy. 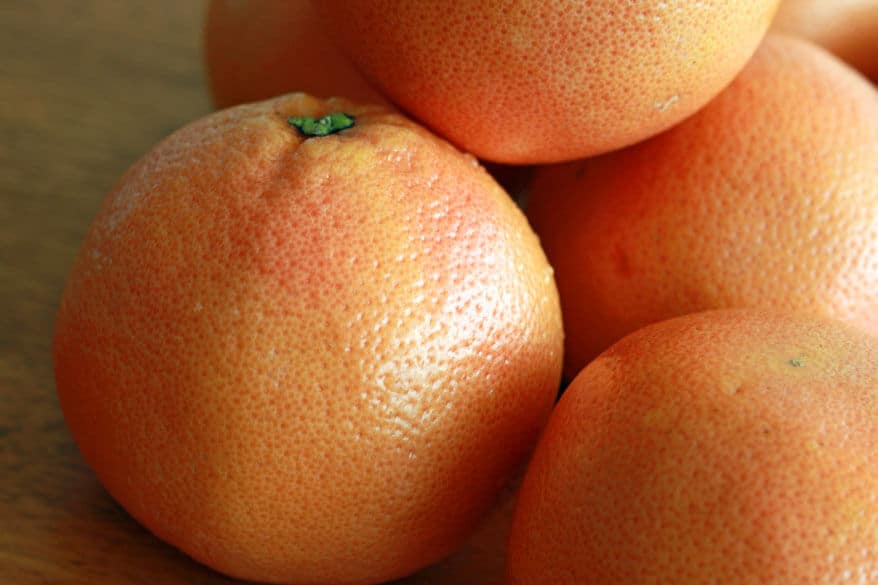 Zest an entire grapefruit.  You’ll have about a tablespoon and a half. 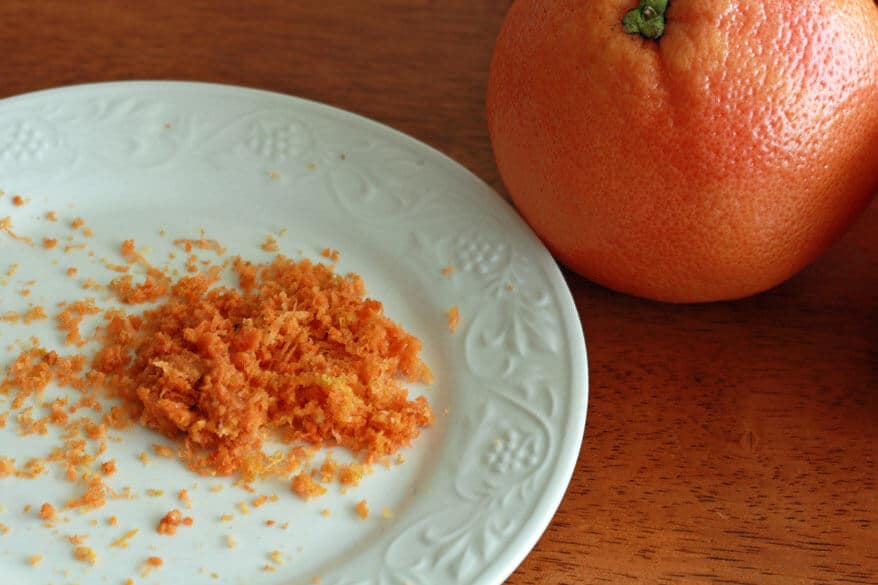 Cut the zested grapefuit in half and juice each half. 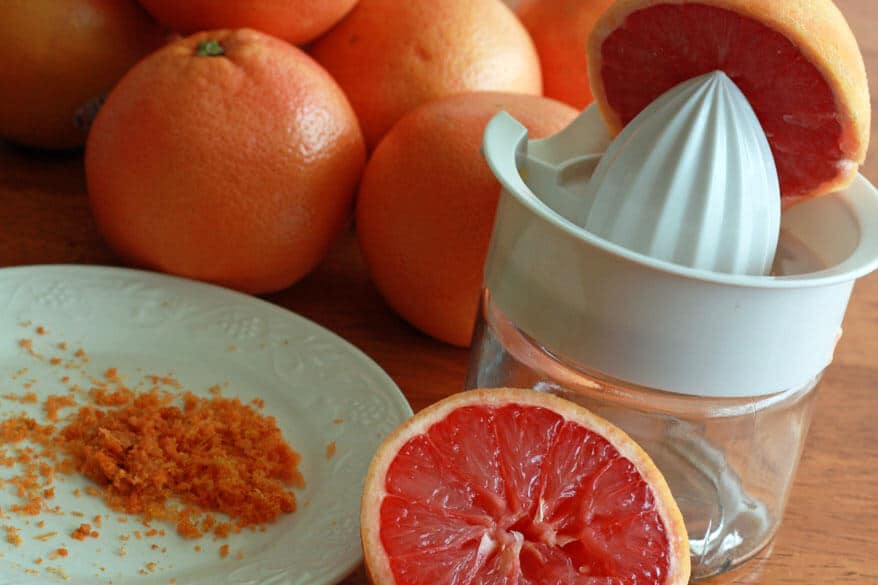 Cream the butter and sugar with an electric mixer.  Do this for several minutes until the texture is light pale and fluffy.

This is also the moment where I introduce you to my hand mixer.  Check out this avocado green beauty!  This belonged to my husband’s grandmother and it’s still going strong and never misses a beat (get it?).  To use an old adage, they just don’t make them like they used to.  I plan to get many more miles out of this thing before its finally laid to a much deserved rest. 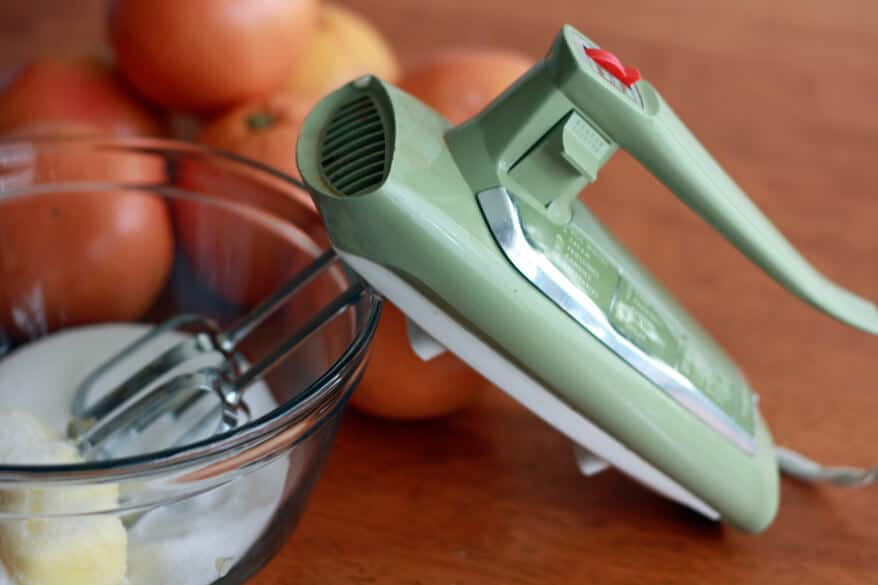 Where were we?  Oh yes, cream the butter and sugar. 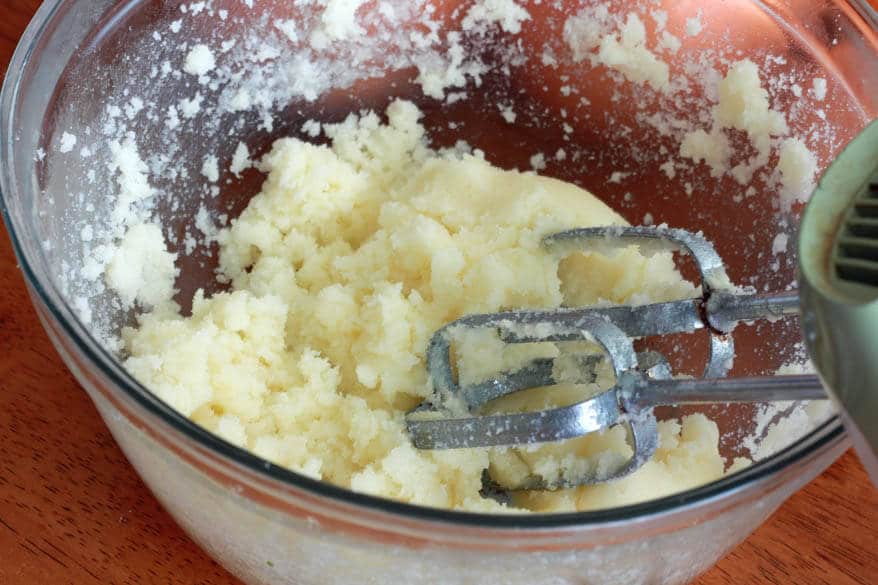 Add the egg yolks and beat until combined. 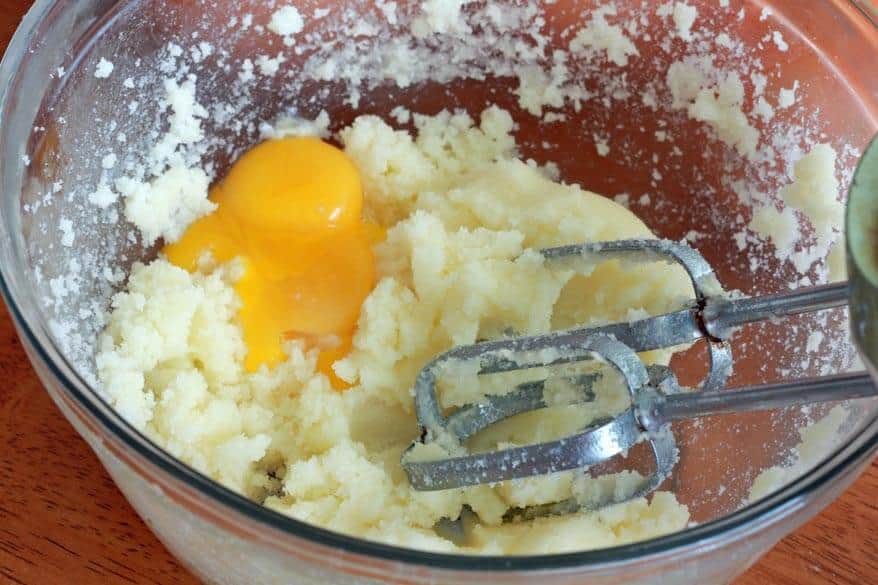 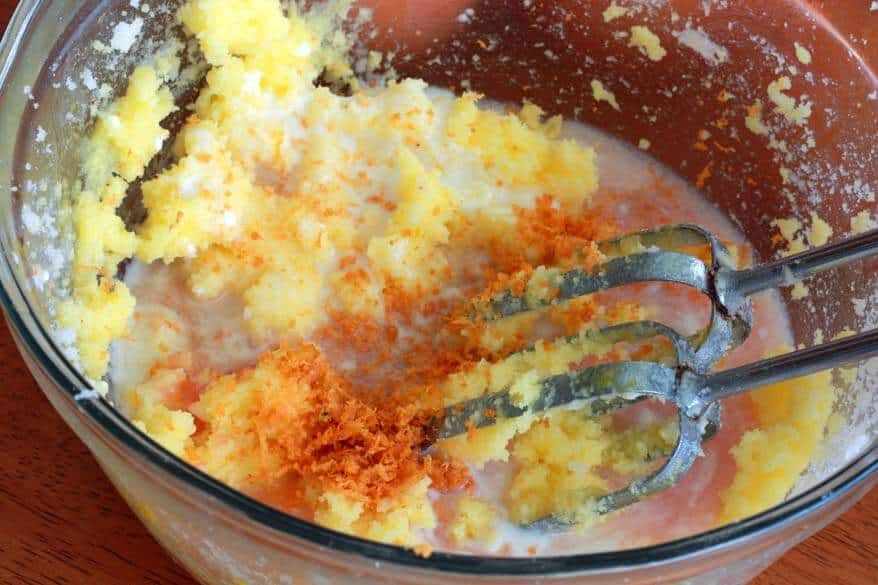 In a separate bowl, combine the flour, salt, baking powder and baking soda. 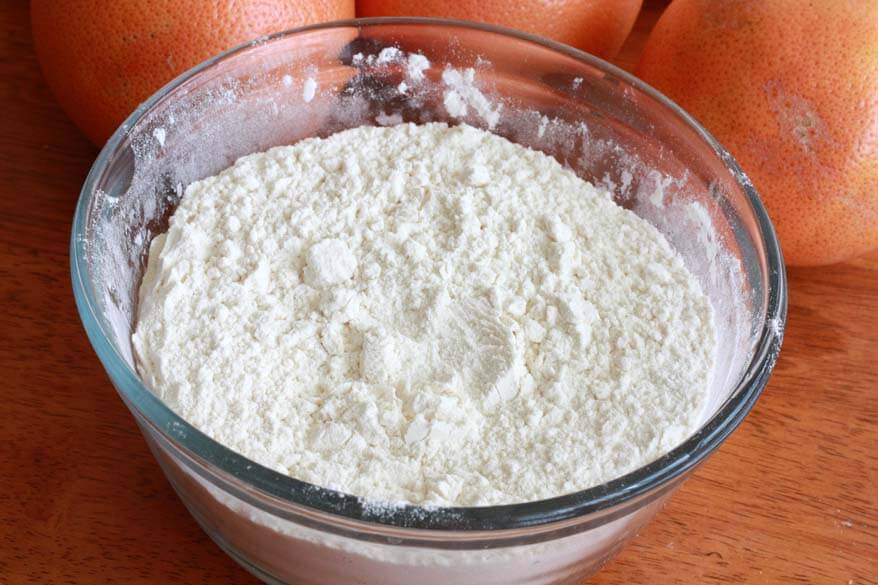 A bit at a time, gently fold the flour mixture into the batter with a rubber spatula.  Add the buttermilk gradually in between flour additions.  Lumps are fine.  You don’t want to over-mix this or the muffins won’t be light and fluffy. 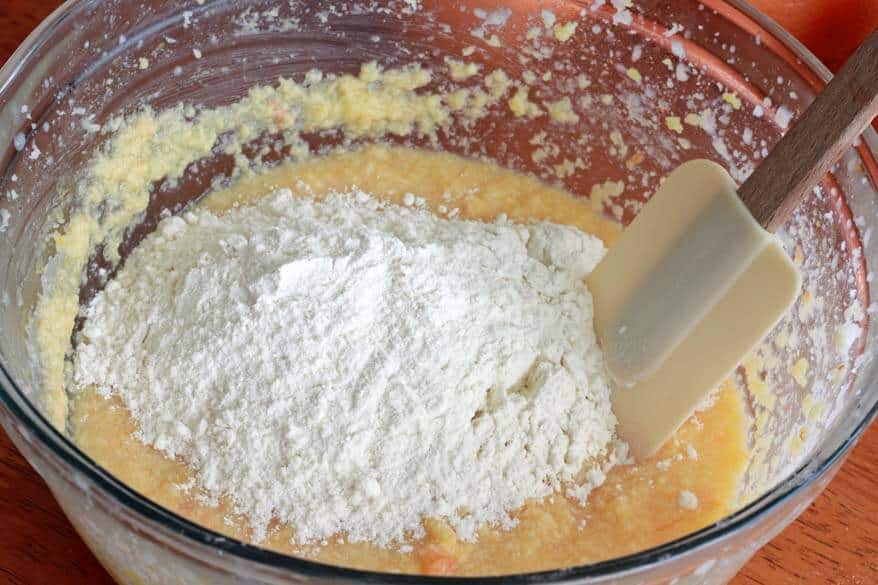 Beat the egg whites in a small bowl until soft peaks form. 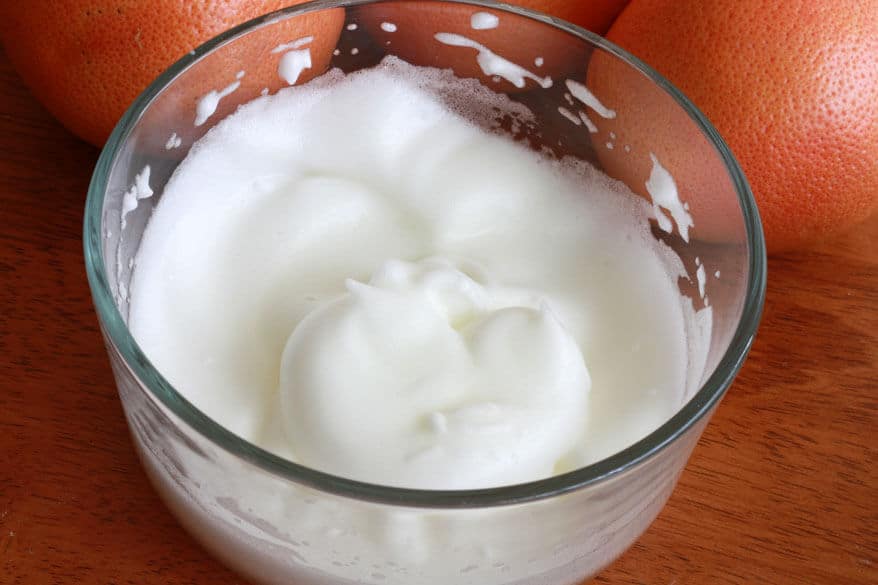 Carefully fold the egg whites into the batter with a rubber spatula, again being careful not to over-mix. 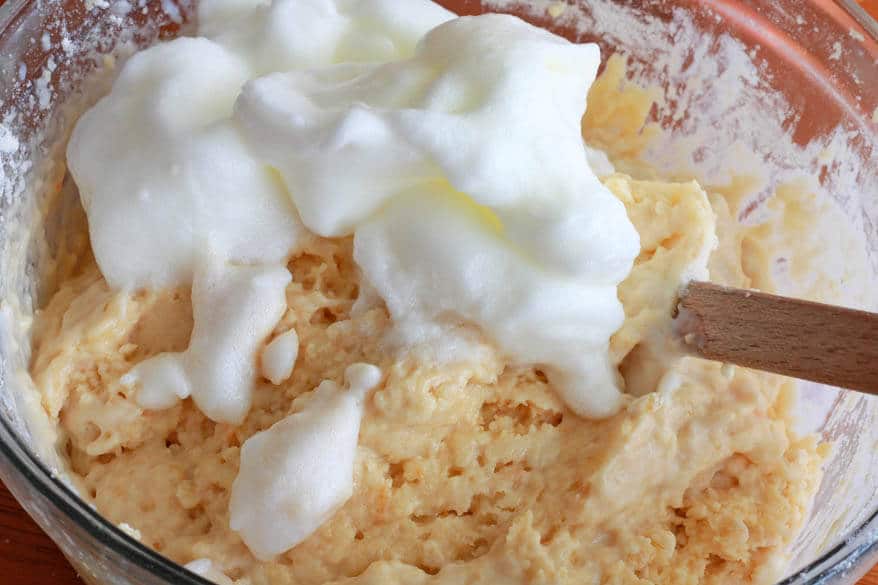 Once again, some lumps are fine. 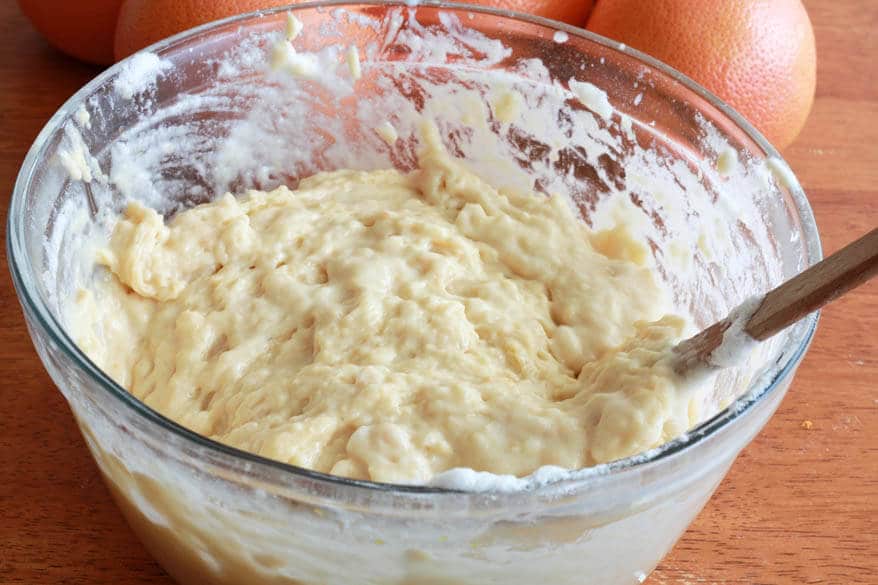 Combine the zest and sugar in a small bowl for the grapefruit sugar topping. 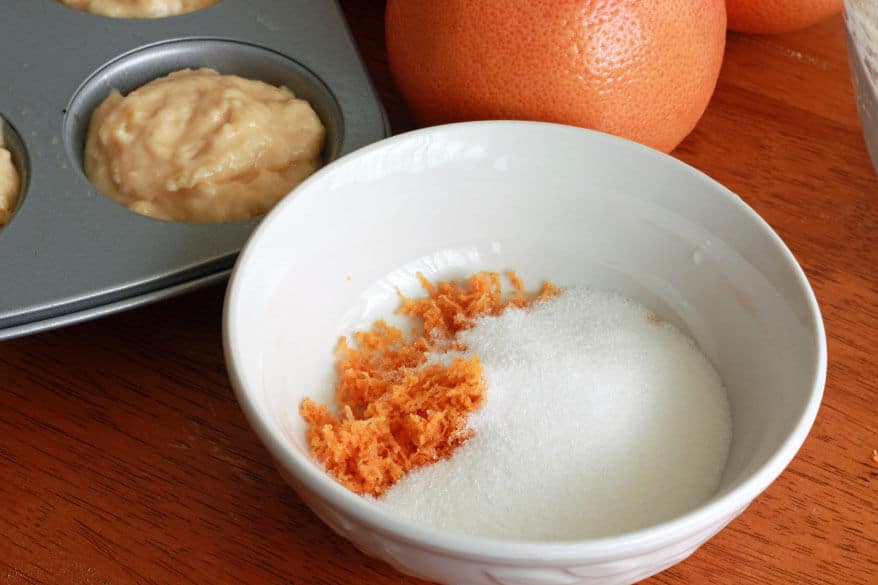 Use your fingers to combine and crumble the mixture. 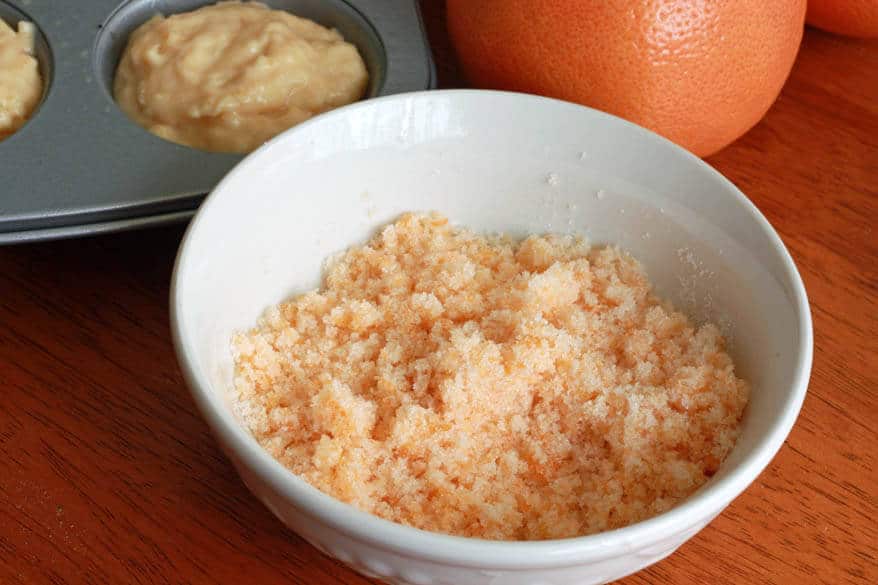 Spoon the batter into the muffin tin, about 3/4-ish of the way full. 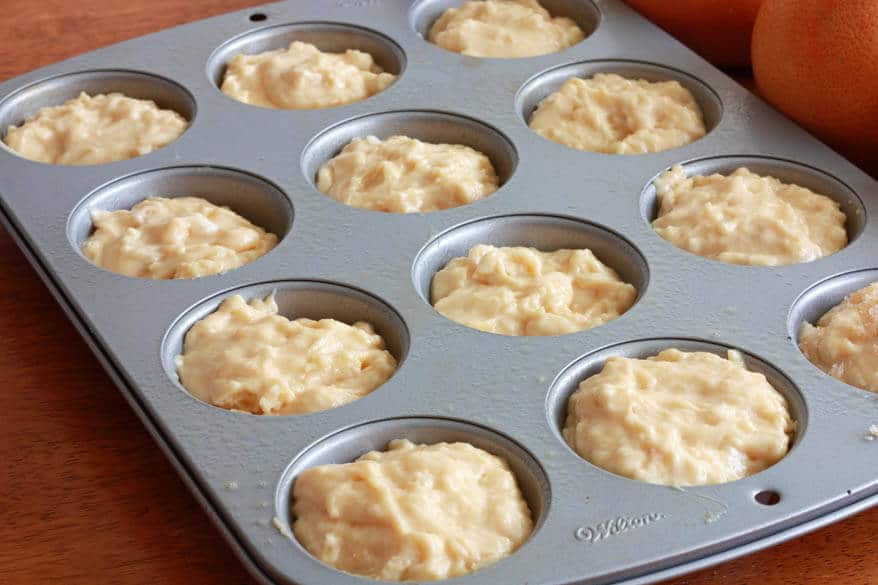 Sprinkle the grapefruit sugar on top and place the muffin tin in a preheated oven on 350 F.  Bake for 20-25 minutes or until a toothpick inserted into the middle comes out clean. 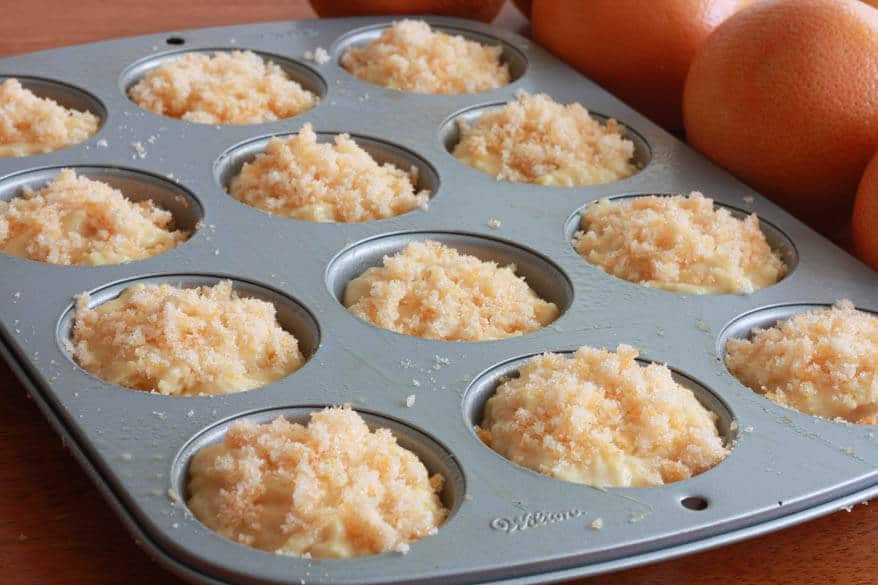 Place the muffin tin on a wire rack and allow it to sit for 5 minutes. 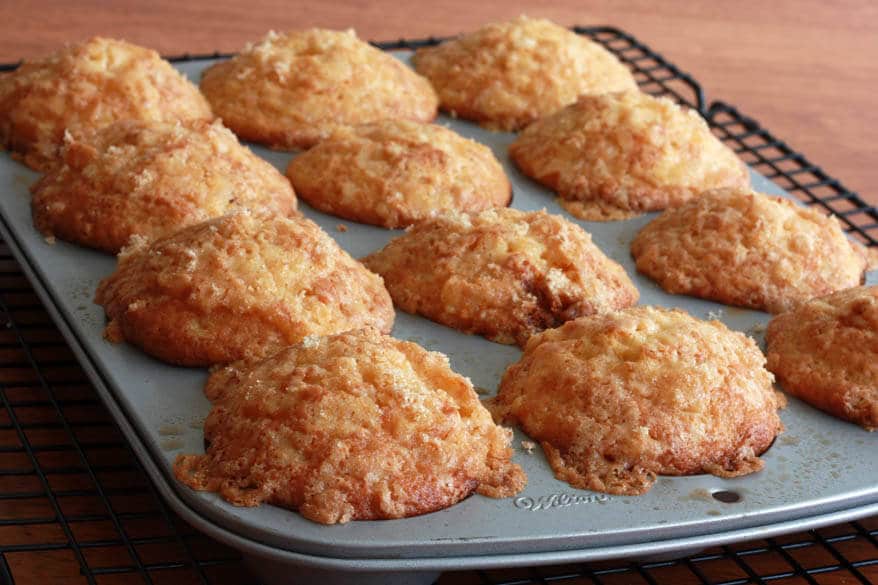 Remove the muffins and place them on the wire rack to cool completely. 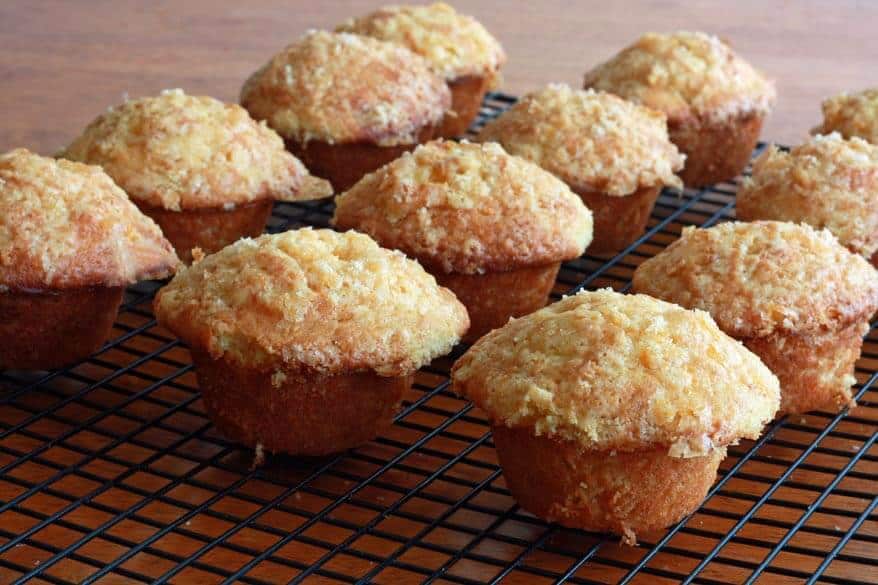 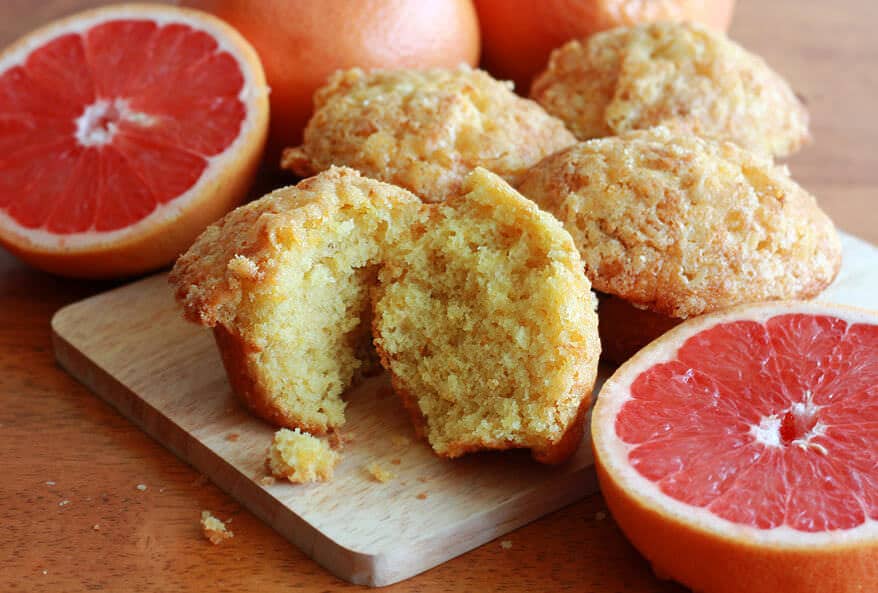 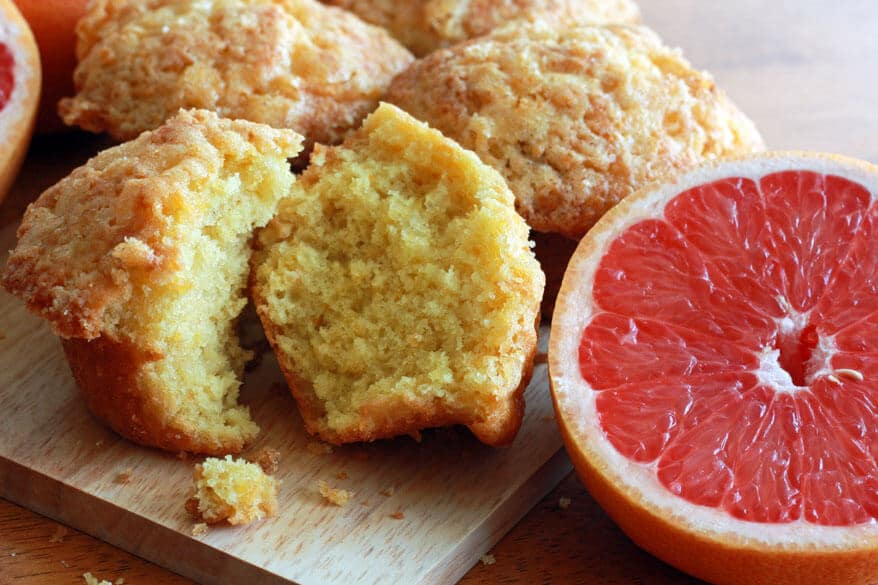