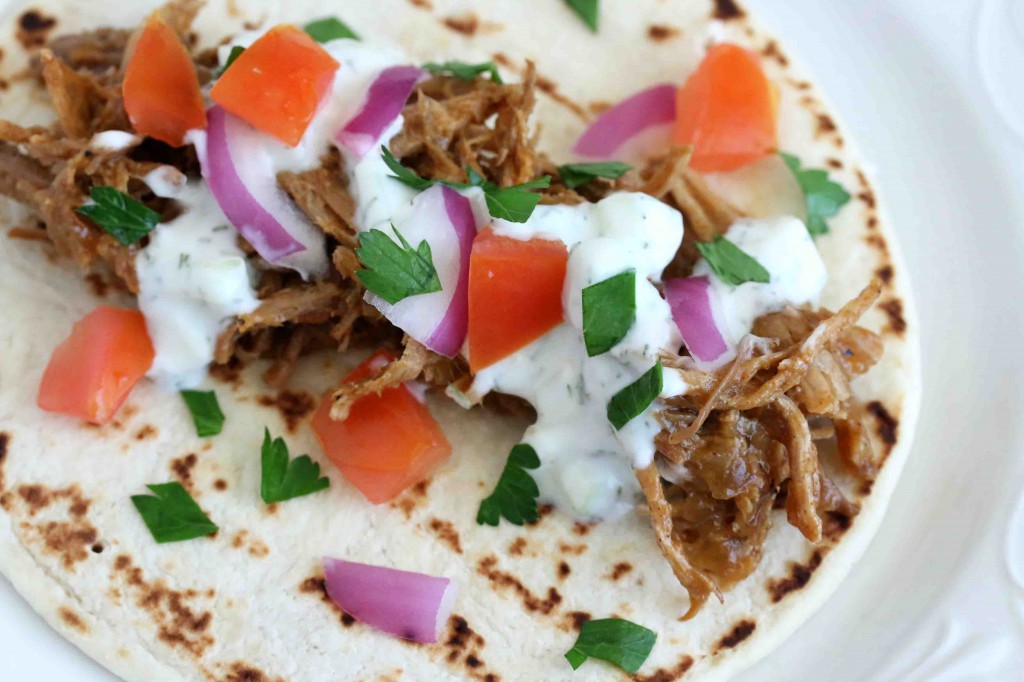 The Best Homemade Gyros recipe I posted a while ago has been a family favorite for several years.  These Pulled Pork Gyros are an even easier take on that original recipe with identically flavorful results.

This recipe was developed very spontaneously.  It was one of those days where you just don’t feel like cooking (yes, even food bloggers have those moments).  I had a frozen pork roast that was screaming to be used and so I threw it in the slow cooker with some chopped onions (that’s always a great place to start, right?).  I wasn’t sure yet where I was going with it and turned the setting to LOW while I gathered up the 267 (that’s how it felt anyway) tiny plastic toy animals my 4 year old son had scattered throughout the kitchen drawers and cabinets (like I said, it was one of those days.)  As I reached for the aardvark wedged between two pots inspiration struck:  Just grind up a batch of my Greek Seasoning Blend and throw it in with the pork.  It’ll be gyros…pulled pork style.  I unwedged the aardvark, added it to the heap of rescued animals, then quickly whipped up the Greek seasoning, a quick tzatziki sauce, and the slow cooker did the rest.

At 5:30pm my husband got home, the house smelled like heaven, and dinner was ready.  We all sat down, including several carefully selected toy animals that our son strategically placed around (and on) his plate (the aardvark was left behind this time, replaced by a very active alligator that seemed particularly interested in the tzatziki sauce.)  While the alligator busied itself with the sauce and provided a soundtrack of slurping noises, our two year old daughter plunged into the gyros and ate every last shred of her pulled pork.

The table was cleared, the alligator was rinsed off, all tummies were happy and full, and all was well with the world.

Give these Pulled Pork Gyros a try and you’ll be glad you did.  Not only do they taste fantastic, they’re so quick and easy to make. Plus, everything, including the tzatziki sauce, can be made ahead of time.  I’ve made this recipe twice already in the last week and a half and it’s perfect for reheating and enjoying for a spontaneous lunch. 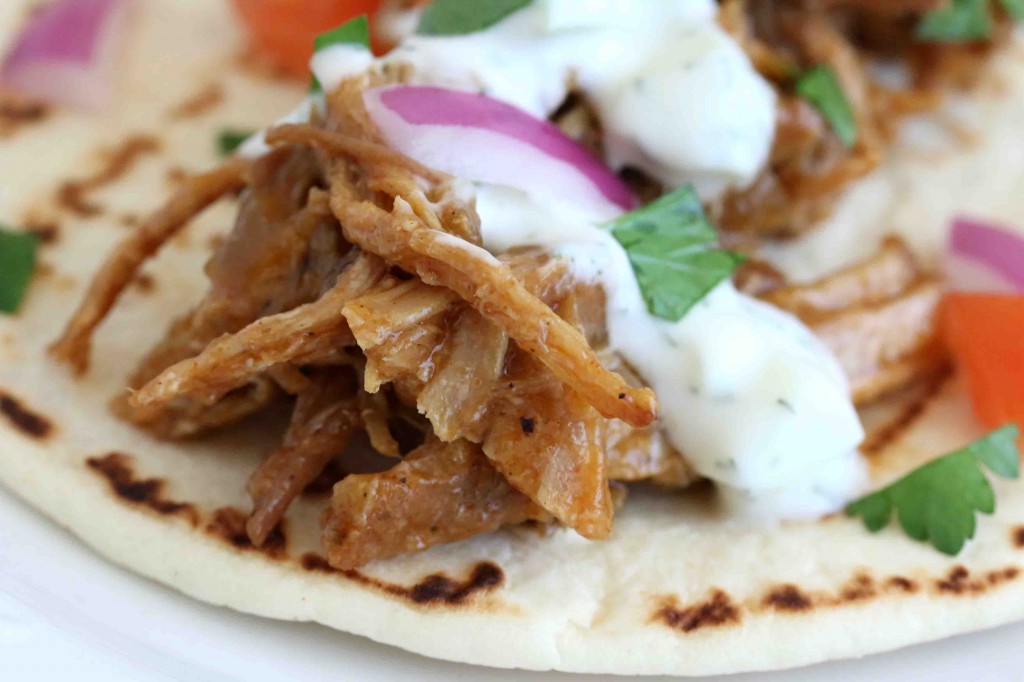 Prepare the Greek Tzatziki Sauce and keep refrigerated until ready to use. 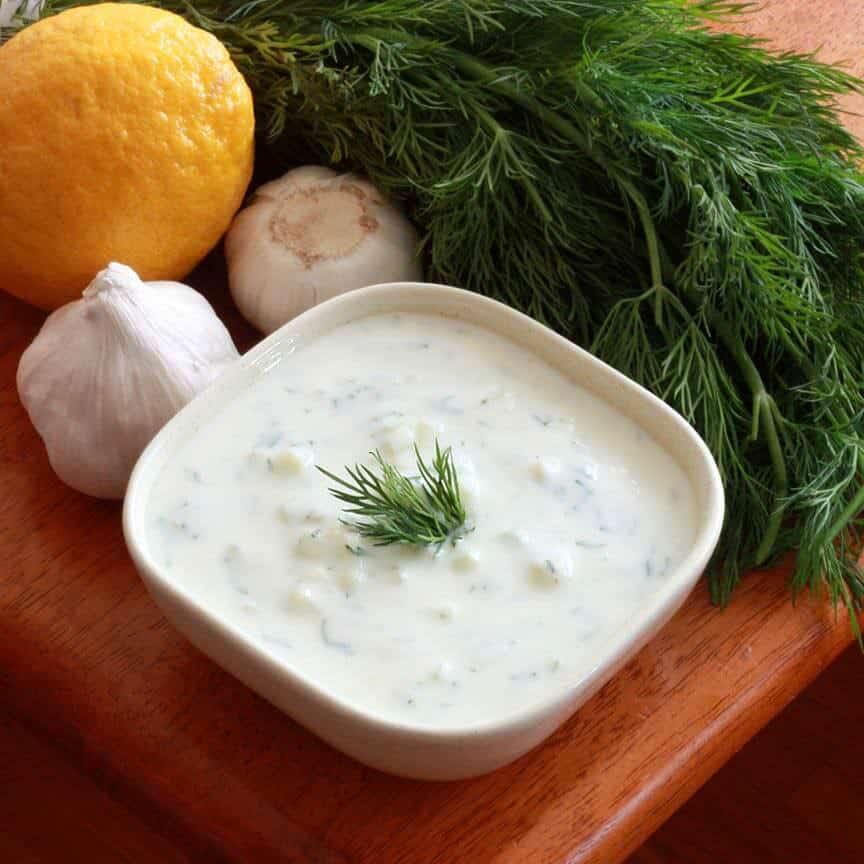 Prepare the Greek Seasoning Blend (you’ll be using the entire batch for these gyros). 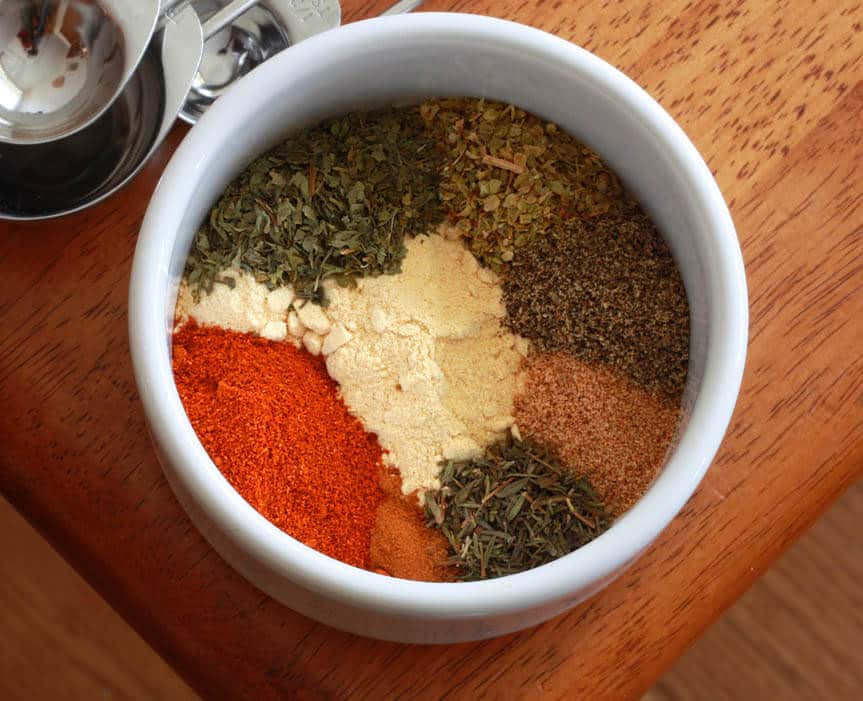 Place the chopped onions, garlic, roast, Greek seasoning, and water in a slow cooker, give it a little stir, and cook on LOW for 6-8 hours or on HIGH for 4-5 hours. 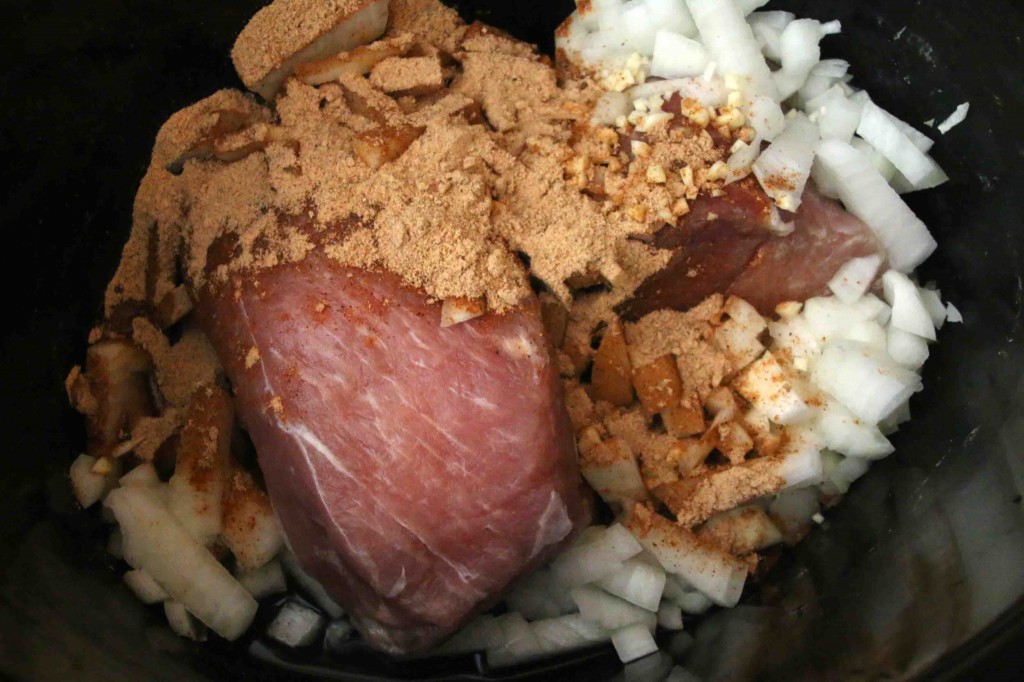 Shred the pork on a plate with two forks.  Return it to the slow cooker and let simmer for a few more minutes to allow the juices to absorb into the shredded meat. Taste and add more Greek seasoning if desired (if adding more, let it cook a few more minutes). 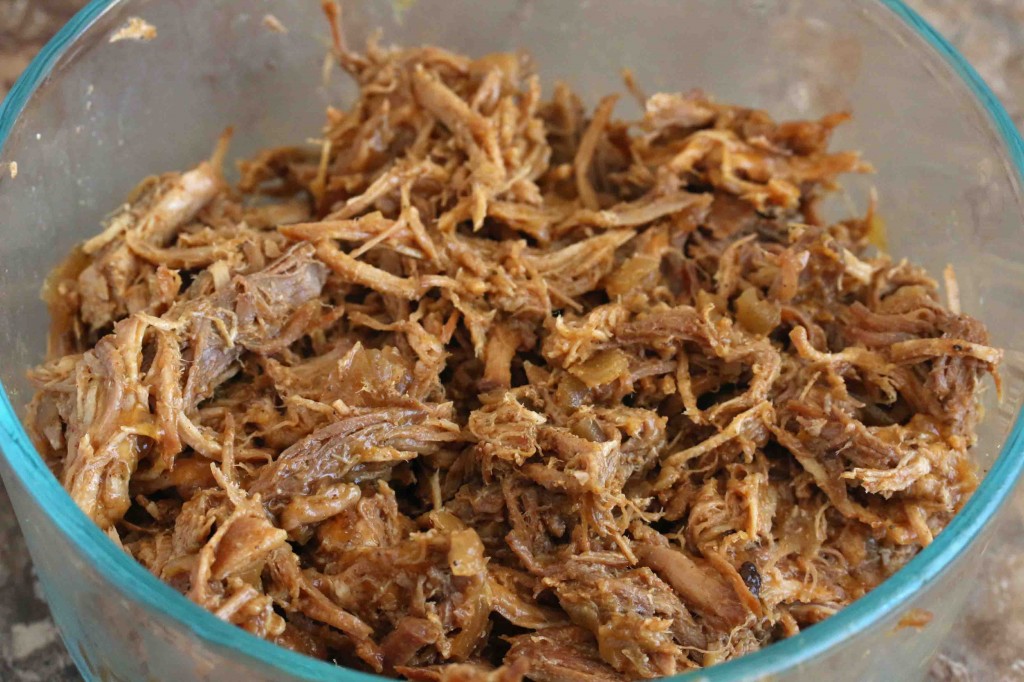 Serve on warmed flatbread or pita pockets with the tzatiki sauce and accompaniments. 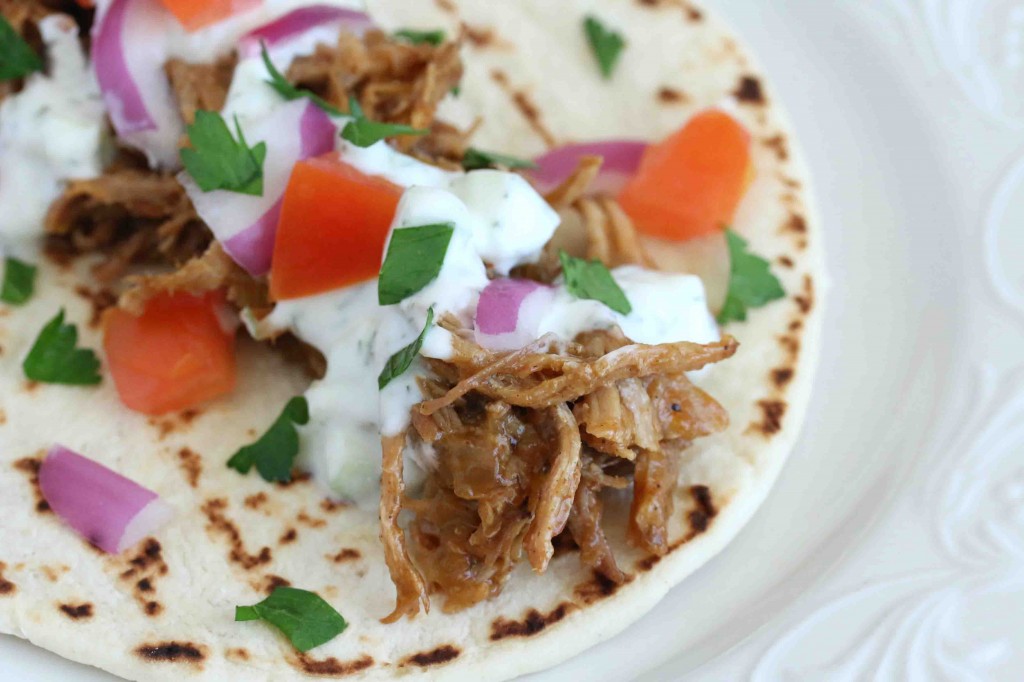 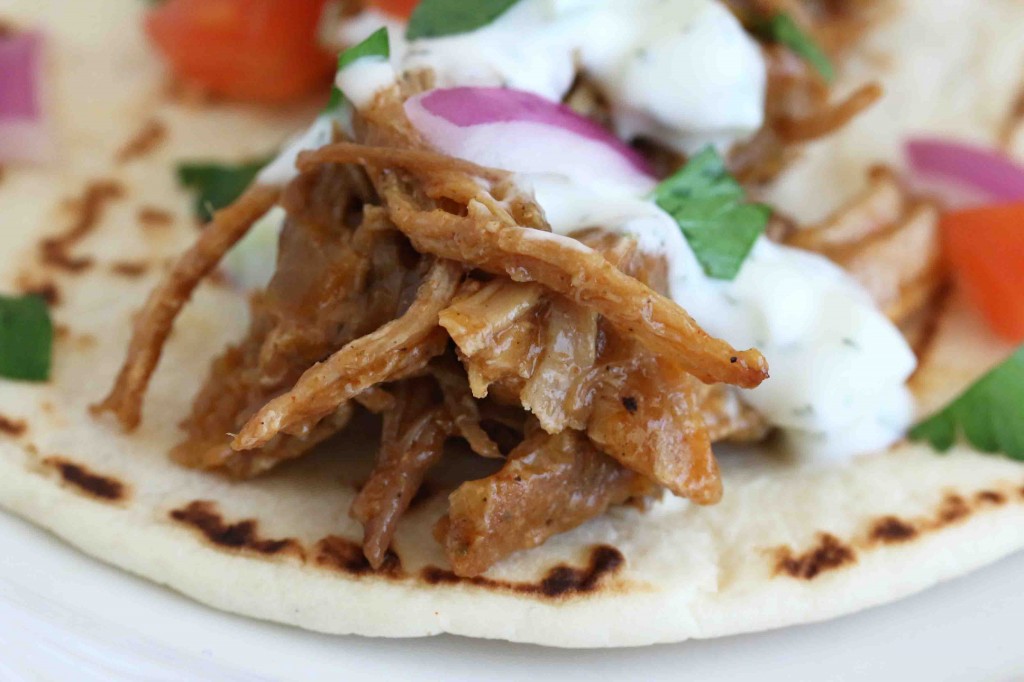 Print
Prep time
5 mins
Cook time
5 hours
Total time
5 hours 5 mins
: Kimberly Killebrew, www.daringgourmet.com
Serves: 6
Ingredients
Instructions
Notes
Preparation time excludes the time to make the seasoning and tzatziki sauce, both of which are quick and can be made well in advance.
The pulled pork can also be made in advance and will keep in the fridge for about 3 days.
3.5.3226