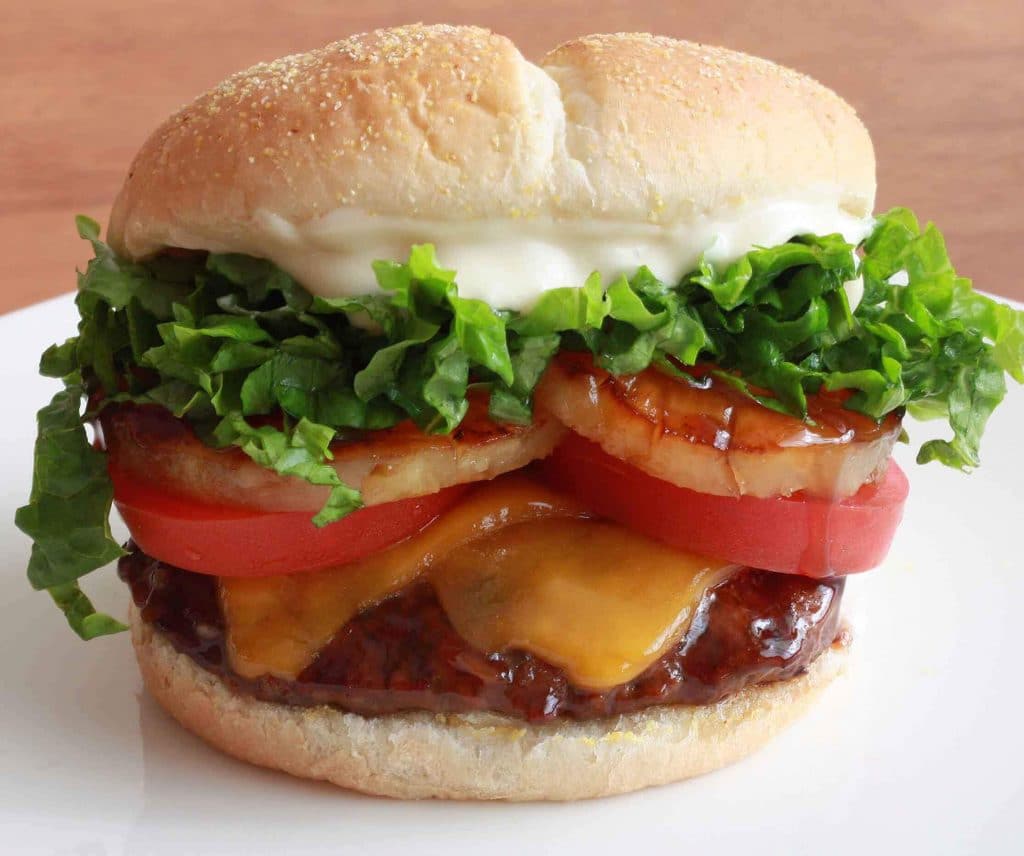 To quote a friend, “Sometimes you just need a great burger.”  I couldn’t agree more.

Todd and I have our favorite burger joints, and Red Robin is one of them.  Todd orders the same burger every.  single.  time.  The Banzai Burger.  His favorite.  One day he said, “Hey, you should really try and make it here at home.”  More convenient, cheaper, and full control over beef quality.  I accepted the challenge and presented him with my copycat version of his beloved Banzai Burger.  Knowing he is the ultimate Banzai Burger critic, I waited a little nervously.  He took a bite, his eyes lit up, and he announced:  “This is every bit as good!  I don’t even feel the need to go to Red Robin anymore for this!”  (I must say I feel slightly guilty that Red Robin lost a customer because of me.  But I’m sure we’ll still be return customers on those date nights when I hang up the apron and that ol’ hamburger craving comes a-callin’.)

So let’s get to that recipe, shall we?

But first…the History of the Hamburger!

Ground meat has been eaten for centuries.  We know it dates back to at least the 12th century with Ghengis Khan. 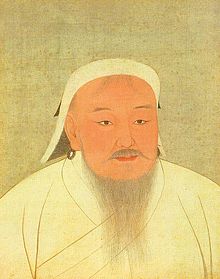 The armies of Genghis Khan would use scraps of mutton and form them into patties.  In order to tenderize the tough meat, they would put the patties under their saddles as they rode into battle and then eat the meat raw.

Next we have Khublilai Khan, Genghis’ grandson. 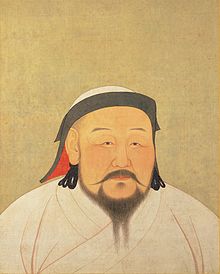 In the 13th century, the armies of Khubilai Khan invaded Russia on horseback, straddling their meat patties as had become custom.  Russia was thus introduced to the concept of eating raw ground meat and adapted it, calling it “steak tartare.”  Over time, the Russians added chopped onions, raw eggs, and some seasonings.  German ships visiting Russian ports were introduced to to steak tartare and brought it back to Hamburg where it soon became popular throughout Europe as a delicacy.  (*Official Announcement* so as to avoid the formation of any false hopes:  The Daring Gourmet will not be featuring steak tartare at any point…ever!)

By the late 18th century, German ships from Hamburg stopping at New York City Ports were welcomed by local eateries with “Hamburg Steaks”, or “steak cooked in the Hamburg style.”  By the 19th century the Hamburg Steak was cooked with spices and herbs and became known as “Frikadelle” in Germany.  A popular meal among poorer classes, the tough meat was sometimes stretched with breadcrumbs and chopped onions.  These cooked beef patties were introduced to the U.S. by German immigrants in the 19th century.  At some point soon thereafter these meat patties began to be grilled and served between two pieces of bread.  From that springboard the first official hamburger was born.  While multiple legends and tales exist as to who the true first inventor the hamburger was, once thing is certain:  Though the ground meat patty went through a series of evolutionary changes over the centuries (and thank goodness for that!), the modern hamburger we know and love today is an all-American invention! 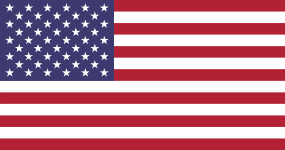 And so, without further ado – the Red Robin Banzai Burger Copycat Recipe!

Alright, first let’s make the Homemade Teriyaki Sauce.  You’ll remember that recipe from when I posted it several weeks ago.  Yep, that’s the one.  It’s a winner.  And don’t worry, it’s super quick and easy. 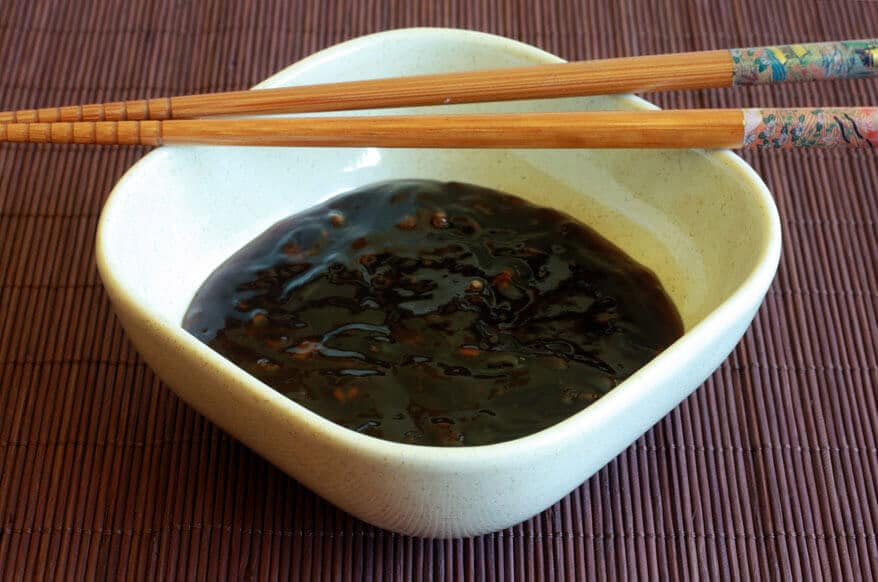 Spread both sides of the hamburger patties with teriyaki sauce.  Grill according to desired doneness, basting regularly with more teriyaki sauce, and add the cheddar cheese on top near the end to melt. 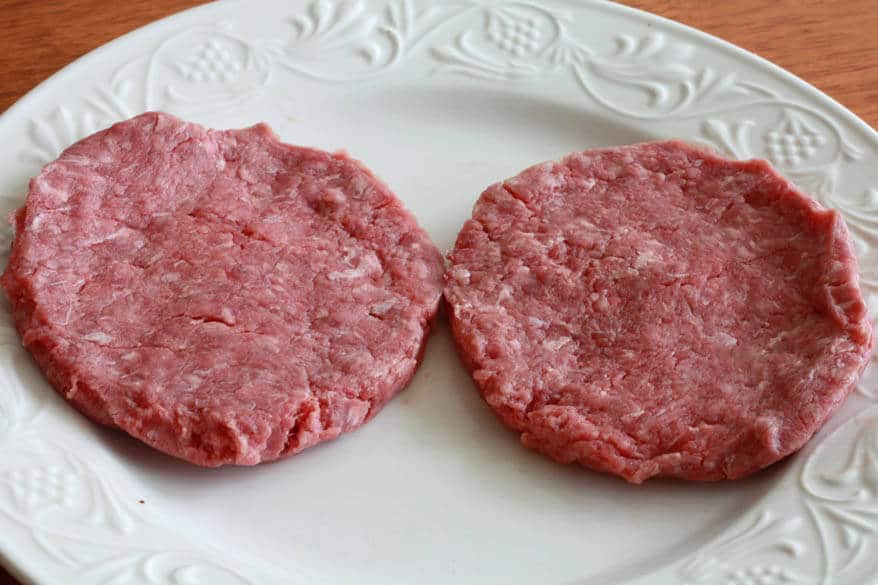 Have the rest of the ingredients ready to go by the time the meat is done.  Shred the lettuce, slice the tomatoes, and drain the pineapple rings. 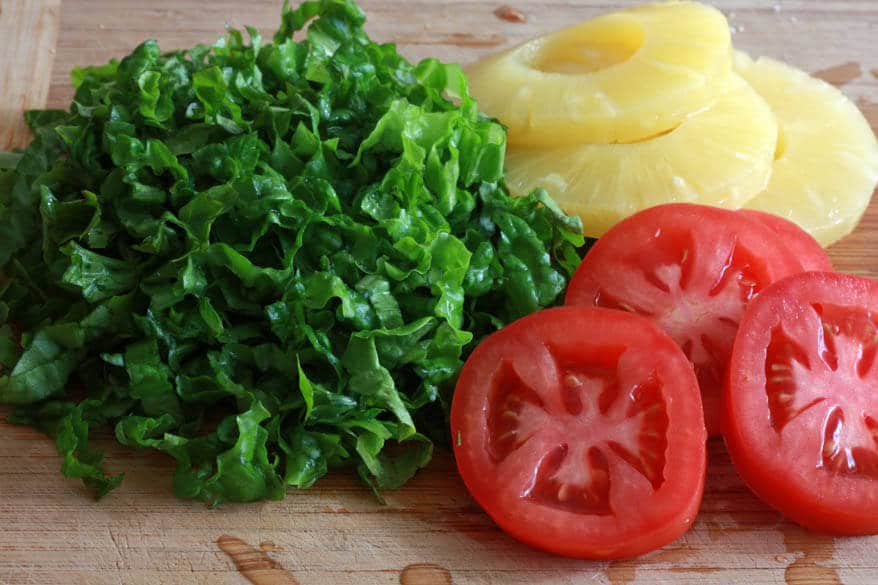 Spread both sides of the pineapple rings with teriyaki sauce and grill them for about a minute on both sides. 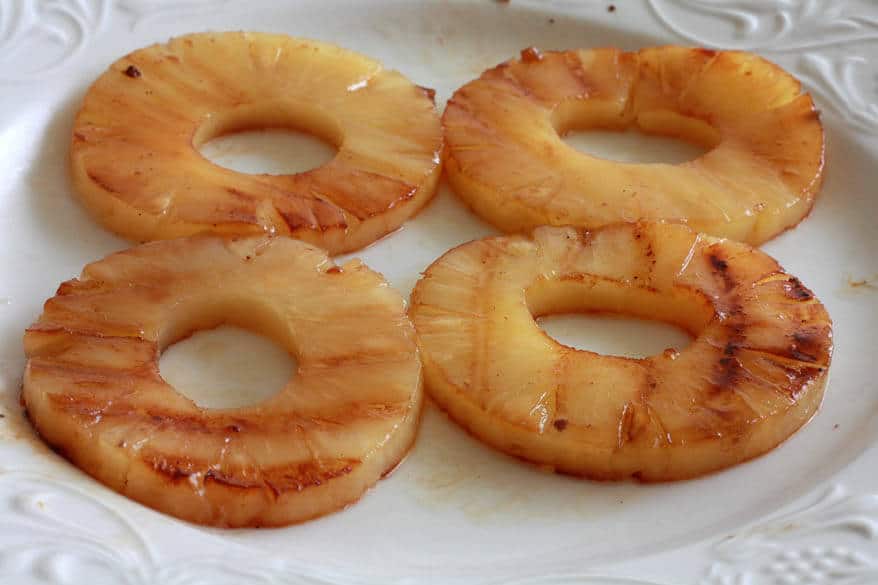 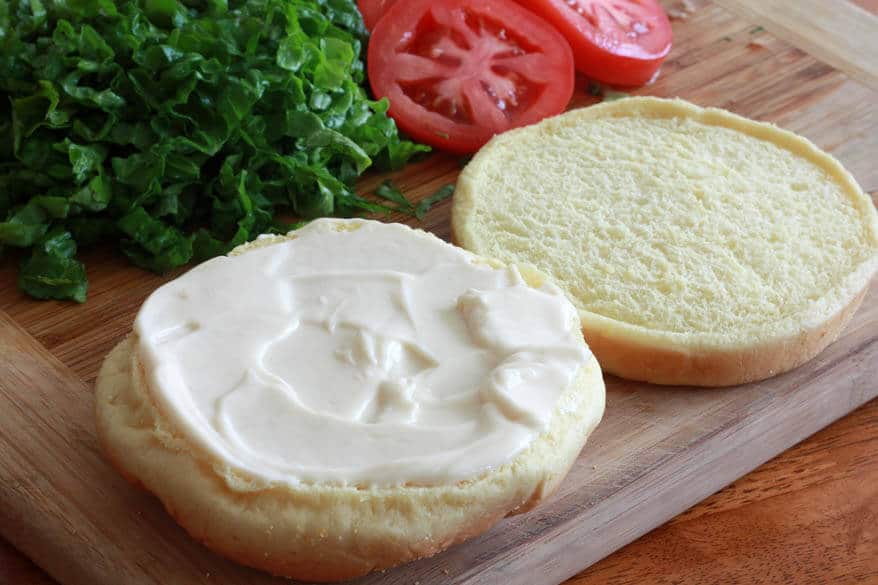 Place the beef patty on the bottom half. 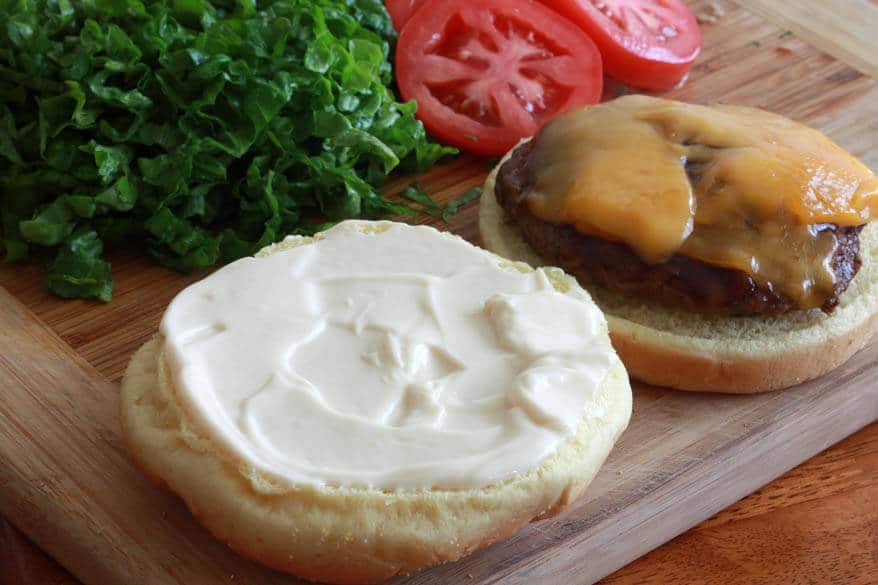 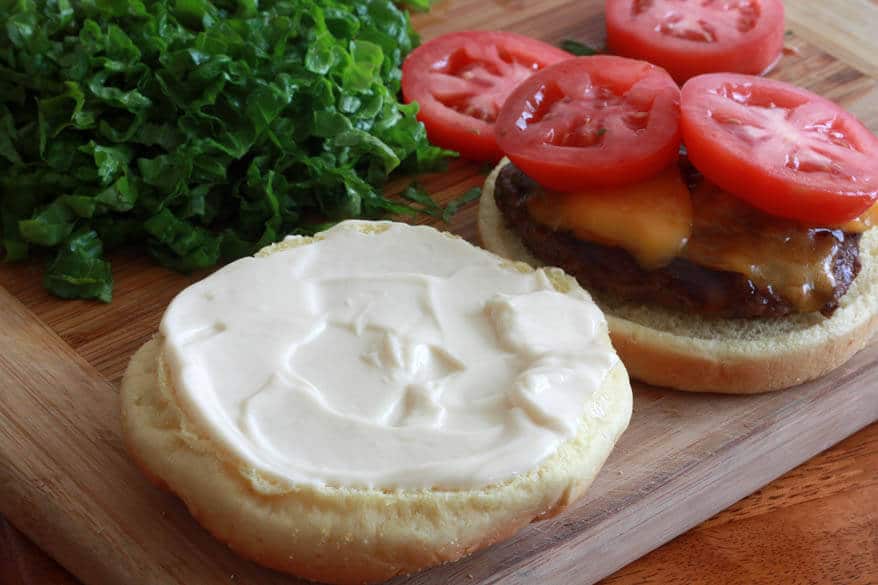 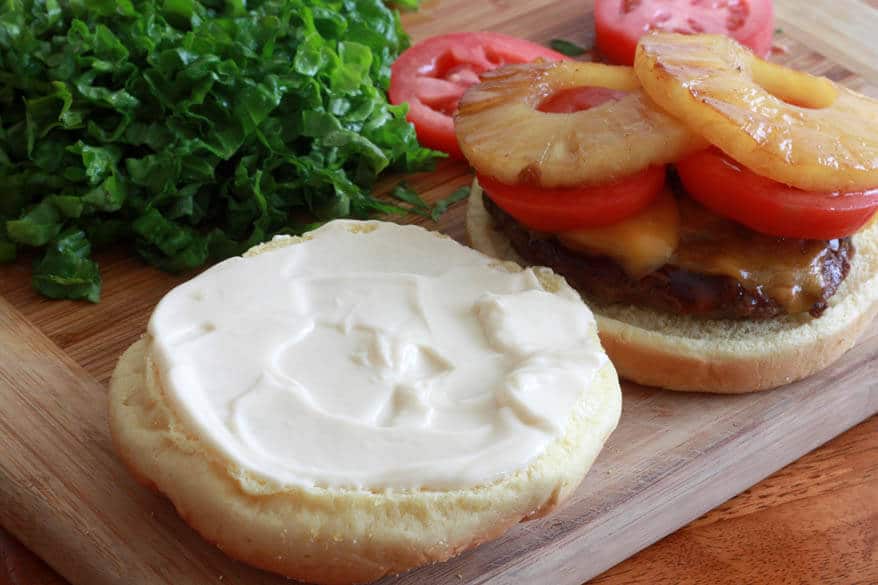 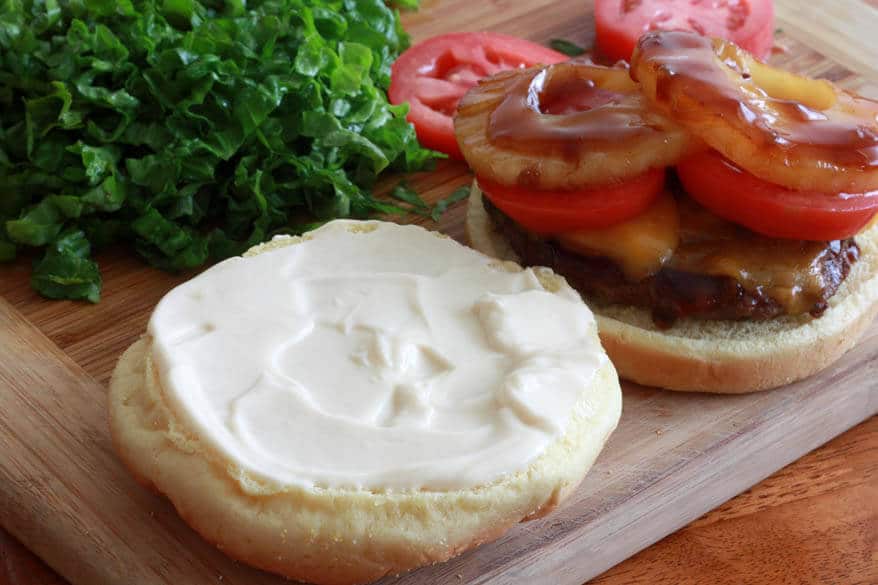 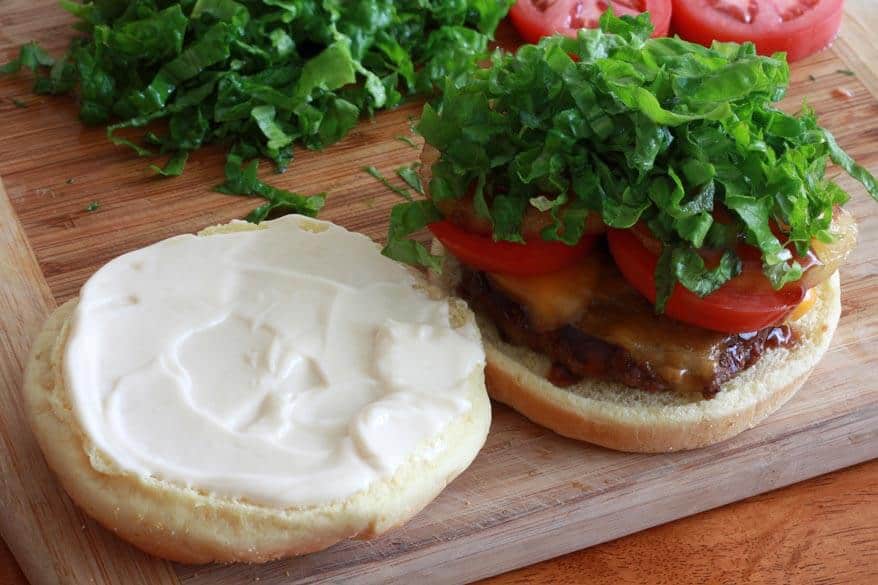 Place the other bun half on top. 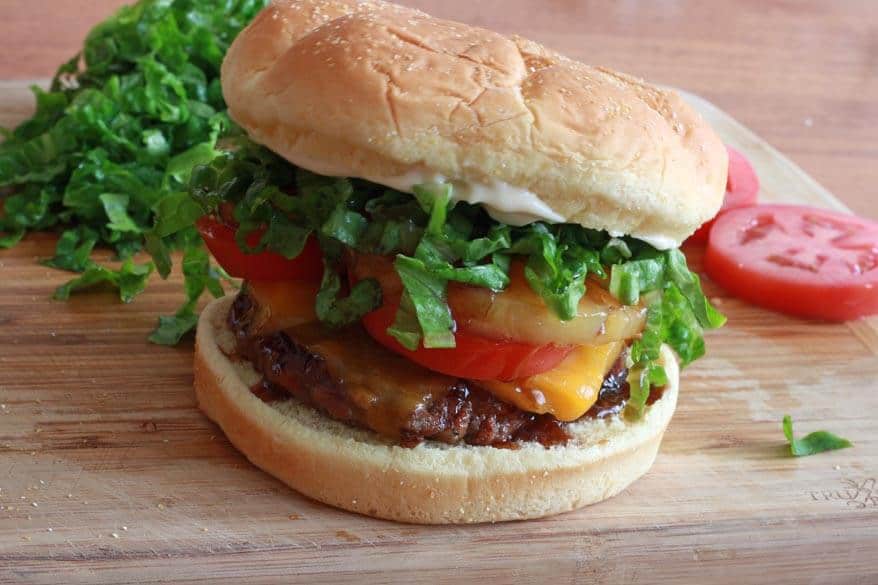 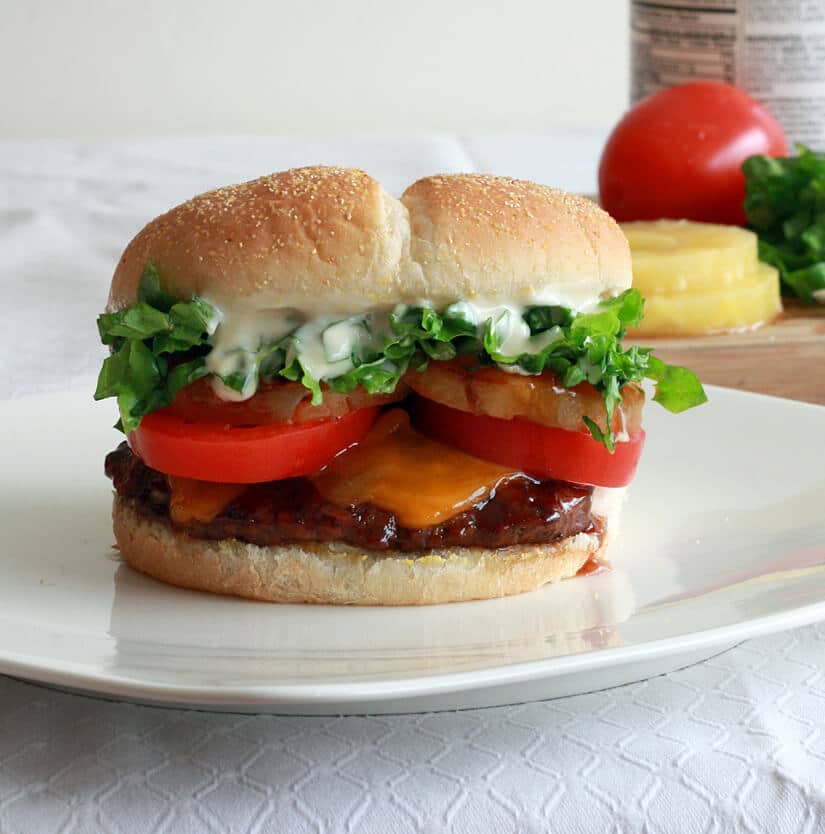 Ooooh, let’s repeat that shall we?

Layer on the sliced tomatoes and grilled teriyaki pineapple rings. 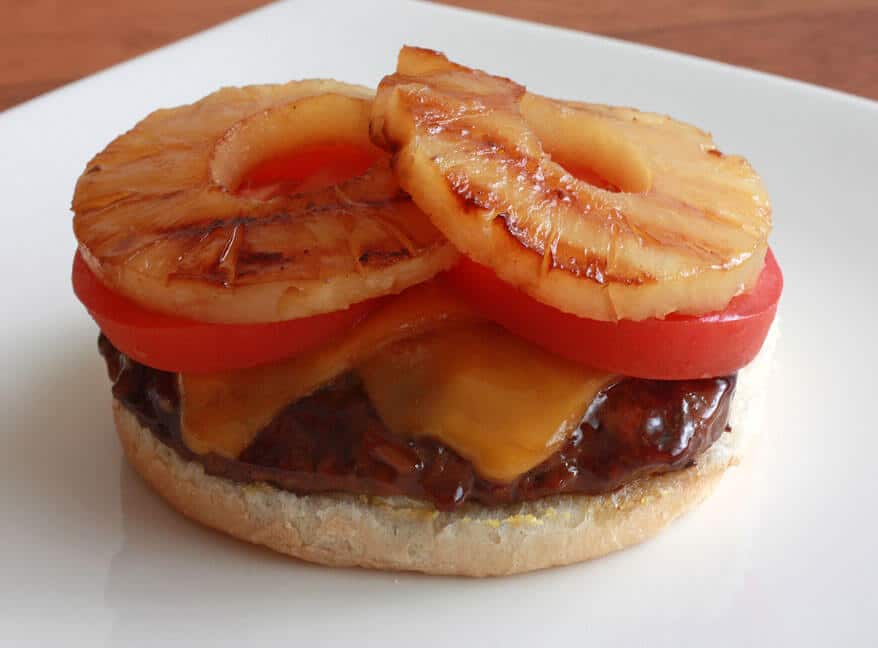 Slather on some more of that luscious homemade teriyaki sauce. 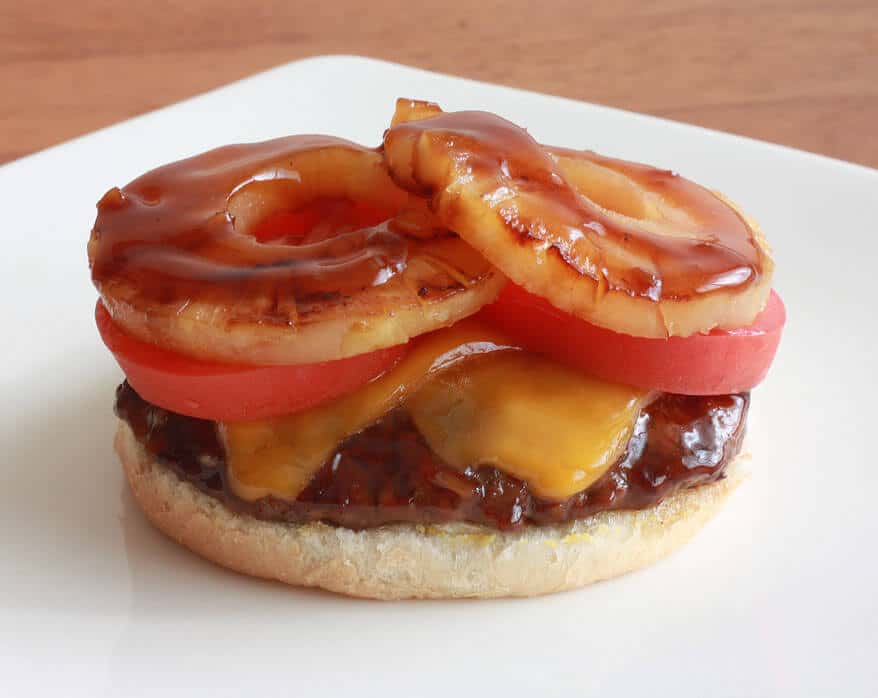 Top with some freshly shredded green lettuce.  Spread mayonnaise on the top half of the bun and place it on top. 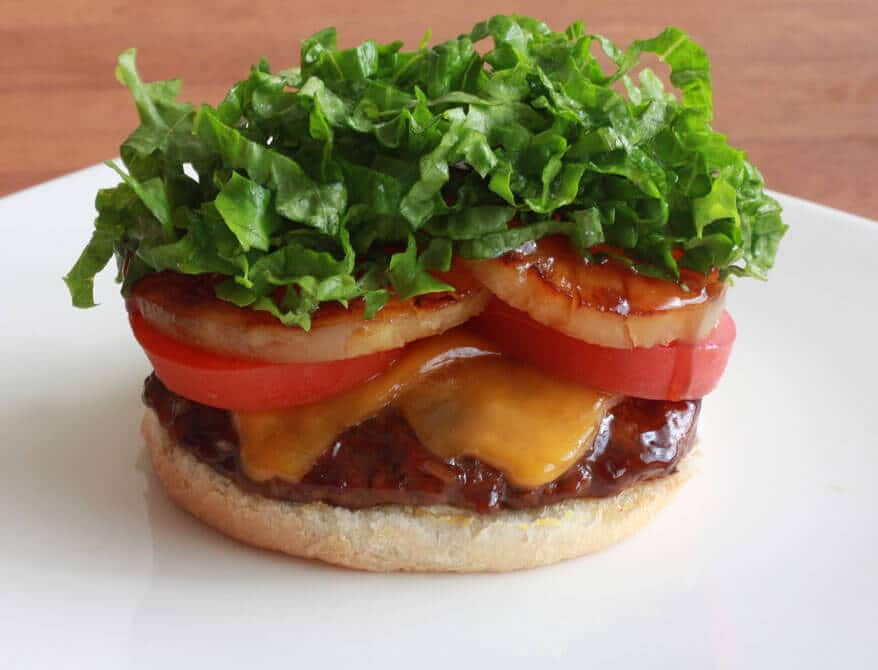 And now it’s time to… 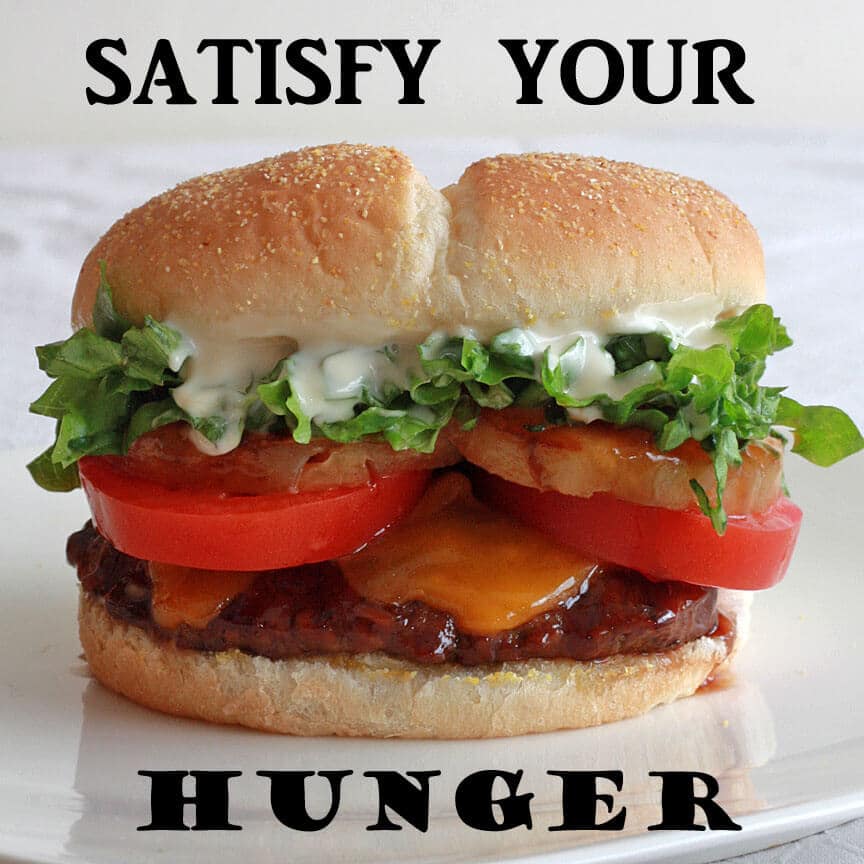