As an Amazon Associate I earn from qualifying purchases.
6139shares
Jump to Recipe Print Recipe 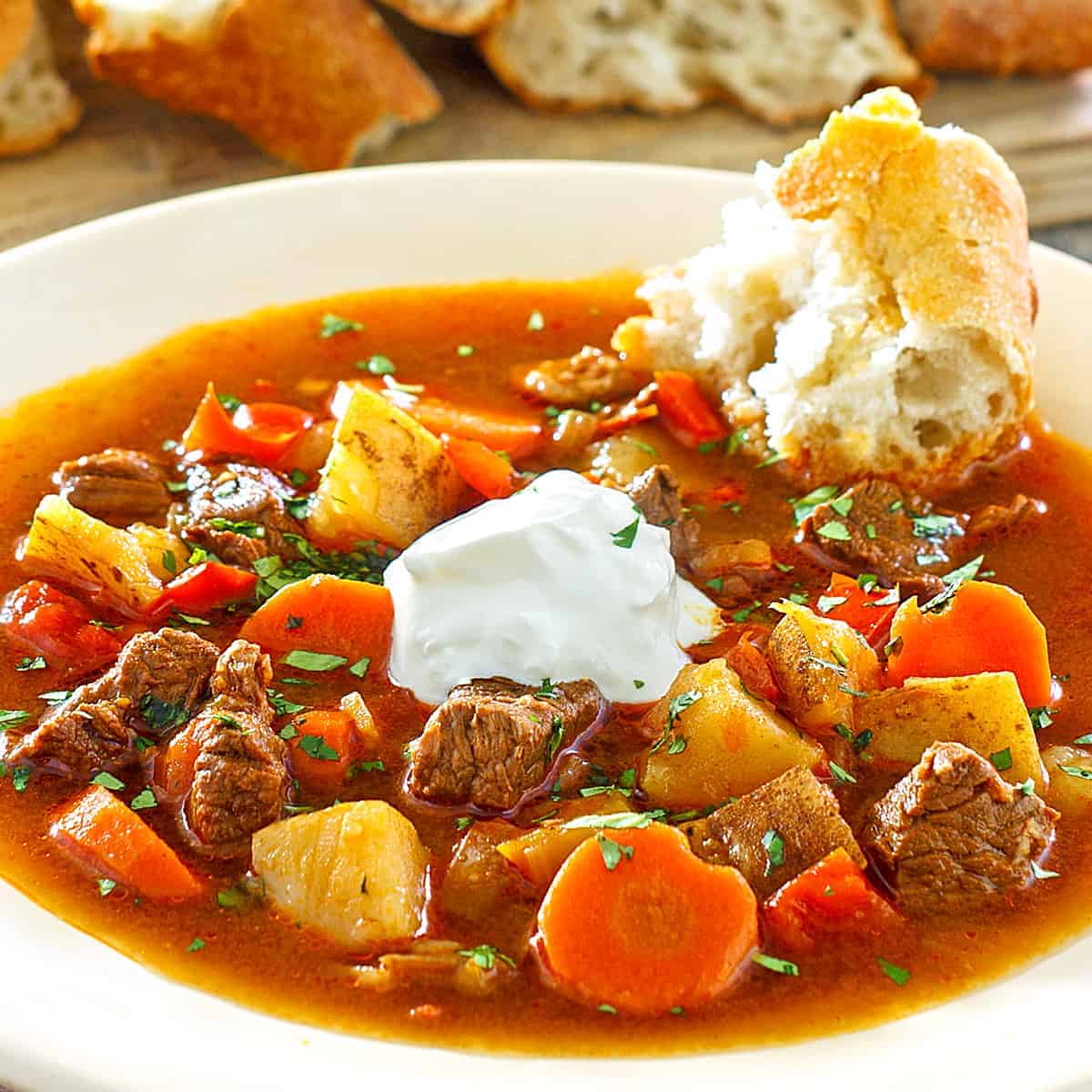 Traditional Hungarian goulash is a prime example of how a few simple ingredients, cooked properly, can yield an incredible flavor.  Though many variations of Hungarian goulash exist, and every cook makes it just a bit differently, this is an authentic recipe from the heart of Hungary.

Hungary holds a special place in my heart and in my family’s hearts.  My brother lived there for 2 years as a young man, regularly wrote home to us about his experiences there, the beautiful scenery and architecture, and his love for the Hungarian people.  When I visited Budapest I immediately fell in love with it.  Its name comes from the two sides of the city (Buda and Pest) separated by the Danube River running through it.   With its striking chain bridge, stunning parliament building, and its incredible Buda Castle, Budapest is a breathtaking city.

Hungary’s history has been one of hardship and heartbreak.  But the passion and stamina of soul has remained in the hearts of the Hungarian people.

I’ve always been touched by Hungary’s national anthem, Himnusz, or “hymn”, written by the poet Kölcsey.  Their anthem is a poetic prayer and unlike most anthems that focus on an expression of national pride, the Hungarian anthem is a direct, heartfelt plea to God.  In the mid-20th century, during the years of strongest communist rule in Hungary, the words were not sung, only the music was played.  The communist government asked two of the most acclaimed artists of that time, a poet and composer, to rewrite the national anthem.  Both refused.  The next communist leader also tried, unsuccessfully, to have it changed.  Hungary’s national anthem remains Himnusz.  The first three lines:

O God, bless the nation of Hungary
With your grace and bounty
Extend over it your guarding arm 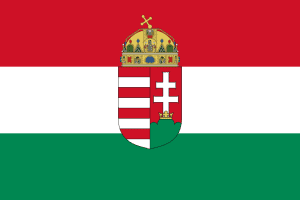 I also love Hungarian food.  Their breads and smoked sausages are fantastic as are their meats, stews, sauces, and desserts. Today I’m going to share the national dish of Hungary:  Goulash.

What is Hungarian Goulash?

Goulash, or as Hungarians call it, gulyás, means “herdsman.”  Its origins date back to the 9th century Magyar shepherds as a simple meat and onion stew prepared in heavy iron kettles known as bogracs.  In the 15th century invading Ottoman Turks introduced a new spice to Hungary, paprika.  While the rest of Europe remained lukewarm towards this red chili pepper from the New World, Hungary embraced it and paprika has since become a defining element of Hungarian cuisine.

Goulash is kind of in between a soup and a stew.  Unlike some stews, Goulash is not overly packed full of beef and vegetables, it is a little more brothy.  But through the cooking process, the broth becomes thicker and more like a rich sauce.

And no, contrary to popular belief here in the U.S., goulash is NOT made with ground beef or (heaven forbid) macaroni noodles! 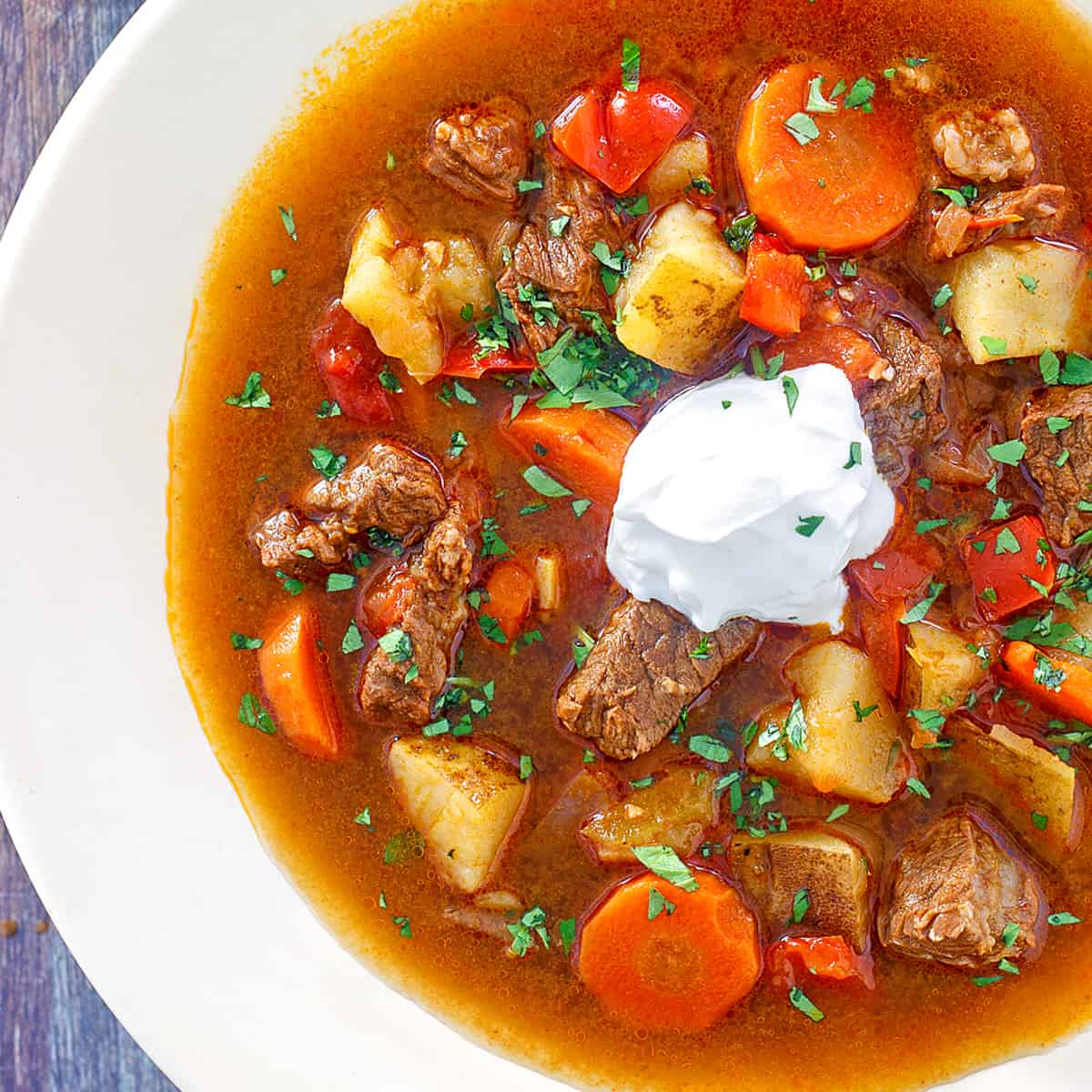 To achieve the ultimate flavor, the cooking method is important and quality, real Hungarian paprika is essential.  And lots of it!  None of this “2 teaspoons of paprika” jazz.  Hungarians use very generous amounts of paprika, and that’s key.  A Hungarian once told me, “however much paprika the recipe calls for – at least double or triple it!”

For this size batch of Goulash, you want to use a full 1/4 cup of it.  When I  lived in Germany, Hungary was just a few hours away and I would stock up on it when I visited.  Now I order it online and recommend this genuine imported Hungarian paprika imported from Hungary.  There is no comparison in flavor.  It has an extraordinarily rich flavor and an exceptionally vibrant red color.  Many of our readers have tried it and agree that quality Hungarian-imported paprika makes all the difference.

I mentioned earlier, many variations of goulash exist.  Some include turnip or wine or caraway seeds, to name a few.  But this recipe is a very old, very traditional way of making Goulash that my brother and I learned from older generations of Hungarian women and it needs no embellishments.  It’s simple and simply delicious! 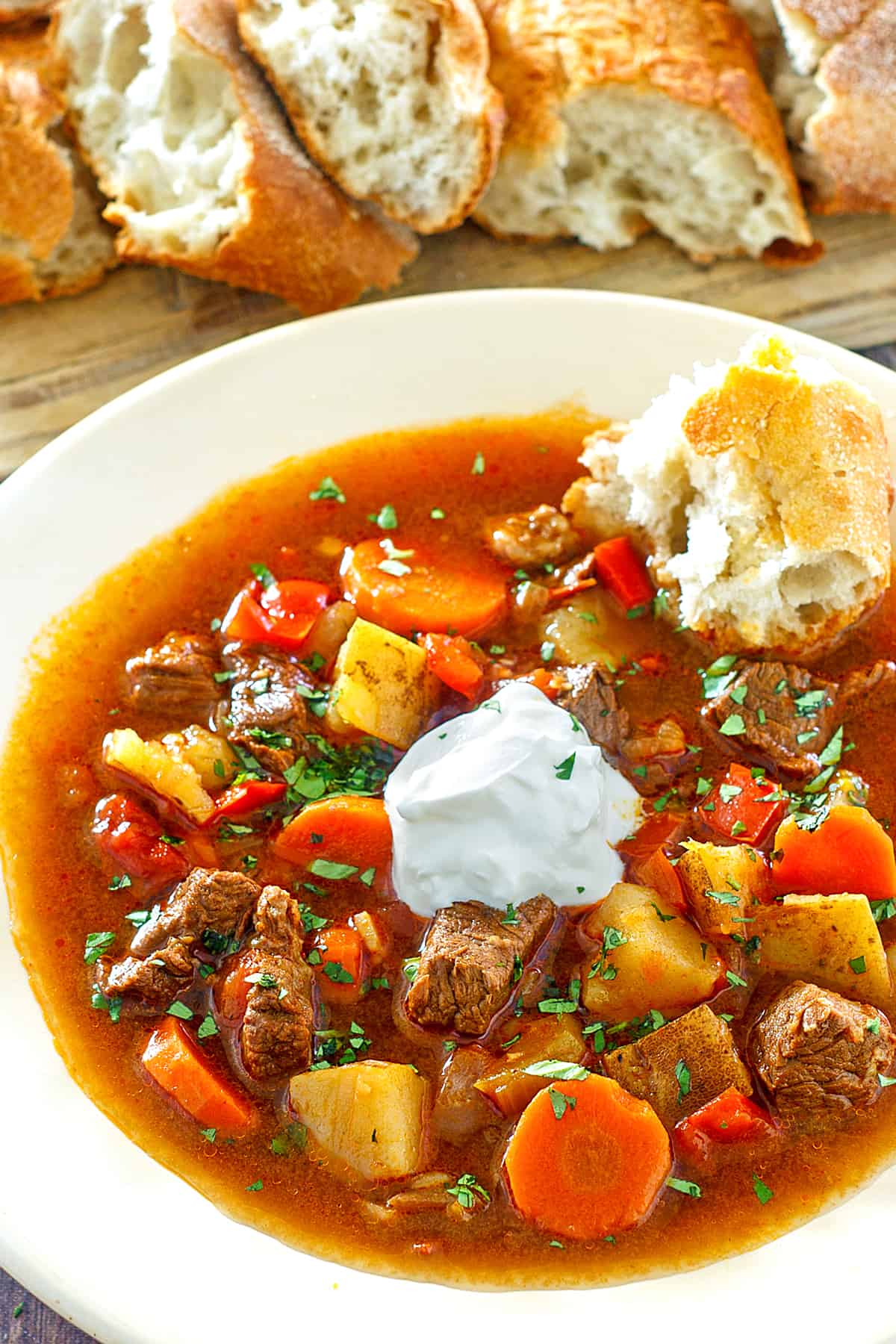 Add the bell peppers and garlic and cook for another 6-8 minutes.  (Note about peppers:  Outside of Hungary it’s very difficult to find the peppers they use there.  The best ones to use in their place are red and some yellow/orange.  Avoid regular green bell peppers as they have a starkly different flavor profile.) 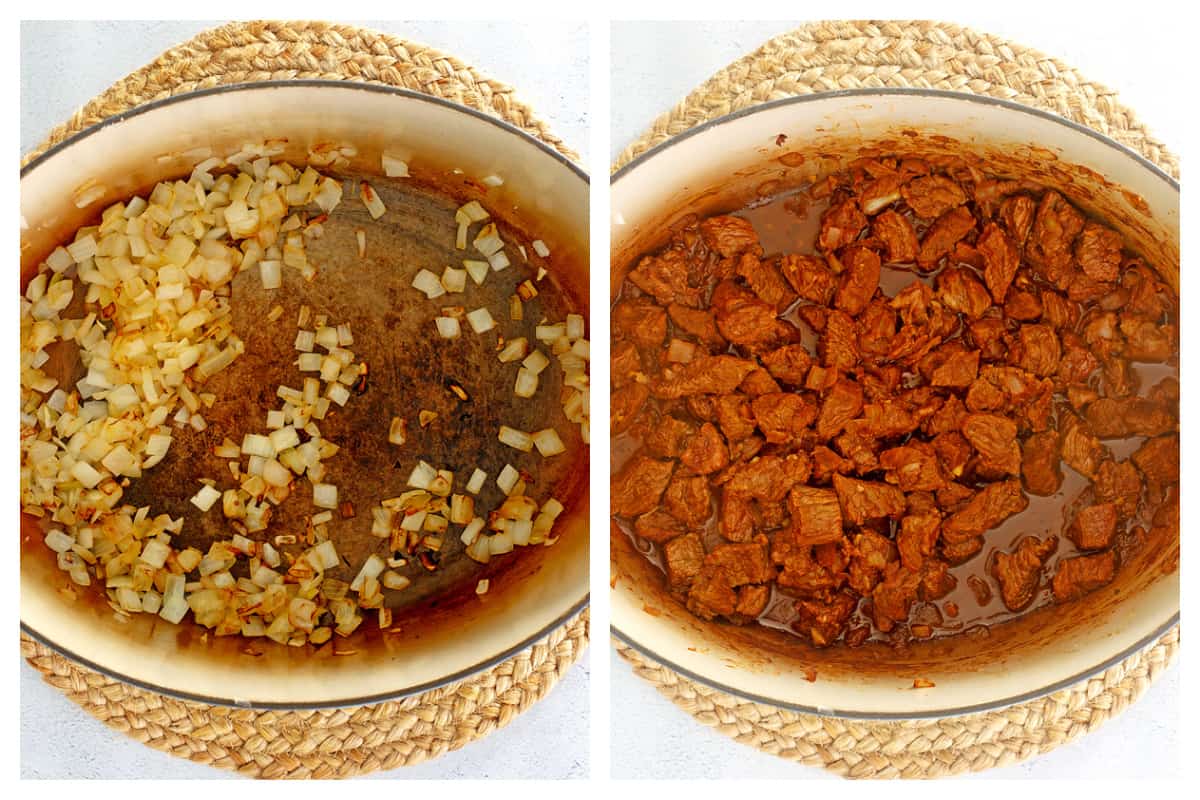 Serve with some crusty bread and, if desired, a dollop of sour cream. 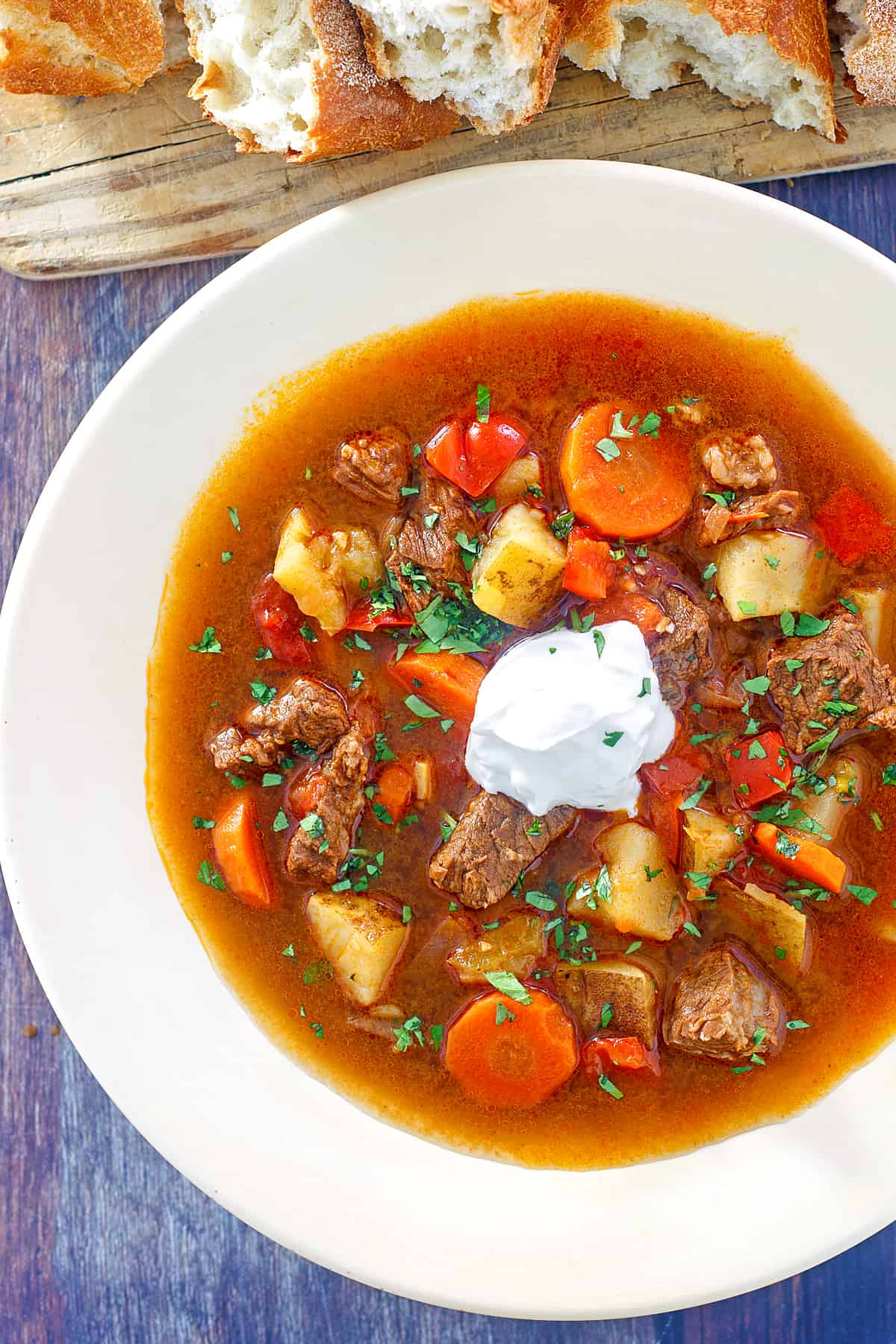 For more authentic Hungarian dishes, be sure to try our:

Originally published on The Daring Gourmet on March 18, 2014 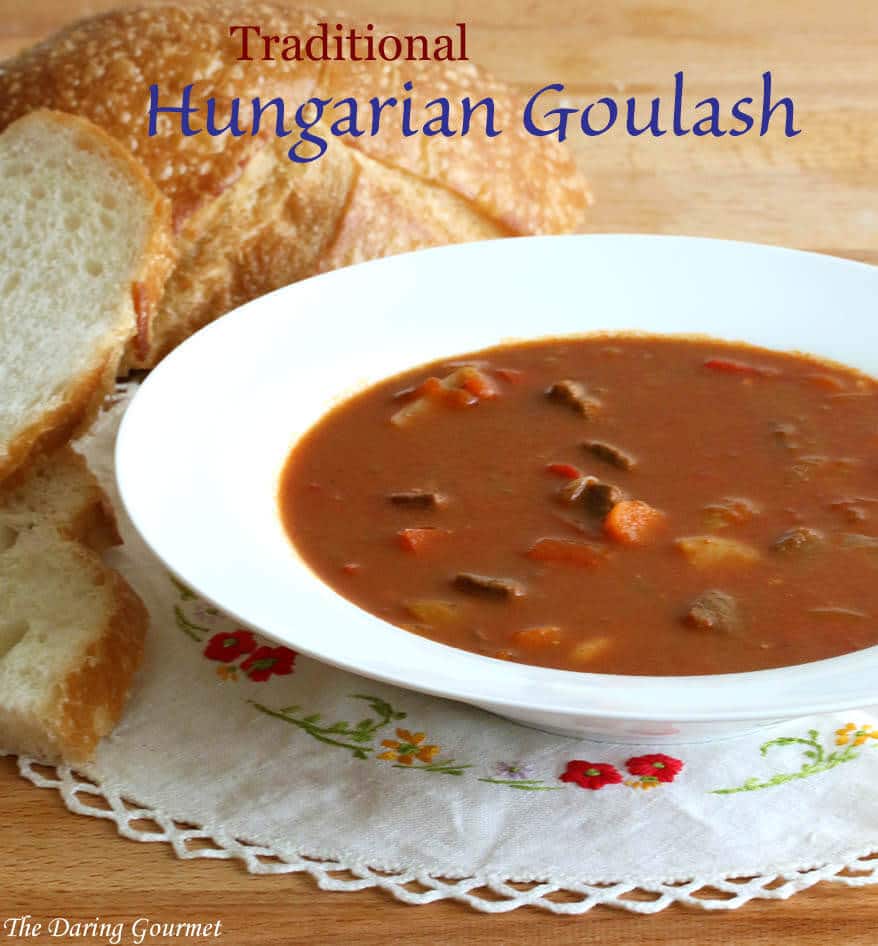