Thank you to the J.M. Smucker Company for sponsoring this post! 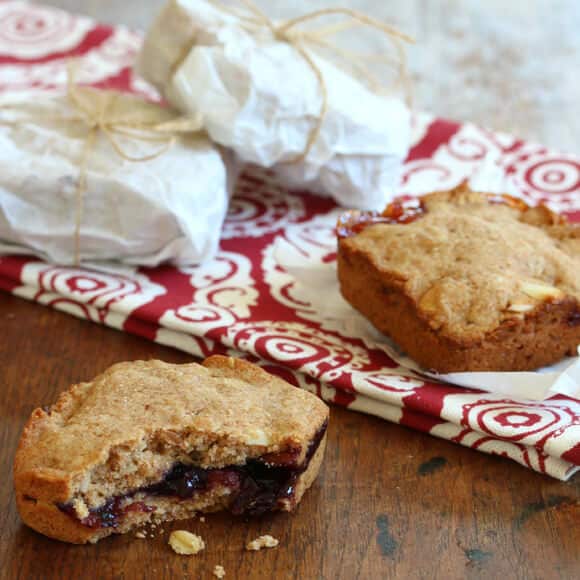 Last week I posted the recipe for my Lemon Millet Fig Cake with Walnuts and Candied Ginger and mentioned that I was planning on making some fruit bars next.  I like homemade fruit bars and wanted to develop a whole grain recipe without refined sugar, something with wholesome ingredients that could serve as a grab-and-go snack or even an impromptu, on-the-road breakfast.

These Whole Grain Almond Fruit Bars fit the bill. Made with 100% whole grain flour, honey and almonds, these fruit bars are a sweet indulgence you can feel good about giving your kids and enjoying yourself without too much guilt! 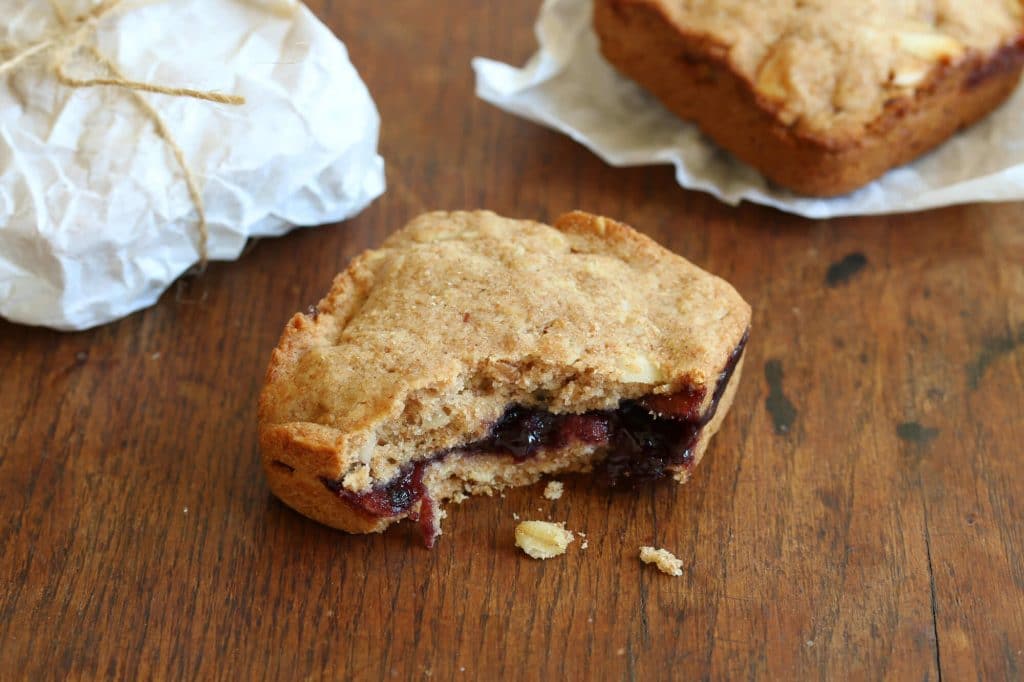 I hadn’t made fruit bars before and what inspired the idea was catching a glimpse of Smucker’s new Fruit & Honey fruit spreads while my kids and I were grocery shopping.  (Here’s a coupon for any Kroger store.)   I always avoid 95% of the jam section in grocery stores because the majority of the products are packed full of high fructose corn syrup.  So I was really pleased to see these new fruit spreads from Smucker’s that are naturally sweetened with honey.

I grabbed all four flavors, eager to try them out, and started thinking about something I could create with them.  I thought about using them in a cream cheese-based frosting or a filling for a baked good.  The later prompted the idea for these fruit bars. 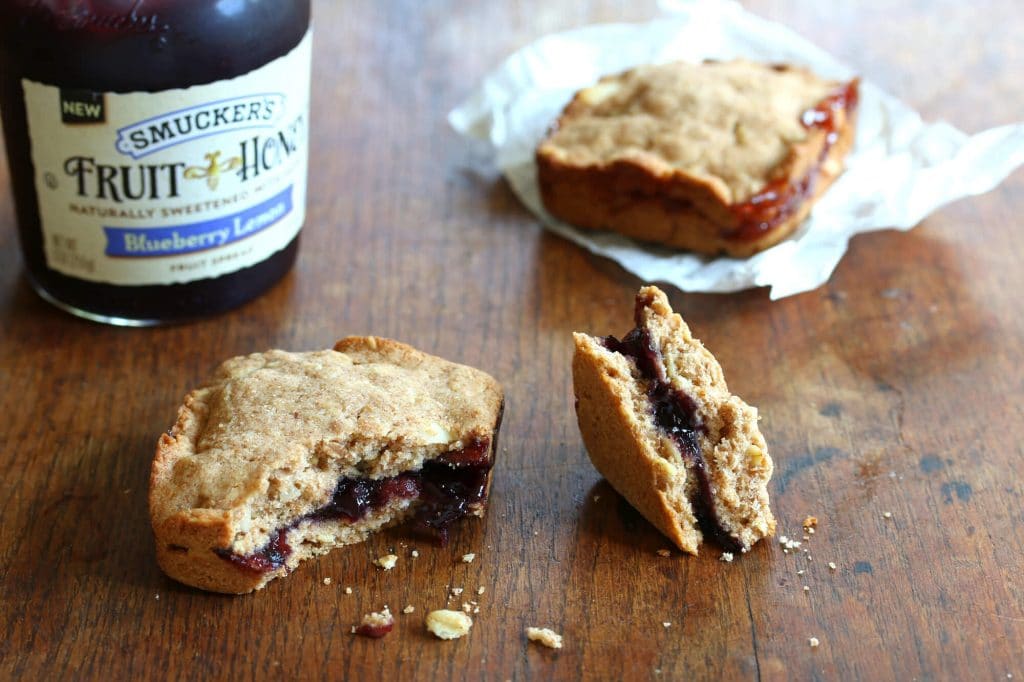 When we got back home my kids excitedly grabbed the new magnifying glasses we had given them the day before and headed to the backyard to inspect grasshoppers and potato bugs.  While they were sharpening their entomology skills outside I went to work in the kitchen.

I opened all four flavors (I wanted to use them all in my fruit bars – I’ll explain later), and they are all excellent.  Not overly sweet, but sweet enough with a nice, vibrant flavors. 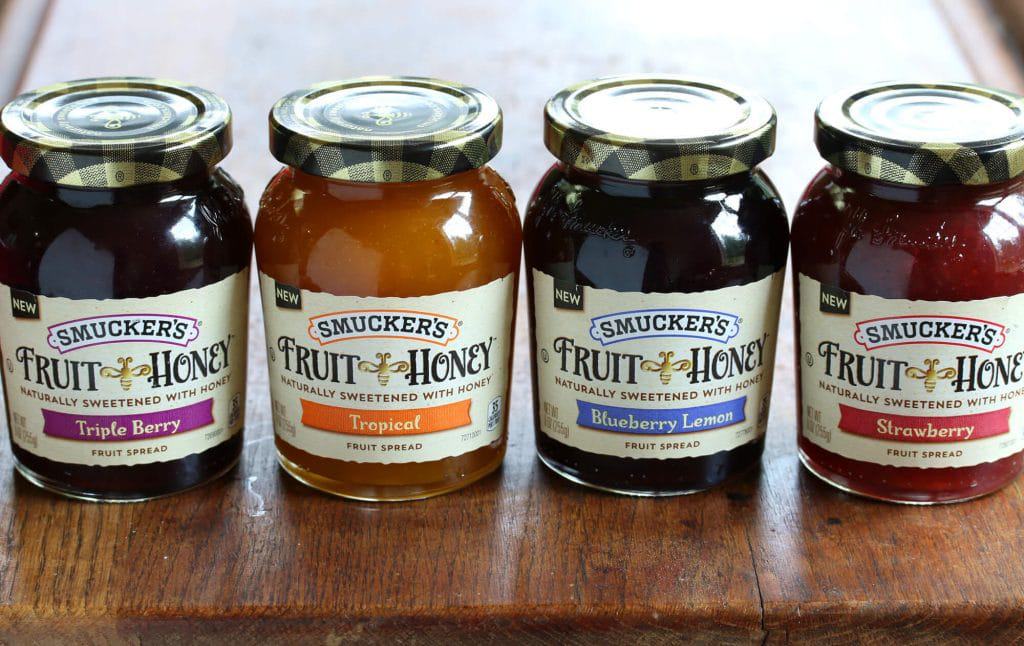 I was excited to experiment with my fruit bars and fill them with these naturally-sweetened fruit spreads.  The fruit bars were done baking just as my kids came in from a satisfying session of bug hunting and they walked into a kitchen filled with the wonderful aroma of almonds and cinnamon.  Can you guess what they requested?  You got it.  And I was more than eager to let them indulge in these wholesome treats! 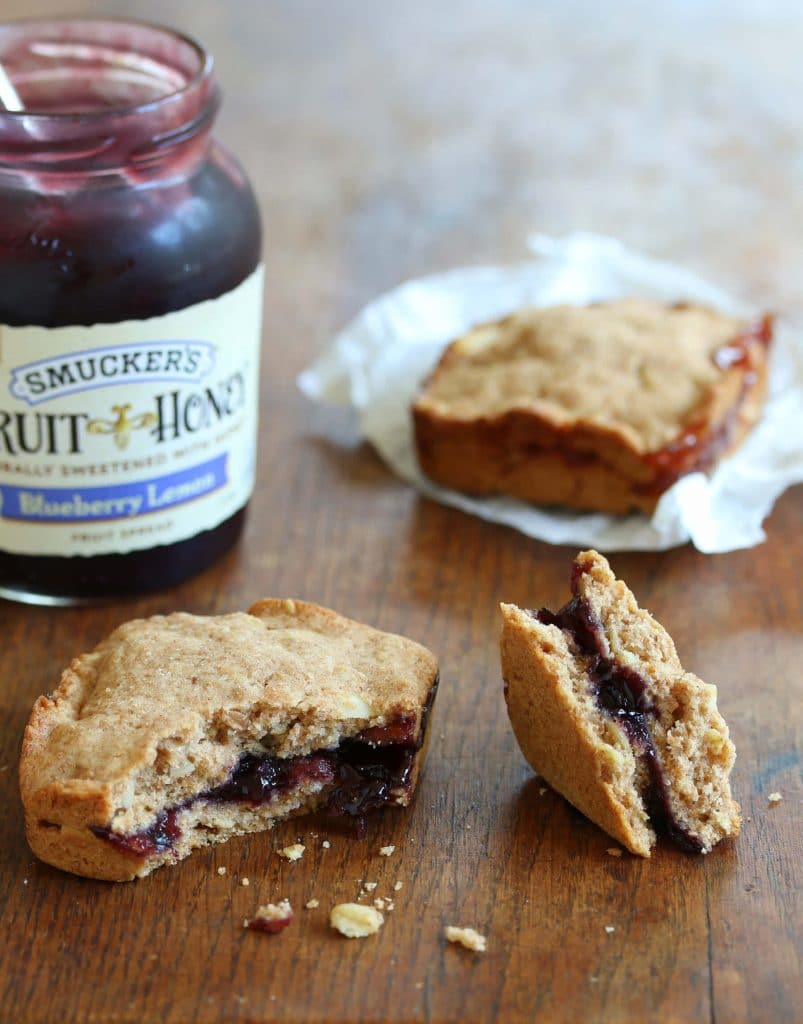 Something that made this recipe especially fun was getting to experiment with the other item that arrived in the mail with our kids’ magnifying glasses – my new Wilton Non-stick Square Treat Cake Pan. 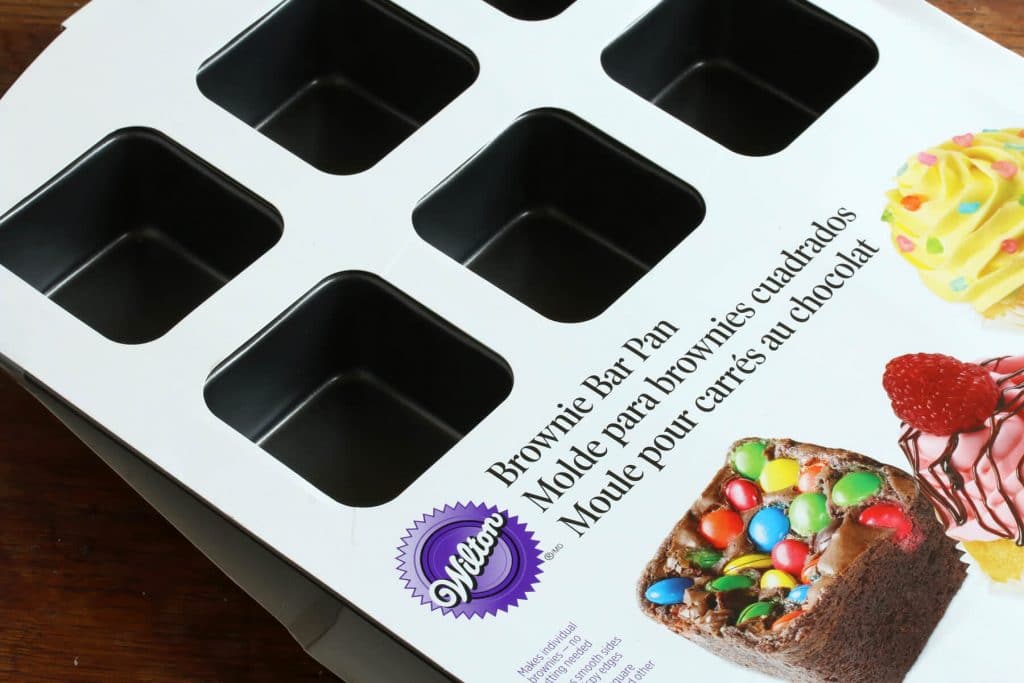 I envisioned perfectly shaped, individual fruit bars that were easy to grab and go and I was very happy with the results.  One of the things I really like about Wilton’s Square Treat Pan was that it enabled me to use different fillings in each bar for a nice variety.  I really love my new pan and look forward to using it again and again.

NOTE:  I’m using this pan for this recipe but you can use a regular 8×8 square baking pan instead. 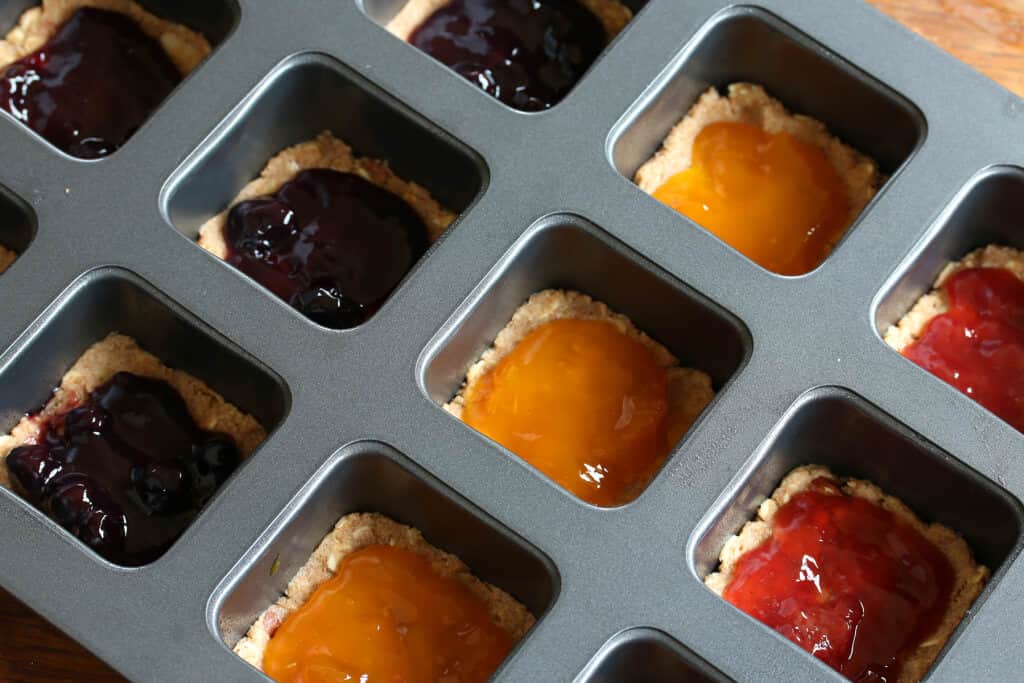 Cream the butter with a mixer until pale and fluffy. 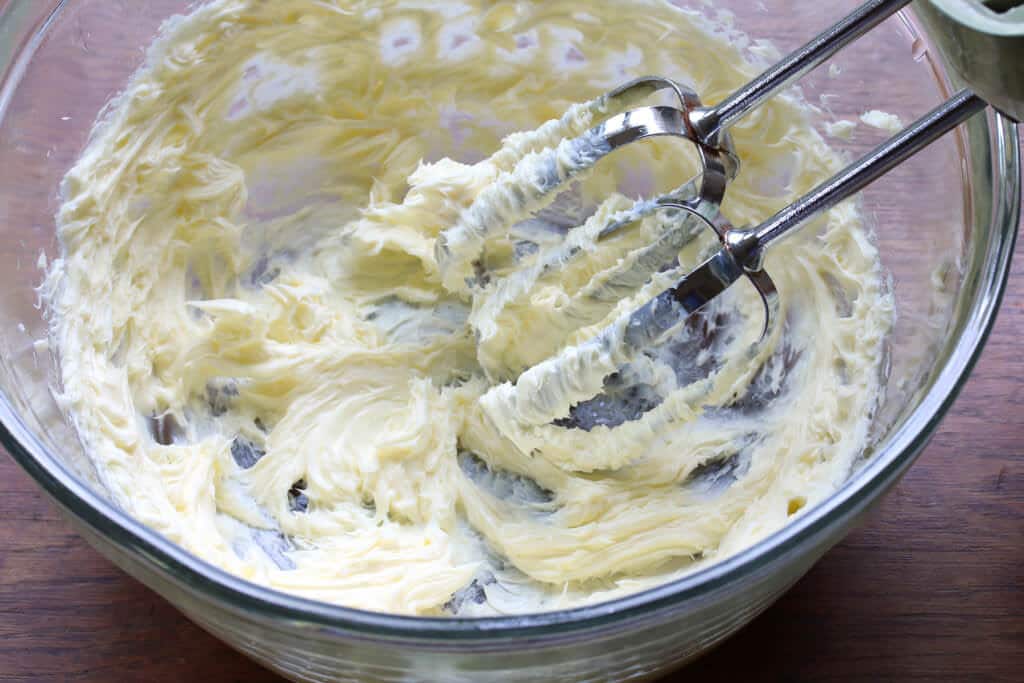 Add the honey, egg, almond and vanilla extracts and beat until combined. 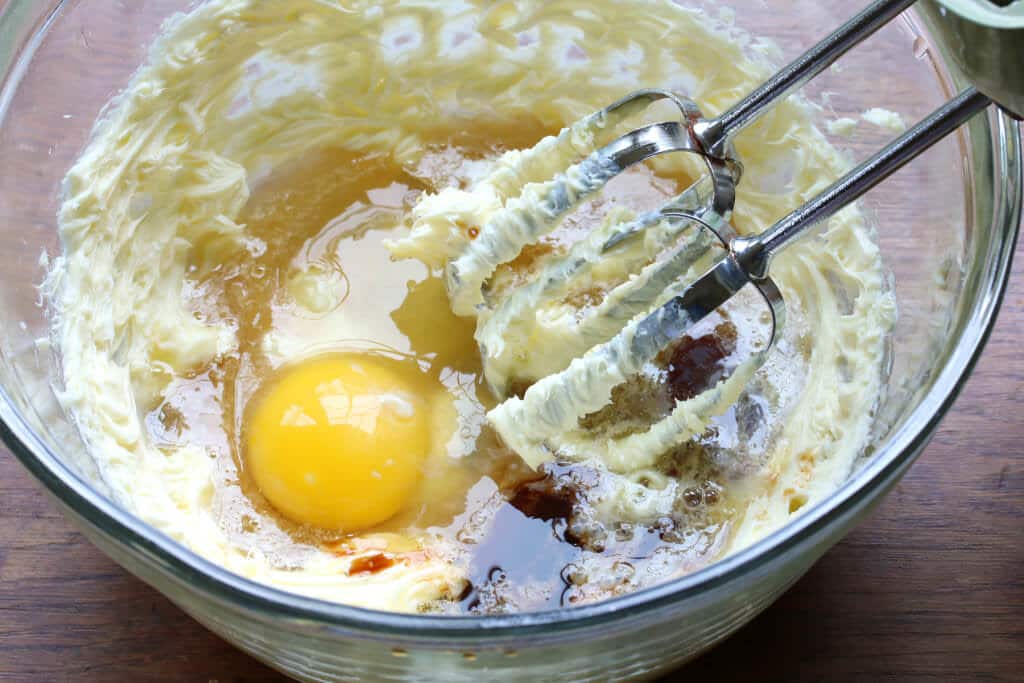 In a separate bowl, combine the flour, salt, baking powder and cinnamon. 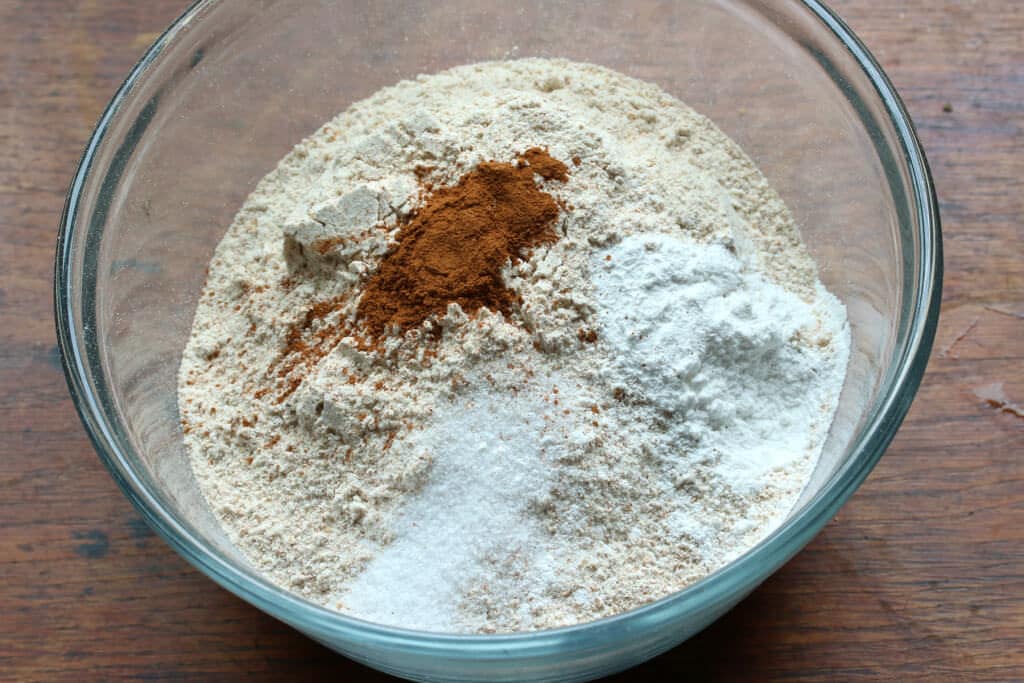 Add the flour mixture to the wet mixture and stir to combine. 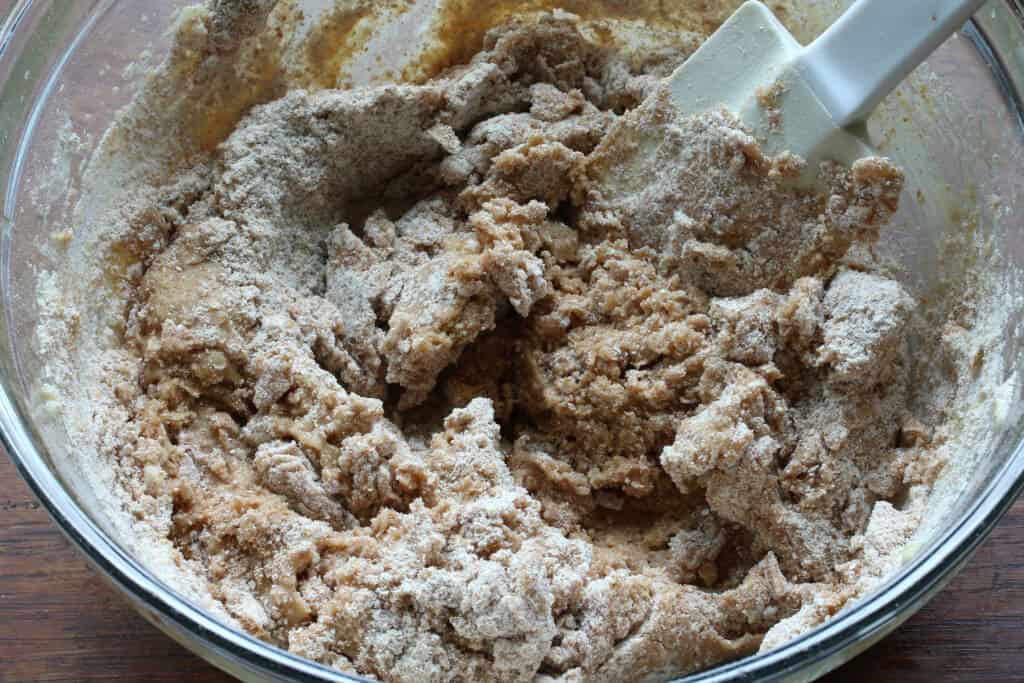 A thick but soft dough will form. 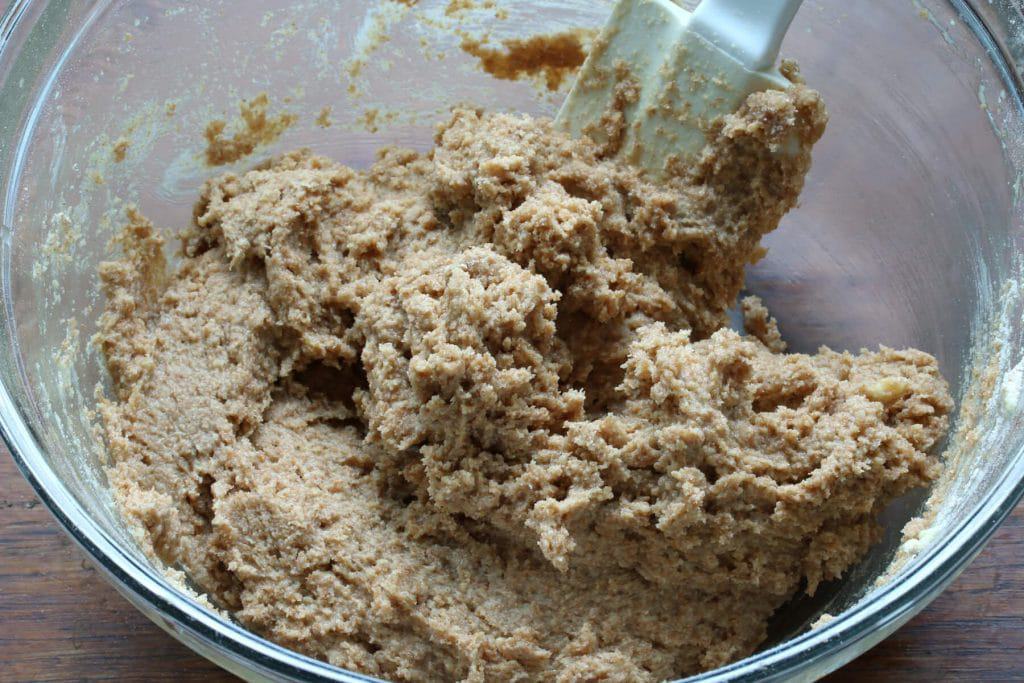 Stir in the almonds and oats. 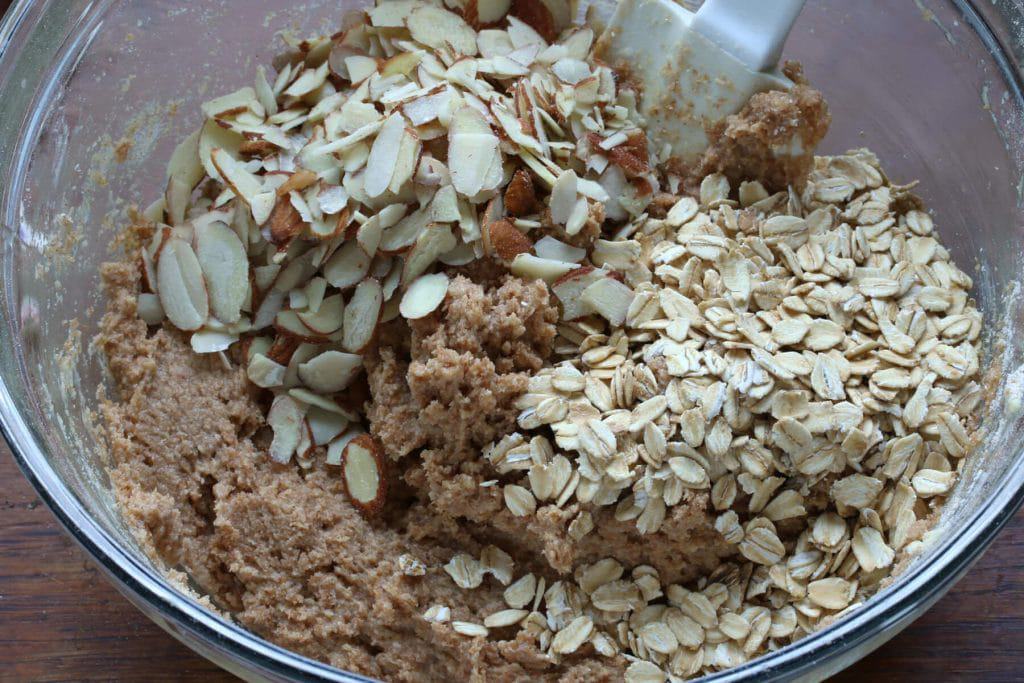 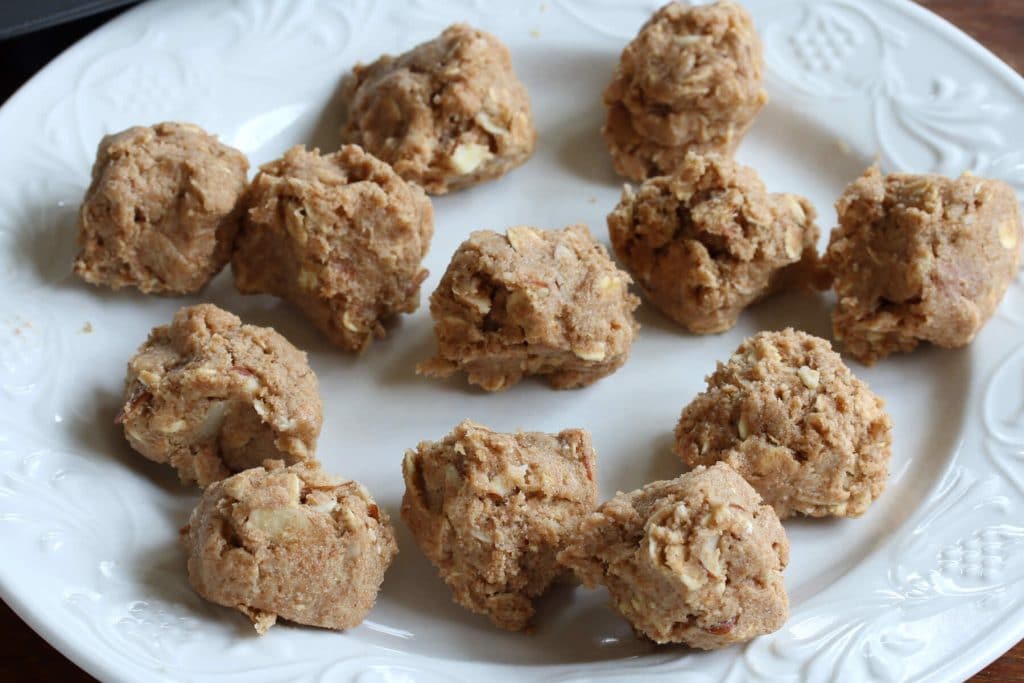 Grease the pan.  Press each dough ball into the bottom of the squares. 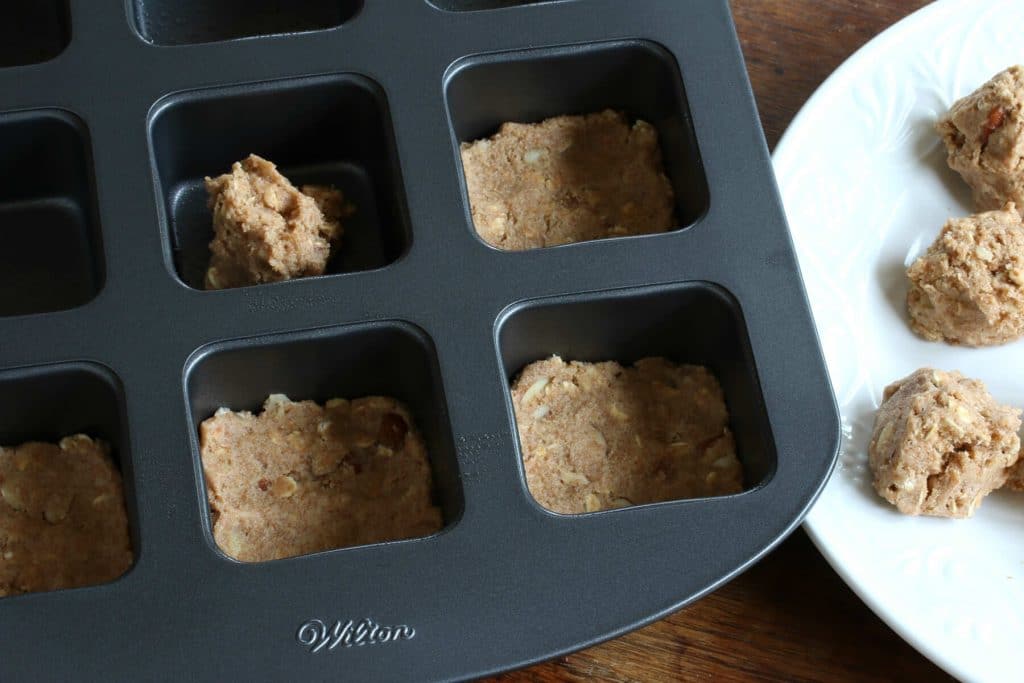 Spread some jam onto the dough, leaving some space at the edges so the jam doesn’t all flow out. 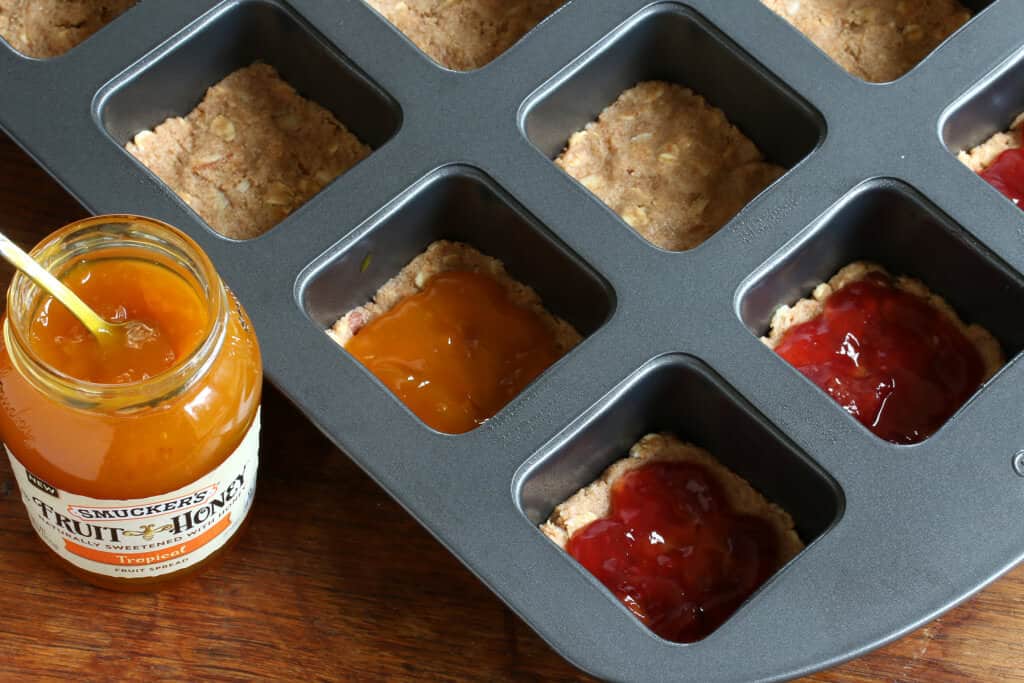 Doesn’t this look awesome?  LOVE my new pan, so perfect for these squares!

Flatten the other half of the dough balls in the palms of your hands and lay them on top of the jam. 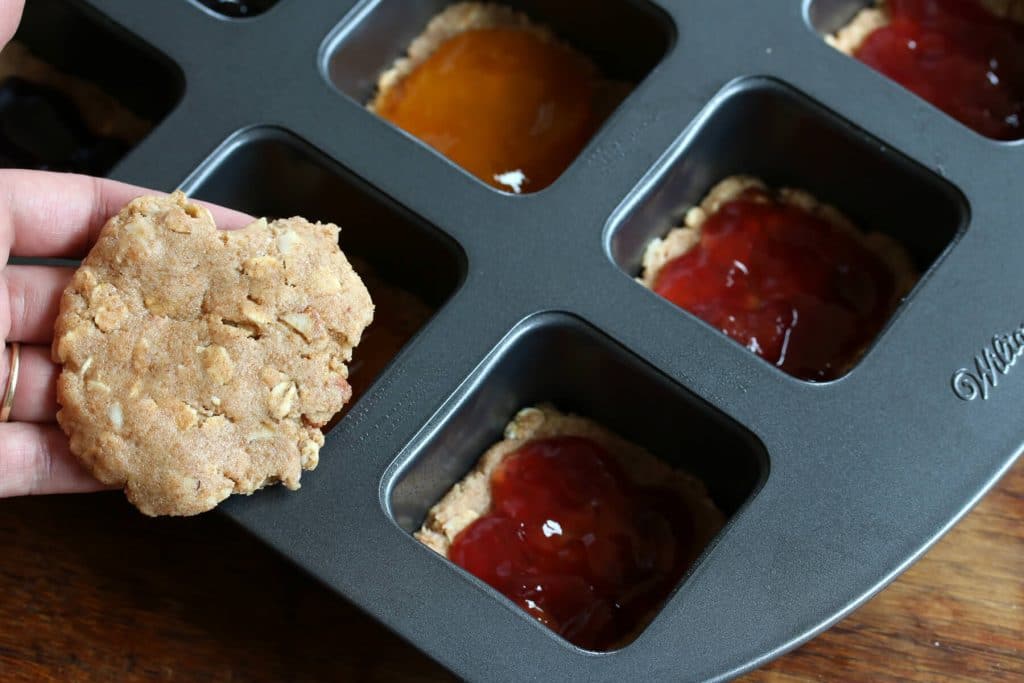 Gently press the dough down around the edges.  Be careful not to press to hard or the jam will squirt up. 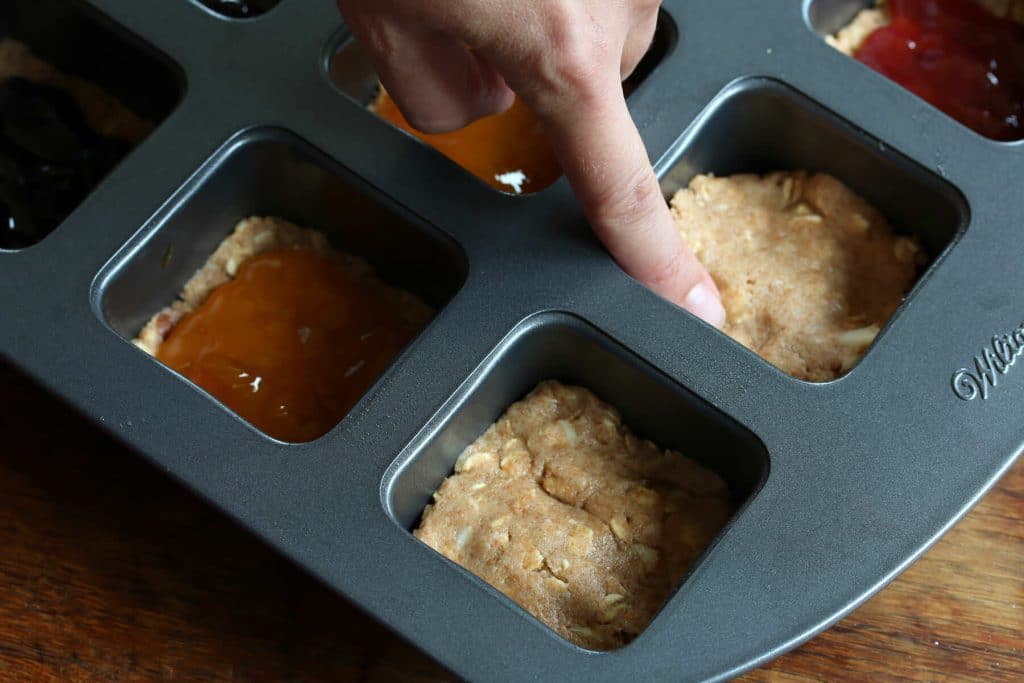 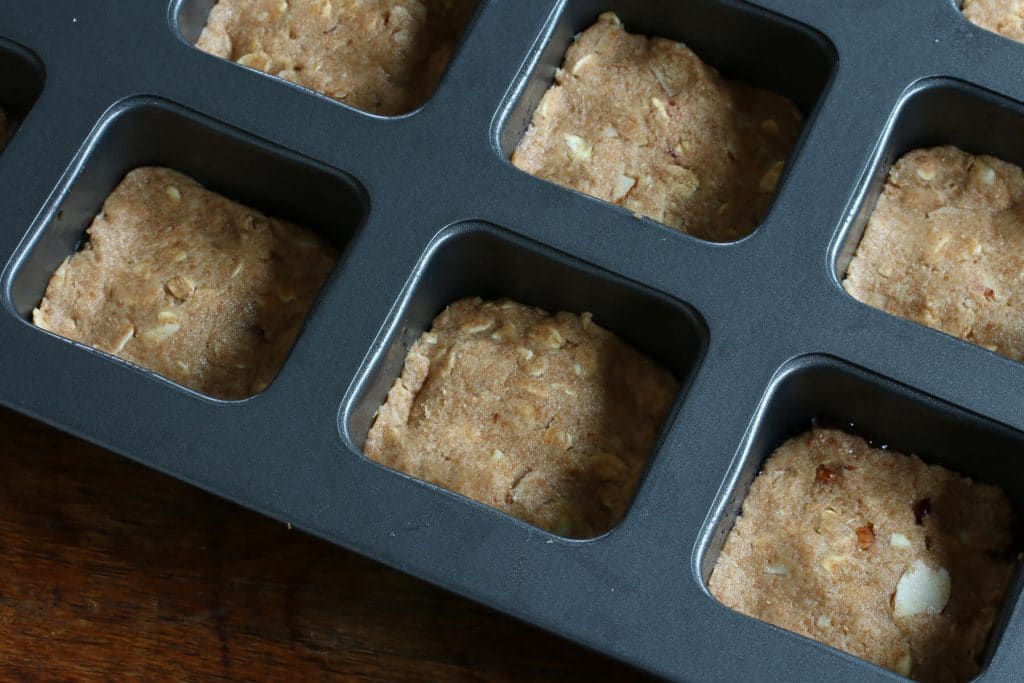 Preheat the oven to 350 degrees F and bake for 18-20 minutes or until the edges are just barely beginning to turn golden.  Let the squares sit in the pan for 10 minutes before removing. 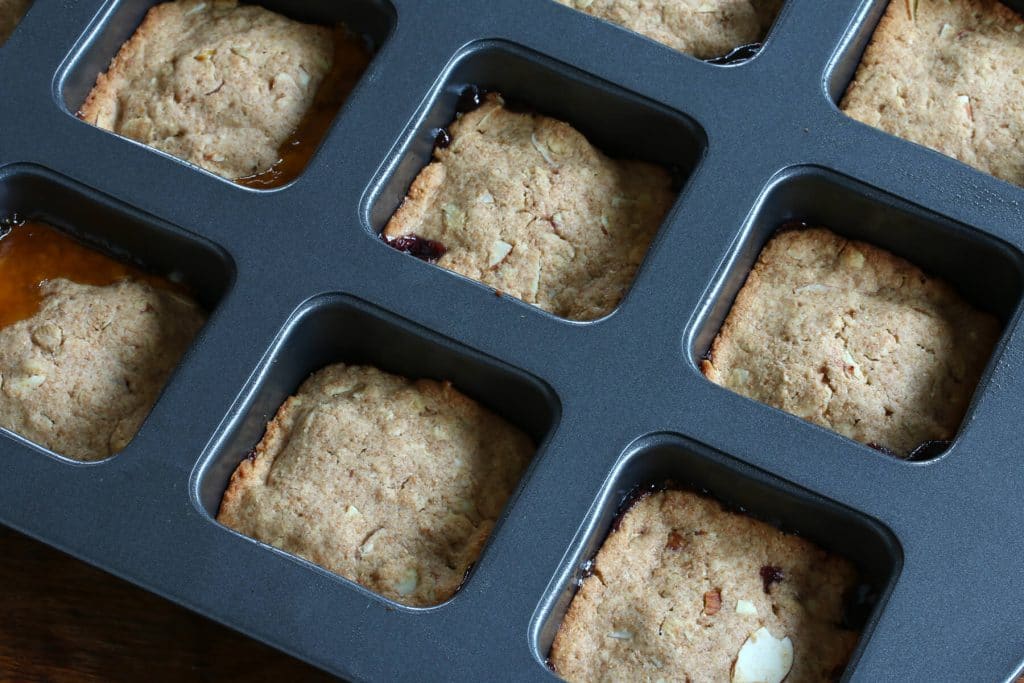 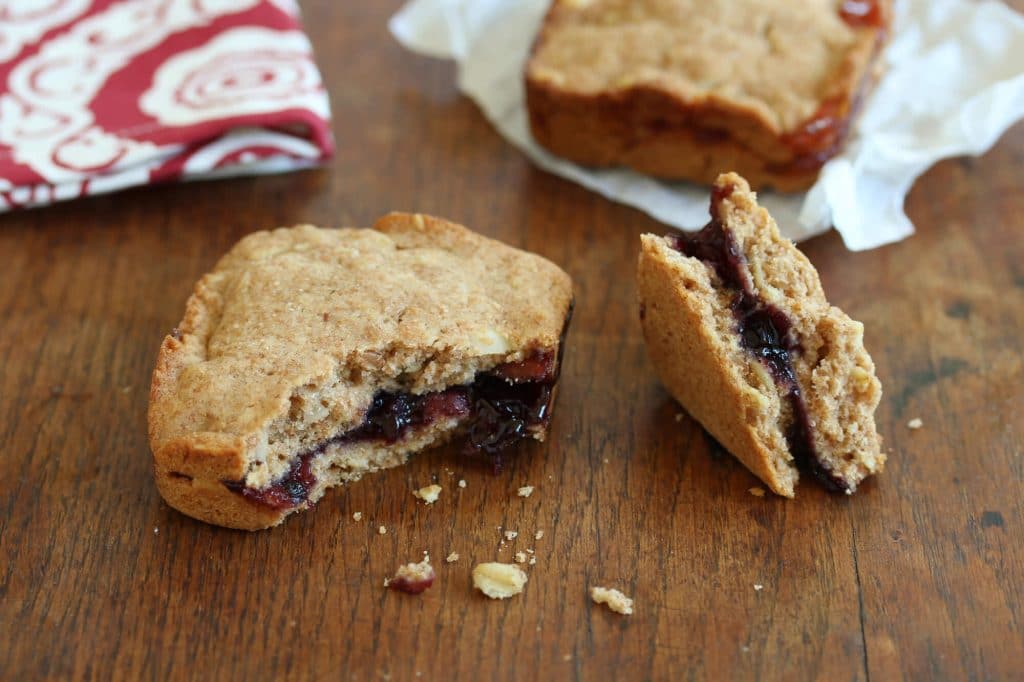 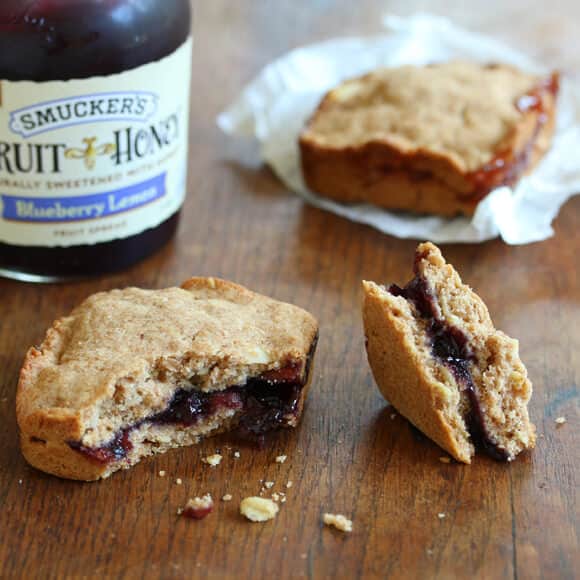 Enjoy with a glass of milk or on their own!

Print
Prep time
10 mins
Cook time
18 mins
Total time
28 mins
: Kimberly Killebrew
Serves: 12 bars
Ingredients
Instructions
Notes
If using an 8x8 inch square baking pan, press half of the dough onto the bottom, spread the jam over, then gently press the other half of the dough on top. Bake as directed. Let the bars cool and then cut into squares.
3.5.3240 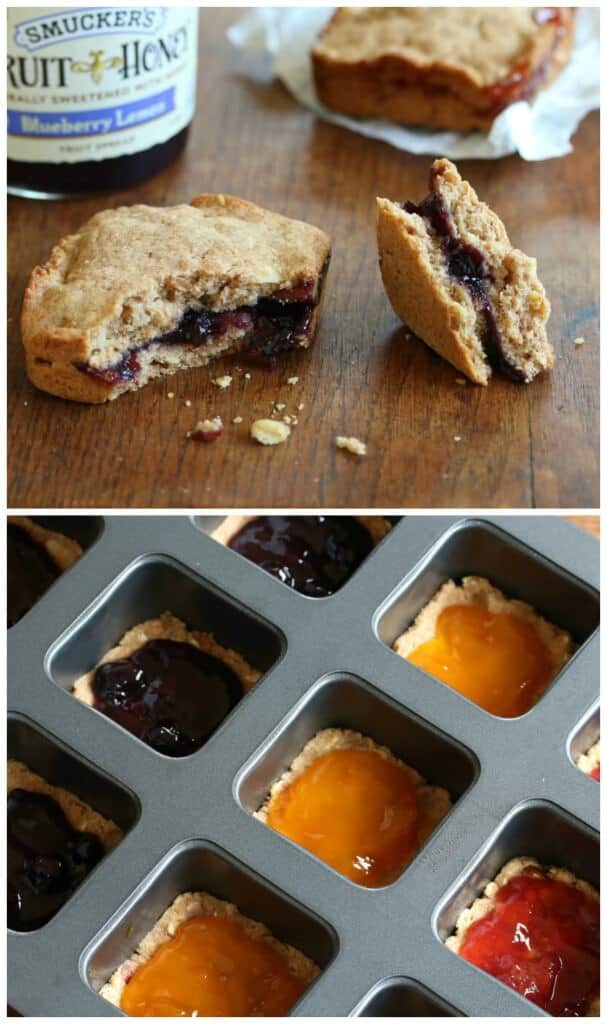 This is a sponsored conversation written by me on behalf of The J.M. Smucker Company®. As always, all opinions are entirely my own.

112 shares
« Peter Piper’s Pickled Peppers
Family Visit To Sonoma County: What To See & Where To Stay »