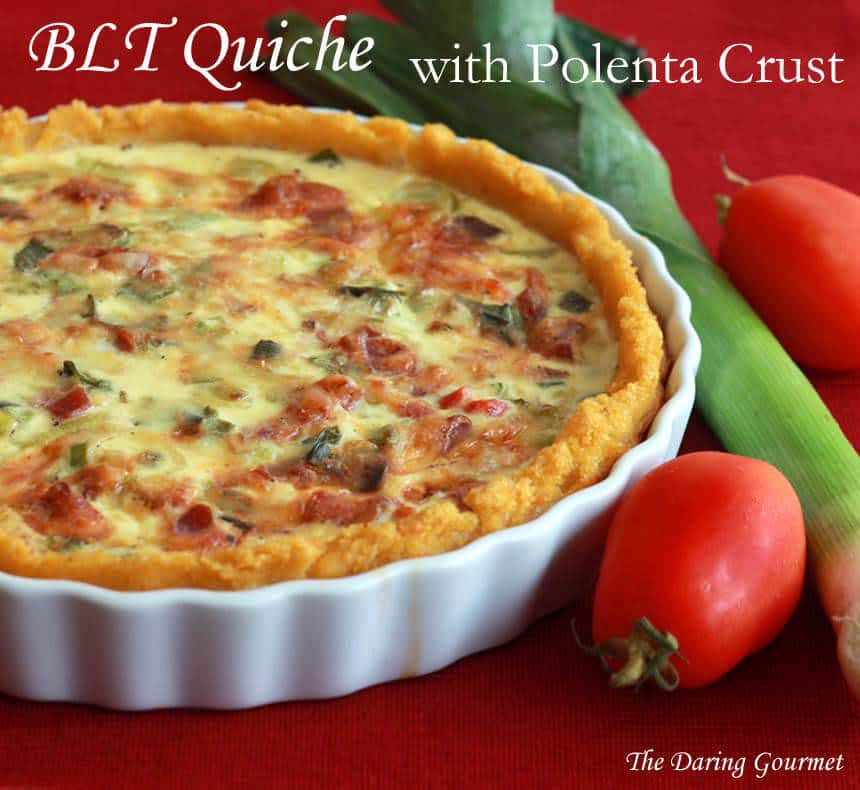 Here’s what happened.   I had leek that needed to be used, a bag of gorgeous tomatoes from a friend’s garden, and an open package of bacon.  And I wanted quiche.  A savory, buttery, leeky, tomatoey, bacony quiche.  But I wasn’t in the mood to make the crust.  Can you relate?  You want pie but you just dread the thought of having to make the crust?  Yeah, that’s the kind of mood I was in.  A crust-less mood.  You know the kind.  But still, I wanted quiche.  And I’m almost always the kind of girl who likes to have her way.

And thus this BLT Polenta Quiche was born.

That’s where the idea of whipping up a polenta crust came into play.  No cutting in cold pieces of butter with flour, adding ice water, kneading it into a dough, forming it into a ball, refrigerating it for goodness knows how long, rolling it out, pressing it in…etc, etc.  And it wasn’t even about the time.  I just didn’t want to bother with making crust.  So no, none of that.  Just a simple boil-the-water-add-the-polenta-stir-until-cooked-press-in-quiche-pan-and-bake.  Yes, I was liking the sound of that.  Plus, it’s something different than the day-in/day-out flour crust.  Score.

To save time, I roasted the tomatoes and cooked the bacon together in the oven.  Those cooked while I prepared the polenta and chopped the leek.  Perfect.

The resulting polenta-crusted quiche was delightful and a nice change from the norm.  Next time I’m going to experiment with a kind of Mexican polenta-crusted quiche.  I’m thinking something with smoky chipotles (maybe added to the actual polenta) with melted queso fresco…hmm, I’m liking the the sound of that, too.  But I digress.  Today we’re having Bacon, Leek and Roasted Tomato Quiche with Polenta Crust!

Oh, and for those of you who eat gluten-free, this is definitely for you, too!

So let’s get started! 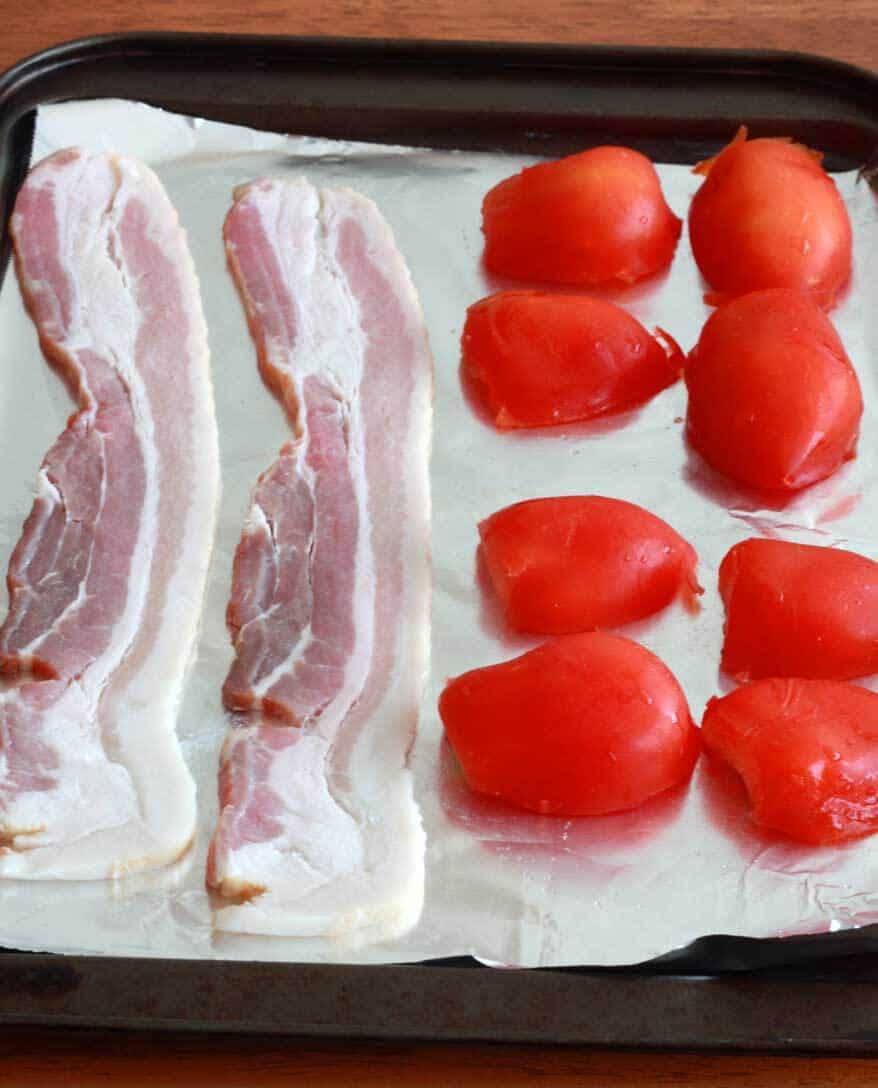 Once cool enough to handle, roughly chop the tomatoes and break the bacon into small pieces. 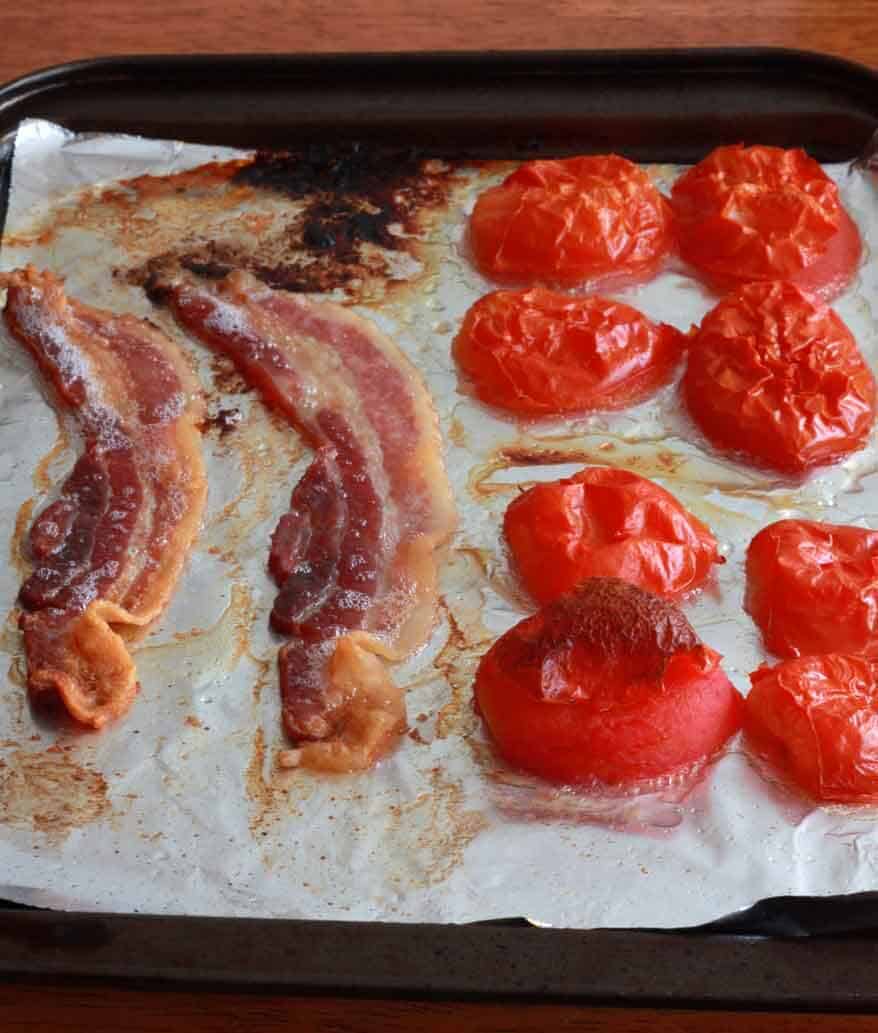 Prepare the polenta (see instructions in the recipe box below).  Use medium- or coarsely-ground cornmeal. 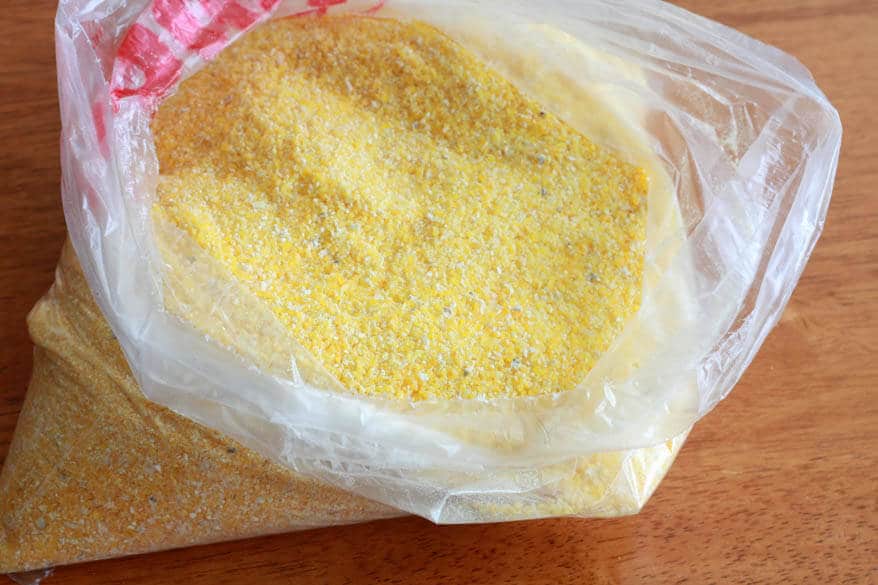 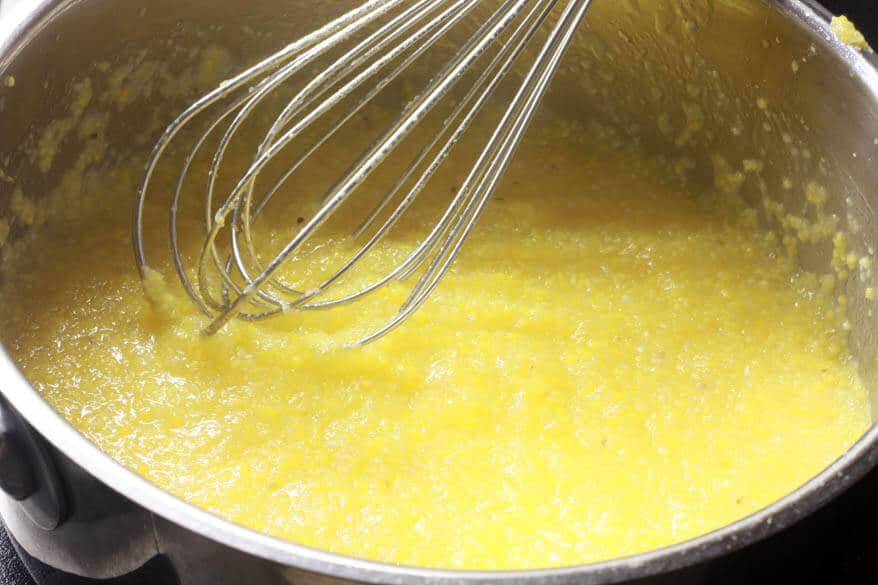 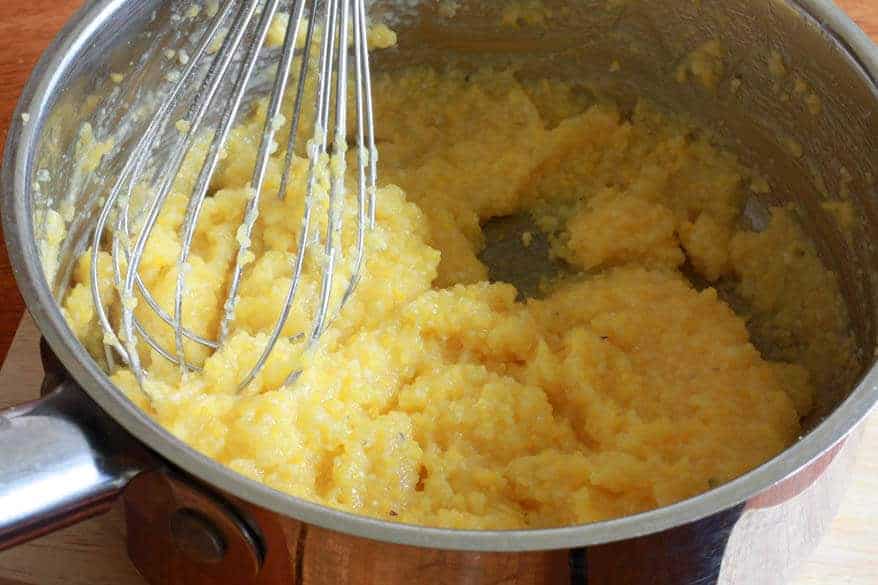 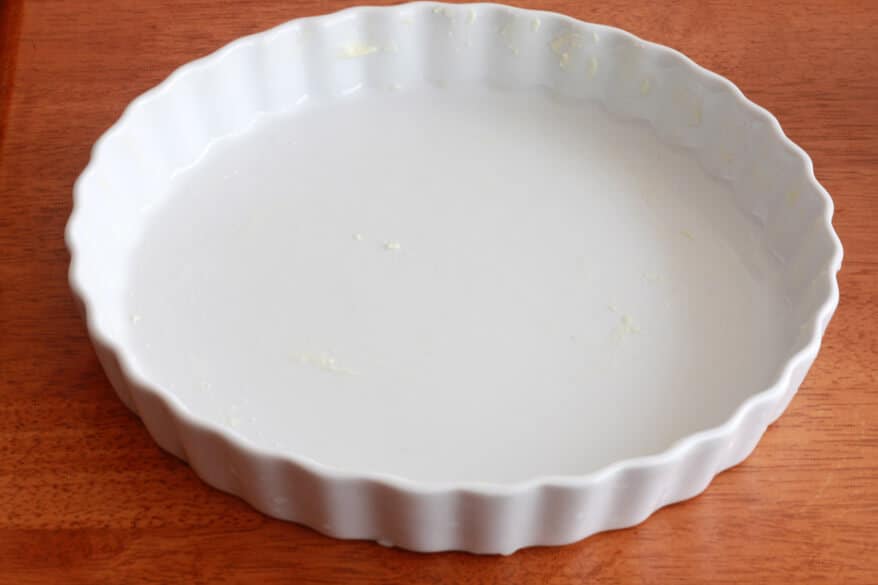 Press the polenta mixture into the quiche dish and up the sides. 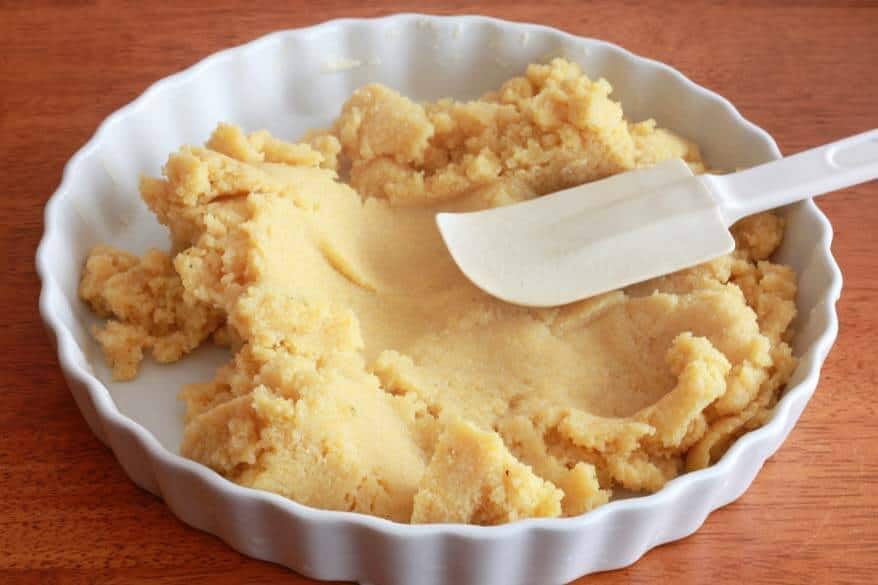 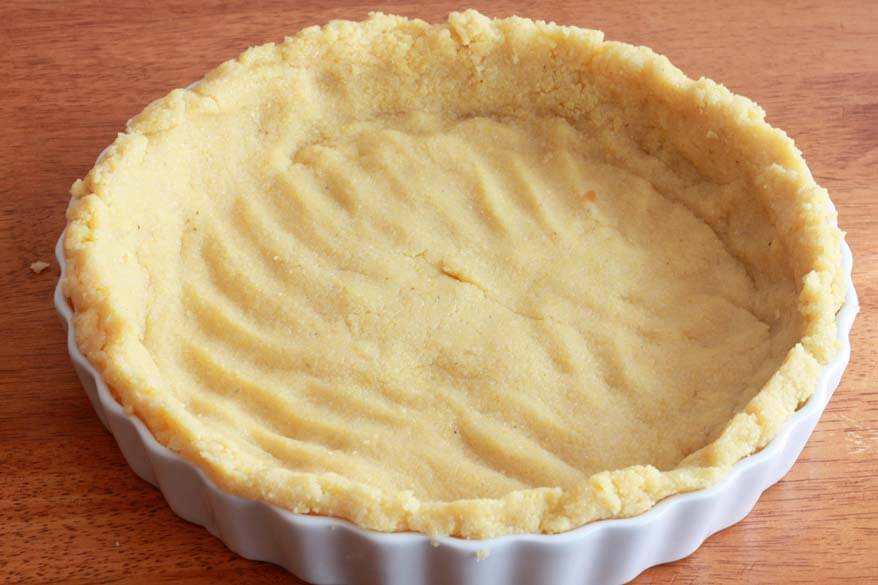 Bake in a preheated oven at 400 degrees F for 15-20 minutes until the edges are slightly crispy.  Allow the crust to cool. 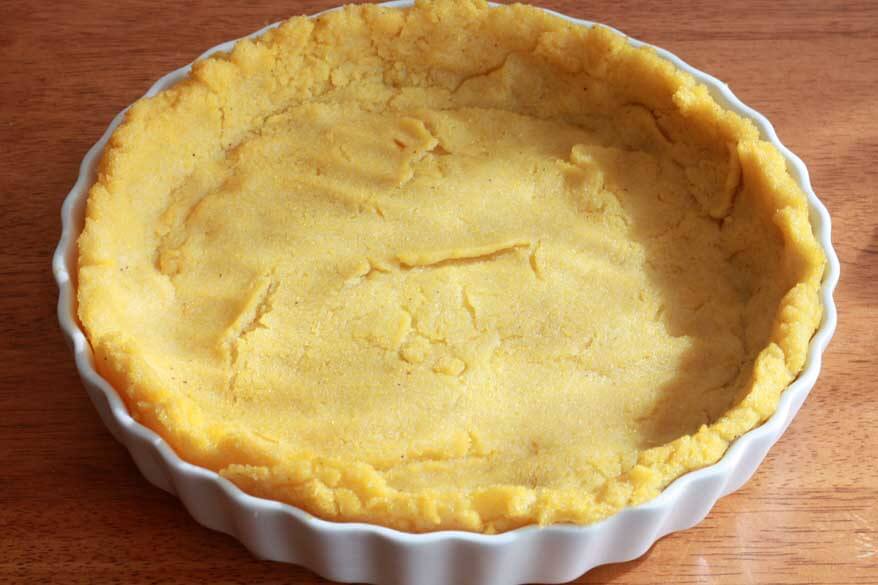 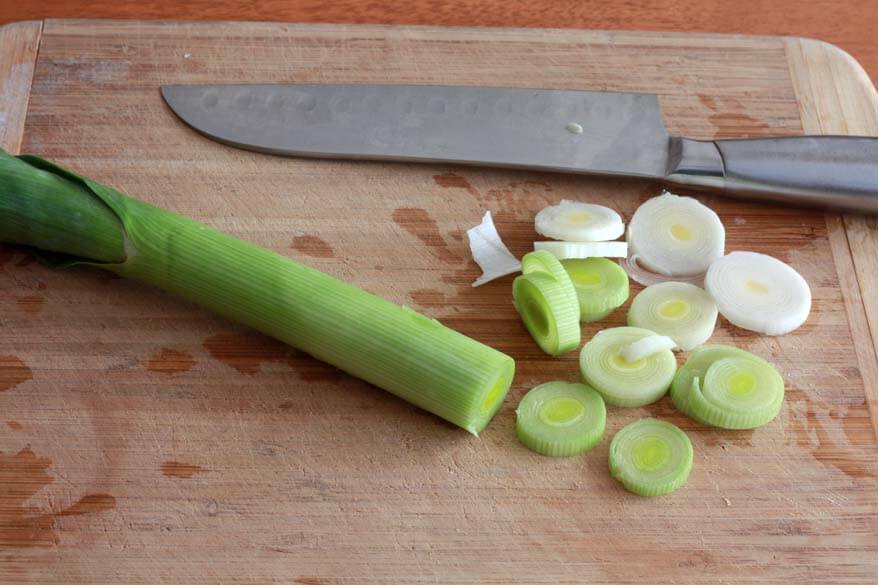 Melt the butter in a skillet and saute the leek until softened. 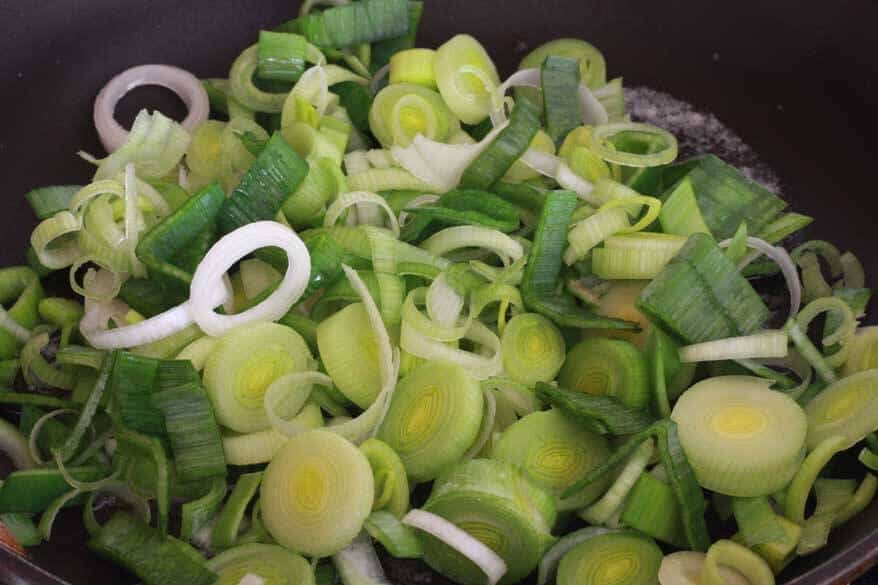 Place the eggs in a medium mixing bowl. 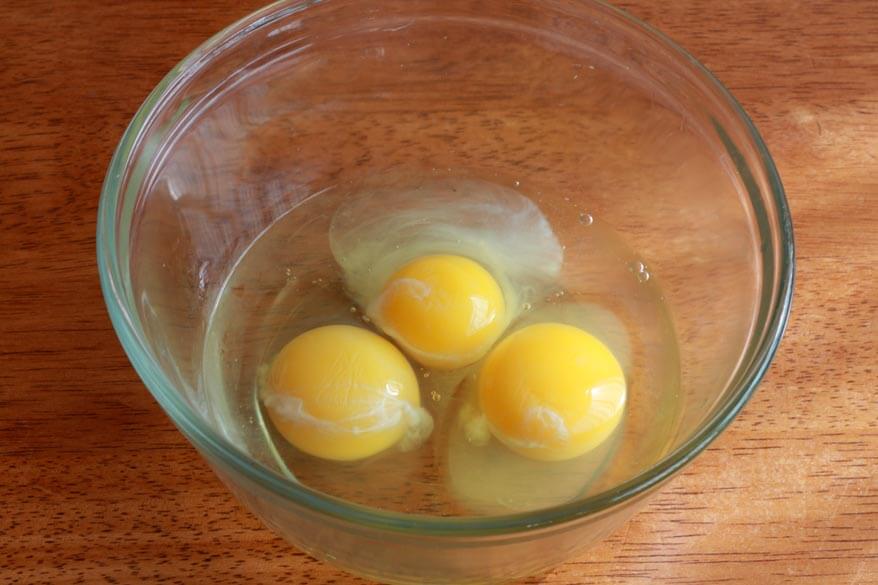 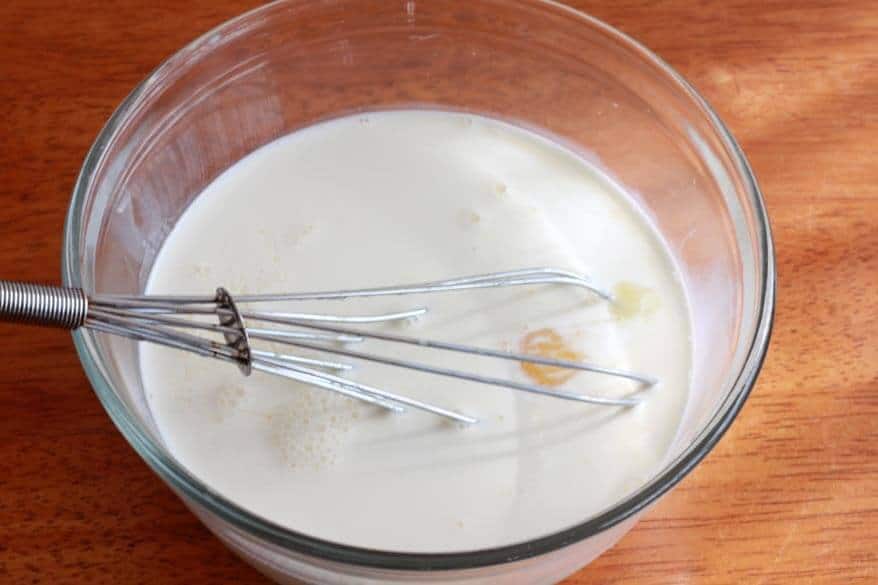 Add the salt and pepper and whisk generously until the eggs a thoroughly combined. 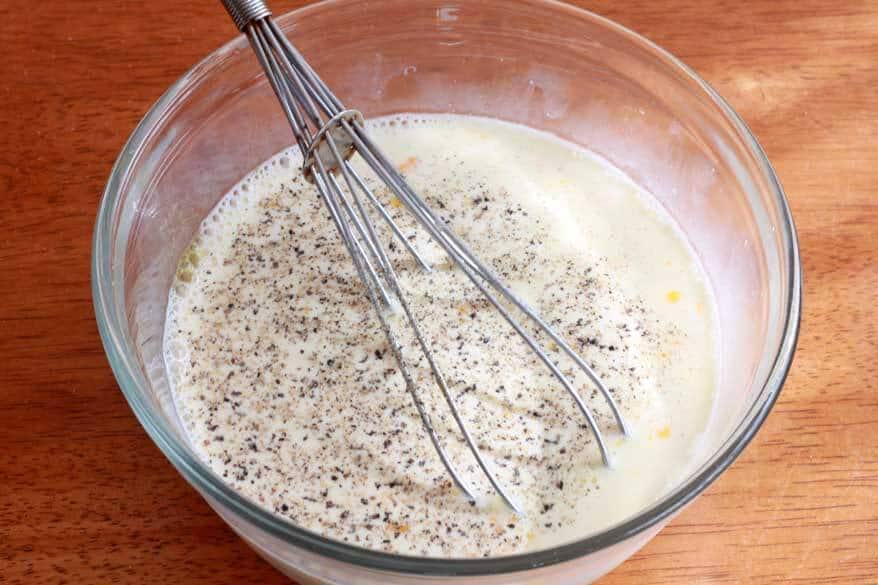 Spread the leek, roasted tomatoes, and crumbled bacon into the crust. 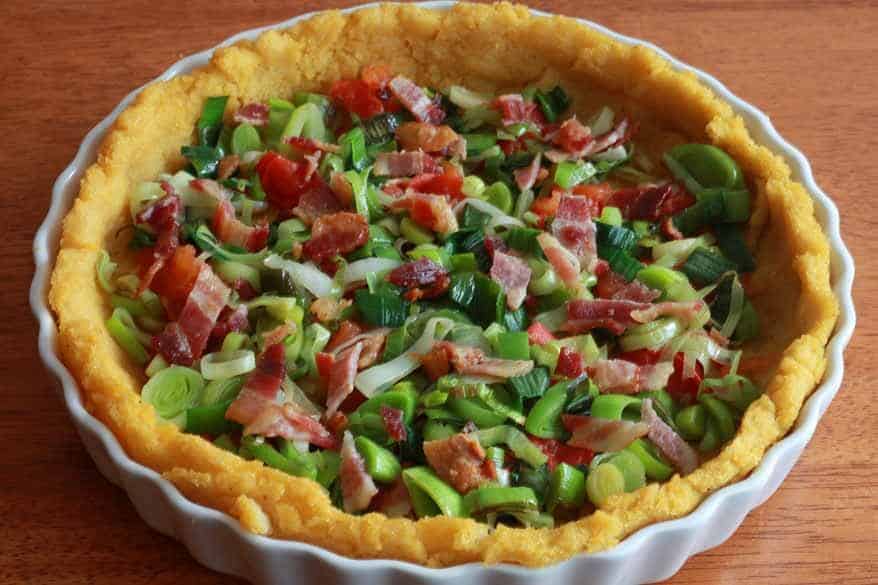 Pour the half-and-half/egg mixture over it. 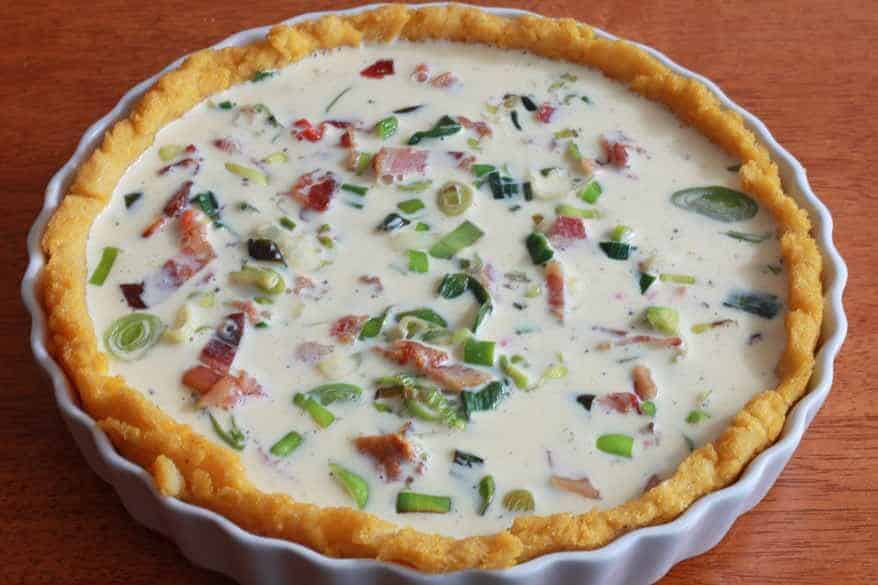 Sprinkle the cheese over it. 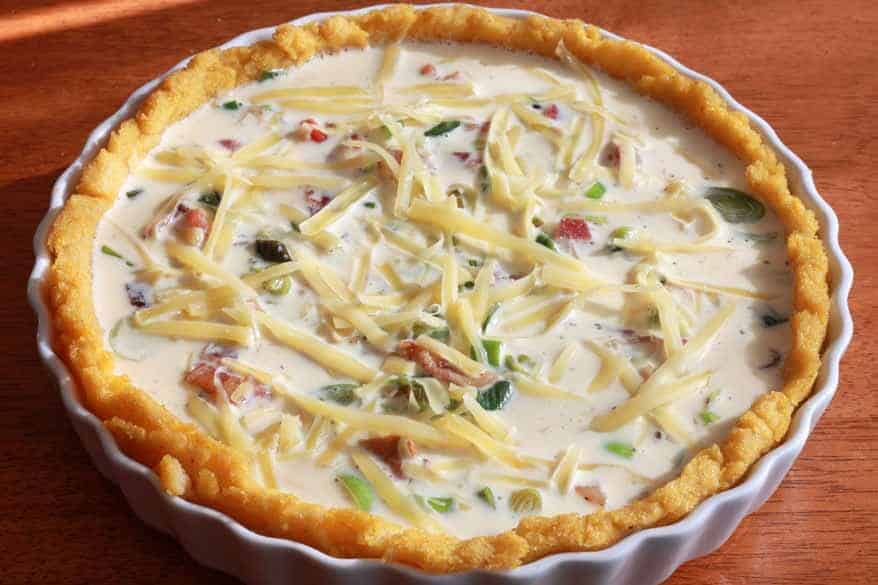 In an oven preheated at 325 degrees F, bake for 35-40 minutes or until until golden brown on top and the middle of the quiche is firm.  Let cool for 5 minutes before slicing and serving. 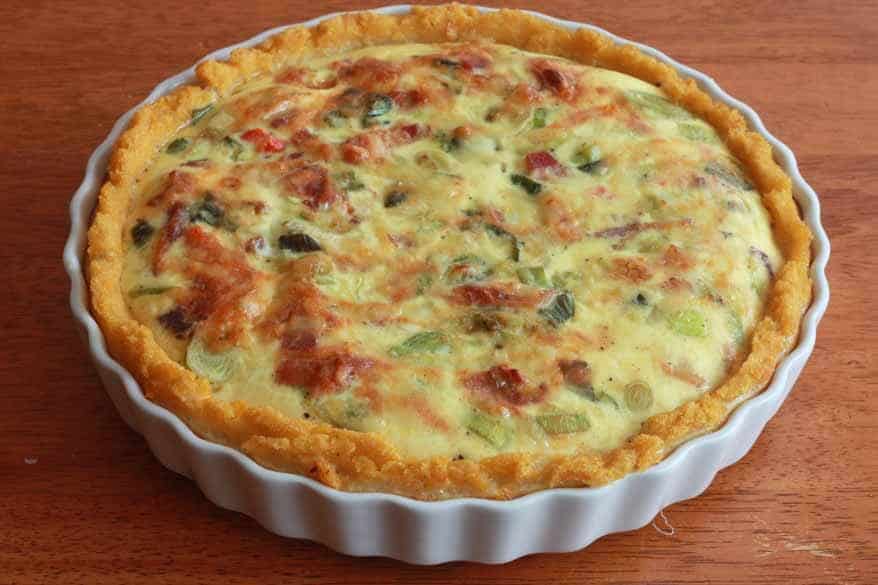 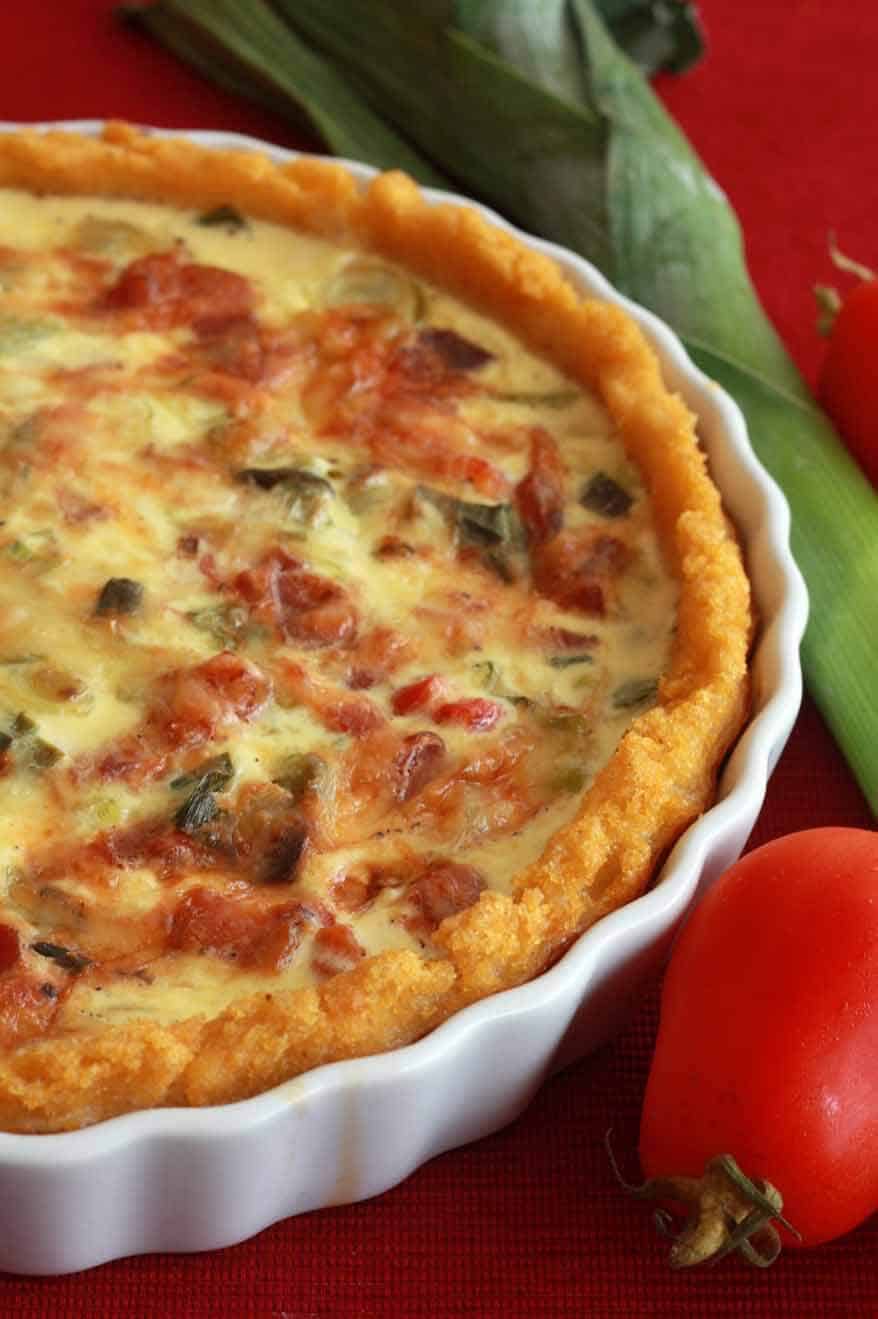 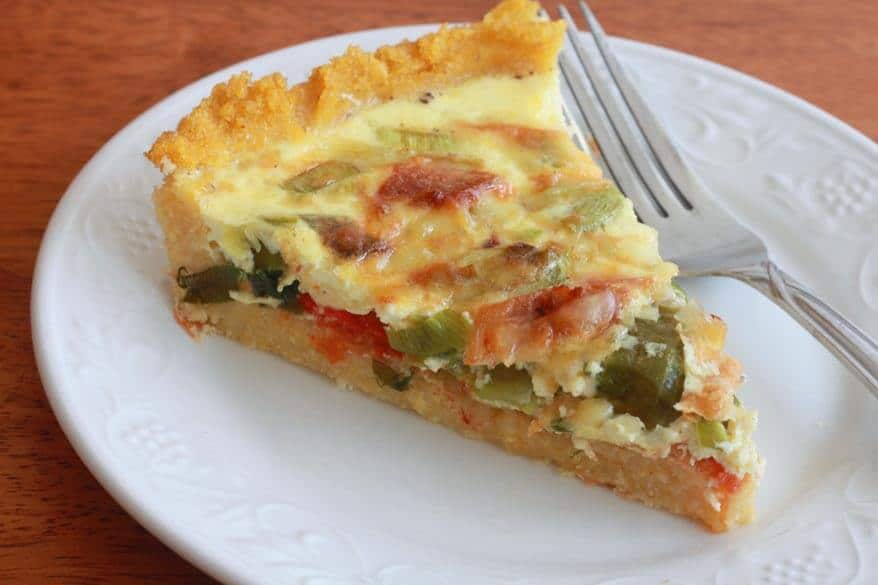 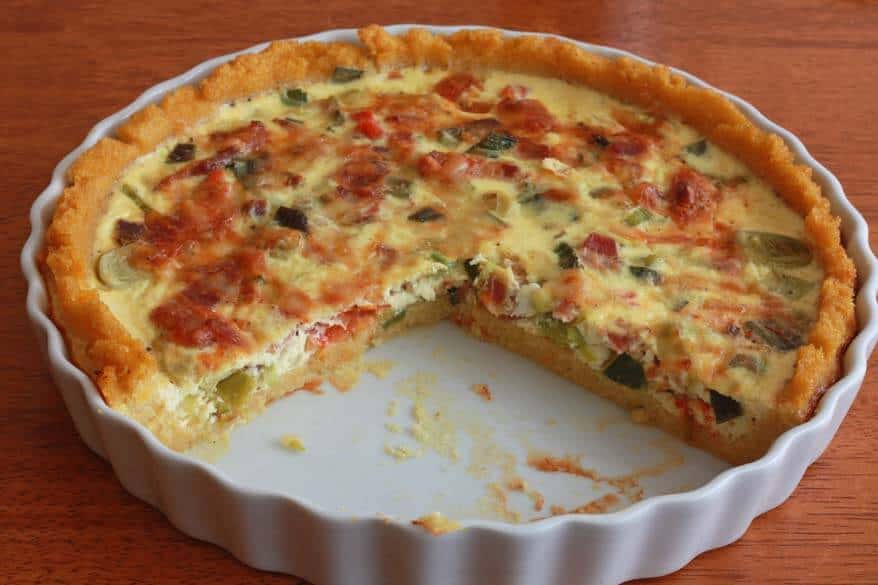 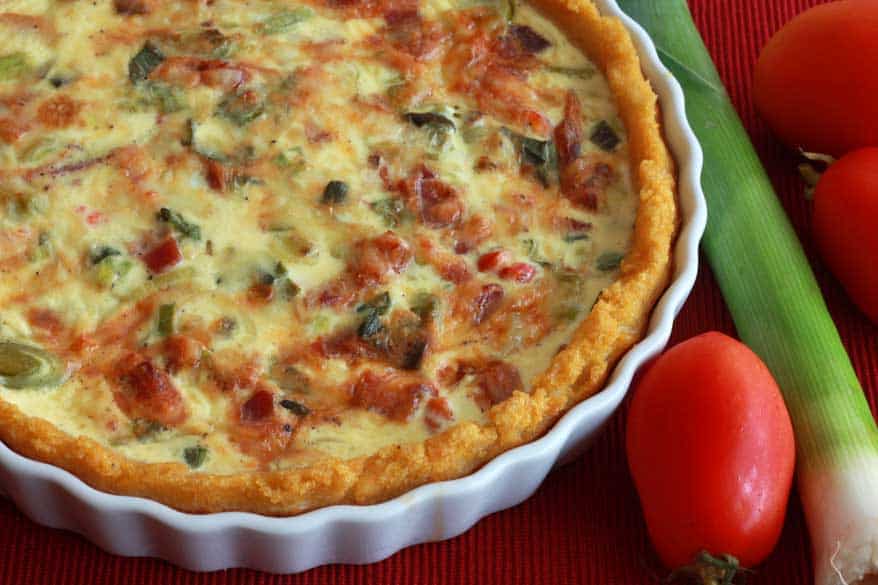 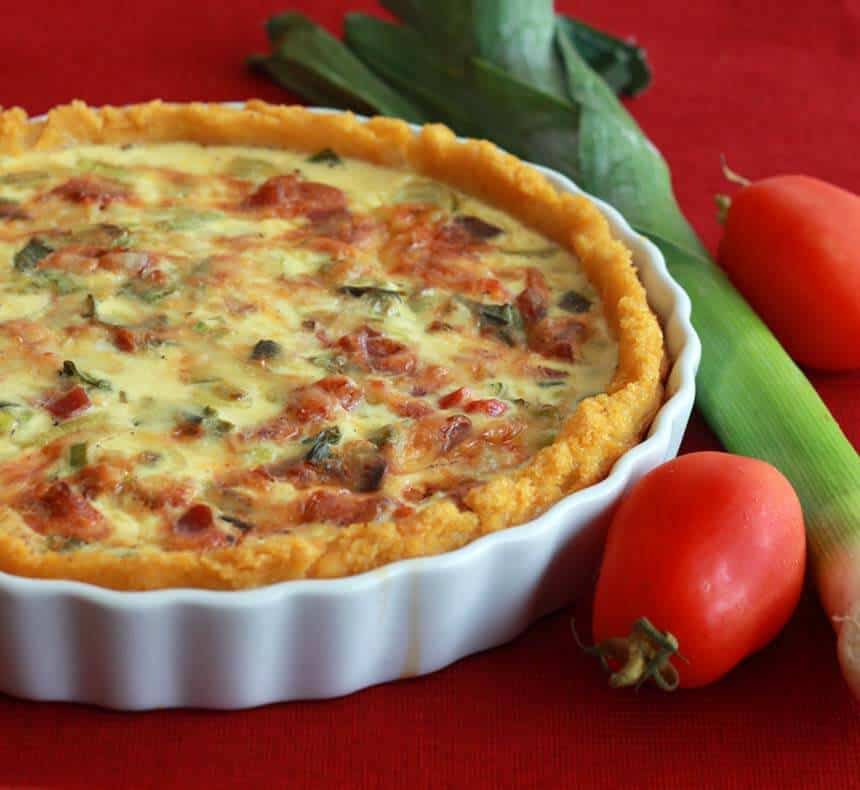