Life is made sweeter with this BEST peach crisp recipe!  You can make it in the slow cooker or in the oven – your choice – and you’ll get perfect results either way! 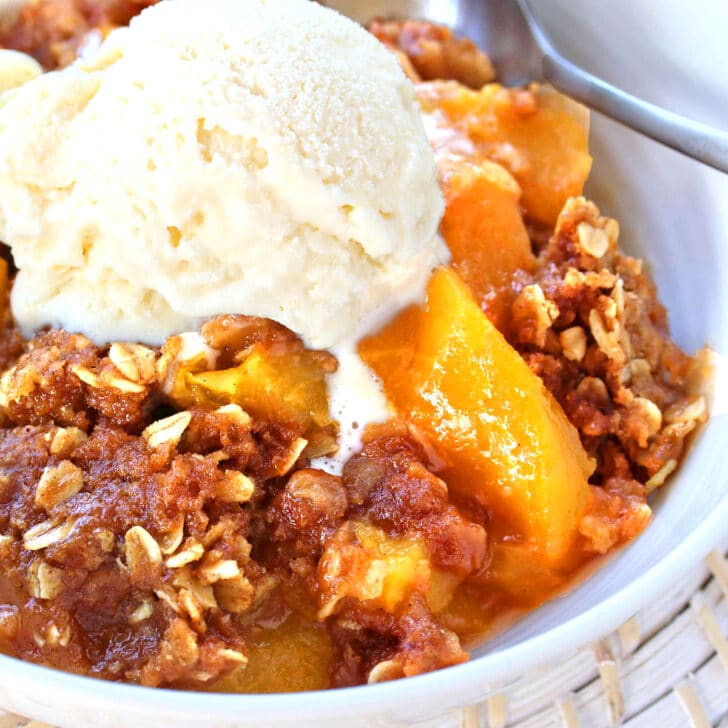 Crisps are one of my all-time favorite desserts.  Growing up my mom would make her famous apple crisp that had everyone clamoring for second helpings.  And though cobblers and crumbles are both delicious as well, between the three crisps are hands down my favorite.  It’s that crunchy caramelized topping that really takes it to the next level for me.  And this peach crisp is just downright wow-worthy!

Every year in mid to late summer I pick up a bulk load of peaches – this time it was 75 pounds!   I use them to make jams, chutneys, peach sauces, fruit leather and freeze a bunch of peach slices for smoothies.  And of course I can’t resist making at least two or three batches of this peach crisp!

The terms are often confused and while there are similarities they are different.

A crisp is a baked fruit dessert with crumbly streusel-like topping that is made with oats, flour, butter and sugar and can sometimes include nuts.  A crumble is similar except that the crumbly topping has no oats, rarely includes nuts, and is generally made only with flour, butter and sugar. A cobbler is also a baked fruit dessert but is a deep-dish version (as opposed to the shallower crisp and crumble) and instead of a crumbly, streusel-like topping it is a drop-biscuit or pie dough topping. 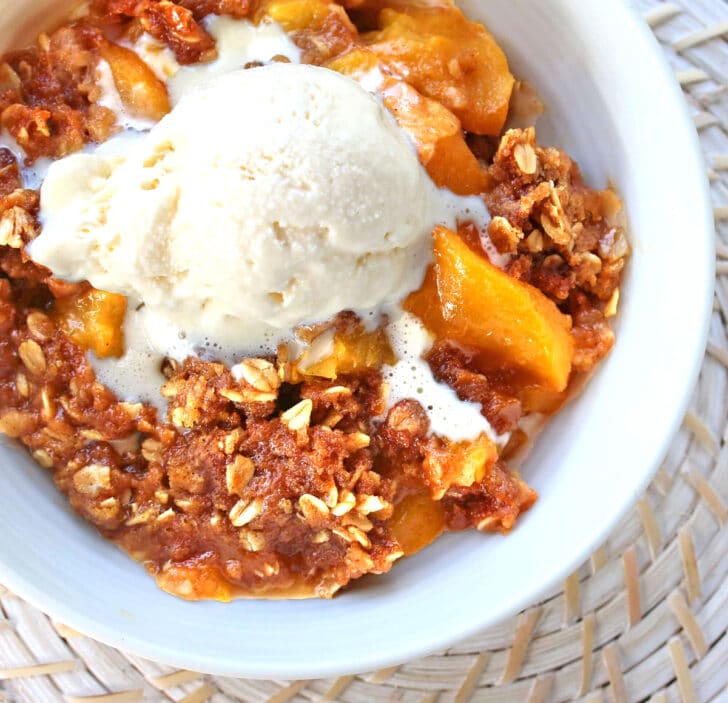 Yes!  Of course the peaches themselves have fructose, but you can substitute all of the added sugar by using something like Sukrin Gold for the brown sugar and Swerve (or similar) for the white sugar.

Can I Substitute the Peaches for Another Fruit?

Absolutely.  This recipe provides the perfect foundation for any number of fruits including apple, plum, pear and more!

Can This Be Made In the Slow Cooker or Crock Pot?

Yes!  This recipe includes instructions for preparing the crisp in a slow cooker as well as baking it in the oven.  Both ways are equally delicious, the difference lies in the texture of the crumble with the oven version being crispier.  But I’ll also show you how to “crisp up” the peach crisp using the slow cooker route! 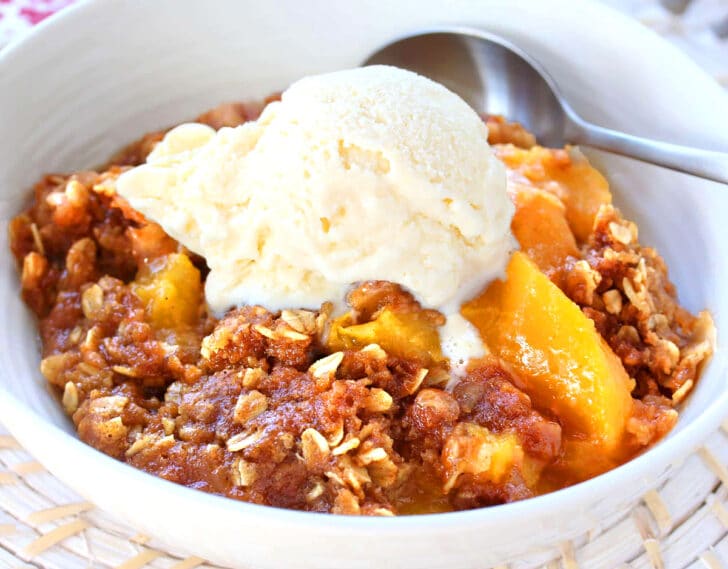 In a large bowl combine the peaches, sugar, flour, lemon juice and vanilla. 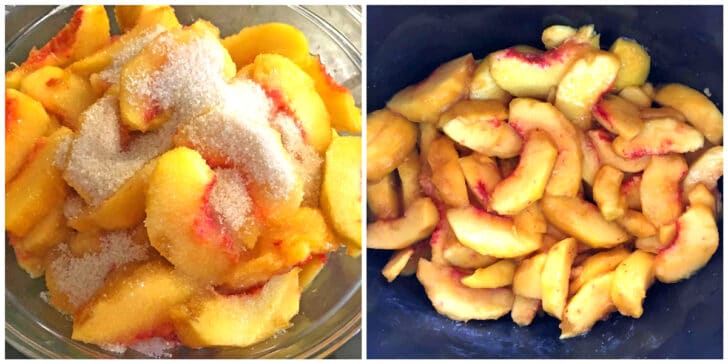 In another bowl, combine the flour, oats, brown sugar, cinnamon, baking powder, baking soda and salt.  Cut the butter into the flour mixture until it resembles coarse crumbs.

Place the crumb topping over the peaches.  Close the lid and cook on LOW for 4 hours or on HIGH for 2-3 hours until the peaches are soft and the topping is golden brown.  During the last 30 minutes open the lid to allow the topping to crisp up a bit. 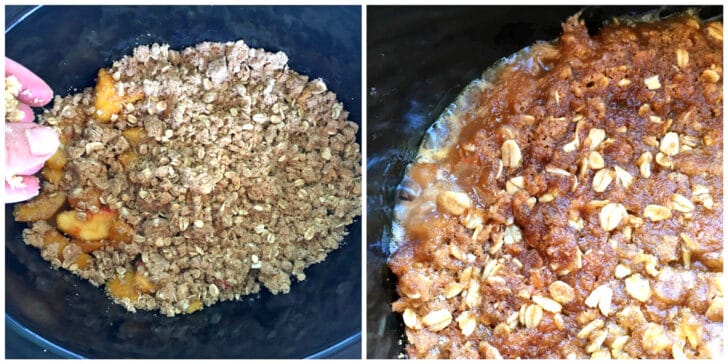 Place the peach mixture in the bottom of a 3-quart casserole dish and sprinkle the crumble on top.  Bake for 20-25 minutes or until bubbly and light golden brown. 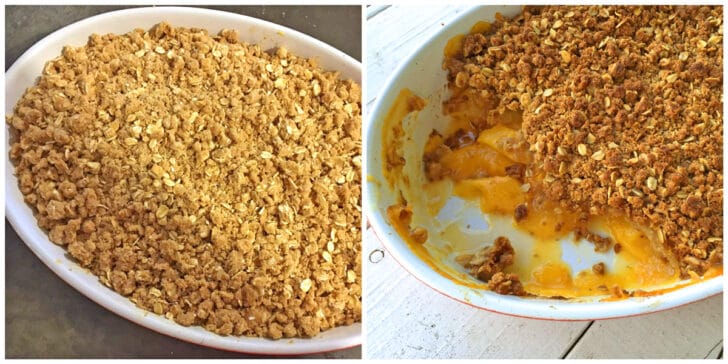 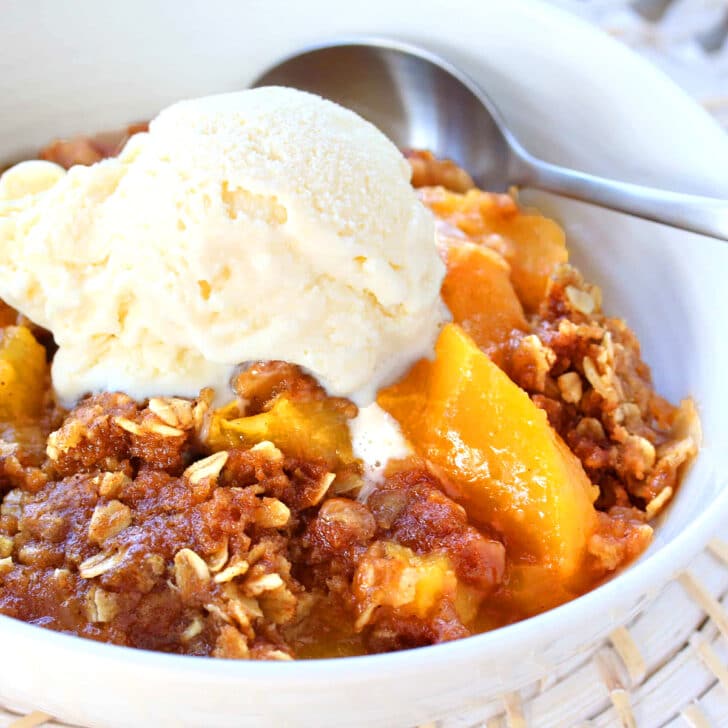 Be sure to also try our phenomenal Rhubarb Crisp! 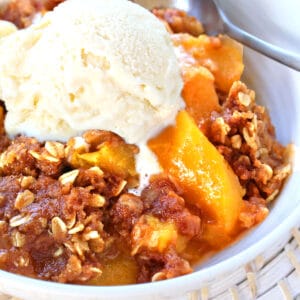 Kimberly Killebrew
Life is made sweeter with this delicious peach crisp! It can be made in your slow cooker or in oven with perfect results either way!
Print Recipe
5 from 20 votes
Prep Time 15 mins
Cook Time 25 mins
Total Time 40 mins
Course Dessert
Cuisine American
Servings 8 servings
Calories 393 kcal