The quintessential Scottish dish for several centuries!  Rich, robust and flavorful, Scotch Broth represents everything that is good about rustic home cooking. 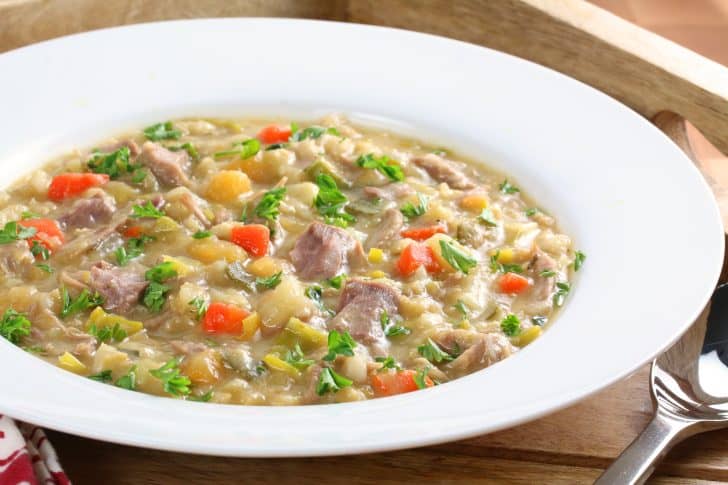 I’ve partnered with Aneto to bring you this delicious soup.

The first time I had this soup was in a small pub outside Inverness in the Scottish Highlands.  It was the perfect meal for a cool afternoon and left me feeling happily nourished and ready to continue my sightseeing adventures.

In her 1856 cookbook, Cook and Housewife’s Manual, Margaret Dods referred to Scotch Broth as the “Pot au Feu of Scotland.”  Pot au Feu has also been referred to as “the quintessence of French family cuisine [and] the most celebrated dish in France” so in like manner is reflective of the important place that Scotch Broth has taken at the Scottish family table for centuries.

Scotch Broth has been referenced in literature dating back to the 1600’s and it’s popularity has crossed many borders, including the U.S. where the recipe appeared in an 1881 American publication “The Household Cyclopedia.”

The popularity of Scotch Broth has become so widespread that it’s sold in cans in grocery stores and even some of the biggest brands have picked it up. 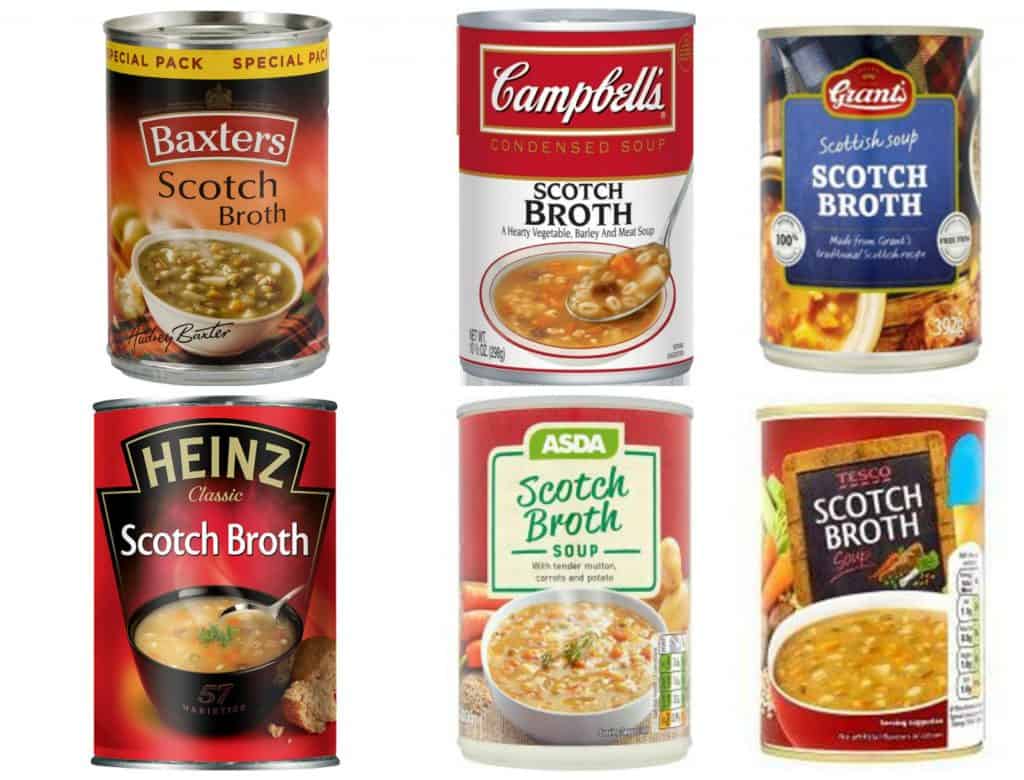 I’ll admit I’ve never had the canned version but what I can tell you is that once you’ve made and tried the real deal you’ll understand why Scotch Broth has been so central to Scottish cuisine.

The term “broth” is a little misleading because more so than a thin liquid that is sipped out of a mug or slurped from a spoon, it is a rich, hearty, thick and satisfying soup – really more of a stew – that has traditionally been eaten as the main meal.  It’s loaded with vegetables, some fork-tender meat and generously thickened with barley, split peas and/or regular or red lentils.

Traditionally Scotch Broth would be made from whatever vegetables were in season but these would typically include rutabagas, carrots, turnips, cabbage, and leek.  Mutton or lamb is very traditional and imparts an especially rich flavor, but beef may also be used.  And if you have some bones to add to the pot, all the better.

Rich, robust and flavorful, Scotch Broth represents everything that is good about rustic home cooking.  Traditional Scottish housewives, ever thrifty and knowing how to make much of little, knew how to gather up whatever fresh vegetables were available, add them together with lamb, mutton or beef, some barley, split peas and lentils (all staple Scottish ingredients), and simmer the mixture low and slow for hours to achieve a meal that by dinnertime would nourish both body and soul.

And so we present Scotch Broth, “the Pot au Feu of Scotland!” 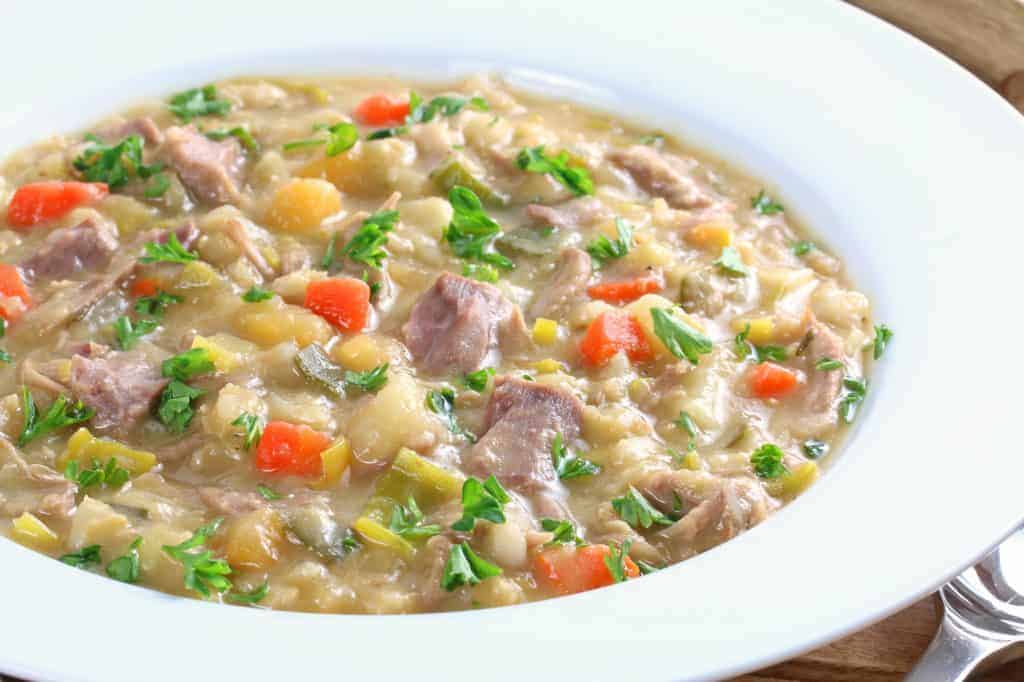 Quality ingredients are key to make the best Scotch Broth.   For the best flavor possible, use a high quality chicken broth as its base, especially if you’re not adding soup bones.  We’re using our favorite chicken broth made by Aneto.  Based in Barcelona Spain, Aneto makes their broths just like you make in your own kitchen:  They select quality free-range chicken and the freshest vegetables – onions, carrots, leek, cabbage, celery – season it with sea salt and add everything to gigantic pots where they simmer it low and slow for several hours before pouring the broth into cartons to sell around the world. 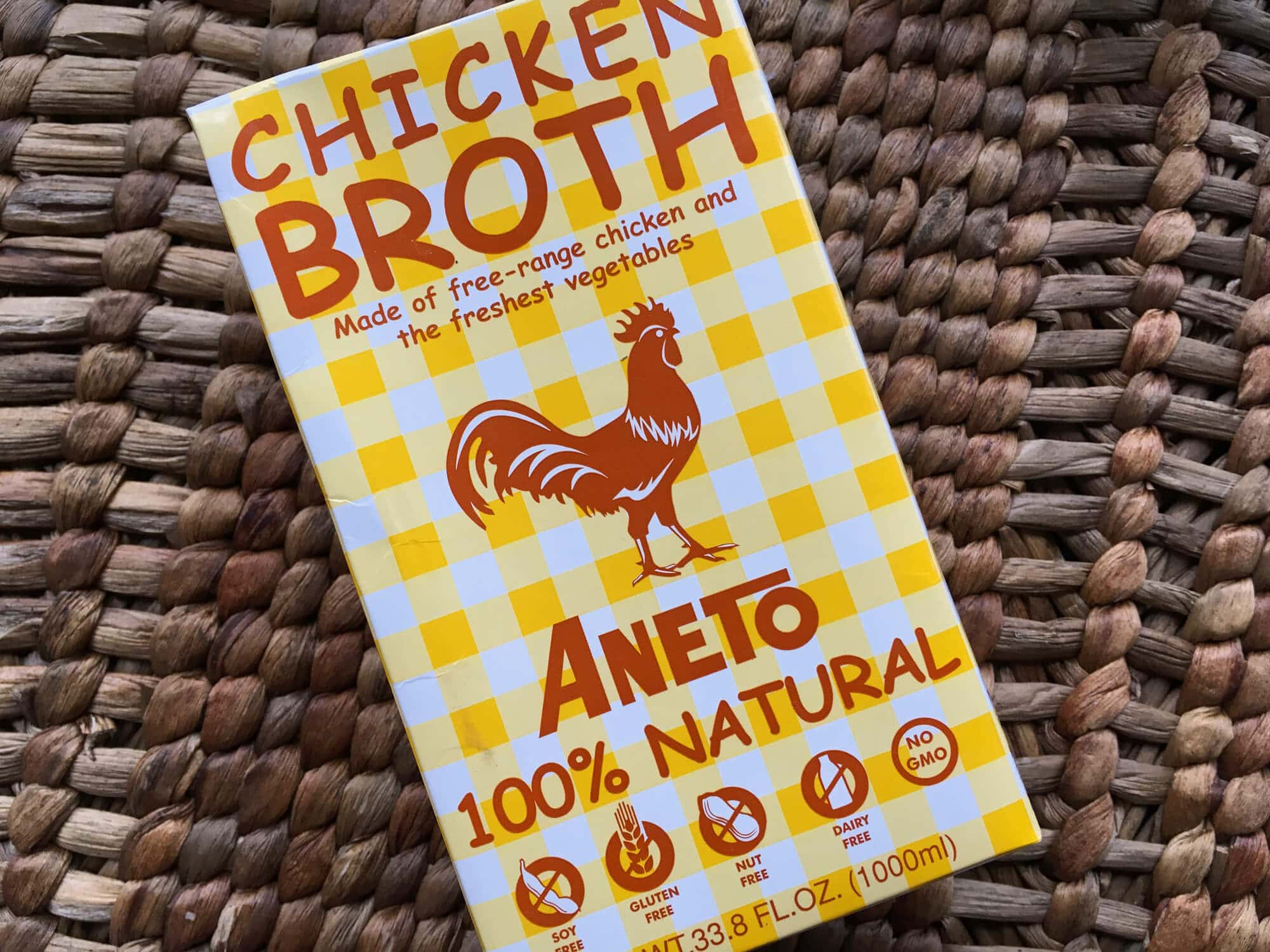 We had the opportunity to tour Aneto’s factory from top to bottom, watch the broth-making process from start to finish, and were absolutely blown away by the beauty and simplicity of how they create their broths.

In the world of broth manufacturers, Aneto is truly unique and their broth-making process is one of the most encouraging and inspiring things I’ve witnessed.  Come read about it and  take our virtual tour of the world’s most remarkable broth manufacturer. 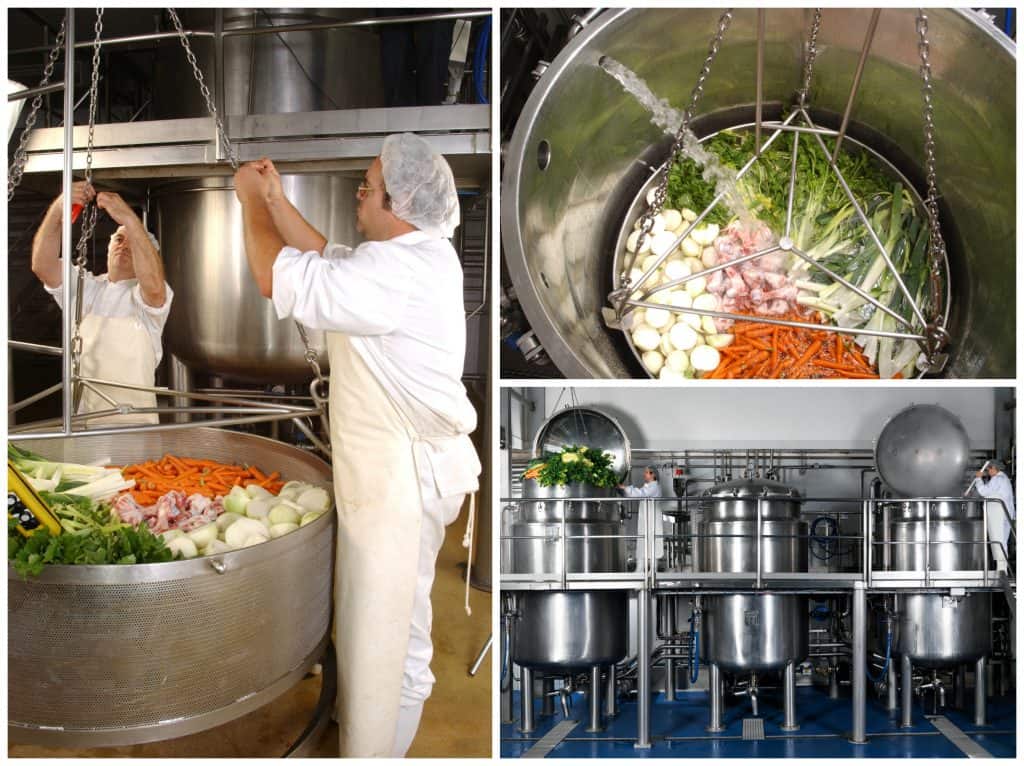 For a wonderfully flavor-packed Scotch Broth, we’re going to use leek, carrots, onions, rutabagas, turnips and parsnips.  Get those cleaned and diced. 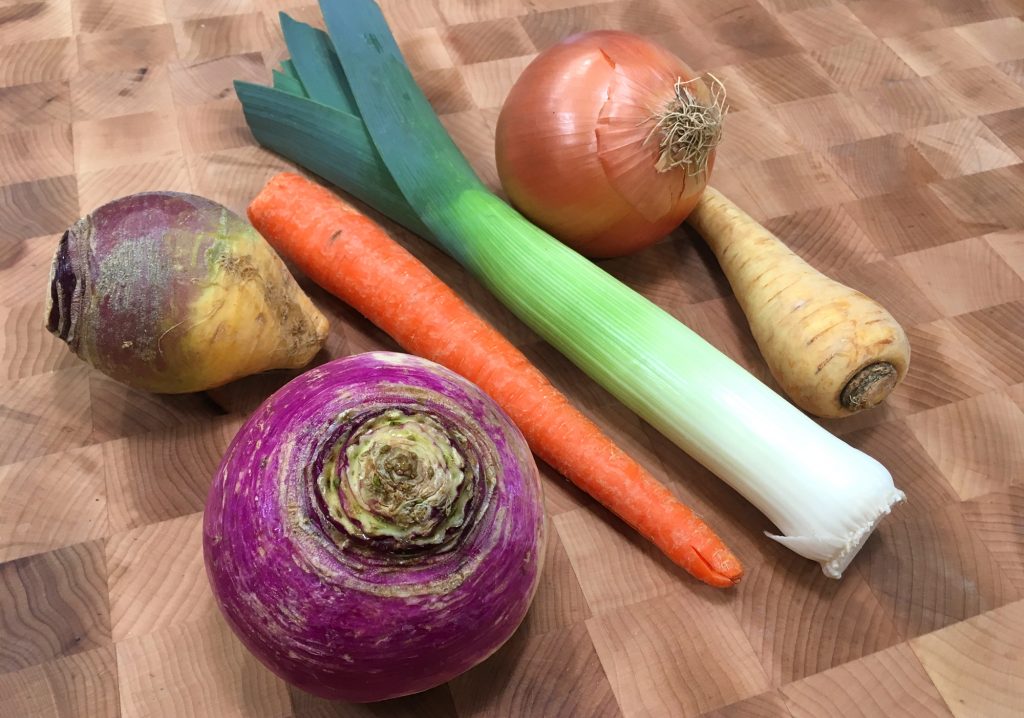 Cook the onions and garlic in the oil in a heavy stock pot or Dutch oven until softened 4-6 minutes.

Cook the onions and garlic in the lard or butter until softened, 4-6 minutes.  Add the lamb, herbs, barley, split peas and salt.

I tie my herbs with a bit of twine for easy removal later.  That’s entirely optional. 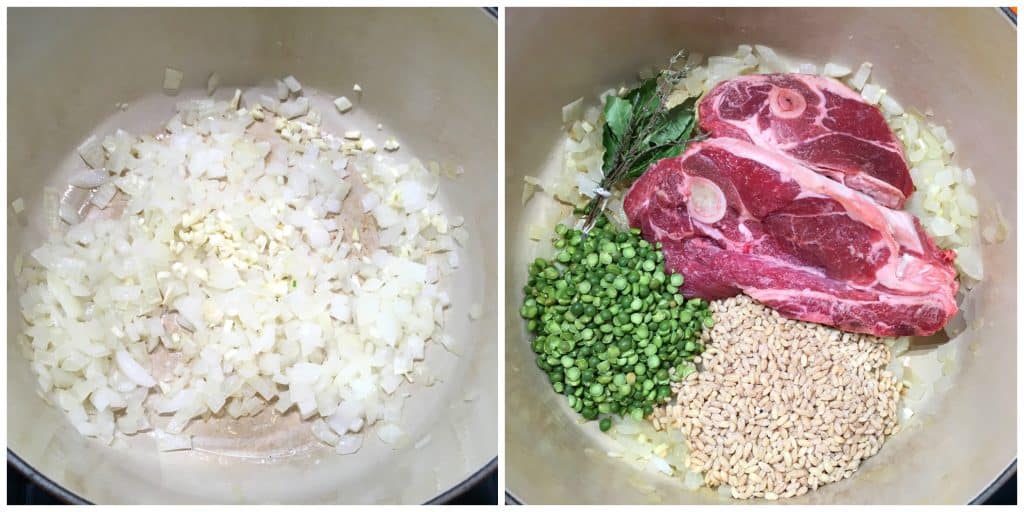 Add the broth, bring to a boil, reduce the heat to low, cover and simmer for 2 hours.  Skim off any foam.

Add the carrot, turnip, rutabaga and parsnip.  Simmer for another hour. 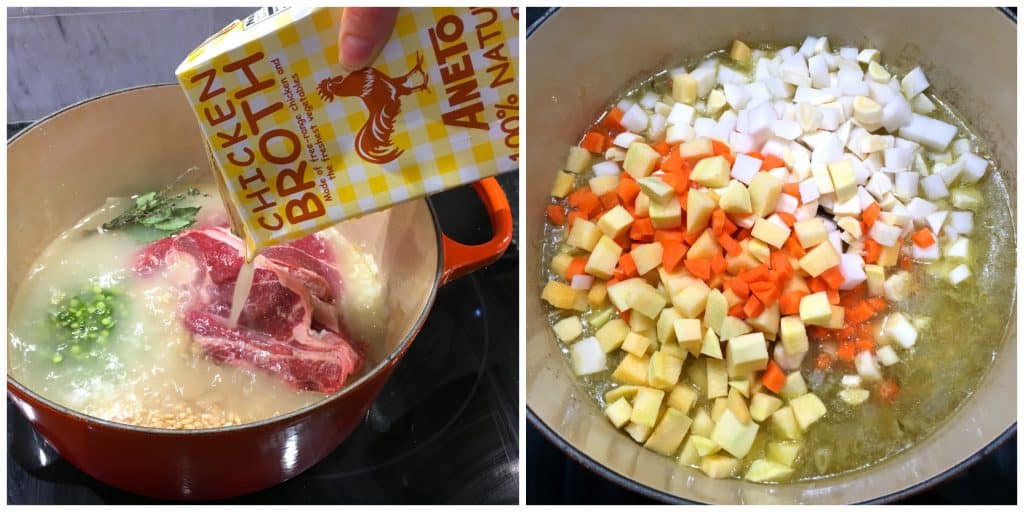 Remove the bay leaves and thyme sprigs.  Remove the meat, shred it and discard the bones. 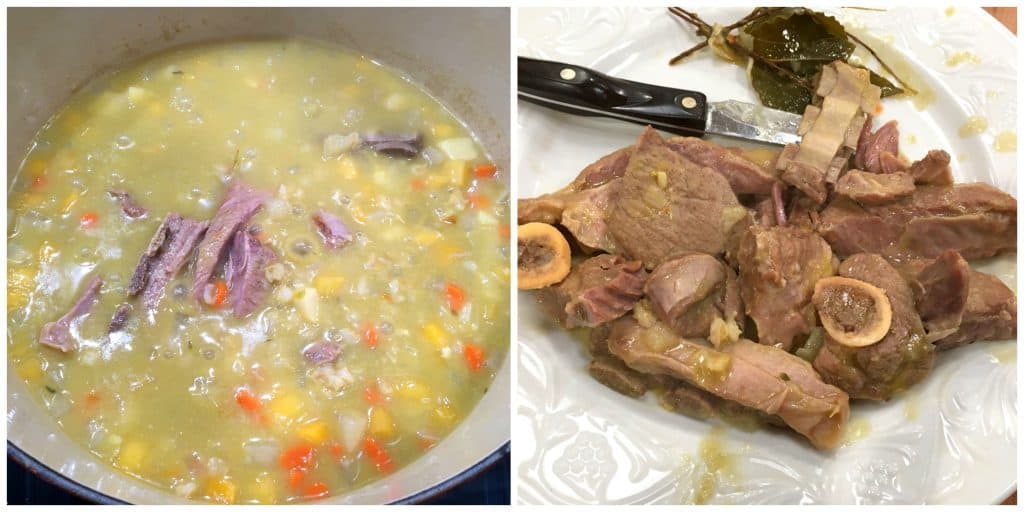 Return the shredded meat to the pot along with the leek and cabbage.  Simmer for another 30 minutes.  Add salt to taste.

We like this soup on the thick side, almost a stew.  If you prefer the soup a bit thinner, add some more broth. 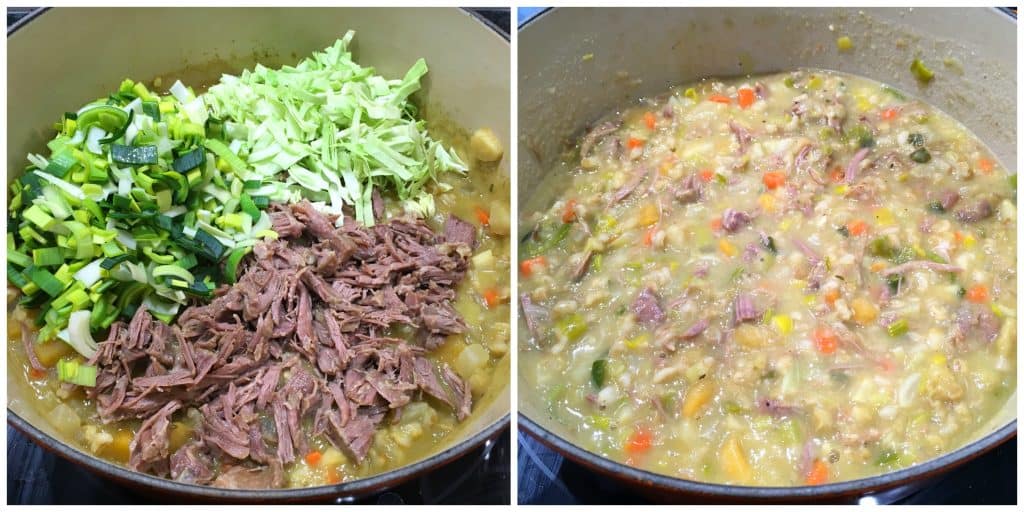 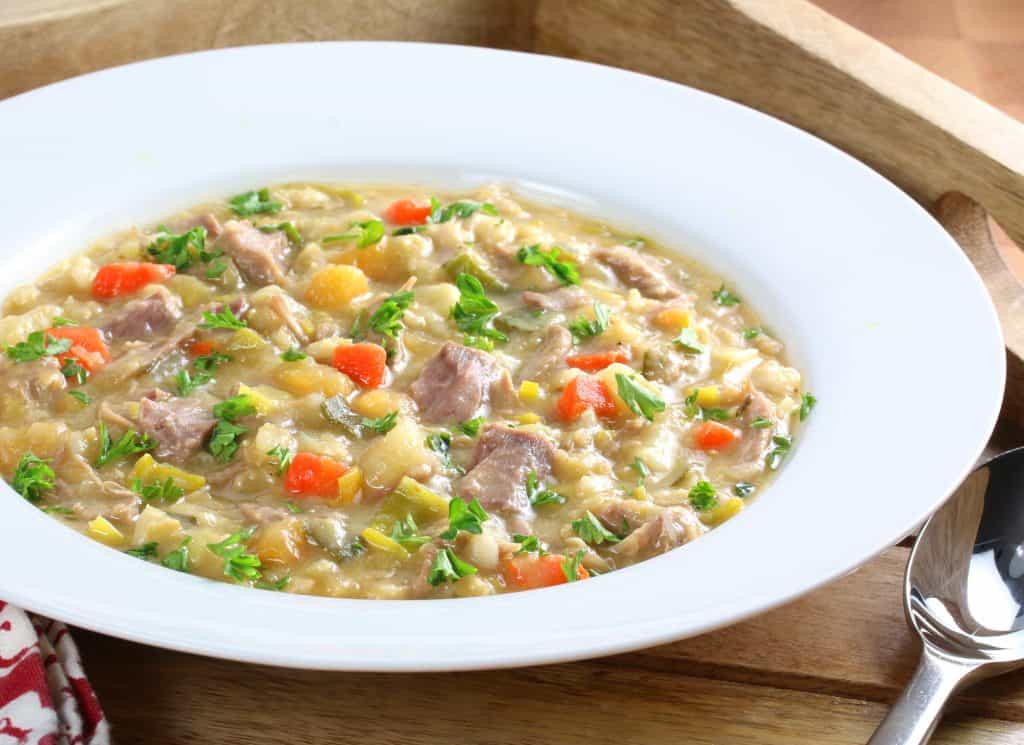 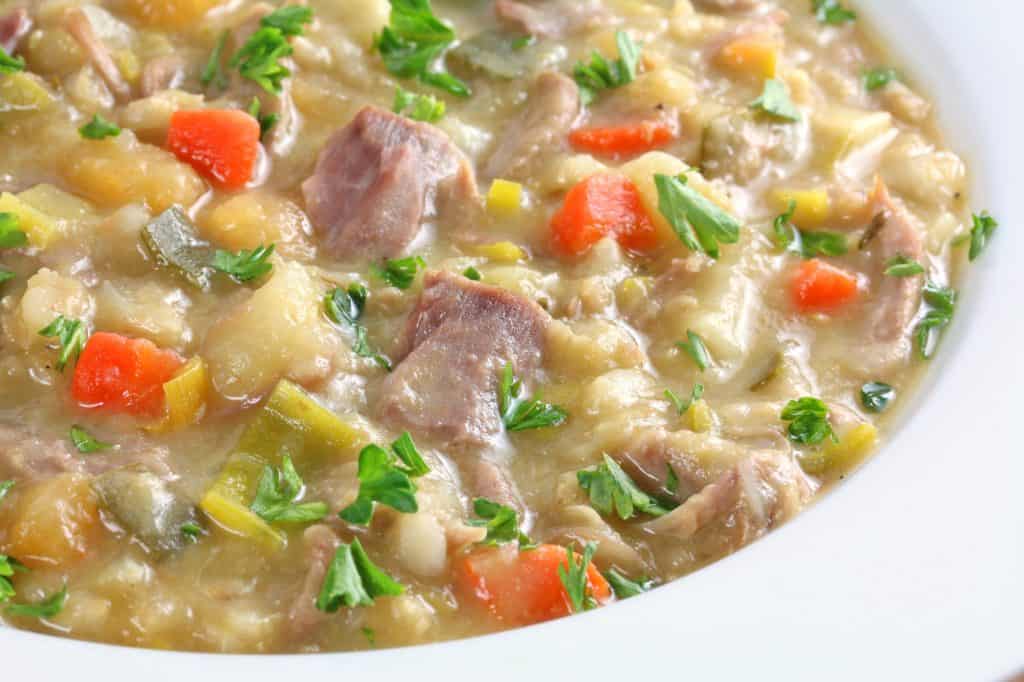 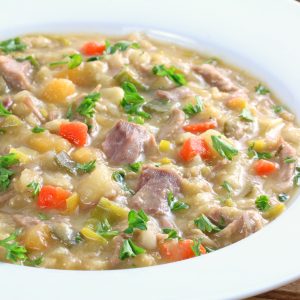 Thank you to Aneto for sponsoring this post and to my readers for supporting the brands who help make The Daring Gourmet possible!