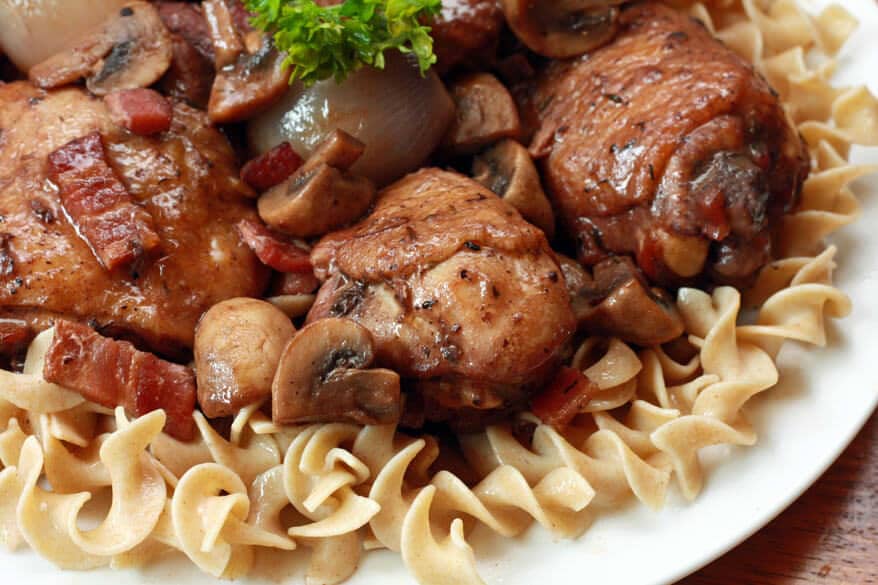 Another feast for the palate, prepare to have your taste buds enthralled by this famous French dish, a braise of chicken cooked with wine, bacon, mushrooms and onions.

Various legends exist as to the origin of Coq Au Vin, some of which trace it back to Julius Caesar’s encounter with the Gauls who populated what is now France.  Though the origin is uncertain, what is certain is that it’s at least 400 years old.  Coq Au Vin, French for “rooster with wine,” was a common peasant dish in former centuries.  Rural families in France commonly kept chickens and a rooster.  The rooster would be kept until it was too old to perform its duties, and would then be eaten.  Old roosters, however, were tough and stringy, so the common preparation was to slow-simmer it in wine in order to tenderize the meat and make it more palatable.  Coq Au Vin had thus become known as “poor man’s food.”

It wasn’t until the 20th century that Coq Au Vin achieved popularity both in and outside of France, as well as among both rich and poor.  Over the centuries it rose from its roots of poverty to achieve the rank of fine cuisine (though now no longer using old rooster ;)

Coq Au Vin is among the most popular of all French dishes.  It achieved its popularity here in the U.S. with Julia Child’s inclusion of it in her 1961 classic, Mastering The Art of French Cooking.

Here is a Daring Gourmet version of this classic dish, maximizing its luxurious flavors while maintaining its authenticity.