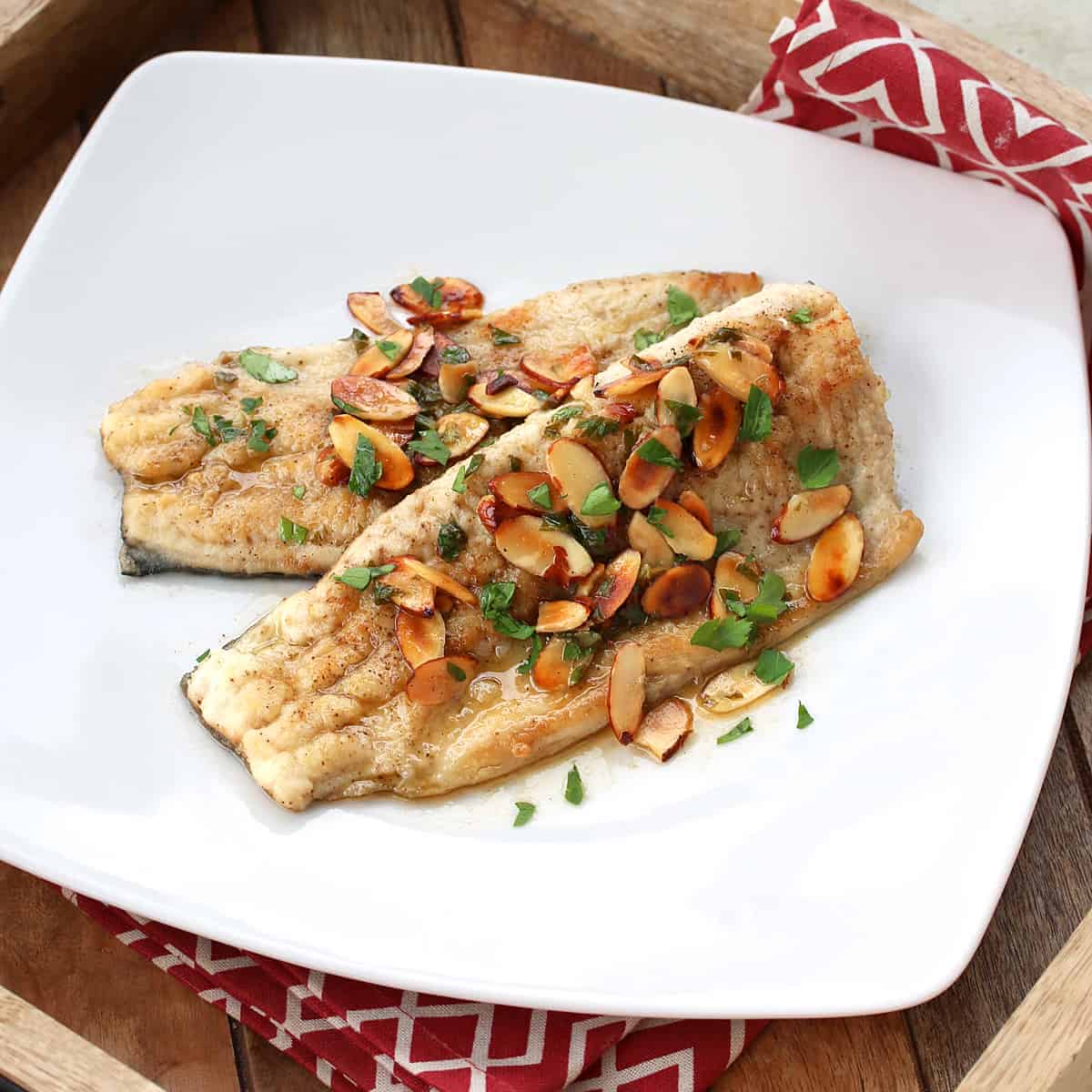 If you’re craving a five star seafood dinner but aren’t necessarily a Michelin star home chef, this Trout Almondine is the recipe for you! This upscale seafood dish is surprisingly easy to make with simple ingredients that you probably already have on hand. Treat yourself to a fine meal by making this easy trout dinner tonight!

What is Trout Almondine?

Trout almondine is a classic French dish and the term “almondine” is the anglicized version of amandine, which means “almonds” in French.  This fine dining seafood dish is now commonly found on the menus of upscale French restaurants throughout the world and even in restaurants throughout Louisiana where it has become a staple of Cajun cooking.

The star of the dish is the sauce, known in French as meunière.  Fish filets are dredged in flour, pan-fried, and then served with a buttery sauce featuring toasted almonds, fresh lemon juice, and parsley.  This famous dish is a wonderful play of contrasting flavors and textures. 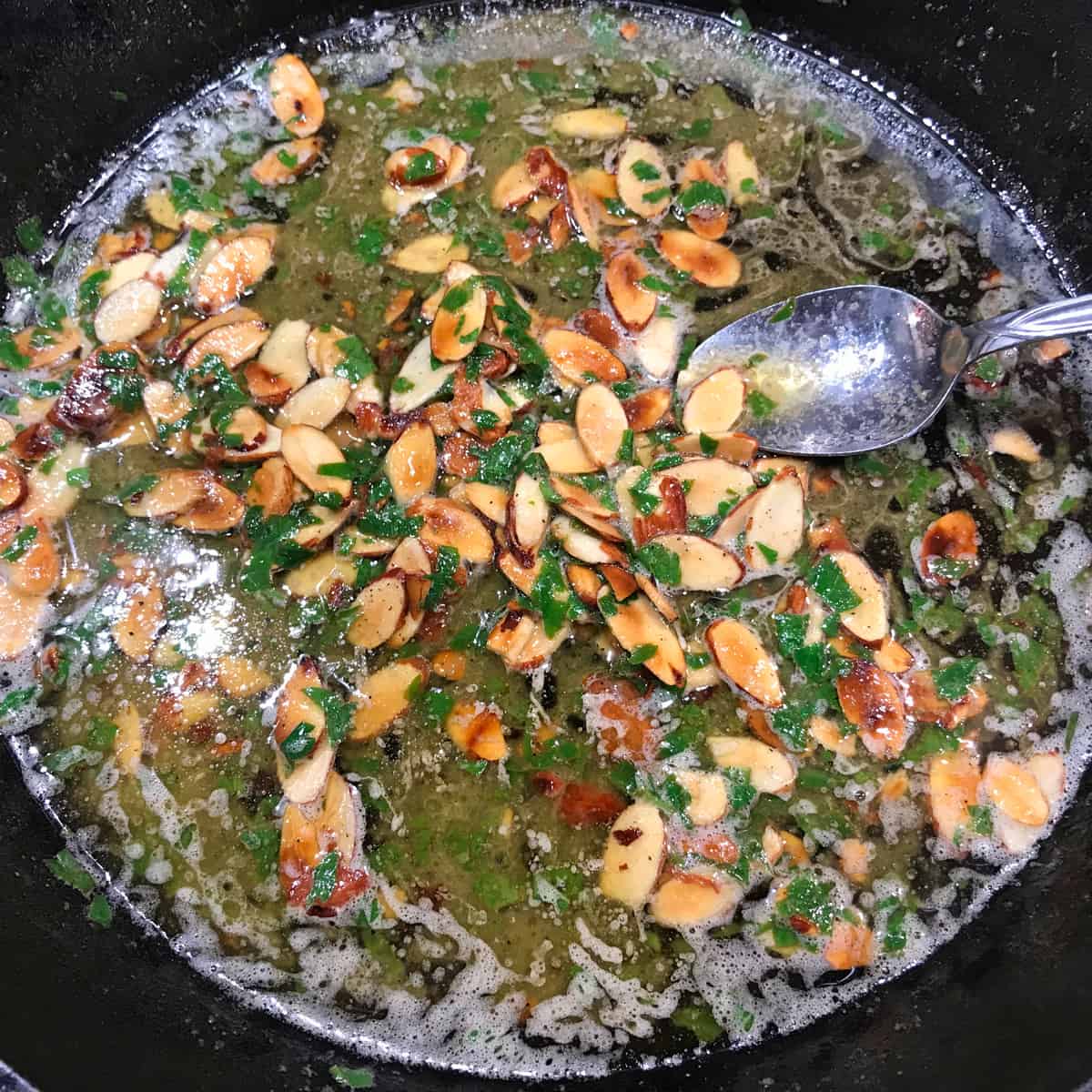 When most of think of fine dining, we often visualize fancy recipes that are finicky to make and are created using an expansive list of ingredients.   With Trout Almondine, however, you have an upscale restaurant classic that not only has a short ingredient list but it also easy to make.  Even a beginning cook can tackle this dish with confidence and create something that dinner guests will praise!

What Kind of Fish Can I Use?

The classic fish is trout.  Trout has a mild flavor so if you’re concerned about that dreaded “fishy” taste then trout is a great choice.  Trout almondine can be made with trout filets or the whole trout.  You’ll find it served both ways in restaurants.  If you prefer filets and are experienced in filleting fish, you can readily find whole trout at the supermarket.  You can also easily find “how to filet fish” tutorials on YouTube.

Alternatively, there are several other types of fish that are great for almondine.  You can also use cod, halibut, mackerel, sole, flounder, or tilapia. 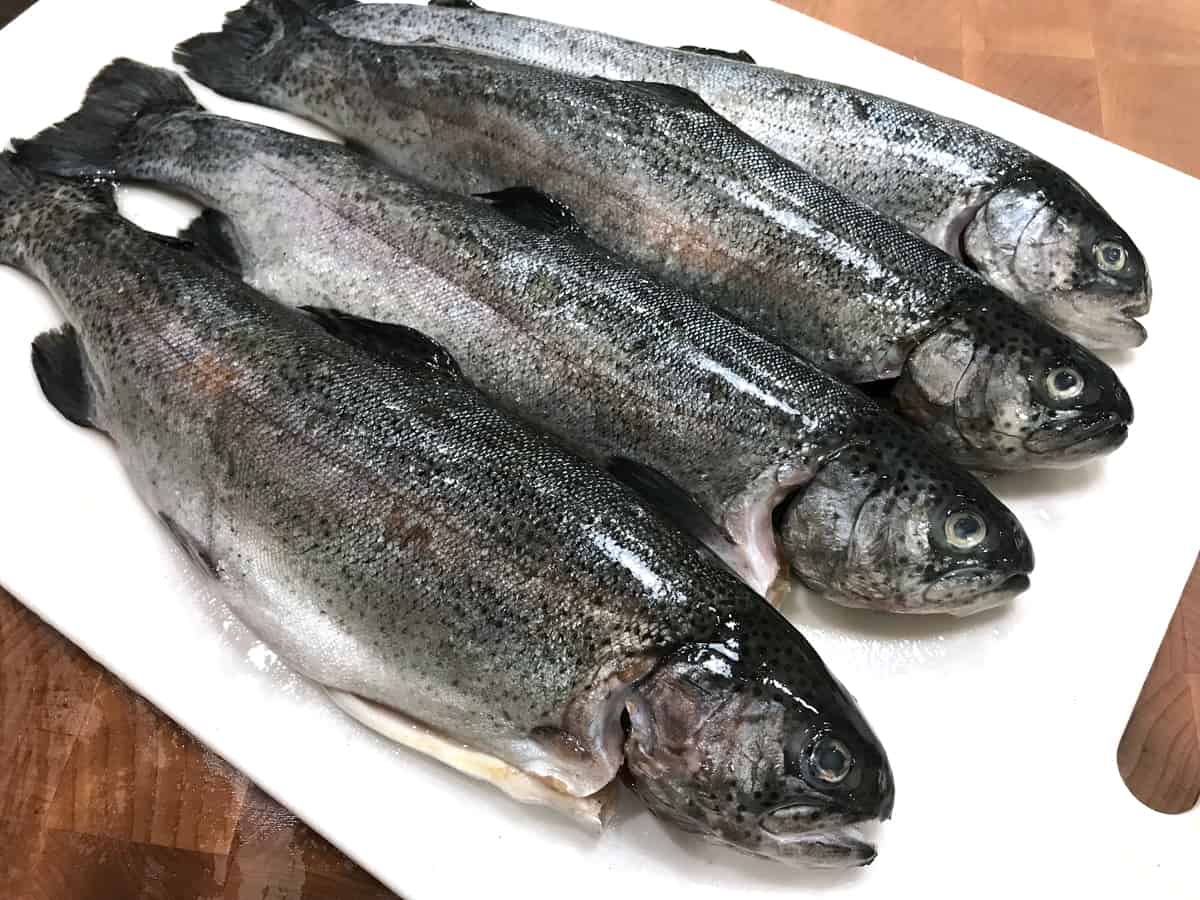 What to Serve With Trout Almondine

Traditional sides include steamed haricots verts (French green beans) and fingerling or small potatoes with butter.  Other great pairings include a simple leafy green salad and some rustic crusty bread you can use to mop up that phenomenal sauce.

Alternatively you can also serve it with the following: 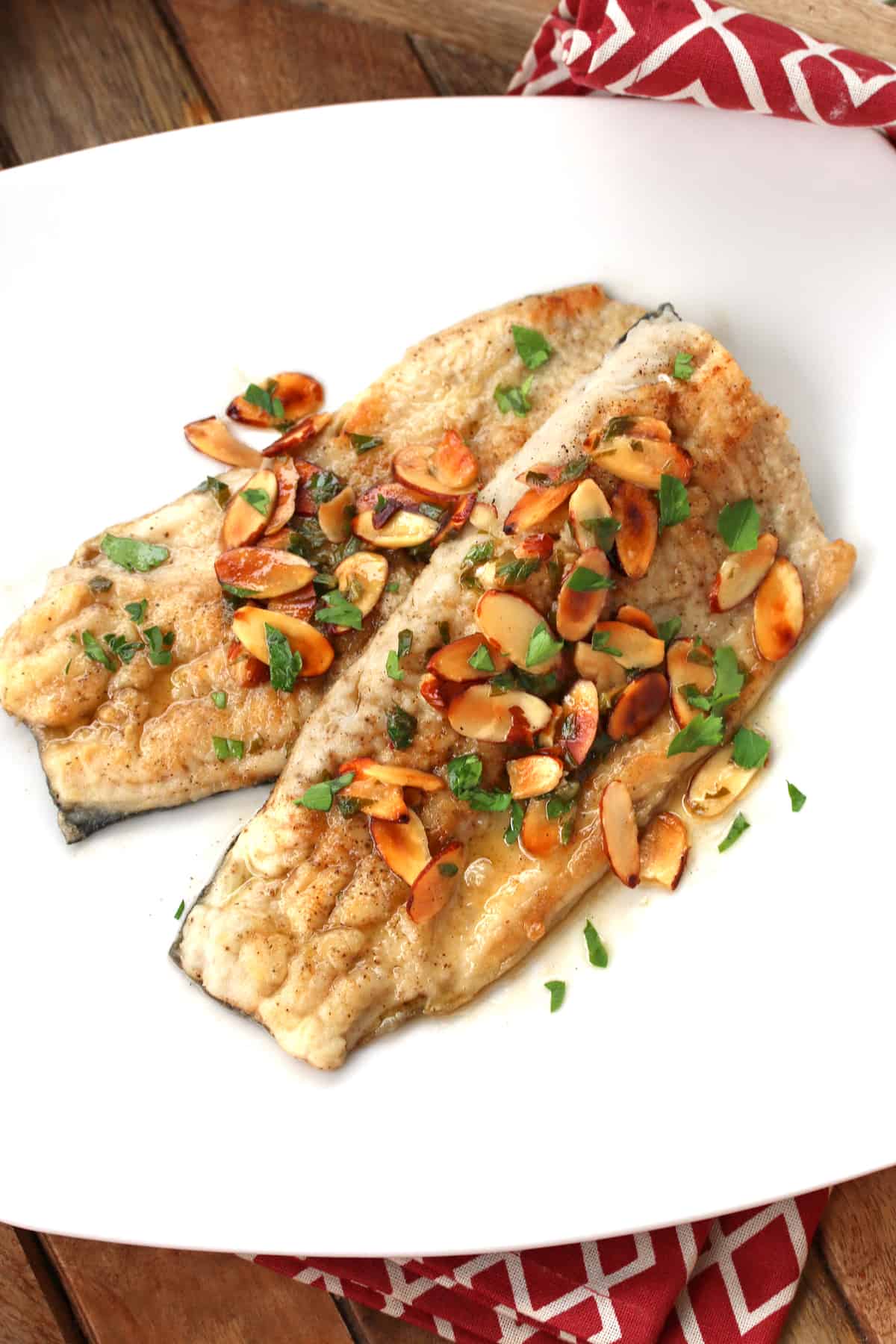 Using a dry pan heated over medium-high heat, toast the sliced almonds on both sides until lightly browned.  Be careful not to scorch them or they will be bitter.

Set aside until ready to use. 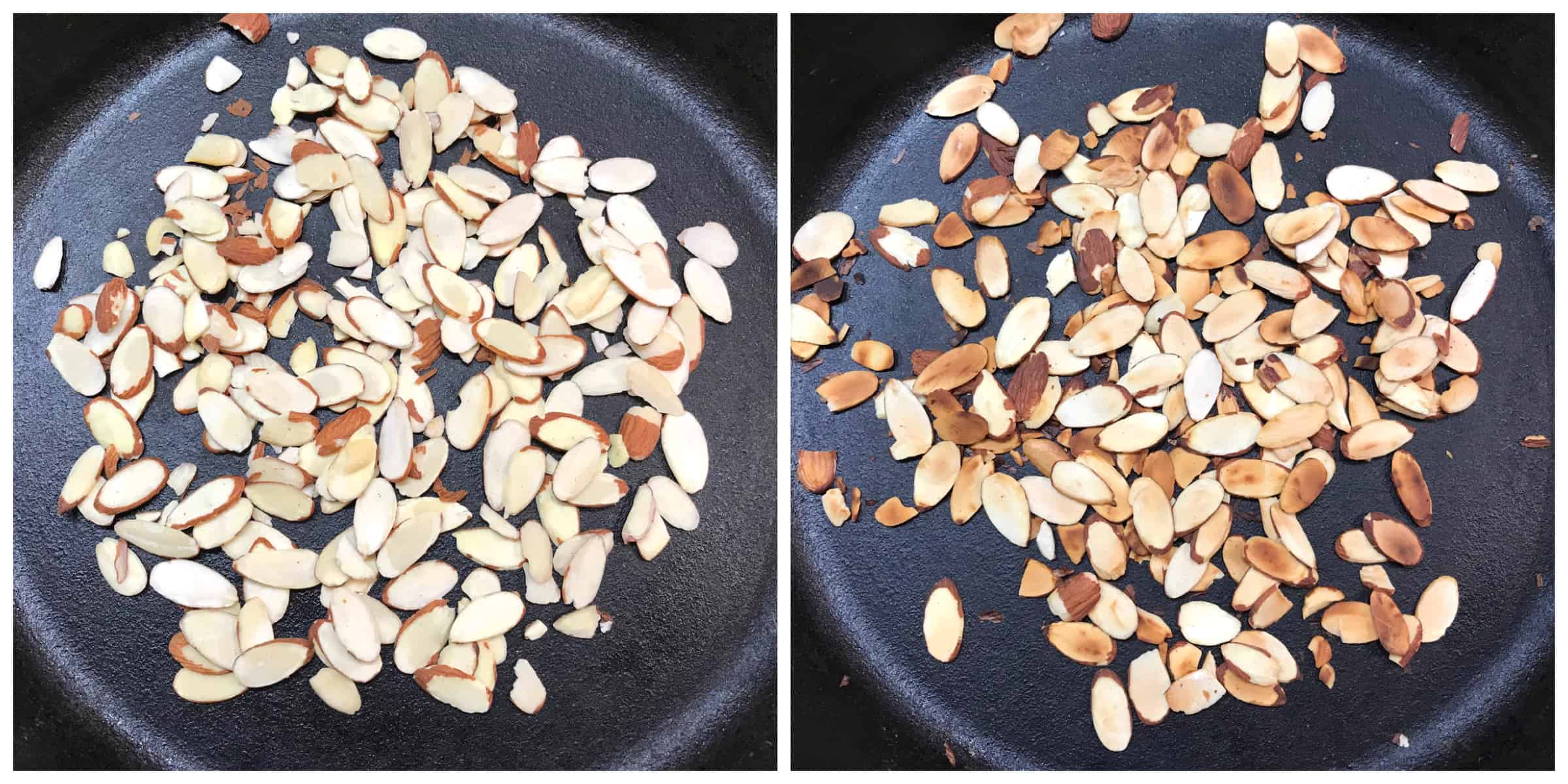 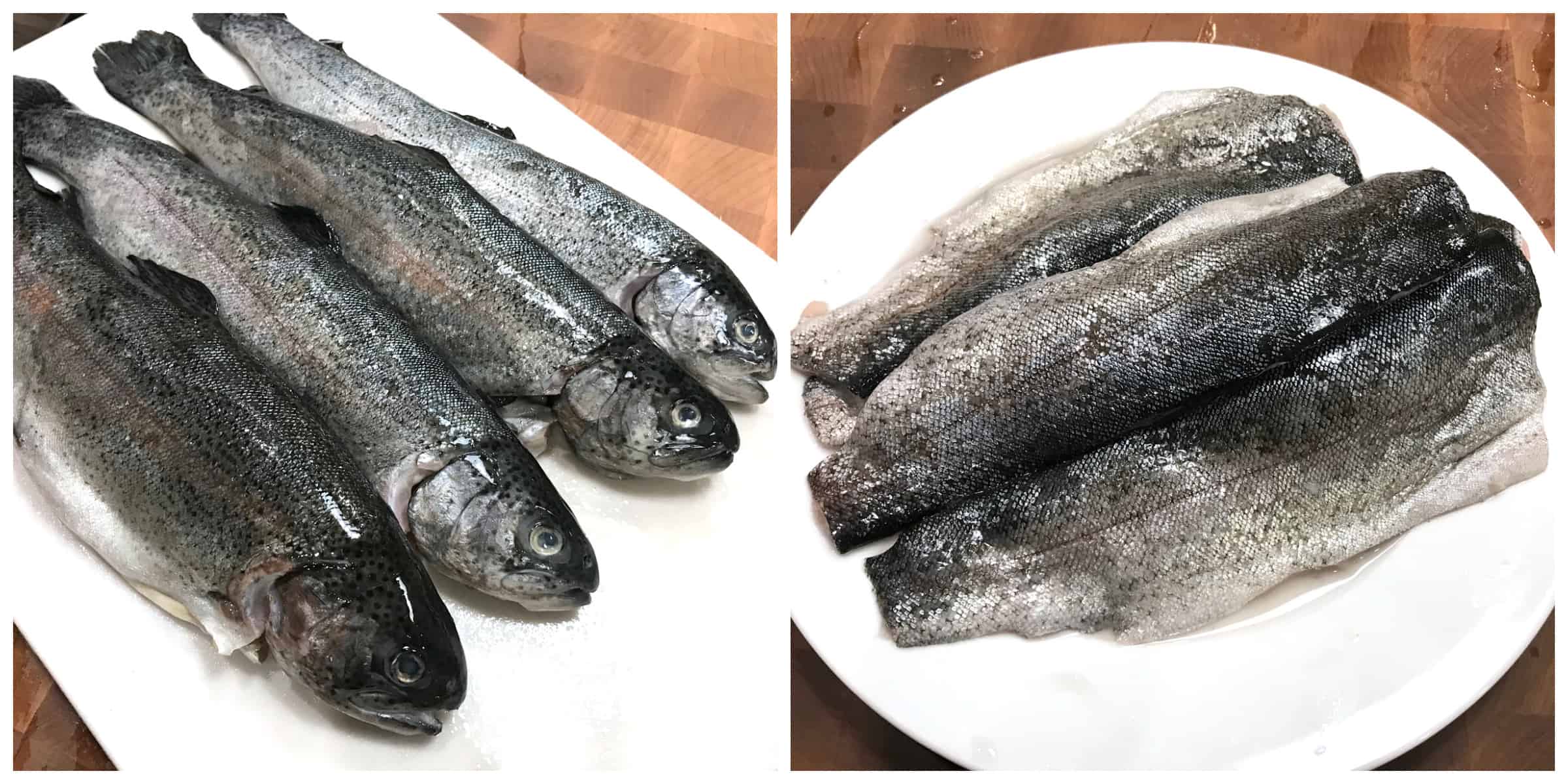 Sprinkle both sides of the fish filets with salt and freshly ground black pepper.

Place the flour in a shallow dish and dredge both sides of the filets in the flour.  Shake off the excess flour. 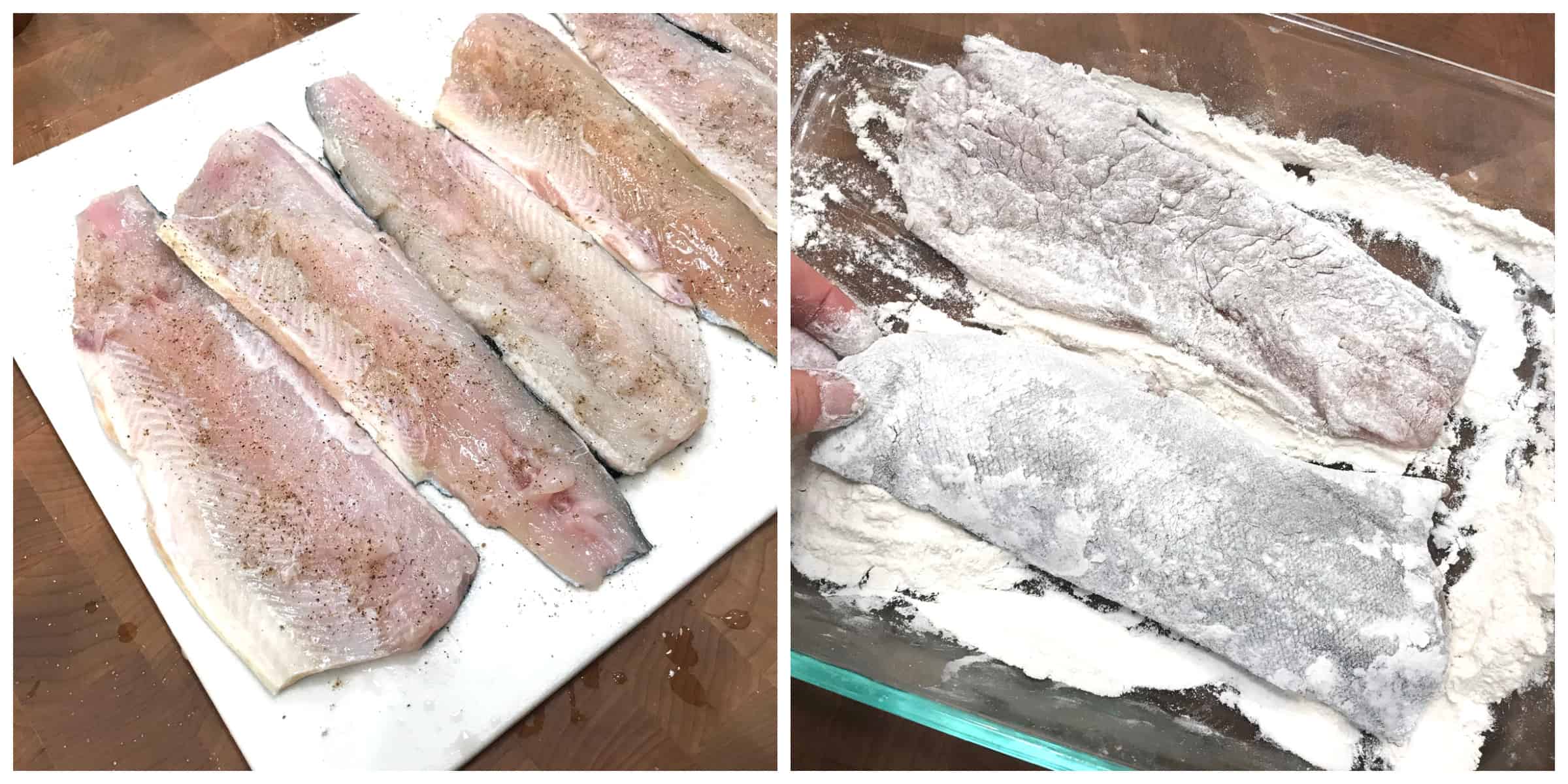 Heat the oil in a non-stick skillet over medium-high heat.  Fry the fish filets, skin side down first, until the skins are generously browned.  Carefully turn the fish filets over and cook the other side until the fish is done (the USDA recommends 145 degrees F. You can also test it by sticking a fork into the thickest part at an angle and give it a gentle twist so you can see into the flesh. Once the fish is opaque and has lost its translucent appearance is done.) Be careful not to overcook the fish or it will be dry.

Transfer the fish to a warm plate and tent with foil while you prepare the sauce. 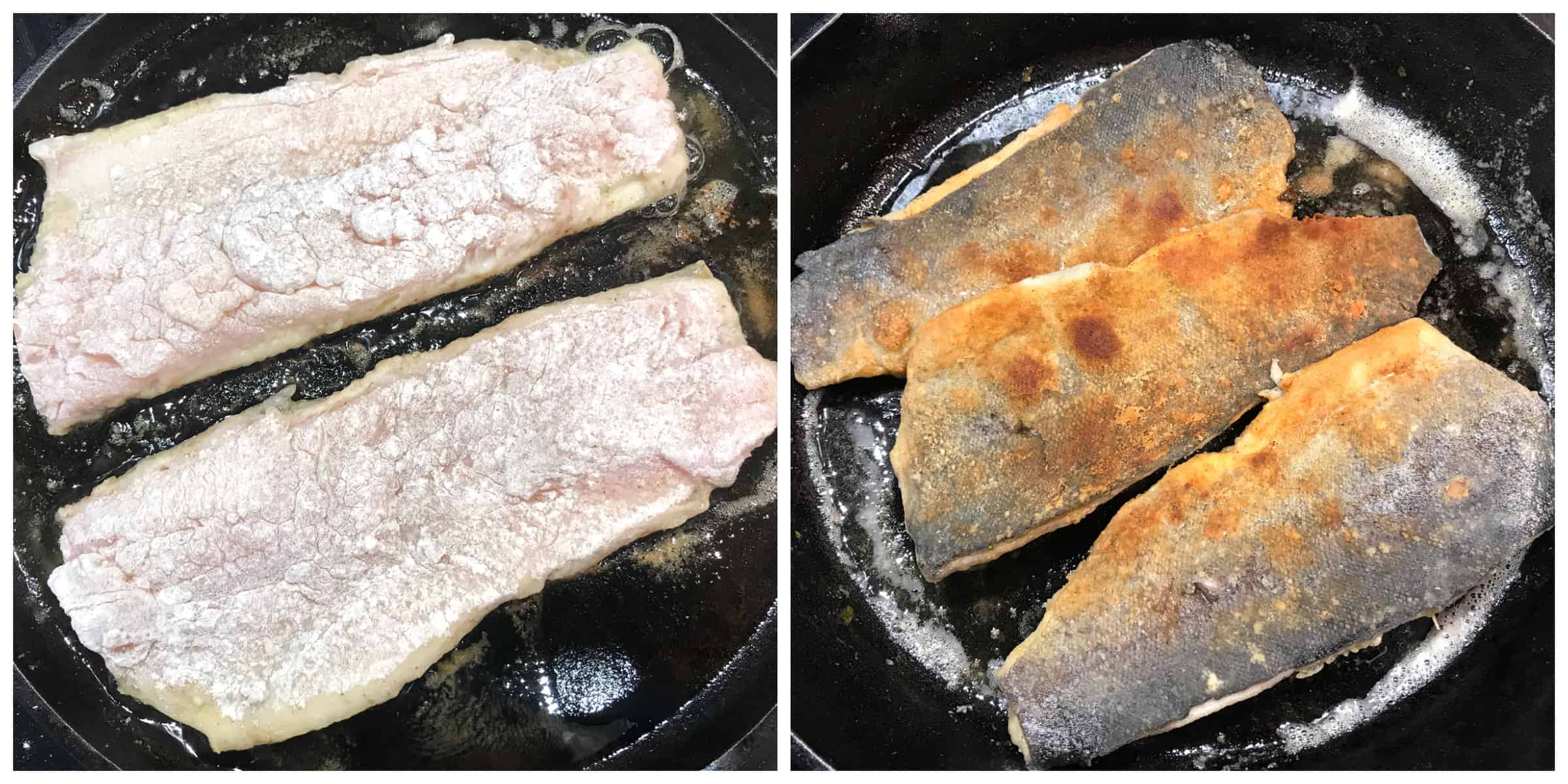 Melt the butter in the same pan.  Stir in the lemon juice. 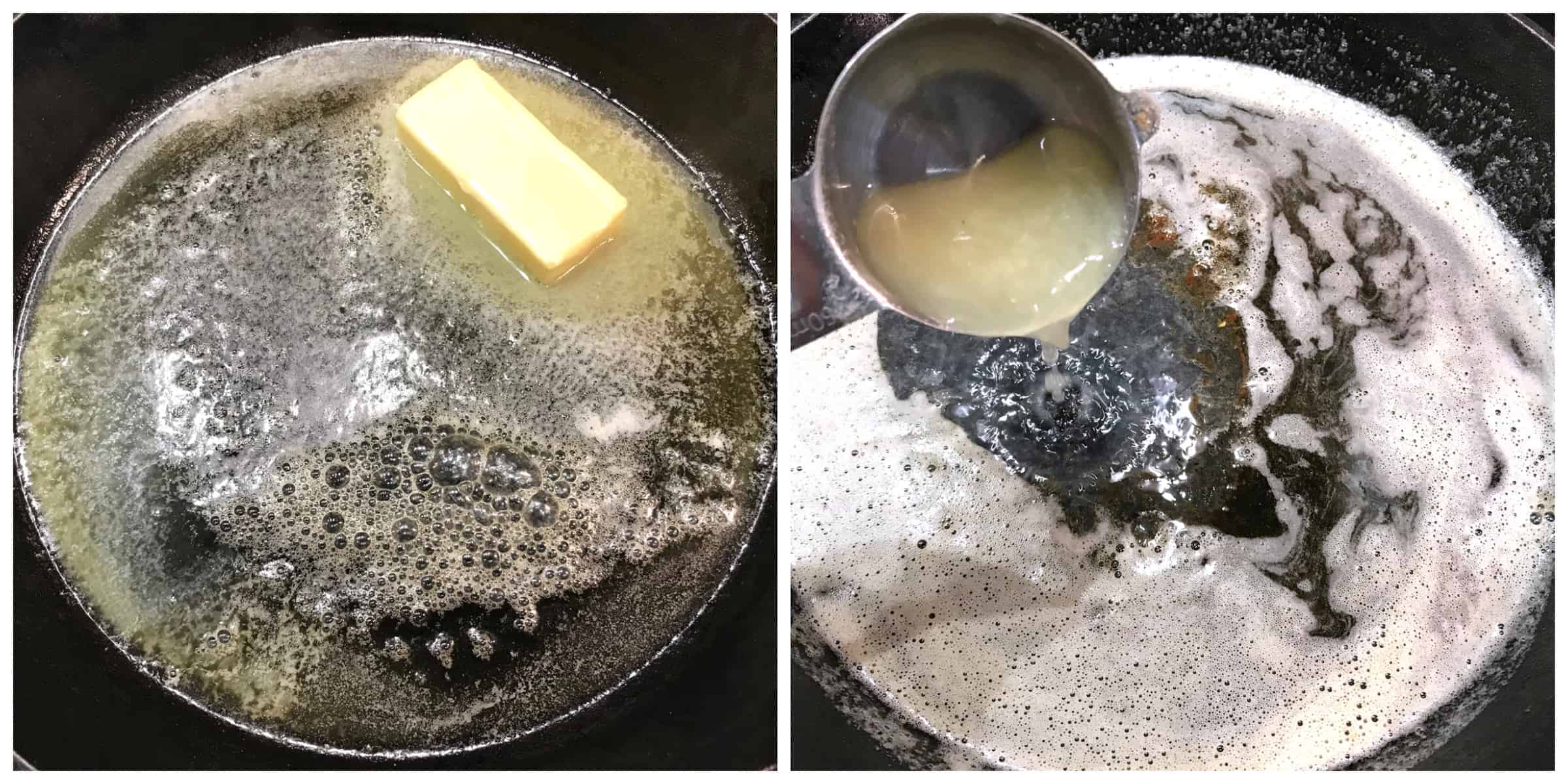 Stir in the parsley and the toasted sliced almonds. 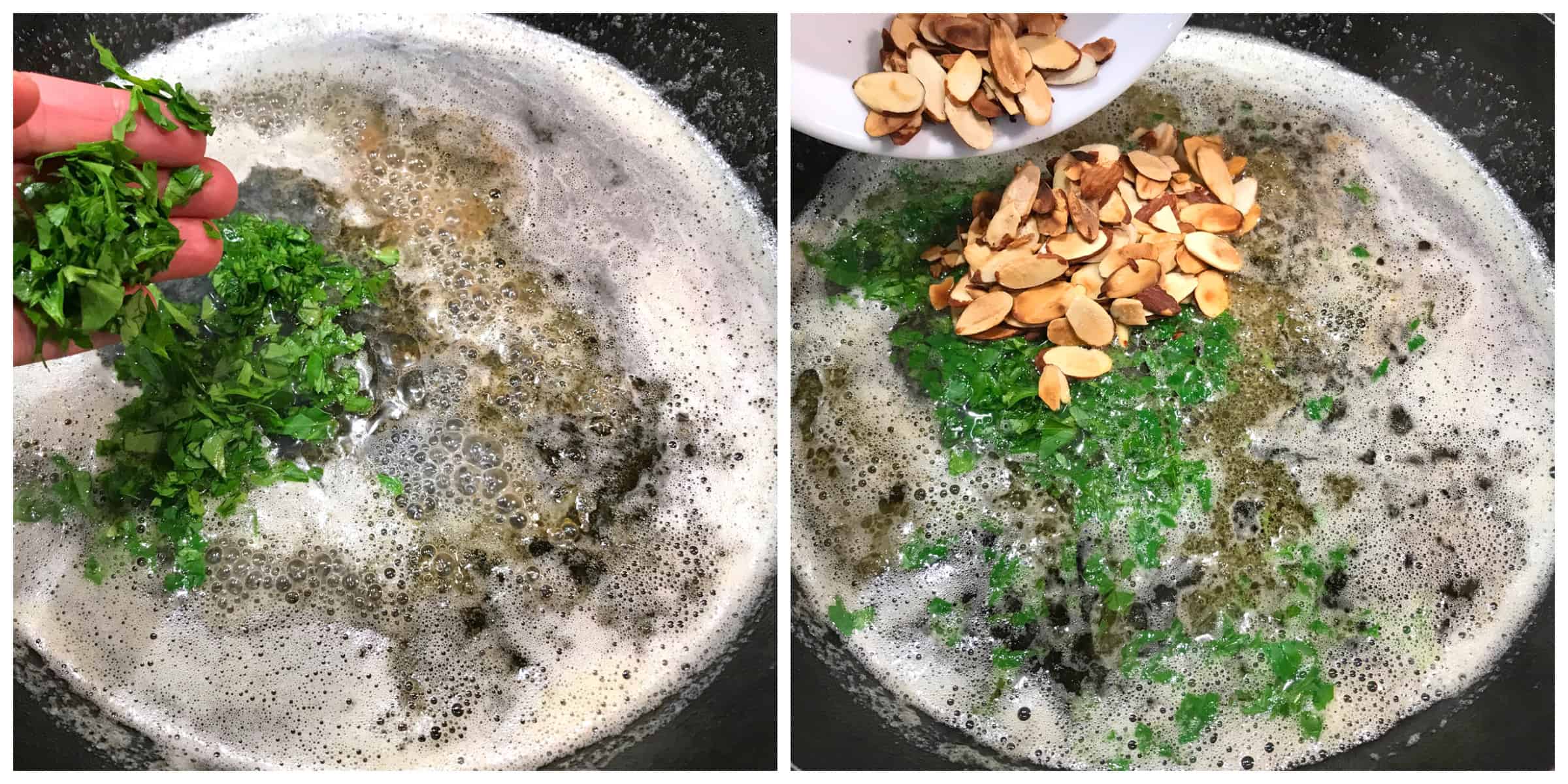 Stir to combine and coat the almonds.  Add salt and pepper to taste.

Place the two trout filets on each plate (or one large filet) and spoon some of the sauce over the filets.

And that’s all there’s to it.  Your five-star meal is ready to serve! 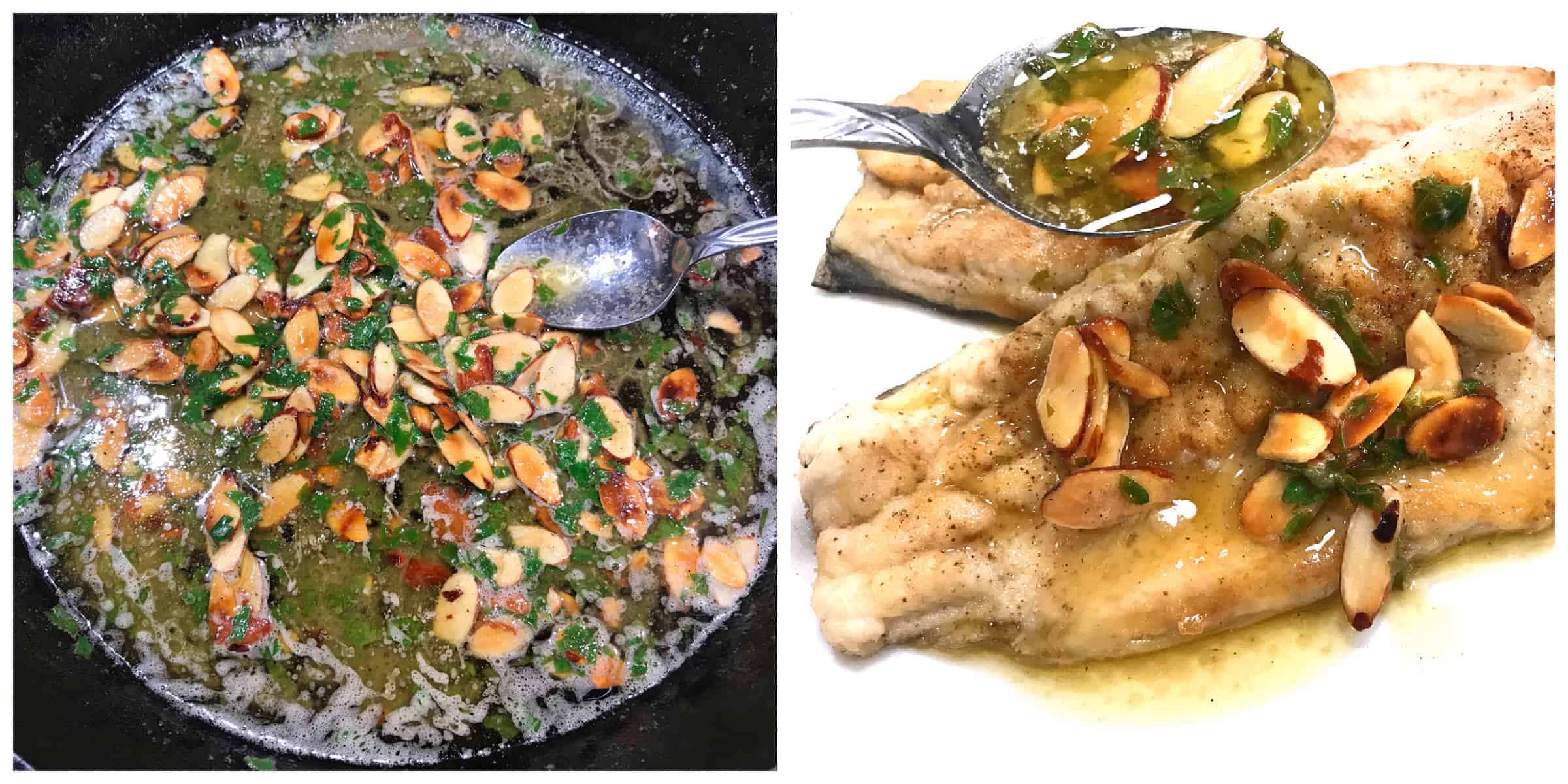 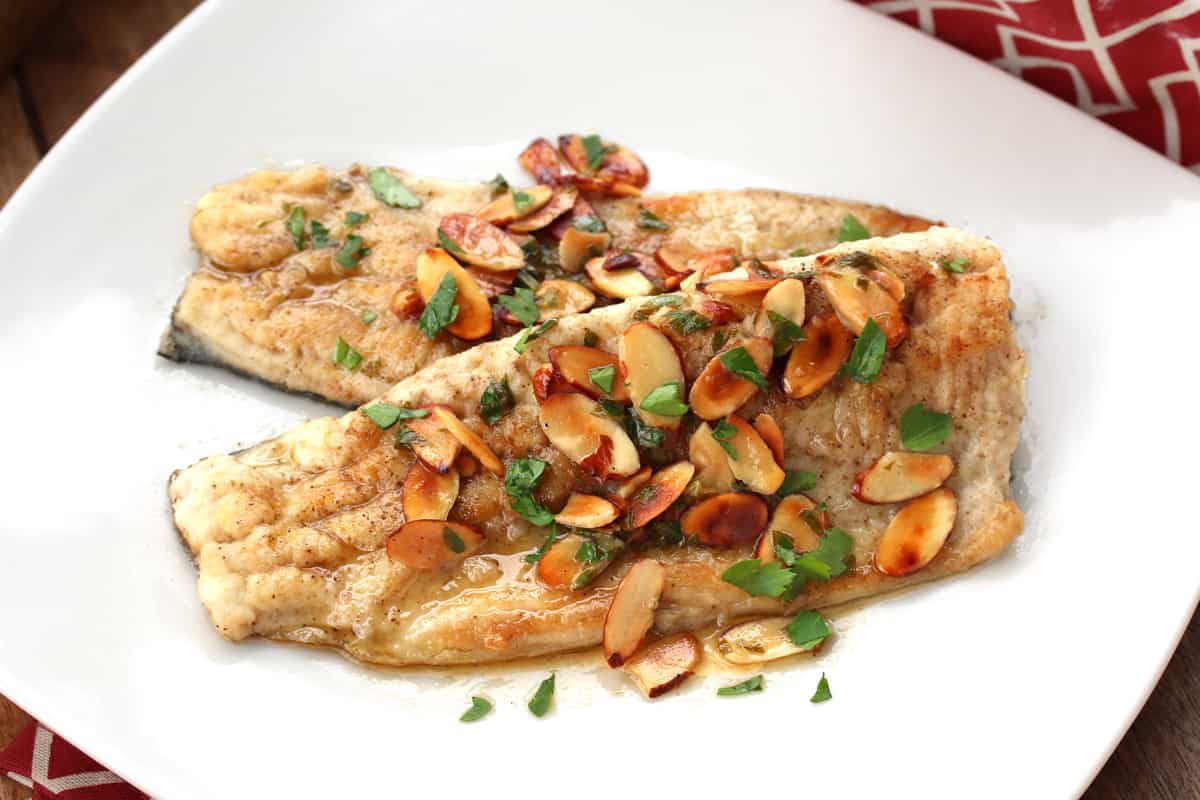 Be sure to try some of our other favorite seafood recipes: 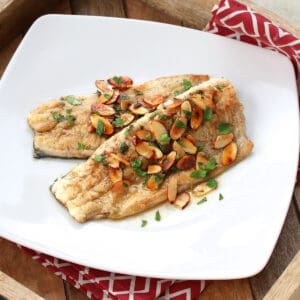