This delicious rhubarb streusel cake is sweet and tangy, super moist, tender, and flavorful and will have you coming back for seconds! 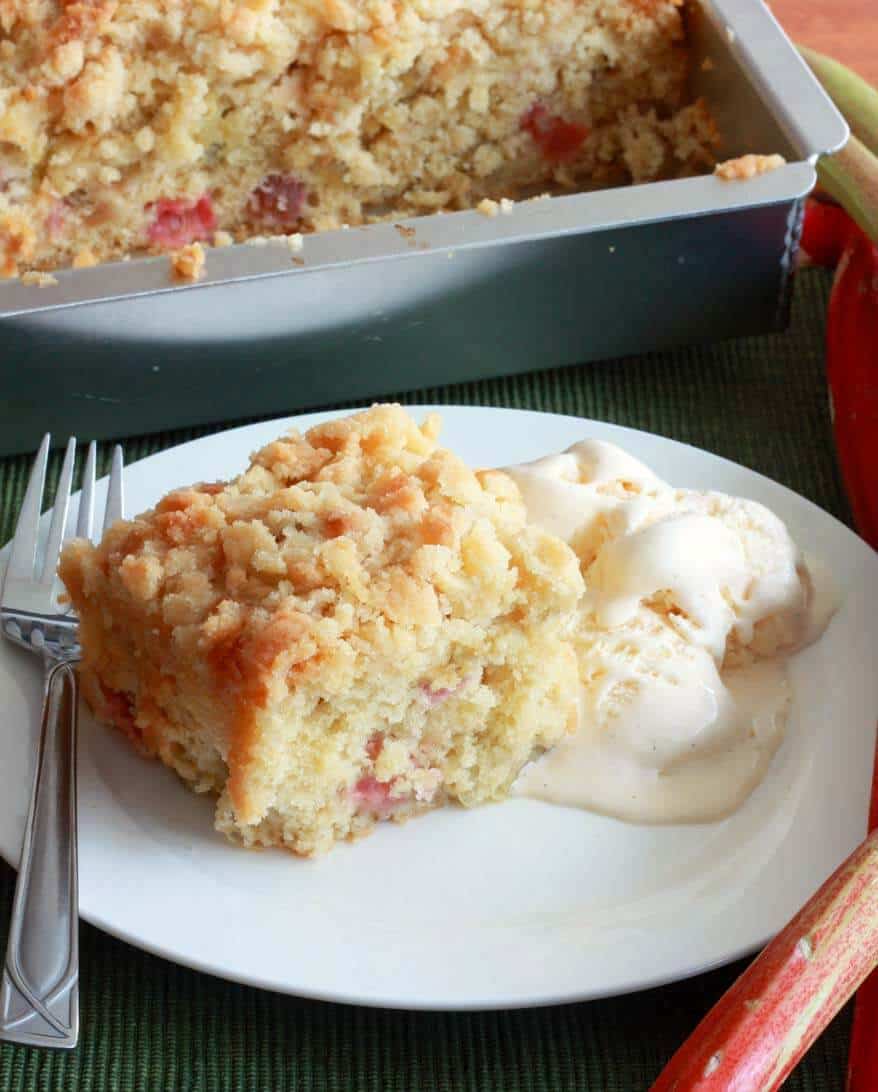 My husband has always claimed he doesn’t care much for cake or rhubarb but he really enjoys diving into this Rhubarb Streusel Cake.  It isn’t overly sweet and the tanginess of the rhubarb provides a nice contrast and balance.  So if you fall into the camp of someone who doesn’t like rhubarb, this cake may change your mind!

Rhubarb goes back a long way.  It has been used in Chinese medicine for thousands of years.  Over the centuries the rhubarb trade increased and in Medieval Europe its value exceeded that of fine spices such as cinnamon and saffron! Rhubarb entered the U.S. in the 1820’s and has been enjoyed in the popular form of pies, crumbles, compote, and preserves ever since.

By the way, did you know that rhubarb is technically a vegetable?  Yet interestingly it was designated as a fruit in the U.S. in a 1947 court ruling for the purposes of regulations and duties.

One last interest tidbit about rhubarb from Wiki:  “In British theater and early radio drama, the words “rhubarb, rhubarb” were repeated for the effect of unintelligible conversation in the background.”  Pretty amusing, huh?

Go grab some rhubarb while it’s still available and make this fantabulous Rhubarb Buttermilk Streusel Cake!  A tender and moist crumb with a delightful buttery streusel topping (which, incidentally, comes from the German verb “streuen,” which means to sprinkle or scatter) .  This cake is truly lovely and it’s easy to make.  Serve it up with some ice cream and you’re all set. 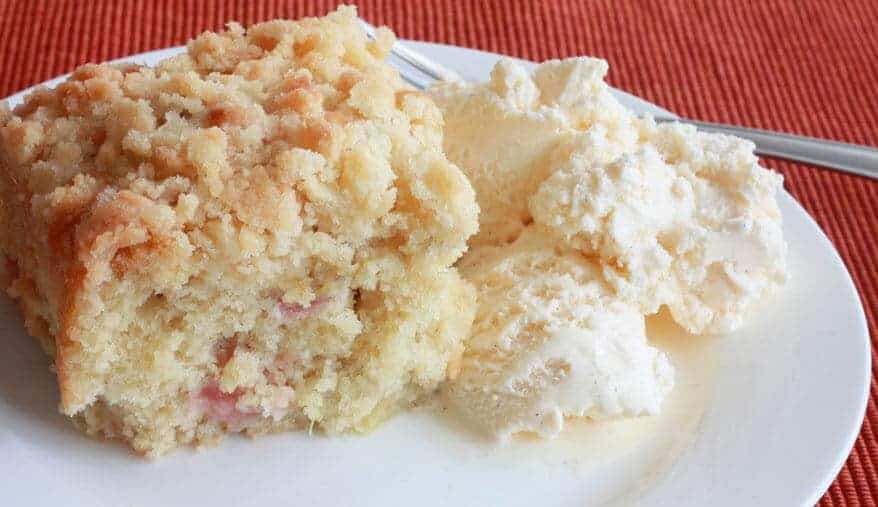 Cream the butter and sugar in large mixing bowl with an electric mixer.

Add the eggs and vanilla extract.  Beat until combined. 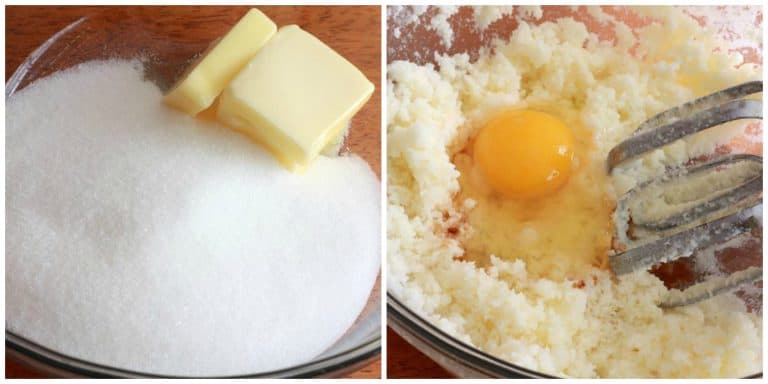 In a separate bowl, combine the flour, baking powder, baking soda, and salt.  Using a rubber spatula, fold in the flour, alternating the flour and buttermilk.

Be careful not to over-stir.  Some lumps of flour will remain, and that’s okay. 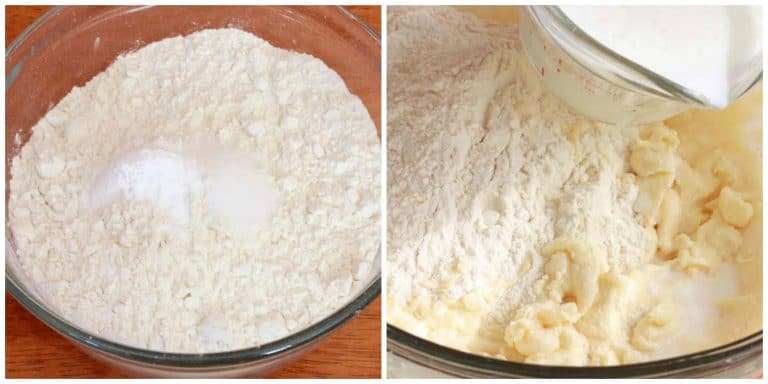 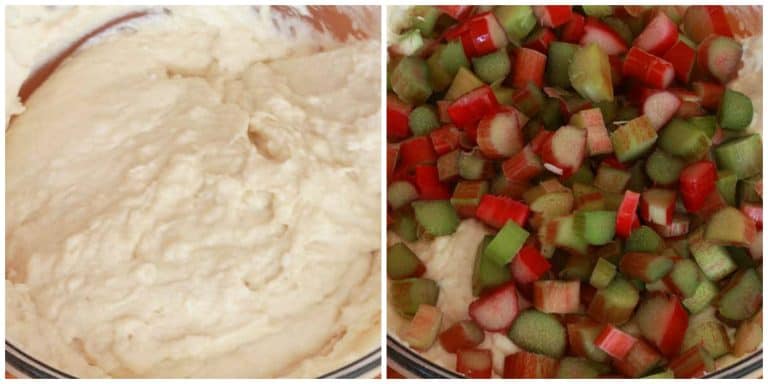 Spread the batter into a greased 8×8 inch square baking pan.  I use the hand-forged aluminum pan by Magic Line, made in the USA.  Love it! 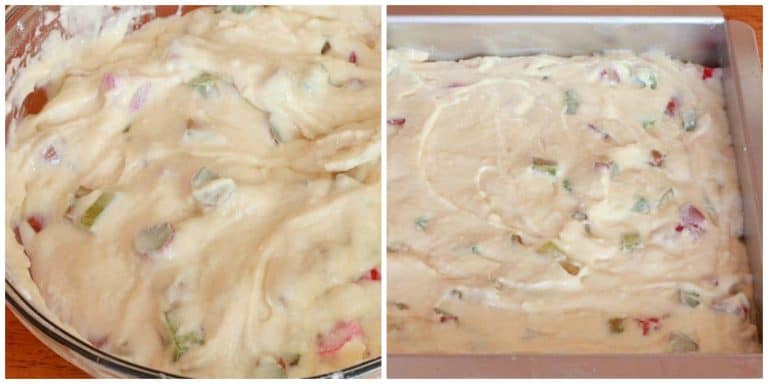 To make the streusel, combine the butter, sugar and flour in a bowl.  Crumb the mixture between your fingers. 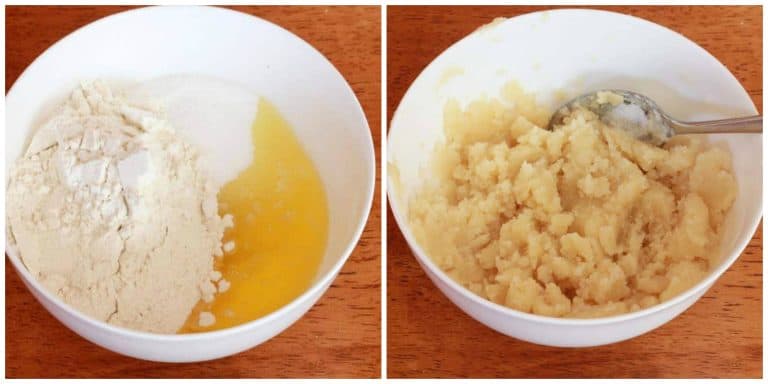 Evenly crumble the streusel over the batter.

Bake in an oven preheated to 350 degrees F for 35-45 minutes or until the streusel is a light golden brown in places and a toothpick inserted into the middle of the cake comes out clean. 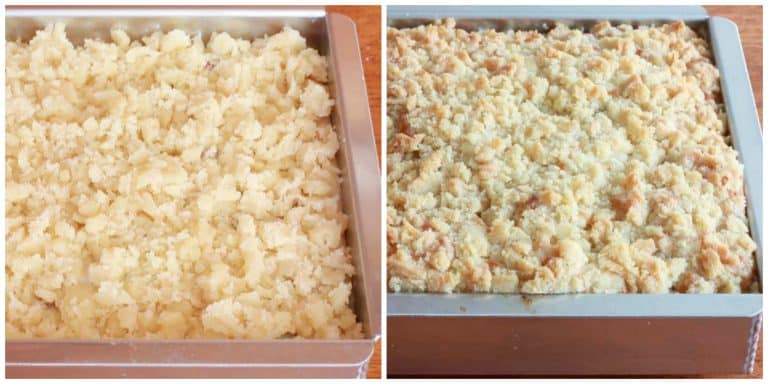 Let the cake cool before slicing it. 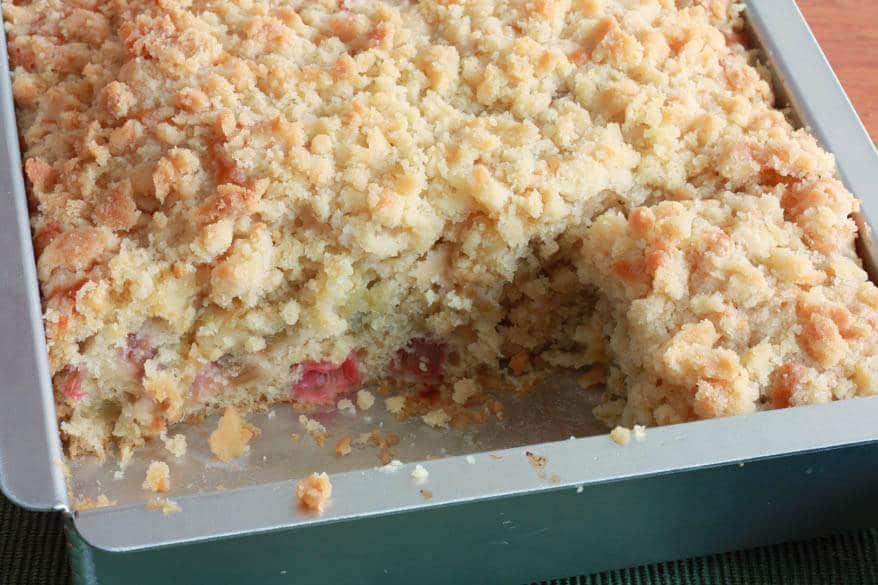 Serve with some ice cream and you’re all set!  Enjoy! 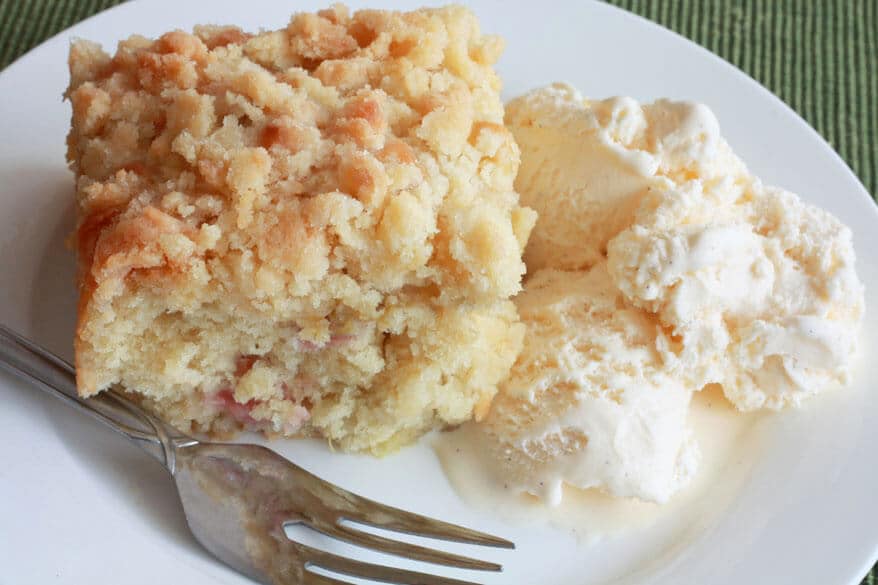 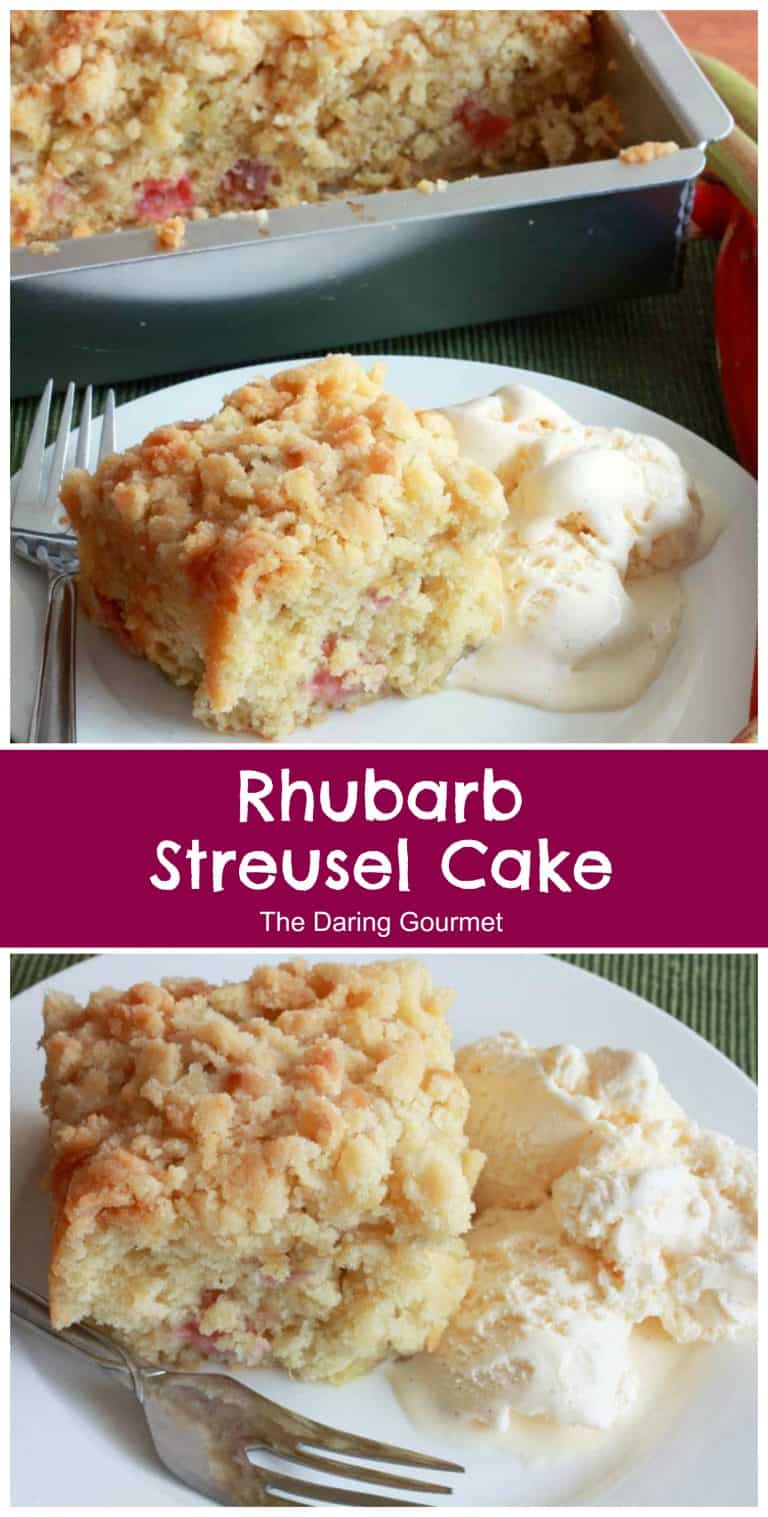 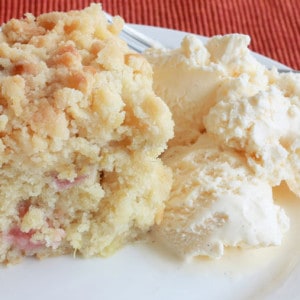