A thoroughly Authentic British Mushy Peas recipe!  The right flavor, the perfect texture, just like you know and love them from your favorite English pub or chippy!

What are fish & chips without mushy peas??  They are inseparable!

Where Did Mushy Peas Originate?

Fried fish & chips as a unified meal is thought to have originated in northern England just outside of Manchester in the mid-1800’s.  To this day the Northerners remain proud of their fish & chip legacy.  And they’re also quite insistent that fish & chips be served with mushy peas, the traditional side for generations.  While most areas throughout Britain offer mushy peas with fish & chips, you could say that in northern England it’s practically sacrilege not to.

When visiting Britain, even Michael Jackson insisted on mushy peas with his fish & chips.  So there you have it.  Inseparable.

Besides being the fish-and-chip-and-mushy-peas champion, Northern England is home to breathtaking landscapes, stunning historic cities and beautiful villages.  And I can’t talk about British food without talking about the country, so let’s take a brief tour.

A Brief Tour of a Beautiful Northern English City

One of my many favorite places in northern England is the city of Chester, which borders the northeast part of Wales.  I have ancestors from all over Great Britain including numerous parts of England, Scotland and Wales.  But my most recent ancestors, my great grandparents on my father’s side, come from Wales on one side of the family and from Cheshire, England (home of Chester) on the other.

Chester was originally founded as a Roman fort in 79 AD and later became a major civilian settlement.  It was 20% larger than any other fortress built at the time and historians speculate that Chester, not London, was meant to become the Roman capital in Britain.  A particularly powerful fortress, Chester was one of the last cities in England to fall to the Normans.

Chester remains one of the best preserved walled cities in all of Britain and features a number of medieval buildings.  During the years I lived in England, Chester was one of my favorite cities to visit.  It’s a remarkable and unique city with a gorgeous town center and stunning cathedral. 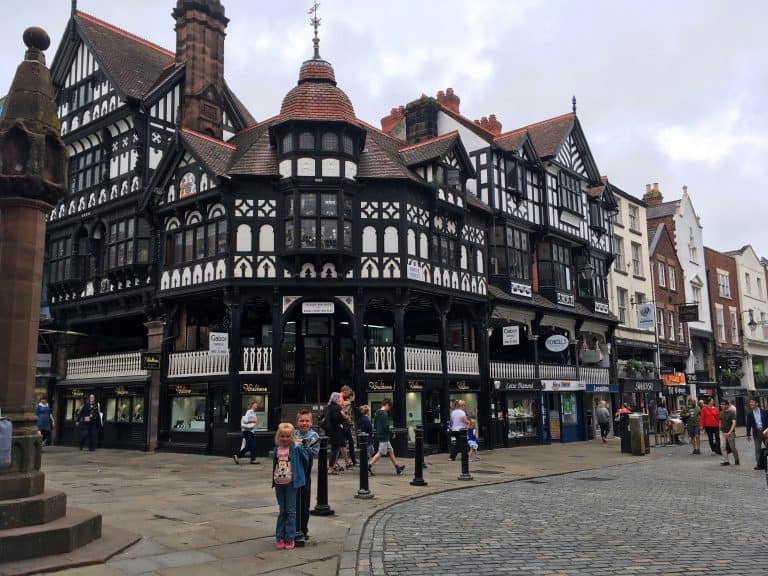 On a side note, Chester also used to have the world’s best fudge shop and you could sample the most wonderful, creative flavors of fudge while watching the fudge makers at work.  We were there this past May and it was gone!  Replaced by some good-but-not-nearly-as-good fudge chain store :(

And Chester even still has an official Town Crier – our kids are posing with him below. 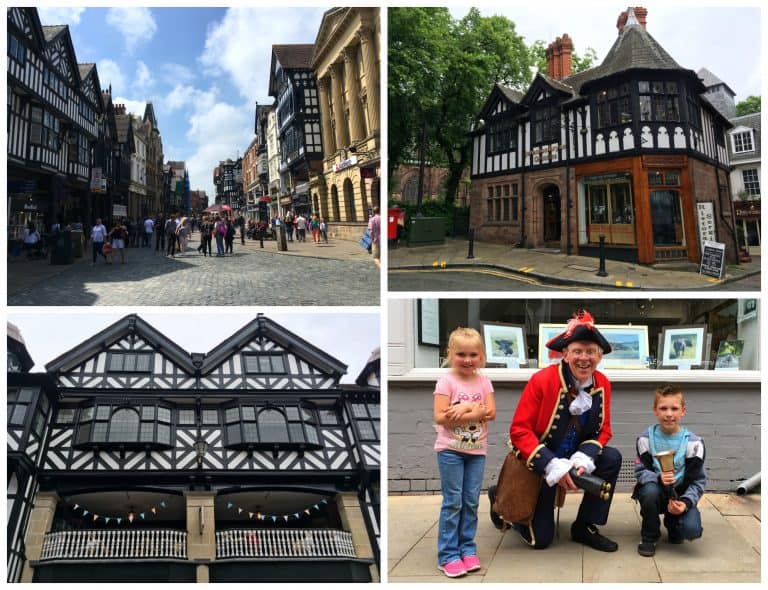 The Chester cathedral is stunning.  The building of it began around 1093 AD and the process continued over several centuries with modifications and additions made over time.  As a result its construction incorporates every major style of English medieval architecture.  The cathedral is still in use for worship services and aside from being a major tourist attraction it also hosts concerts and exhibitions. 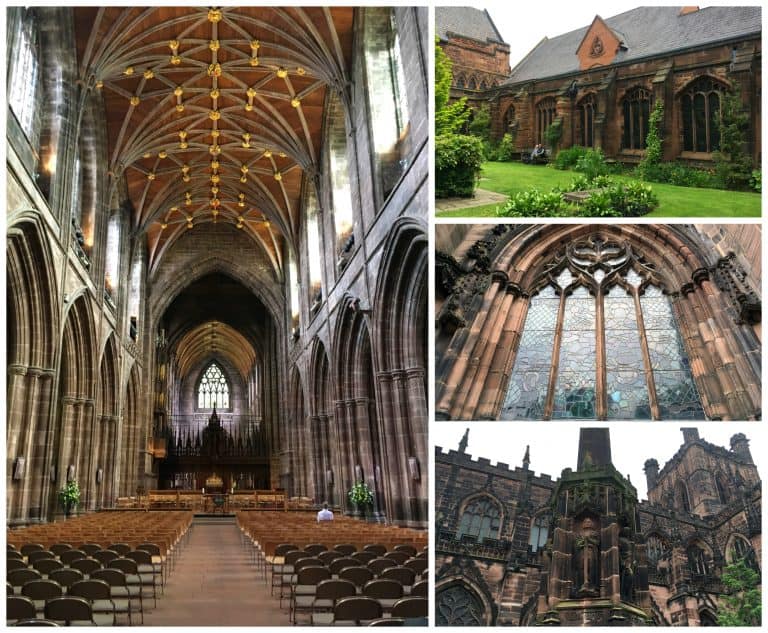 And circling back to our original topic of FOOD, should you ever order fish & chips at a chippy in Chester (that’s a tongue-twister!), you can be sure they’ll have mushy peas!

So let’s talk about how to make authentic mushy peas.  Most recipes you’ll find online improvise using fresh English peas or frozen peas and there are cooks in southern England that do the same.   Friends, those are completely the wrong peas.  Ask any Northerner and they’ll tell you that mushy peas must be made with marrowfat peas.

What Are Marrowfat Peas?

Marrowfat peas are mature green peas that have been deliberately left to dry out naturally in the field rather than being picked while they’re young like regular garden peas.  Marrowfat peas are what are traditionally used to make English Mushy Peas and they’re also the variety of pea used to make wasabi peas.  They much larger than regular peas and have a particularly high starch content.  This creates a very different consistency to mushy peas than regular peas will.  Cooked into Mushy Peas, marrowfat peas will give you a smoother, creamier consistency.

They’ll give you both a significantly different flavor and texture than regular peas and if you’re interested in making authentic mushy peas – the real deal – it will be worthy your time to hunt down the right peas.

Where Can You Buy Marrowfat Peas?

Unless you live in Great Britain, they’re hard to find.  I stock up on them when I go to England but fortunately you can also find them online.  You can buy genuine British marrowfat peas on Amazon.  Bachelor’s is probably the best-known brand of marrowfat peas.

Amazon recently added another brand that claims to be marrowfat peas in a larger volume at a better value but I haven’t tried these ones and cannot vouch for their authenticity. 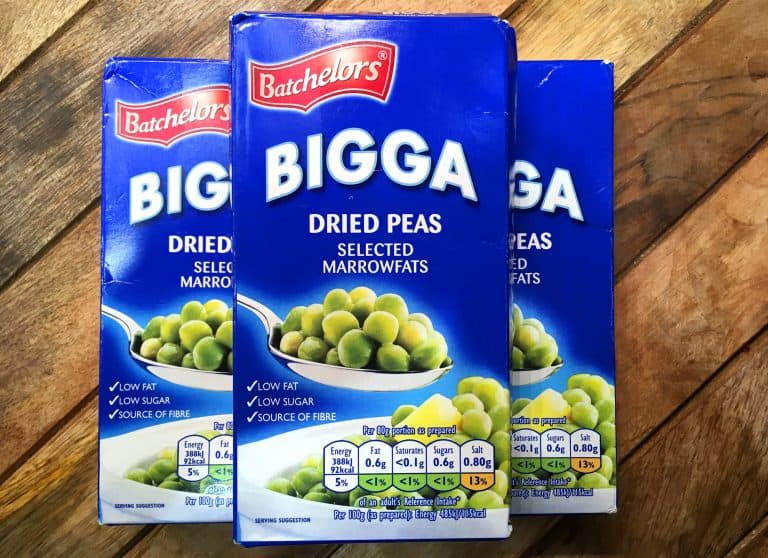 Again, if you want to make authentic mushy peas like the way they’re served at pubs and fish & chip shops throughout Britain, with the right flavor and right texture, be sure to use marrowfat peas.

The other key to making authentic mushy peas is to avoid embellishments.  Mushy peas are simple:  Marrowfat peas, baking soda (for softening), water and salt.  That’s it!  They’ll taste just like you remember them.

A really good fish & chip shop knows they don’t have to try and win you over by artificially making their peas look prettier.  Good mushy peas speak for themselves the moment you taste them.

How to Make Mushy Peas

Dissolve the baking soda in boiling water.  Place the dried marrowfat peas in a bowl and pour the boiling water over them so they’re covered by at least 3 inches of water.  Give the peas a stir then leave them to soak for at least 12 hours.

Drain and rinse the peas and place them in a pot with about 3 cups of water.  Bring to a boil, cover, reduce the heat to medium-low, and simmer for about 30 minutes, stirring occasionally, or until the desired consistency is reached.  Note:  How long you have to simmer the peas will depend on the particular crop and the age of the peas.

If it seems like it’s taking them forever to soften up, don’t worry, the peas will begin to break down within a few minutes (photo bottom right). 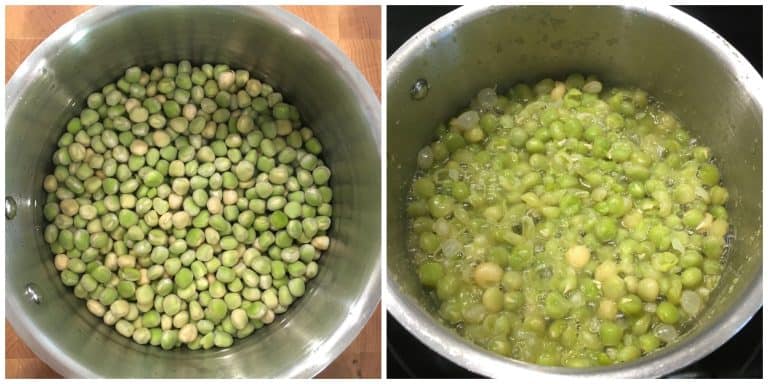 Once the peas have fully broken down add the salt.

Once the peas are done they will start to thicken the longer they sit.  If reheating them later or the next day, add a little more water. 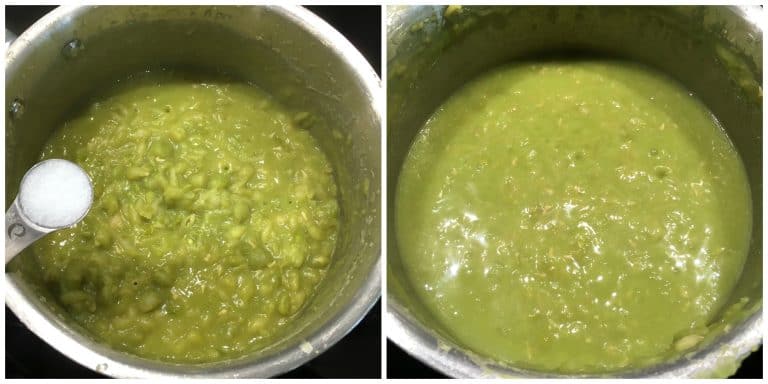 Serve these mushy peas with British Fish and Chips or traditional meat pies. 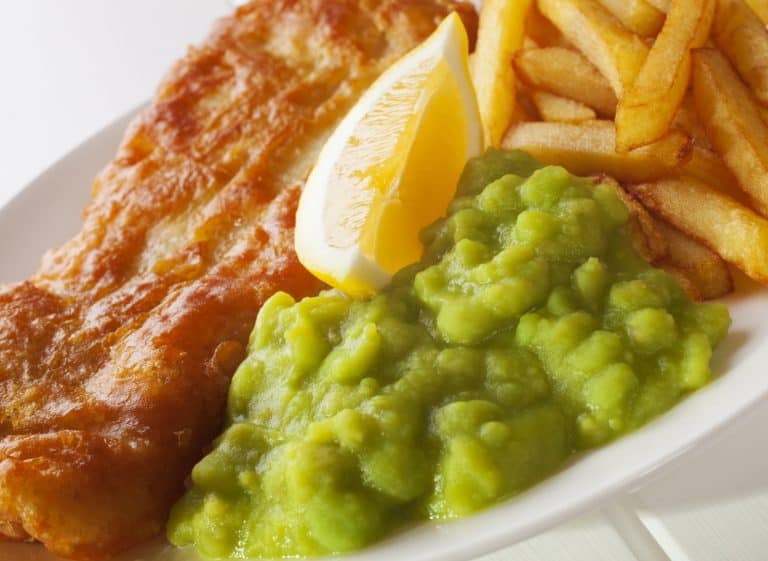 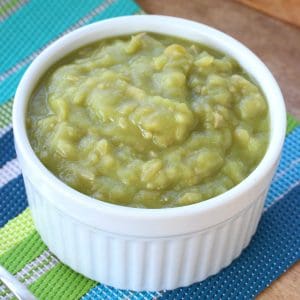