A quintessential British dish, Toad in the Hole is comprised of roasted sausages enveloped in a giant, deliciously crispy Yorkshire pudding and served drizzled with onion gravy.  Next to Bangers and Mash it’s hard to imagine better comfort food! 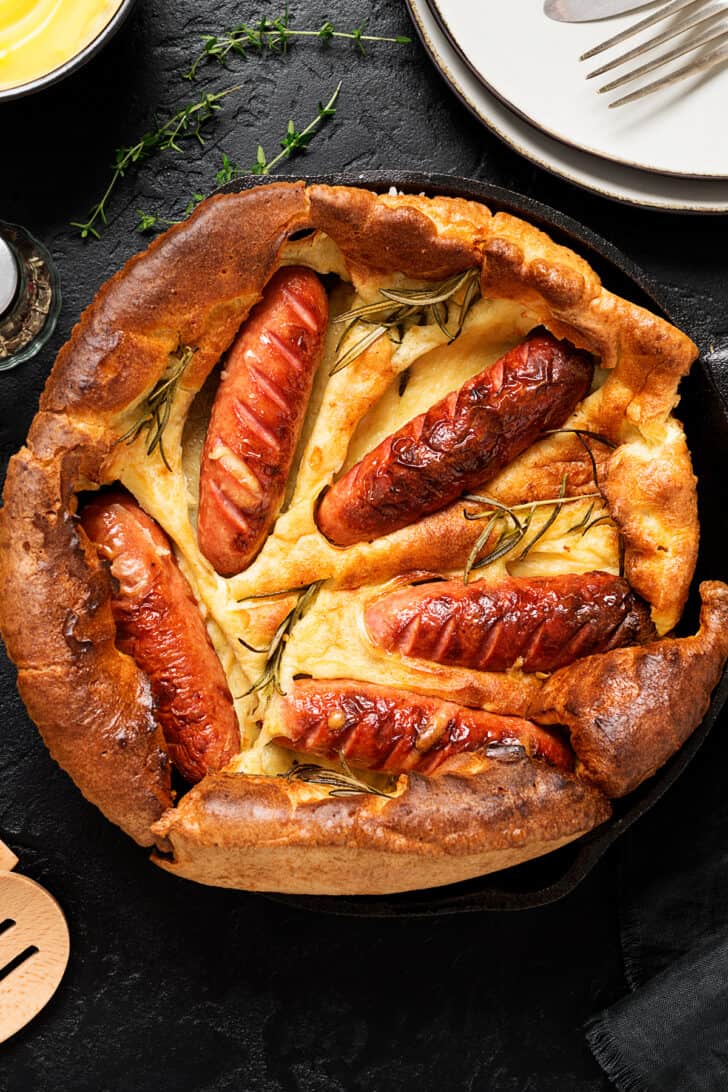 Where Did Toad in the Hole Originate?

The origin of its name is unclear and debated but it certainly is an interesting one!  Some have suggested it’s because the sausages resemble a toad sticking its head out of a hole.  What we do know is that it has been around since at least the mid 1700’s.  It was noted that virtually anything could be baked up and disguised in this big Yorkshire pudding.  The idea was clever and served as an ideal way to use up leftovers and tougher scraps of meat that would otherwise have been thrown away, though fine cuts of beef were also used and served in pubs and at home.  Nevertheless, the upper crust of old English society snubbed and reviled the dish, considering it vulgar, uncivilized, and an affront to British cuisine!

It wasn’t until the advent of the industrial revolution of the 19th century, when such values as frugality and time-management dominated, that toad-in-the-hole garnered respect as a working man’s dish and would join the ranks of other traditional English dishes that we enjoy today. 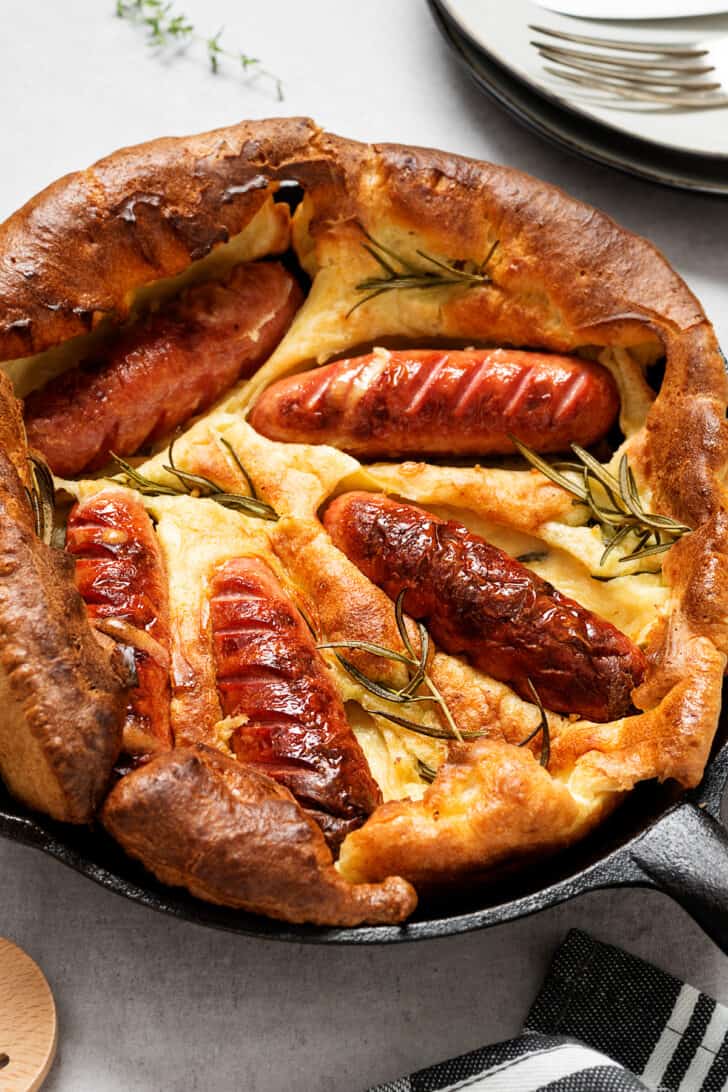 As noted by the author of Homo Gastronomicus, “Along with ‘bubble and squeak’ and ‘angels on horseback’ it captures that sense of playful eccentricity associated with British cuisine that we’ve all come to love.  Indeed, the innocent referentiality of the name – “toad-in-a-hole” – evokes that syrupy Dickensian nostalgia for the good old days, when kids still played together in the garden and before our imaginations were stifled by the bottom-line.  [Toad-in-the-hole] is your protein and your carb-heavy side rolled into one, baked to perfection, and doused in gravy.  It requires only one plate, and there’s virtually always extra enough for a second helping.  What’s not to love?” 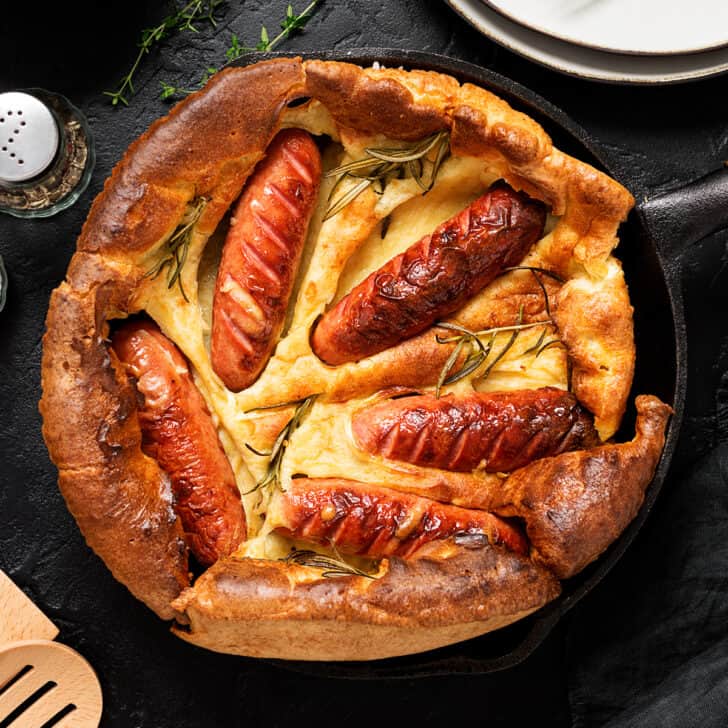 Toad in the Hole Recipe

This toad in the hole recipe can be prepared in either a casserole dish or a cast iron skillet, whichever you prefer.

Prepare the batter first as it needs to sit for at least 30 minutes at room temperature:

Combine the flour and mustard powder in a mixing bowl.  Traditionally, the batter is cooked with beef drippings added to the casserole dish.  As you likely don’t keep those on hand, we’re going to cheat and just add a little powdered beef bouillon instead of salt.

Add the eggs and milk and whisk for several minutes until the batter is perfectly smooth and airy.  Let is sit for at least 30 minutes at room temperature before using. 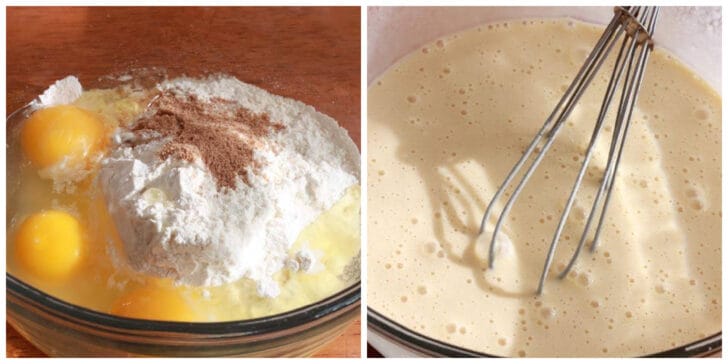 While the batter is sitting prepare the sausages.

British bangers are ideal.  Made with pork, mild seasonings, onions, and breadcrumbs, their texture and flavor is marvelous. Check with your local butcher.  If you can’t find bangers, use any other good quality sausages in casings.  Alternatively, you can try your hand at making your very own homemade British bangers from scratch!

Preheat the oven to 400 degrees F.  Rub the sausages with extra virgin olive oil and place them in a medium-sized, greased, casserole dish (about 8×11 or so) or 12-inch cast iron skillet.  Be sure to grease the sides to prevent the batter from sticking later on.  Roast the sausages uncovered for about 10 minutes on each side or until nice and browned.

Pull those that sizzling hot casserole dish/cast iron skillet out of the oven (be careful!).  Do not drain the grease from the sausages  – it is traditionally left to contribute to the flavor and texture of the batter. 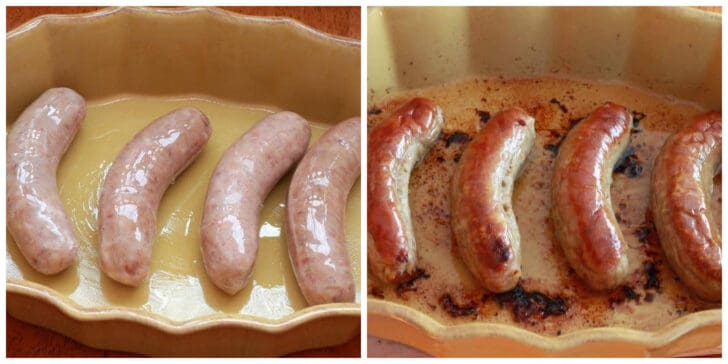 Immediately pour the batter over the sausages.   Sprinkle the fresh herbs over the top.

Increase the oven temperature to 450 degrees F and bake for about 15-20 minutes or until the pudding has risen and is browned.

Reduce the temperature to 350 degrees F and bake for another 10 minutes or until the center is cooked through. (DO NOT OPEN THE OVEN during the first 20 minutes or the batter will not rise properly.) 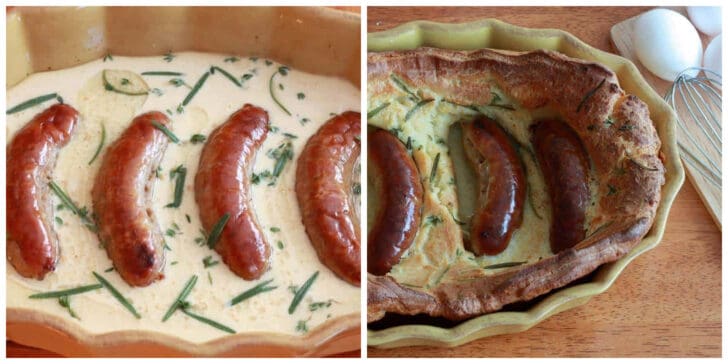 Remove from the oven and serve immediately with our delicious homemade onion gravy and your choice of vegetable. 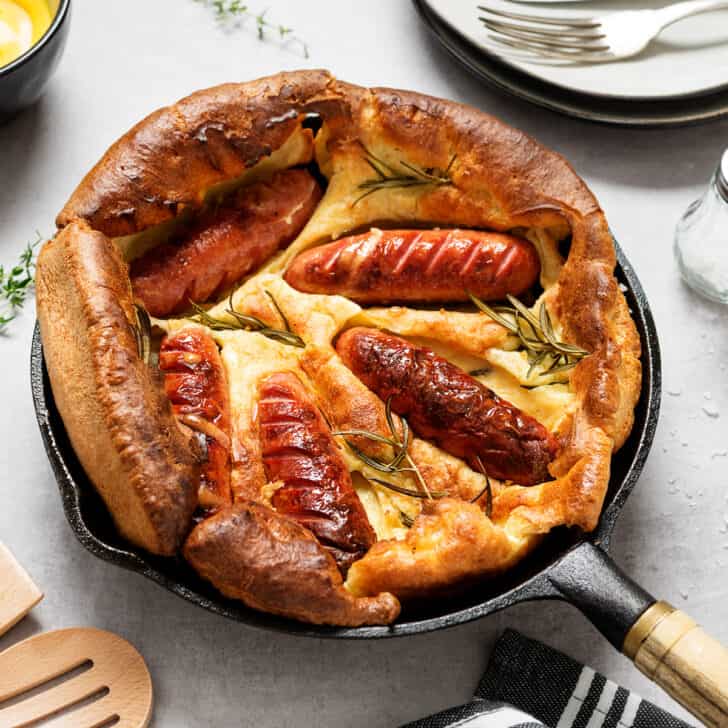 For more delicious British recipes be sure to try our: 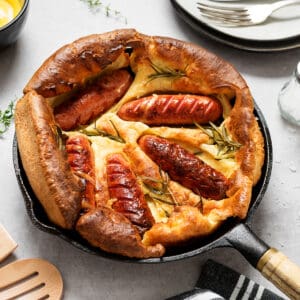 Traditional Toad in the Hole 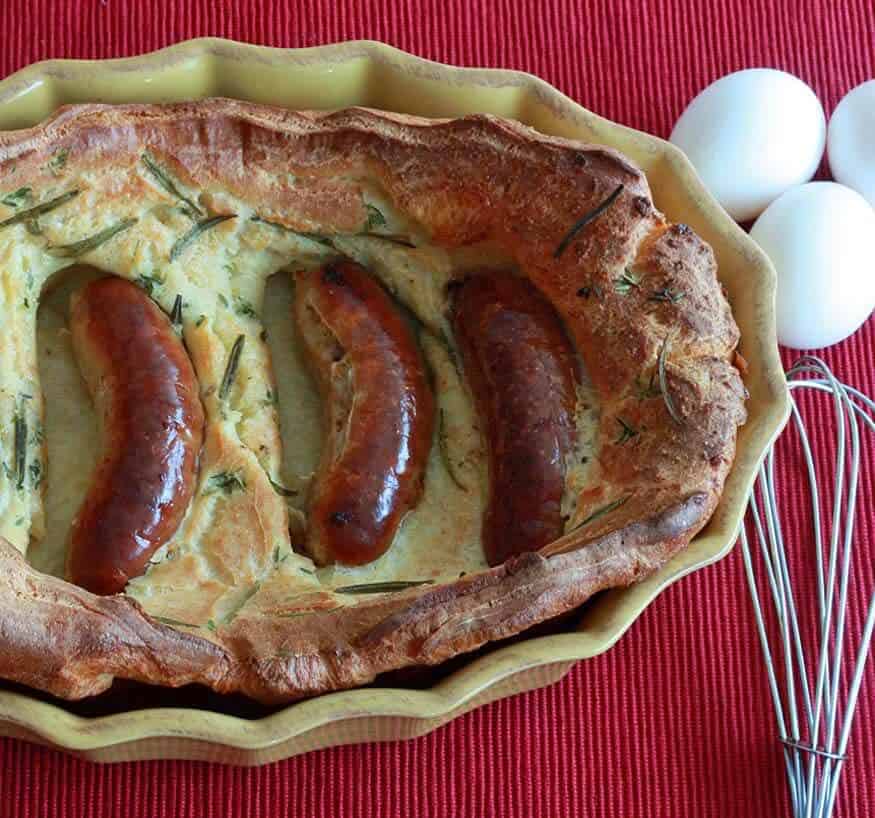