Hachee is a traditional beef and onion stew found in virtually every Dutch home.  It’s a delicious comfort dish to enjoy during the cold winter months.  The long, slow cooking time produce super tender meat and a rich sauce with wonderful depth of flavor. Here is an authentic hachee recipe that your whole family will love! 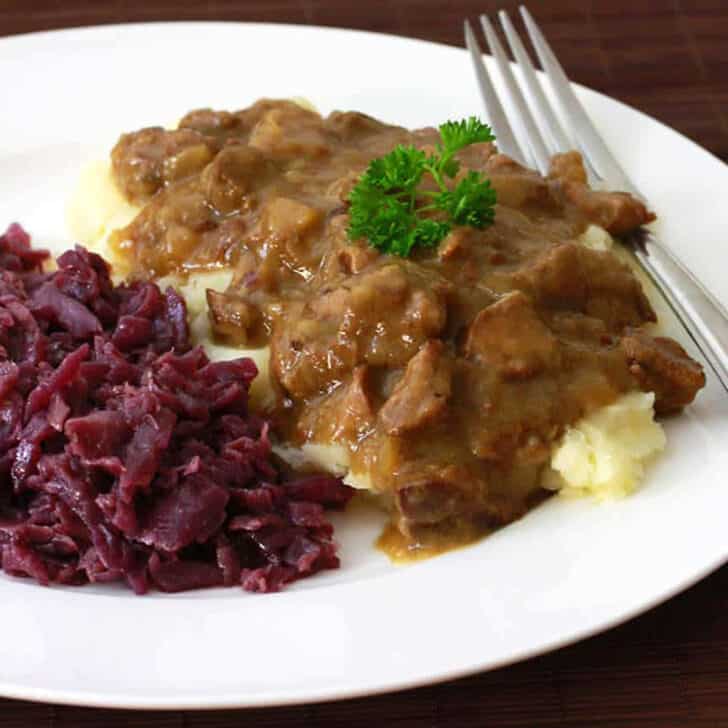 The word hachee has its origins in the French hacher, meaning “to chop” and Hachee is sometimes referred to as a “hash.”  Hachee has been around since the middle ages and like many of the traditional dishes of Europe that we know and love today, it was originally a peasant dish, created as a means of using up leftover meat and vegetables.  The vinegar was used to tenderize tough pieces of meat (much like French peasants used wine).  Less expensive vegetables likes onions were used in generous amounts.  A long cooking process further ensured the meat would be tender.  Hachee remains a popular and much-loved dish in the Netherlands.  So much so that you can find it ready-made in grocery stores.  But nothing beats homemade, and your patience in the long, slow cooking process will yield results that will make your taste buds swoon.

The flavor profile of Hachee is significantly different from the traditional beef stews we know here in the U.S.. Hachee uses equal parts of beef and onion and the onions are caramelized.  The featured flavors in this stew are cloves, juniper berries, black peppercorns, bay leaves and vinegar – all of which come together to provide a wonderful depth of flavor that is both rich and comforting.  The flavor of Hachee shares similarities with German Sauerbraten. 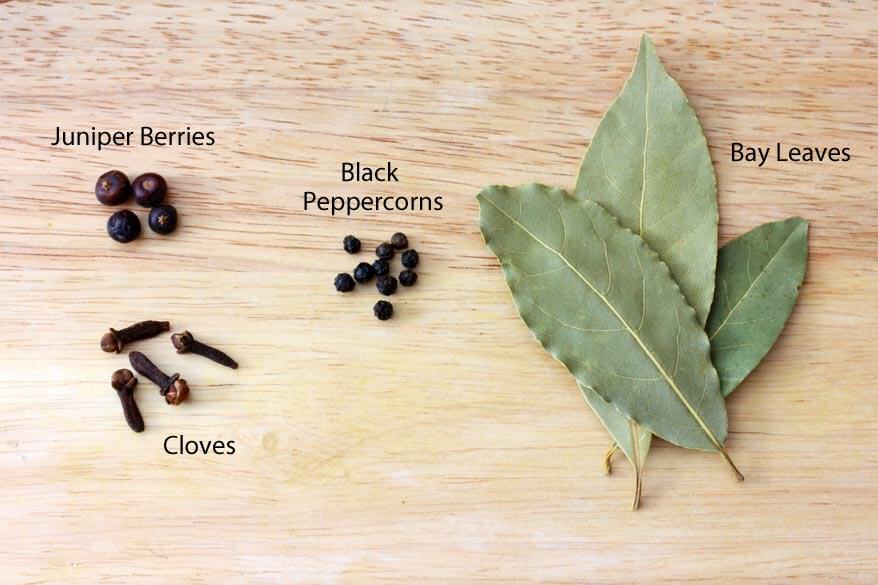 I made this last week when my husband’s family came to WA for a visit.  My father-in-law lived in the Netherlands for two years as a young man and fell in love with the country, its people, and its food.  Many of the dishes he enjoyed then he hasn’t had since – almost 40 years later – a fact he often laments.  (Sorry for alluding to your age, John.)  So I wanted to surprise him with a traditional Dutch meal.  I narrowed it down to three options:  Boerenkool Stampot, Hutspot, and Hachee.  I decided on Hachee.  It’s a little more interesting, plus you can’t find the smoked Dutch sausages (rookworst) here that are traditionally eaten with the other two dishes.  And it also gave me the excuse to finally make the braised red cabbage with it – a side dish that is equally popular in Germany (Rotkohl) and that several of my readers have asked me about.  My father-in-law readily recognized the dish.  “This is the dish I had almost every night during my first two months in the Netherlands!”  And he hadn’t had it since until now.  We all really enjoyed this Hachee. And the leftovers the next day, after the flavors had even more time to meld, were even better.

Cube the beef and pat it dry with a paper towel – this will ensure that it browns well.  Sprinkle with a little salt and pepper. 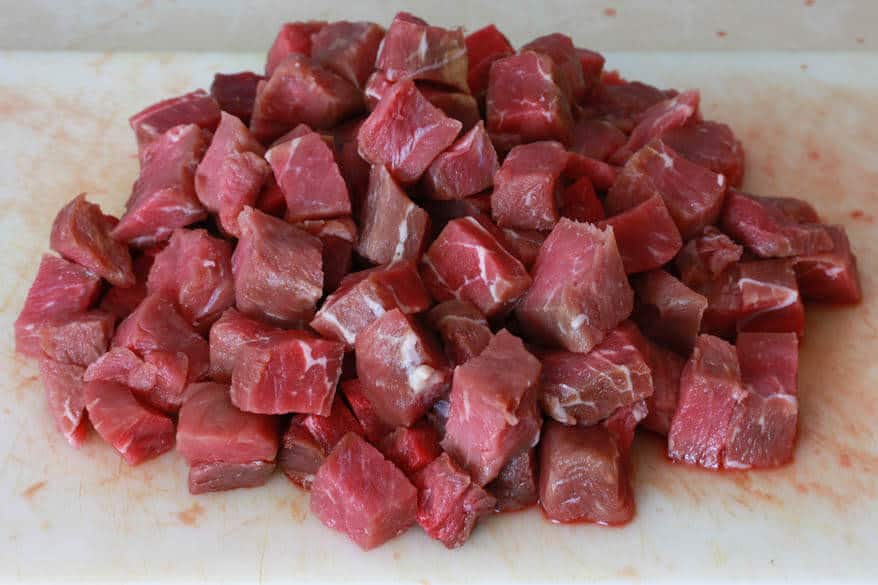 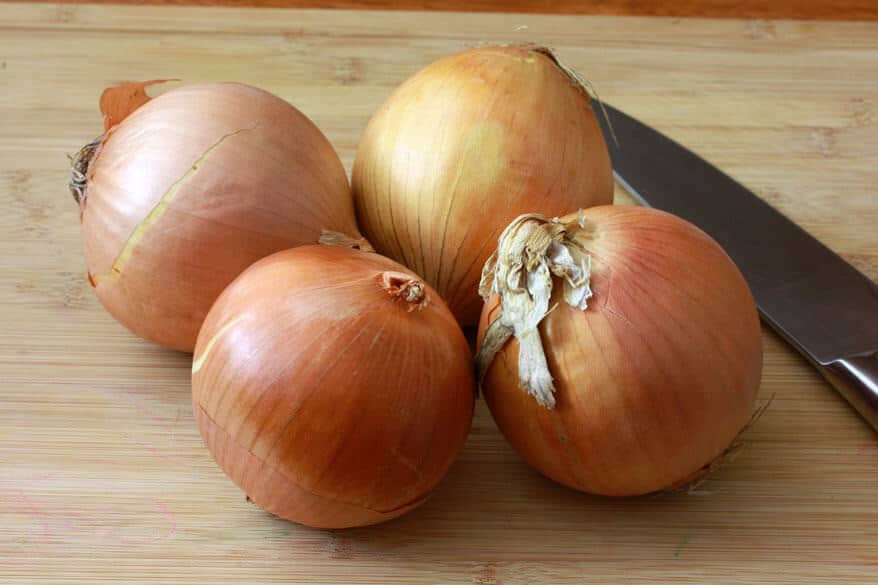 Brown the beef in a Dutch oven.  Brown the cubes on all sides.  Brown in batches so as not to overcrowd the beef – that will prevent it from browning properly.  Remove the beef and set aside, leaving the burnt bits on the bottom of the pan – those will provide a lot of flavor to the stew. 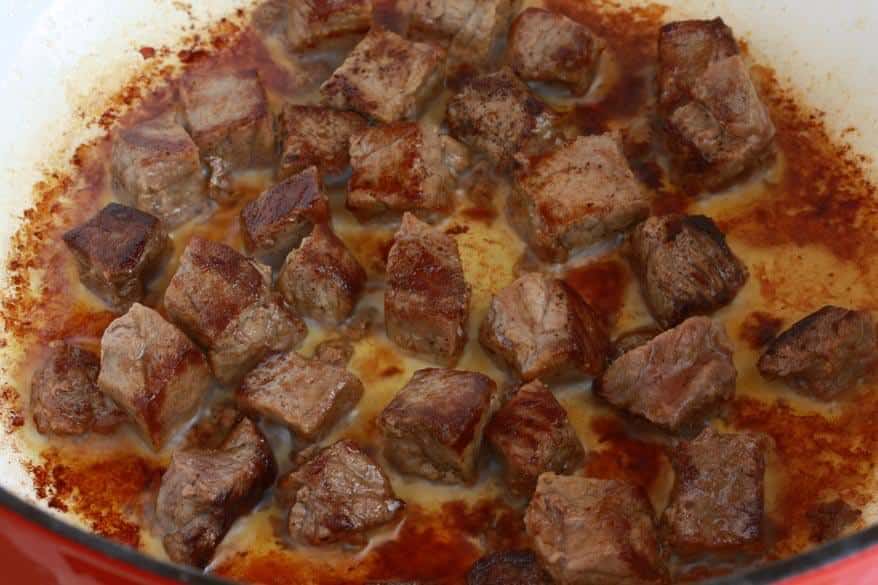 Add some more butter and caramelize the onions until golden brown.  Add the flour and stir to combine. 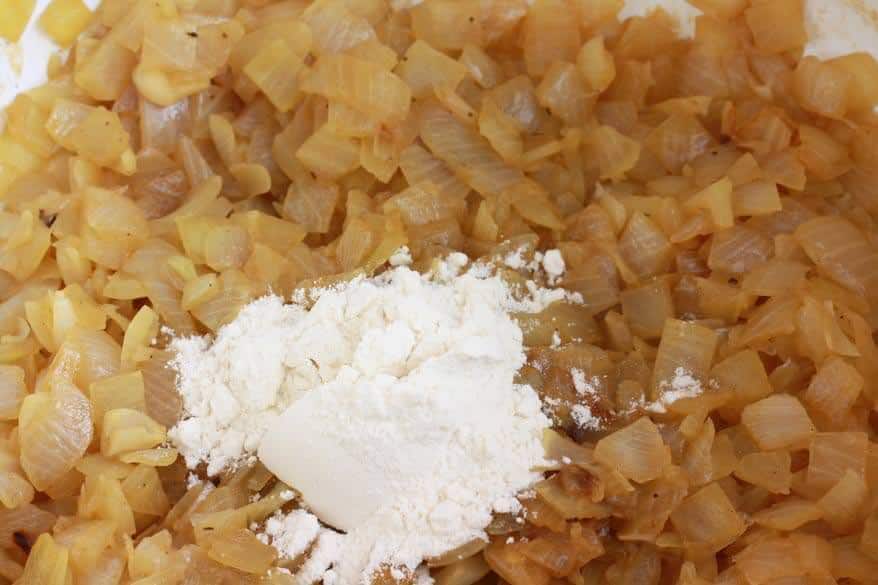 Add the beef to the onions. 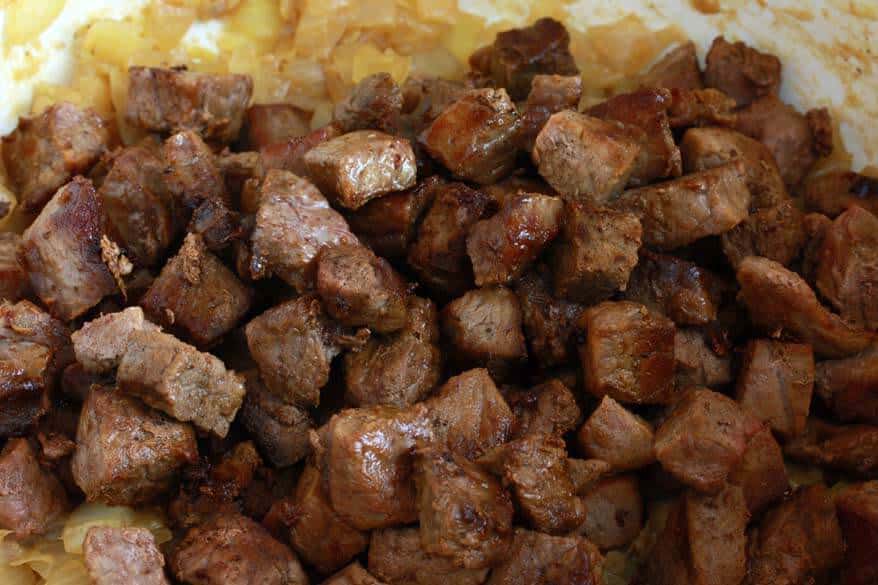 Add the beef broth and the seasonings.  Bring to a boil, reduce the heat to low, cover and simmer for 2 1/2 hours.  Uncover and simmer for another 30 minutes to help thicken the sauce.  If it needs further thickening, make a slurry with equal parts of flour and water and stir it into the stew, stirring constantly to prevent lumping.  Return to a simmer until the stew is thickened.  Add salt, pepper and more red wine vinegar to taste. 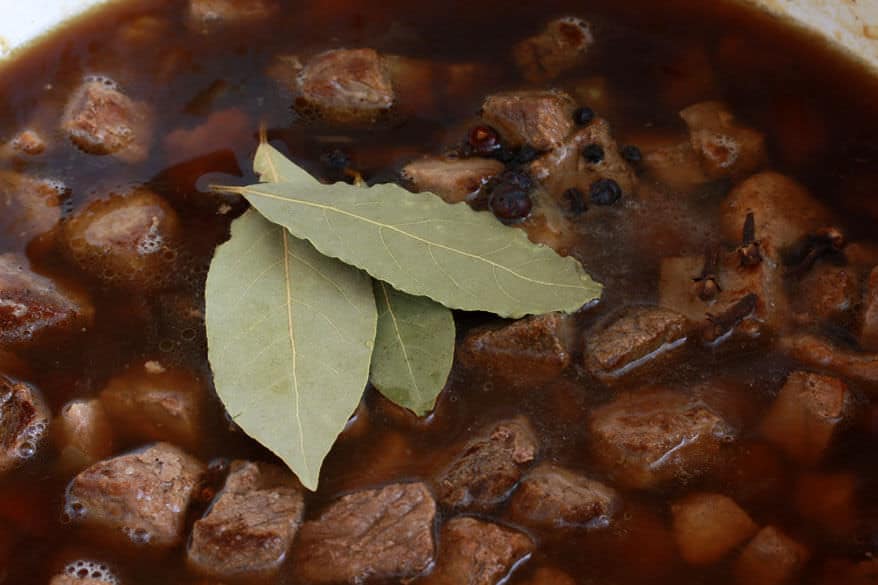 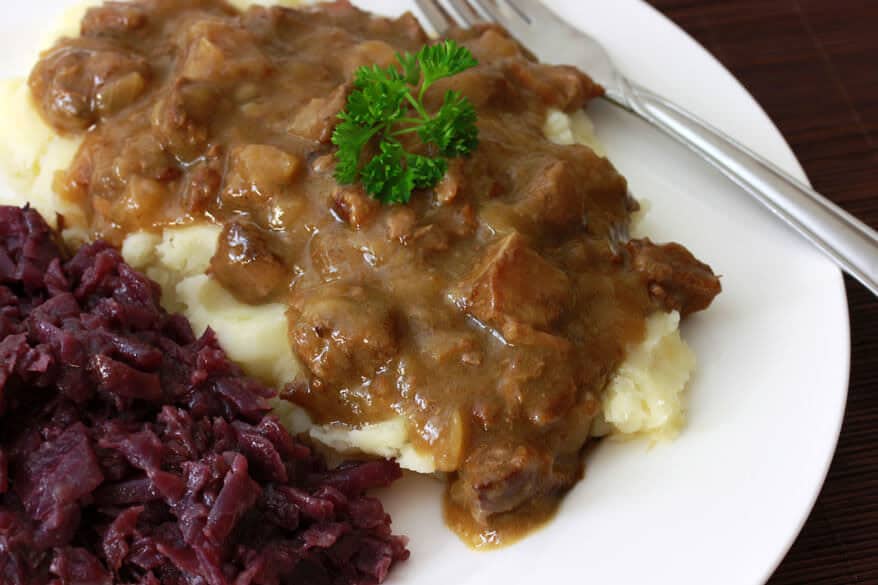 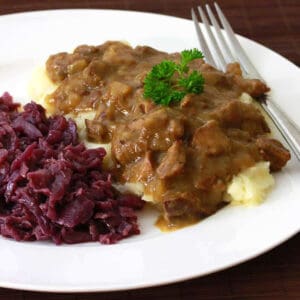