Traditional British Flapjacks the way you know and love them!  Made with oats, butter, sugar and golden syrup, these oat bars are baked until lightly browned with a deliciously deep caramelized flavor! 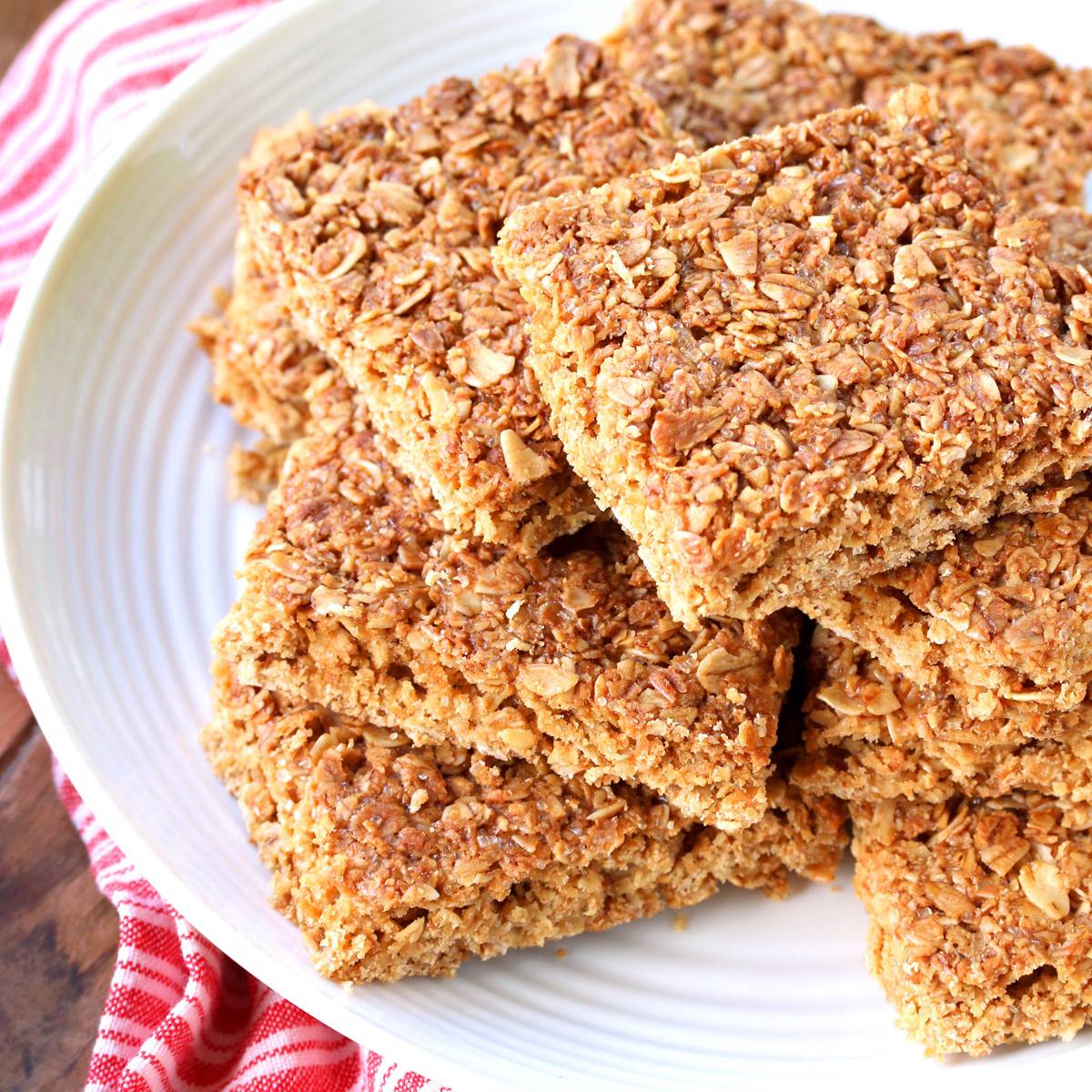 I grew up enjoying flapjacks in England and have sampled many a flapjack from many a bakery.  Whether you’ve had them many times before or are a newcomer, get ready to fall in love with one of the UK’s most treasured and traditional baked treats!

While the term flapjack referred to a pancake in the United States and Canada in years gone by, it originated in the UK where it refers to a baked bar prepared from oats, butter, golden syrup and sugar that is formed into a large, flat rectangle, baked and then cut into small rectangles.

Dating back to at least the early 1600’s in England, the term “flap” refers to a flat cake while “Jack” refers to an ordinary, or common, man (like “Joe” today in the U.S.).  In other words, this centuries-old pastry was of the common folk; unadorned with simple, accessible ingredients.

One of the earliest mentions of the flapjack in print appears in Shakespeare’s “Pericles, Prince of Tyre” (1607) where the fisherman says to Pericles:

“Come, thou shalt go home, and we’ll have flesh for holidays, fish for fasting-days, and moreo’er puddings and flap-jacks, and thou shalt be welcome.”

While historically a flapjack could refer to a number of simple flat cakes, it wasn’t until the early 1900’s that it’s association as a baked oat bar became cemented.

The flapjack is the ancestor of the American granola bar and in other countries is also called a cereal bar, muesli bar or simply a “slice” (e.g. Australia).  Traditional flapjacks are very basic and are made with just a few simple ingredients without pomp and circumstance. 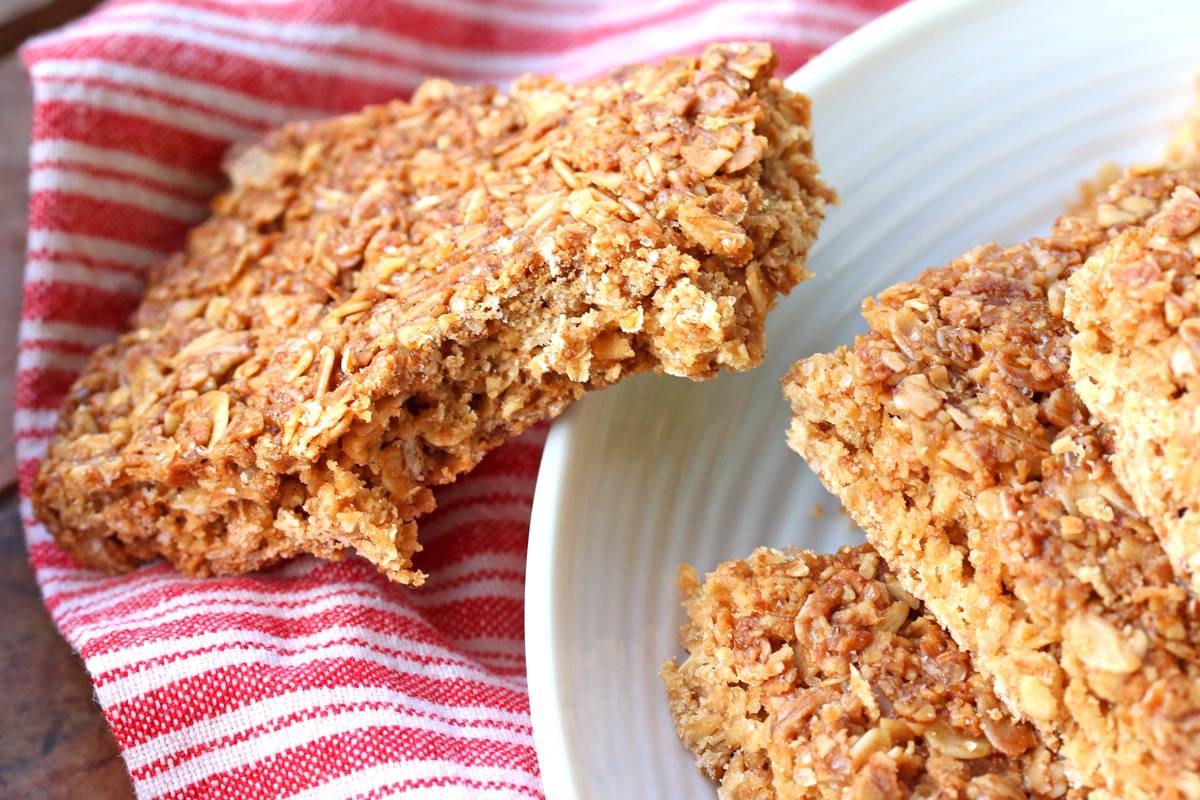 Below is a bakery we stopped at in the Lake District where the flapjacks were made after traditional fashion – simple and delicious.

Flapjacks can still be found in bakeries all around the England. 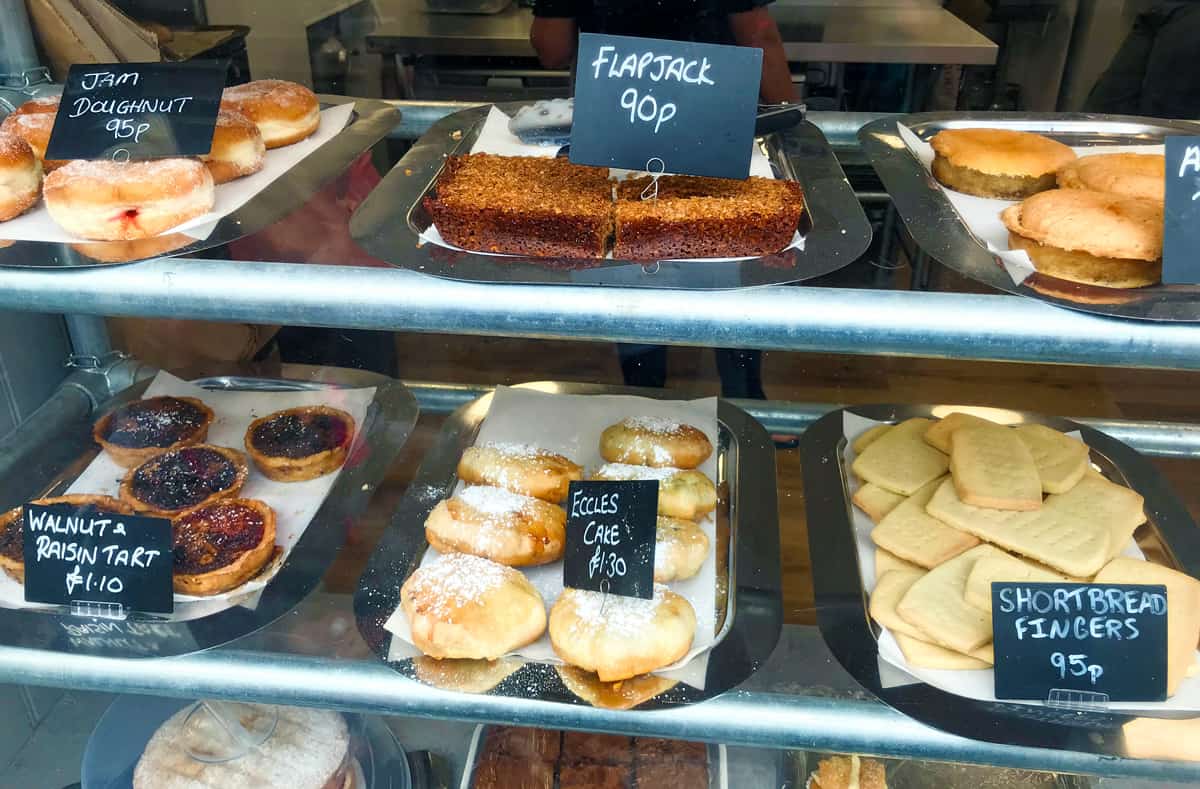 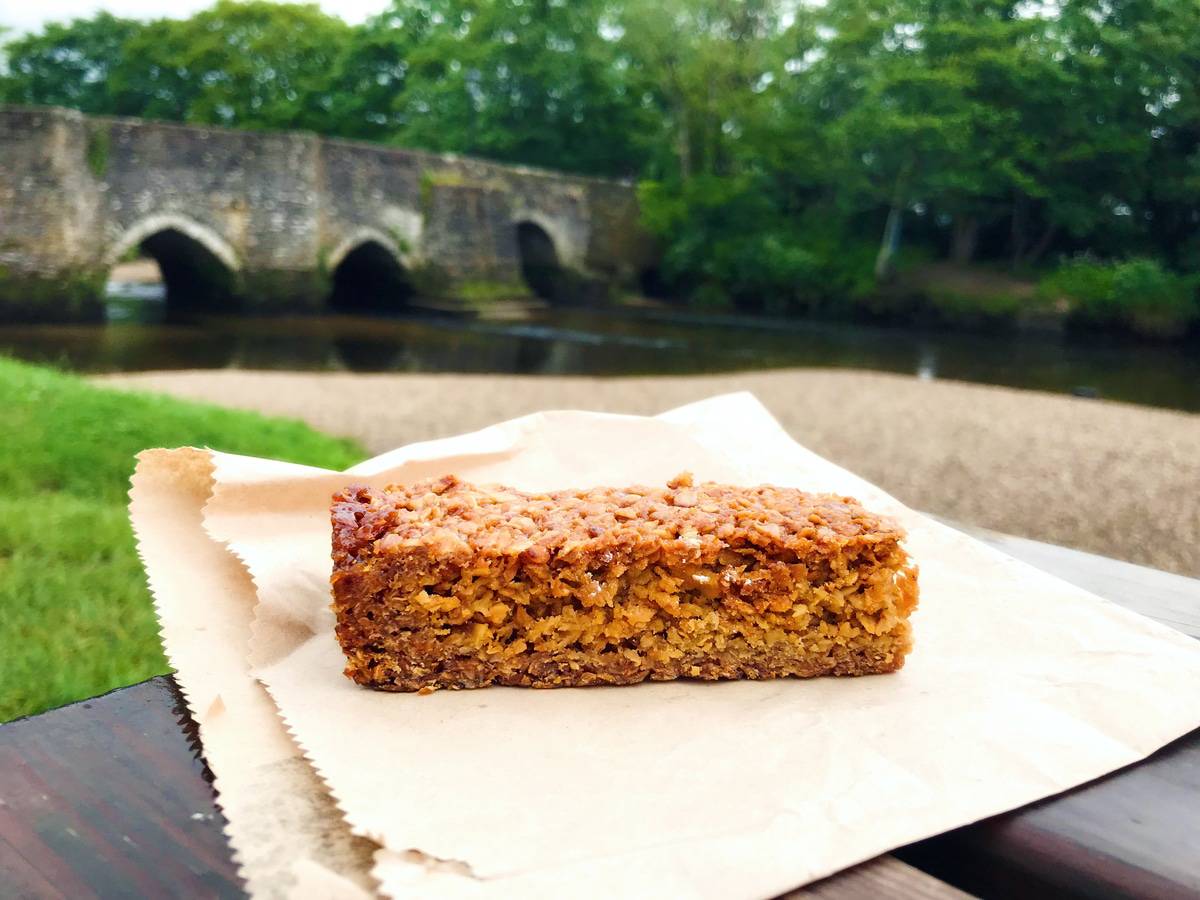 Alternatively, flapjacks can be made with any flavor combination your heart desires, including dried fruits, nuts, toffee pieces, and even spread with jam in the center or topped with icing or chocolate ganache.  You can find bakeries throughout the UK that offer these variations.

One of the best selections I’ve seen was last year at the Royal Cornwall Show where the Devon-made Flapjackery display made my mouth water.  Of course we couldn’t resist buying several varieties to enjoy while watching the air show, the parachutists, the “massed parade of hounds” (so fun!) and other demonstrations, and while admiring the finest farm animals in the south of England. 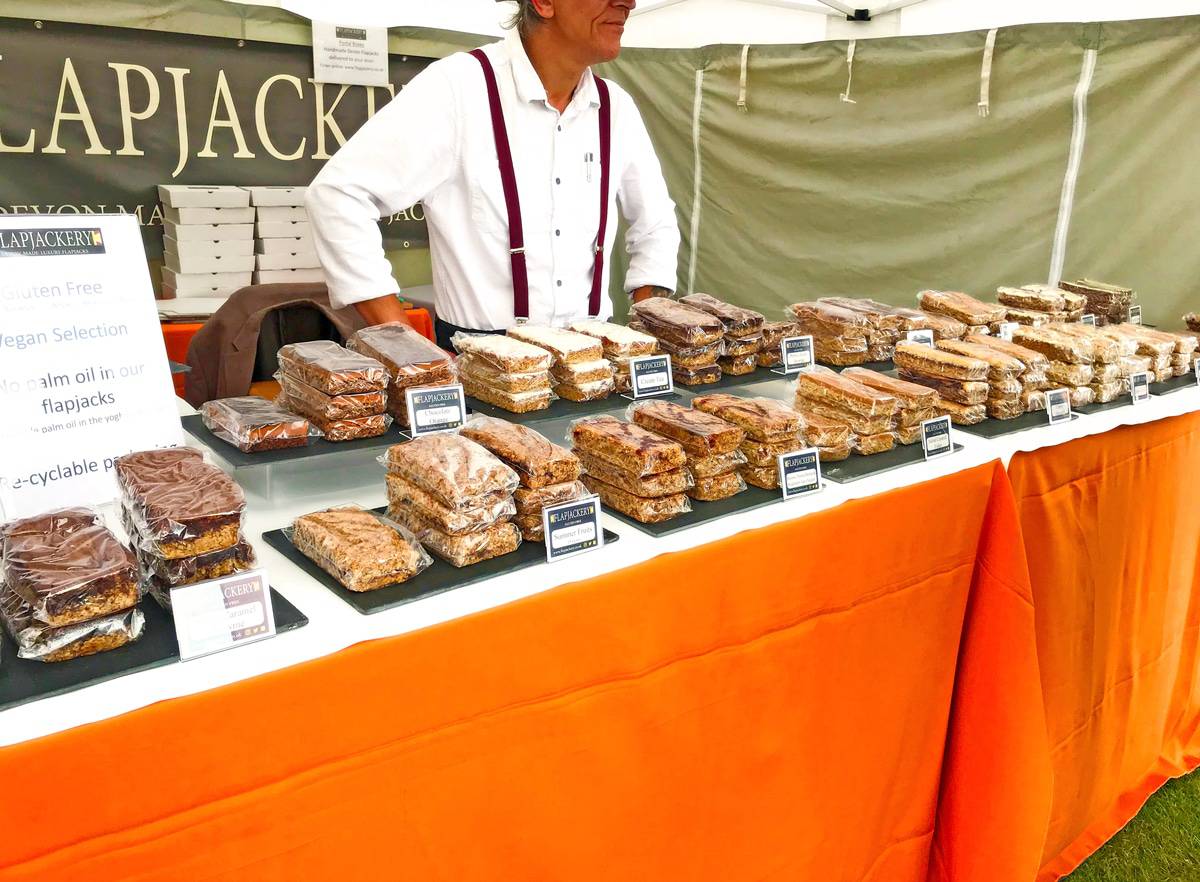 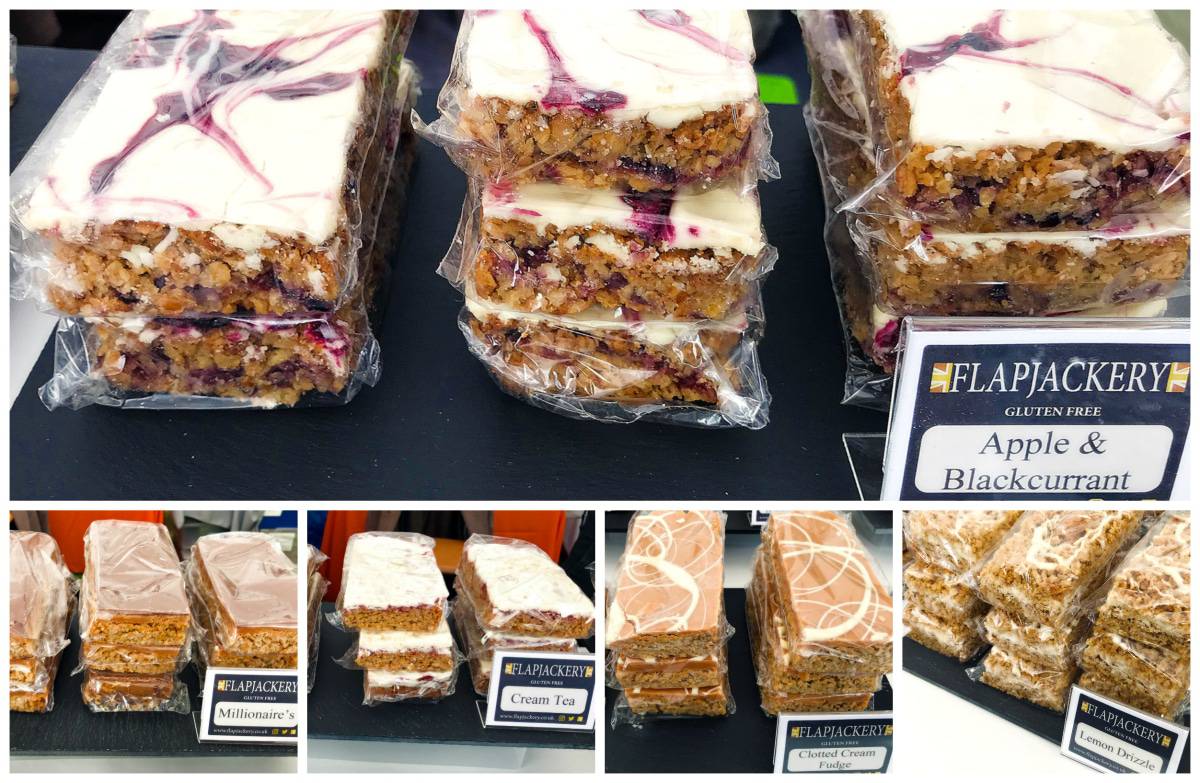 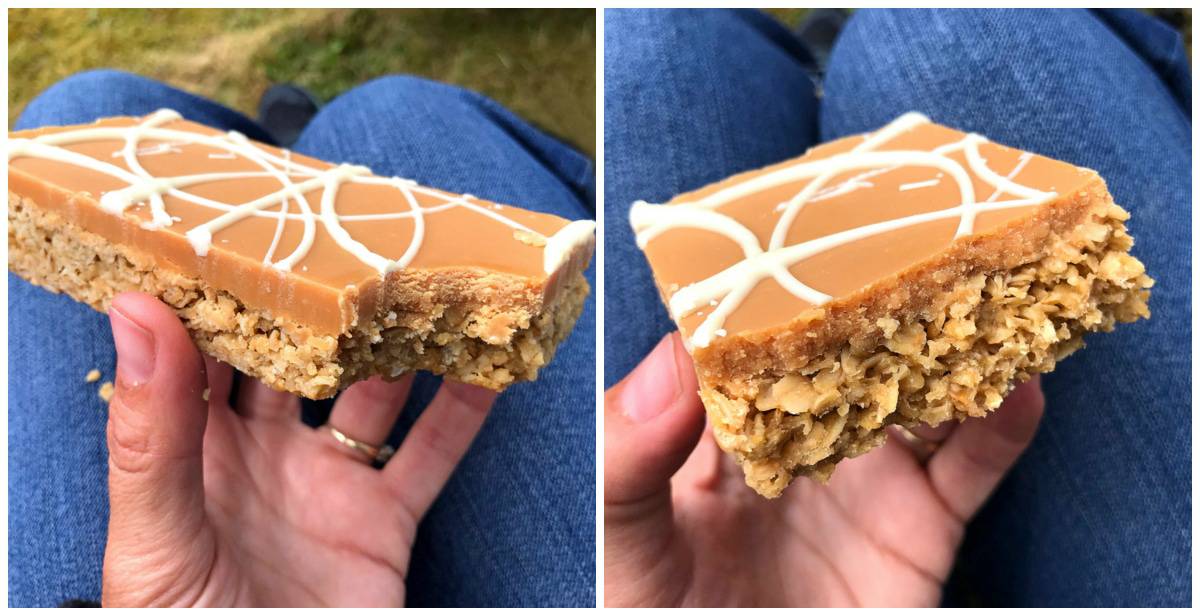 Are Flapjacks Chewy or Crunchy?

What Kind of Oats Do I Need? 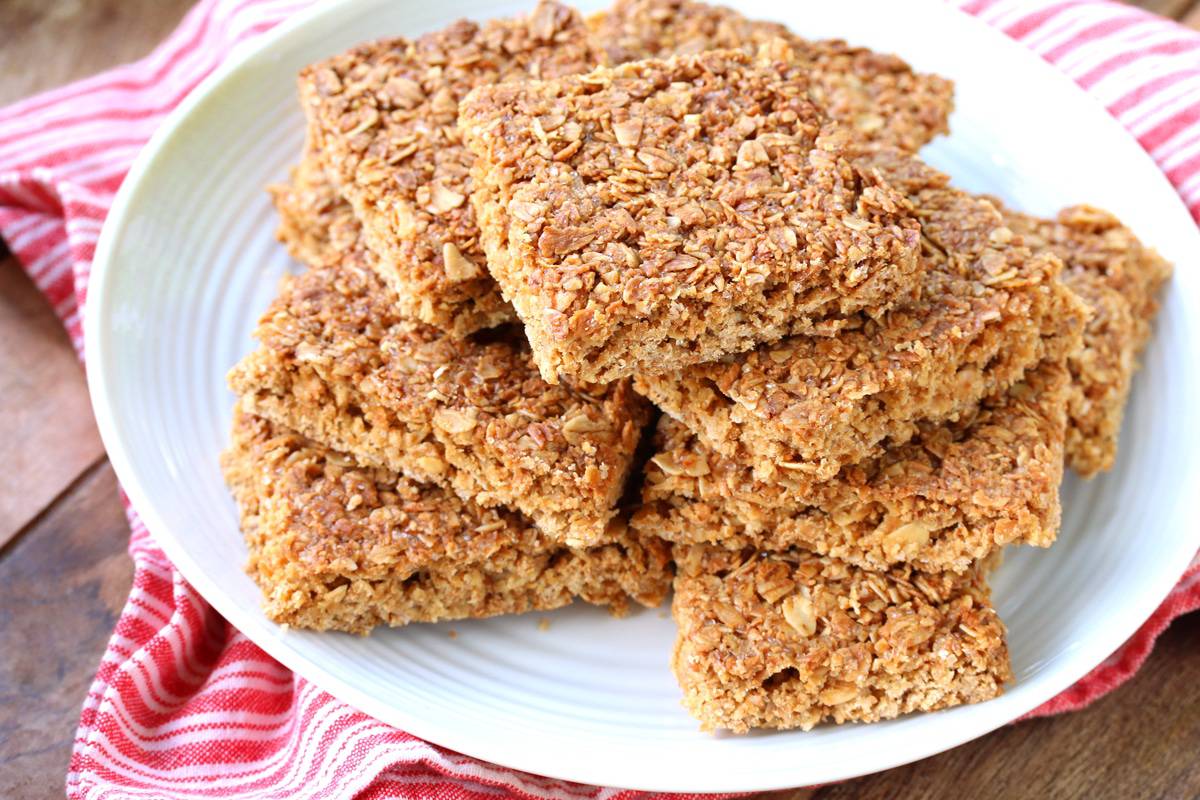 What is Demerara Sugar?

Demerara sugar is a raw cane sugar with large, sparkling crystals and a golden brown color with a caramel-like flavor.  Demerara is the traditional sugar of choice for making flapjacks both because of its flavor and because it retains some of its crunch even after it’s baked.

Is There a Substitute for Demerara Sugar?

If you can’t find demerara sugar you can substitute turbinado sugar as it also has a coarse texture and subtle caramel flavor.

A kitchen staple in Great Britain for over a century, Golden Syrup (also known as light treacle) is a thick amber-colored inverted sugar syrup known for its deep caramelized, buttery flavor.  Outside the UK you can find it in some well-stocked grocery stores but in many areas can only be accessed online.

While you can buy it online we highly recommend making your own.  It’s vastly cheaper and is fun and super easy to make.  So don’t substitute this vital ingredient!  Check out our recipe for Homemade Golden Syrup! 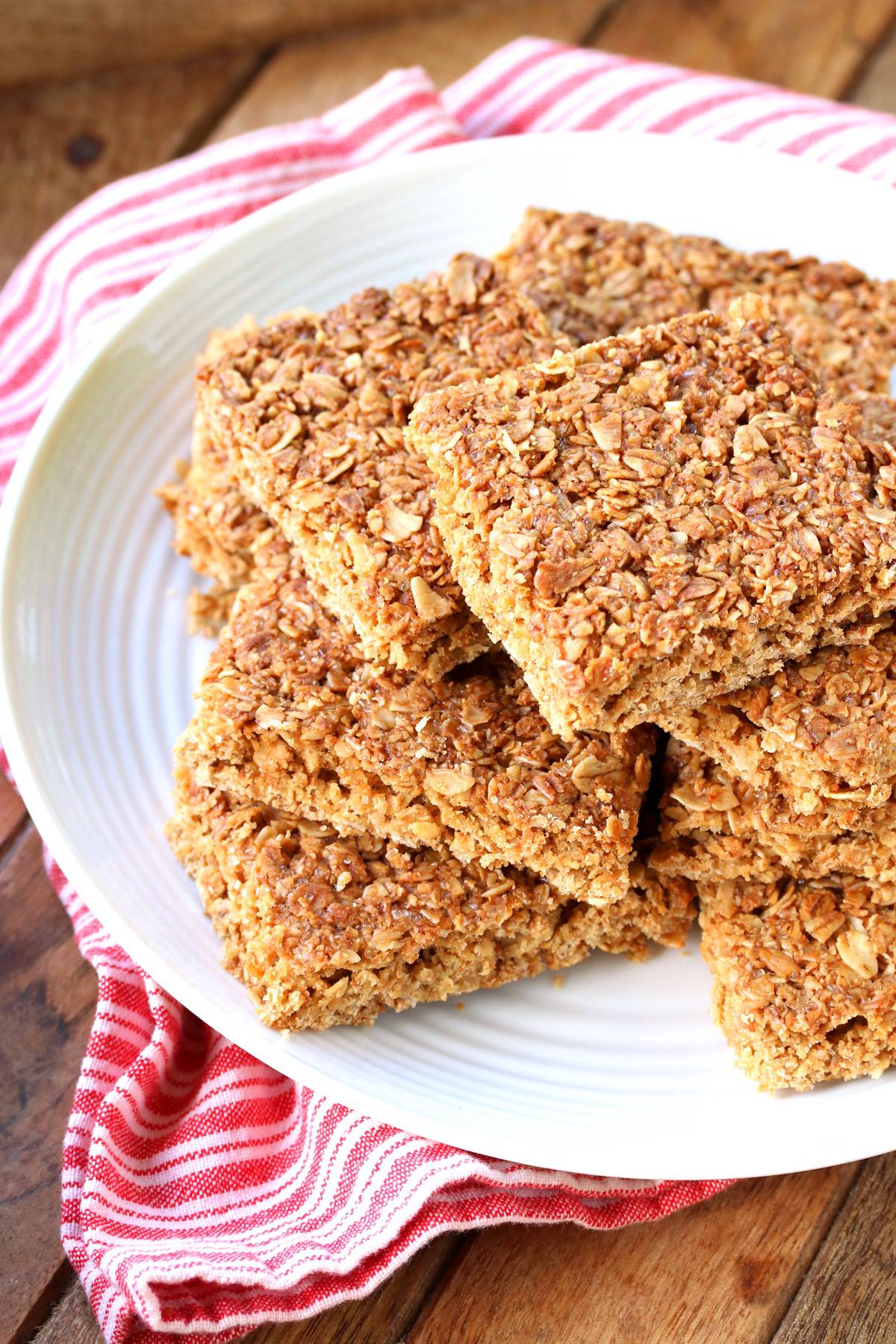 How to Make British Flapjacks

The process is super simple:

Note:  Flapjacks are naturally gluten-free, just be sure to use gluten-free oats.

Preheat the oven to 325 F.  **For best results we recommend turning the fan off if you have that option.

In a saucepan heat the butter, sugar, salt and golden syrup until the butter is melted and the sugar is mostly but not entirely dissolved. (The demerara sugar crystals add a nice crunch to the finished flapjacks.) 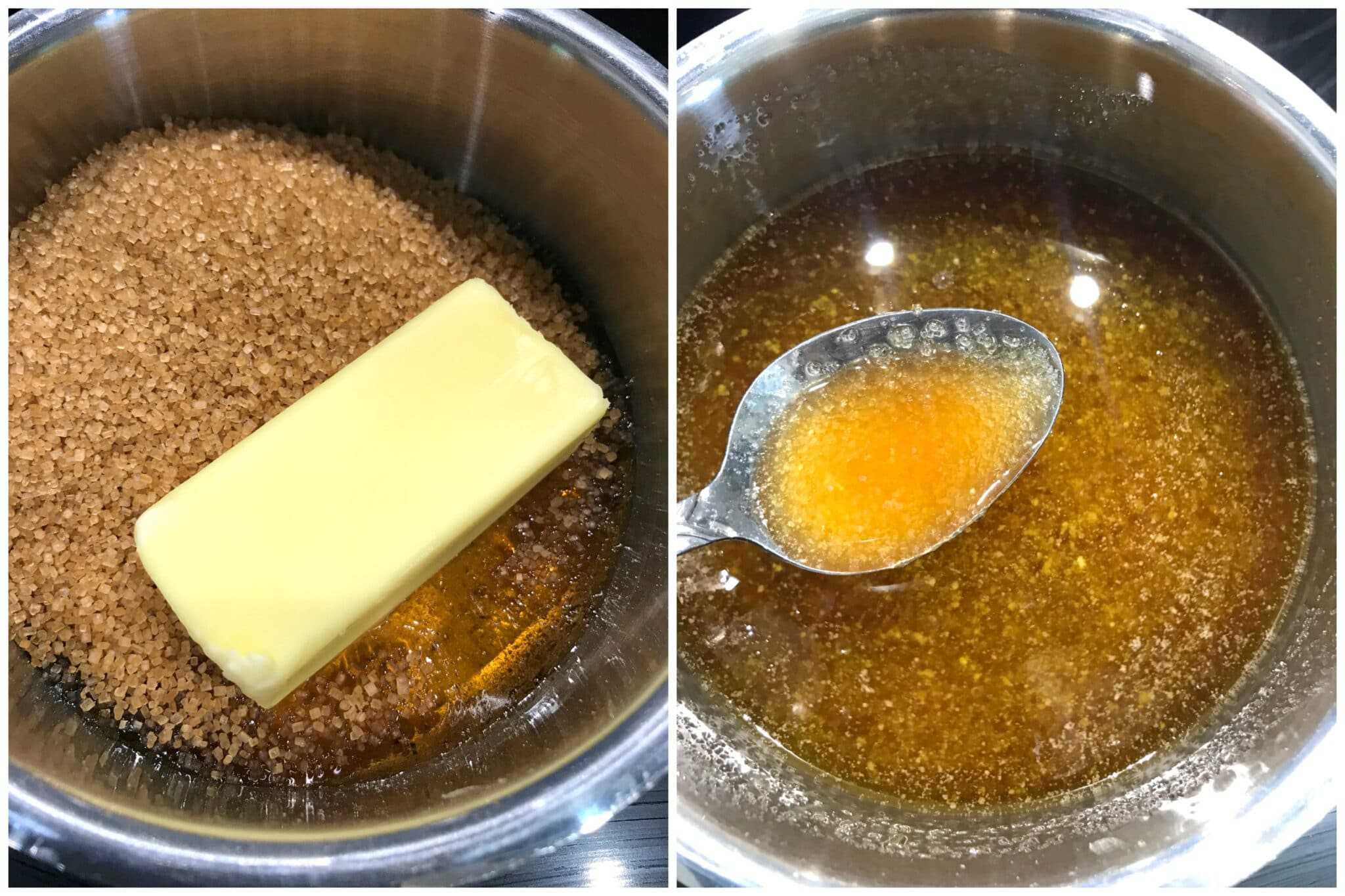 Place the oats in a large mixing bowl and pour the hot sugar mixture onto the oats. Stir to thoroughly coat the oats.

Spread the oat mixture out onto a lined baking sheet. 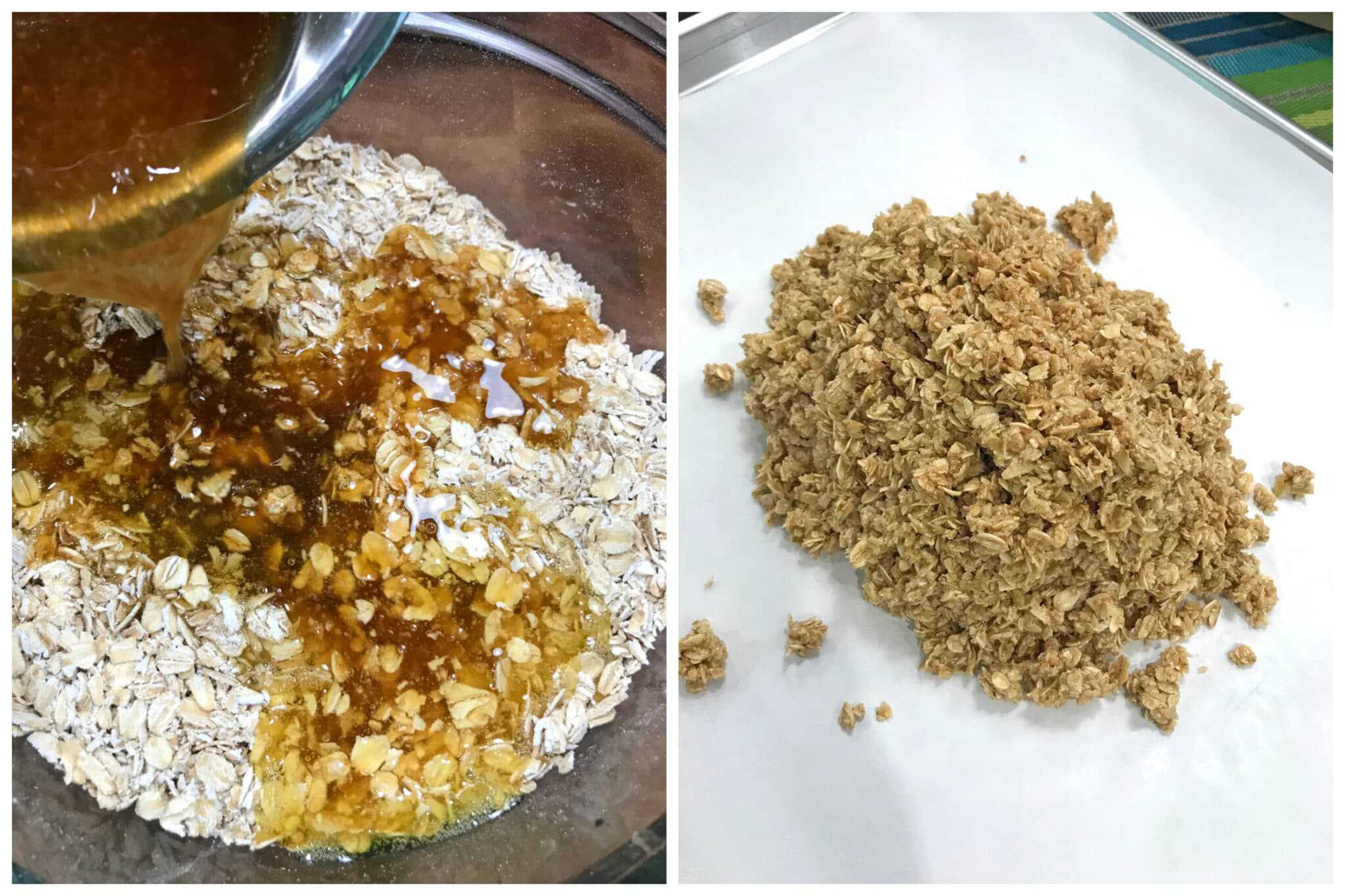 Spread the oat mixture according to desired thickness, forming it into a rectangle or square, and pat it down with a spatula or similar, forming . Bake for 30-40 minutes or until lightly browned.  The middle should be springy but not extremely soft. 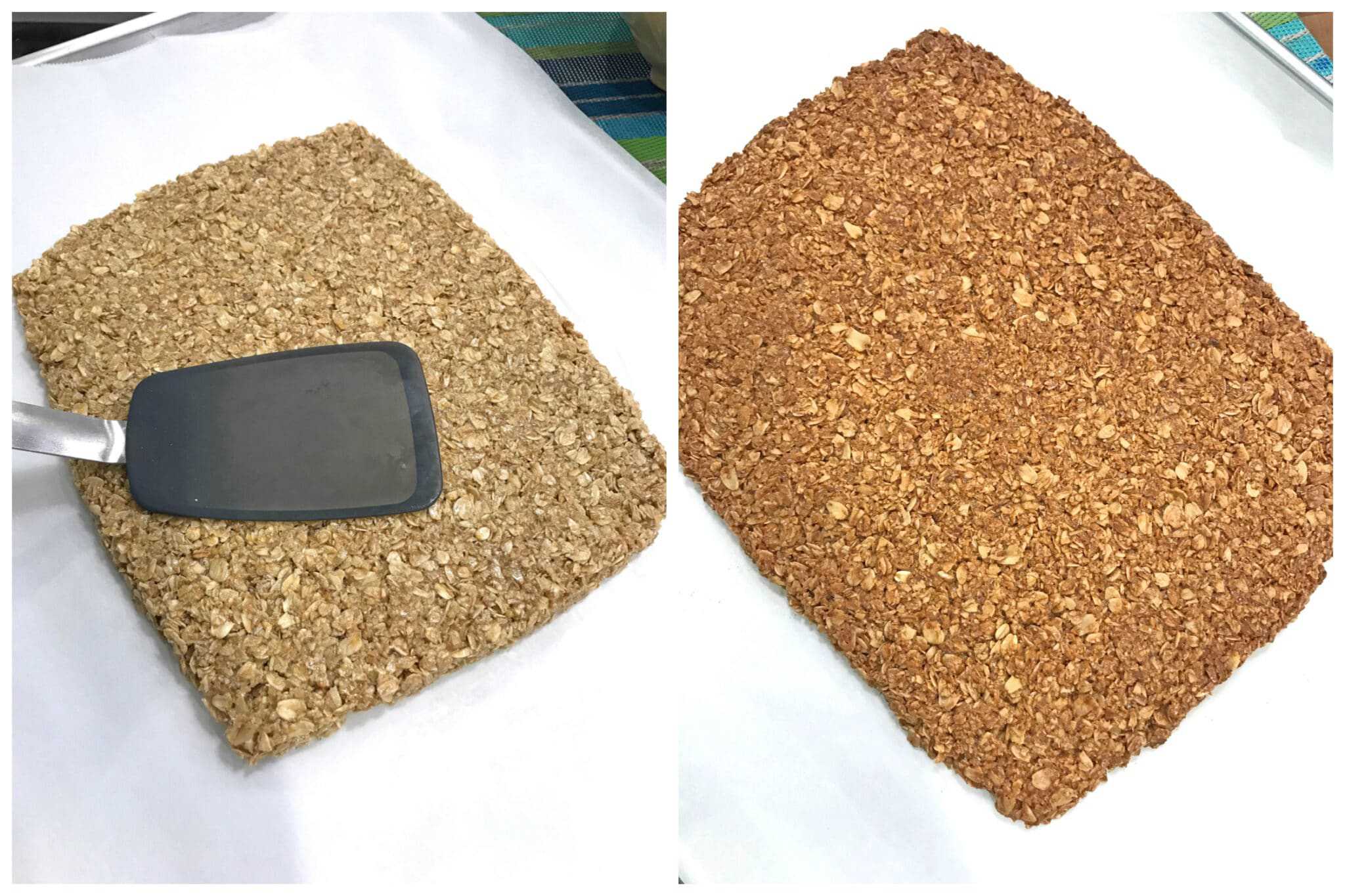 Let cool 10 minutes then cut into rectangles (or desired shape).

Transfer the flapjacks to a wire rack to cool completely before serving. 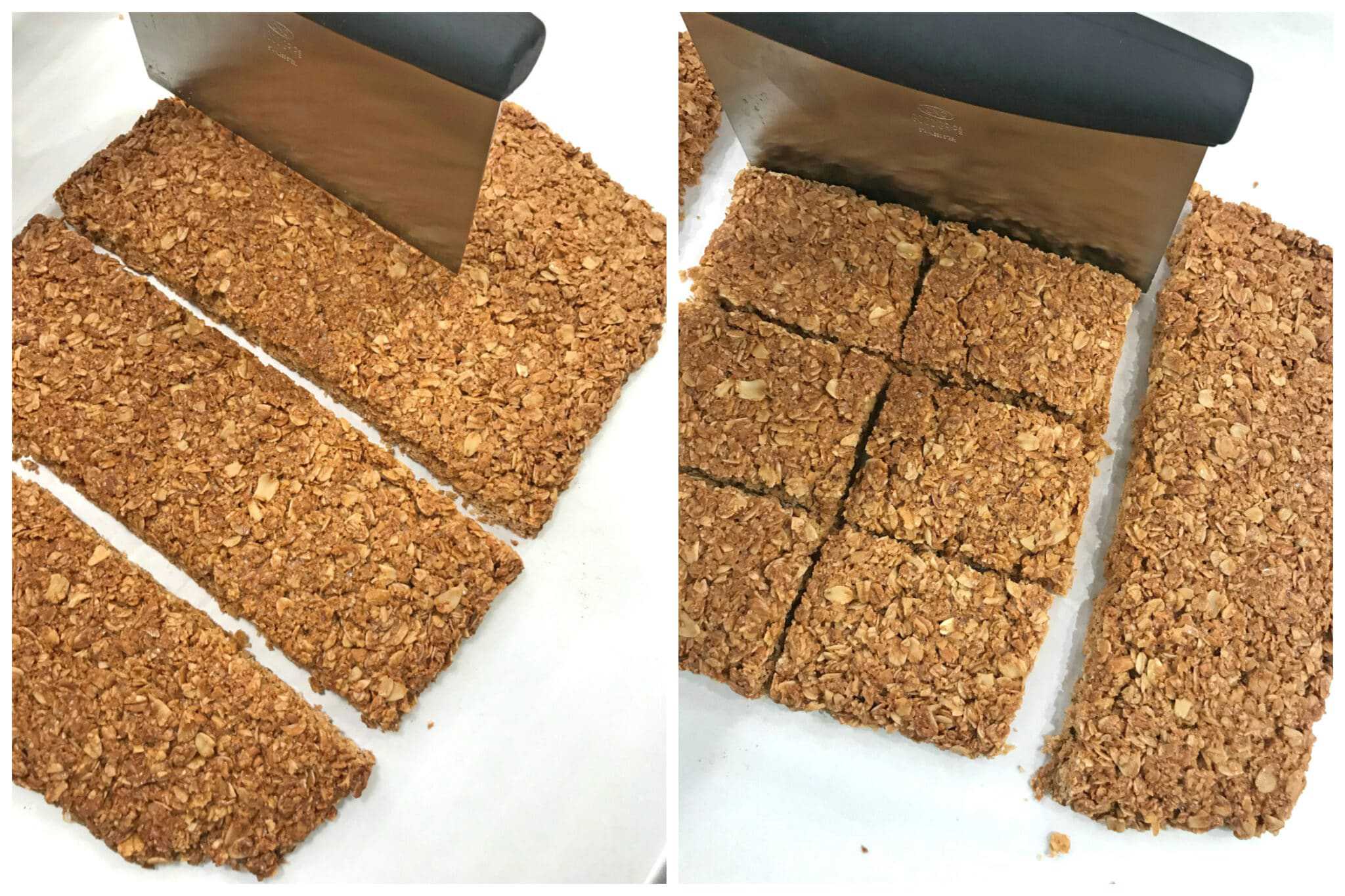 For more authentic British treats be sure to try our: 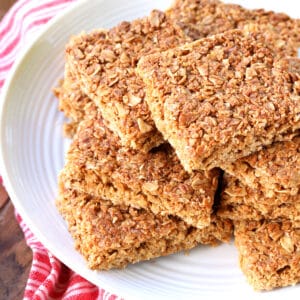