As an Amazon Associate I earn from qualifying purchases.
3277shares 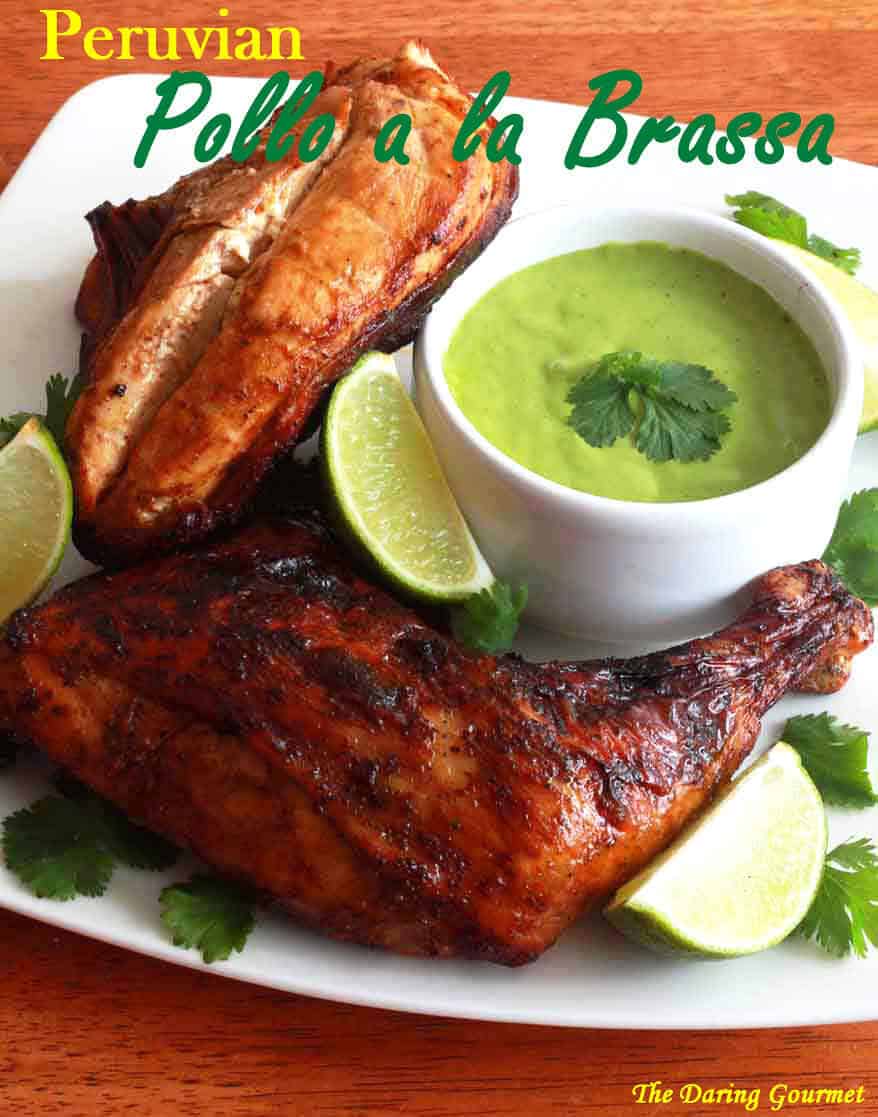 Did you know that Peruvian cuisine was listed among the top 3 of the nation’s hottest foods this year?  And did you know that Pollo a la Brasa was ranked #1 as the most popular dish in Peru?  There is even a designated national day for it in July!  Yes, Peruvians love their famous roasted chicken, and so do we!!

Now you can make it at home and it’s so simple!  Make the marinade, let the chicken marinate, roast the chicken in the oven…that’s it!  Oh, and take an extra 5 minutes to make a lovely Peruvian Aji Verde Sauce to accompany the chicken (recipe provided).  SATISFACTION GUARANTEED.

This recipe comes by way of special request from Lajoiedu (“Make a Request!“) who wanted a recipe that imitated the Pollo a la Brasa she and her husband enjoy at a local restaurant.  Her description of this dish is beautiful.

“It is the most delicious chicken I have ever eaten…The marinade is full of spices and herbs. I can tell it’s been brined/marinated. The coating/marinade also seems to stick to the skin even through the roasting process. It is fragrant, too. I would loosely describe this as herbaceous, savory, well spiced (without being overly spicy from capsicum), somewhat salty, and just as juicy as one can imagine. The skin is beautifully crisp, too.”

Who wouldn’t want to eat that?

With such detailed specifications and no aspect left out – everything from flavor to texture to aroma to appearance – I’ll admit I kind of gulped for a second at the thought of such an undertaking.  But you know how I love challenges and this one left me feeling inspired!

So with my two little ones running around me, finger-painting the kitchen window, squashing Play-Doh on the floor, and banging pots and pans, I got to work.

Now, I have no idea whether this tastes anything like Pollo a la Brasa at that particular restaurant she described.  And really, it’s not going to taste the same without the special wood-coaled rotisserie’s they use.  But is the end result authentic Peruvian in its flavor profile?  Yes.  And does it taste good?  Yes. 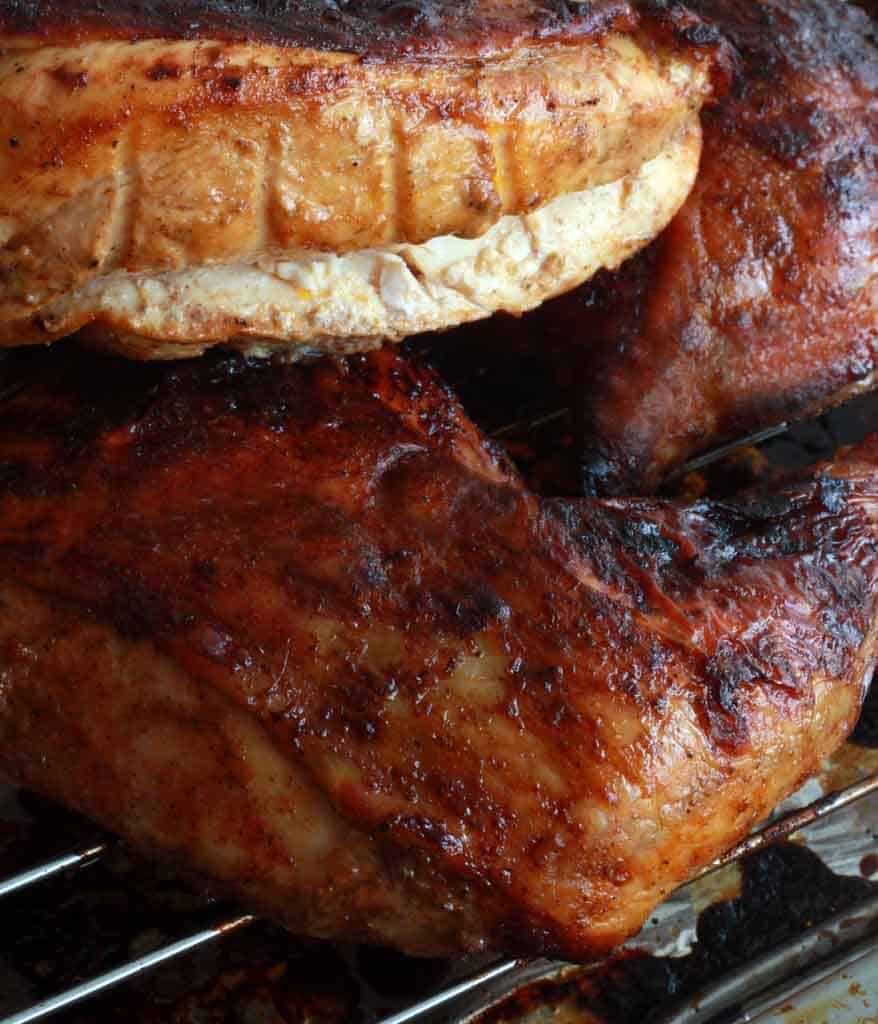 So yes, it looks like Pollo a la Brasa is going to be a regular in the Killebrew home from now on.

And once you’ve tried it, I’m confident you’ll do the same.

So let’s get down to business, shall we?

IMPORTANT NOTE:  Besides a great marinade, the key to great Pollo a la Brasa is the actual cooking method which involves a rotisserie over wood coals to give it that sublime smoky flavor.  Most of us don’t have the equipment necessary for that, so this recipe uses a conventional oven to achieve that perfectly crispy skin while leaving the meat delicately tender and juicy.  So this is the best it’s going to get without a wood-coaled rotisserie – and it’s really good!

Two quick things:  I used the convection setting on my oven.  It really made the skin crispy while leaving the meat tender and moist.  You don’t have to use a convection oven, but if you do, be sure to keep an eye on the chicken because it cooks much faster than in a conventional oven (see instructions).  The other thing:  You must use a roasting rack.  That allows the air and heat to circulate under and around the chicken to prevent the chicken from sitting in its juices and to produce the crispy skin and even cooking.

And of course, for all you BBQ’ers, barbecuing is another great alternative!

You’re going to need 3 key Peruvian ingredients (2 chili pastes and a black mint paste from an herb indigenous to Peru).  I picked these up at a local Mexican grocery store.  If you don’t have one, you can purchase them online here:  Aji Panca Paste, Aji Amarillo Paste, Huacatay Paste.  (You’ll need the Aji Amarillo paste for the Aji Verde Dipping Sauce that is traditionally served with the chicken). 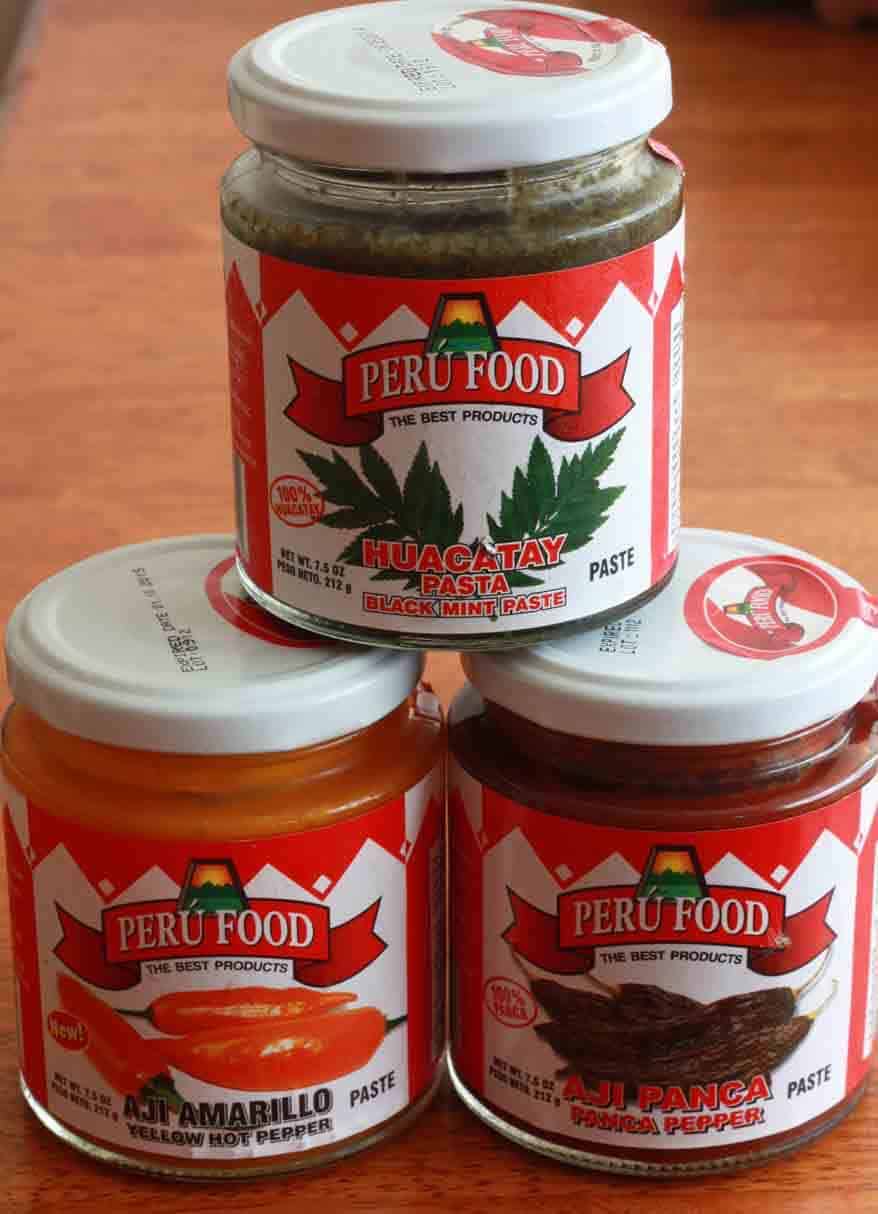 Combine all of the marinade ingredients. 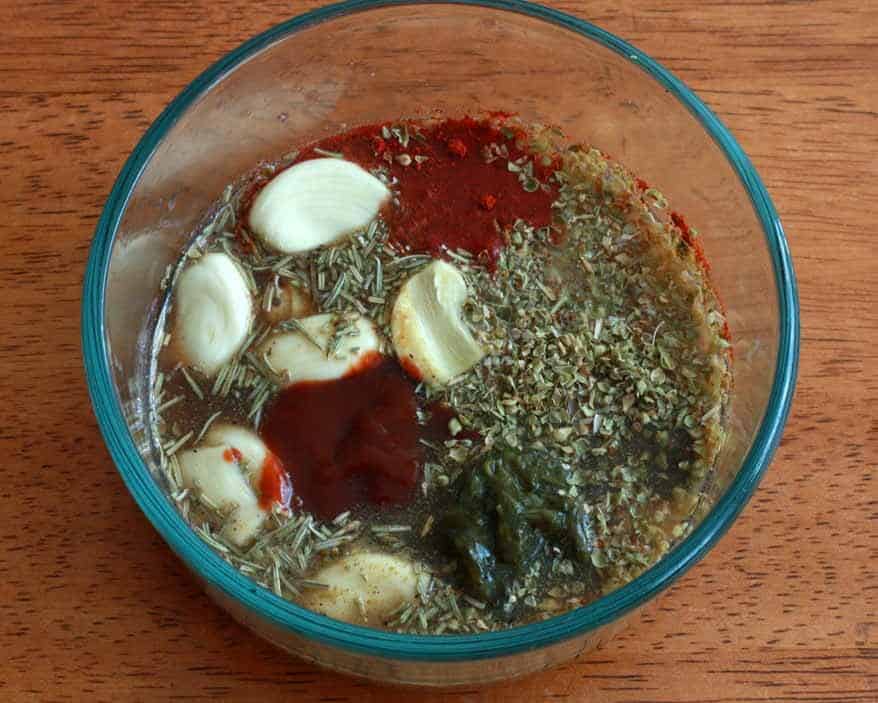 In a food processor, blend it to a smooth puree.  Yes, this is the magical concoction here. 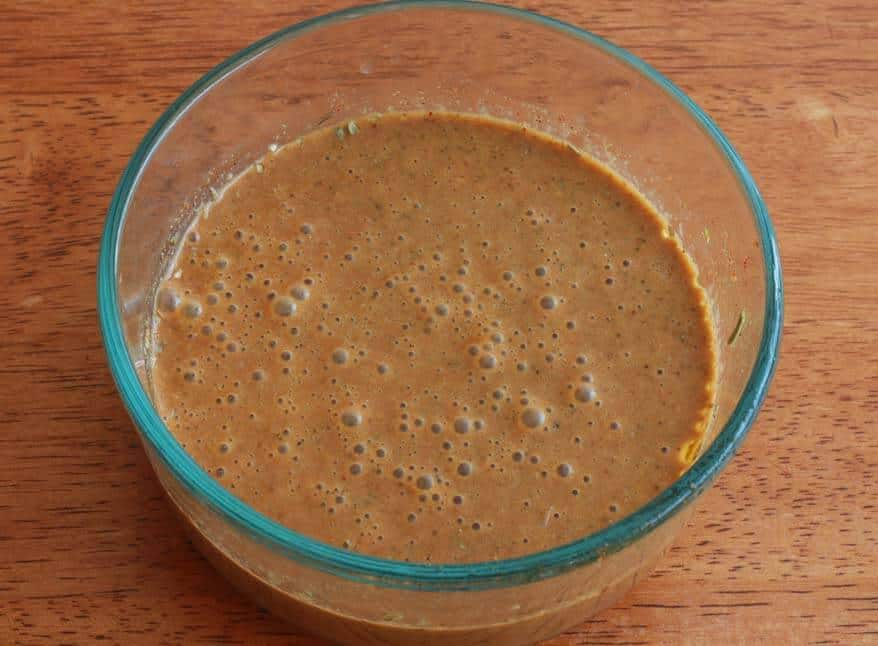 The marinade is enough for one whole chicken (you can either roast it whole or cut it in pieces).  But you can use whatever bone-in/skin-on chicken pieces you want.  This time I just used two leg quarters and a breast. 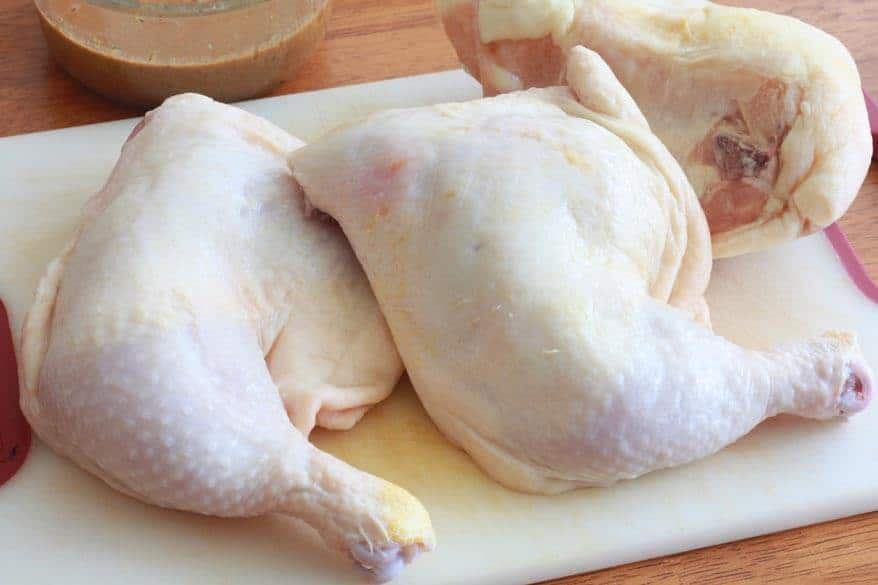 Loosen the skin and rub some of the marinade under the skin. 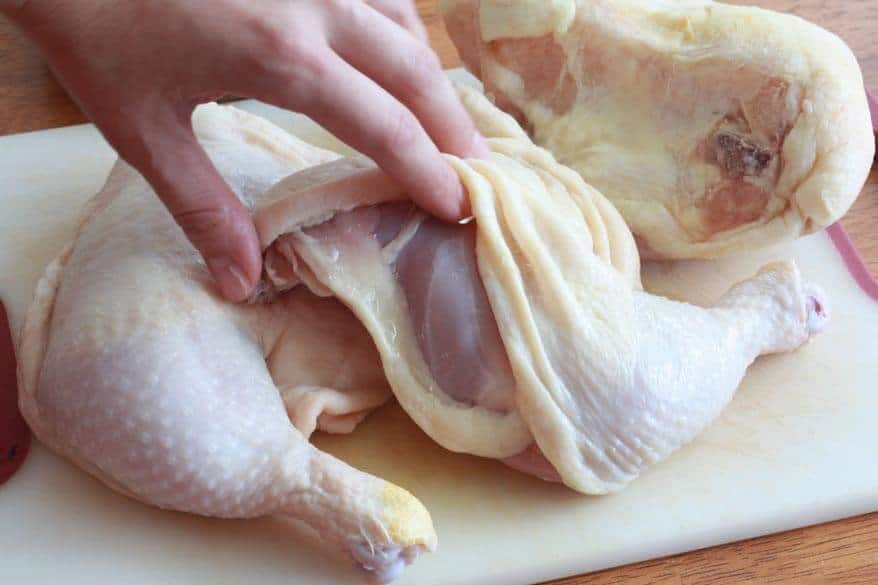 Then put the chicken pieces in a large ziplock bag (or you may need to divide it in two bags) and pour the rest of the marinade over them.  Swish around to coat.  Marinate the chicken for at least 6 hours or overnight, turning it every now and then evenly marinate the chicken. 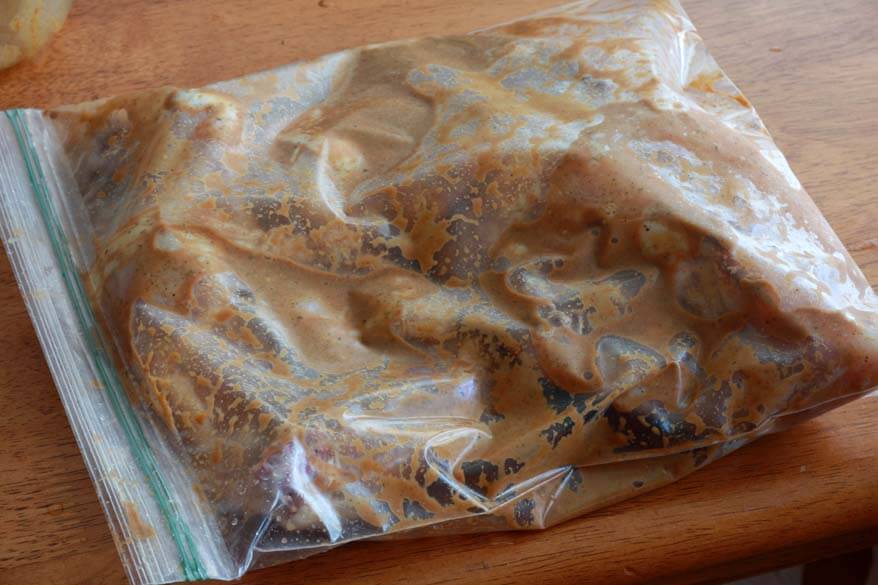 Place some foil under the rack of a roasting pan (this will make cleanup much easier!).  You can get a good, inexpensive roasting pan HERE. 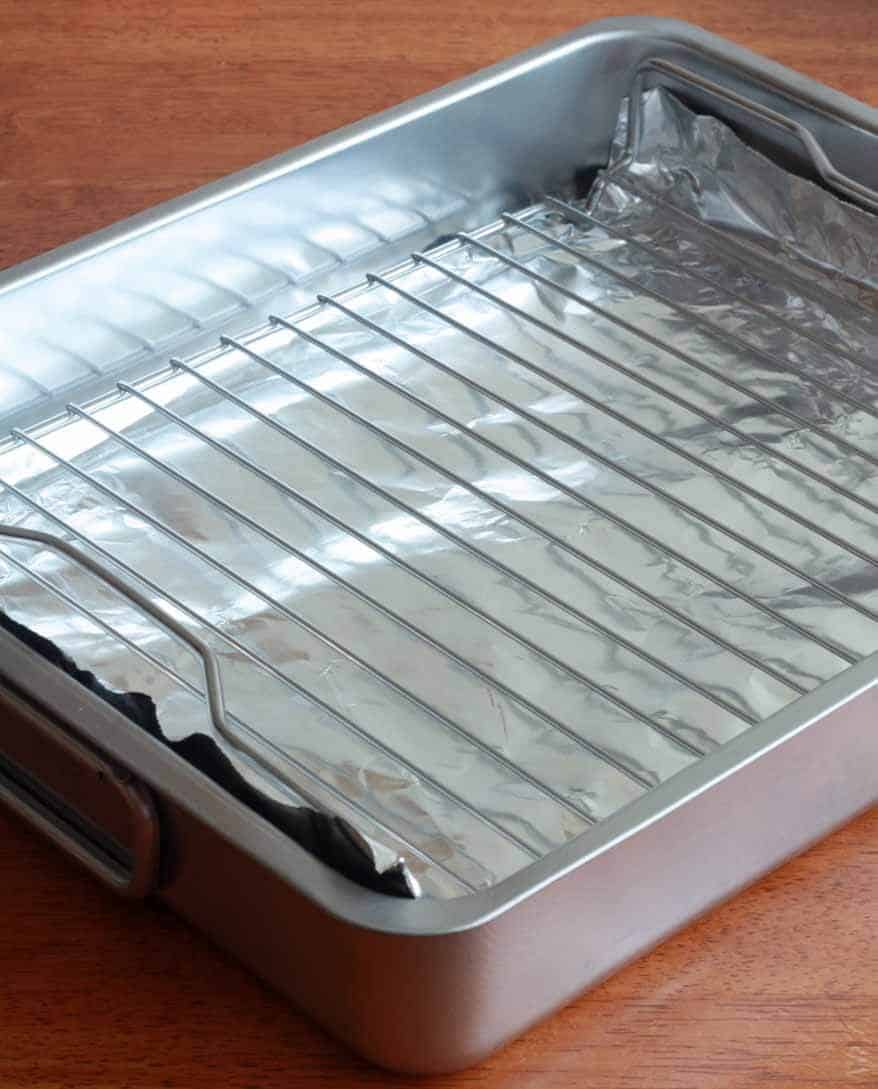 Lay the chicken pieces on it.  Spoon some extra marinade over each piece.

Preheat the oven to 425 degrees F (if using a convection oven, adjust the temperature and cooking time accordingly) and roast the chicken on the middle rack of the oven until the internal temperature of the chicken reads 165 degrees F on a meat thermometer, about an hour.  If the skin begins to brown too much too fast, move the roasting pan to the bottom rack.  You can also reduce the oven temperature.

It is recommended that you tent the chicken with foil for 10-15 minutes before serving.  It’s not necessary but it’s often recommended. 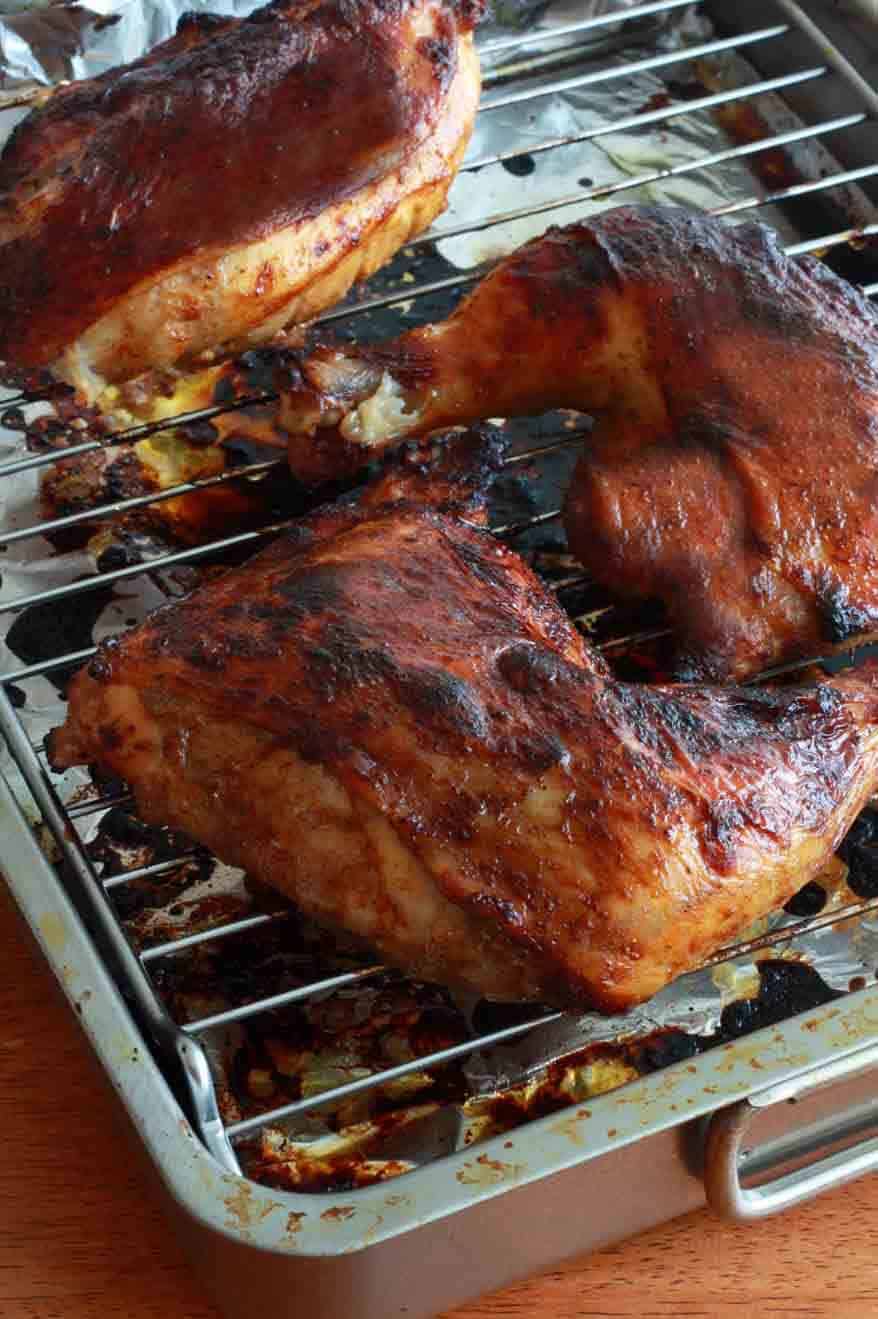 Perfect in every way! 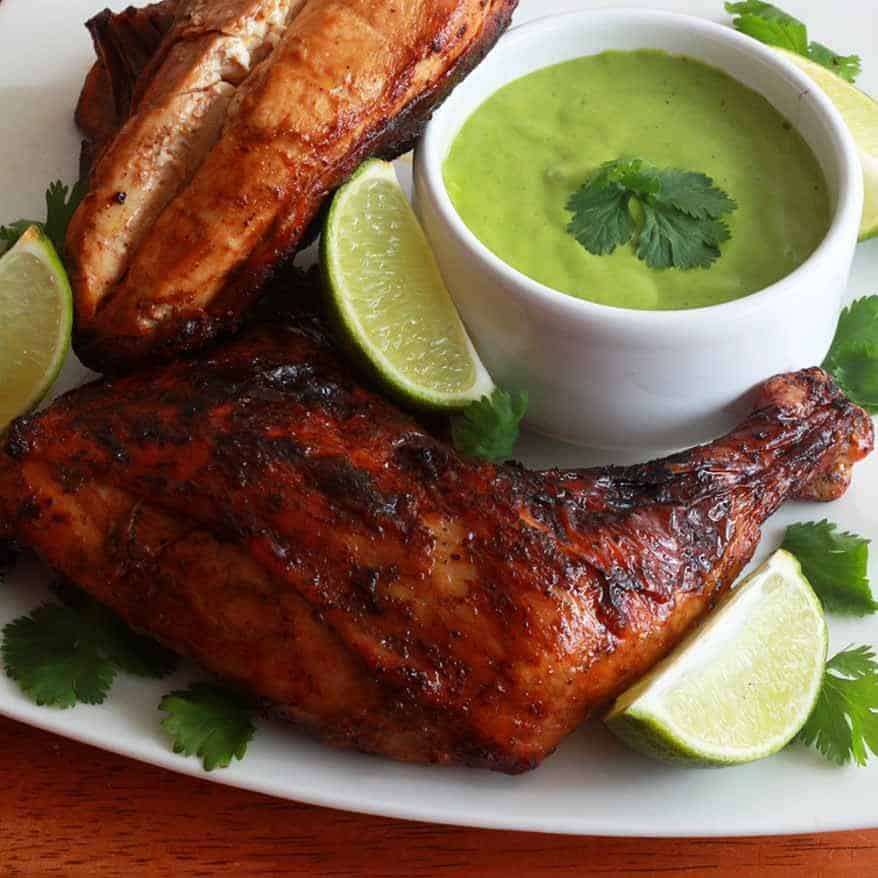 Serve with Peruvian Aji Verde Sauce (click on link for recipe).  There are often two additional sauces served with Pollo a la Brasa, but Aji Verde is the standard.  Traditional side dishes include a leafy green salad and thickly cut French fries. 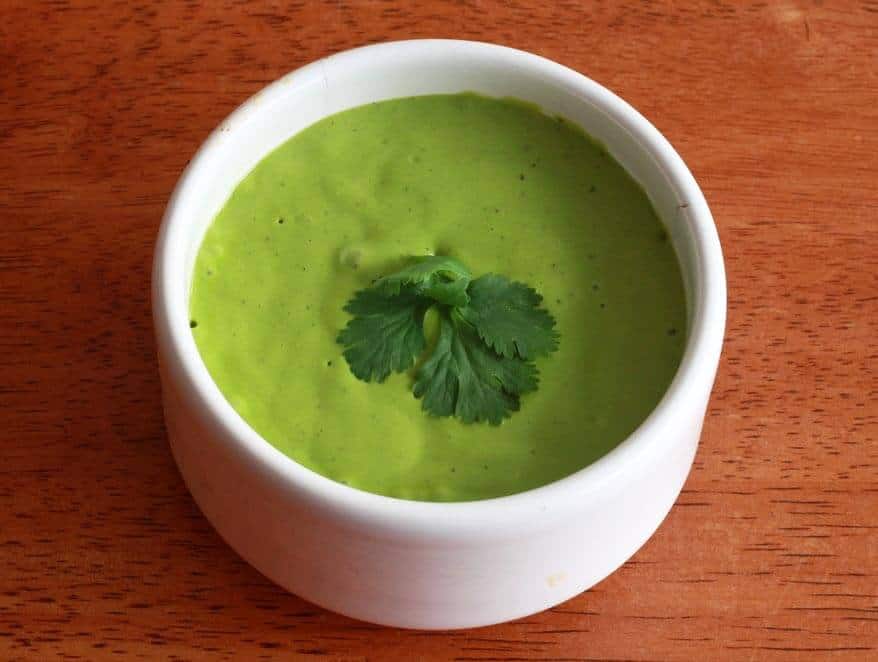 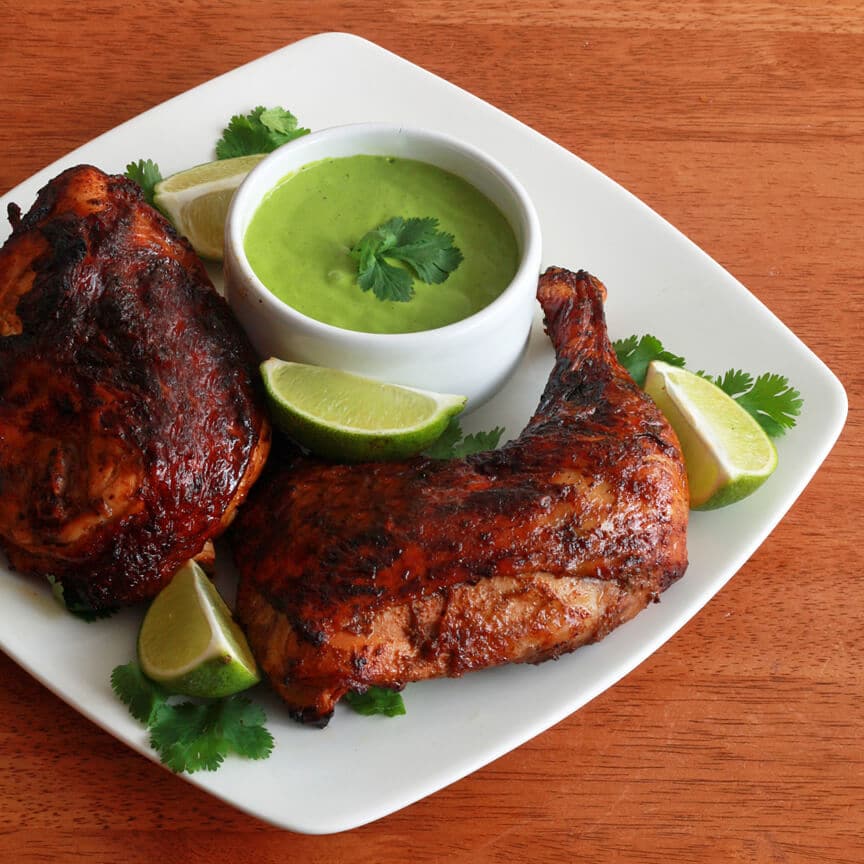