Jerk Chicken Recipe  Get ready to be transported to the Caribbean island of Jamaica as you take your first bite of this deliciously bold and dynamic, finger-licking chicken!  It’s a flavor experience your taste buds are sure to remember! 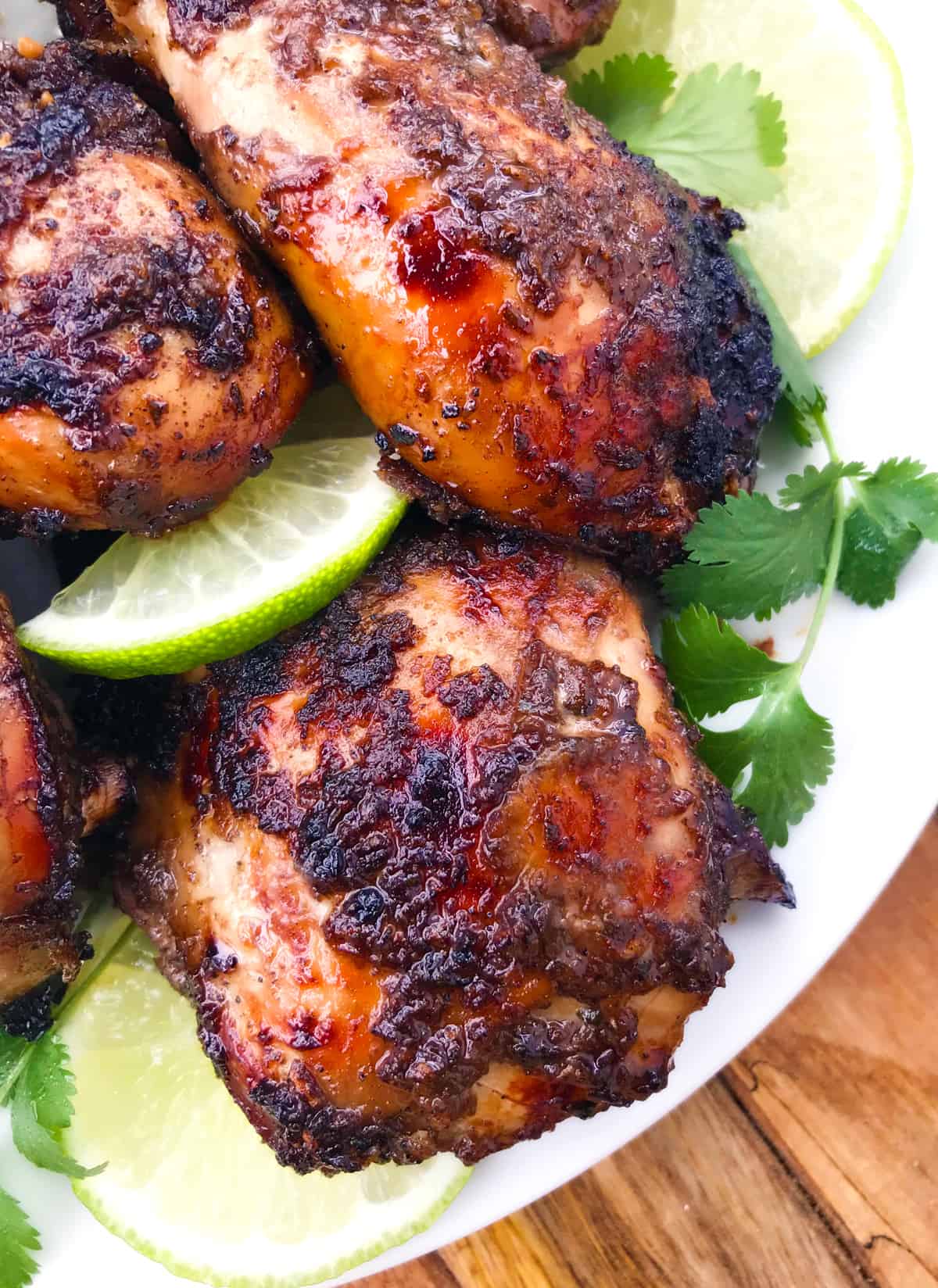 If you’ve never tried jerk chicken you’re in for a real treat.  Spicy, sweet, smoky, tangy, earthy, zesty, bright, bold…it’s a dynamic interplay of flavors that is unlike anything you’ve tasted before.  And we love it!

We could have a lot of fun with that one!  But in the cooking context it is anything but an insult – rather it’s an exquisitely delicious cooking method and ingredient pairing that originated in Jamaica.  The rich history behind this cooking method is  fascinating.  Some historians believe it began with African slaves who escaped the British capture of the island in 1655 and found refuge in the wild mountainous regions where the local Tainos lived.  They were forced to adapt to their new surroundings and made use of the natural, indigenous food sources around them, including Scotch bonnet peppers and a variety of spices.  They intermingled with the Tainos, learned their cooking methods, contributed their own, and came up with a spicy, flavorful sauce that they used to season their meats which they slow-cooked over wood fires.  This group later became known as the Jamaican Maroons and their unique spicy sauce has since become widely known and popular throughout the world.

This method of cooking became known as “jerk” which is thought to come from the Spanish term charqui, which refers to dried meat and is also where the English word for “jerky” comes from.  It also refers refers to the method of poking holes into the meat  so that the flavors can more fully be absorbed. 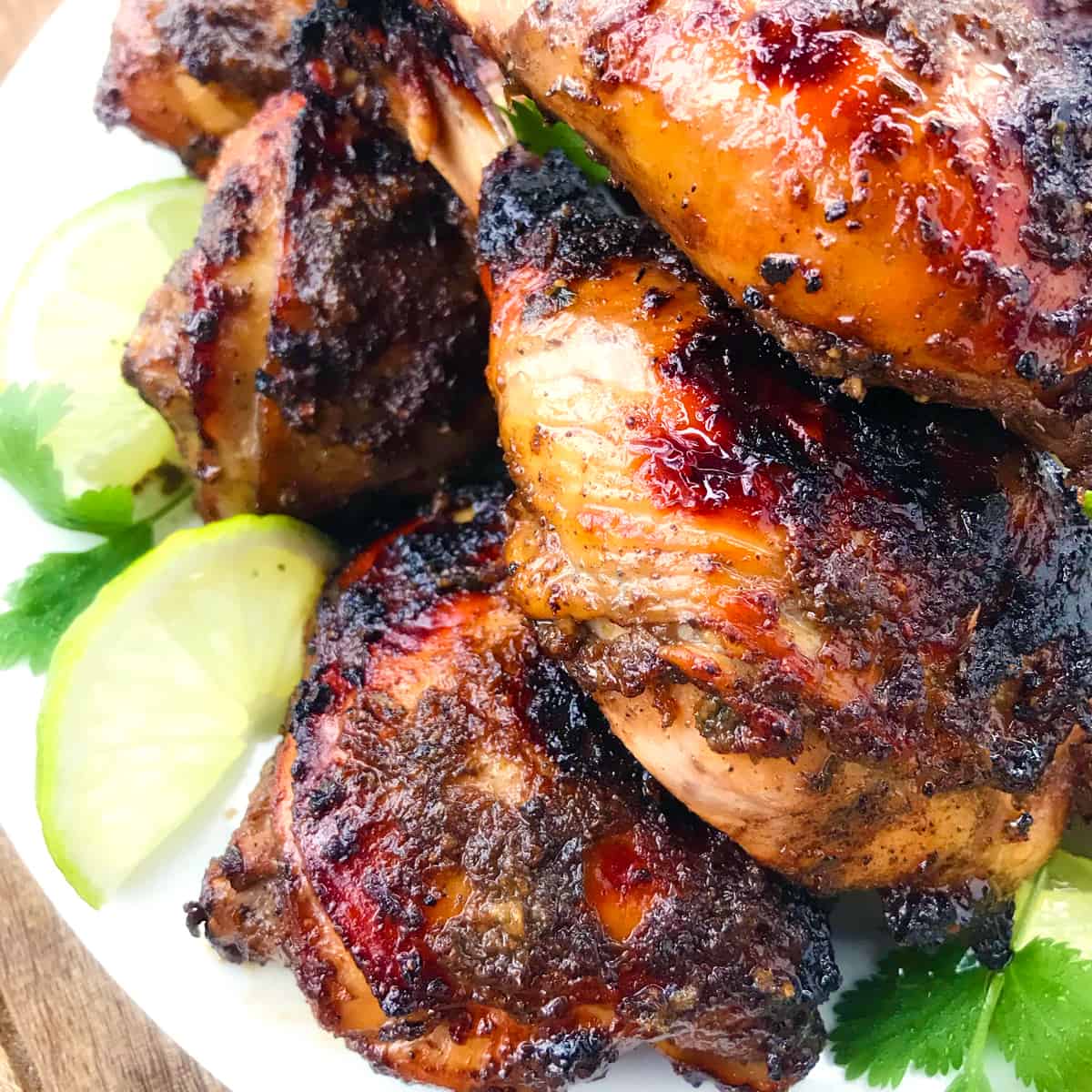 The jerk sauce that is traditionally slathered on the meats before roasting consists of allspice (the signature flavor of jerk), onions, garlic, Scotch bonnet peppers (jerk’s famous source of HEAT), soy sauce, brown sugar, ginger, cinnamon, nutmeg, cloves, and thyme.   The interplay of these bold and dynamic ingredients creates a flavor experience that your taste buds will not soon forget!

This low carb jerk chicken captures the authentic flavors of traditional Jamaican cooking and you’ll soon be licking your fingers with delight!

What to Serve with Jerk Chicken

You can serve with this with any number of vegetables, traditional BBQ sides, and more.  Here are just a few ideas: 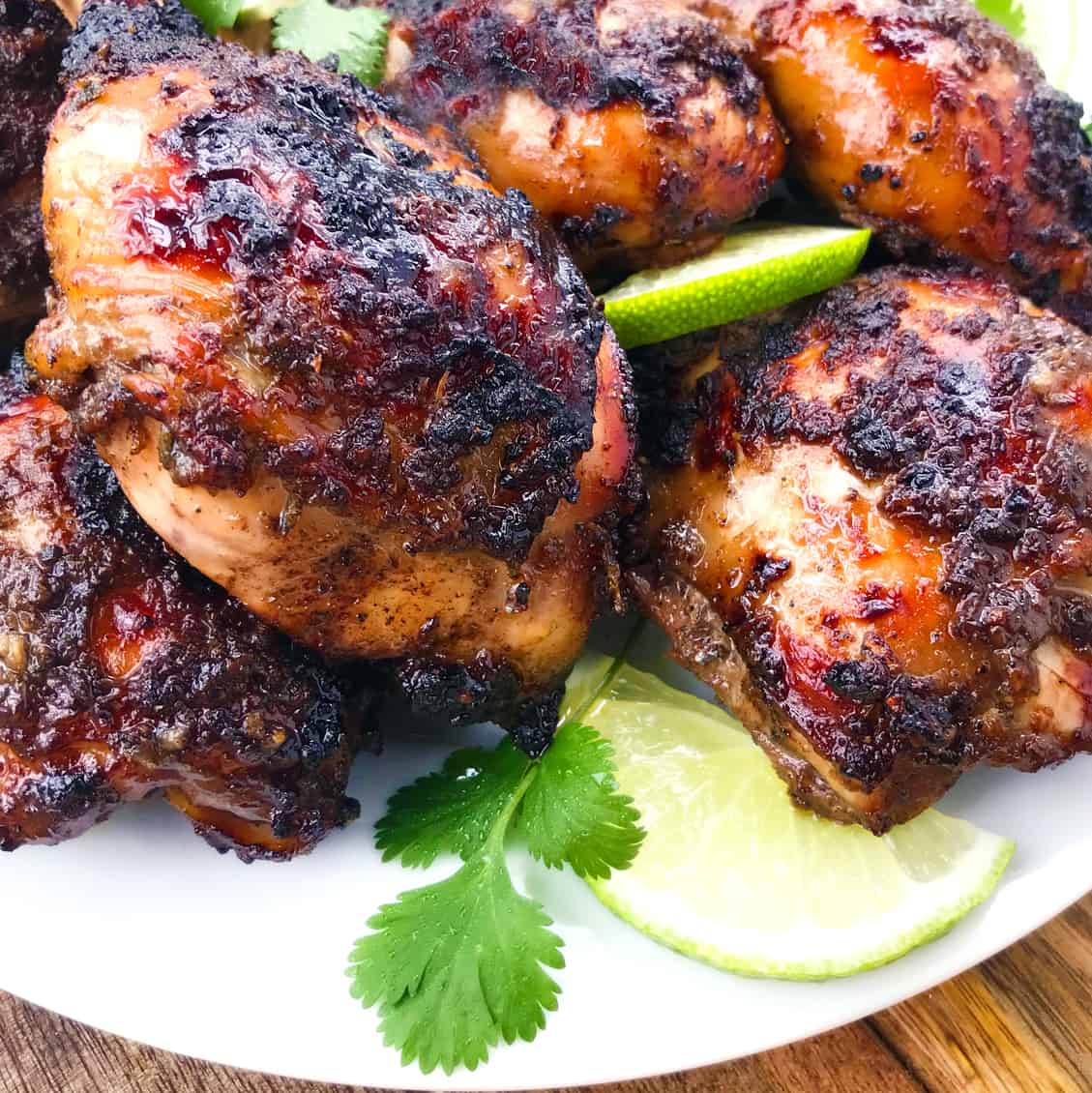 First we need to make the famous Jerk Sauce.

Absolutely nothing compares to homemade and our recipe captures the bold, fresh, and vibrant flavors of authentic Jamaican jerk sauce.  Grab our recipe for traditional Jamaican Jerk Sauce. 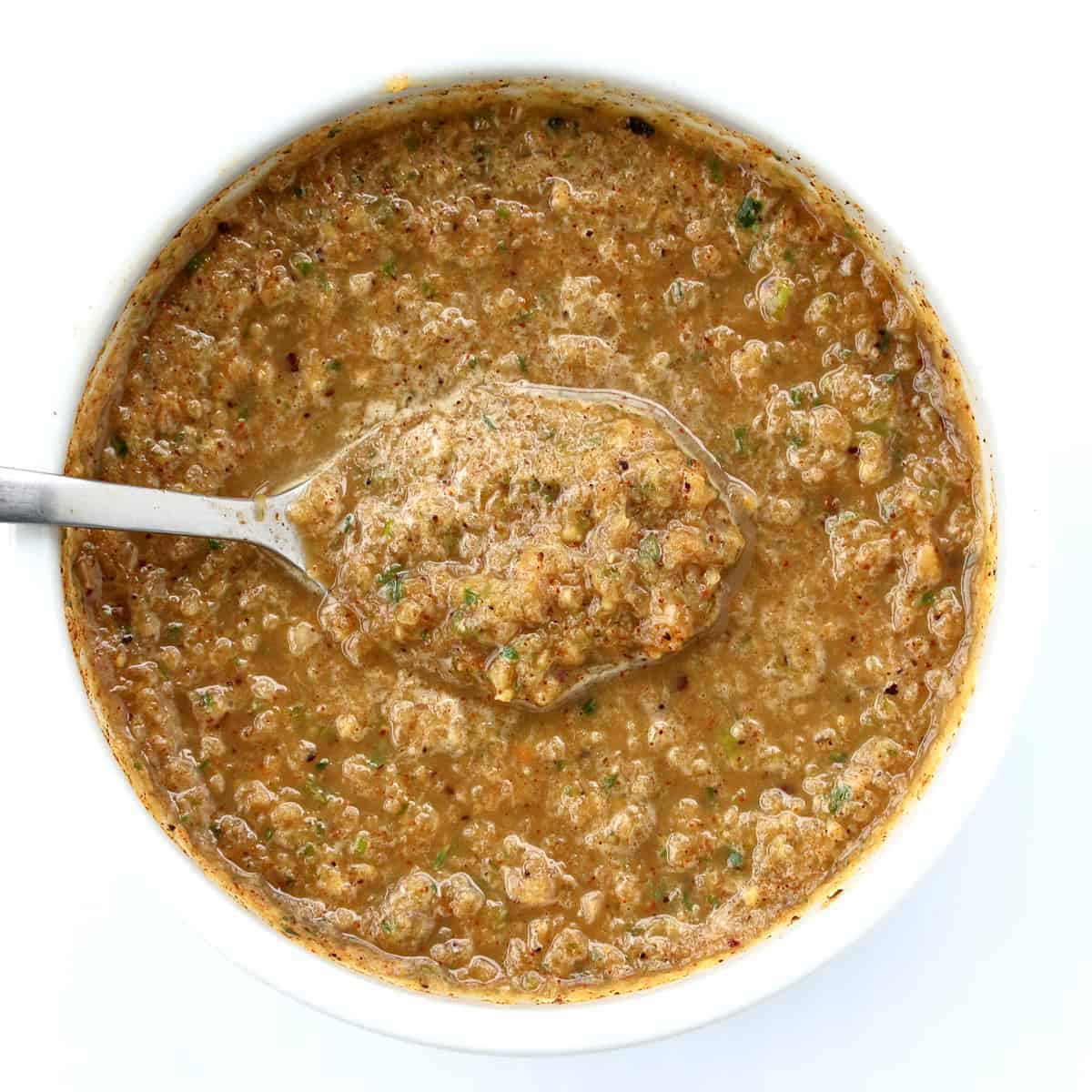 You can make the jerk sauce up to a day in advance.  Then when you’re ready to use it, simply place the chicken pieces in a ziplock bag (or lay them out in a casserole dish with a lid), pour the jerk sauce over the chicken and massage to fully coat them.

Refrigerate and let them marinate overnight, 8-10 hours, or up to 24 hours.  Don’t shorten the marinating time. 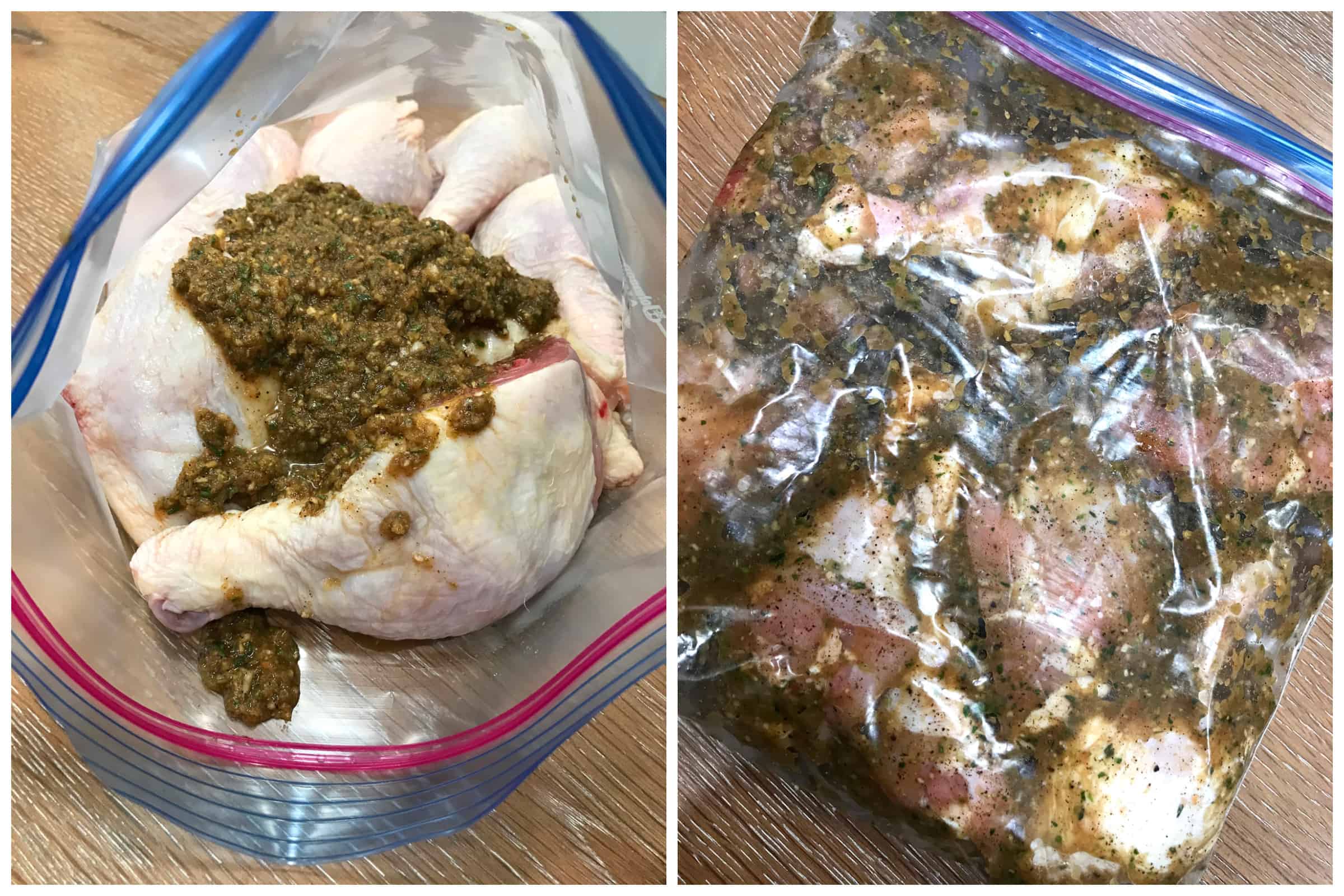 If using a grill:  Preheat to about 400 F.  Rub the grates with oil and grill the chicken until cooked through (internal temp should be 165-170 F), turning the chicken occasionally, about 30-40 minutes

Lay the chicken pieces on a lined baking sheet with a good amount of sauce on them and spread them at least an inch apart.

Pour the remaining sauce into a small saucepan.  Bring it to a boil, then reduce the heat and simmer for 5 minutes.  You can use this sauce both for basting while the chicken cooks and for serving at the table.  (It’s also delicious stirred into steamed rice!) 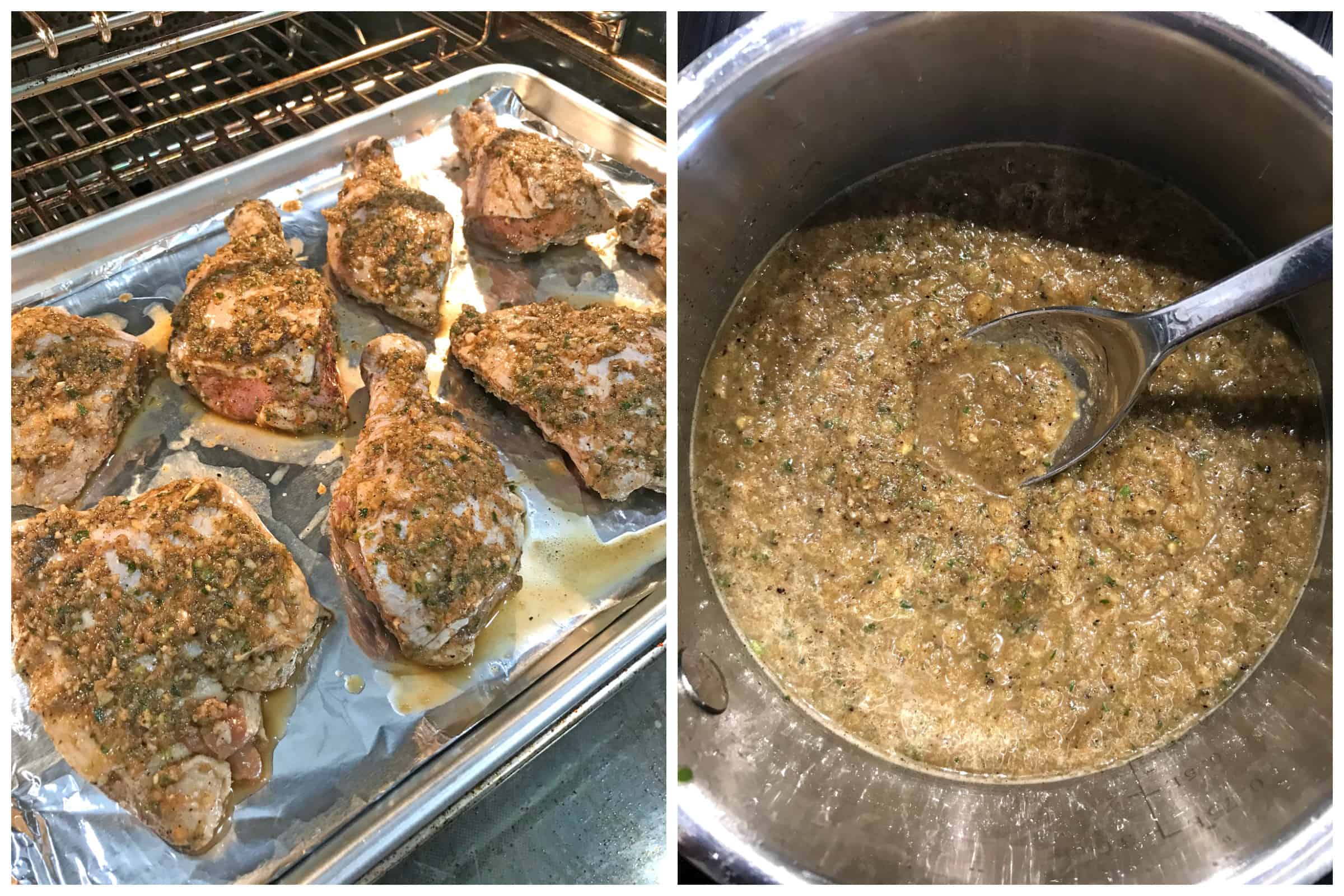 Bake the chicken for 35-45 minutes or until the internal temperature of the chicken reads 165-170 F.

Turn the chicken over at the halfway point and then turn it over again at the end before broiling. 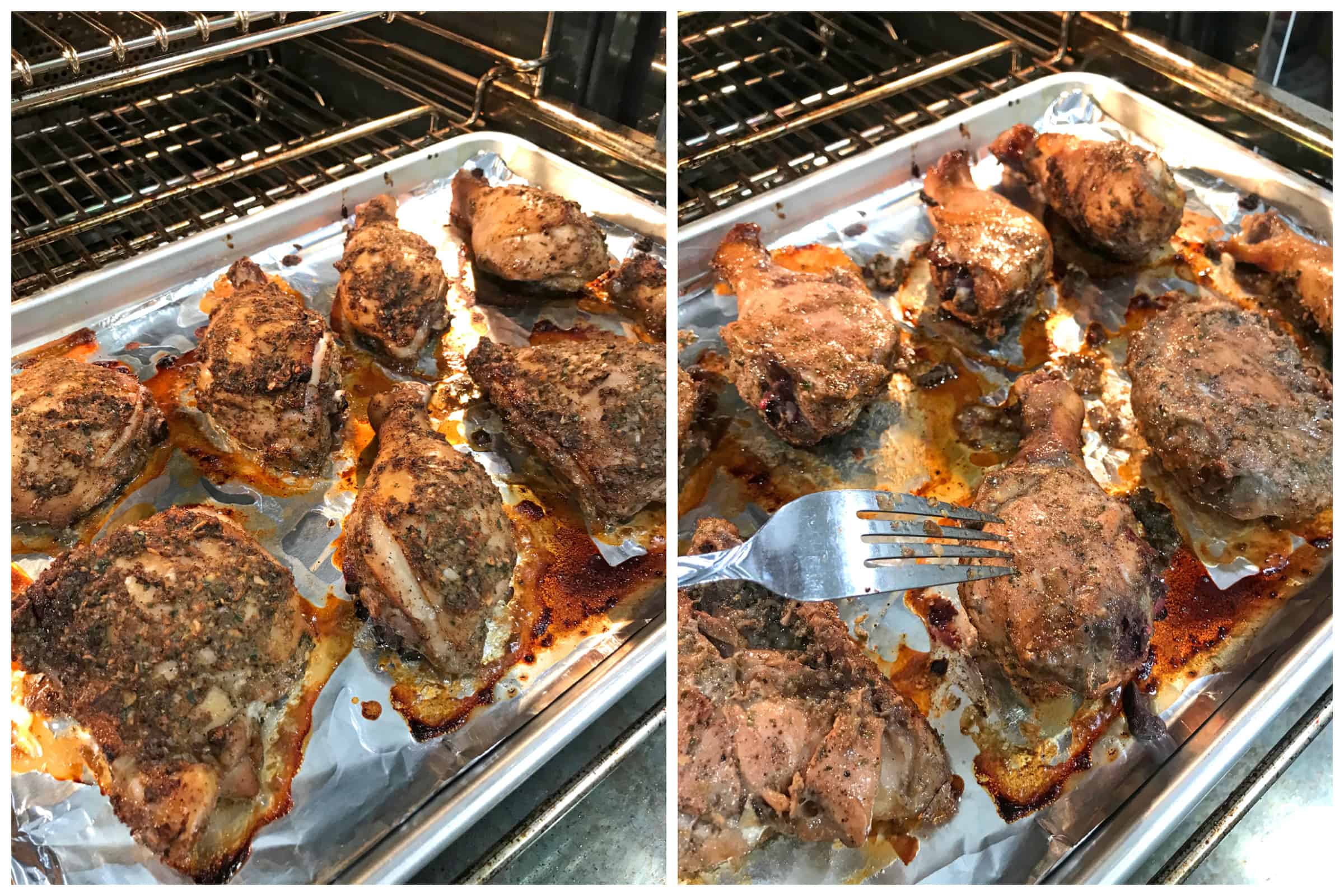 I always recommend using an instant read thermometer.  An all too common problem with baked chicken is overcooking it for fear that it will be raw and then you end up with dry chicken.  Using a thermometer takes the guesswork out of it and you can have perfectly moist, juicy chicken every time.  (I also recommend using these thermometers for bread-baking for the same reason – to prevent bread that is over-baked and dry and to prevent bread that is under-baked and gummy.)  You can get instant read thermometers pretty cheaply.  I use this thermometer.

After turning the chicken over the last time, turn the oven on to broil for a few more minutes to roast chicken until nicely browned. 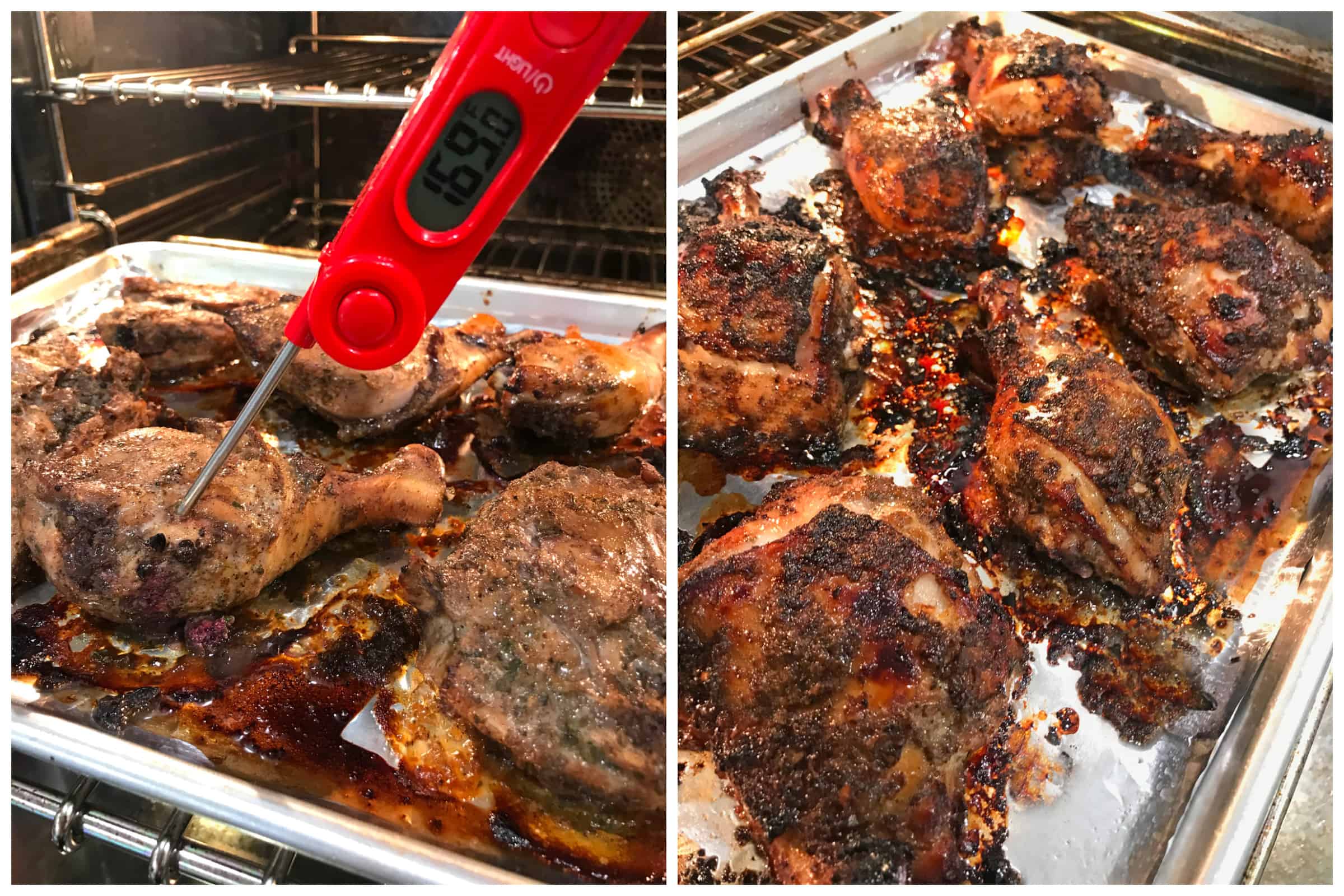 Remove the chicken from the oven and let t rest for a couple of minutes before serving.  See serving recommendations in the post above. 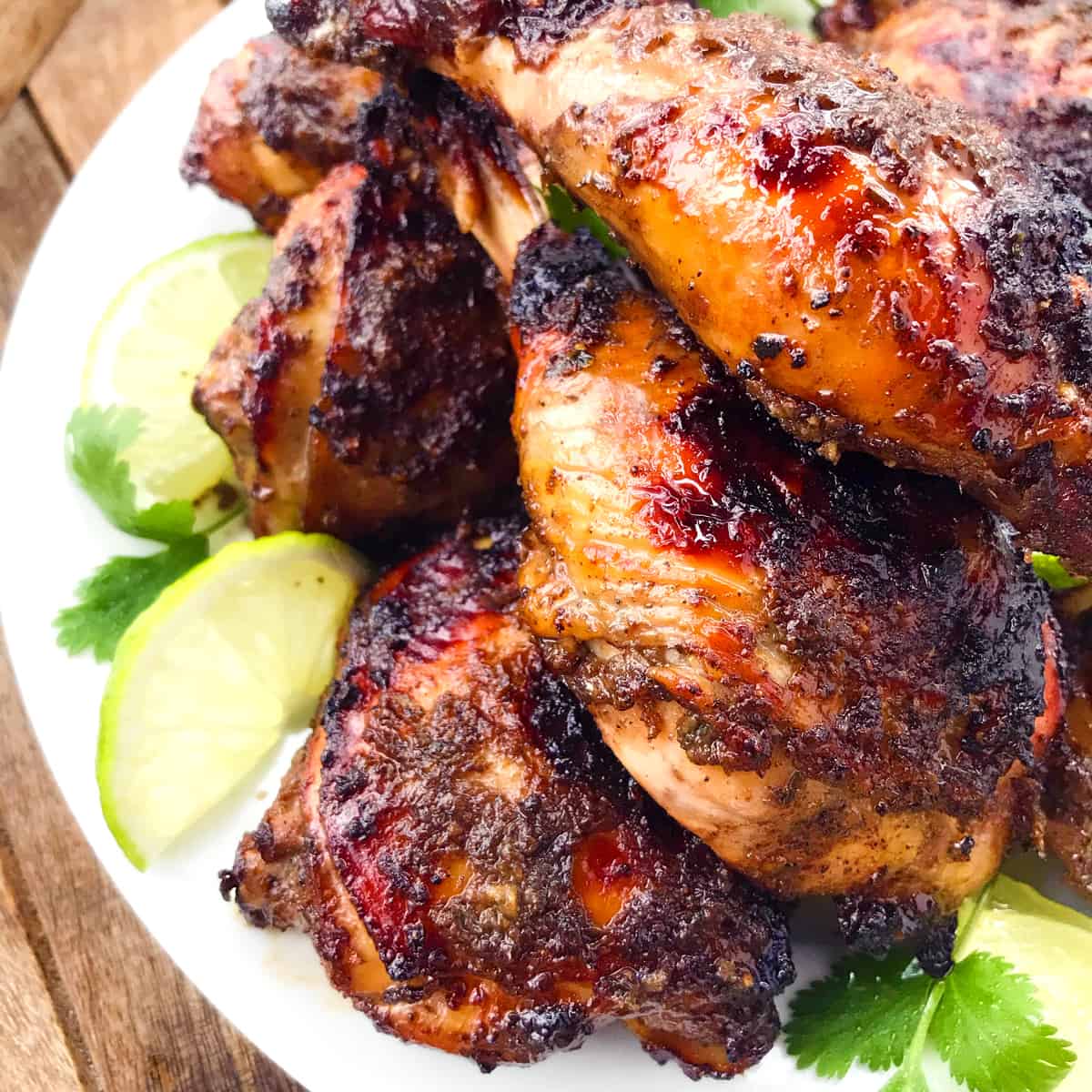 For more delicious grilled chicken recipes from around the world, be sure to try our: 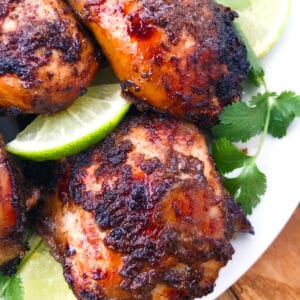 Kimberly Killebrew
Get ready to be transported to the Caribbean island of Jamaica as you take your first bite of this deliciously bold and dynamic, finger-licking chicken!
Print Recipe
5 from 7 votes
Course Entree, Main Course
Cuisine Caribbean, Jamaican
Servings 4
Calories 309 kcal