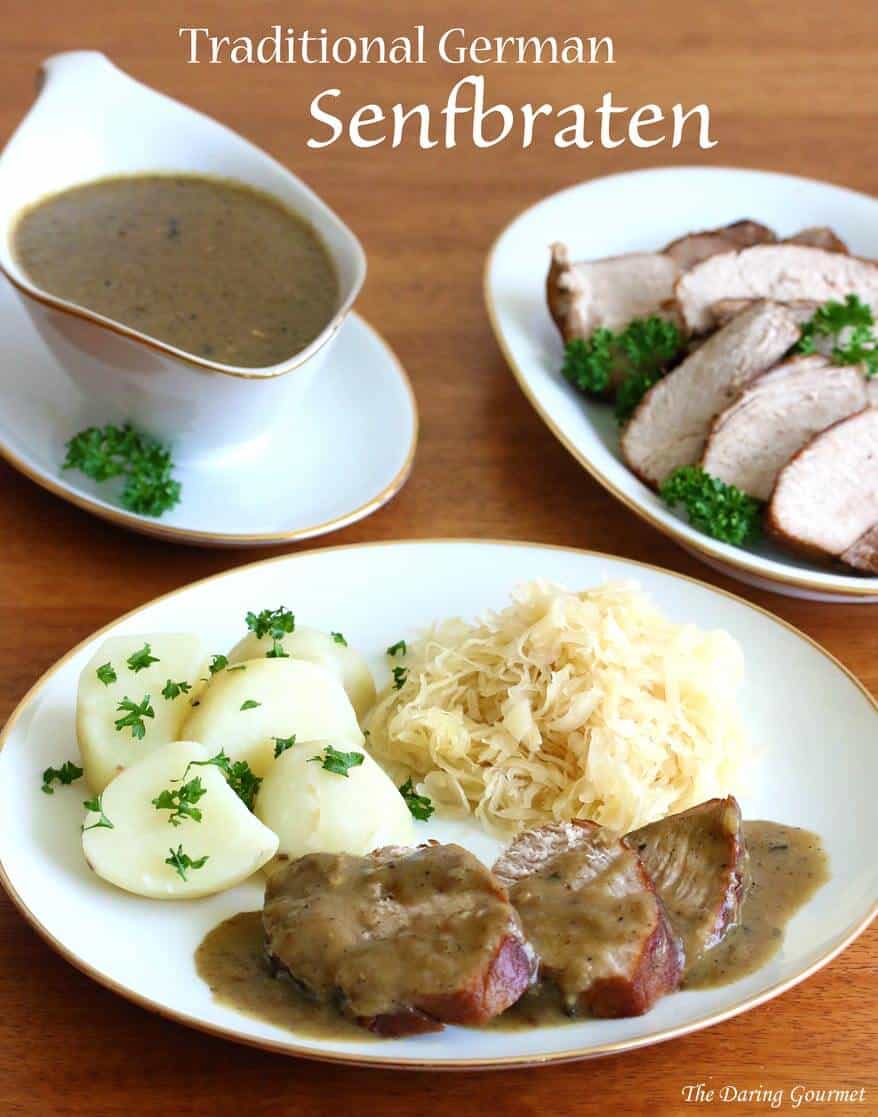 Another quintessential German dish, Senfbraten is a traditional and popular pork roast served throughout Germany.  A deliciously rich gravy flavored with mustard, this authentic dish comes with a satisfaction guarantee.

I come from a musical family and my husband and I are both musicians.  I’m fortunate to have married someone who loves as wide a range of music as I do.  And naturally our children are regularly exposed to music spanning the entire spectrum (with a few exceptions).

I’m also fortunate to have kids who don’t mind riding in the car.  We enjoy talking, listening to music and singing along.  Lately my kids have been taking a more active role in requesting what we listen to and those songs are always rotating, with a few favorites they also come back to.  The four recent most-requested songs of my just-turned 4 year-old son, Liam, are as follows:  Manhattan Transfer’s (one of my faves) version of the 40’s classic “Choo-choo Ch’ Boogie” (trains!  that one’s obvious), Foreigner’s “Say You Will” (not sure why he’s singled that one out, but I won’t argue with it – it’s an awesome song), a boogie-woogie version of the traditional kids’ ABC song (that’s a no-brainer – what’s there not to love about the alphabet?), and Falco’s “Rock Me Amadeus”, which he has a difficult time pronouncing and refers to as “de gas, de gas!”  Again, not sure why that particular song, but I won’t argue that one either – another classic 80’s song that is particularly unique,  about a classical composer (some educational value?), and it’s in German (when I’m too lazy to speak German to my kids I let Falco take over).  Three checks.

And so the other day in the car, 5 minutes from home, Liam requests “de gas” and I so I find it on my ipod and turn it on.  While he’s in the backseat doing his classic Stevie Wonder impression (eyes clenched shut, grinning, and rocking his head back and forth to the music while my almost 2 year-old blonde pig-tailed Emily is bouncing in her seat), I’m trying to figure out what to make for dinner.  The conclusion:  Senfbraten.  What does Senfbraten have to do with Falco or Amadeus?  Well, it’s an established fact that Mozart was eating Senfbraten while composing his triumphant Marriage of Figaro.

Okay, not really.  But he may as well have.  Senfbraten is every bit as pleasing to the palate as the composition is to the ears.

So while you’re making this Senfbraten, turn up Falco’s “Rock Me Amadeus” and have a blast.  (Here, I’ll even provide the link to the YouTube video)  It’s in German, it’s educational (it is, right?), and it’ll help you get your groove on while you’re browning that roast.

And you’ll never be able to eat Senfbraten again without thinking of Falco.  You’re welcome. 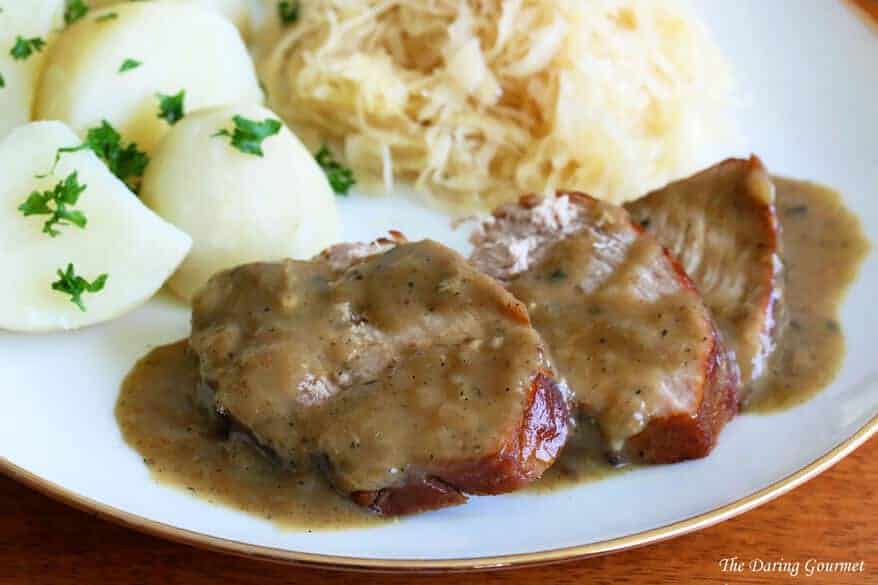 Give the pork roast a good sprinkle of salt and freshly ground black pepper and generously slather it down on all sides with yellow mustard.  If you have access to German mustard, it’s the best.  It has a much different flavor than American mustard and, in my opinion, is much better.

There are several different brands of German mustard – all good – but the one that I use most often and really like is the Alstertor Düsseldorf Style Mustard (click link for convenient access on Amazon). 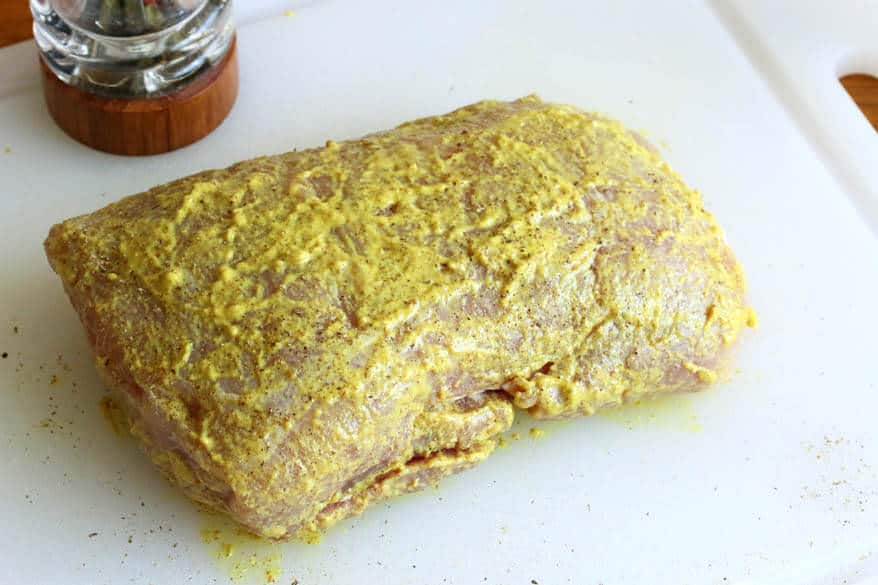 Heat the oil in a Dutch oven over high heat.  Make sure it’s good and hot before you add the roast.  Generously brown the roast on all sides.  This will give the roast and the gravy its magnificent flavor. 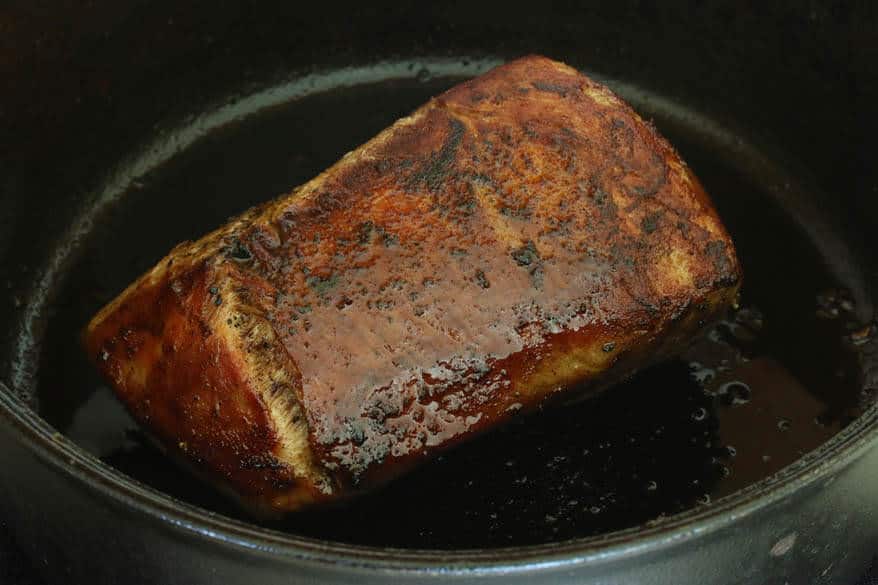 Add the onions and butter and fry for a couple of minutes.  Add the garlic and cook for another minute. 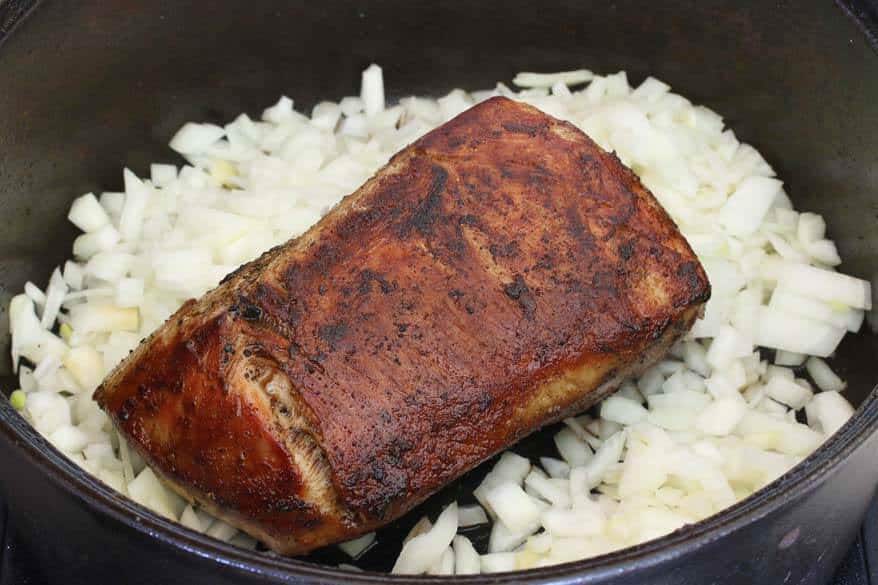 Add the white wine and boil for 2 minutes until mostly evaporated, deglazing the bottom of the pan to loosen the browned bits stuck to the bottom.  Add the bay leaf and the thyme. 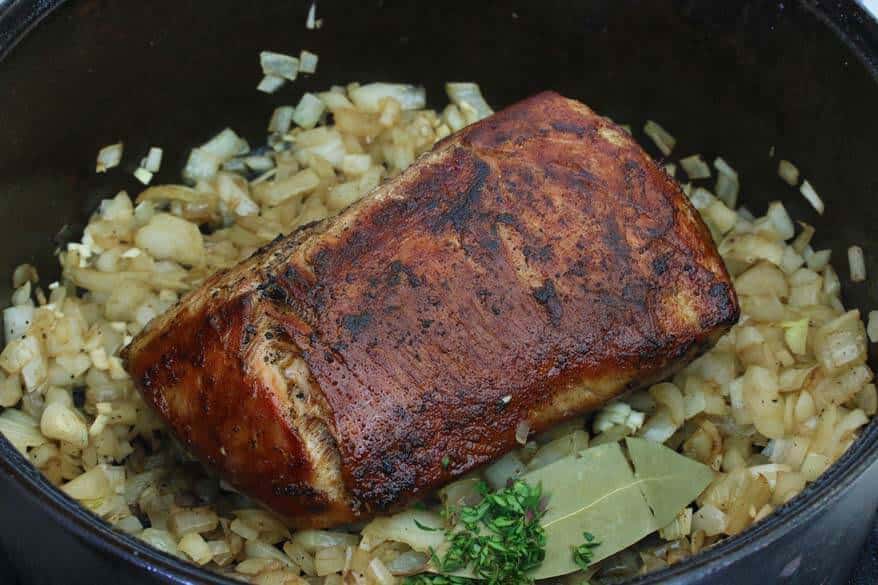 Add the stock and a few carrots (they’ll add a touch of sweetness to the gravy).  Bring it to a boil, reduce the heat to low, cover and simmer for at least 90 minutes or until the roast is nice and tender.  Alternatively, cook the roast in the oven preheated to 325 degrees F for about 3 hours. 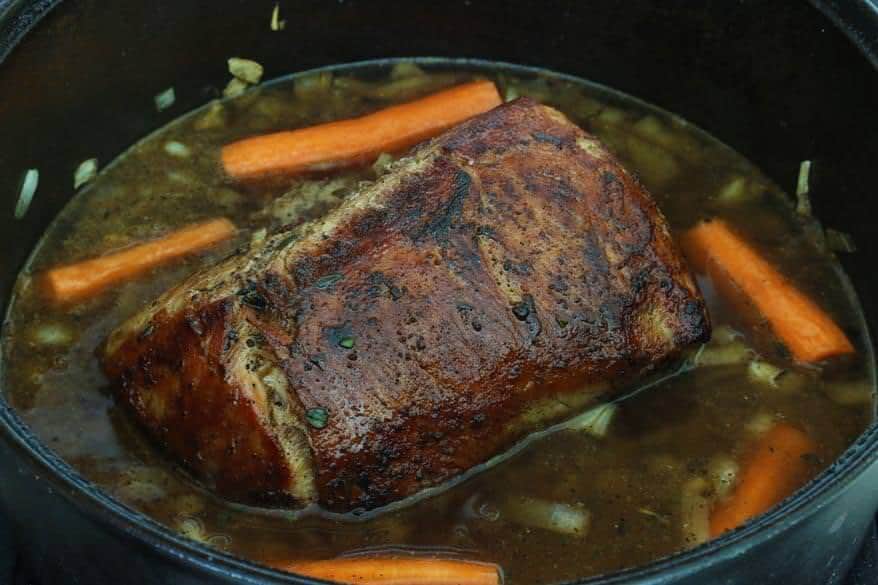 Discard the carrots and the bay leaf.  Make the flour slurry to thicken the gravy. 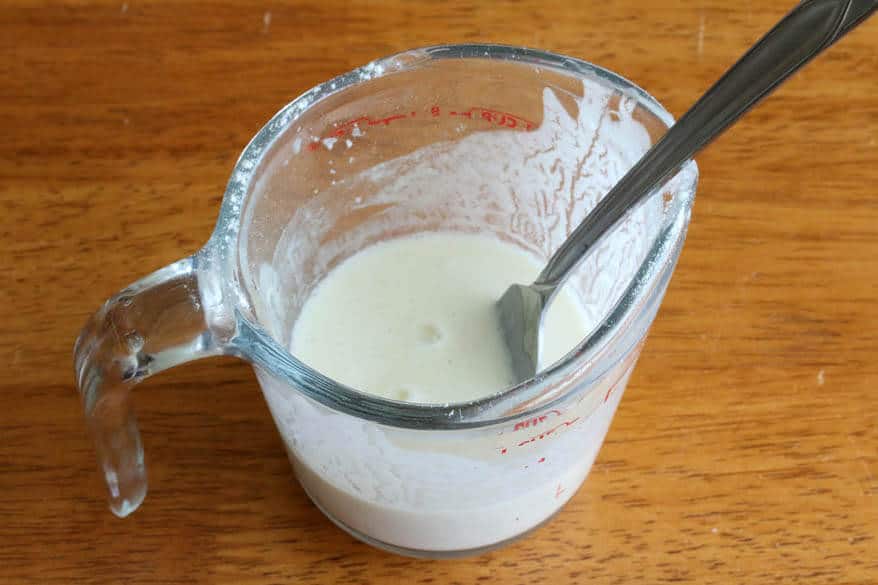 Transfer the roast to a warmed plate and tent with foil to keep warm.  While whisking constantly, gradually pour the flour slurry into the gravy and simmer until thickened.  Add a couple of teaspoons or so of mustard and more salt and pepper to taste. 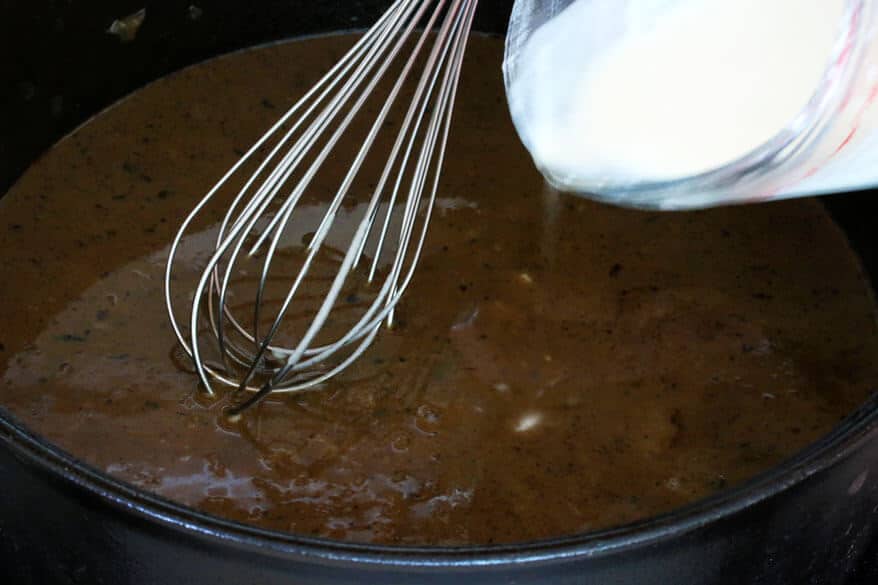 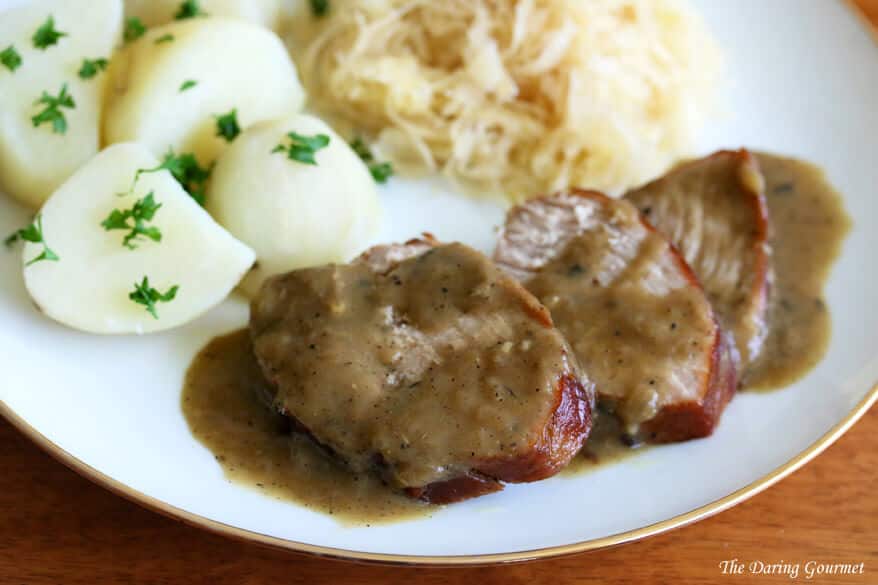 Also traditional is to serve it with Semmelknödel (German Bread Dumplings: 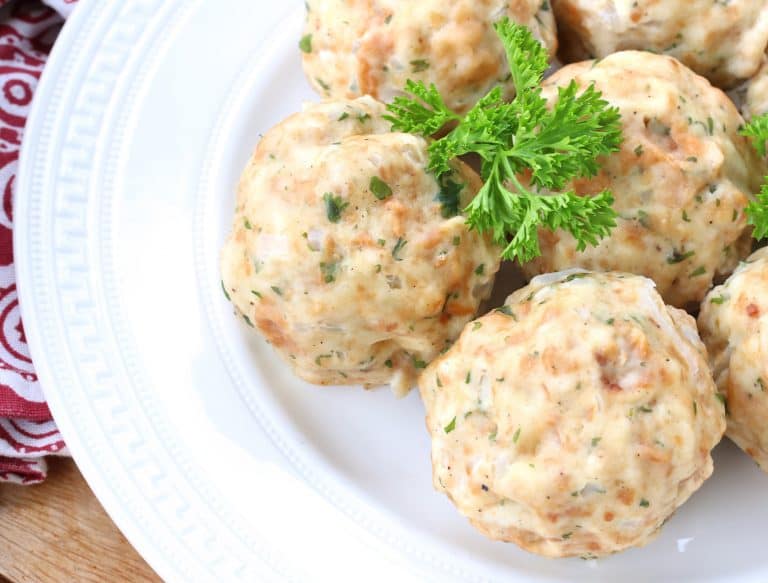 …as well as Spätzle: 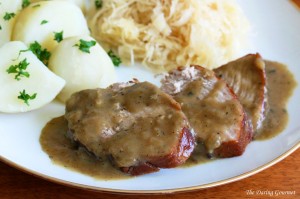 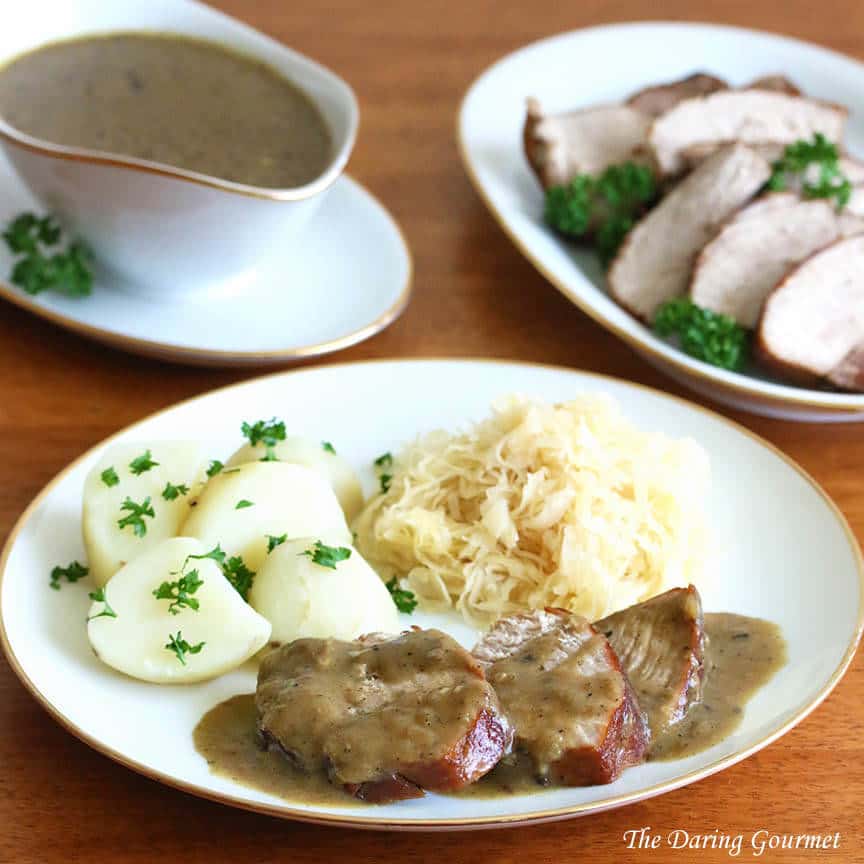