ULTIMATE BEAN GREEN CASSEROLE  Featured in magazines across the web and consistently rated THE best green bean casserole recipe EVER, this will convert even the most determined green bean haters!  Tender green beans, bacon, cheese, cream, mushrooms and more, this deluxe green bean casserole is made from scratch and is guaranteed to become your go-to from now on!  We promise! 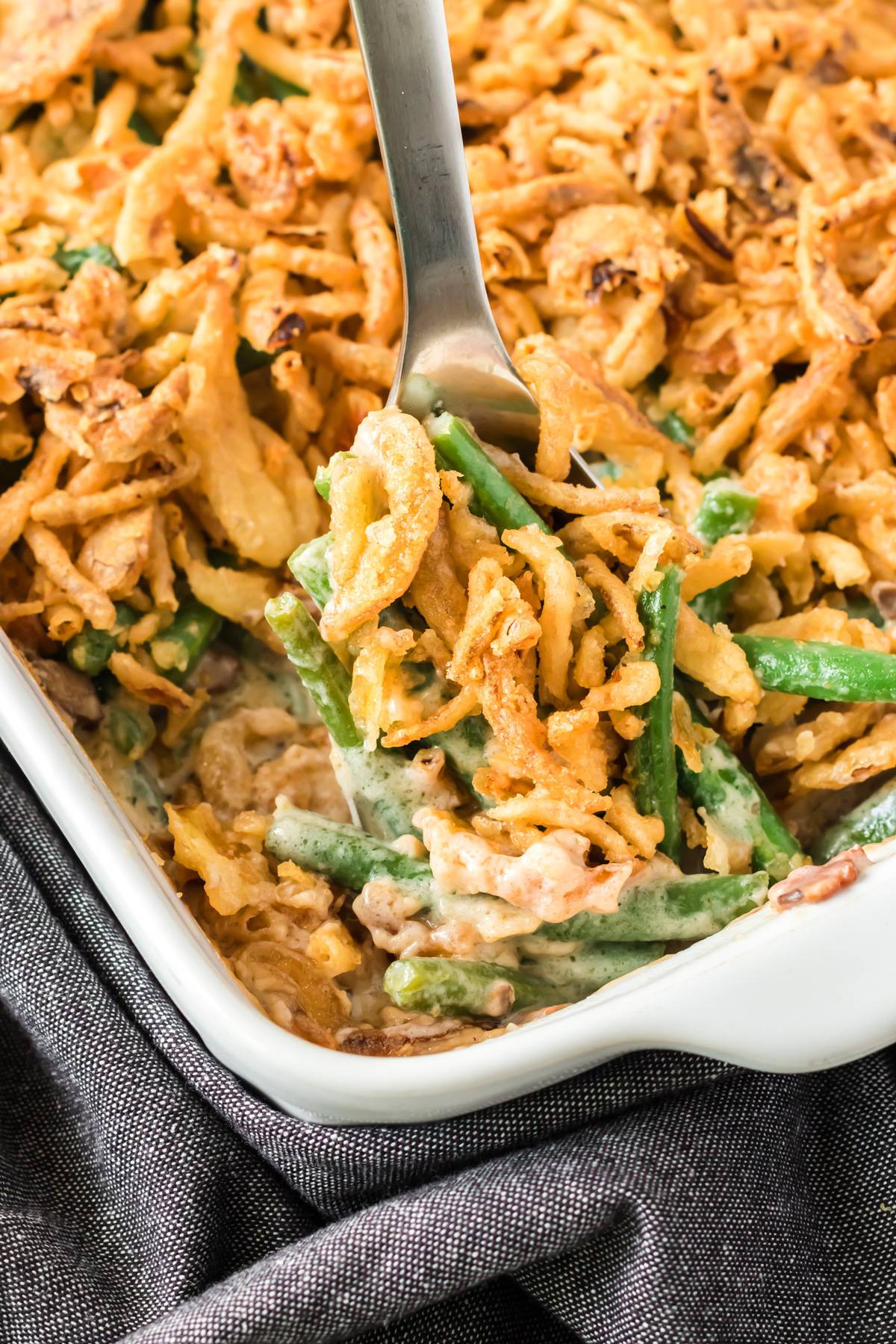 Green Bean Casserole:  The quintessential American side dish for family gatherings, holidays, church socials, potlucks…the recipe clipping that virtually every American woman has had lying somewhere at some point throughout the past gazillion decades.  Only this one is different.

This one’s the best.  Ever.

And it’s made from scratch.

I developed this recipe years ago when I had about two pounds of fresh organic green beans and some fresh mushrooms that I needed to use up.  As I browsed through my fridge I also noticed some thawed bacon, a block of white cheddar, and some half-and-half cream.  The wheels started turning as the blueprint for the ultimate green bean casserole recipe unfolded in my mind.  And the rest is history.

This ultimate, from scratch green bean casserole has since become one our most popular recipes every Thanksgiving and Christmas.  Multiple websites have praised it and online magazines have linked to it.  But most importantly of all, year after year our readers have fallen in love with it.  Just read all the rave comments below.  Without exaggeration this green bean casserole has literally become world famous.  Yes, it’s THAT good! 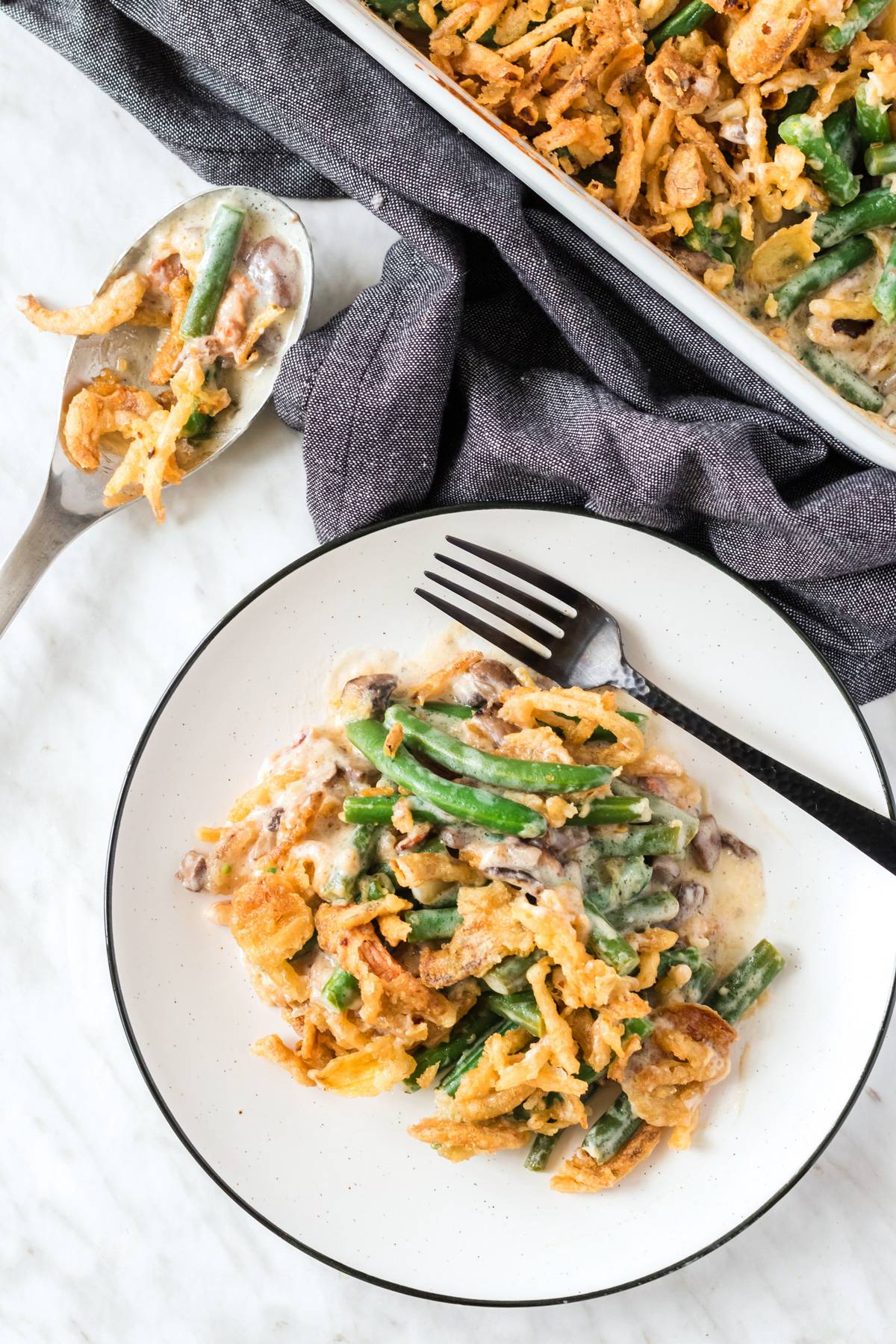 Even passionate green bean and green bean casserole haters have consistently been converted through this recipe.  My brother included.  My brother has hated green beans ever since he was old enough to say the word.  And he has never once relented.  But…he ate this.  He ate THIS!   He ate it…and he liked it!  And as far as I’m concerned that seals the deal.  Verdict drawn.

This recipe take a little longer than the 2 minutes and 38 seconds required to open a can of condensed mushroom soup, mix it with water, toss it with green beans, dump the mixture into a casserole dish, sprinkle with French fried onions, and put it in the oven to bake (ie, the classic recipe first introduced by Campbell’s in 1955).  But this Ultimate Green Bean Casserole is still quick to make and to say that there is no comparison between the two is the understatement of the century.  This isn’t called “ultimate” for no reason and we’re confident you’re going to love it as much as we and thousands of others do! 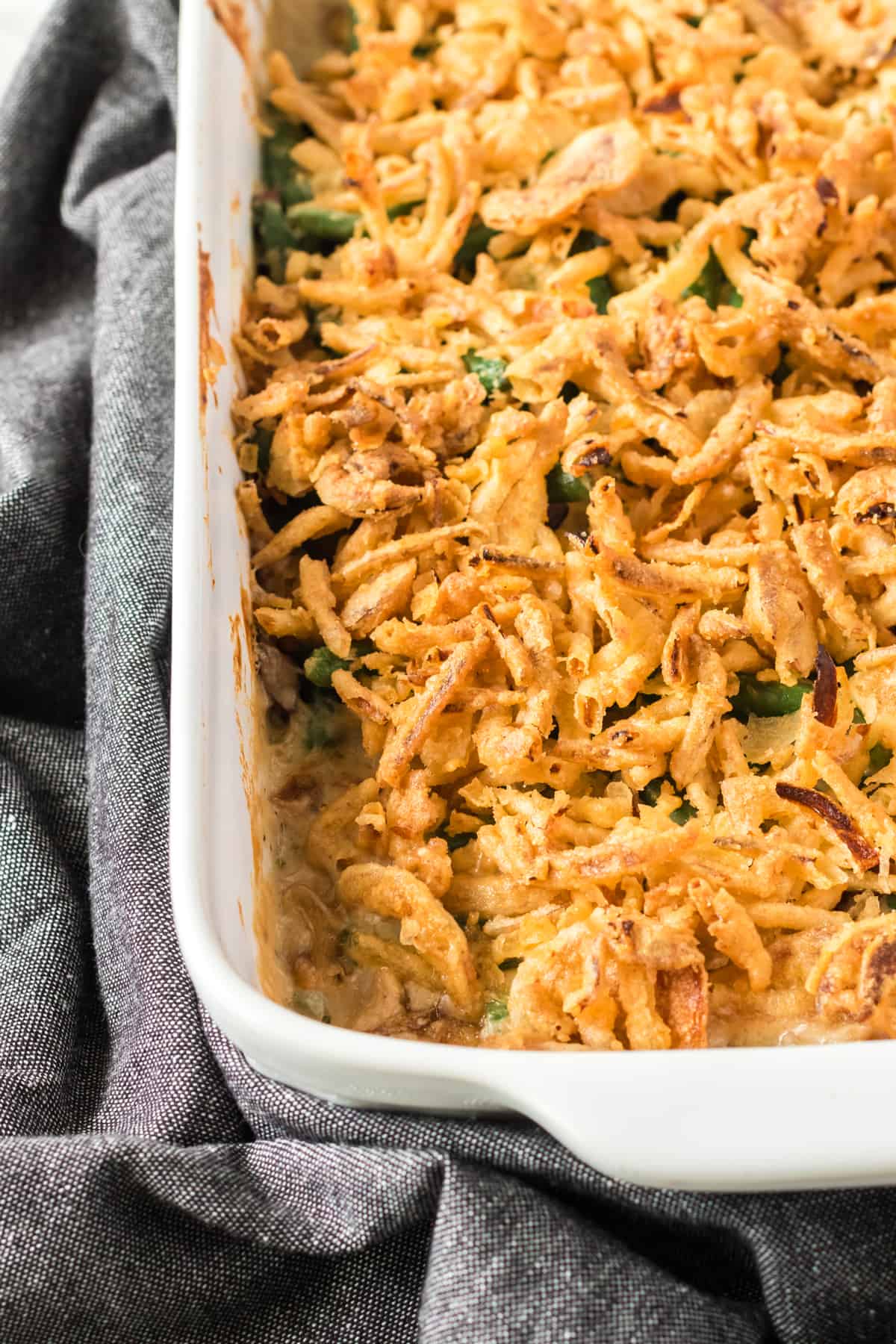 Yes!  You can substitute gluten free flour for thickening the sauce.  Alternatively you can dissolve 1 1/2 tablespoons of cornstarch in the chicken stock and then proceed with melting the butter, then adding the half and half and chicken stock/cornstarch, and whisking continually as it simmers until it’s thickened.

For the onions you can use gluten free French fried onions.

Can You Freeze Green Bean Casserole?

We do not recommend it.  Creamy sauces have a tendency to break and separate when they’re frozen and thawed and the last thing you want is a watery mess at your dinner table.

Can Green Bean Casserole Be Made Ahead of Time?

This also makes it convenient to bring the assembled casserole (minus the French fried onions) to another location where you’ll be having dinner and then simply add the onions and bake the casserole once you arrive. 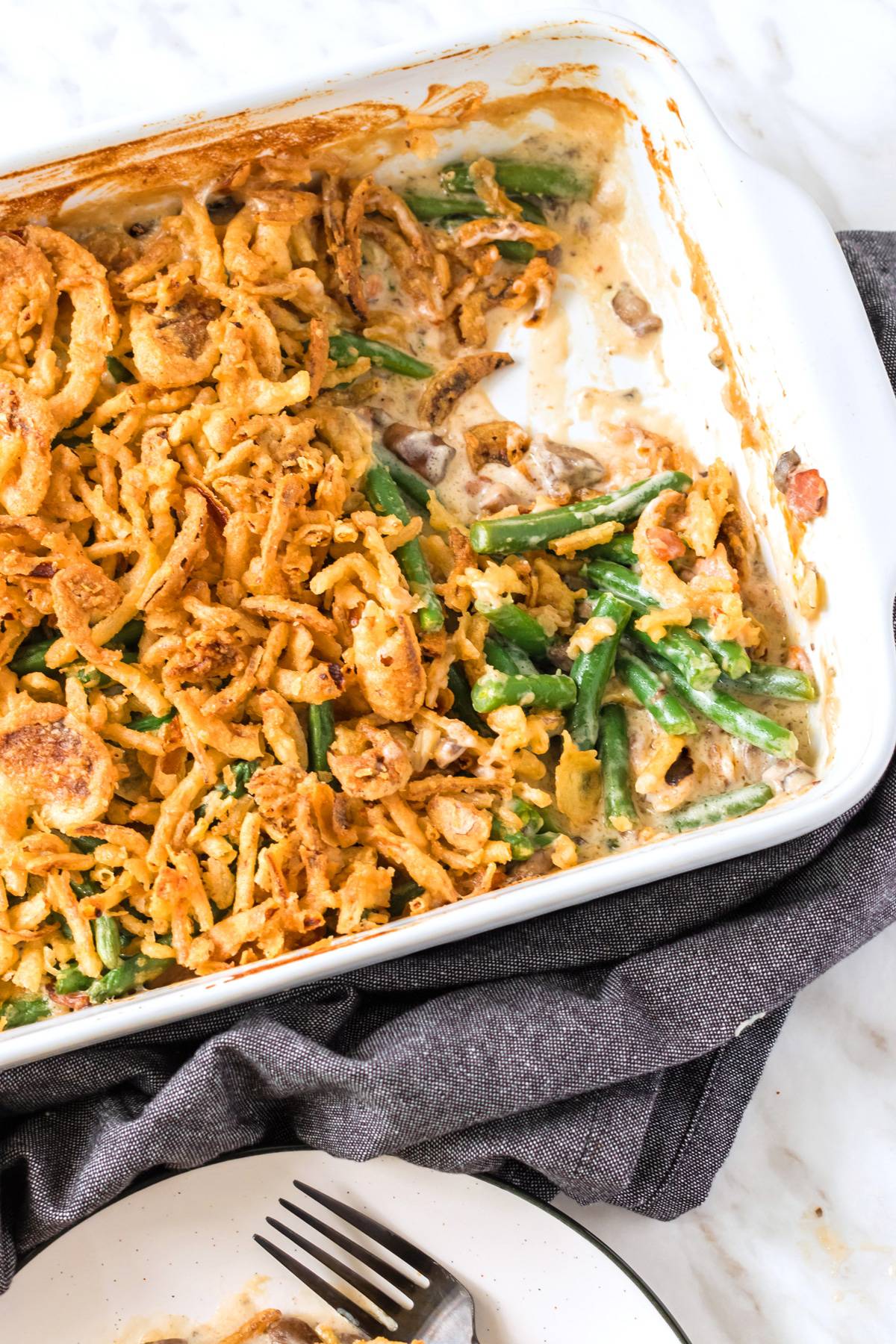 This recipe begins by frying up bacon along with onions, mushrooms, and garlic.  Next we make a roux with butter and flour which will not only serve as a thickener for the cream sauce but will add wonderful depth of flavor.  Next we pour in the cream followed by that glorious white cheddar and watch it melt into a rich, luxuriously delicious sauce.  Fresh green beans are then folded in the sauce, the mixture is poured into a casserole dish and topped with crispy, crunchy, utterly irresistible French fried onions.  It’s baked until bubbly and oozing and then served at the table where it will completely disappear, every last drop of it, within minutes.

Fry the bacon in a large skillet over medium-high heat until crispy. 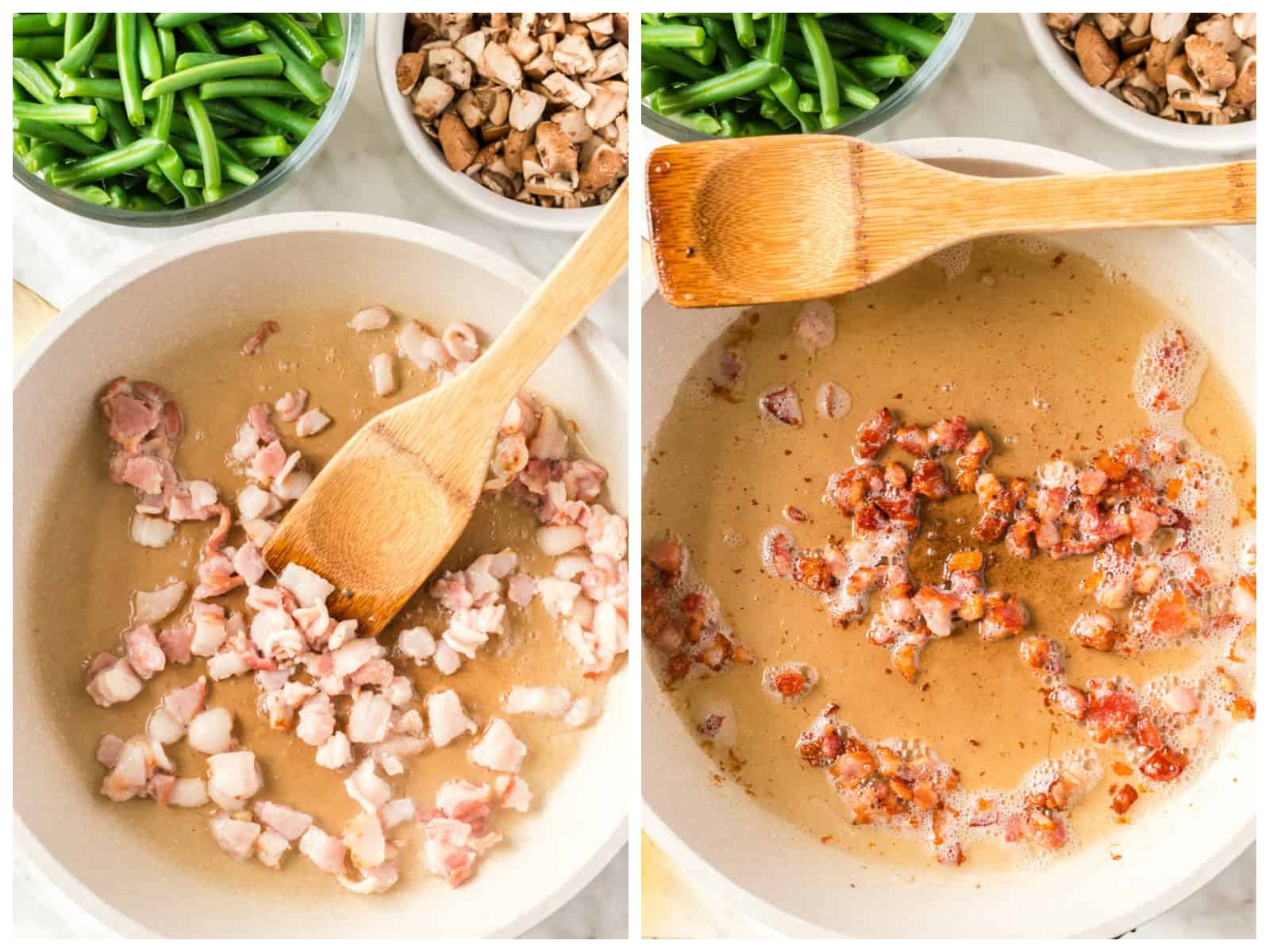 Add the onions and cook for 4-5 minutes until soft and translucent. 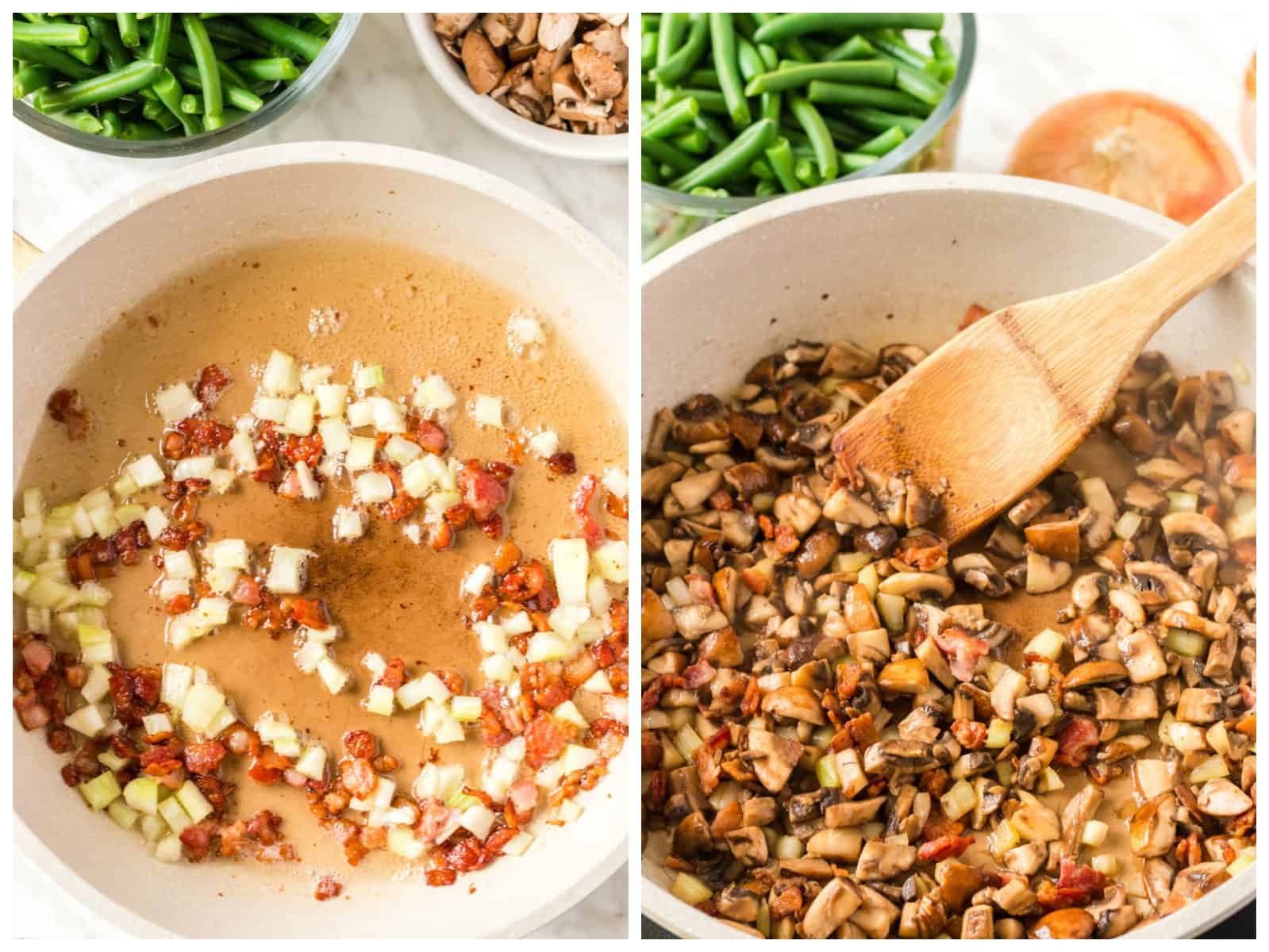 Melt the butter in the same skillet, add the flour, and whisk until combined.

Continue whisking for another minute until the mixture has slightly deepened in color.  This will add flavor and cook off the “flour” flavor. 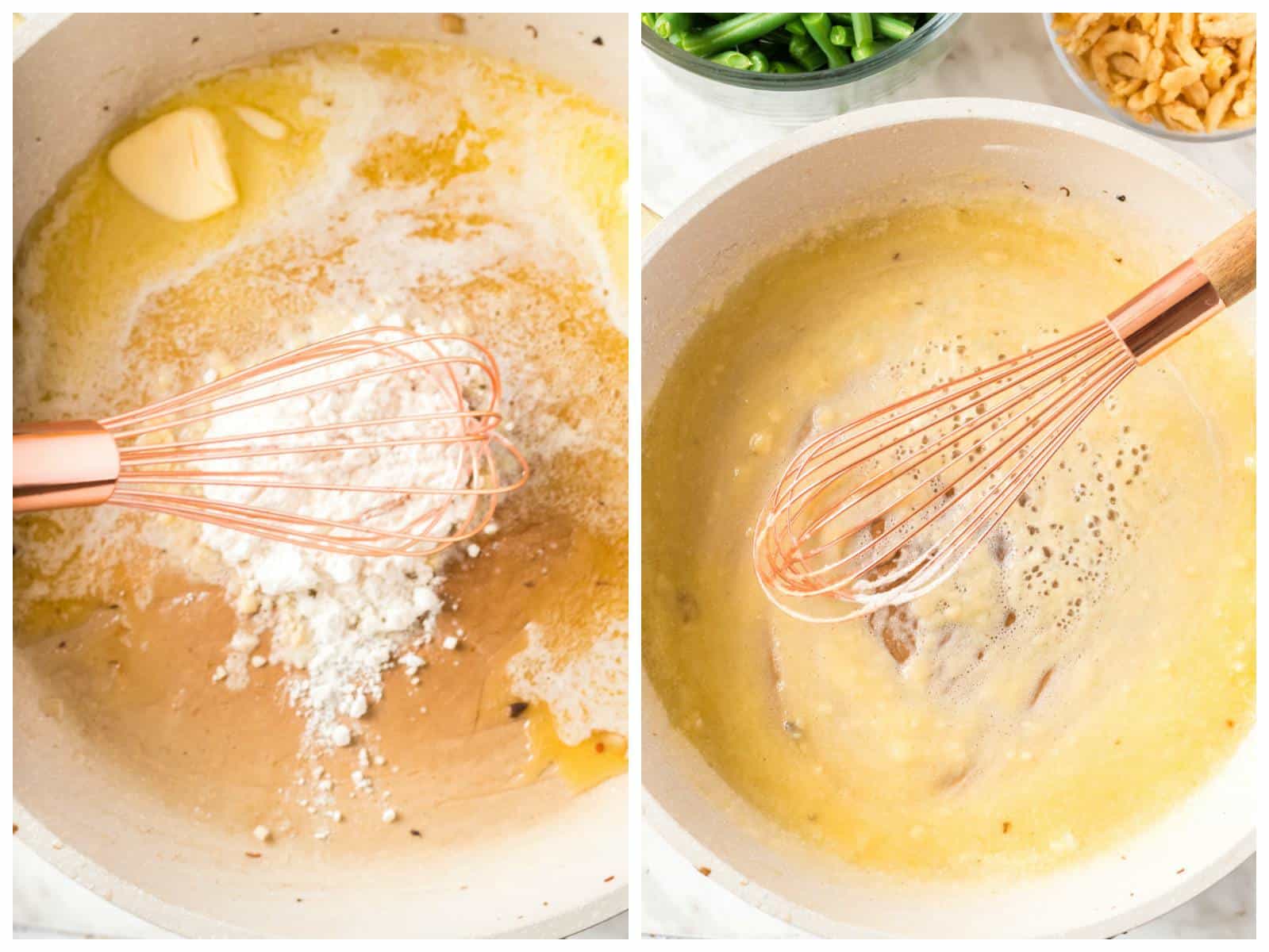 Whisk in the half-and-half and chicken stock and continue to whisk, letting the mixture simmer, until it has slightly thickened.

Whisk in the white cheddar cheese until combined.  Add the bacon/mushroom mixture and stir to combine.

Add the salt and pepper.  Let the sauce simmer for a couple of minutes, stirring frequently. 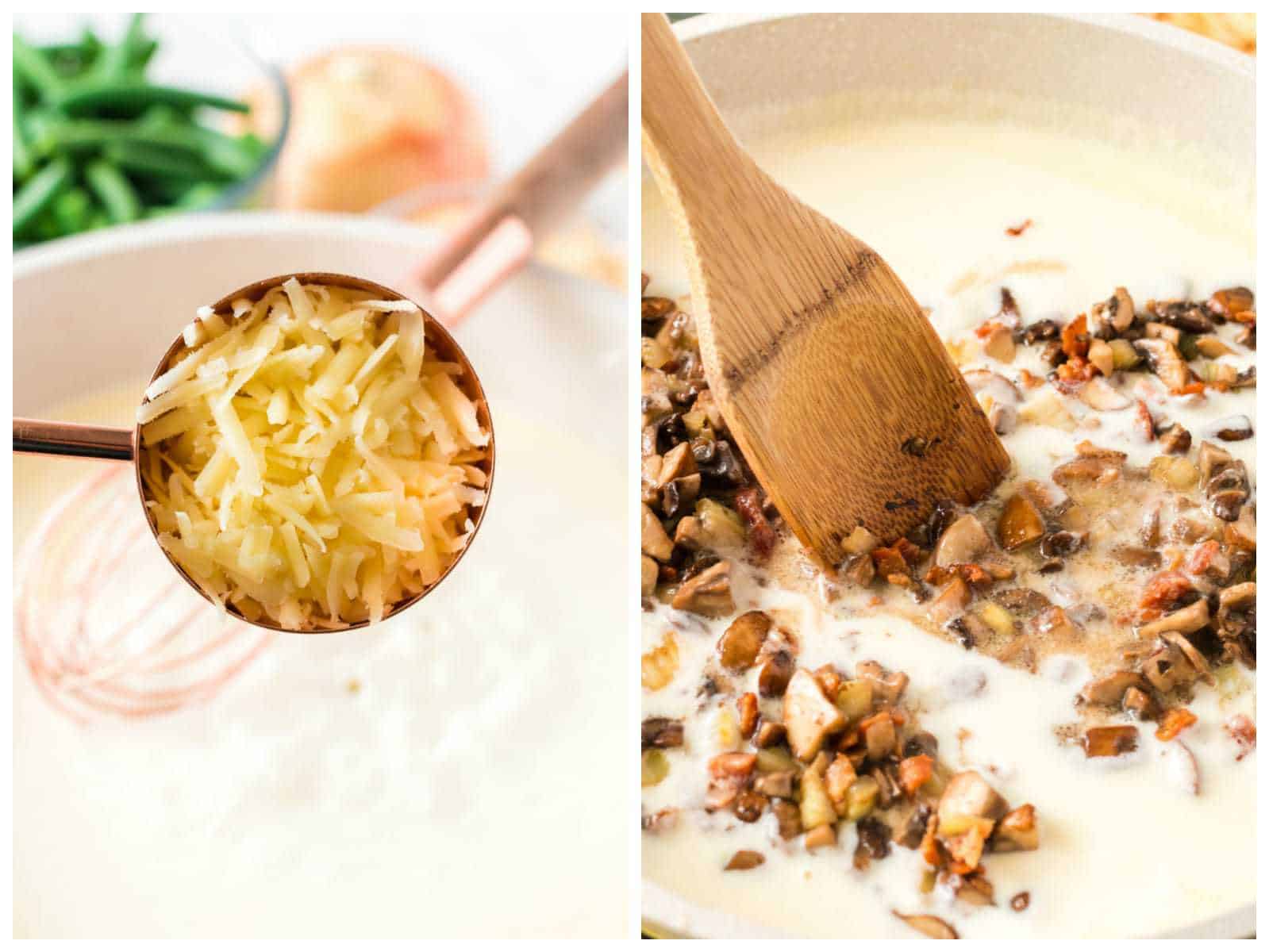 Add the blanched green beans and stir to thoroughly combine.

Pour the bean mixture into a 9×13 inch casserole dish.

Sprinkle all of the French fried onions evenly over the casserole.

NOTE:  Since everything but the French fried onions that go on top is made from scratch, choose some quality ones and avoid using those nasty hydrogenated-oil-packed French fried onions (of course you also have the option of making them yourself!). There are better options out there.  I had two in my pantry to choose from.  I went with Lars’ Crispy Onions this time (the 3-pack is the best deal). 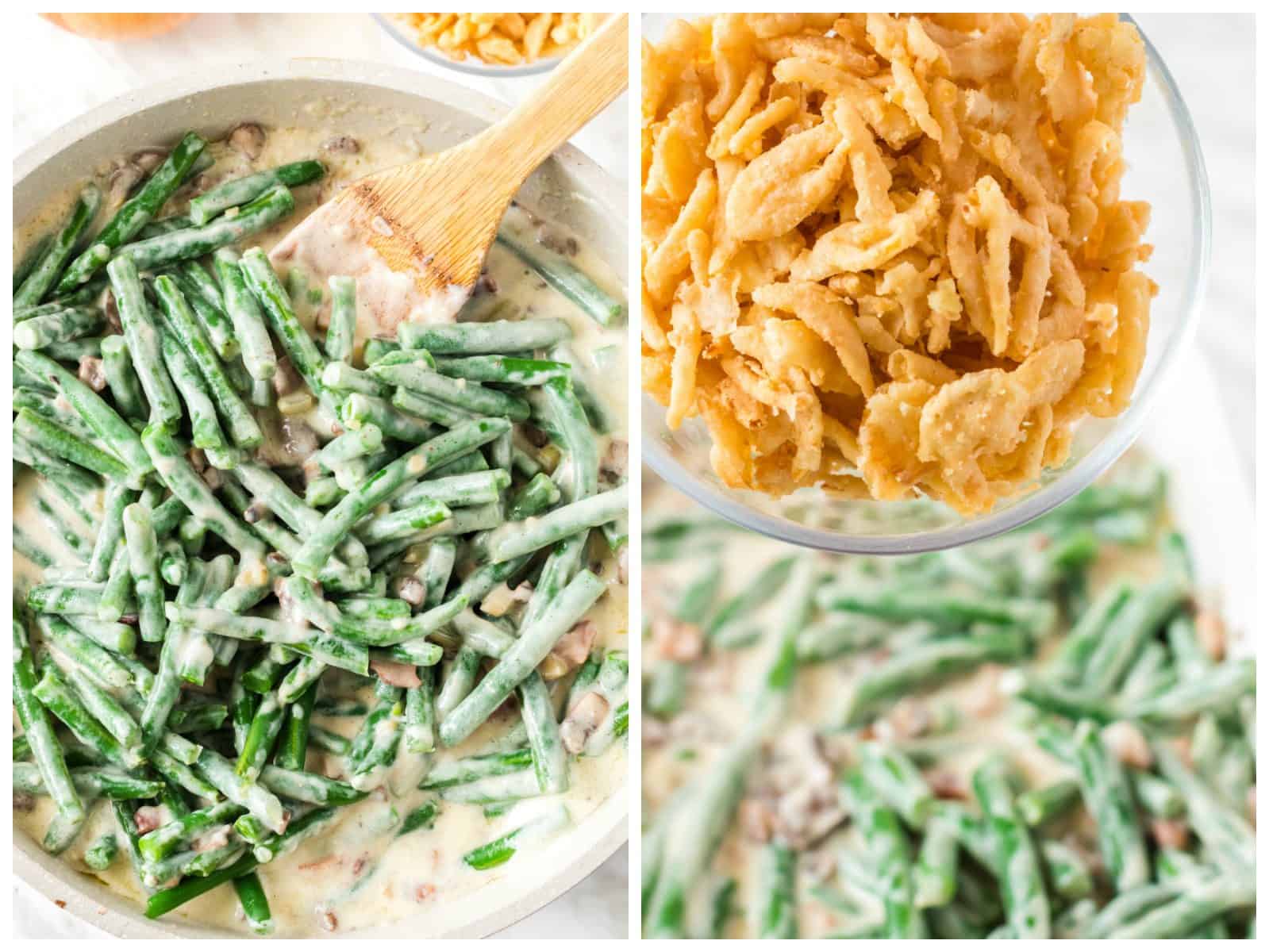 Bake, uncovered, for 30 minutes in an oven preheated to 350 degrees F.

Let the casserole sit for about 5 minutes before serving. 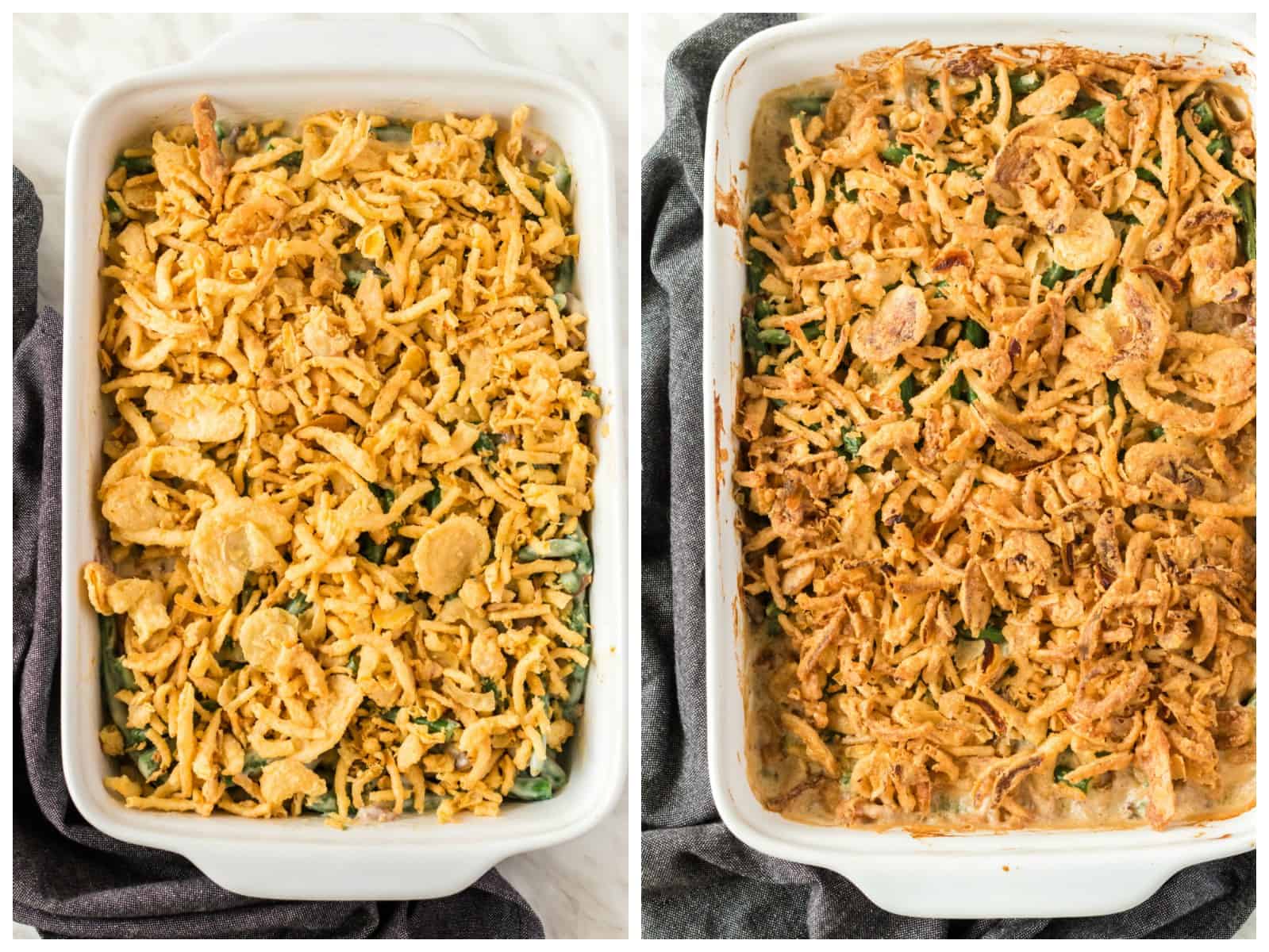 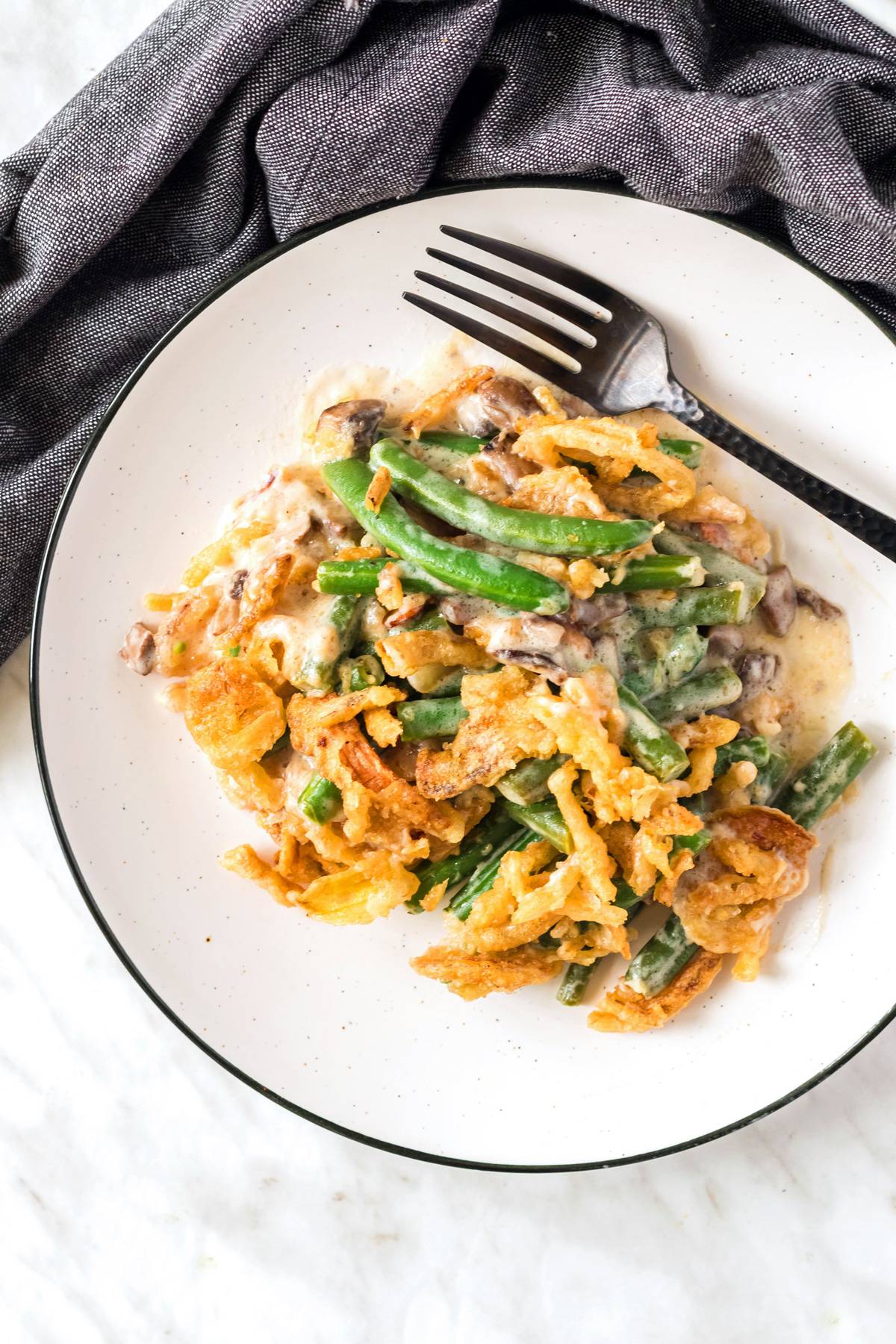 For another showstopping side dish, be sure to try our ever popular: 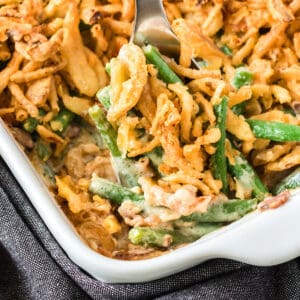 Preparing in Advance: Everything can be done in advance except for adding the crispy onions, otherwise they'll get soggy. Add those just before baking. Also, let the casserole sit for at least 30 minutes after removing it from the fridge before baking. 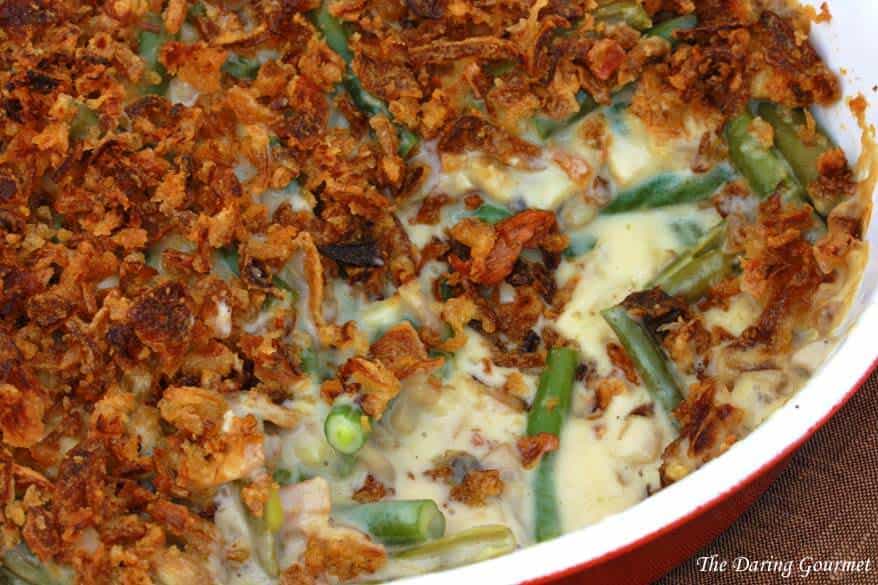 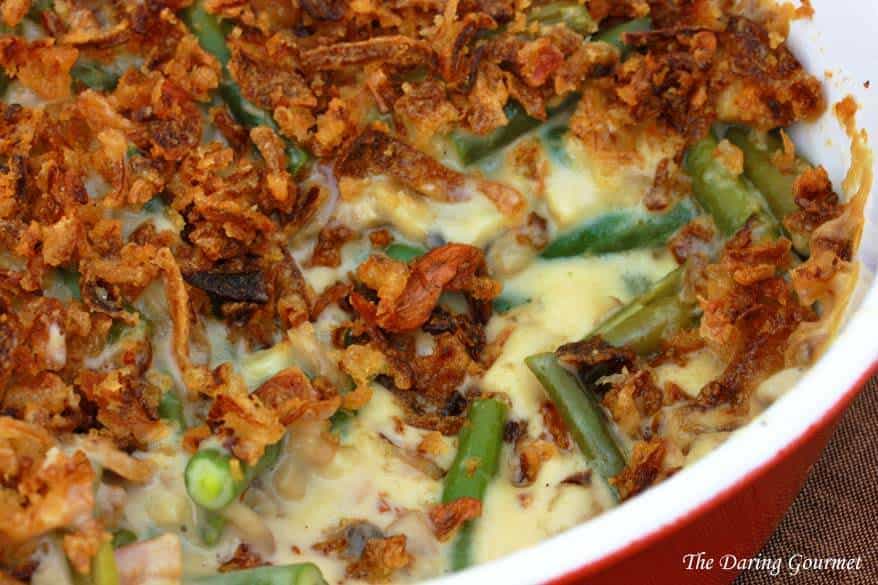