Wonderfully fragrant and bursting with flavor, this Masoor Dal recipe comes together in 30 minutes and will absolutely “wow” your taste buds! 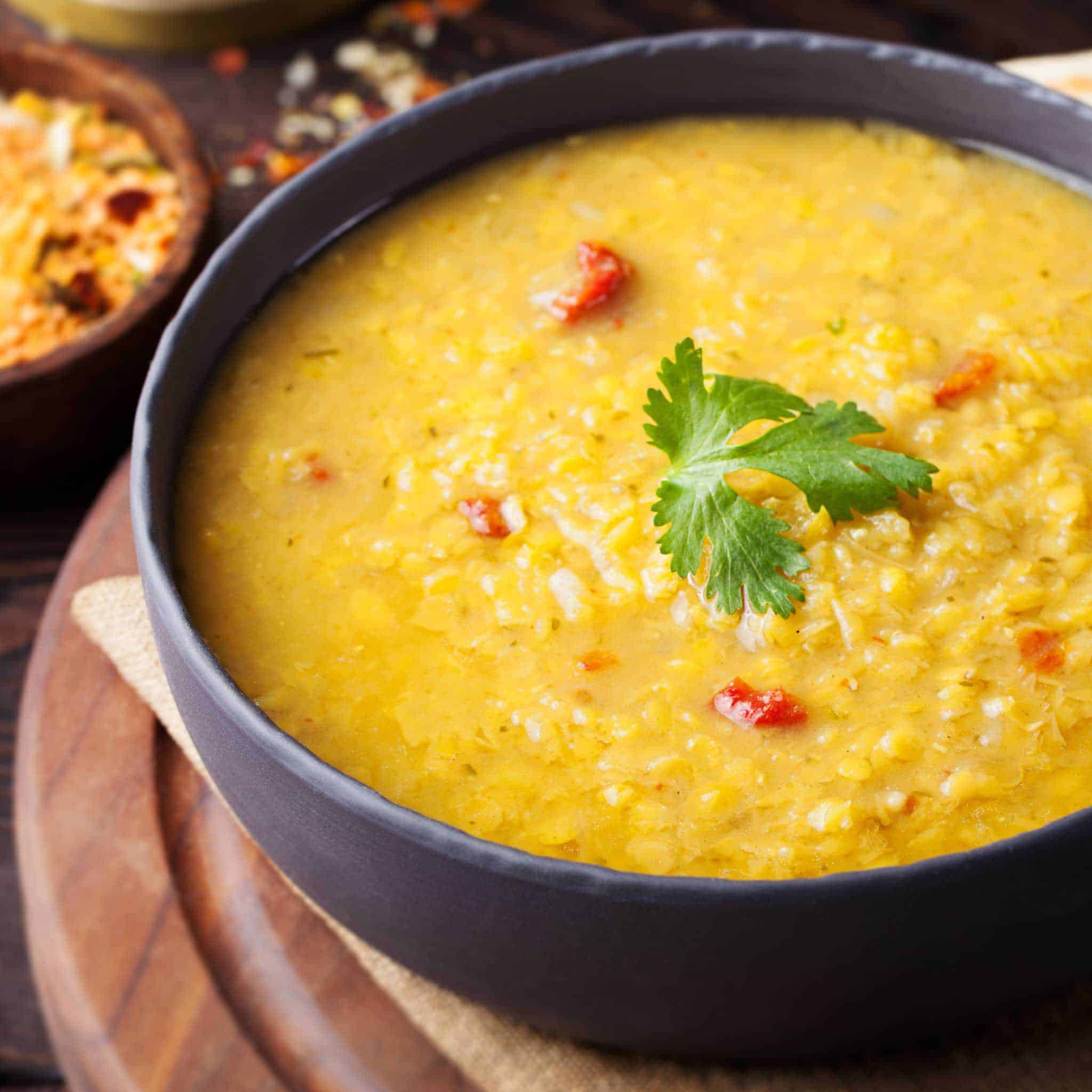 Masoor Dal is a classic, traditional Indian dish made with red lentils.  Lentils are an everyday staple throughout India, an especially important staple for those regions that enjoy a predominantly vegetarian diet.  Lentils are nutritious and a great source of protein, fiber, B vitamins, iron and zinc.  Lentils do not require soaking and are quick and easy to prepare.

Bursting with flavor,  Masoor Dal blends a variety of aromatic and flavorful spices, including a very unique and interesting spice that you may or may not have used before:   Asafoetida.

Asafoetida is commonly used in cooking throughout India and has a very unique aroma and flavor.  It’s a fantastic spice, a little of which goes a long way in adding flavor and aroma.  Asafoetida is made from the sap of an underground tap root.  In addition to its culinary uses, it also has several medical applications.  It has historically been used to fight the flu, aid digestion, serve as an anti-epileptic, anti-microbial, and is an important spice used in ayurvedic medicine.

Asafoetida is used for its flavor and aroma and also serves a logistical culinary purpose:  It reduces flatulence!  And so it is commonly used in legume and lentil dishes to help alleviate that unfortunate little side effect.

It seems history enjoys an either love or hate relationship with asafoetida.  The two extremes are reflected in the various names it goes by.  Besides its other common name, hing, asafoetida is also known as “food of the gods” and…”Devil’s dung”.  Two polar opposites indeed!   A 16th century text notes, “If used in cookery, it would ruin every dish because of its dreadful smell.”  Asafoetida has also made appearances in movies and novels, including Sinclair Lewis’ 1925 classic novel, Arrowsmith, wherein the protagonist had to smell the spice as part of a fraternity initiation.

Nevertheless, despite its bad rap in some circles, it is absolutely loved and cherished in others.  You’ll have to decide for yourself which camp you’re in.  As for me, I love the stuff!   It can be purchased in Indian grocery stores or you can buy it here on Amazon.

Note:  You’ll definitely want to keep it stored in an airtight container.  If you spill any in your spice cabinet, the aroma will permeate your house! 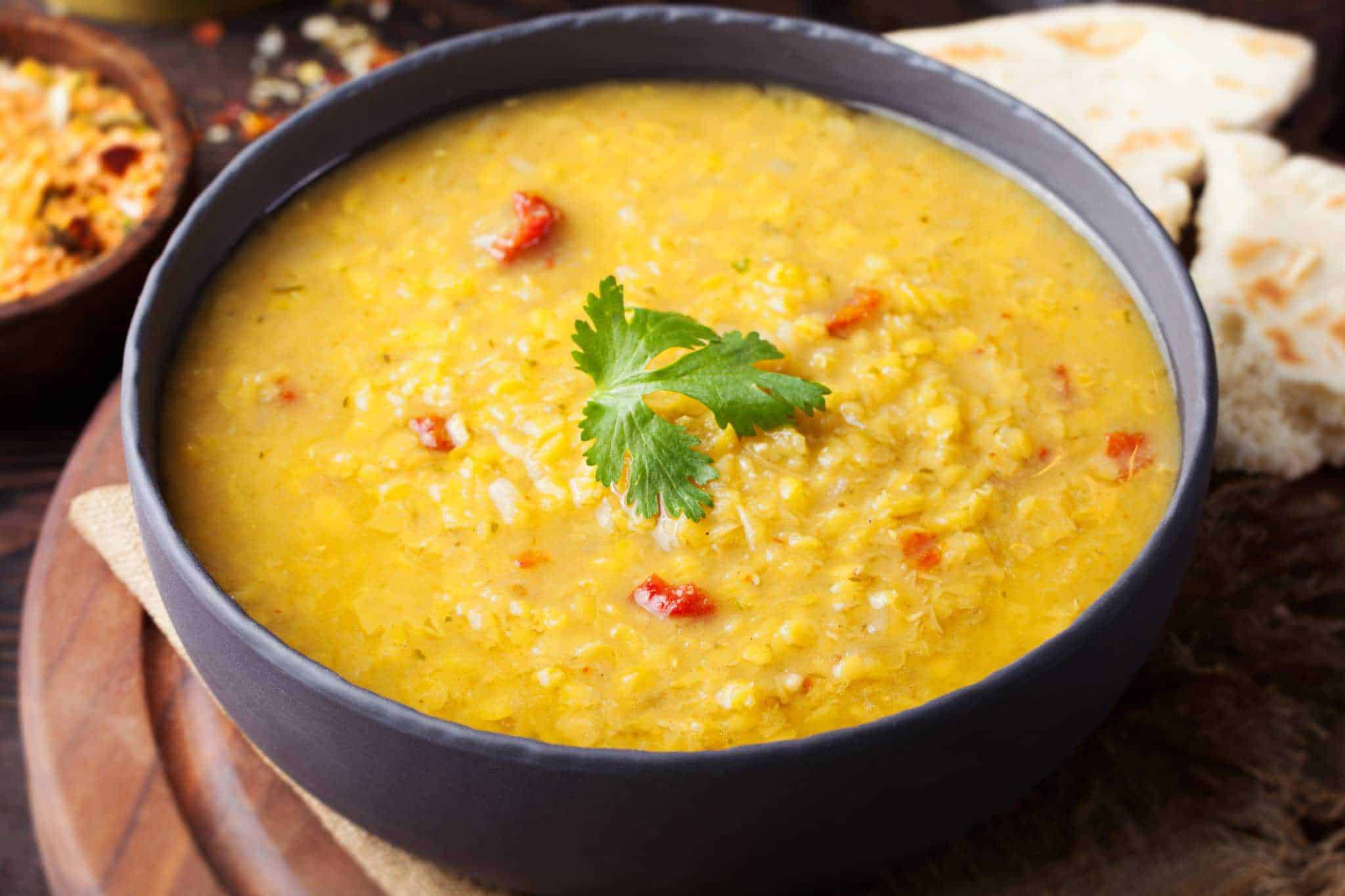 What are Red Lentils?

Red lentils can be found in a few varieties and they come split.  Unlike green/brown lentils that retain their color and shape while cooking, red lentils actually turn yellow and they disintegrate, making for a thickened “creamy” textured dish. You can find them in many well-stocked grocery stores (sometimes they’re in the health food or bulk food sections) and you can also find them here on Amazon.

We love these red lentils so much that I made a thicker version of it as a dip for dunking with naan.  It makes a fantastically delicious dip!  Try our Indian Red Lentil Dip.

First prepare what’s known as the Chaunk, or the spices that will go into the dish.

Heat the oil in a small skillet over high heat and add the mustard and cumin seeds. Fry until the mustard seeds begin to pop, about 10 seconds.

Reduce the heat to medium-high and add the chilies, garlic and ginger. Fry for another 20 seconds. Add the onion and fry until soft and a light caramelized brown, about 5-7 minutes.

Add the turmeric, chili powder, asafoetida, coriander, turmeric, chili powder, cinnamon and cloves and stir to combine.  (These ground spices can instead be added to the soup instead of to the whole spices in the pan.  I’ve done it both ways but have found that adding them briefly to the pan will further coax the flavor out of them.) 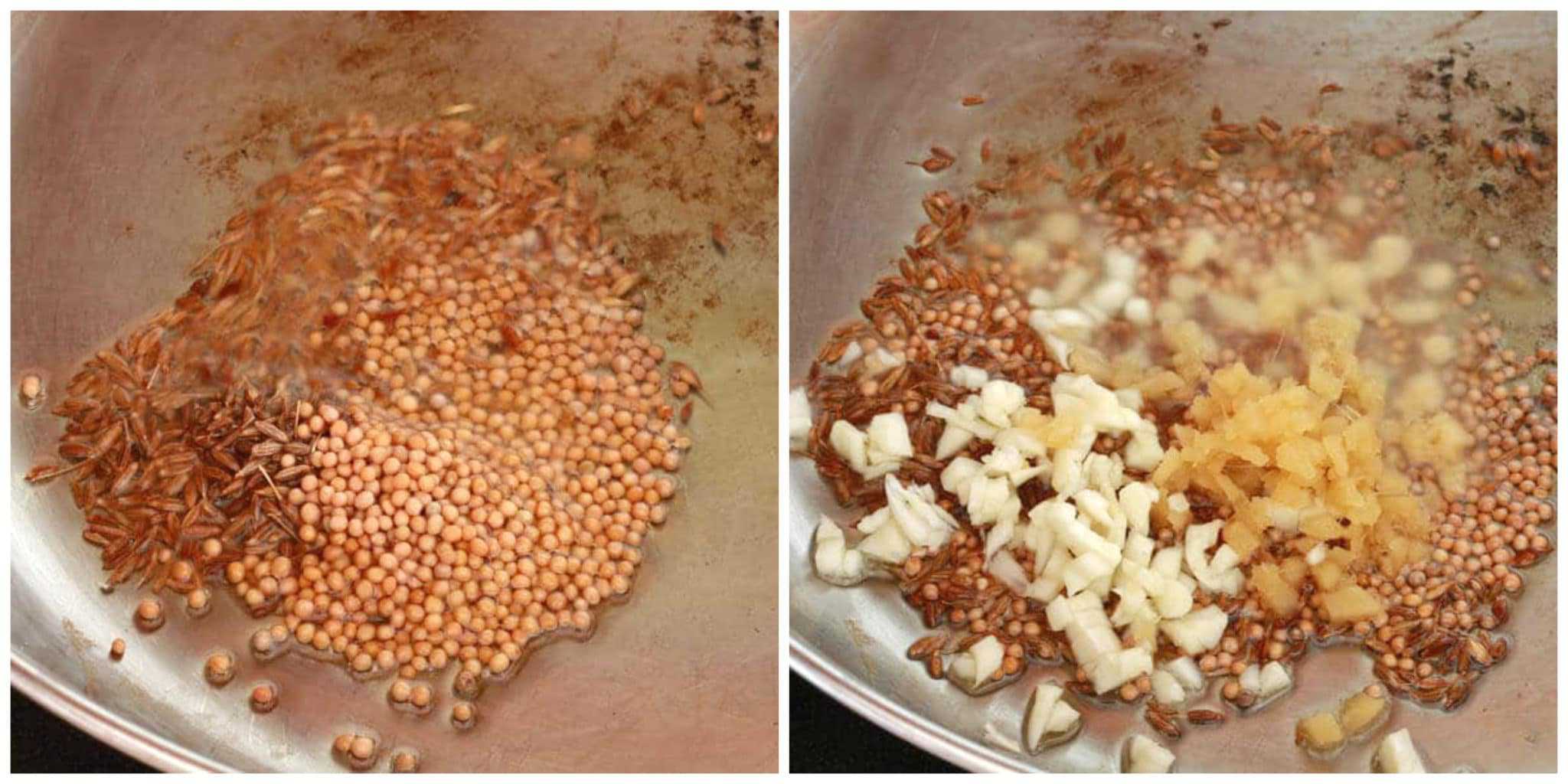 Rinse the lentils and place them in a stock pot with the vegetable broth, tomatoes and salt.  (Note:  Traditionally water is used, not broth, but we prefer using broth for the added flavor.)

Add the spice/garlic/ginger mixture to the stock pot.

Stir to combine.  Bring the lentils to a boil, reduce the heat to medium-low, cover and simmer for 20 minutes or until the lentils done.  Add salt to taste. 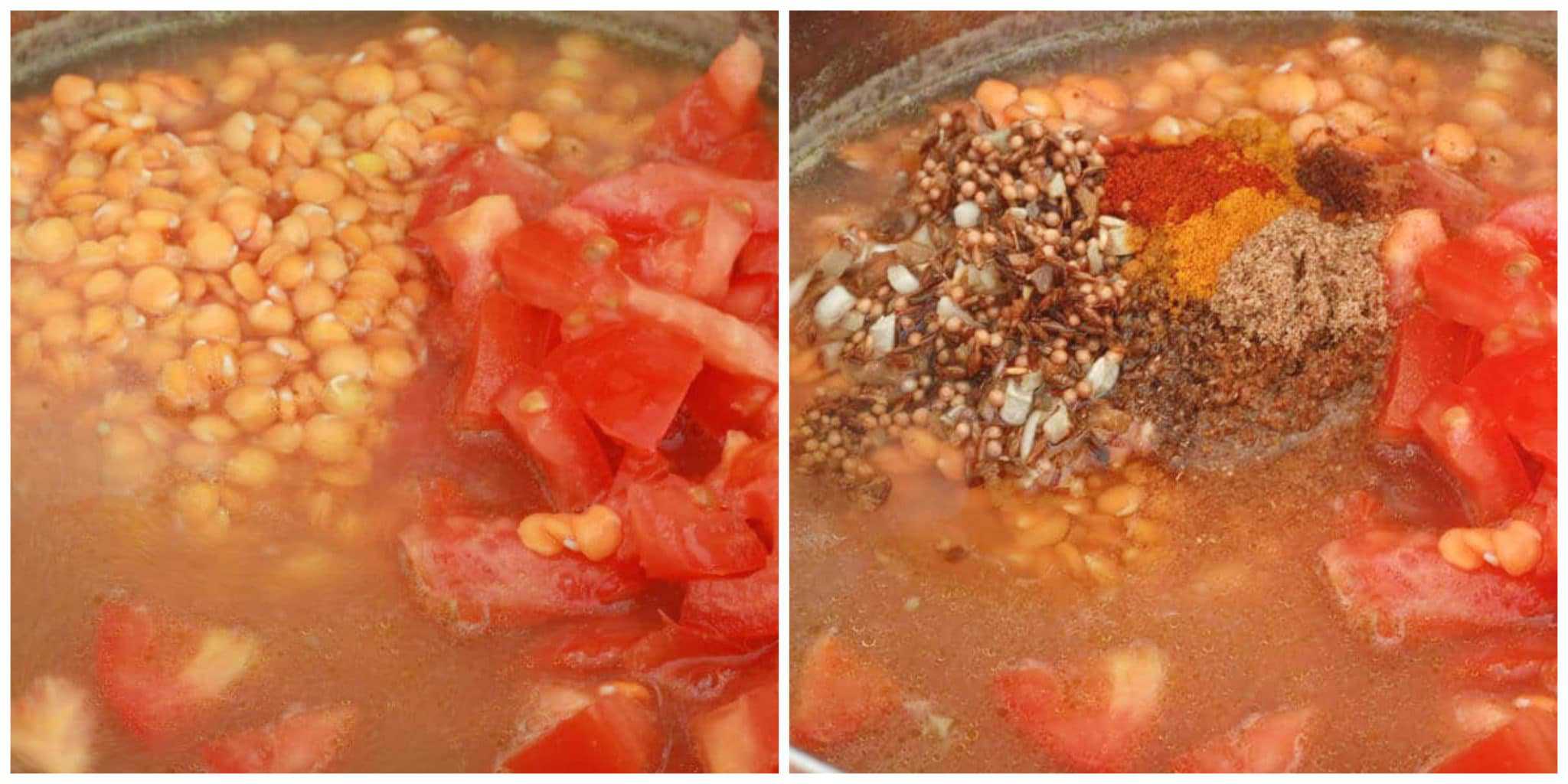 Before serving, add the lime juice, a little at a time, according to taste. Add more salt as needed. Serve sprinkled with fresh chopped cilantro.

Serve your Masoor Dal with some fresh naan, rotis or chapatis. 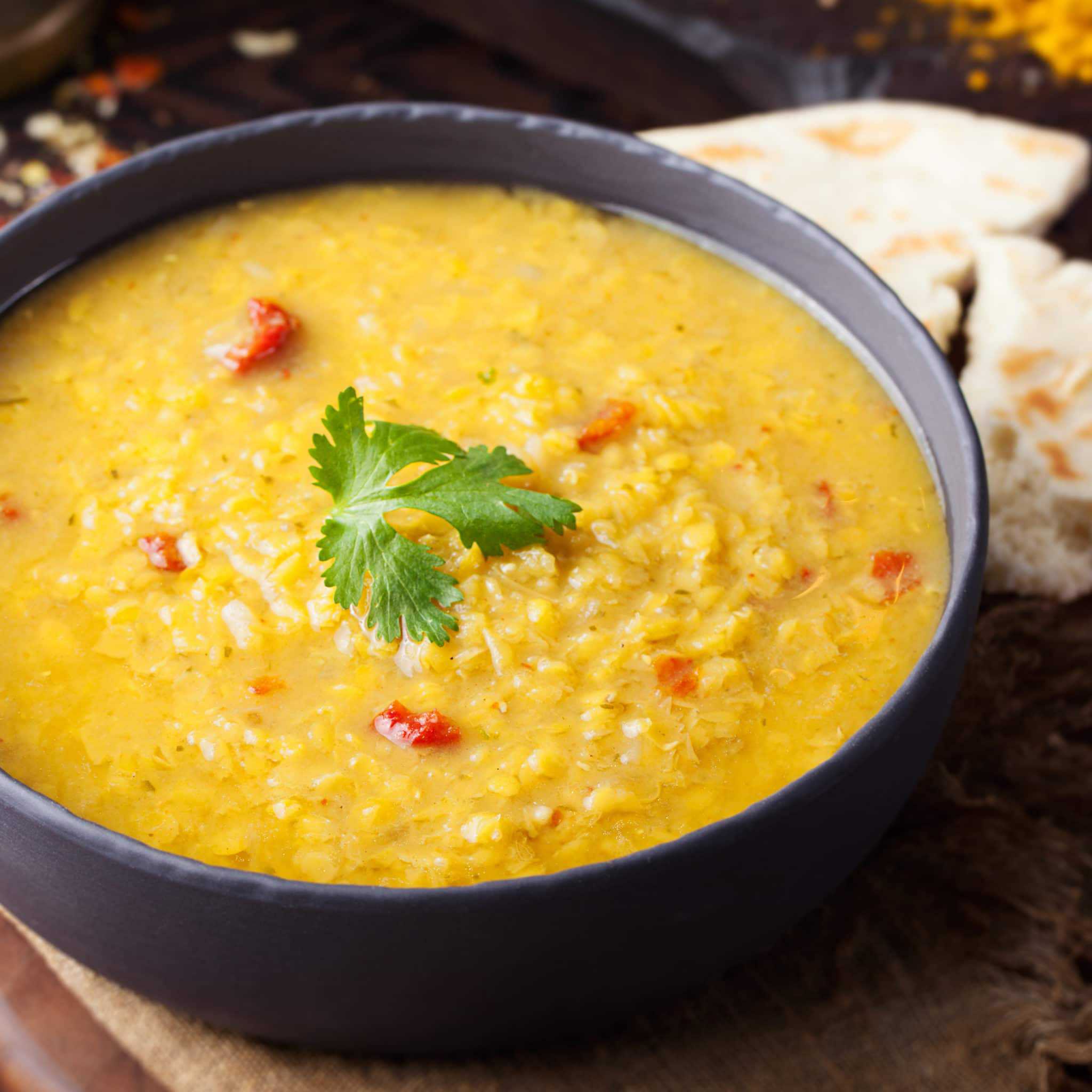 For more delicious Indian recipes be sure to try our: 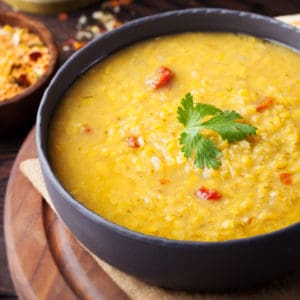