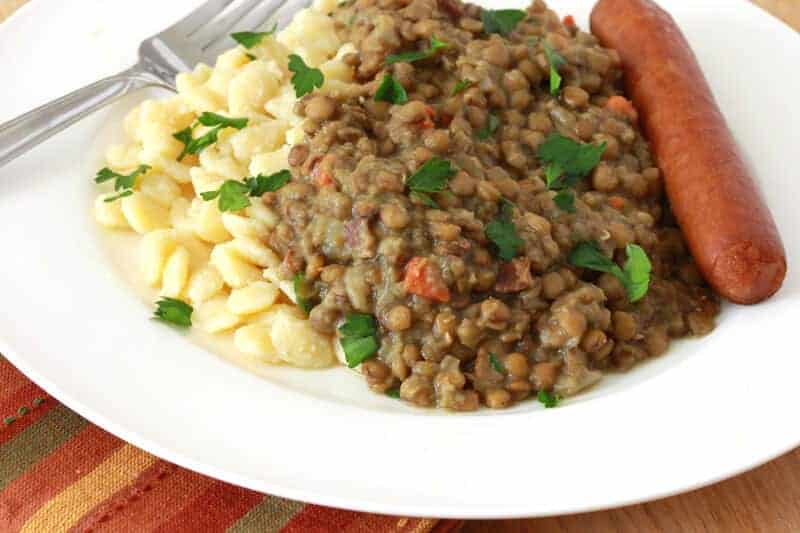 If the national dish of Swabia were put up for vote, Schwäbische Linsen mit Spätzle would certainly be one of the finalists.  This was always one of my favorite dishes growing up and any time I make it now it’s a nostalgic experience.  If you’ve lived in southern Germany and have enjoyed the food down there, you’ll find yourself transported back as soon as you take a bite of these lentils.  The flavor and aroma will remind you of your time there.

This German comfort dish is full of protein-packed lentils, bacon and vegetables.  This dish is not a soup, rather it’s more like a very thick stew that’s served over traditional Swabian Spätzle along with German Saitenwurst (long, thin German sausages that taste far superior to hot dogs).  You can either make Homemade German Spaetzle or use store-bought.  It’s generously seasoned with vinegar and the delightful tangy flavor of these lentils is the distinguishing hallmark of Swabian lentils.

Linsen mit Spätzle (also referred to as(süß-saure Linsen, aka sweet-sour lentils).can be found in many restaurants throughout Swabia, it’s a popular dish in many work and university cafeterias, and is a household favorite in Swabian homes.  Easy to prepare, filling and delicious, it’s easy to see why it’s practically a staple of Swabian cooking. 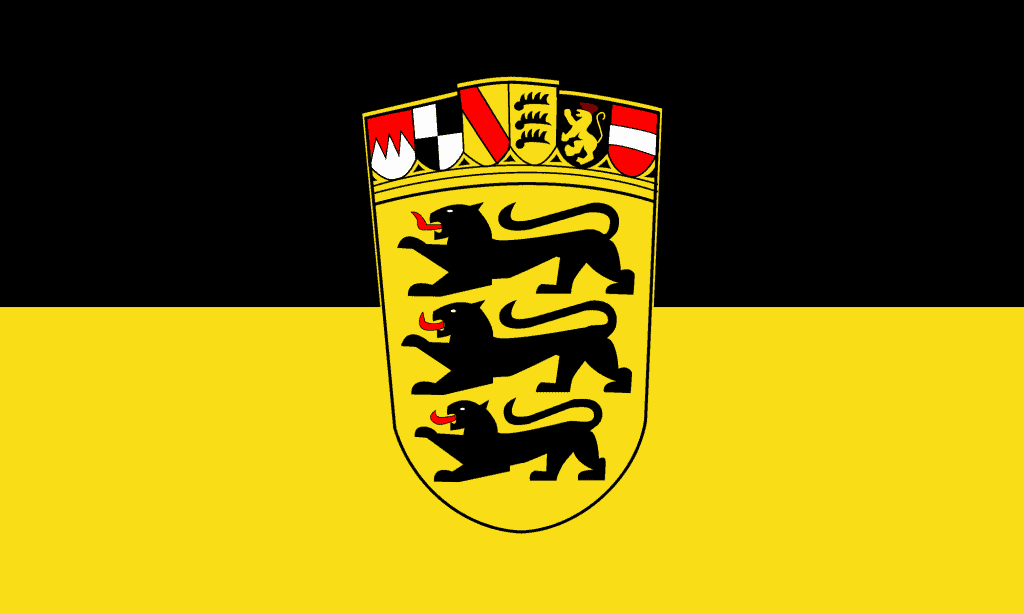 The flag of Baden-Württemberg

Swabian-style German Lentils with Spaetzle is one of those dishes that tastes even better the next day after the flavors have had time to meld.  It also freezes quite well, so feel free to make a double batch.

You’ll need a pound of lentils.  Unlike many other legumes, lentils don’t need to be soaked overnight.  Just give them a rinse and they’re ready to cook. 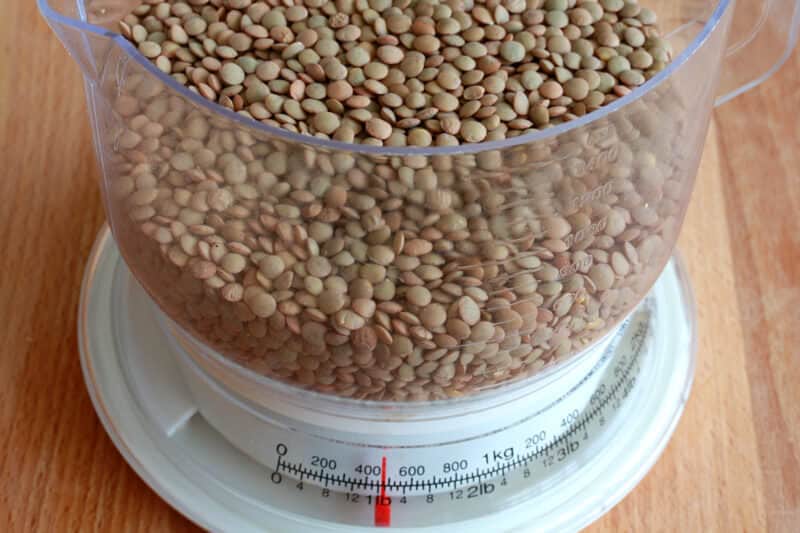 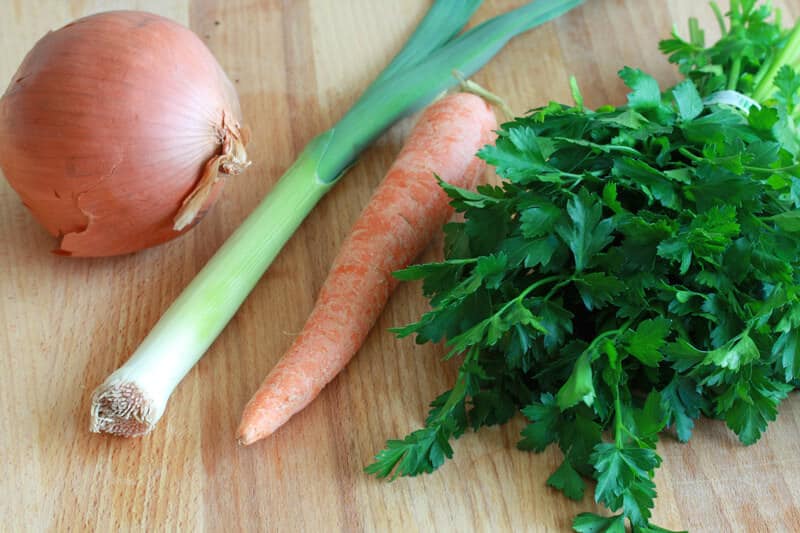 To get started, in a soup pot or Dutch oven, fry the bacon over medium-high heat until done. Don’t discard the bacon grease, we want that for flavor.  Add the onions and cook until soft and translucent, 5-7 minutes.  While the onions are cooking, you can dice the carrots and leek.  You’ll want them diced small.  Be sure to thoroughly rinse and drain the leek as they’re notorious for collecting and hiding dirt within their layers.  Add the butter, carrots and leek and cook for another 5 minutes.

Add the lentils, broth, bay leaf, salt, pepper and sugar and bring to a boil.  Reduce the heat to medium, cover and simmer for 40 minutes or until the lentils are soft and have absorbed most of the liquid (the lentils should be thick).  Add the vinegar and parsley and simmer for another 5 minutes.  If it’s too thick for your taste, add a little extra beef broth. 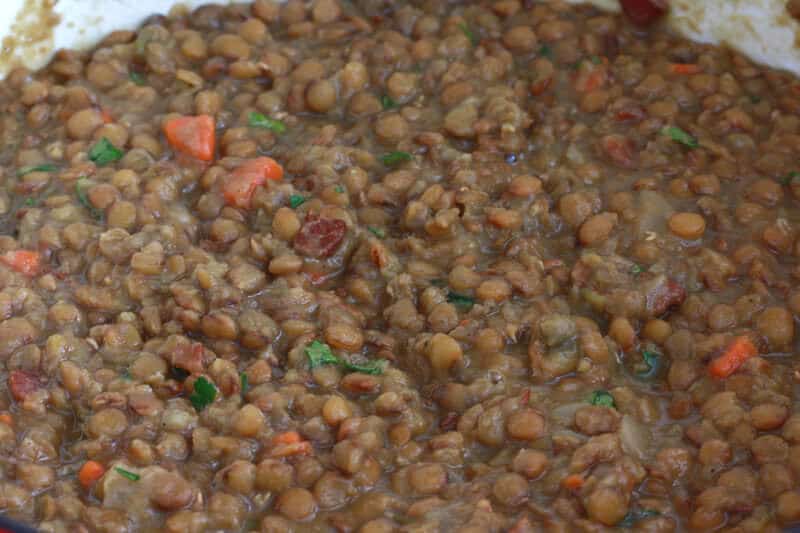 Serve over store-bought or Homemade German Spätzle.  Traditionally served with German Saitenwurst, which are near impossible to find here in the U.S. unless you live near a German deli – so just serve with your sausage of choice. 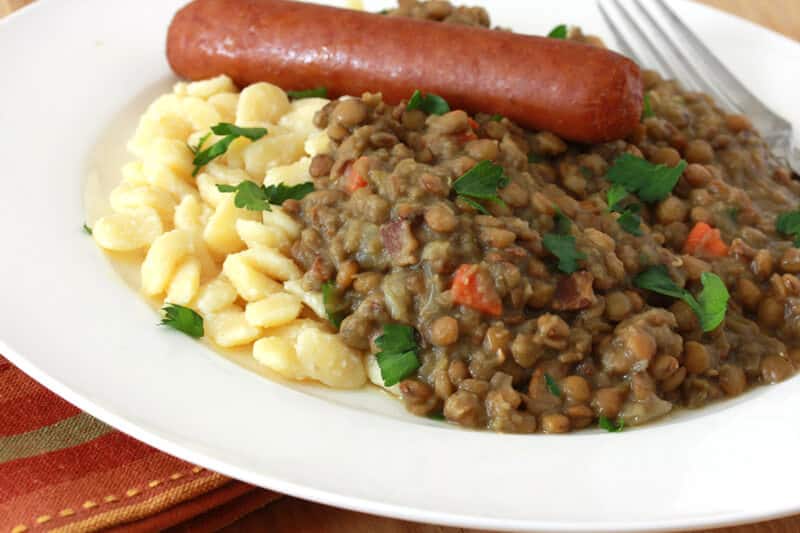 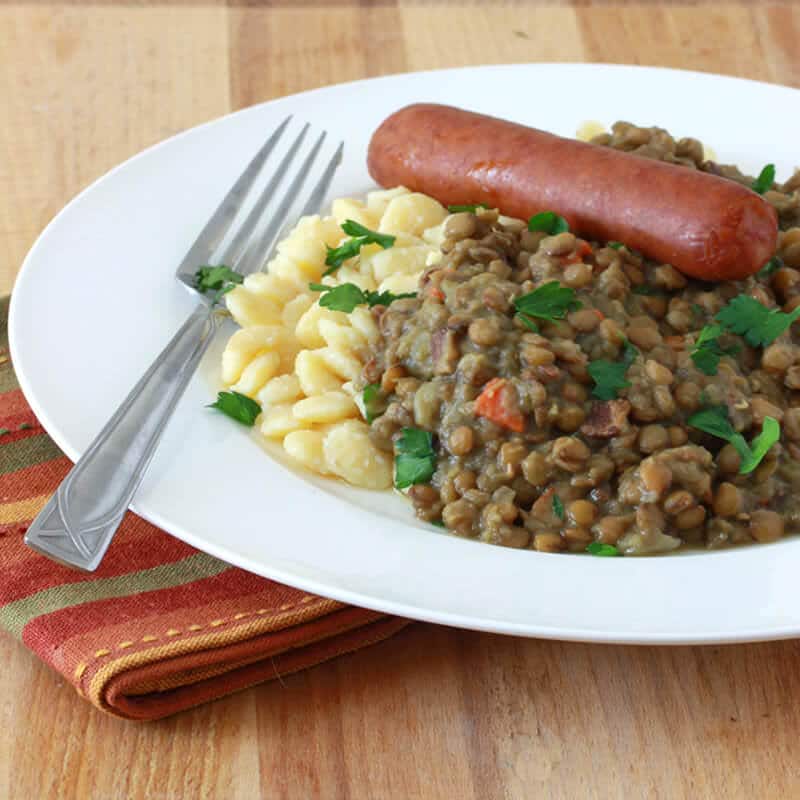